Madhuban, literally the ‘forest of honey’, lends its name to a region in Bihar and an art form whose origins are buried in legend. The Mithila painting tradition of Madhubani began among Maithil Kayastha and Brahmin families, where women would come together to paint murals on the walls of their homes. The art is believed to have originated in the kingdom of King Janaka of Maithil, who ordered all his subjects to decorate the city’s walls for the wedding of his daughter Sita with Rama. This form, like many indigenous arts, serves both a ritualistic and decorative purpose. However, it is one of the few Indian traditions that are passed on through women: from mother to daughter and from mother-in-law to daughter-in-law.[1]

To me, it’s no surprise that the composition of these paintings includes an abundance of flora and fauna motifs. If I were asked to paint the wedding ceremonies of Goddess Sita, Mother Earth incarnate, in the forest of honey, I too would populate the canvas with nature’s most beautiful creations. Mithila or Madhubani art uses flowers and animals to symbolise the abundance of nature and celebrate the sacred union of male and female. 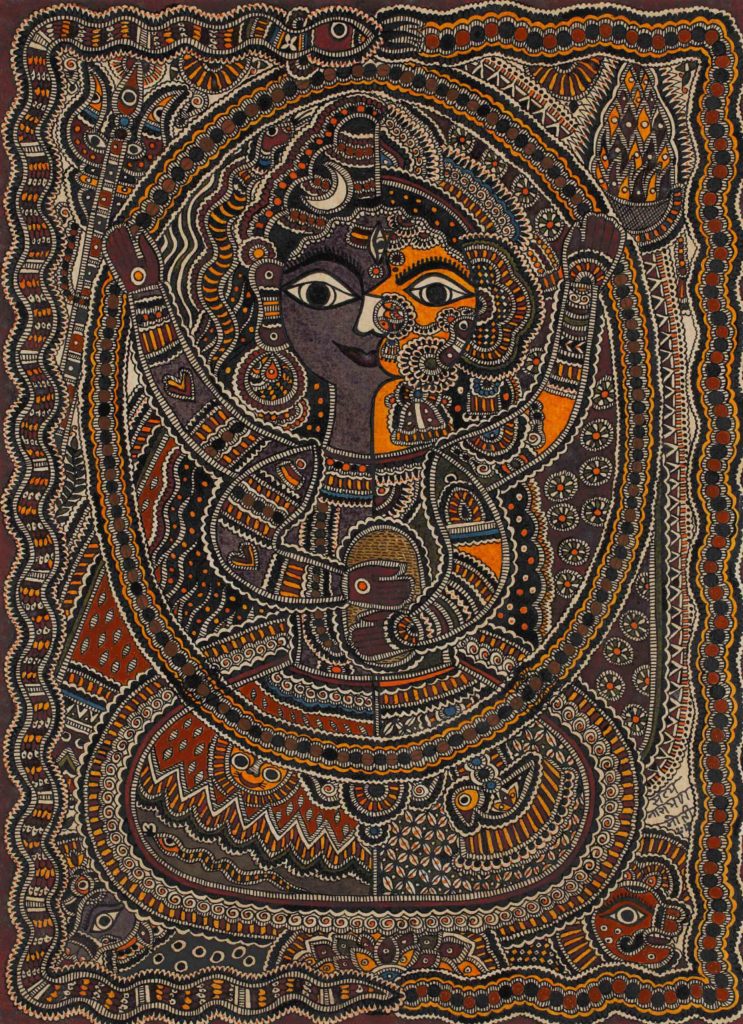 One of the most striking and important painting compositions in this style is the puren or lotus and kamalban or bamboo staff combination found in the Kohbar Ghar, or the bridal chambers where a newlywed couple spend their first few nights. The murals painted on these walls are called Kohbar. The lotus in these paintings typically have seven buds: one in the centre and six surrounding. The buds are often intricately detailed and shown with their stalks intertwined. Sometimes they also feature a female face. Going through the central bud of the lotus is a bamboo staff, the upper end featuring a male face. The lower end rests on a semi-circular platform. This composition represents the union of a man and a woman; the puren is considered the symbol of fertility, a stand-in for the yoni, while the kamalban is considered the symbol of virility, or the lingam.

The people of this fertile land have observed that if one plants a single lotus in a pond, soon the entire pond is filled with blooms. Thus, the Kohbar symbolises the fecundity of the earth in the hope that the couple who spends their first nights in front of it will be similarly blessed. Around the puren and kamalban are other symbols of fertility as well, like the fish, snake, tortoise and peacock. These are benedictions of a kind, a prayer that the bride will go on to enjoy healthy childbirth.[2] Traditionally, the Kohbar was always drawn in red because the colour is considered auspicious for married Hindu women.

While Mithila artists experiment with contemporary subjects and materials, some specialise in creating works using only natural colours. I spoke to second-generation Mithila artist Jyoti Karn, who was schooled by her mother and later by her mother-in-law, the award-winning artist Moti Karn. Jyoti explained how each colour is made painstakingly by hand. The basic process is the same for all. The flowers are crushed by stone and mixed with natural gum. This paste is then left for 1-2 days to rest, after which it is strained through a cloth and then becomes ready to use. The longer the paste is rested, the darker the resulting colour. Sourcing the flowers, however, is a skill in itself. 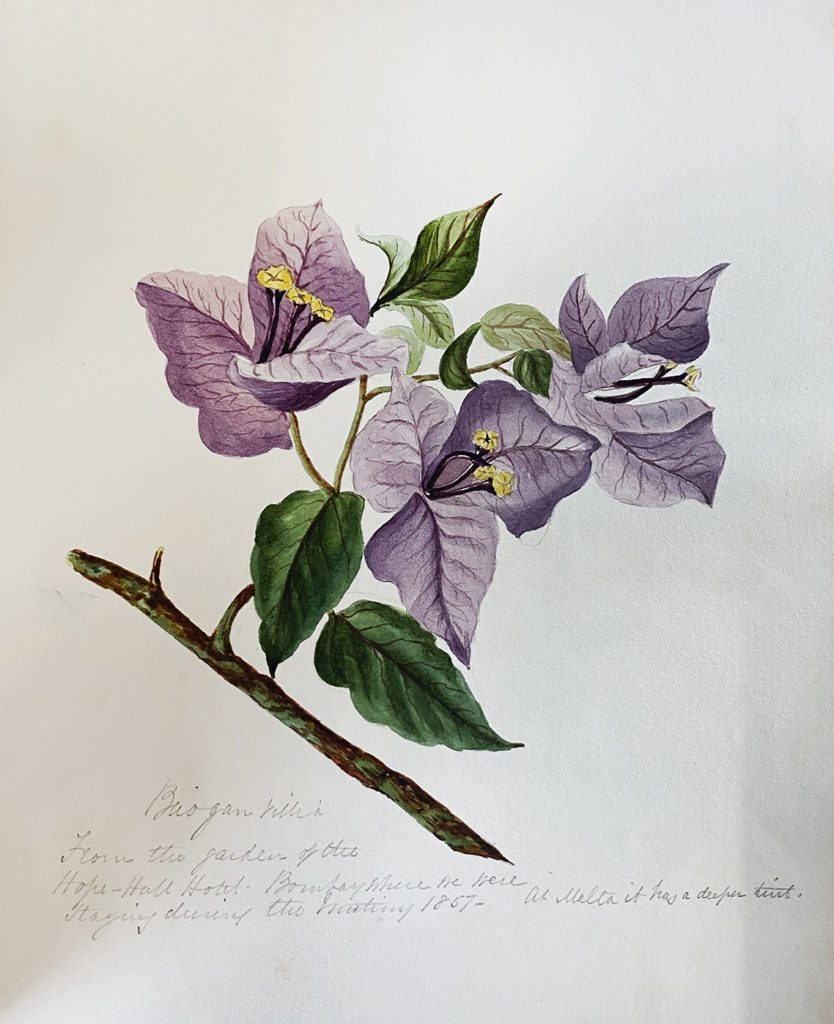 Bougainvillea from the rare book, ‘Flowers of Bombay Presidency’, 1884 by Mary Elizabeth Butt and William Butt

Bougainvillea for red and pink

Bougainvillea flowers are used for red/ pink colour. Commonly known as ‘paper flower’ these are ornamental vines, bushes or trees which are commonly seen on hedges of house entrances. These vines are evergreen in rainy areas and deciduous in dry areas, once planted they flourish very easily and quickly. The flower of the bougainvillea is small and white and is not used to make the colour for paintings. But around the flowers are three to four bracts (modified leaf or scale) , these bracts are the carrier of pigment and are used in the colour making process. Bougainvillea comes in many colours: pink, magenta, purple, red, orange and white. [3]

Interestingly, Bougainvillea was named after a female botanist Jeanne Baret. Jeanne Baret was the first French woman to travel on a Navy ship. She disguised herself as a man and with the help of her lover, Phillipe Commerson, also a botanist, was able to go on a world exploration. The genus name of Bougainvillea was originally ‘Baretia’, which was later changed to ‘Turrea’.[4] 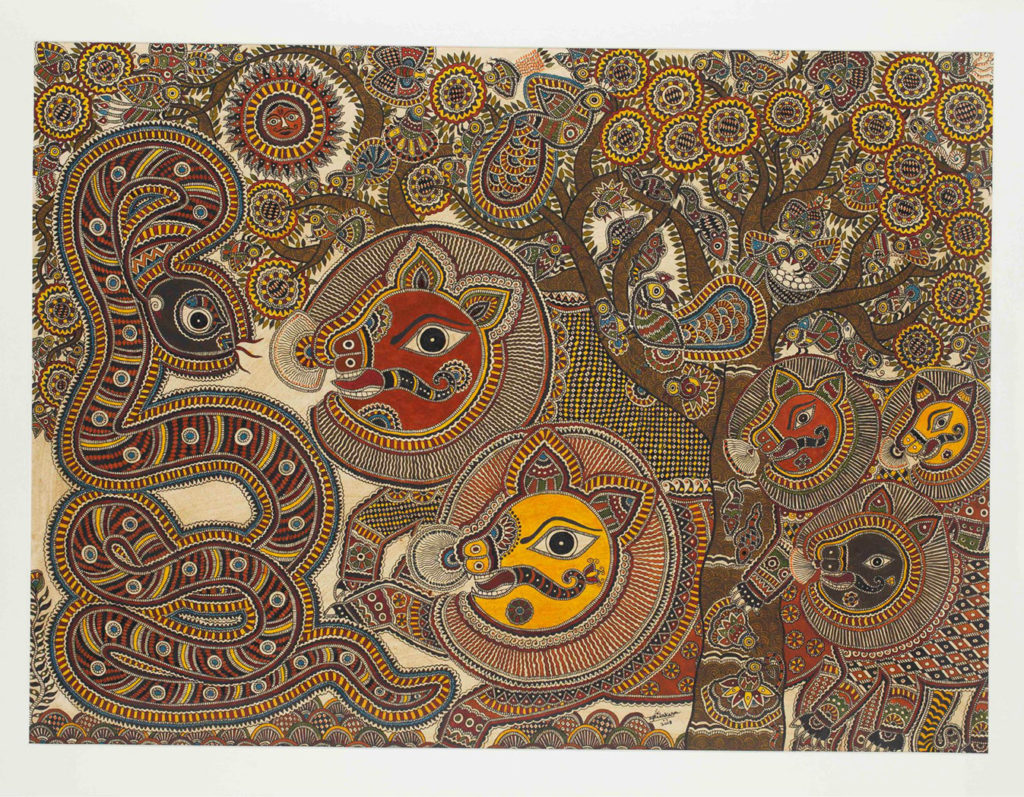 Aparajita flowers are used for the colour blue. Aparajita is a Bengali word meaning ‘the undefeated’ and it’s another name for Goddess Durga. This flower is considered holy in India and used for pooja rituals in the northern states. The flower is a bluebell vine flower that carries the genus name Clitoria Ternatea. It gets this name because of a pea-like structure in the upper centre from where the petals curve outwards, resembling female genitalia. 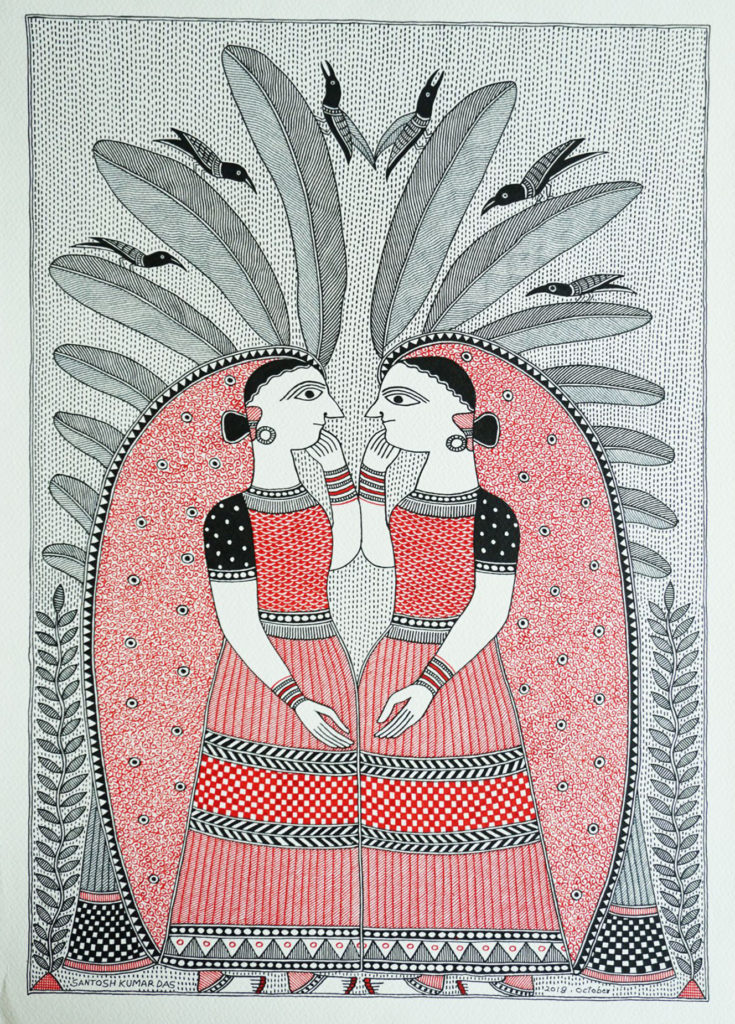 Palash for red, orange and yellow

Palash flowers are used for the colour red/orange and yellow. Palash is a common deciduous tree found in West Bengal, Jharkhand, Orissa, Bihar, Telangana and Andhra Pradesh. It blooms once a year between January and March, marking the arrival of spring. The flowers are either orange or bright red in colour. They grow very close to each other on an axis, like they’re arrayed in a bouquet. [5] Palash is commonly known as the ‘flame of the forest’ because when the orange and red clusters of flowers bloom in the spring, the forest looks ablaze with colour. Palash features prominently in the folk literature of West Bengal, Jharkhand and Bihar.

Palash is popular in different regions of India for different reasons. In West Bengal, the town Palashi is named after the tree. It’s located in district where the decisive Battle of Plassey took place in 1757; Plassey being the anglicised version of Palashi. Thanks to this history, the tree is also called ‘the tree of fire and war’. In Telangana, Jharkhand and Bihar, the festival of Holi is celebrated with palash flowers. 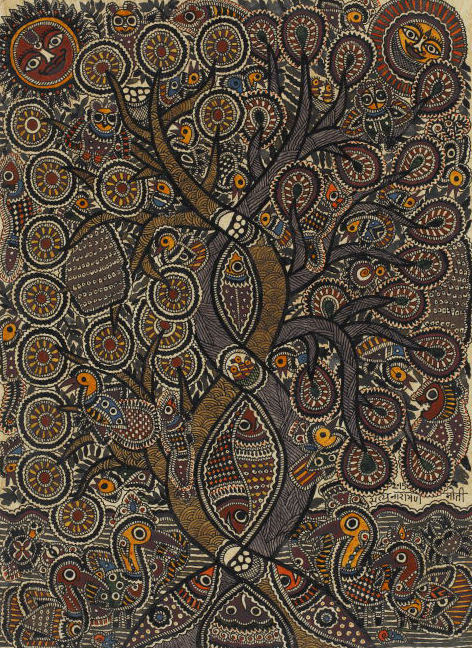 As I learned about each of these flowers, I was surprised at the connections I could make between them and the art form. The bougainvillea to me represents a story of firsts: Madhubani is the first indigenous art form recognised as having a matrilineal order, and Jeanne Baret was the first woman botanist to have a flower genus named after her. Aparajita comes clothed in a sacred fragrance. The flower is used in prayer rituals, as are the lotuses in Mithila paintings that carry its colour. Palash connects the world of images to the world of words. The region of Madhubani is named for the sight of an orange/red forest dripping with nectar in spring; and the art is named for the place. I know some of these connections are nebulous and fragile. But like flowers that bloom and wilt in a matter of hours, they too might hope for immortality through the art of Mithila.