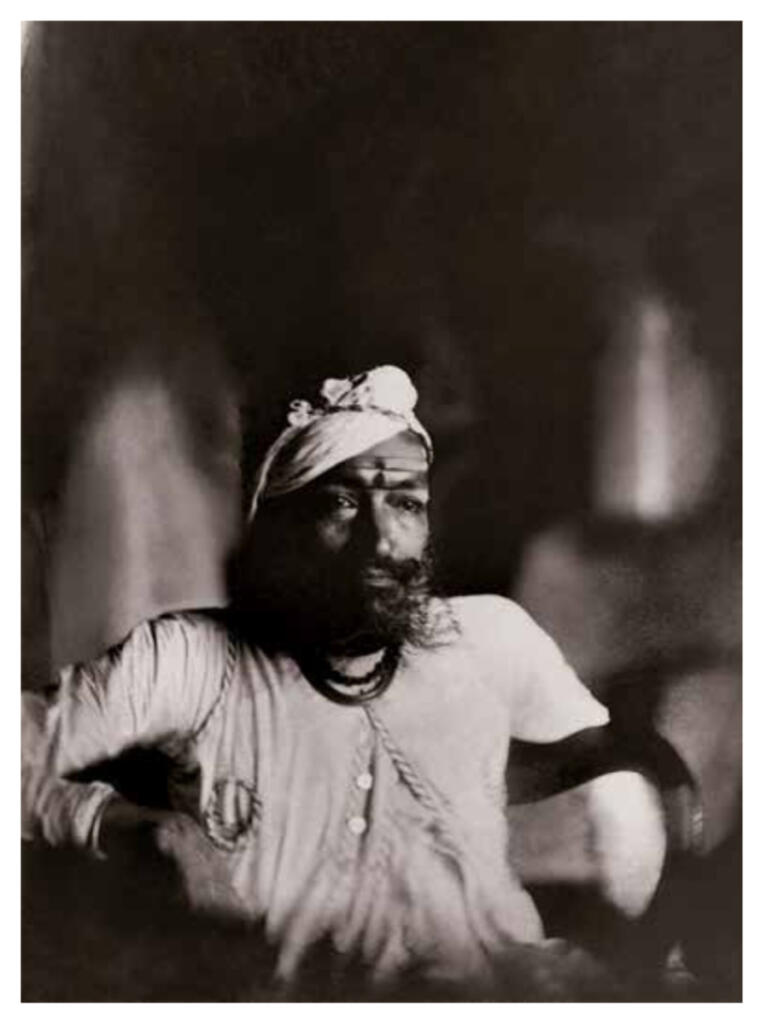 “We can build a picture of Sawai Ram Singh’s interior life through his self-portraits,” says Aparna Andhare, Curator of Maharaja Sawai Man Singh II Museum, located in the spectacular premises of The City Palace, Jaipur. The Museum houses an important collection representing the artistic, cultural and political history of the Indian subcontinent dating back to the 18th and 19th centuries. Among the many gems in its archive is the photography produced by Maharaja Sawai Ram Singh II, one of the very early adapters of the medium in India, and one with a natural talent for creating iconic portraiture.

We spoke to Andhare to get a measure of the Maharaja’s influence and legacy. His photography is adept at both capturing the personalities of the heavily veiled inner circle of the zenana, and also giving us a sense of the man himself. How did he see the world? More importantly, how did he want to be seen and remembered?

Could you please outline for us the scope of the collection at the Maharaja Sawai Man Singh Museum? 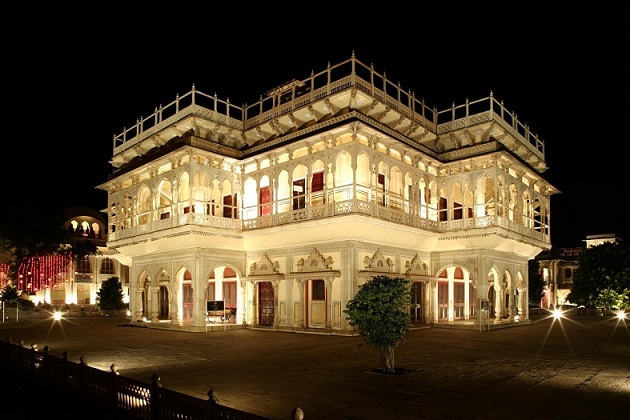 Mabarak Mahal at The City Palace, Jaipur—click for source

The MSMS II Museum is a custodian of art, material culture and architecture, predominantly from the 18th and 19th centuries, but wide in its geographical scope, covering Mughal India, Rajput and Deccani courts, and Europe. The late Maharajas of Jaipur, Sawai Man Singh II (d.1970) and Sawai Bhawani Singh (d. 2011) bequeathed parts of the courtly collection to create and expand the museum. The Museum holds arms and armour, textiles, manuscripts, objects, paintings, photographs, and photographic equipment, among other things. Housed at the historic 18th-century City Palace of Jaipur, architecture is integral to the museum, since our famous courtyards, halls of audience and parts of the palace — like the 19th-century Mubarak Mahal — have been turned into galleries. The Museum Trust also looks after the Chhatris (memorials) of Amber and Jaipur rulers, and a separate site commemorating later Maharanis of Jaipur.

You have a priceless photography collection that is of great interest to historians and enthusiasts — which would you say are the highlights?

In addition to portraits and self-portraits by Maharaja Sawai Ram Singh II (r.1835-1880), the pictures he made of architecture of Jaipur, are an invaluable archive of the city. Images of the city from vantage points like the Isarlat (a victory tower built by Sawai Ishwari Singh in the 18th century), can help us map the way the City Palace and Jaipur evolved. He also travelled to Calcutta, and other Rajput and imperial capitals, where his pictures of the people and places he encountered (many buildings he photographed no longer exist), offer us a window into his world. A selection of these are on display in the gallery, but many more remain for us to share. 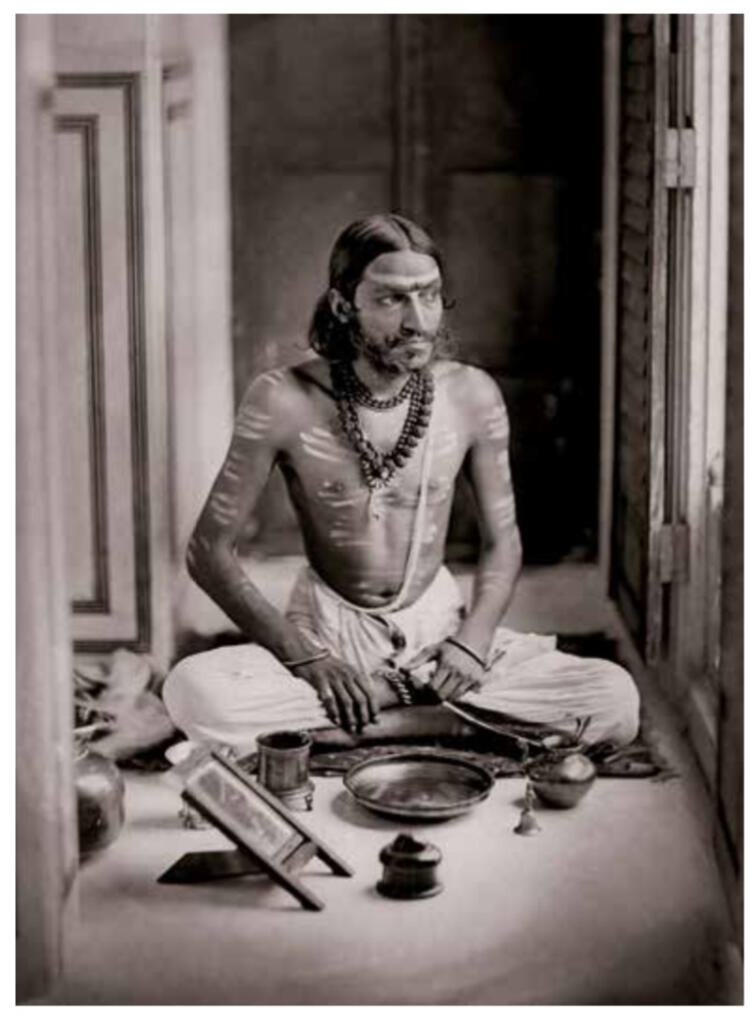 What aspects of Maharaja Ram Singh’s personality would you say made him a natural photographer?

We can build a picture of Sawai Ram Singh’s interior life through his self-portraits. He comes across as a thoughtful person who intuitively understood the power of iconography and images. One is disarmed (and charmed) by his brooding self-portrait, in which he presented himself simply, devoid of regalia, and slumped against his chair. The stance is completely different when he photographed himself as a Shiva worshipper, a powerful image on its own, that transforms into a significant political statement given the tensions between the court and Vaishnava sects in the kingdom at the time. He was erudite, a patron of theatre (he established the Ram Prakash Theatre), and must have had an eye for detail since he developed and printed his own images. The way he juxtaposed props (including pets!) and people also suggests he had a sense of humour.

For the uninitiated, how would you describe the majority of Ram Singh’s photographic subjects?

In broad terms, the photographs are evenly split between portraits (of people, that is) and landscapes (including buildings). At first glance, Sawai Ram Singh’s portraits seem the most pioneering aspect of his output for its choice of sitters — only a maharaja could convince (or coerce) the ladies of the zenana to pose. He also made (and probably acquired) photographs of his courtiers, and Europeans in the subcontinent, including in “native” costume. But as mentioned before, his photographs of places are remarkable too. The collection is quite eclectic – at times he also reproduced other photographs and works of art. 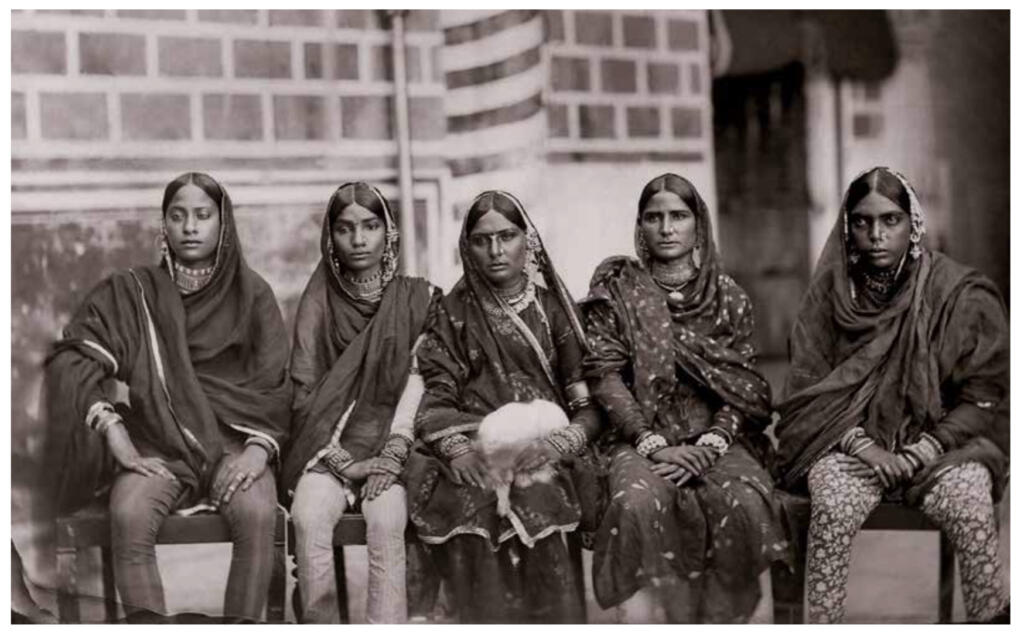 Among his work, the zenana portraits are still astonishing today for giving us a peek behind the royal purdah. What sort of reactions do you see to these photos from visitors to the Museum?

The reaction to these pictures is usually surprise and awe! Several guests are interested in textiles. They respond to the outfits, looking closely at the prints like the leheriya, and of course, jewellery too! We are all drawn to these mysterious figures, who are at times playful, and often serious.

Besides taking us behind closed doors, what other critical function do you feel the zenana portraits accomplish?

In addition, as you say, to allowing figures from behind the purdah to step into the light, they are a valuable repository of textile and material culture histories, and an important resource for piecing together social histories of the 19th century, especially of women. 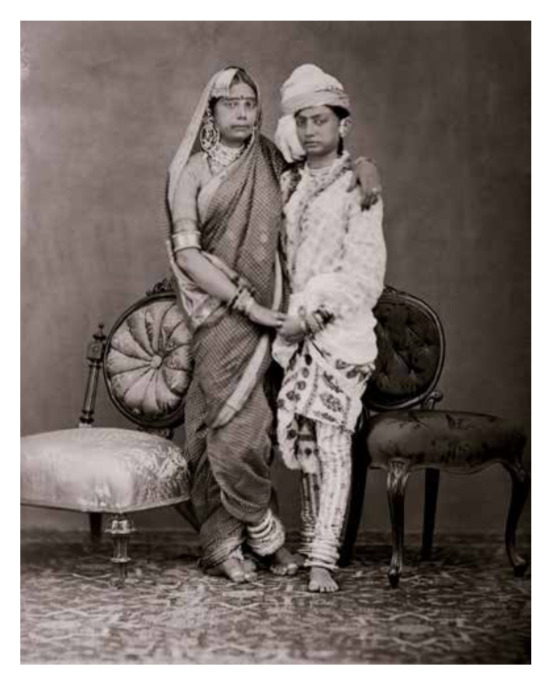 Could you point us to some of best specimens of the zenana portraits and tell us what makes them stand out from the rest?

Personally, I’m quite intrigued by the image of a pair in embrace, where a woman has dressed as a man. Did they do this often? Were they putting on a show? There are so many questions that the image raises.

While this sub-genre has been mined for clues to the personality of the photographer, do these photos also tell us anything about the personalities of the subjects? Are there clues in the frame as to who these women were or what their talents or interests might have been?

The zenana portraits challenge a popular belief that women had no agency inside the palace — which is absolutely not true. The zenana was a complex space, with a power structure of its own, run by independent and wealthy queens who were patrons in their own right. The women in the portraits are not queens but lived in the zenana, and may have been concubines or, it has been suggested, performers. We can make educated guesses about their biographies, by decoding costumes, and markings that indicate caste and regional identities. We have been lucky with an occasional named reference in travellers’ records, which adds to our narrative. A few women were photographed more than once, some in different costumes. They are portrayed in several moods from defiant to shy, and their own personalities shine through, even in group portraits.

Ram Singh’s zenana portraits are among the most examined of his oeuvre — which do you believe are his most underrated or understudied portraits?

We’re just beginning to explore Sawai Ram Singh’s practice so there is much to uncover even within the zenana portraits, including but not limited to the identity of the women he photographed. So, they are all understudied and underrated, despite the keen interest in them. 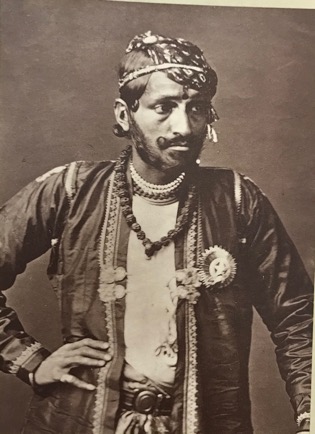 Another sub-genre of his works were the self-portraits in which he sought to tell us who he was, what he believed in and also take the chance to shed the kingly image and just be. Are we right in considering these as radical acts for the time for an Indian royal?

Since portraits were an important tool for articulating kingship, it was quite natural that photography too would be used effectively to communicate royal splendour. While most royal portraits were stiff and formal portraits, or documented events, Sawai Ram Singh allowed the camera into his private life, and turned his personal self into a subject too. But he also used the formal portrait to great effect to project himself as a modernising maharaja. Visitors often remark on his eclectic sartorial style, which fused elements of Indian and European clothing and accessories.

Which photographers or artists exerted the most influence on Sawai Ram Singh’s photography?

We still have much to discover about how Sawai Ram Singh learnt – or perhaps taught himself – photography. We know he met with other practitioners, either on his travels, or when they visited Jaipur. He was also a lifetime member of the Photographic Society of Bengal, and would have received the Journal along with the latest information, techniques, and ideas that others were using. So there is potentially a wide range of influences – and indeed, people he influenced in turn. The name of the Nainital-based photographer T. Murray comes up often, and there is a possibility that he was the court photographer at some point. Sawai Ram Singh also collected negatives by John Edward Saché, and other contemporary photographers. We must remember that photography was invented in Sawai Ram Singh’s lifetime, and so everyone was experimenting with this new technology.

Stylistically, how would you describe the portraiture of Ram Singh? Was he more aesthete or documentarian or something in between?

As he was an early practitioner of photography, it is difficult – if not counterproductive – to tie him to a genre or a specific kind of style. He understood the power of images and knew how to use props and iconography to make strong statements. He was as much an aesthete, as a documentarian, and experimenter with the medium.

Could you recommend any articles, books or sources to readers who want to read more deeply of the work and life of Maharaja Sawai Ram Singh II?

There are a few out of print publications from the 1980s when the collection was first shared with the public, but the most recent publication is our catalogue, Painting and Photography at the Jaipur Court (Niyogi Books, 2016), which is an excellent place to begin. You can see excerpts from Sawai Ram Singh’s diary, get a sense of his practice and more, in the essay by my colleague Mrinalini Venkateswaran. We add more as we learn more, so you will find a different take in the catalogue text by Rahaab Allana, Giles Tillotson and Mrinalini to accompany the exhibition, A Reflective Oeuvre: The Pioneering Photographs of Maharaja Sawai Ram Singh II (2019).

Finally, what has MSMS II Museum been up to during 2020? Please tell us a bit about your most exciting programs online during the lockdown. What can visitors/fans look forward to in 2021?

The lockdown has been a challenge and learning experience for us, as it has been to others. But after months of living life on social media, visiting in person has stayed as important as ever. We’re gearing up to open a new transport gallery, which has been delayed by the pandemic, in addition to new publications and interactive features, both online and in the Museum. We look forward to collaborations, outreach events, and having our visitors back in the Palace!