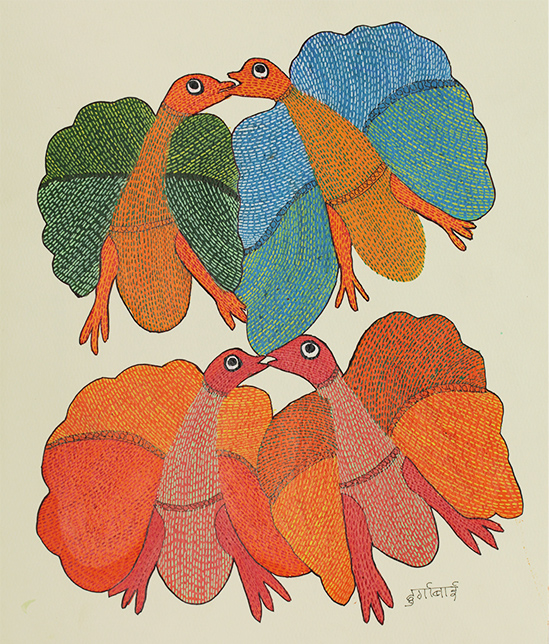 Life came a full circle for Durgabai Vyam at the Kochi-Muziris Biennale this year. As a young girl, she cut her teeth on the art of digna, ritualistic geometric drawings made by the women of her community, the Gond Pardhans, on the walls of huts in rural Madhya Pradesh. Many years, many paintings and many awards later, Durgabai turned her attention back to her first canvas. At the KMB 2018, she and her husband Subhash Vyam filled the walls of a large, high-ceilinged room in Aspinwall, Kochi with bits of plywood painted with a story from Gond mythology called Dus Motin Kanya aur Jal Devta.

Durgabai has a talent for storytelling that bursts out of carefully prescribed margins and splashes joyfully onto the upturned eye. It’s a genius that runs in her blood—her ancestors were the bards and genealogists of the Gonds, the keepers of stories and histories. Unlike them, Durgabai found a medium that took her places. She is the contemporary, and the cousin, of Jangarh Singh Shyam, the breakaway star of Gond art who first took the leap from clay and stone to paint and paper. While Jangarh left a trail of unseen gods and fantastic beasts for astonished audiences to mull over, Durgabai created a more playful, universal language. 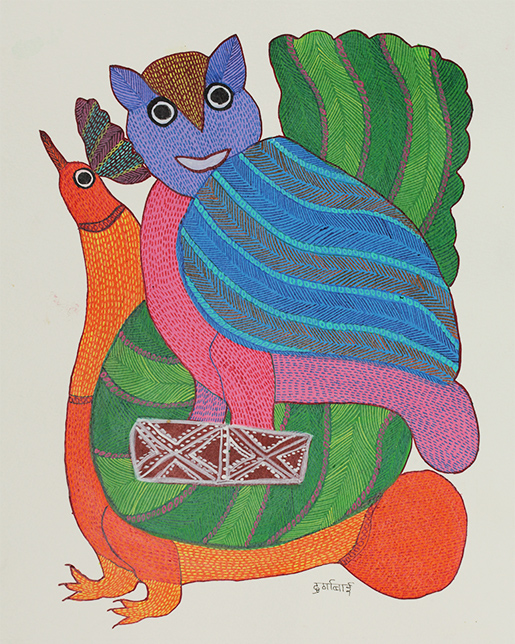 Her paintings are filled with colour and movement. They speak to the child inside all of us and encourage it to come out and play. The animals of her world seem like the perfect playmates. Birds have eyes sparkling with kindness and curiosity, enormous deer gently touch noses with miniaturised versions of their predator the fox, elephants nimbly toss each other up in the air. There’s a quiet humour here too, in the surprised gaze of a bird at an elephant with two heads or in the expression of a cheeky bat that hangs off the antlers of a barasingha. 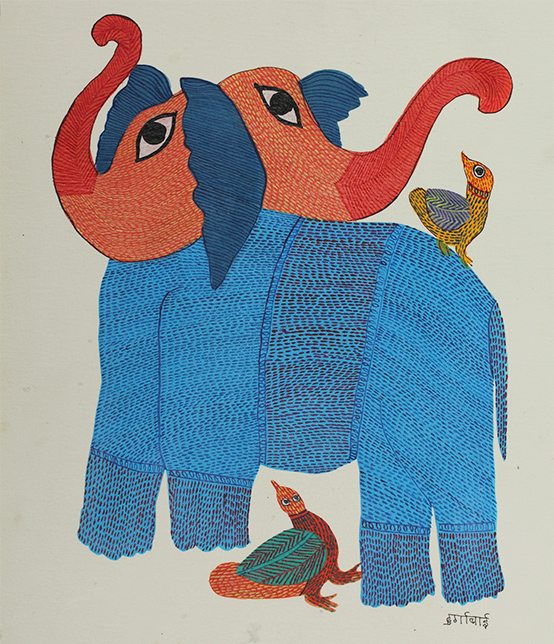 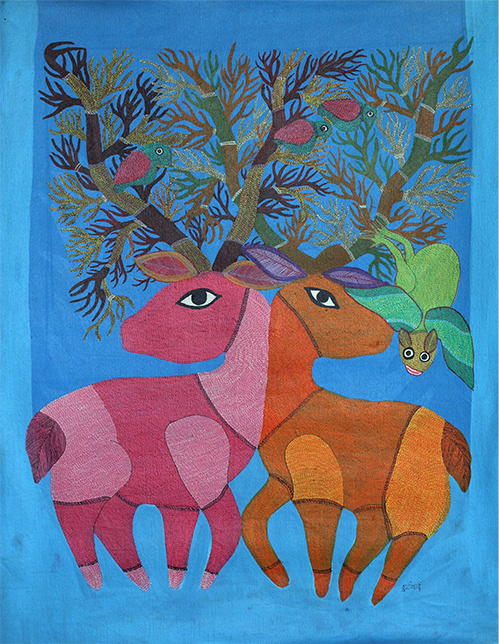 This gift for storytelling was honoured in 2008 by the BolognaRagazzi Award, which recognises the best graphic and editorial production in children’s literature. Durgabai won it jointly with two other Gond artists, Ram Singh Urveti and Bhajju Shyam, for their illustrations in The Night Life of Trees. 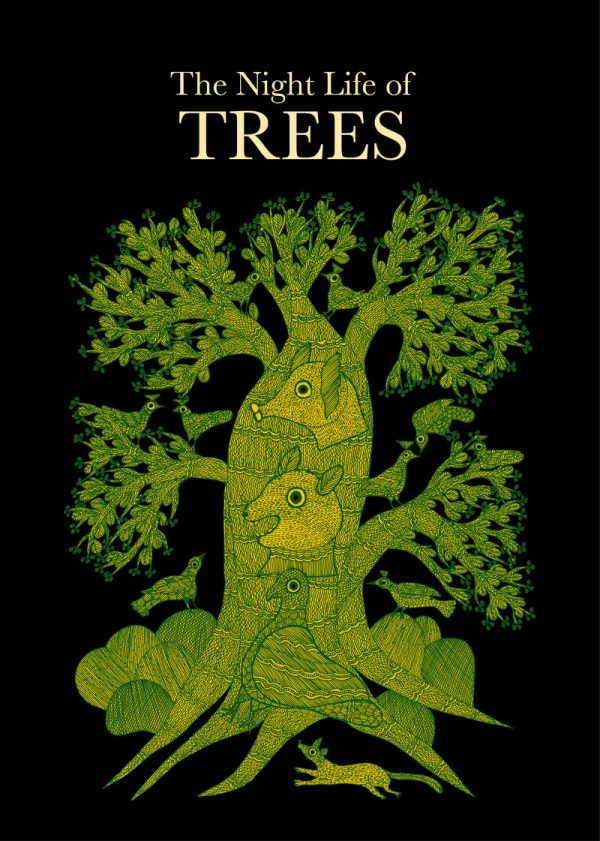 Which is not to say her art isn’t political. In her own quiet way, Durgabai is provoking conversations and becoming part of the change. She and her husband created the art for the 2011 graphic biography Bhimayana: Incidents in the Life of Bhimrao Ramji Ambedkar. In the foreword to the book, the famous art critic and author of Ways of Seeing, John Berger praised the innovation of its narrative: “No more rectangular framing or unilinear time. No more profiled individuals. Instead, a conference of corporeal experience across generations, full of pain and empathy, and nurtured by a complicity and endurance that can outlive the Market.”

There’s a telling line in a review of Bhimayana that holds the key to how artists like Durgabai view their work: When the Vyams leafed through the likes of Art Spiegelman, Joe Sacco and Marjane Satrapi, they were astonished that the characters were trapped within boxes. Defying the conventions of the genre they decided to divide their pages into dignas- the traditional design patterns used to adorn the floors and walls of Gond homes. 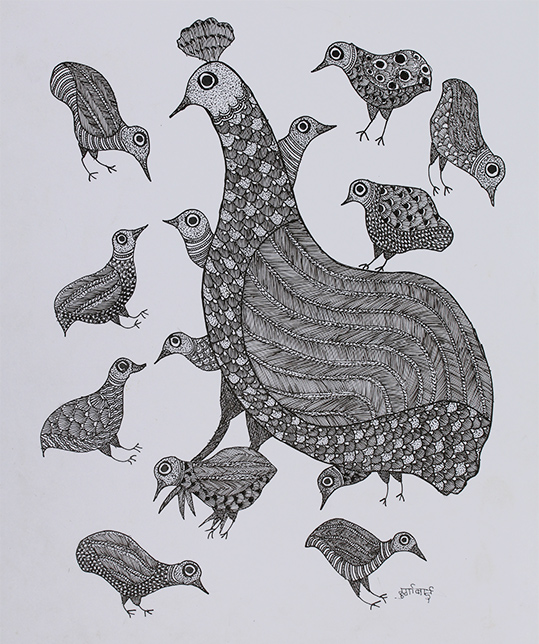 The digna is not considered to be special; it’s one of the many bits of unpaid labour Gondi women perform around their homes regularly. It’s an ephemeral thing, meant to be plastered over at the next spring-cleaning. But when a woman sits down to make the gond bhitti chitra in her home, in that moment, she is an artist, she is free. Durgabai brings that sense of freedom and openness to all her paintings. Whether it’s a tree stretching its limbs languidly into the night-sky or a tiny chick wandering in search of seed, all her subjects roam wild and free.

Durgabai Vyam was one of the five artists whose Wikipedia profiles we edited as part of Sarmaya’s event for Art+Feminism 2019. Visit Durgabai’s Wiki page by clicking here