The story of Raja Salhesh’s birth as painted and narrated by Shravan Paswan:

“The story begins from the bottom-right corner, where we see Mandodari. Mandodari was a widow, pregnant and mother to a girl, Bantukti. When she was close to her due date, she left her daughter at home to go into the woods and give birth. In our tradition, the mothers do not give birth in front of their children. Either we go to the hospital or we go to the jungle.

At the same time in the jungle, Brahma, Vishnu and Mahesh were doing Bharman (a celestial conference to decide the fate of the world). When they saw Mandodari suffering labour pains, they took the form of crying new-born infants. In the end, she had three sons, only one of whom was born from her womb.

In our culture, once a baby is born we give them warmth using fire, this is called aag sekhna. They are warm inside the womb so we do this so they don’t get sick when they leave it. Mandodari places her babies on a big leaf and goes to the village to fetch fire.

While she is away, the children grow up unusually quickly—after all, they are of the dev-vansh, ie they are godly beings. The three young men begin to wonder who they are, what clan they belong to and what their names might be. Finding no one to answer their questions, they climb onto elephants and horses and proceed towards the village. On their way, they met their mother who was returning with the fire.

Naturally, Mandodari doesn’t recognise these grown men as her babies and she’s terrified at the confrontation. She throws the fire in a lake and jumps in, pretending to catch fish using her saree. The three men say, ‘Oh mother come out of the lake! Who are you? Who are we? Which clan do we belong to? Give us our names!’

A relieved Mandodari replies: “We are from the lower castes of Dusadh and Musar. Our main occupation is fishing.” She named her sons Raja Salhesh, Moti Ram and the youngest, born from her womb, would be Baua Bhuddheshwar.

Once they learned their origins, the three men threw away the high-caste bows and arrows they were carrying and took up the weapons of their own caste, ie swords. Even today in our weddings, we use a sword to fill in the sindoor of the bride.” 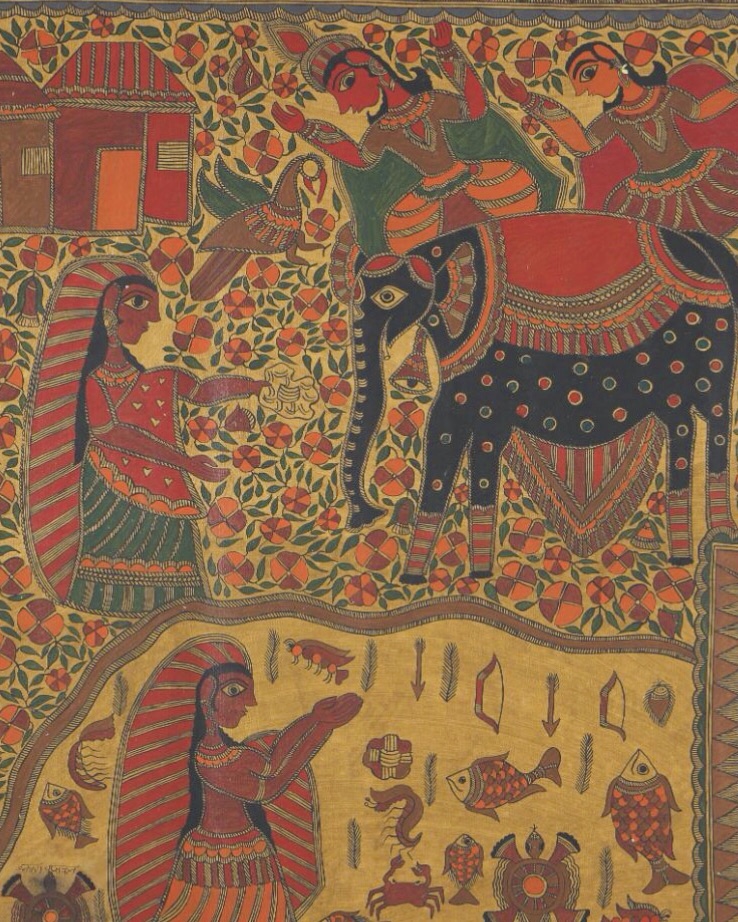 “Yeh hamare jeevan ki Mahabharat hai,” says Shravan Paswan, describing the existence of Dalits in caste-ridden India as akin to the wars in Hindu epics elaborately captured in Madhubani paintings. Now in his mid-40s, he has known the art form to be part of his life for as long as he can remember; renowned Godna artist Urmila Devi is not just his mother, but also his teacher and co-artist. Together, mother and son are highly respected for their work and have several awards to their names, including the Kalidas Samman and Rajyothsava.

We speak on the phone, with Urmila Devi’s grandson helping translate as she (now 65 years old) tells me how she was married off as a child — she struggles to recollect if she was 10 or 15 years old at the time. Legendary artists Channo Devi and Roudi Paswan were her teachers, and trained her for a year in Godna painting, a distinctive and meticulous style of Madhubani that originates in traditional tattoo patterns. Stories are of course integral to the art form, and are told on walls, sarees, canvases, and more recently, paper. Shravan is currently working on multiple saree orders, of which one will tell the story of Ramayana. It takes a week, he says, to finish those that need elaborate detailing.

It is an art of patience, I realise. But more importantly, it is an art of hope. For these incredibly talented artists, it is their way out of poverty, and a way to command respect and earn dignity in a society that has deemed them unworthy at birth.

Shravan: "We lived in very poor economic conditions. My father was a cycle rickshaw puller. I learnt to paint while I was studying… in fact, education got missed out in my pursuit of painting. Because painting is my whole life. My mother and I would paint to earn the 30-40 rupees — in those times — that the painting would get sold for. It was our bread and butter and my only means to get educated."

Could you tell us a little about how you learnt painting?

Shravan: "I learnt Mithila painting from Smt Sita Devi. She is very well-respected for her contribution to the art form. And I learnt Godna painting from my mother, who is my guru and janamdata. In 1991, I attended a workshop in Chandigarh where my mother and I were invited to come, learn and create art. After that, there has been no looking back." 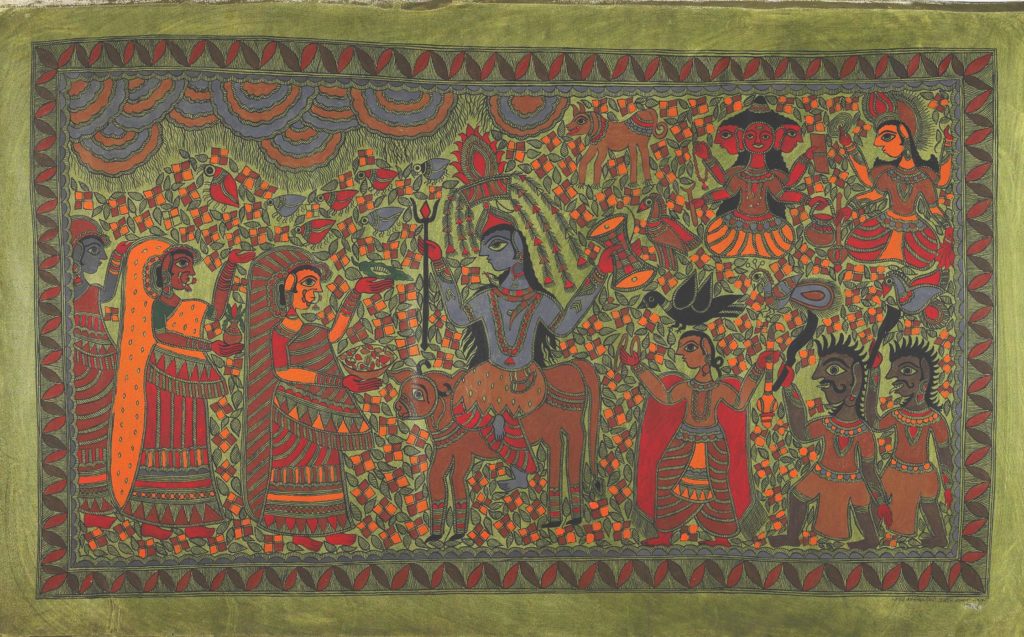 What are your first memories of the art?
Shravan: "I think I was in Class 7 when I first tried my hand at Godna painting. My mother was a nurse at a private hospital. She would work during the day and sketch at night, and I would help with finishing the painting after school. Sometimes I would mess it up, but then my mother would show me how to do it better. A lot of mom’s paintings were ruined by me, but she would design them in such a way that they would be the first ones to sell. That’s how well she could turn them around.

Once my mother was working on a 10-foot-tall Godna painting on plain paper. When I was working on the lining of the painting, I dropped colour all over it and made quite a mess. But even that colour was then redesigned by mom in such a way that a Japanese customer was completely awed by it. When he asked her how she did it so well, she nonchalantly responded, “My son dropped colour on it, so I turned it into a scorpion.” That painting eventually won her the Rajya Puraskar.

Even though Madhubani paintings have come from the women of this district in Bihar, the art form has legitimised painters from the Dalit community only in the last century. Kayasthas and Brahmins who mastered the art prevented Dalit women from learning or practising it. Their caste location meant they couldn’t tell the same stories of deities from the Ramayana or Mahabharata like upper-caste painters did. They had to find inspiration in nature and their own surroundings. With more painters now from the Dusadh caste, the composition of renowned artists has changed — but attitudes have not. Discrimination against Dalit artists remains rampant and their success is not celebrated."

After all the awards you’ve won and recognition you’ve received, does caste still matter?

Shravan: "Yes. That does not change. We live at the very end of the village. Even now when buyers come to the village to visit us to place an order or see the paintings, people from upper-caste homes misdirect them to wrong places or tell them we are elsewhere. Some buyers have had to say they would come to our home to see for themselves if we were there or not, only to find us at home."
Urmila: "Some even go to the extent of saying, “They are dead.”"

How does your Dalit identity shape your art?

Shravan: "Caste shapes my perspective a lot. I was once invited to the Lalit Kala Academy in Thrissur, Kerala, where 120 Indian and international artists from India had gathered for a workshop. The subject of the workshop was the Mahabharata, and while everyone painted scenes from the epic, I wondered why not portray the Mahabharata from my own life. Like the way untouchability is practised. In that painting, I depicted the way Brahmins refuse to let Dalits enter their homes or drink water. I was very young when I was lathi-charged because I was taking a bath in the village pond. My mother was beaten for entering the temple. All of these instances made up the painting that I presented in Kerala, and it won the Lalit Kala Award."

Despite the continuing discrimination and the endless obstacles that caste exemplifies in their love for Madhubani painting, Urmila Devi and Shravan Paswan refuse to let go of the brush and colour pot. Through their stories of the Dusadh deity Raja Salhesh, they keep their narratives colourfully alive, one painting at a time.

But what moves me most, as I interview both mother and son, is their love for each other and their relationship, woven together by this art. Shravan tears up as he tells me that he thinks of his mother (and guru) every time he sits to paint. She is the reason he found his passion. Urmila Devi proudly enumerates the many awards Shravan has won. For them, art is a way to hold up a mirror to society, but also deeply personal and intimate in shaping their home.