The year is 1564. It is business as usual in the Mughal capital of Fatehpur Sikri. Only this year, the newly crowned ruler Mohammad Jalaluddin Akbar has commissioned what would come to be known as one of the most ambitious artistic projects in the history of the Empire: the illustration of the ‘Qissa-e-Hamza’ or the Hamzanama.

Akbar, who was crowned king at the age of thirteen, grew up listening to the adventures of Amir Hamza, uncle of the Prophet Muhammad. The historical Hamza Ibn Abdul-Muttalib (c. 569-625) was initially opposed to Islam, but on conversion became one of its most ardent followers. A favourite topic among the storytellers of Persia, Amir Hamza became a hero in popular legends, an intrepid warrior who travelled the world spreading the message of Islam. Of course, when Akbar heard about him many centuries later, the wandering minstrels and bards had layered the historic core with multiple fictional accounts, as befits any epic. By the time Akbar decided to get the epic illustrated, Amir Hamza was fighting demons and dragons, hanging out with sorcerers and fairies and flying about as befitted his superhero persona. 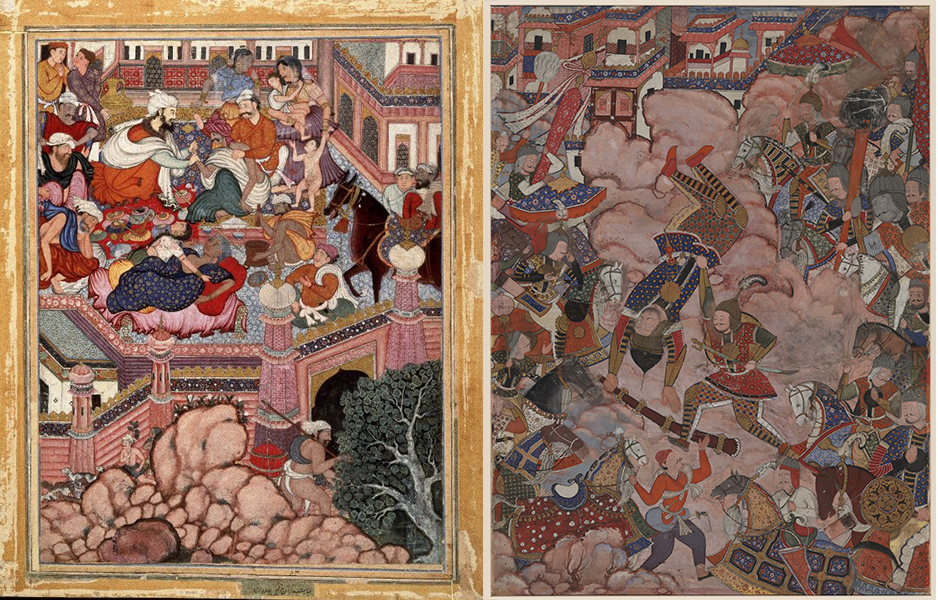 Left: ‘Amr Disguised as Mazmahil the Surgeon Practices Quackery on the Sorcerers of Antali’, courtesy Brooklyn Museum. Right: ‘The Battle of Mazardan’, courtesy the Library of Congress

Akbar commissioned an astounding 1400 folios from the Hamzanama, of which 200 survive today in various museums and collections across the world. It was made in volumes of twelve, fourteen and seventeen, and took over fifteen years to complete. Naturally, such a large project demanded an extensive engagement of various talents. Miniature artists, book binders, calligraphers and gilders were employed in hundreds from neighbouring regions and courts. These local artists, trained in the styles of the regional courts, were mentored by two master artists from Iran brought to India by Akbar’s father, Mir Sayyid Ali and Abd-al-Samad. This collaboration resulted in an artistic fusion with elements from the Iranian traditions merging with those of Rajput, Pahari and even Deccani schools.

The visual language of the Hamzanama folios is that of synergy and syncretism, yet it’s somehow very Indian in spirit. Persian palaces with dazzling tile-work sit amid sumptuous tropical gardens while people wearing vibrant colours go about their day: monks climb up a steep mountain, princesses are kidnapped and demons are beheaded, while somewhere in the city, someone kneads dough for supper.

The Hamzanama is also significant because it exemplifies the importance of a relationship between a patron and his painters. Abul Fazl, Akbar’s official hagiographer, documents the extraordinary degree to which the emperor involved himself in the process of art production. Akbar would regularly track the progress of his project, inspect each folio individually and increase salaries of those who were showing progress. He also had a very keen eye in spotting talent, the most famous example being the young prodigy Dasvanth, the son of a palanquin-bearer. 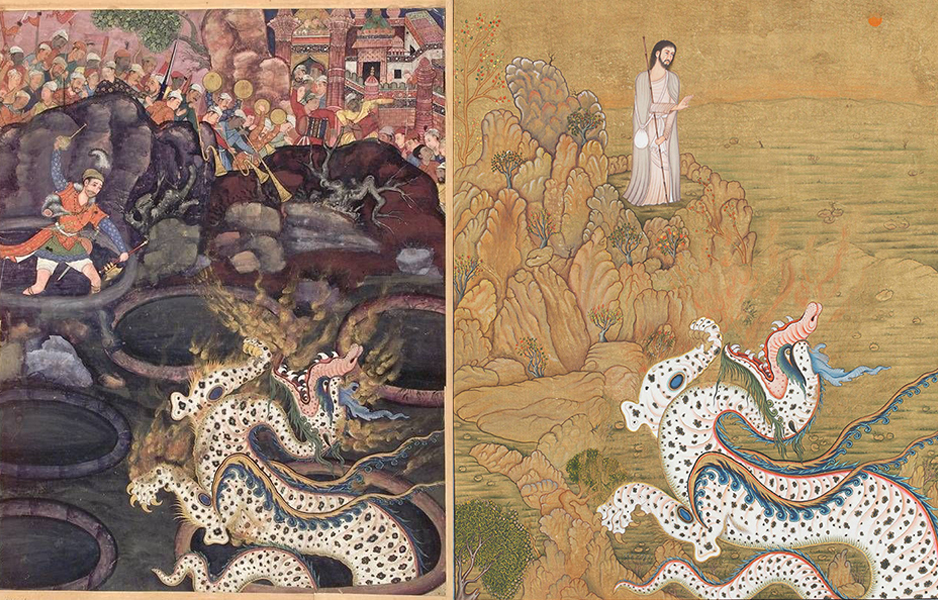 Akbar’s patronage and his relationship with the artists is closely reflected in the Issanama,  a series commissioned by Sarmaya founder Paul Abraham to Manish Soni, a miniature artist from Bhilwara. The Issanama may be the story of Jesus, but it draws from a syncretic narrative of history and attempts to visualise Jesus and his life through the lens of the medieval orient. Soni, like the painters of Akbar, is inspired by a multitude of styles and schools, and he brings them together in these folios, lending them with a very humane and tangible quality. This is not about Jesus the messiah, but Jesus the man. 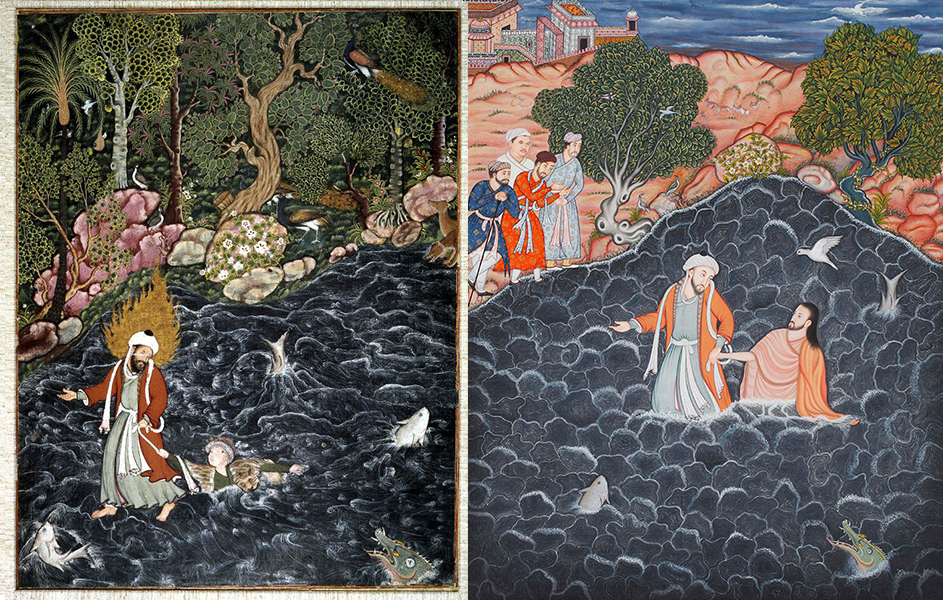 The artistic oeuvre that inspired the Issanama paintings is primarily the original Hamzanama as commissioned by Akbar. Occasionally, it also looks to the Punjab hills where Raja Balwant Singh and his court painter Nainsukh created equally human and tangible compositions depicting everyday and courtly life. A Pahari painting of villagers gathered around a fire on a cold winter night finds re-interpretation in the Issanama as the ‘Last Supper’. After all, isn’t this closer to the reality of how Jesus and his disciples in Jerusalem might have gathered for a simple meal, a night before his crucifixion, an event that casts a dark shadow over this communal scene? 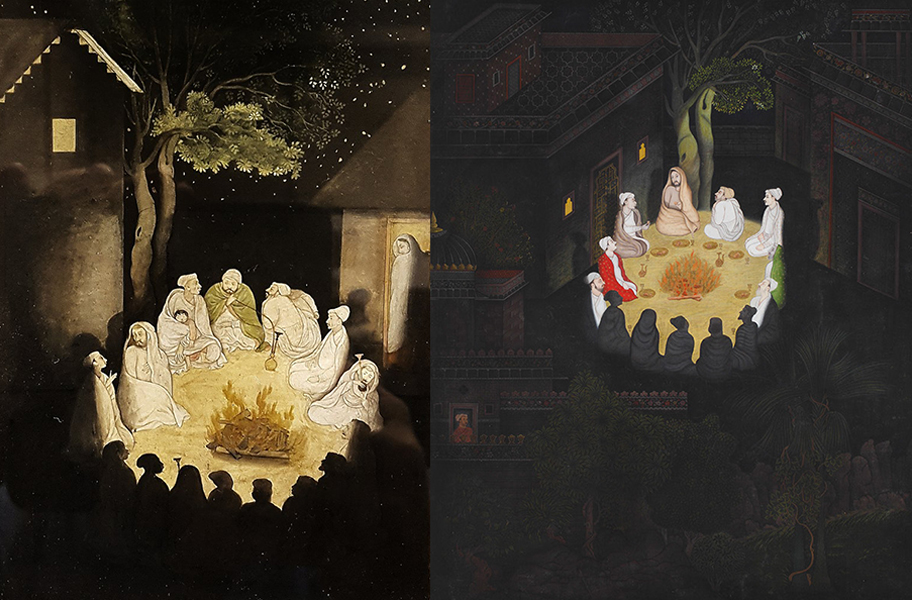 Left: Painting by Nainsukh (possibly ‘Balwant Singh and the Villagers on a Winter’s Night’) c.1760, courtesy Indian Museum. Right: The Last Supper by Manish Soni for the Issanama series

In the Issanama, the world of Jesus Christ and the world of Amir Hamza continuously collide—characters are re-identified, settings are re-contextualised, art begets art. 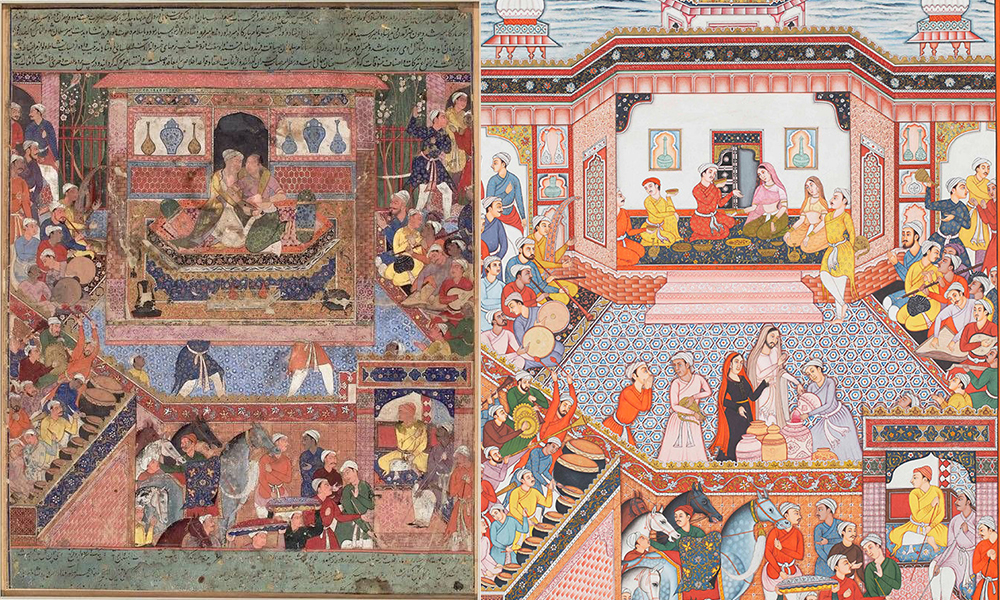