Mother goddesses are an ancient and global cultural phenomenon. As evidenced by the existence of the palaeolithic Venuses, sculptures of nude female figures in exaggerated birth-giving postures and, closer home, Lajjagauri of 1st-8th century Deccan. These were also naked and headless or lotus/stupa-headed female forms shown squatting with their genitals exposed. Lajjagauri sculptures are interpreted by historical researchers as being a tribute to the feminine power of creation. The figure is understood to be worshipped alone, as a virginal mother; no equivalent male figure has been found in the Indus Valley sites of Kullu and Zhob, where busts of the mother goddess have been unearthed. 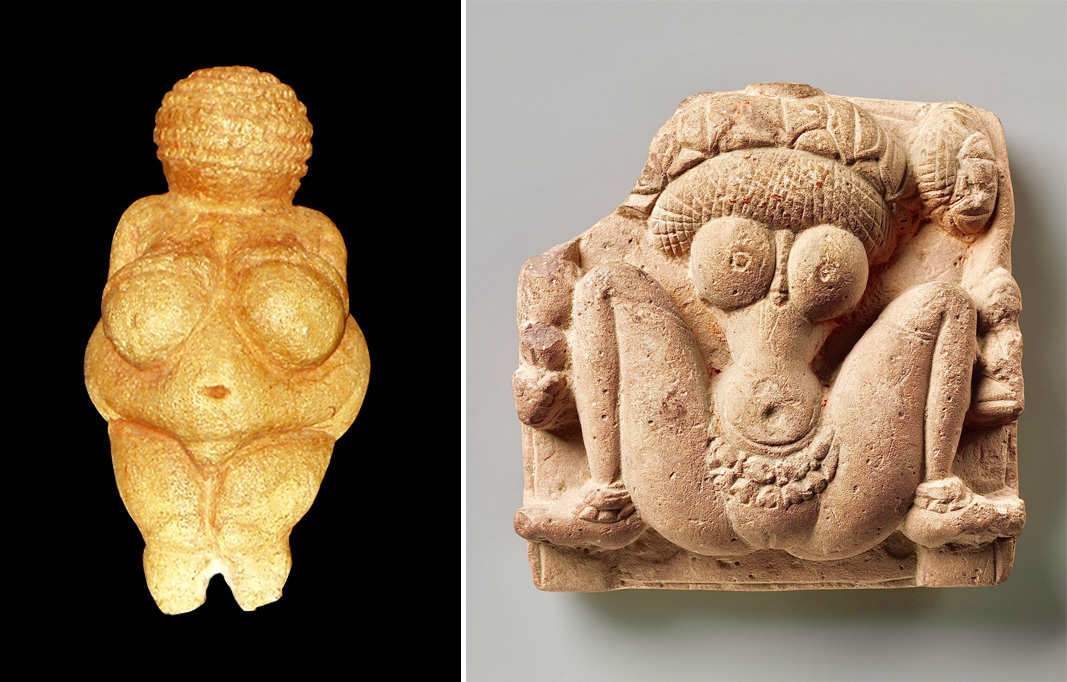 While she is revered for her powers of creation, the mother goddess isn’t worshipped as the ideal of ‘motherhood’—rather she represents abundance and regeneration. An example of the latter can more clearly be understood from the hundreds of nude sculptures bedecked in jewellery and discovered buried in ancient granaries, perhaps to bless the growth of crops and wealth. Or from the 3rd- 4th century Nagarjunakonda Lajjagauri, beneath whose naval we see a ‘purnaghata’ or overflowing pot. Researchers like Indira Aiyar have noted that the presence of Lajjagauris in the more arid regions of the Subcontinent suggests she might have been a rain goddess. 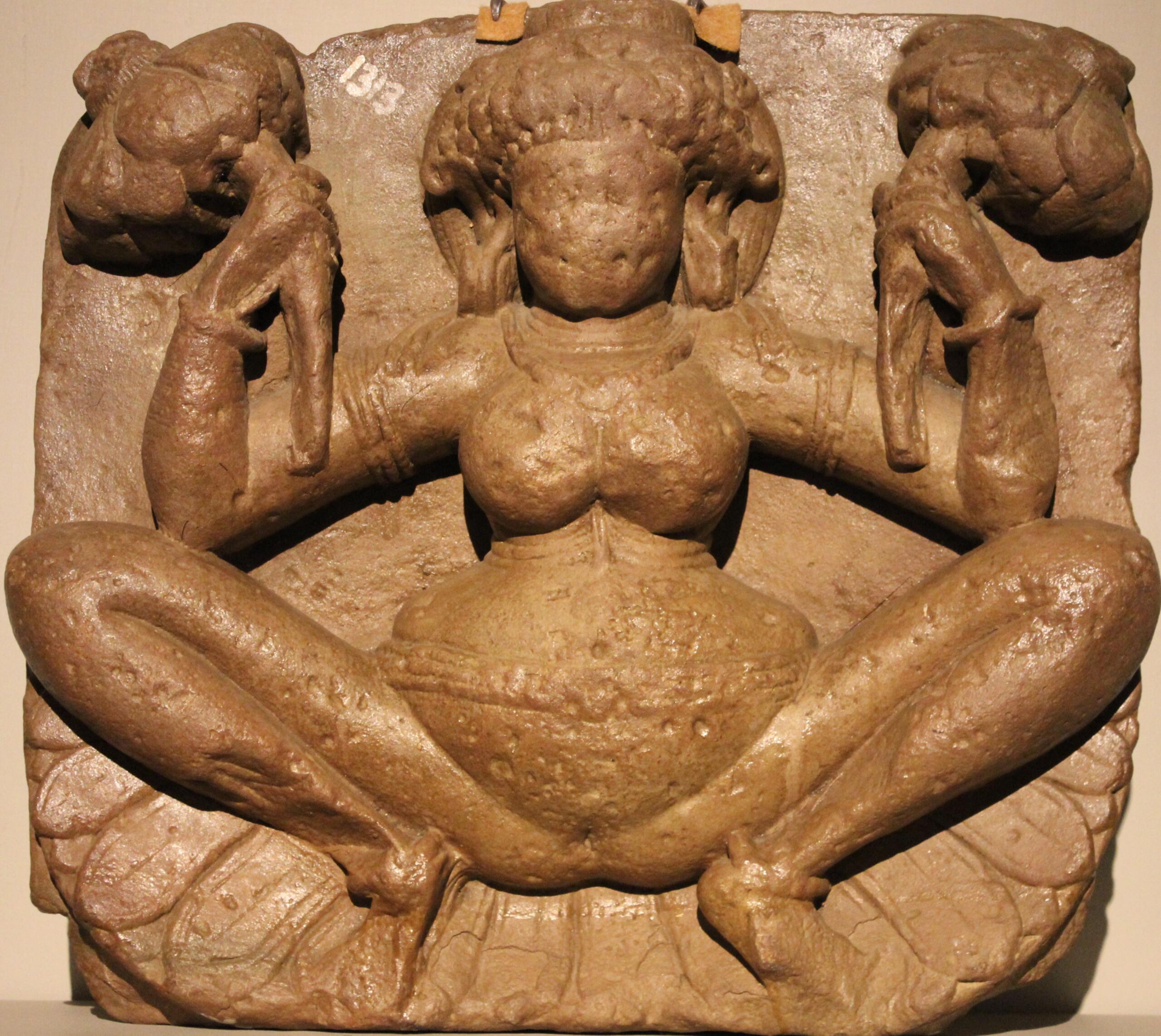 Lajjagauri as mother goddess, depicted with a brimming pot/ Wikicommons

Dhartari, Goddess of the Earth

In the Hindu vedic texts, Goddess Aditi—the unbound one—is believed to have made the universe. In the Rig Veda, she is introduced as the formless ‘Mighty Mother’. She is described as ‘protectress of all men, her children. She is all that there is.’ Aditi is the creator, the protector and the regenerator. She mediates between life and death. In the Hindu pantheon today, only a handful of deities can be regarded as descendants of the original mother goddess of the Vedas.

In tribal cultures, the worship of the formless goddess or the naked creator of earth is still observed today. Warlis are the oldest settlers of the region of present-day Maharashtra and Gujarat. They worship the mother goddess in the form of Dhartari. All beings emerge from her and in death, return to her embrace. Once upon a time, according to a popular Warli song, the tribe had stopped caring for the land. Insulted and enraged, Goddess Dhartari began to wreak havoc and rain death on her people. They realised their mistake and have since then sought to live in harmony with the land.

Durga, Goddess of Plenty & Protector of the People

Durga is simultaneously a descendant of the Vedic mother-goddess and a creation of the gods. She contains multitudes; she is the goddess of harvest and battles, she is a tribal goddess and a Hindu deity, she is the goddess without a consort and as Gauri, she is the wife of Lord Shiva. Her origin stories and forms are many and vary across cultures. The best known of the myths of Durga are celebrated during the festival of Dussehra in the month of October-November. During this time, she is worshipped in her nine forms, each depicting a phase of her life. Some of these forms, enumerated below, are worshipped as goddesses in their own right.

At Dussehra, Durga’s story begins with her declaring the desire to marry Shiva and become the goddess of mountains, Shailputri. Shiva refuses and she assumes the role of the virgin hermit or kumari, Brahmacharini. Shiva realises he is incomplete without her divine feminine force or Shakti and they marry, whereupon she becomes a bell-shaped moon, Chandraghanta. Once married she becomes gently aroused, radiant like the sun, Kushmanda. Their union makes her pregnant with Skanda and she becomes Skandamata. When she challenges the mighty demon-king Mahishasura to battle, she is Katyayaini. Intent on restoring peace on earth, she then goes to war against twin demons, Chanda and Munda, as Kalaratri. Victorious in her crusade and restored to calm, she returns to her domestic life as Mahagauri. In her final form, she is the accomplished one, Siddhidhatri.

This married, domestic avatar of Durga is a relatively recent phenomenon. In medieval and early modern times, her identity was not related to Lord Shiva. The earliest written reference to the goddess is found in the Mahabharata. In it, she appears only in a prayer that describes her as the daughter of Yashoda, wife of Nanada of the cowherd tribe. It goes on to say that the dark-skinned goddess lives in the Vindhya hills (Shilaputri) as a kumari (Brhmacharini). Scholars have thus concluded that the worship of Durga, like that of Lord Krishna, is of tribal origin. In parts of Madhya Pradesh, she is still revered as Vindhyavasini, Goddess of the Vindhyas. While in Odisha’s Sambhalpur, the people of Kulta, Dumal and Sud tribes celebrate a 10-day festival honouring Kumari. People make their own goddess sculptures from clay, smear her with vermillion and carry out a visarjana or final immersion in flowing water. 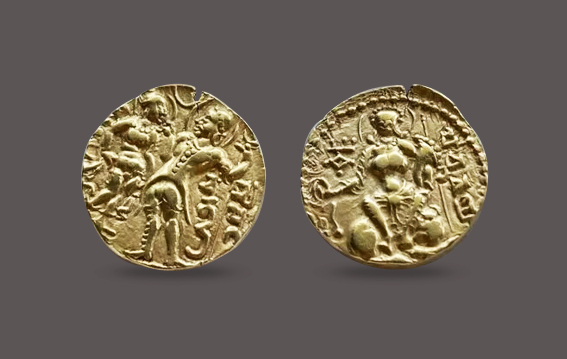 The martial avatar of Durga became popular during the period when Kushans reigned over north-western India (1st-3rd century). The mythologist Devdutt Pattanaik describes them as masters in inclusive secularism, who established the local clan goddess as the royal protector of their empire. The Guptas (4th-6th century) followed suit, issuing coins inscribed with the form of Durga as patron of the dynasty. This is how the goddess’s iconography became closely linked with royalty. Radiating power and wealth, she was depicted wearing jewels, carrying weapons and sitting astride a lion. 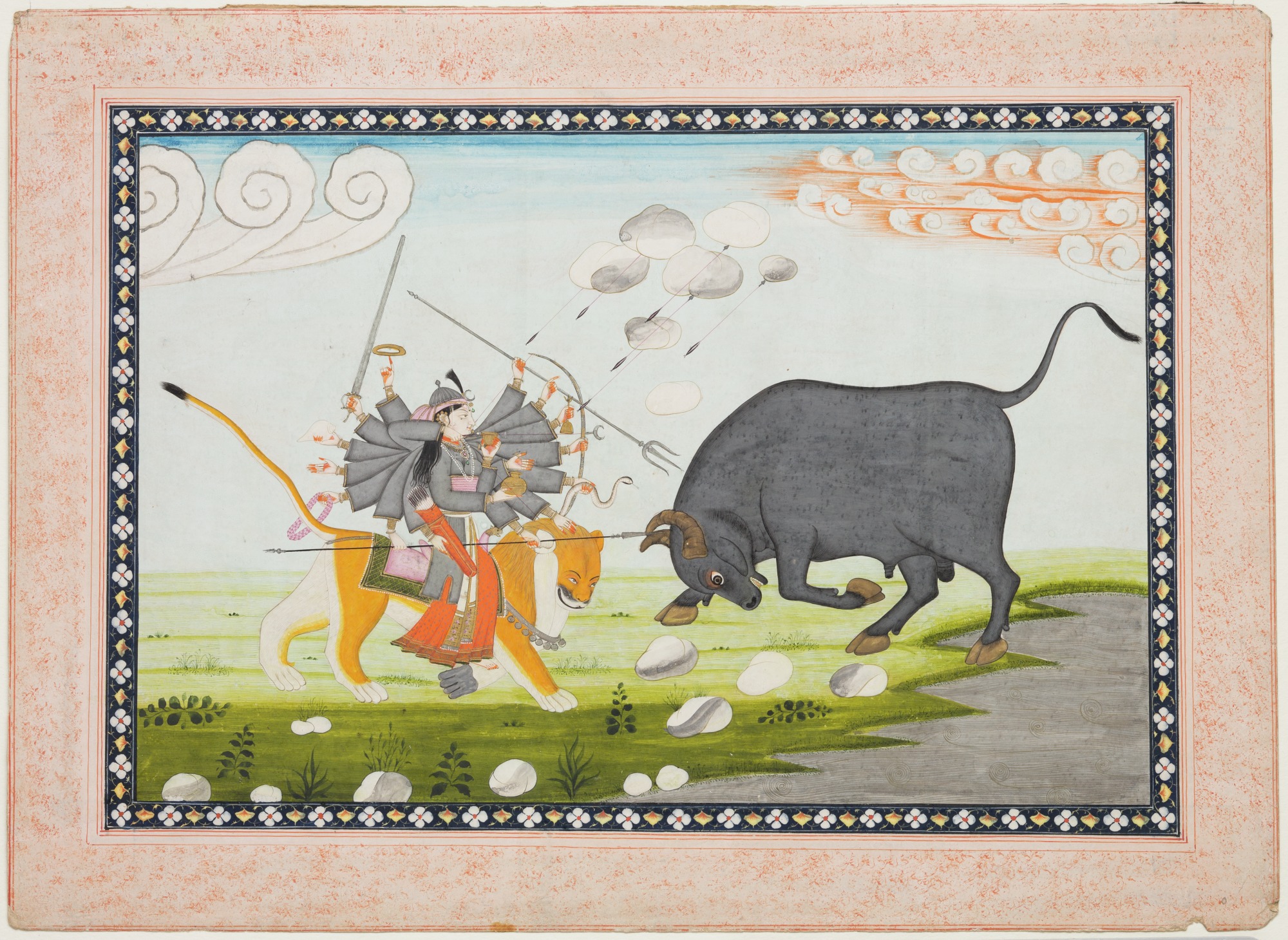 Durga’s martial form solidified in myth around 600 CE as Mahishasura Mardini, ie she who destroyed Mahishasura. The story goes that a powerful demon named Mahisha acquired a boon from Lord Brahma, the creator of the universe, by doing severe penance. According to the boon, Mahisha could not be killed at the hands of any man or god. Emboldened by this, the demon unleashes a devastating reign of terror on earth. Troubled by this existential threat, the gods decide to combine their powers to stop Mahisha. To get around the condition of the boon, they create a warrior goddess. She is given10 arms to carry gifts from each god: chakra, trishul, thunderbolt, sword, fire, mace, snake, conch, discus and lotus. A roaring lion is her vahana or mount. A one-woman army, she marchs into battle with Mahishasura. It lasts 10 long days and on the tenth, he is finally slain. Durga is declared the supreme goddess and protector of the universe, containing in her person the combined power of all the gods.

Local deities continue to be assimilated into the Hindu pantheon even today and Durga is often the catalyst. As recently as the 1980s, archaeological accounts make no mention of her in connection with Mumbadevi, the protector goddess of Mumbai worshipped by the Koli people. Today, however, the figure of Goddess Durga sits on a lion next to the figure of Mumbadevi in her temple, suggesting that the latter is but an avatar of the former.

Like Durga, Lakshmi is a descendant of the Vedic mother-goddess. She’s worshipped in Hindu, Buddhist and Jain traditions. The earlier avatar of the Goddess was Shri, a deity who presided over harvests. This agrarian association can be observed even today during the festival of Diwali. Celebrated at the beginning of winter, Diwali is the occasion to propitiate the Goddess for a good harvest/good fortune.

In the ancient text Shri Sukta (1000-500 BCE), Srilakshmi is described as lotus-face (padmanna) with lotus thighs (padma uru) and lotus hands (padmastha)—aspects she retains even today. In Kushana sculptures, Srilakshmi can be seen amidst lotuses, appearing from a purnaghata (overflowing pot) and pressing one of her breasts, suggesting plenty and prosperity, and reminiscent of Lajjagauri. Beginning around 400 CE, she was considered the primary consort of Narayana or Lord Vishnu. Lakshmi is described as temperamental, often leaving her partner and returning at her whim—in this way, she embodies the fickle tides of fortune. The Goddess of Wealth we know today is usually seen draped in a red saree, her four arms wielding chakras and lotuses, and seated in padmasana on a giant lotus. 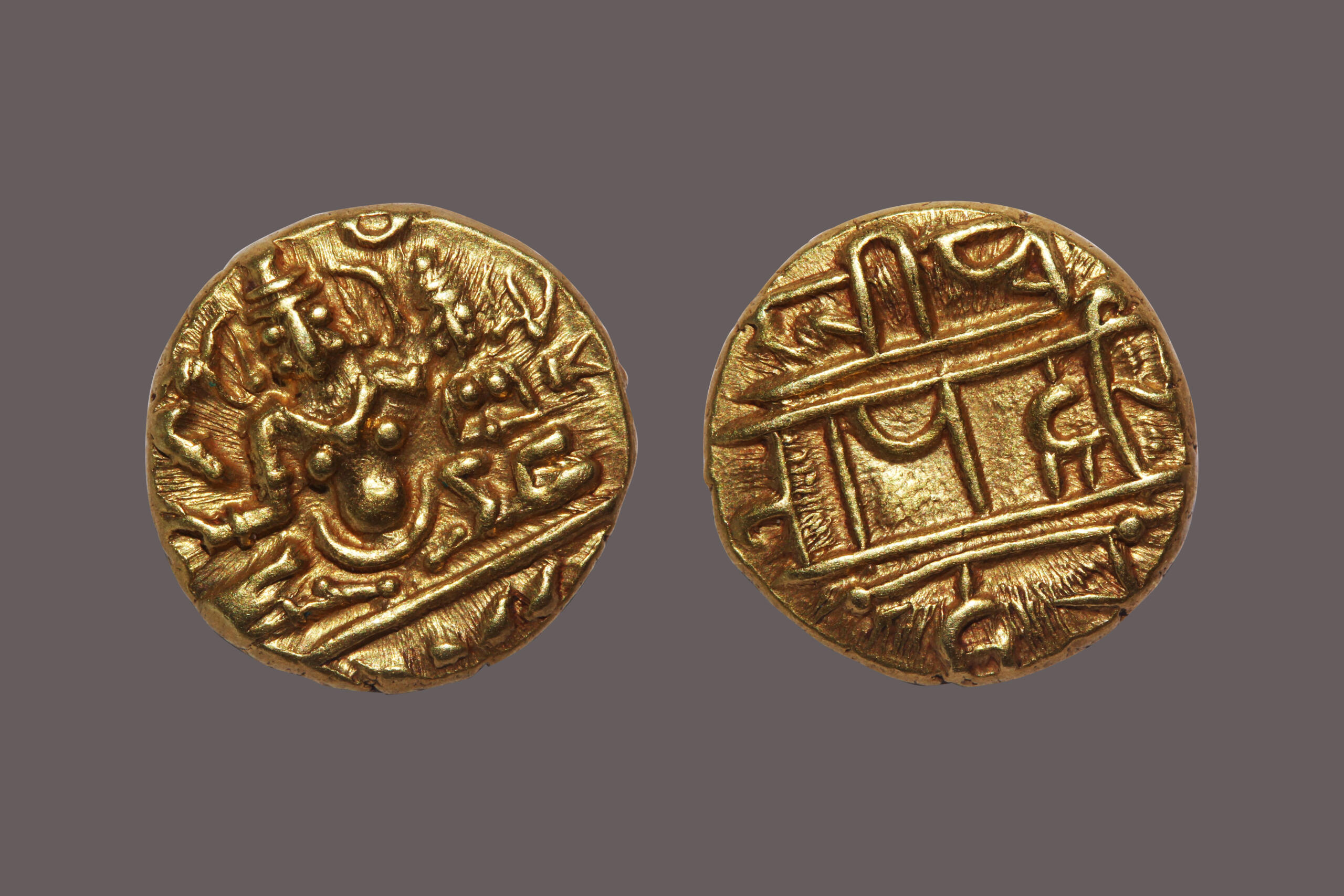 Srilakshmi was always associated with sustenance and growth, but when powerful kings appropriated her symbol, she came to be more overtly linked to ideas of money and wealth. Her popularity in this area can be traced through royal coinage; Lakshmi is the goddess depicted most prolifically in Indian numismatics. Coins of Kushans, Guptas, Malwa rulers, Hoysala kings, the Vijaynagara empire, Muhammad Ghori and many others carry her likeness. During the Gupta period, almost every coin had a goddess with an inscription on the reverse, and most of these coins showcased Srilakshmi or Gajalakshmi. Gajalakshmi or Rajyalakshmi was her royal avatar, seen flanked by majestic elephants. In these coins too Lakshmi is seen standing on top of a pot. 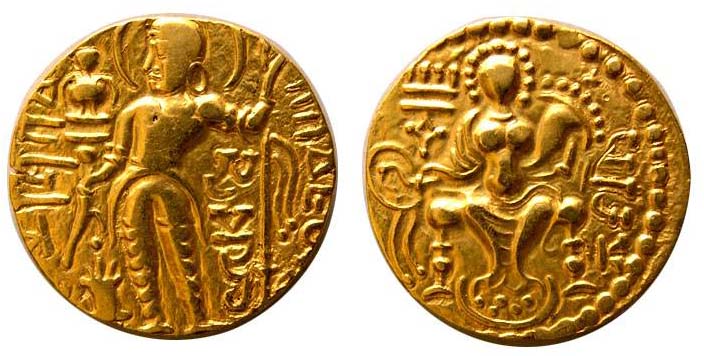 An interesting avatar of the Goddess is Mahalakshmi, whose worship can be traced to the Shakti movement. Although she is married, she is worshipped independently. Popular in Maharashtra, Mahalakshmi is a warrior goddess.

Mariamman or Amman is a protector goddess popular in many rural parts of southern India. She is the bringer of rain and repeller of disease. The word ‘mari’ in Tamil translates to rain as well as smallpox, which spread as a deadly epidemic across the region in the ’60s and ’70s. Mariamman is believed to be the one who both inflicts and saves communities from the disease. Each village has different iconography, names and kodais or annual festivals dedicated to Mariamman. Some conduct animal sacrifices, others observe rituals of penance and yet others propitiate her with offerings of grain, fruit and valuables. 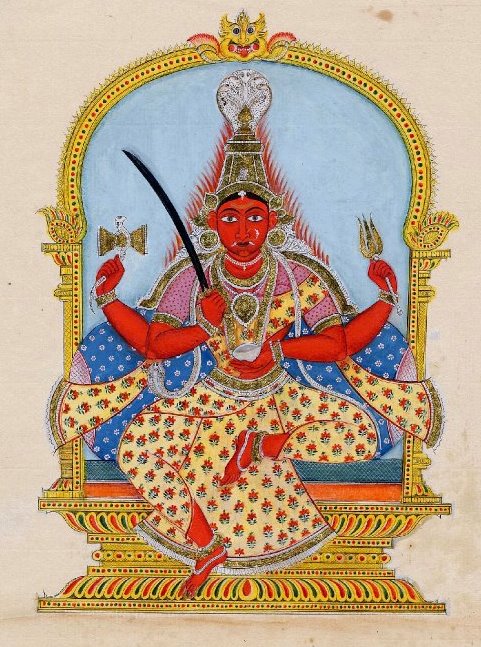 It is believed that Mariamman is the creator of the village and an embodiment of the land—seeds are thus sown in the body of the goddess, who symbolises fertility. Like Lajjagauri, she is regarded as a virgin because it is believed that only chaste women can bring down rain from the heavens. And like Durga, she takes on various forms in Dravidian culture.

During the rule of the Pandyas, Mariamman was worshipped as Kannaki or Kannagi. Legend has it that Kannagi’s husband was executed after being wrongly accused of theft. Angry and distraught, she burnt down the city of Madurai. Sacrificial ceremonies were held to appease her. Once she was satisfied, she called for rain to dowse the fire and reinstate peace.

During the medieval era, she was assimilated into Aryan tradition and became known as Renuka, the mother of Sage Parashurama. Today, Mariamman is worshipped by tribal and Dalit Indians as well as upper-caste Hindus, but her non-Brahmin priests have been replaced by Brahmins. Her assimilation as a consort, however, remains unsuccessful. Independent of any god, Mariamman continues to protect her flock as the all-powerful mother goddess.