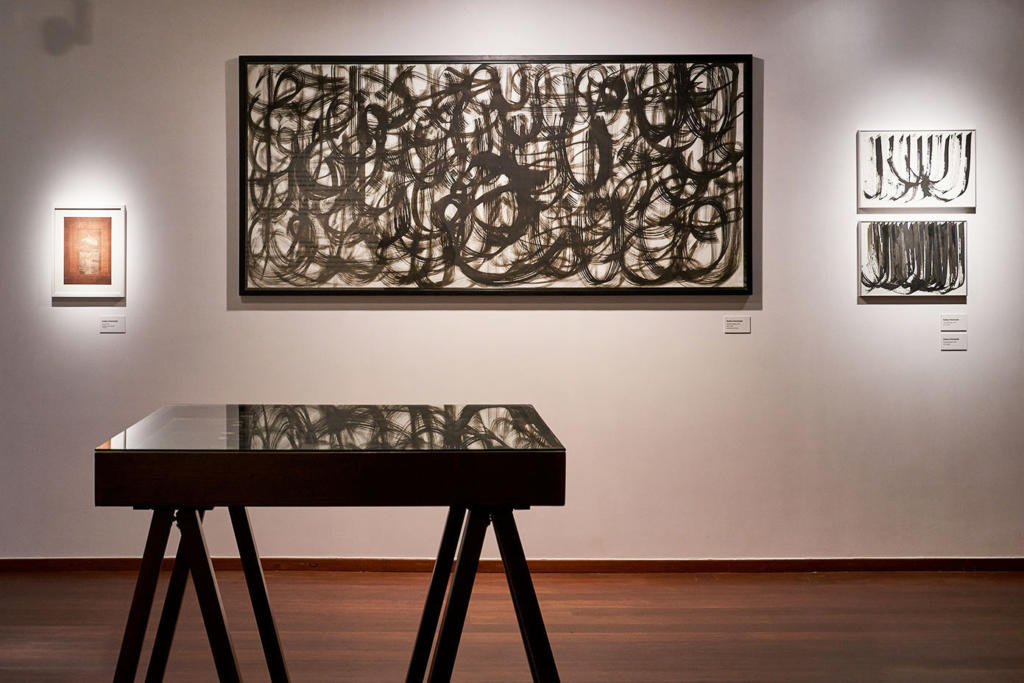 Saubiya Chasmawala began questioning her relationship with her faith when she was still studying Visual Arts at the Maharaja Sayajirao University between 2013 and 2015. Sifting through her childhood experiences, she began exploring her identity through history-making devices like photography and calligraphy. Using snaps from her family archives and the Arabic script she studied growing up, Chasmawala alters the devices to take ownership of their ‘meanings’, to re-author the narrative and to question authority. 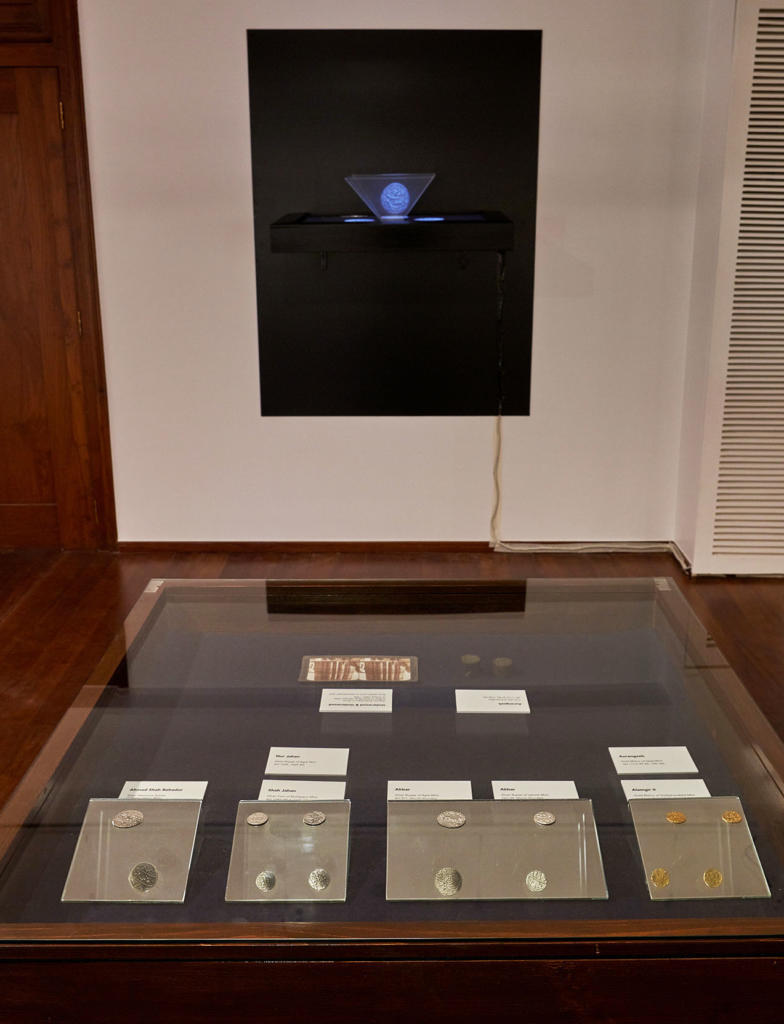 Her works from show Batin are a new expression of Arabic calligraphy. Chasmawala recalls in a video for TARQ how as a child she would recite verses from scripture without really understanding them. In this series, she probes the valley between learning and understanding. Preparing for our exhibition at TARQ, Shifting Selves – Between meaning, mythology & mirage, we called to mind diverse objects from our collection that reinforce the points that Chasmawala makes through her body of work. As distinct as something like a Mughal coin is from contemporary art, in this context, it serves to show us that faith can be the canvas on which power is asserted; language is often a vehicle of identity; and detached from historical context, even the most enlightened ideas can become meaningless marks on a wall.

Sacred spaces and the men who shaped them 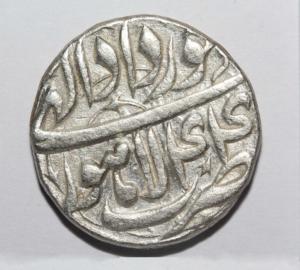 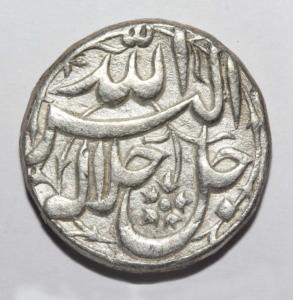 These two silver rupees of Emperor Akbar (1556- 1605 CE) demonstrate his attempts to achieve a prophet-like prominence through his experiments with religion and numismatics. In the coin showcased here we see the Kalima (the sacred Islamic creed) inscribed on the obverse, a practice he inherited from his predecessors. But after consolidating his rule in the subcontinent, Akbar in the 30th year of his reign replaces the Kalima for the religious creed ‘Allahu Akbar Jalla Jalala’.  The phrase literally means ‘God is great, eminent in his Glory’ but it can also be interpreted as ‘Akbar is god, let his brightness shine forth’. Stealthily playing with words, Akbar placed himself in the centre of this ‘sacred’ space. Evident here too is Akbar’s experimentation with faith. On this coin, the Islamic or Hijri calendar is replaced with the Ilahi calendar, named for the faith he founded, called Din-i-Ilahi. The Illahi era begins the year he took the throne, ie 1556 CE. 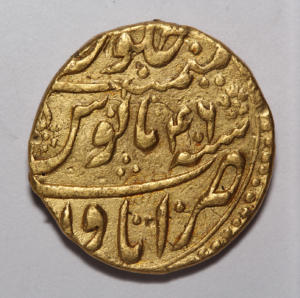 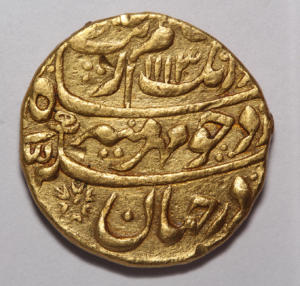 Further interventions in the realm of the sacred happened during the reign of Aurangzeb. When he ascended the throne in 1658 CE, he removed the Kalima from coins, which had been reinstated by Akbar’s descendants. On his coins, Aurangzeb swapped the Kalima, which he believed would be defiled by exposure to non-believers, with a couplet known as Badr Munir or the Mihr Munir. On the obverse of this gold mohur by Aurangzeb, we see the couplet stating: ‘Stamped coin, in the world, like the bright full moon, Emperor Aurangzeb Alamgir.’ 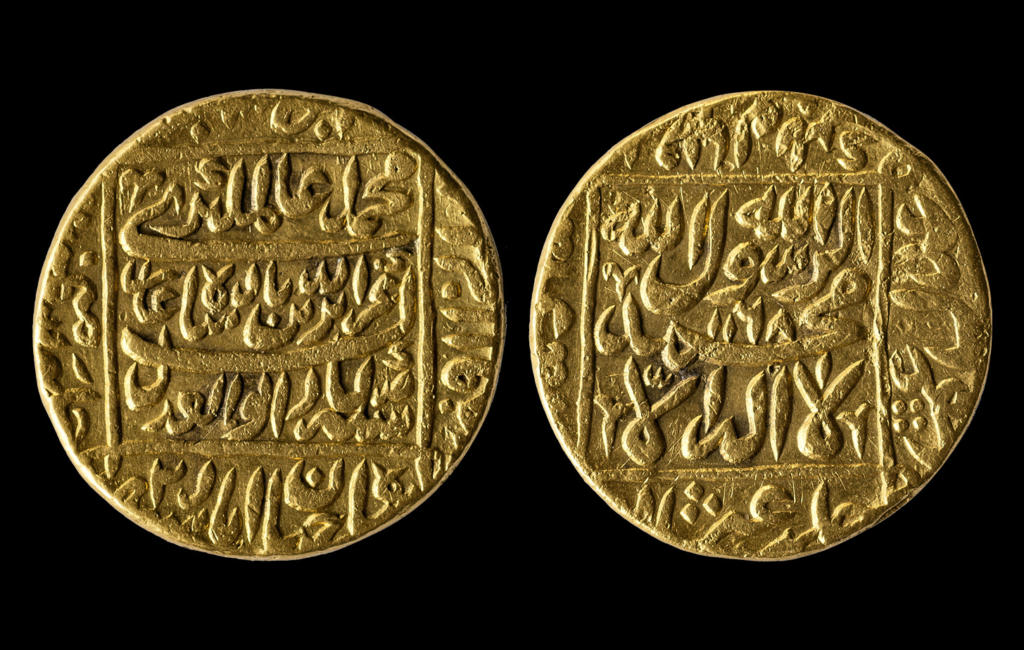 After Aurangzeb, the Mughal empire saw many pretenders to the throne, kings who were mere puppets instated by members of the court. Alamgir II was one such king; he ascended the throne in 1754 for a brief four year but managed to make his mark in the sacred space by reintroducing the Kalima on coins to showcase his devotion to his faith. The words, read on his gold coin from bottom up and right to left, are “Laaa Ilaaha Illa-llaahu Muhammadur-Rasoolu-llaah”, which means “There is only one God, Allah, and Mohammed is his messenger”.

Erasure in a man’s world

In her early 2017 works, Saubiya Chasmwala dives into her family archives and emerges with photographs that capture her visits to the chief pilgrimage sites of the Bohra community in and outside India. In the untitled photographic print from the Sarmaya collection, the artist herself is seen standing in the centre alone in the centre. But she is unrecognisable as her face in the photo has been scraped off the print made on handmade paper. Revisiting memories that speak of her loss of agency—more on that in her profile—Chasmawala reclaims her voice by willfully erasing herself from the landscape. 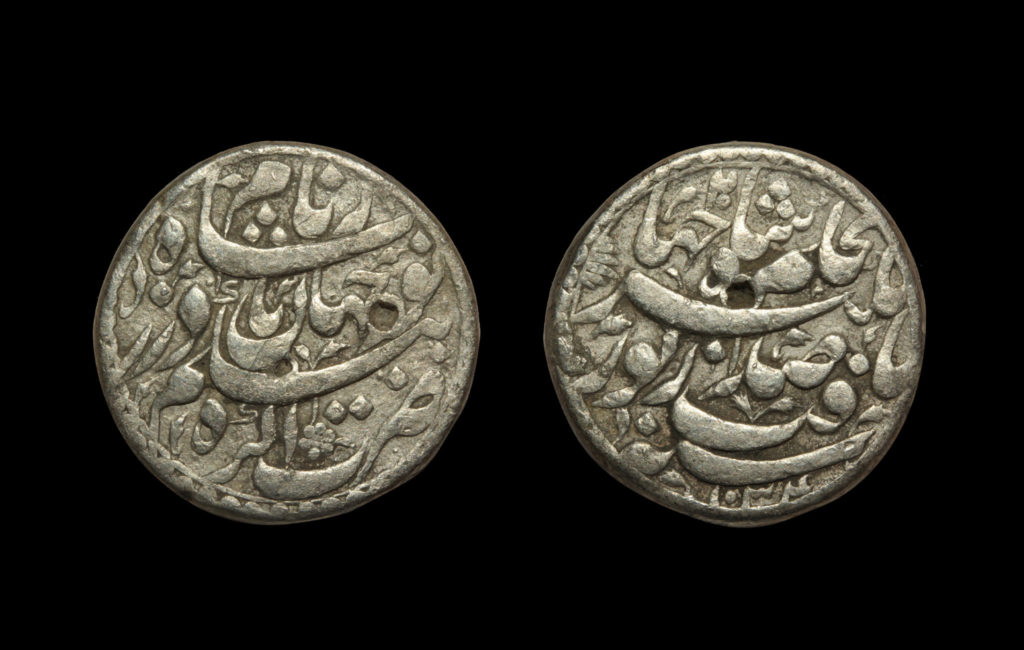 The history of Empress Nur Jahan’s coin too witnesses the struggle of women to take up space in a male-dominated society. The inscription on the coin’s obverse reads: “(coin struck) by the order of Shah Jahangir’. Her own name only makes an appearance on the reverse of the coin: “gold by the name of empress Nur Jahan”. The Emperor comes first even though Nur Jahan was a powerful co-sovereign who rejected the norm of silence and invisibility, and ably handled the reins of the empire when her husband was indisposed. It is telling of the monolithic structures we are trapped into when even a queen must first pay obeisance to the king before marking her place in history. 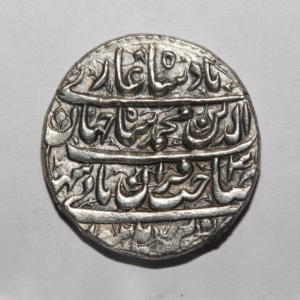 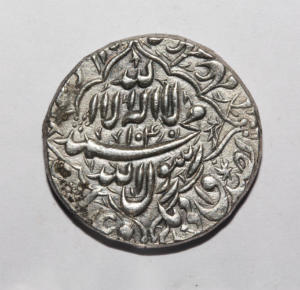 Already precarious, Nur Jahan’s legacy was further endangered in the reign of Emperor Shah Jahan, who succeeded Jahangir. Upon taking the throne, he recalled her coins from circulation, ordering them to be melted—this is what makes coins by Nur Jahan so rare today. During Shah Jahan’s reign, official historians of the court deliberately wrote Nur Jahan’s merits and accomplishments out of official Mughal history. Their records omit entirely the extraordinary achievements of the co-sovereign, just some of which were offering political advice, making laws, shooting a tiger to protect her subjects, commanding a battle on a roaring river, and rescuing a kidnapped emperor Jahangir. Placed next to her relic, Shah Jahan’s coin is a reminder of the countless histories forced into oblivion.

Art and language, two sides of the same coin 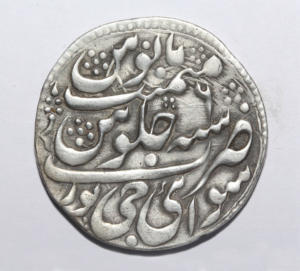 In Batin, Chasmawala gives the Arabic script an aesthetic form that she can recreate with real feeling. Placed alongside her vision, the Nazarana coin demonstrates how the written word can transform into art. During the Mughal era, rulers took pains to beautify their coins with calligraphy. Nazaranas were the pinnacle of this ambition. These coins are less about commerce and more in the realm of pure design. Minted at an extra fee for the sole purpose of gifting or offering as a ‘nazar’ or souvenir to a ruler, the Nazarana coin was brought out on special occasions and meant to be seen, not used. This coin was minted by Sawai Iswar Singh of Jaipur for the Nawab of Oudh, Nasir Haider, whose name it carries. The practice of gifting Nazarana coins was followed till the British period, when princely states minted coins in the name of Queen Victoria.

Chasmawala practices her script with the air of an outsider who struggles to understand a foreign sentiment and distills it to a succession of curves and lines. This same aesthetic-level engagement is evidenced in the colonial-era caption of this stereoscopic photograph of the Qutub Minar: “Giant Embroidery at the base of the Kutb Minar, Moslem pillar of victory”. The British photographic firm of Underwood and Underwood to whom this image is credited, failed to comprehend the wealth of information packed into these lines. Among the details contained in this ‘giant embroidery’ is the reasons for the building of this ‘tower of victory’, the year it was commissioned and finished, who commissioned it and many poetic words of praise for the patron.

The photographer here is mesmerised instead by the artful overlapping of the kufi and naksh scripts—and who can blame them. After all, the inventor of the cursive naksh script, Ibn Muqla, was given the title of ‘prophet in the field of handwriting’. Once again, we return to the kingdom of faith. Even as Chasmawala’s art questions her relationship with Islam, by using the same tools as the staunch believer, she takes her place in a long, storied tradition.