Walk through the narrow winding lanes of Jitwarpur on the outskirts of Madhubani town in Bihar and you’ll be reminded of William Archer’s words. “Maithil Painting is as natural and necessary as sweeping the courtyard or going to a well.” The art is such a regular part of life here that only outsiders stand and stare at it. To women walking to the hand-pump, boys cycling to school and wizened men sunning themselves on charpoys, this astonishingly beautiful art is part of the scenery. No more remarkable than a kingfisher eyeing the surface of a pond or a calf skipping alongside its mother. 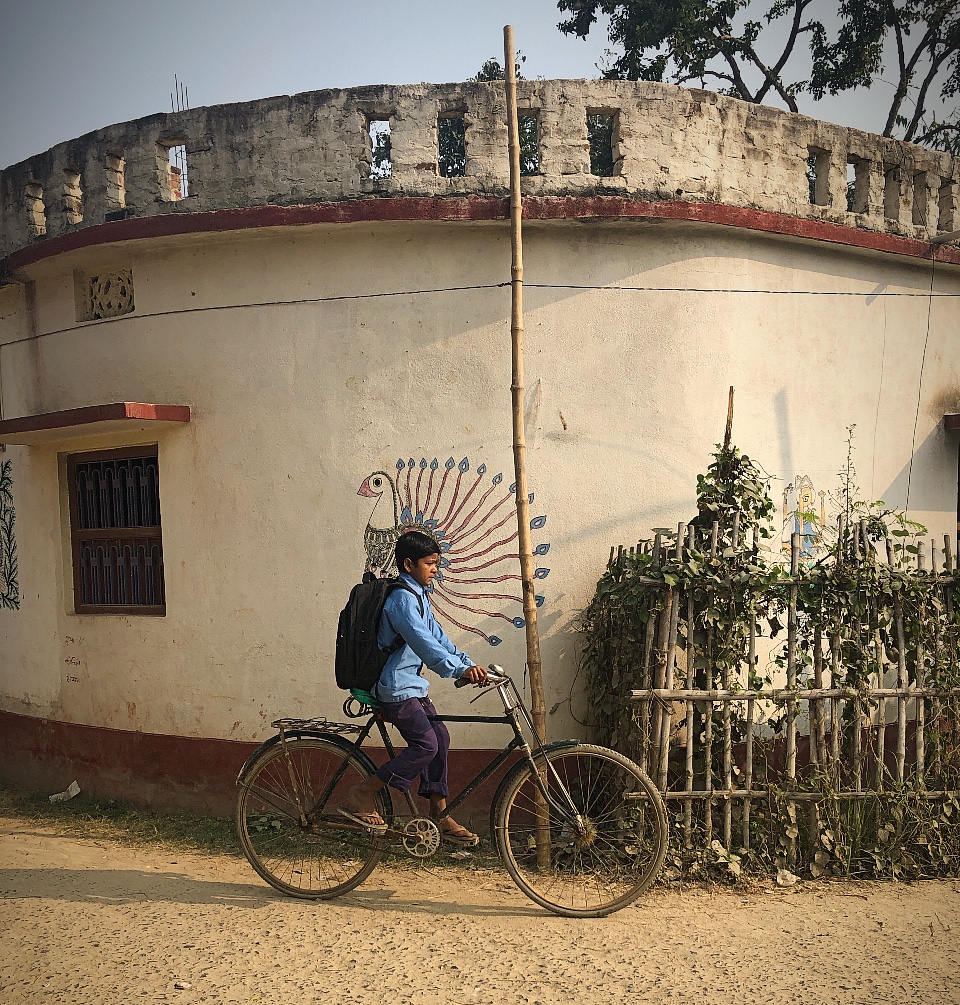 It’s not obvious from this bucolic scene that Jitwarpur has produced some of the country’s most legendary artists. Three of them were awarded the Padma Shri for their role in the genesis of Madhubani painting as we know it. They were Sita Devi, Baua Devi and Jagdamba Devi. In the ’60s and ’70s, these women were part of the first wave that carried the art from dung-smeared walls to crisp white canvases, thus freeing it to emerge from the shadows of domesticity to the adulation of the world stage.

In the winter of 2019, Sarmaya visited the home of one of these national treasures in Jitwarpur. We were there to document how two generations of the late Jagdamba Devi’s descendants are shaping the art to tell their own contemporary stories. What makes Madhubani unique even among Indian arts is that the skill is passed on by women. Precisely because it’s a domestic task like the ones Archer details, women owned it and ensured its propagation. Mothers taught daughters, who would after marriage receive further instruction in the art from their mothers-in-law. This too answers to the function of the painting, which is not just to beautify the home but also to attract blessings of fertility and marital bliss. 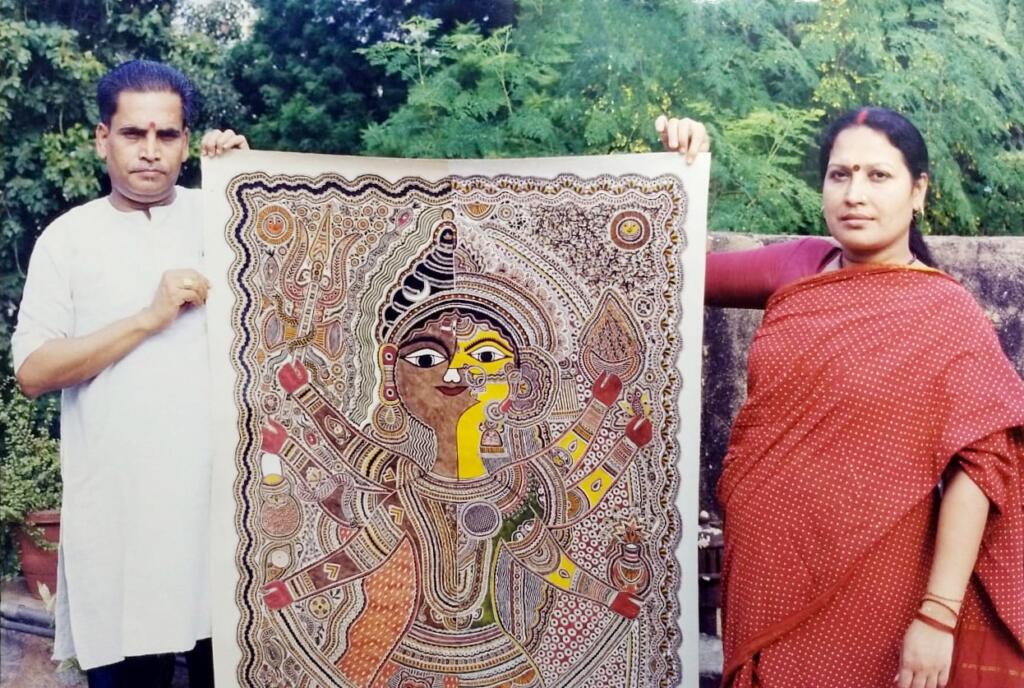 Satyanarayan and Moti Karn, photograph from the artist’s personal collection

Our collection features many works by one blissfully matched couple, Satyanarayan and Moti Karn. The son of Jagdamba Devi, the late Satyanarayan Karn was one of the few men of his generation to enter the tradition. He brought his own fine eye for detail to the craft and continued his mother’s legacy of using natural dyes and pigments. When he married, he taught his wife these skills and the couple began to paint together—you’ll see their joint signatures on many works in the Sarmaya archive. Moti’s lineage was no less stellar; her mother and aunt, Karpuri Devi and Mahasundari Devi, were contemporaries of Jagdamba Devi. As a young girl, she remembers accompanying them on a trip to Delhi to meet Pupul Jayker and Kamala Devi Chattopadhyay, both of whom advised then Prime Minister Indira Gandhi and played a crucial role in the revival of Indian arts and crafts.

“My mother and aunt were collaborating on a work together and I asked if I could join them,” Moti reminisces. “So my mother gave me my own board to paint on and I drew my favourite thing, a peacock. Pupul Jayakar saw this and liked it so much that I gifted it to her.” Moti regards her style to be influenced by three gurus. Her mother, mother-in-law and husband, with whom she shares a National Award and whose name she still signs on her paintings, even years after his death. Their spirit is strongly evident in her oeuvre, which is marked by a remarkable intricacy, ocean-deep, rich natural colours and profuse ornamentation. Much of this can be glimpsed too in the paintings of her daughter-in-law, Jyoti. 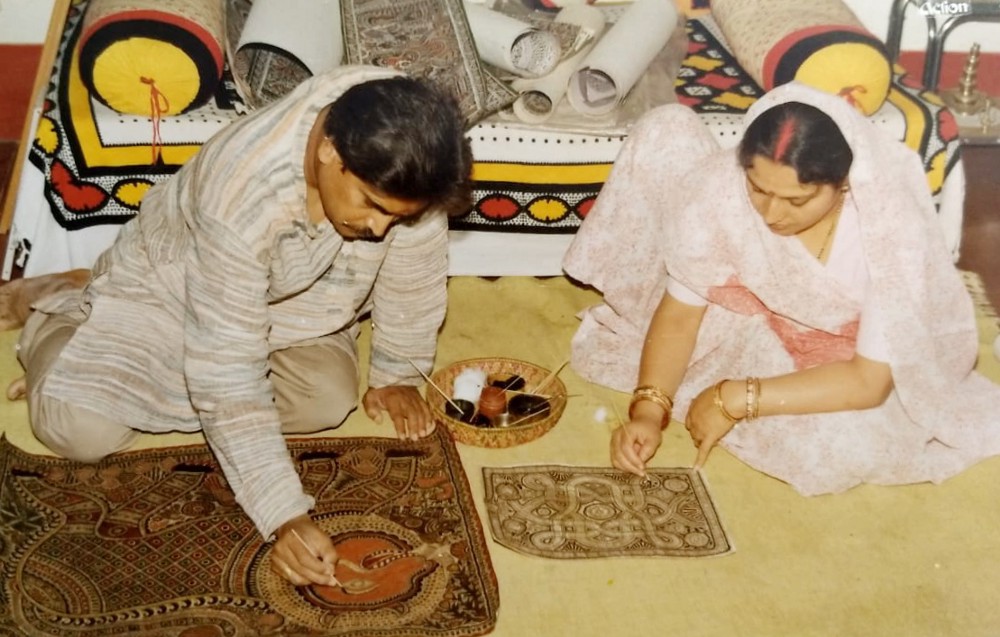 Satyanarayan and Moti Karn, photo from the artist’s personal collection

While Jyoti also grew up steeped in the artistic traditions of Madhubani, the world had opened up further for her generation; unlike her foremothers, she grew up in a liberalised India. Her parents dreams for her were centred around higher studies and career opportunities. Passionate as she was about art, it became relegated to the margins, surfacing now and then as a painting for the school magazine. Jyoti remembers hiding her art from her father, who was keen that his two daughters have as many opportunities for a good education as his son. It was marriage that brought her closer to her destiny as an artist.

Jyoti started to study painting seriously under the guidance of her parents-in-law, but in the early years of her marriage, it remained a hobby. When she was not working her IT job, she paint with them and assist with the art workshops they held. As she says in the film, it was not until the sudden death of her beloved father-in-law Satyanarayan Karn that Jyoti surrendered completely to her destiny as an artist. The tragedy was a catalyst too in changing how the young mother saw the function of art; Madhubani, she realised, was not just a beautiful form, it was also an unbroken line connecting the past to the future. Jyoti says, “I see myself as a torchbearer of Madhubani. It’s our responsibility to preserve this art for the next generation, just like our parents saved it for us.” 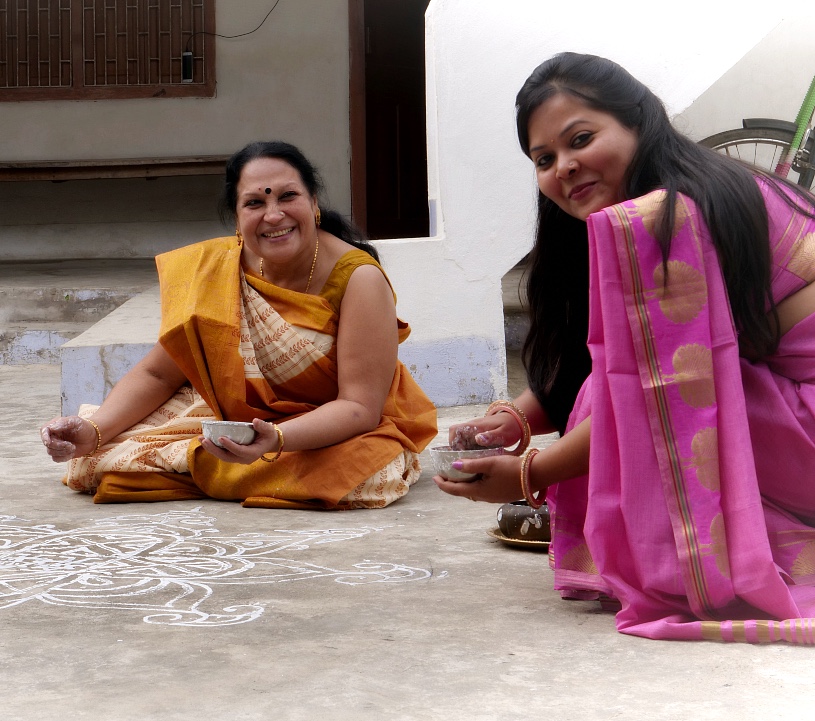 Moti and Jyoti Karn in their home in Jitwarpur, image courtesy Storyloom Films

In works created by Moti and Jyoti especially for Sarmaya, you can see this interplay between past, present and future quite clearly. Founder Paul Abraham explains, “Satyanarayan and Moti Karn shared a very deep bond and I think she draws upon the nostalgia of that time with him even today in her works. Their style is very unique and I suspect it evolved over years of working jointly to create a common stamp. The palette they used as well was deeper and darker than usual, and I personally prefer that to more bright colours. Jyoti’s work is much more graphic. She has continued with some of the traditional elements but in the new work she has done for us, there’s a slight shift. It’s geometric, graphic and modern. The palette too is much lighter.” 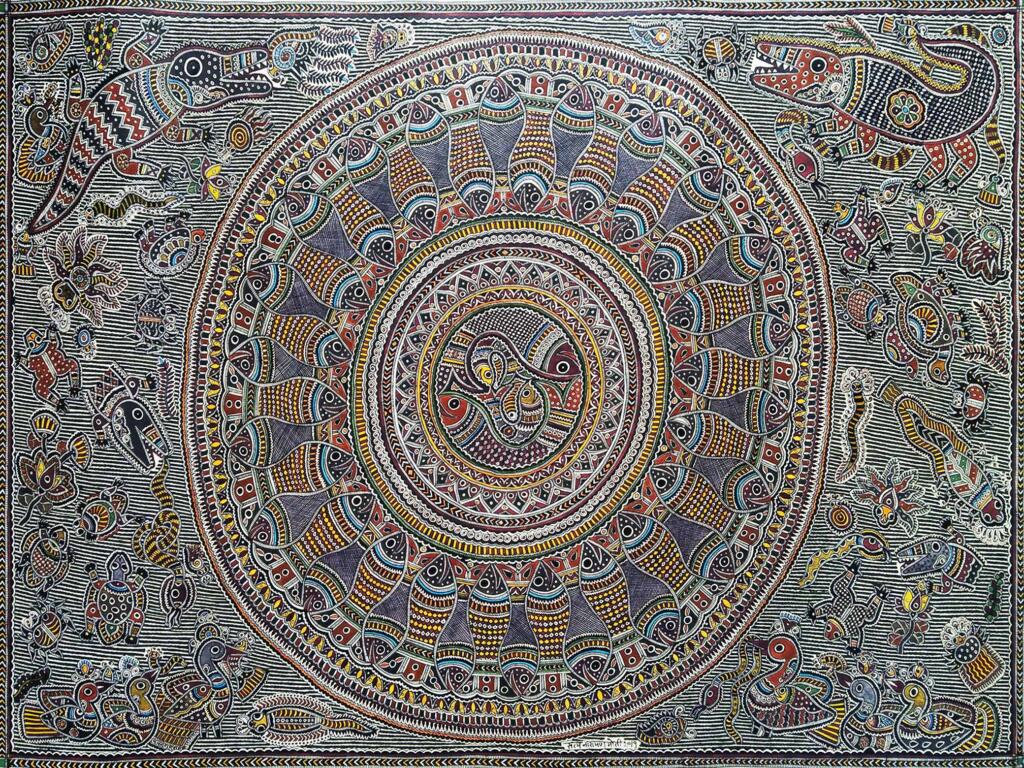 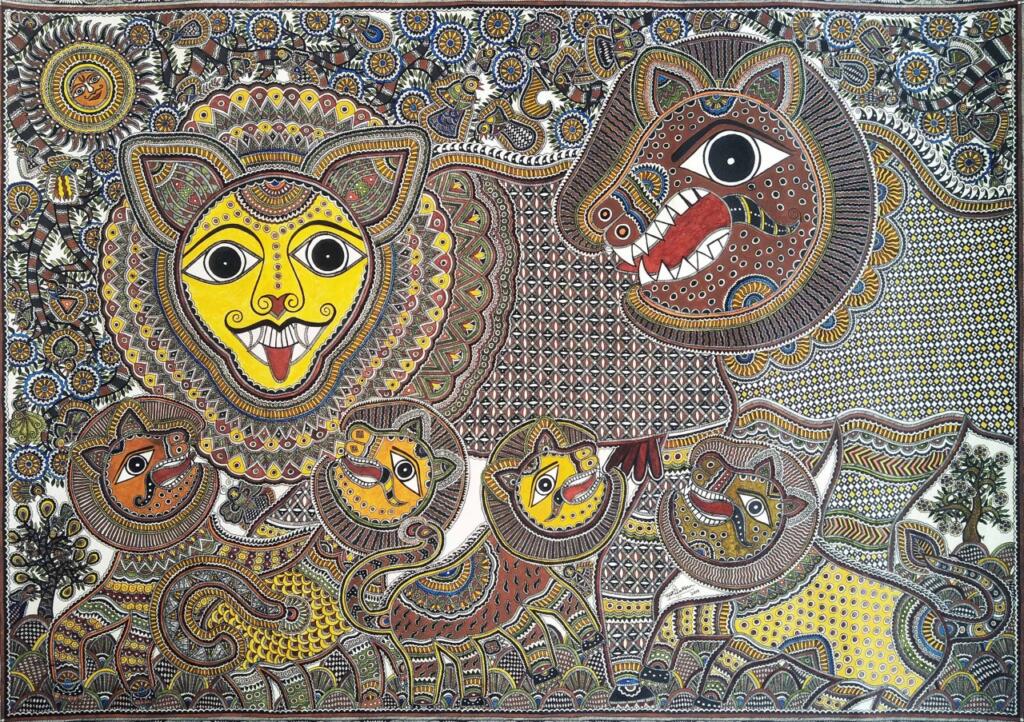 Sarmaya’s role in this passing of the mantle is that of patron, and chronicler. Through our collection, you can see how the art itself has evolved across time and from one community to another. The work of the Karns, however, occupies a special place. Paul has been working with and buying from the family for years now. He explains, “Being part of a family with an artistic legacy gives you a depth of experience to draw from. But there’s also pressure to stand out and have a signature style. This creates a beautiful, positive energy of trying to do things differently without moving too far from the oeuvre and its rigours.”