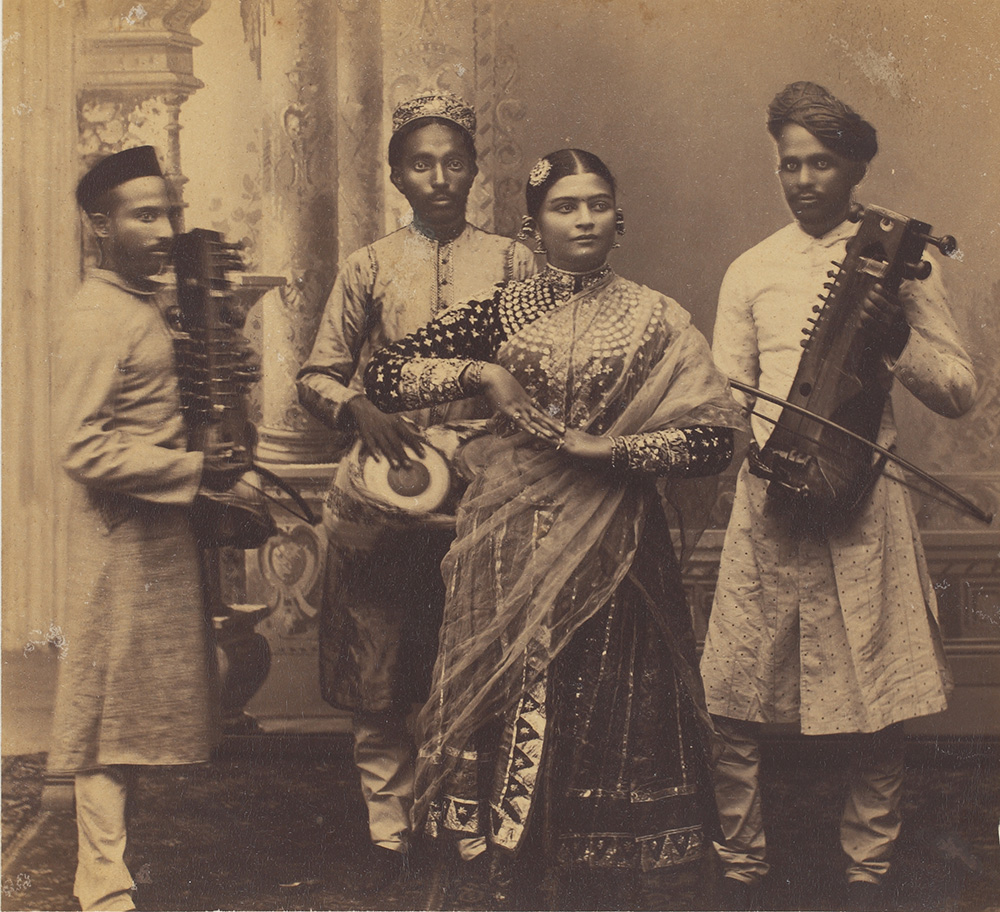 From the album ‘Musicians and Dancers’ with silver gelatin prints shot by Gobindram and Oodeyram of Jaipur, 1880s

From pre-Vedic civilizations dating back to as early as 6000 BC, and right through the trials and tribulations of the British Raj, and after, clothing in the Indian subcontinent has undergone considerable transformation. According to author and historian, Roshen Alkazi, cut and sewn clothing came into South Asia from Central Asia. While we let sewn attire into our wardrobes, unlike our western counterparts we didn’t give up on our signature drapes, which continues to be an important part of the subcontinent’s unique aesthetic. With the advent of the conservative Mughals in the 16th century, our largely unisex silhouette profile forked into male and female versions. This gender gap only expanded with the British Empire taking over and our dress codes getting further submerged in colonial ideas of appropriateness and patriarchy.

It’s illuminating, then, to examine the definitive silhouettes of India—illustrated thorough a series of archival photographs and illustrated plates from Sarmaya’s collection—and see how they’ve functioned as signposts of the eras that birthed them. Each form evolved in response to the socio-political codes of the time. Stripped of their embellishments, it is easy to see that these silhouettes were class-agnostic—the distinction between humble and ostentatious made by the choice of textiles and surface ornamentation. What’s also intriguing in this context is the photographer or documenter’s gaze, which, in most cases, represented a foreign eye. 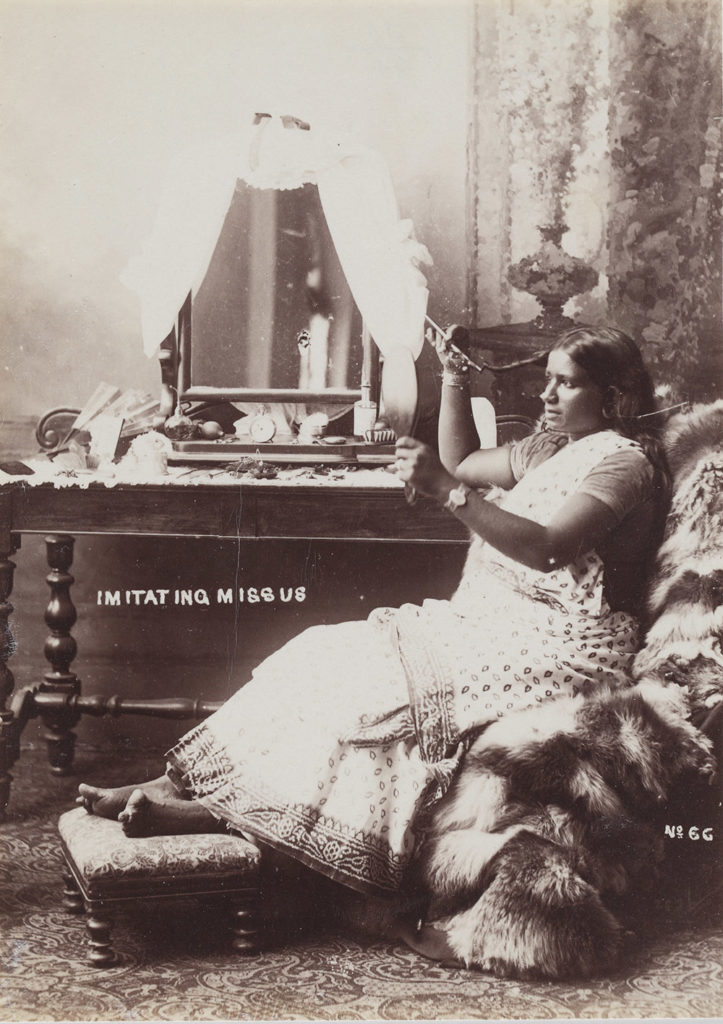 ‘Portrait of a Lady in front of the dressing table’, 1890-1930, by an unidentified photographer

In India, among both men and women, there’s always been a tradition of wrapping and draping unstitched cloth around the body. From the humble kaupina or langot, a rectangular strip of cotton cloth used to cover the genitals, to the elaborate drapes of the sari, as a culture we’ve always appreciated fluidity in form. Over time, the loincloth expanded to become the antriya or the lower drape from which the dhoti emerged. Sculptures from the 2nd Century BC show the ancient dhoti or antriya worn by both sexes. The lungi and veshti also seem to have evolved from the same source.

Similar to the antriya is the uttariya, an unsewn cloth or scarf draped on the upper part of the body. The uttariya evolved into the dupatta, also known as chunari or chunni, initially worn by both sexes. A combination of the uttariya and antriya led to the creation of the sari, which in its modern form came into existence in the post-Mughal period as evidenced in the miniature paintings of the time.

The sari is believed to carry influences from Greece, Persia and several other Central Asian countries. Bharata-muni’s Natya Shastra, dated between 1st and 3rd Century BCE, refers to the navel of the supreme being as a source of life and creativity. This may be the reason the midriff is usually left exposed in most Indian drapes. Another common thread that runs across most Indian drapes is an inherent sense of comfort and practicality as highlighted in these photographs: a group of palanquin holders taking a break from their labor intensive job and a woman lost in thought at her dressing table. Notice how the palanquin holders (below) have tied their gamchas or towels around their waist. Similarly the woman (above) has tucked the loose end of her sari or the pallu into the waist area. 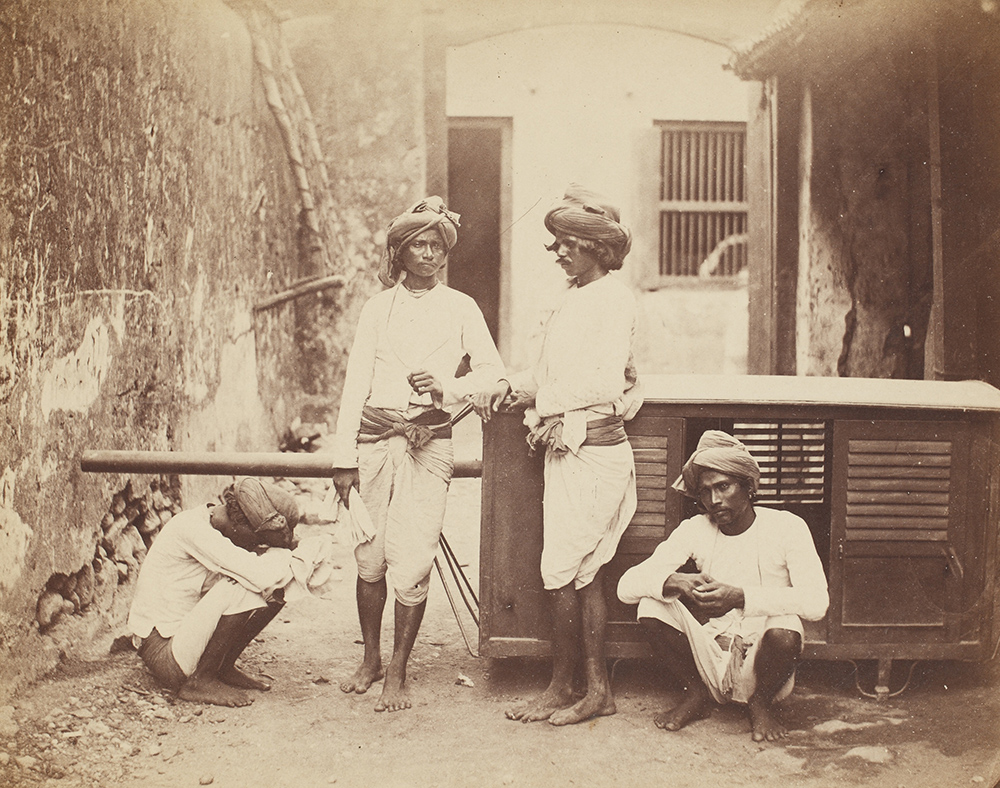 A Modest Proposal: The bodice 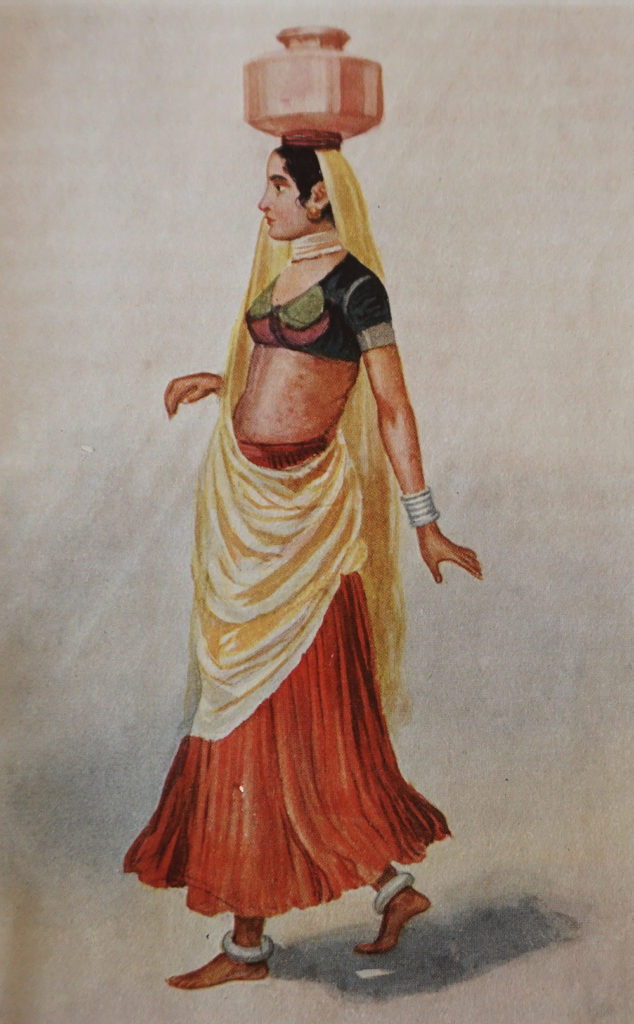 ‘Water Carrier from Ahmedabad’, an illustration by MV Dhurandhar from ‘Women of India’ a book by Otto Rothfeld

The choli or the female bodice is said to have evolved from the kanchuki or stanapatta, a piece of cloth worn across the breasts. The kanchuki finds mention in many pieces of ancient literature including the famous Rajatarangini by Kalhana from the 12th Century CE. Some researchers believe that sewn cholis were unknown before the British arrived in India, and were mainly introduced to satisfy Victorian ideals of modesty. The most common form of the choli is of course, the tight-fitting bodice that ends just below the breasts or just above the waist and is typically worn under the sari or paired with lehengas and skirts. But early cholis were covered in the front and fastened at the back with strings. This style can still be seen in parts of Gujarat and Rajasthan. In certain southern parts of India, the choli was called ravike and fastened in the front.

This illustration (above) featuring a water carrier from Ahmedabad, is taken from Women of India, a book by Otto Rothfeld, an officer in the British administrative services in the 1920s, with illustrations by Rao Bahadur MV Dhurandhar, then headmaster of the JJ School of Arts, and was published in 1928. Notice how the choli is cut close to the body with sewn panels to accommodate the contours of the bust. The panels in contrasting colours suggest that this particular choli might have done very little to satisfy the prude sensibilities of its enforcers.

Perfect asymmetry: The jama and angarkha 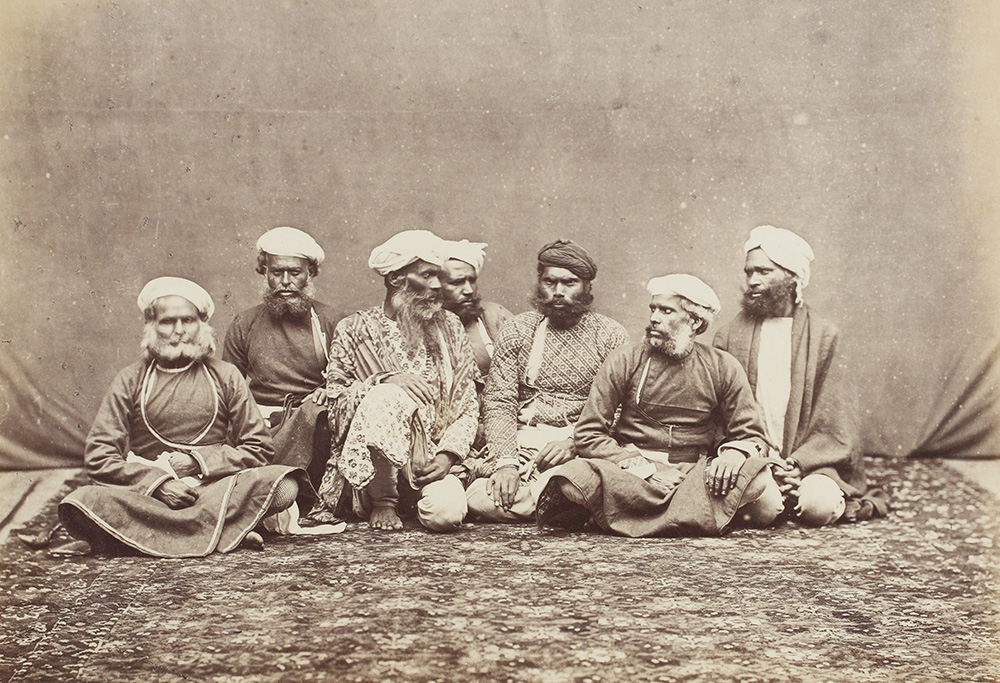 As people began to emulate the Mughal way of life and dress, cut-and-sewn clothing spread and flourished in India. An item that gained popularity in the subcontinent during this period was the jama, a traditional upper garment for men worn overlapping in the front and tied to the left or right shoulder. Emperor Akbar ordered that Hindus to tie their jamas to the left and the Muslims to the right so as to be able to distinguish between the two.

From the 1600s to 1900s, the jama underwent many changes in its length, volume and style, and from the 1800s, it began to be replaced by the angarkha, especially in western India. The term angarkha is derived from the Sanskrit word angaraksaka, or that which protects the body. The angarkha was characterised by a round-edged or triangular opening in the front, set against an asymmetrical panel called the pardah. It was traditionally worn with a sash known as patka, from which a sword could be suspended, and the kamar-band wrapped around the waist to keep the entire outfit in place. Notice the folds of the cloth and the contrasts in this elegant photograph of a group of men dressed in plain and printed angrakhas. 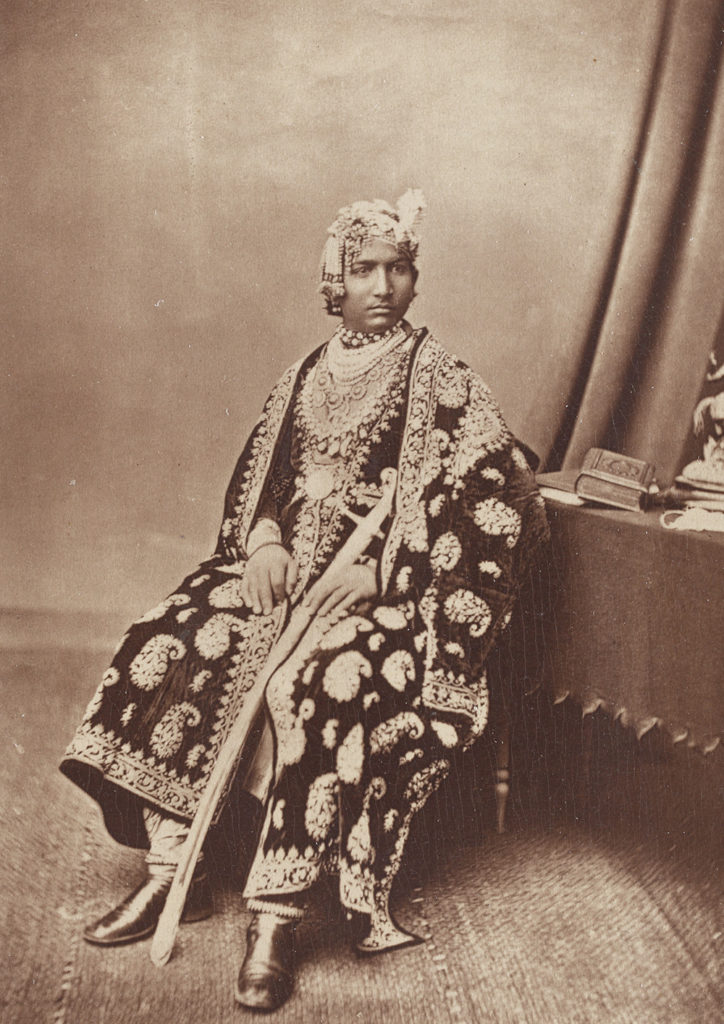 Portrait of an unidentified royal by Colin Murray

The Indian coat evolved from the choga and chapkan to the more streamlined achkan and sherwani styles that are worn today. Band collars and buttons on the chapkan lent it the feel of a coat, while its lower part remained flared like the angarkha. Gradually, as the lower part became narrow, it started to be known as the achkan. The removal of the seam at the waist was another significant development. Like the angarkha, the achkan was worn with a patka and the kamar-band.

The sherwani originated as a fusion of the British frock coat and the achkan during the later part of British rule in the Hyderabad court of the Nizams. It has a more streamlined silhouette and opens in the front. The sherwani was considered acceptable European-style court dress among noblemen and royals. As photography evolved so did the silhouette of the Indian coat as shown in these photographs: a royal prince dressed in an ornate choga (above) and the Nizam Osman Ali Khan of Hyderabad in a sleek sherwani layered with his signature jewels (below). 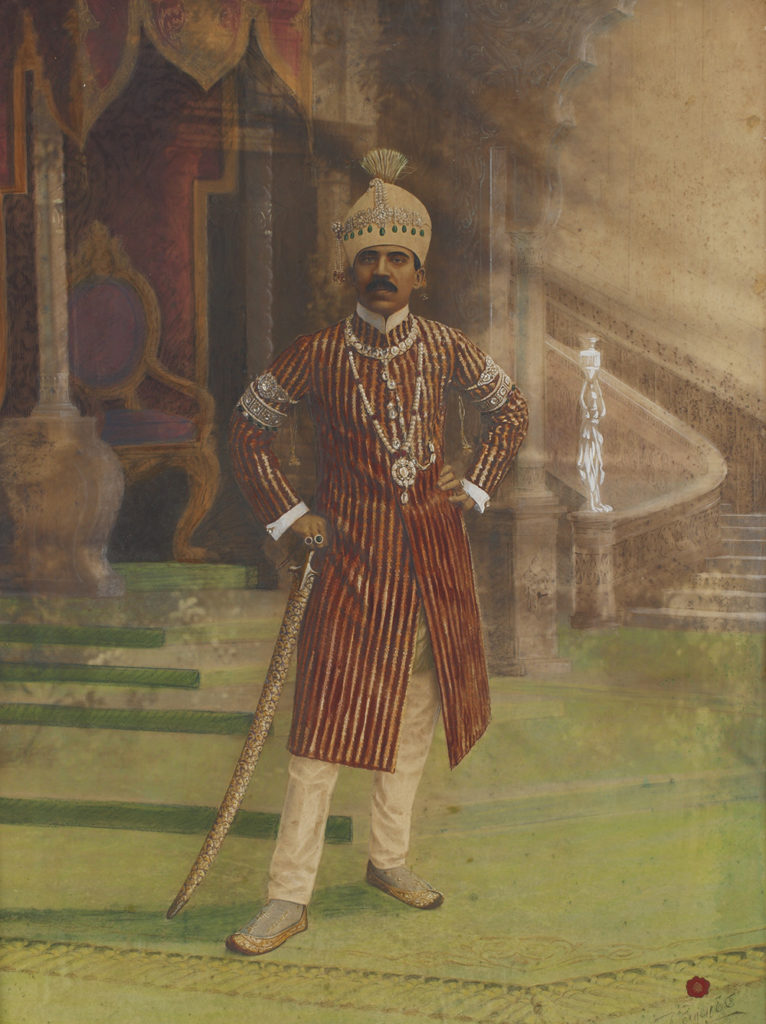 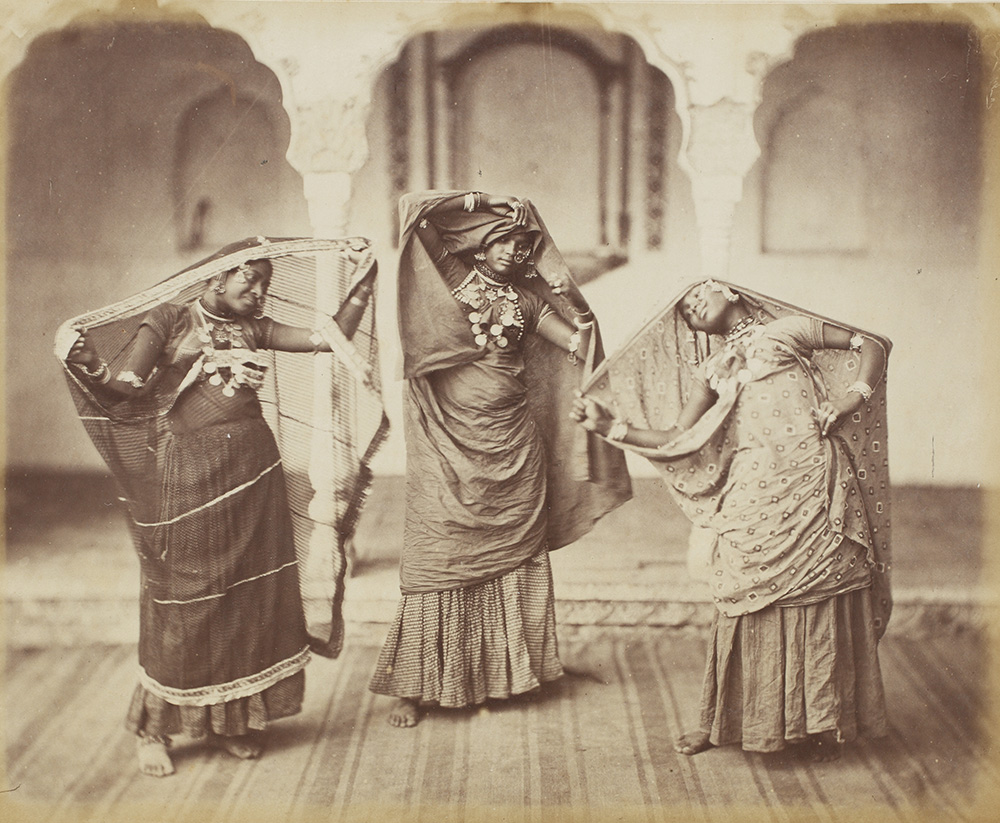 The Indian circle skirt, known as the lehenga or ghagri (also chaniya in Gujarat and langa or pavadai among Telugu and Tamilians), finds its origins in the fishtail-style antriya worn by women in ancient India. Early 17th-century Rajput miniatures depict a white cloth or sash attached to the lehenga. This patka was added to control the volume of the antriya. Lehengas saw a dip in popularity when the sari was adopted as a power dressing move by women freedom fighters in India. Soon lehengas were worn largely by women in rural areas and the more elaborate versions were reserved for special occasions. In the south, skirts came to symbolise girlhood and were worn with the onset of puberty. In this photo, a group of nautch girls appear to be mid-dance, all dressed in lehengas, paired with cholis and dupattas covering their torsos and heads.

Tunic tales: The kurta or kameez 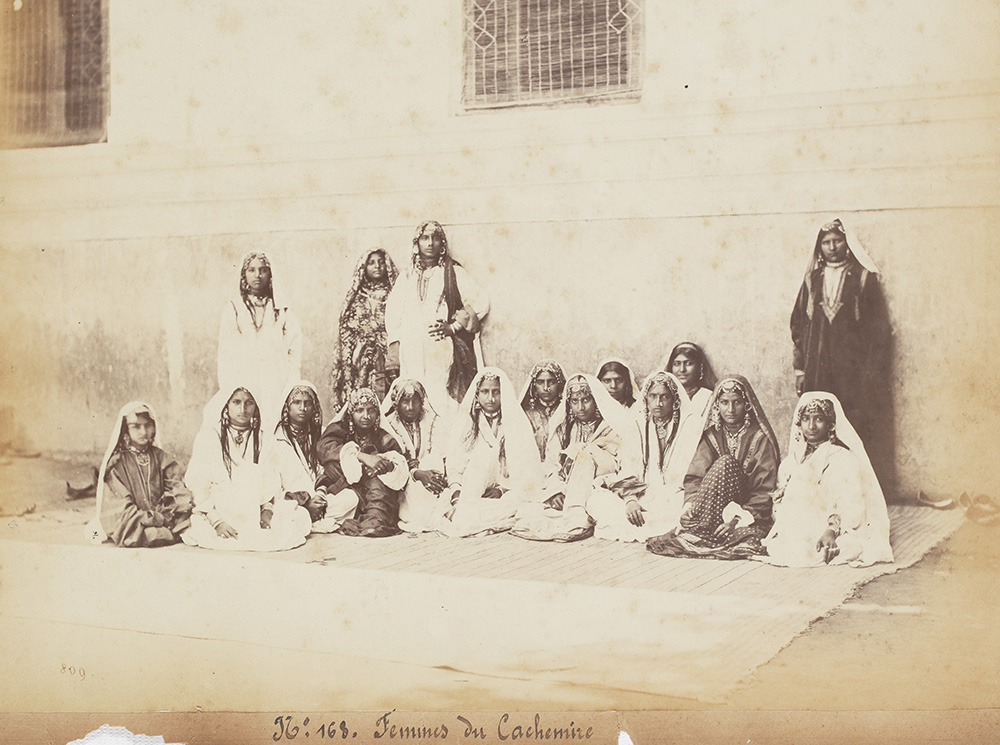 Worn by men and women in the subcontinent, the kurta or kameez trace their origins to tunics worn by Central Asian nomads. The side seams are left open below the waist giving the wearer greater freedom of movement. The shalwar and kameez were introduced in South Asia with the arrival of Muslim rule in the 13th century. The term kurta is derived from the Persian kurtah while kameez comes from the Arabic qamis, which in turn borrows from the late Latin camisia, also the source of chemise. In Kashmir, the tunic takes the form of layered robes called pheran and poots. Pheran comes from the Greek word apron. At what appears like a special occasion, a group of Kashmiri women (above) are pictured with their heads covered wearing embellished pherans. 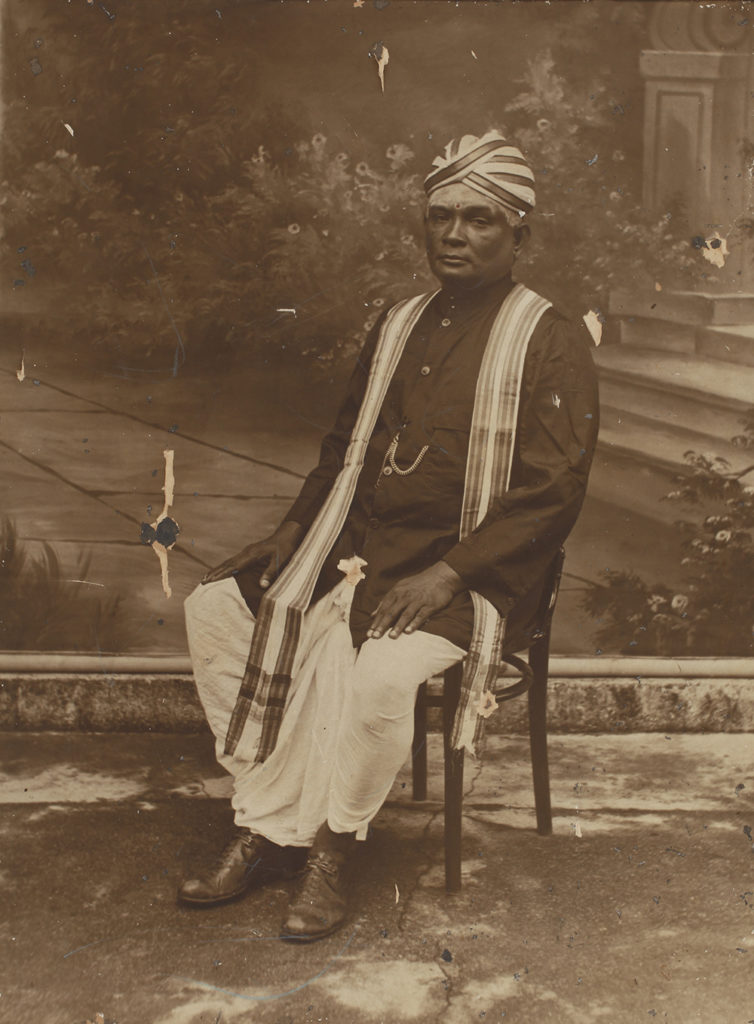 The Jodhpuri suit or bandhgala is a formal evening suit featuring a high-necked coat, and trousers. As the name suggests, it originated in the Jodhpur state in British India, as a cross between the angarkha and the western suit jacket. The bandhgala quickly became popular as formal-wear across Rajasthan and eventually throughout India. It’s a product of the times when people in the Subcontinent began to perfect tailoring techniques and clothes were cut to fit the body snugly. These photos show the bandhgala styled in two different ways— paired with matching trousers and the dhoti respectively. 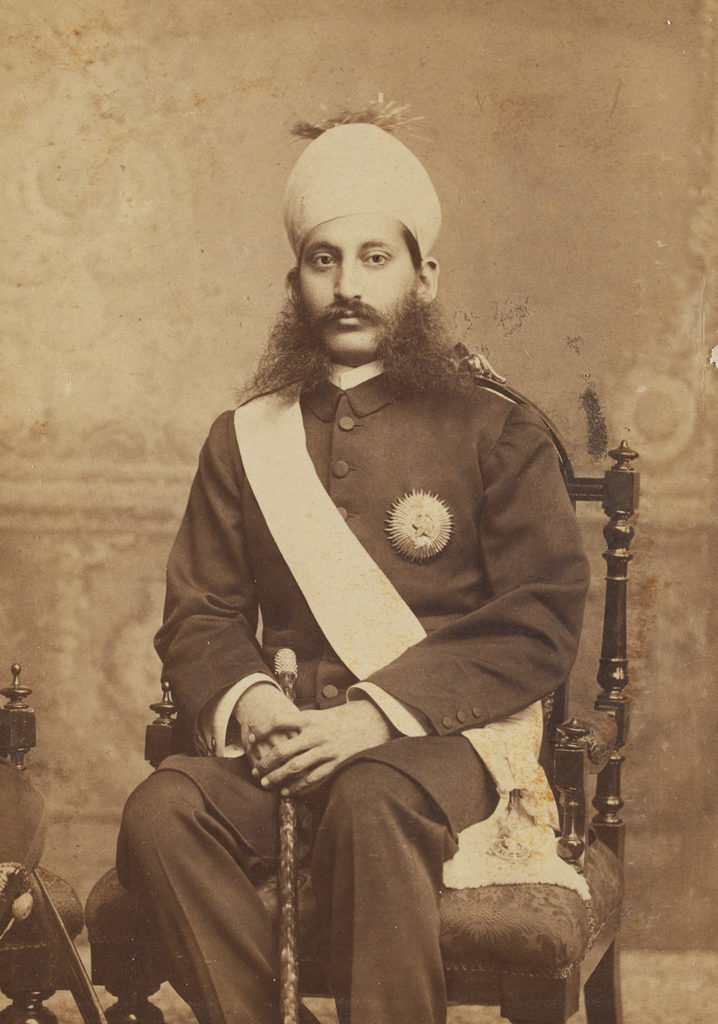 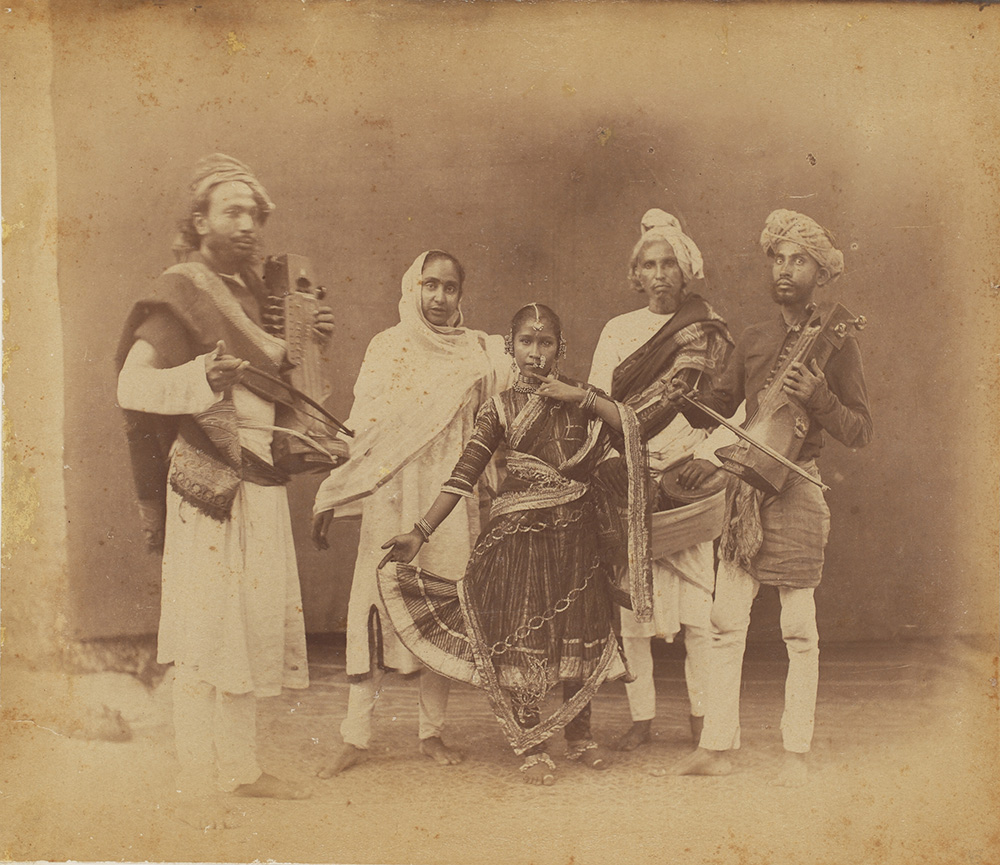 From the album ‘Musicians and Dancers’ with silver gelatin prints shot by Gobindram and Oodeyram of Jaipur, 1880s

The anarkali silhouette, born in the city of Lahore in present-day Pakistan, comprises a long, frock-style top worn with a slim-fitted bottom. The anarkali kameez is fitted on the bust and from under it emerge large pleats that gather, bunch and flow gracefully around the legs. The kalidar kurta, a predecessor to the anarkali, gets its name from its several geometric panels or kalis and it was worn by both men and women in Mughal India. The anarkali’s etymology is attributed to a courtesan of the same name, believed to have existed in the court of Emperor Akbar. Court dancers favoured this particular style in various lengths as it gave them the freedom to dance the mujra and execute its characteristic spins. The voluminous silhouette also lent its necessary visual drama.

By a string: The pajamas 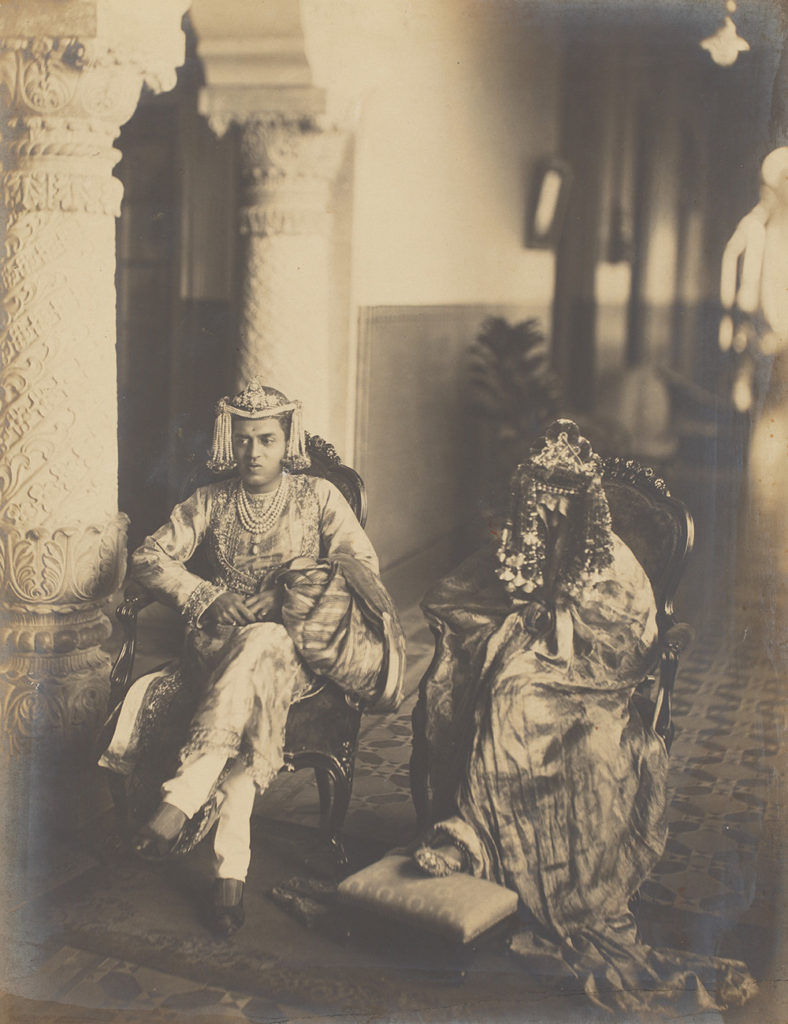 Narrow close-fitting trousers or churidhar pajamas were favoured by both men and women, especially in the Mughal era. Churidars are a variant of the common shalwar pants, fastened with a string following Iranian and Turkish tradition. Shalwar pants are cut wide at the top and narrow at the ankle. Churidars, on the other hand, are narrow around the knees down to the ankles, closely following the contours of the calves, and thereby creating a slender silhouette. Churidhars are cut on the bias making them naturally stretchy— they are also longer than the leg and usually finished at the ankle with a tightly fitting, buttoned cuff. The excess length falls into folds appearing like a set of bangles, hence the name churidar (derived from the Hindi churi). The British called them Moghul breeches. The narrow silhouette helped balance proportions of flared upper garments like angrakhas, chogas and anarkalis. In what appears to be his wedding photo, a groom pairs his embellished angarkha with classic white churidhars.