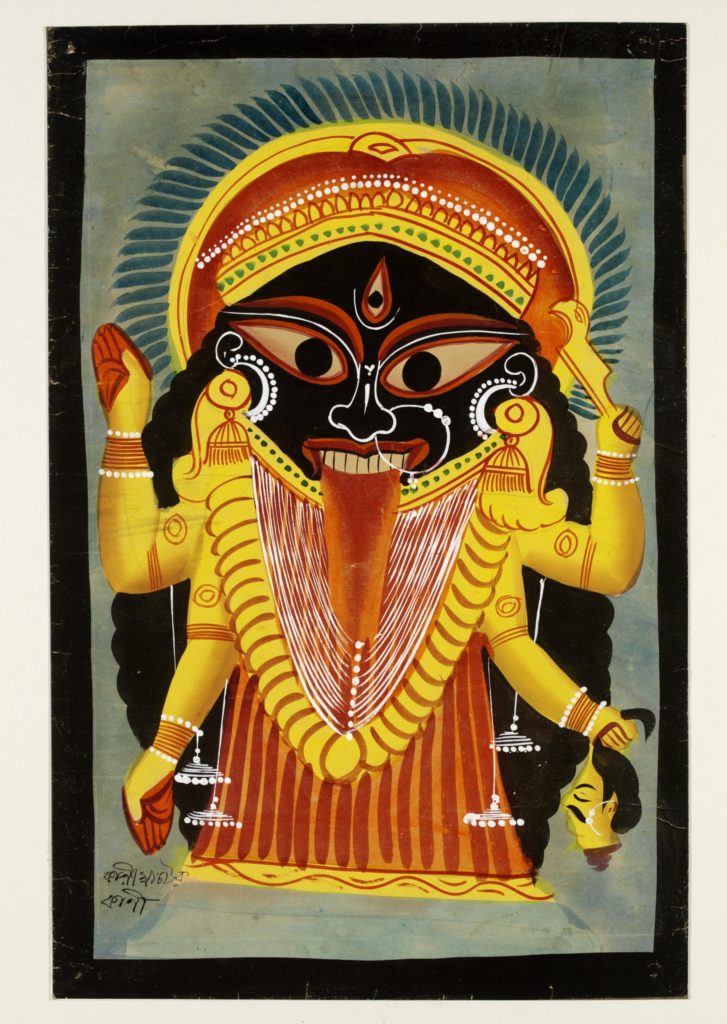 A few years back, on a humid summer afternoon, I found myself climbing the 300 odd-steps to the Kamakhya Temple in Assam. Situated on a hilltop close to Guwahati, it’s one of the most important Indian Shakti pithas, which are cosmically significant locations to believers of the divine goddess or Shakti. The temple welcomes a large number of devotees, scholars and curious tourists from around the world every year. Making my tedious way up, I was struck by the number of souvenir shops lining the stairs. From the mundane terracotta diyas to overpriced ‘puja thalis’, from beautiful lotus bundles fresh from the pond to pictures of goddess Kamakhya in kitschy golden frames, they had it all!

Kamakhya isn't the only temple to fall victim of the temple-bazaar trend. All across the country, souvenir shops line the dusty streets that lead to major shrines and clever salespeople have gimmicked their way into pious patrons’ pockets for almost as long as temples have existed. One surefire way to do that was through souvenirs, which were a handy way to carry a piece of the holiness back home.

In 19th-century Calcutta, the cottage industry of temple souvenirs gave birth to a whole new style of painting, one  that inspired artists like Jamini Roy to reimagine the very meaning of modern Indian art. Kalighat paintings are named for the temple by that name to the Goddess Kali, which had grown in prominence and become a popular tourist destination in the 1800s. In order to capitalise on the new market, patua artists from rural Bengal migrated to the big city and set up shop here.

Originally belonging to a community of itinerant bards, the patuas created long vertical scrolls (patas) that acted as props during their storytelling. Now they had to adapt to the new market of pilgrims who wanted something more portable and easy to display than scrolls. So the artists began creating pictures of single deities or episodes from mythology.

The issue of style resolved, now the artists had to scale up. Patuas developed innovative ways to keep up with rising demand by mass producing their paintings. They would make quick sketches with broad, fluid brush-strokes and maintain a repetitive quality in the themes and iconography. Kalighat paintings were meant to be dashed off quickly, cheaply and in huge quantities. 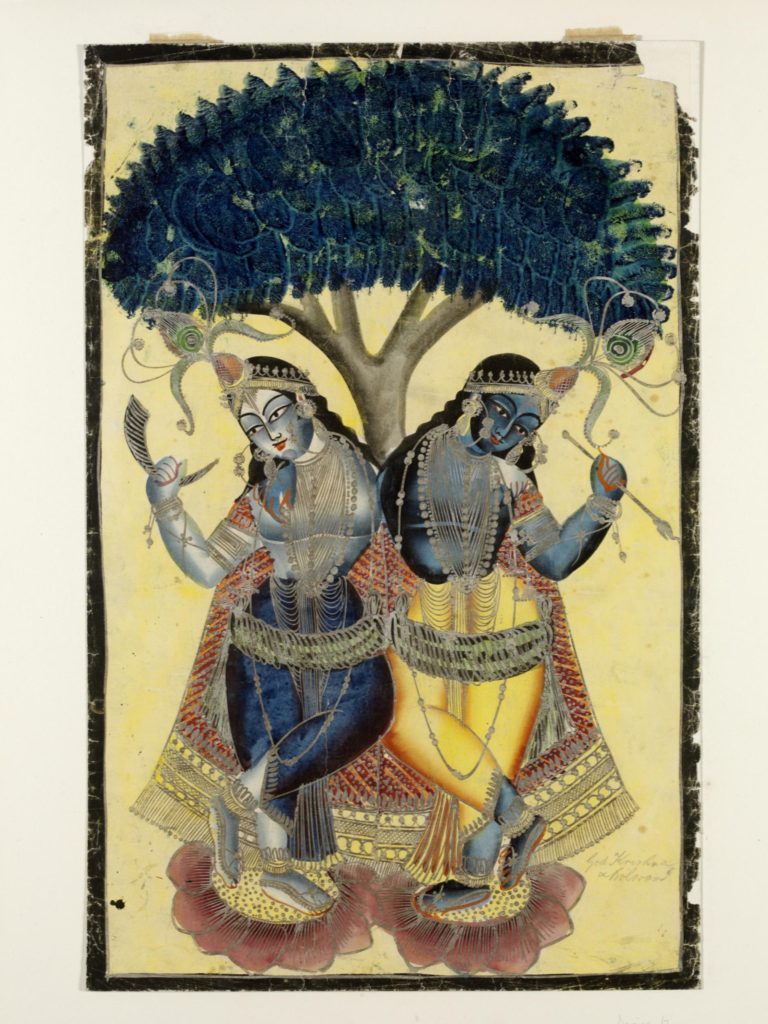 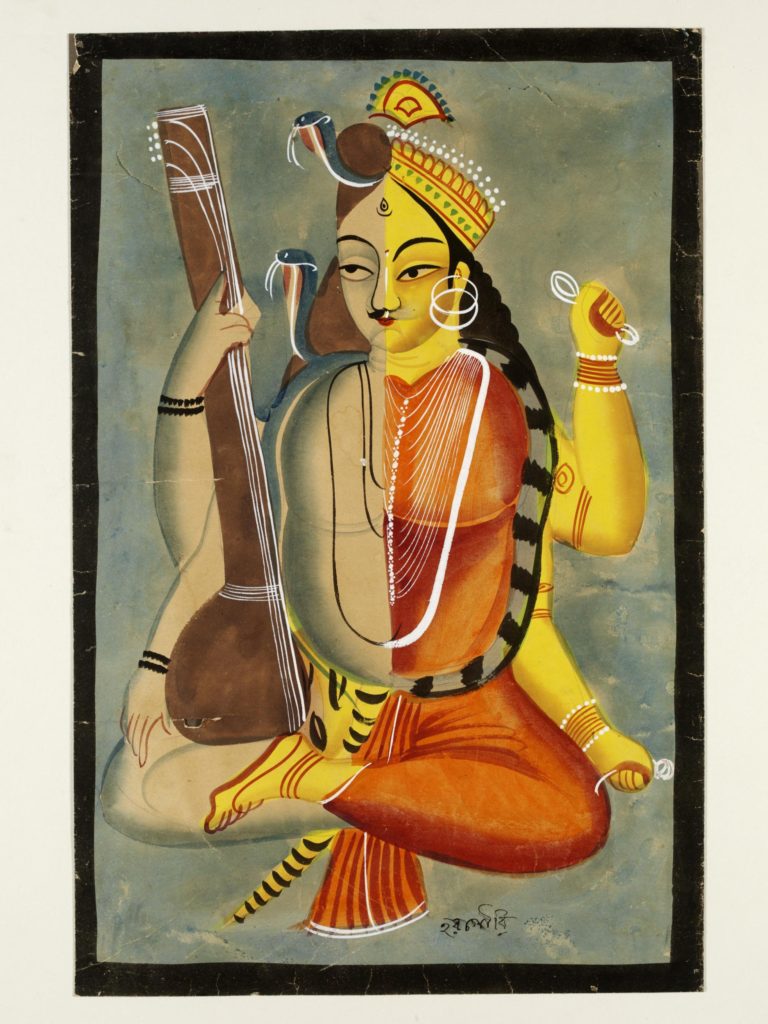 Given the mood of the neighbourhood, patuas began making these paintings along religious themes but soon moved to a more secular domain with observations on big-city life, commentary on social mores and oddities, and current affairs too. The 18th-century rise of the culture of the Bhodrolok (the English educated ‘refined’ Bengali) was a popular topic for lampooning through satire. 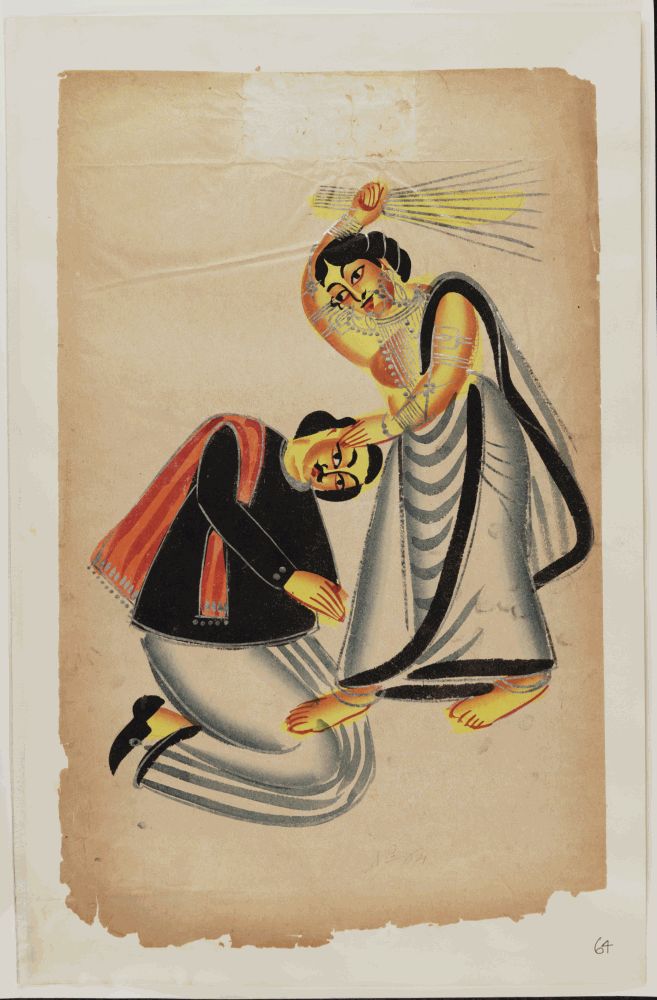 Woman hitting a man with a broom © Victoria and Albert Museum, London 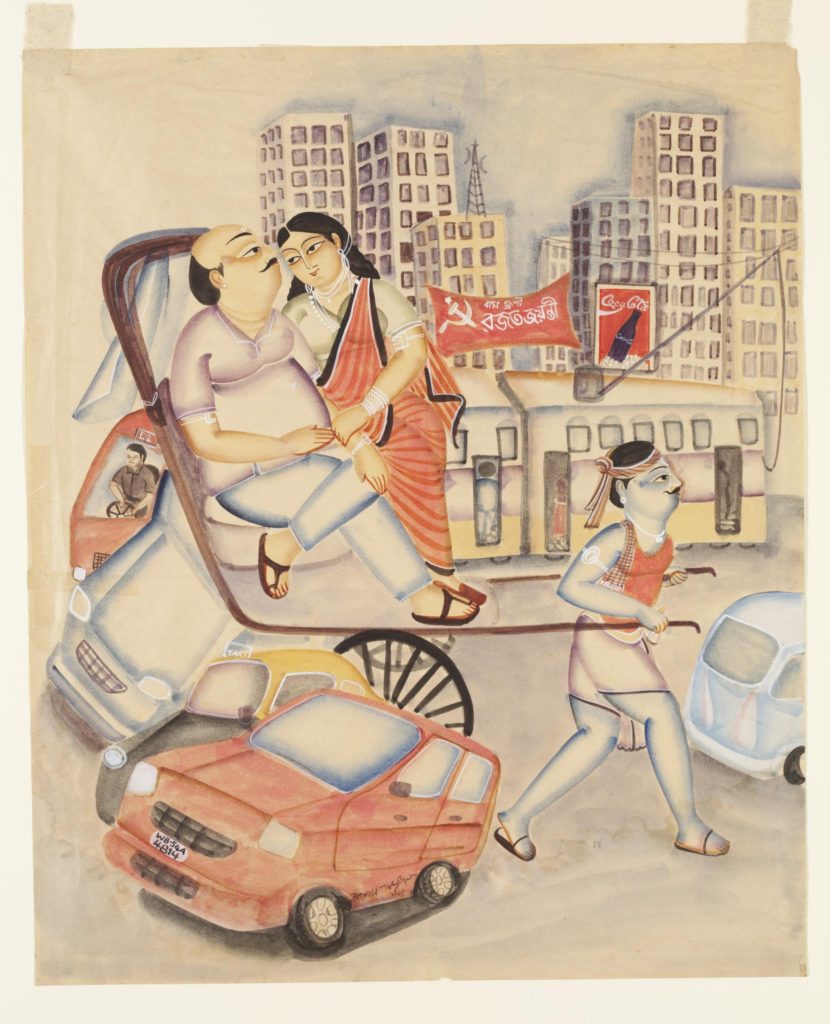 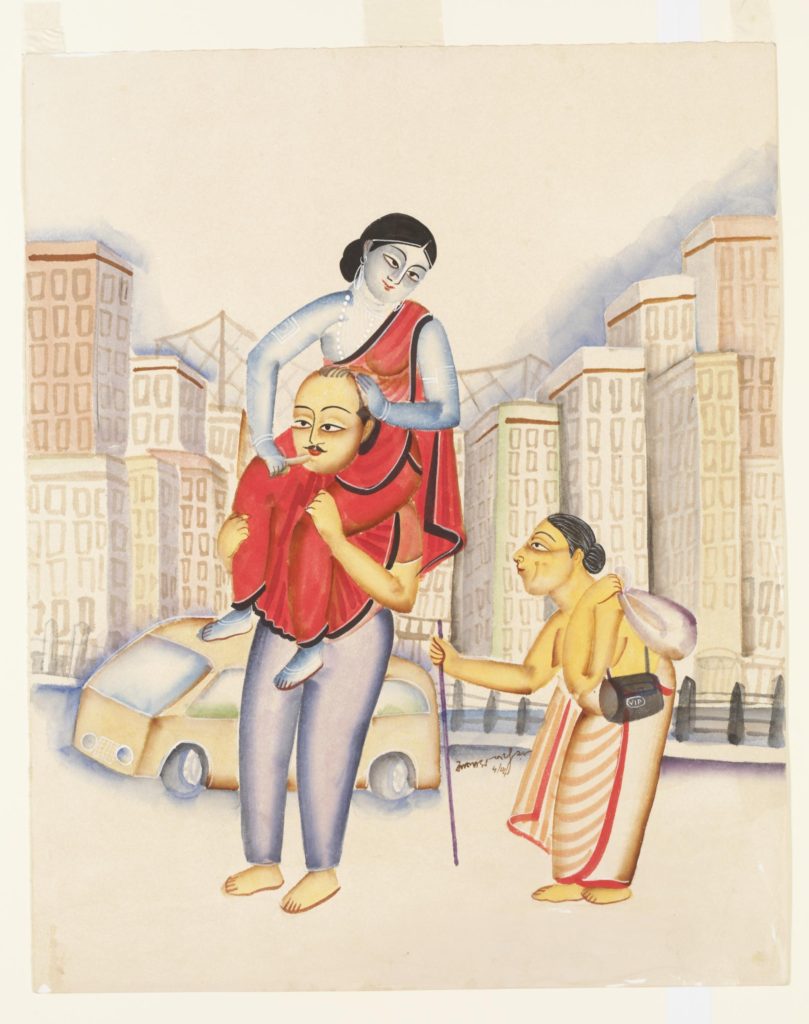 Then came the Tarakeshwar murder case of 1873, one of Calcutta society’s biggest public scandals. It involved a civil servant Nobin Chandra Banerji, his sixteen-year old wife Elokeshi and the head priest of the Tarakeshwar temple. Elokeshi and the priest have an affair, Nobin finds out and chops off his young wife’s head with a fish-knife. The murder is reported, the priest is jailed and Nobin gets life imprisonment.

The murder trial generated an unprecedented amount of public outcry in Calcutta.  The local papers regularly reported court proceedings, entry tickets were sold to gossip-hungry audiences who lined up outside the court every morning and the husband was released within two years of his imprisonment, thanks to a sympathetic public petition.

When all of Calcutta had only one thing to talk about, how could the Kalighat patuas be left behind? Seeing a commercial opportunity here, artists began illustrating the scandal. There were paintings of Elokeshi and the priest dilly-dallying, Nobin killing her with a knife, Elokeshi’s lifeless body lying in the middle of the courtroom…and they all sold like hot cakes. As before, the series developed its own iconographic repertoire and artists produced ‘Elokeshi’ paintings well into the early-20th century! 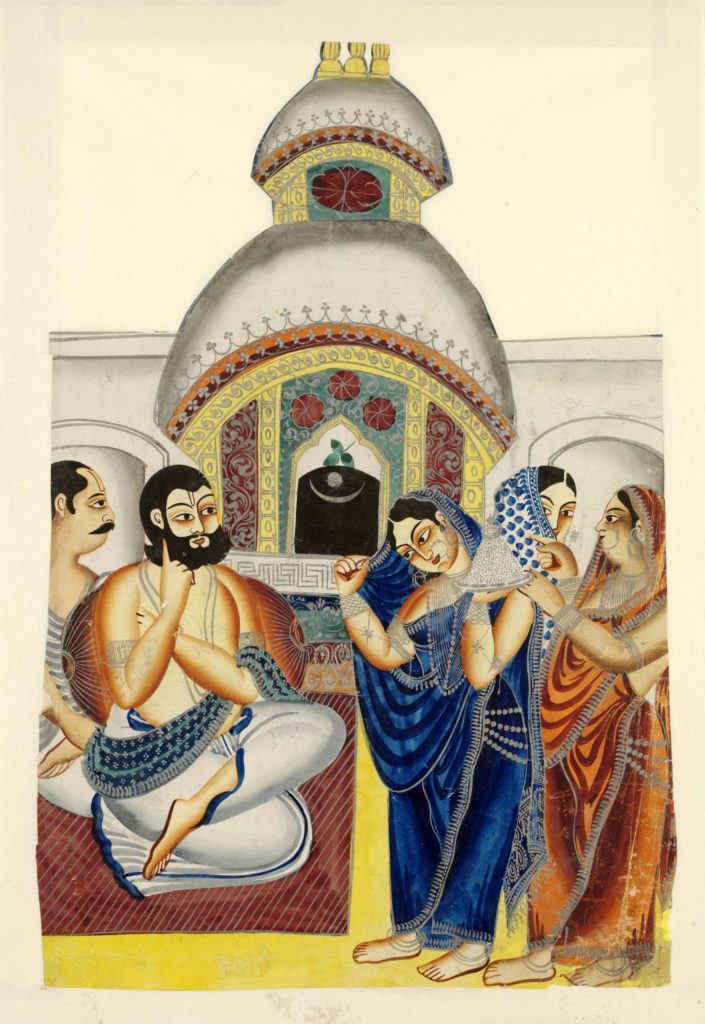 ‘The first meeting of Elokeshi and Mahant’, 1880 © Victoria and Albert Museum, London 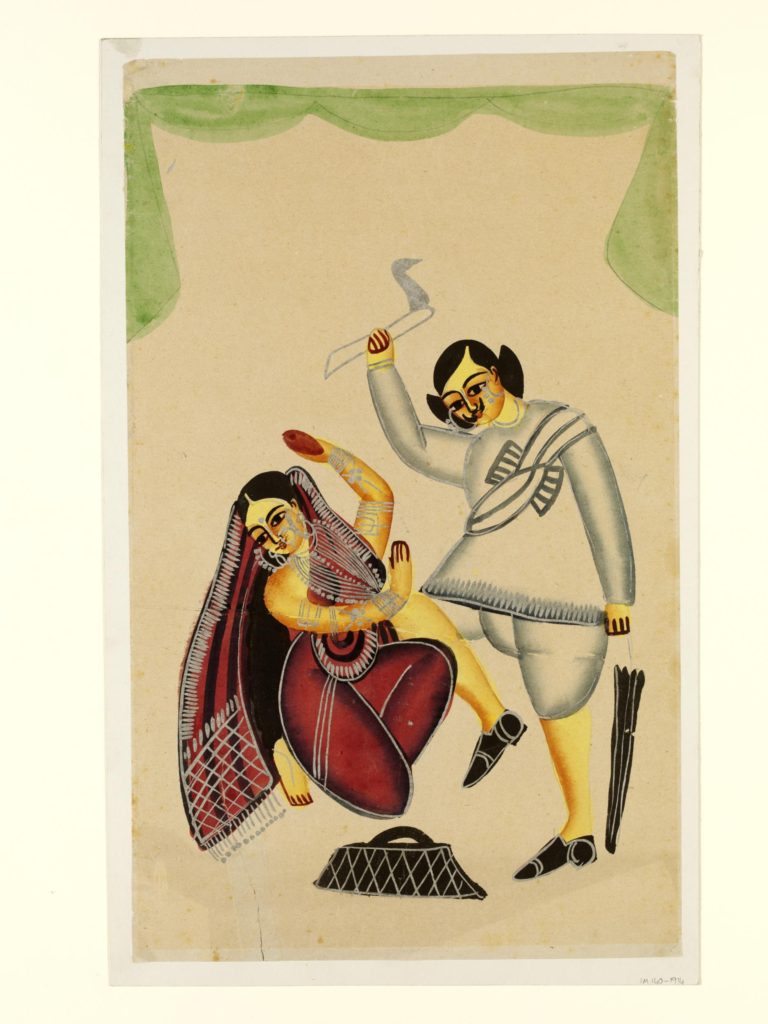 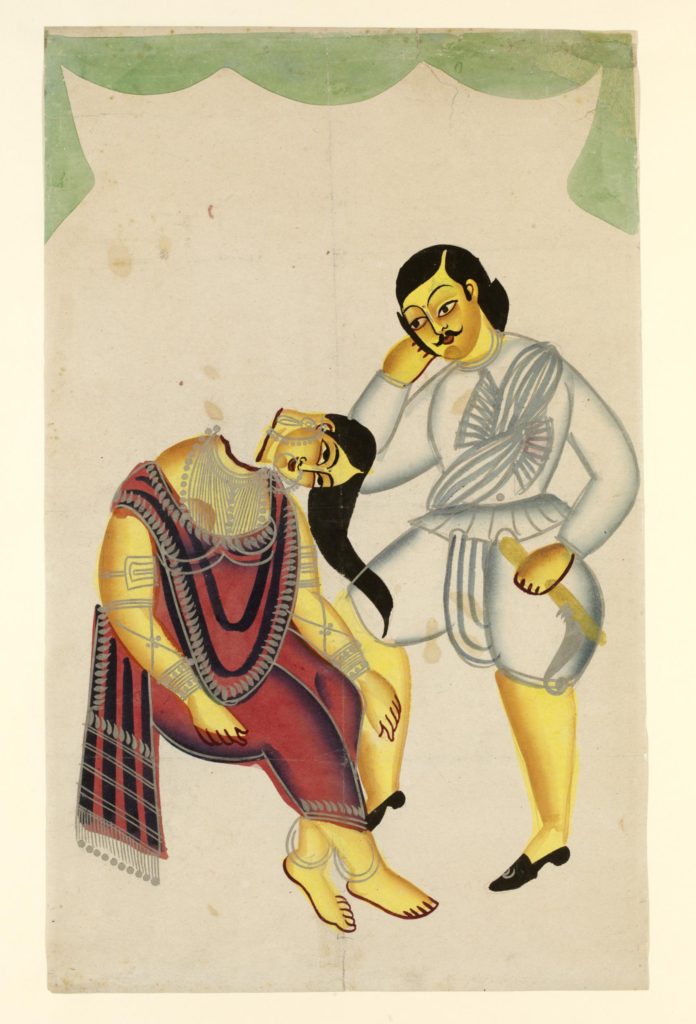 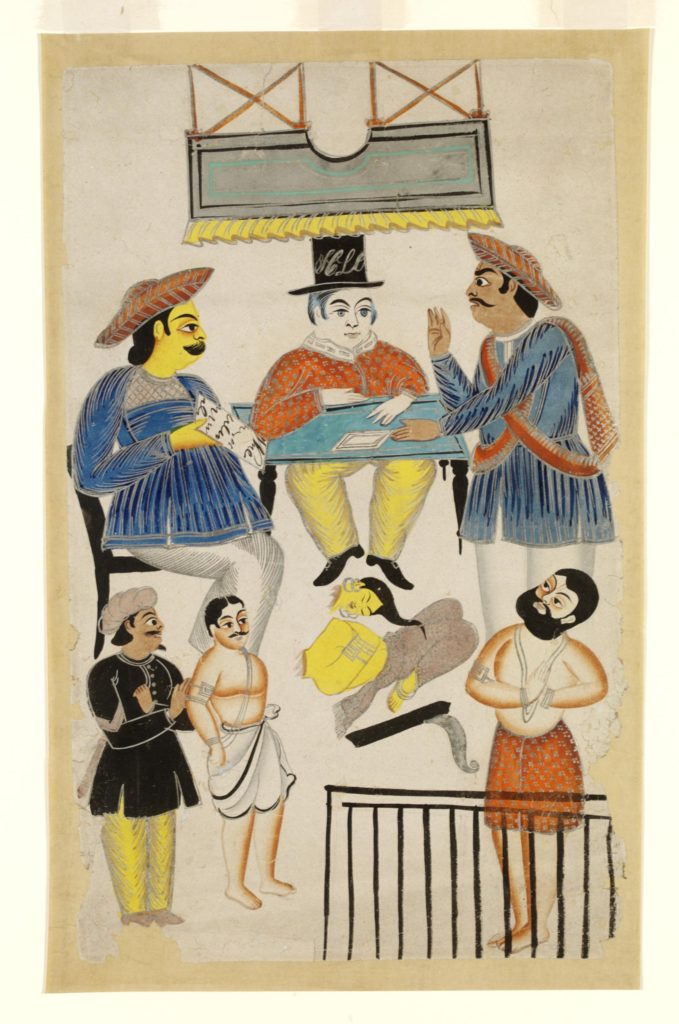 At the court, 1875 © Victoria and Albert Museum, London

We can’t tell you why anybody would want a picture of Elokeshi’s severed head on their wall, but we can say for sure that the world couldn’t get enough of Kalighat paintings. By the late-20th century, various museums around the globe were collecting these works, international exhibitions were being hosted around them and serious academic research was undertaken on the style.

The Last Supper by Jamini Roy, who was greatly influenced by the Kalighat School. Image © Sarmaya Arts Foundation

The Kalighat School of Art, as we know it today, had officially arrived. It had an incredible journey from temple corridors to homes to museums and galleries worldwide. What began as a simple souvenir gave birth to the first-ever truly Indian and truly modern art form. All under the divine shadow of the Goddess of Kalighat.