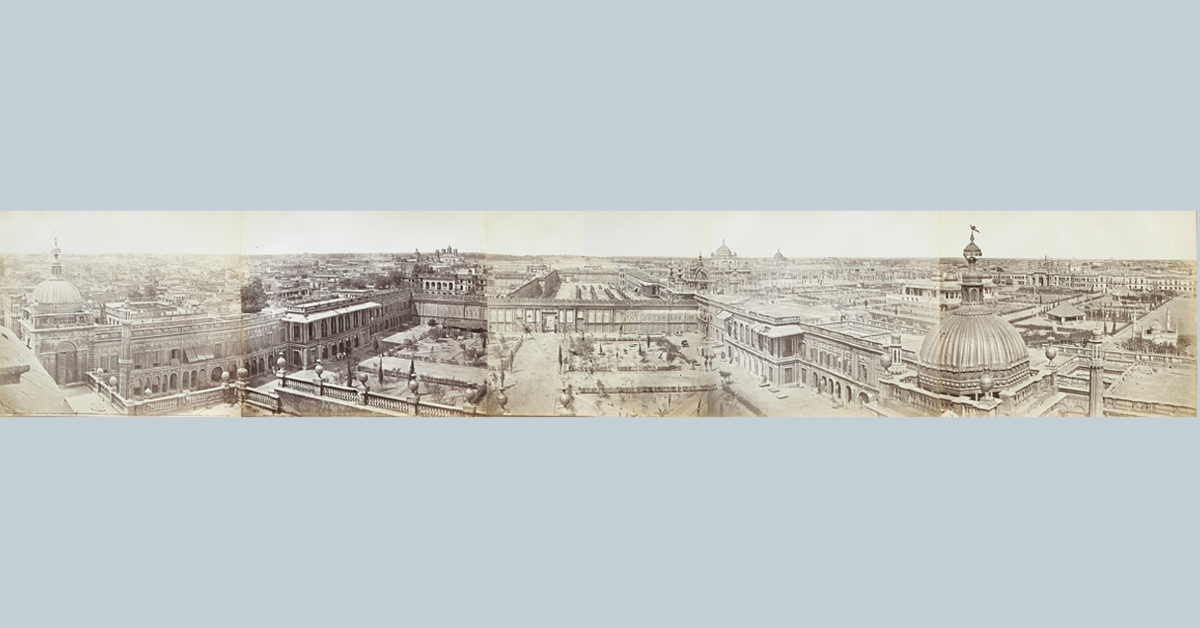 Panorama of Lucknow, The Courtyards of the Qaisarbagh from the Roshan-ud-daula Kothi, a five-part panorama, 1858, Felice Beato © Sarmaya Arts Foundation

There’s a quietness to this panoramic image shot by photographer Felice Beato of the courtyards of the Qaisarbagh from the Roshan-ud-daula Kothi in Lucknow. Taking in the image, you register its architectural landscape but zoom into the centre and you start to see the evidence of destruction in the details — shutters hanging by their hinges, a carriage that appears abandoned, panels of wood lying around and importantly, the near-absence of people.

Felice Beato arrived in Lucknow in March 1858, shortly after the city had been the ravaged battleground to a prolonged siege. Lucknow, one of the main sites of the Indian rebellion of 1857, witnessed a violent battle that eventually resulted in capture by British forces and the ruler Nawab Wajid Ali Shah being forced into exile in Calcutta. Traces of the cannon fire and explosions, looting and devastation that followed were still imprinted on the landscape when Beato reached the city. He was there to document precisely this wreckage. 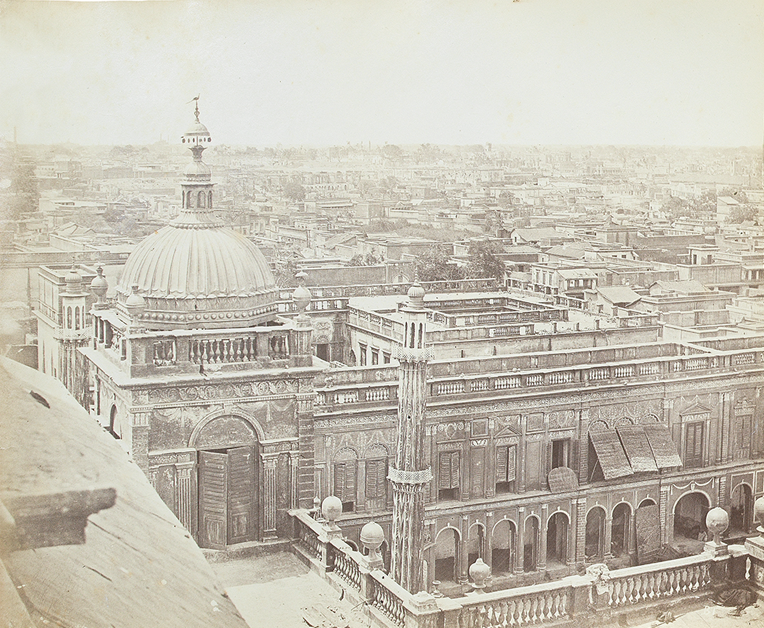 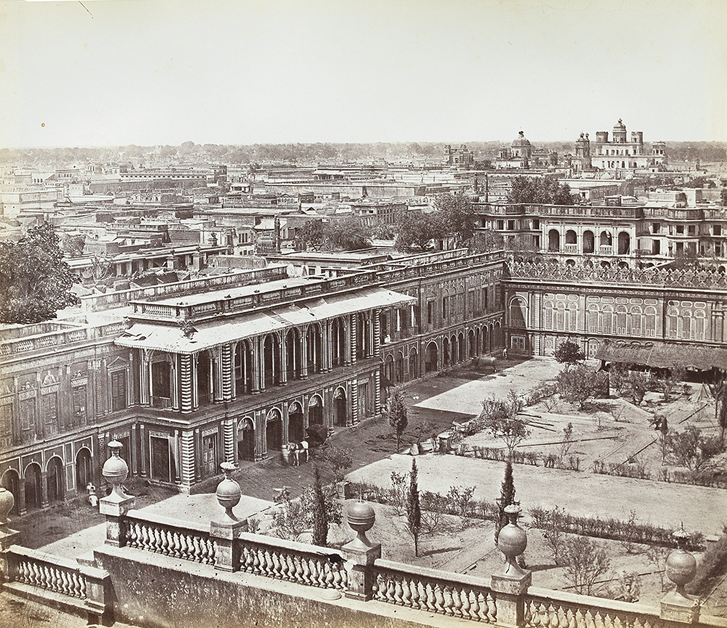 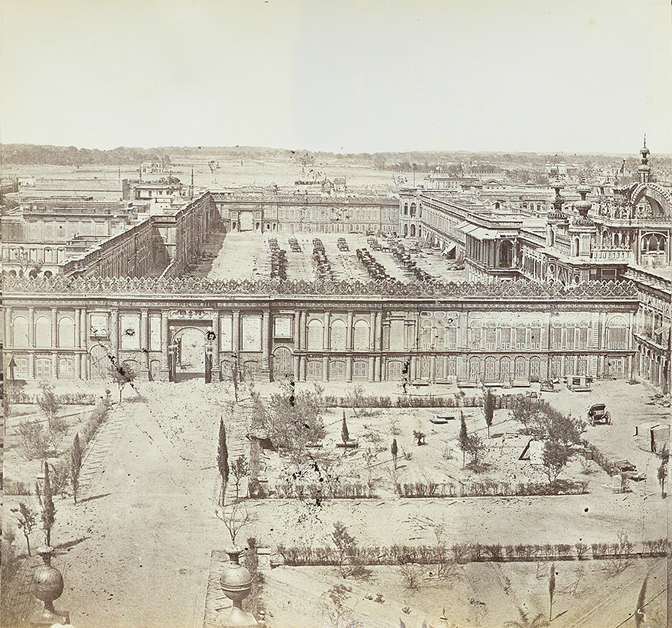 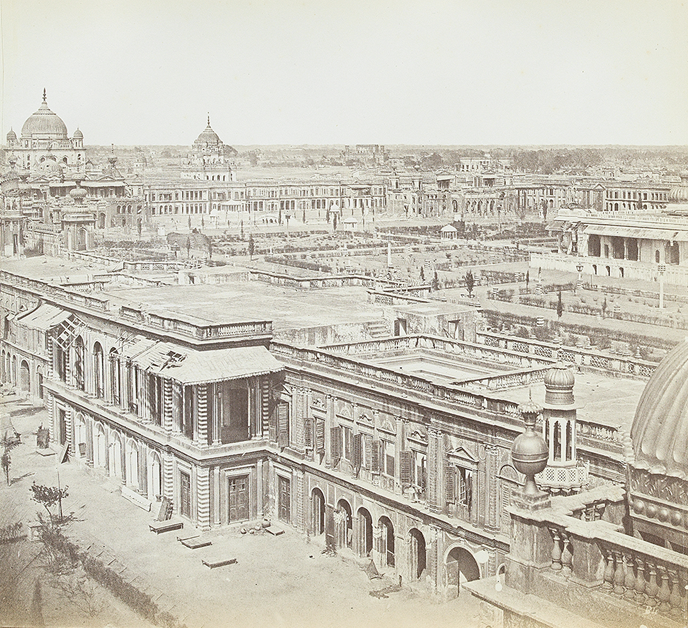 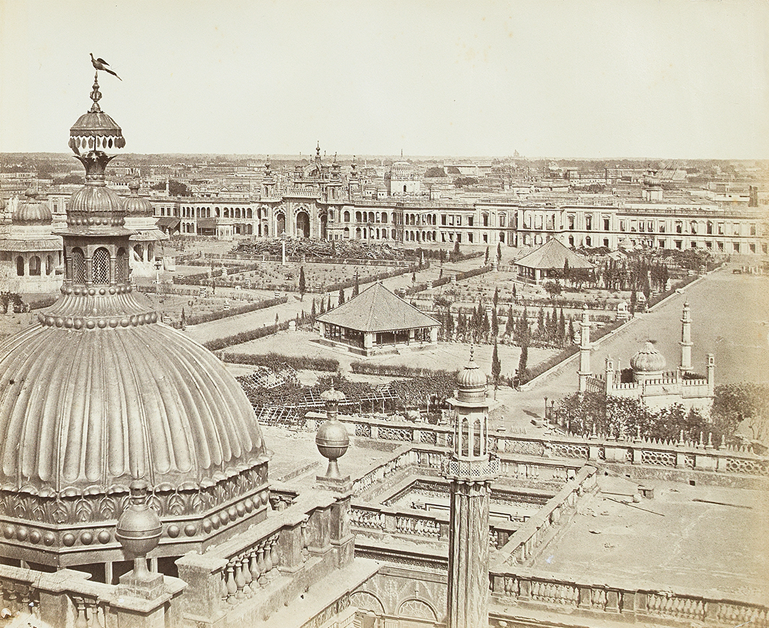 Beato was in Lucknow as a reporter and observer. He was part of unique breed of adventurous European photographers travelling far and wide to document the world for an audience at home. Born in 1832, he was an Italian British photographer who learnt photography from his brother-in-law James Robertson and then partnered with him to document the Crimean war. Though a commercial photographer, Felice is remembered primarily by his war photography, covering the Crimean War, the aftermath of the Indian rebellion of 1857 and the Opium Wars in China, among others. Eager to capitalise on the interest in the 1857 conflict, he arrived in India in February 1858 and  travelled extensively to Delhi, Kanpur, Lucknow, Meerut, Shimla, Agra and Lahore, creating over 130 topographical, panoramic and architectural photos of British military sieges and campaigns. Shaping the significant visual history of the time, he is critical to discussions on photography in the 19th century.

This five-part panoramic image appears to be taken from the roof of Roshan-ud-daula Kothi depicting the Jilau khana in the centre and the courtyards surrounding it. The large dome is a part of the Roshan-ud-daula Kothi. In 1858,  the Qaiser bagh palace had only been recently built, an architectural complex once animated by bazaars, hammams, library, treasury and residential quarters. It was a grand palace for the ruler Nawab Wajid Ali Shah, designed by his architect and court photographer, Ahmad Ali Khan and completed in 1852. Historian and Professor Rudrangshu Mukherjee quotes William Howard Russell, the correspondent of The Times who was at the scene of the loot and plunder of Qaiserbagh as stating, “The scene of plunder was indescribable. The soldiers had broken up several of the store-rooms, and pitched the contents into the court, which was lumbered with cases, with embroidered clothes, gold and silver brocade, silver vessels, arms, banners, drums, shawls, scarfs, musical instruments, mirrors, pictures, books, accounts, medicine bottles, gorgeous standards, shields, spears, and a heap of things… Through these moved the men, wild with excitement, ‘drunk with plunder’. I had often heard the phrase, but never saw the thing itself before.” There are very few accounts of life inside the palace as not too many people were allowed entry during the Nawab’s brief stay there. So in a strange twist, in capturing the eerie silence of the courtyards of Qaisarbagh, Beato’s panorama is a valuable record of the architectural complex. 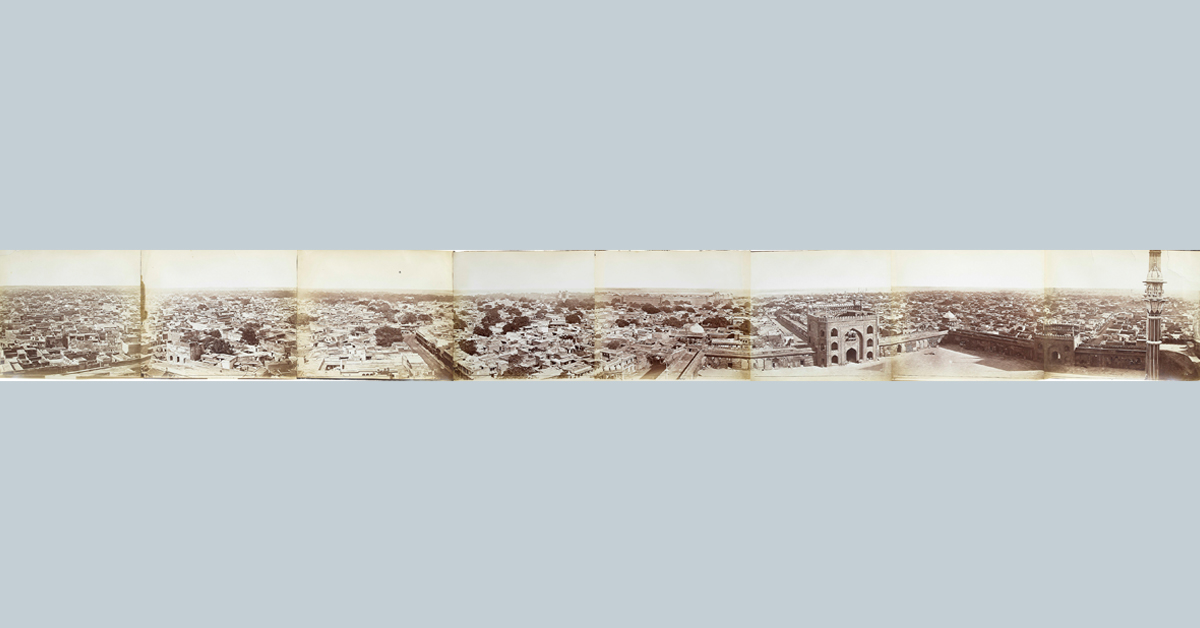 Jim Masselos and Narayani Gupta in their book Beato’s Delhi 1857, 1977 use images of Delhi taken by Beato in 1858 to examine his documentation of the Mutiny. By the time Beato reached Delhi, the British had subdued the rebellion, yet he was the first to photograph the battleground, and the framing technique he used in many of his battlescapes was to keep the image stark and restrained. We see a similar starkness in his composition of another of his panoramic photographs in the Sarmaya collection taken in Delhi. Taken from one of the western minarets of Jama Masjid, the view showcases the changing contours of the city of Delhi after the siege, highlighting the city’s sprawl and architectural landscape. 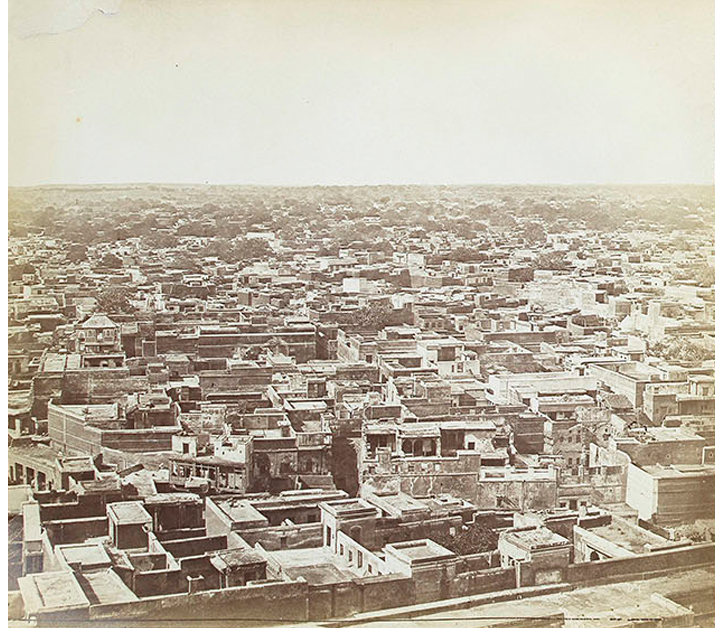 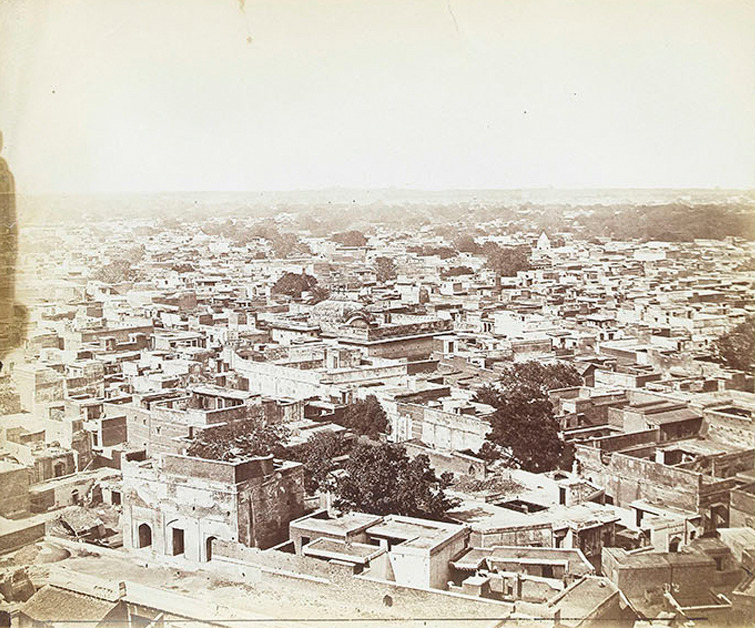 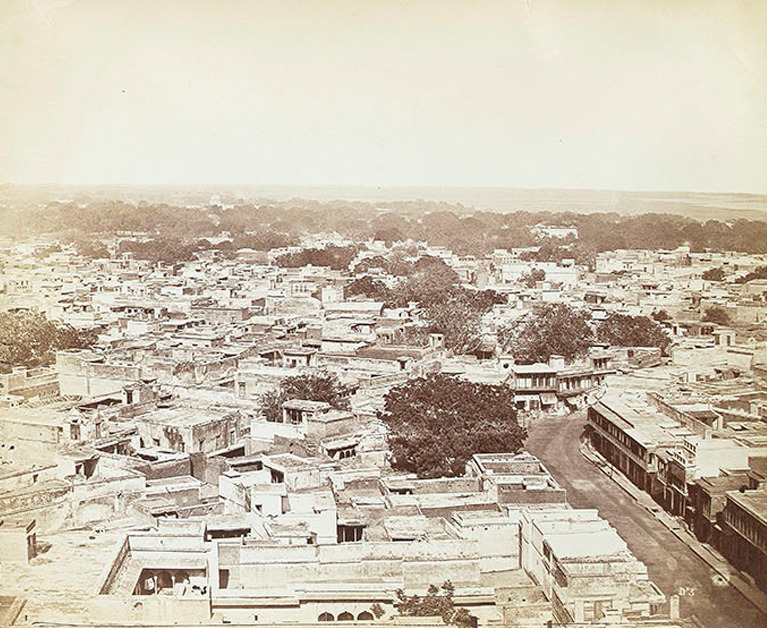 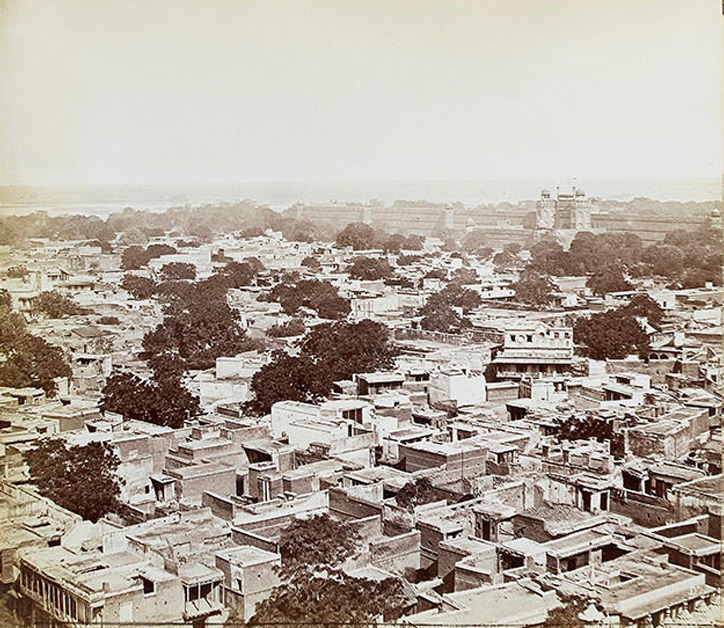 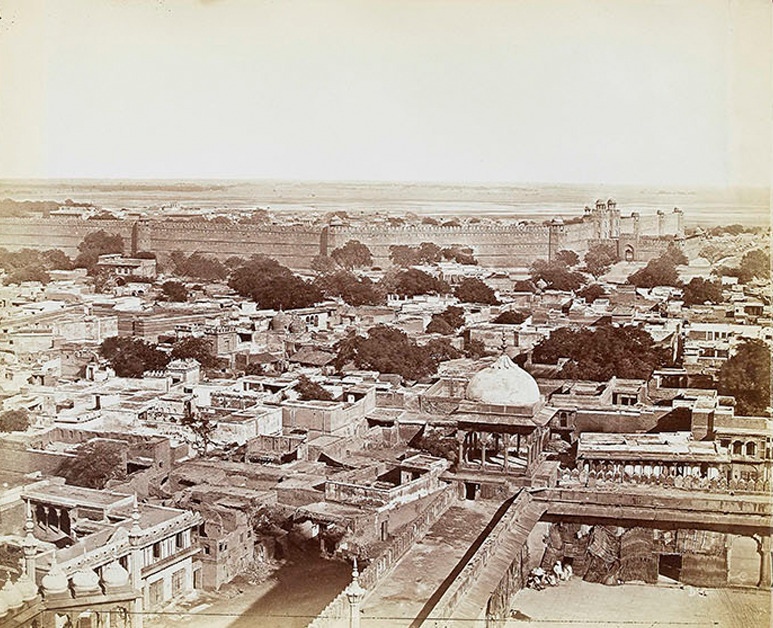 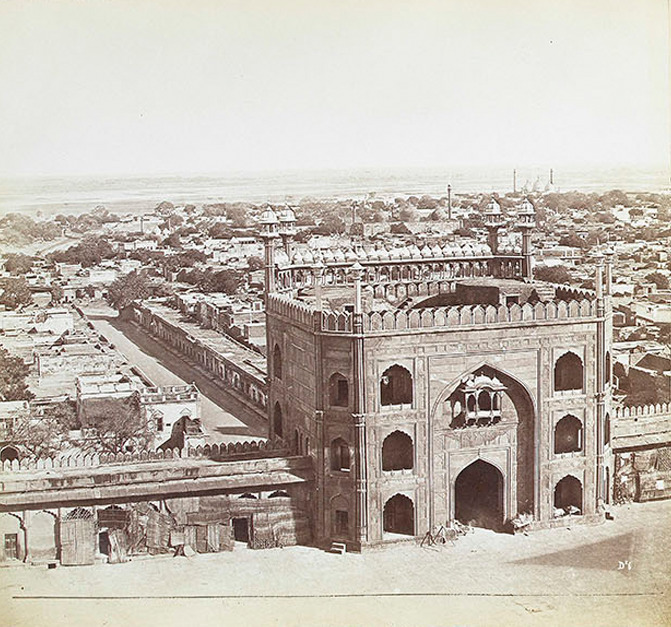 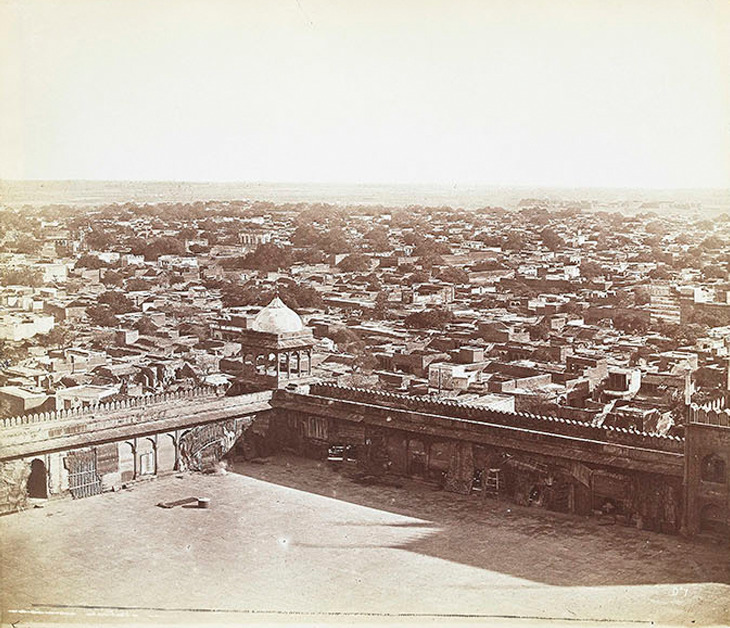 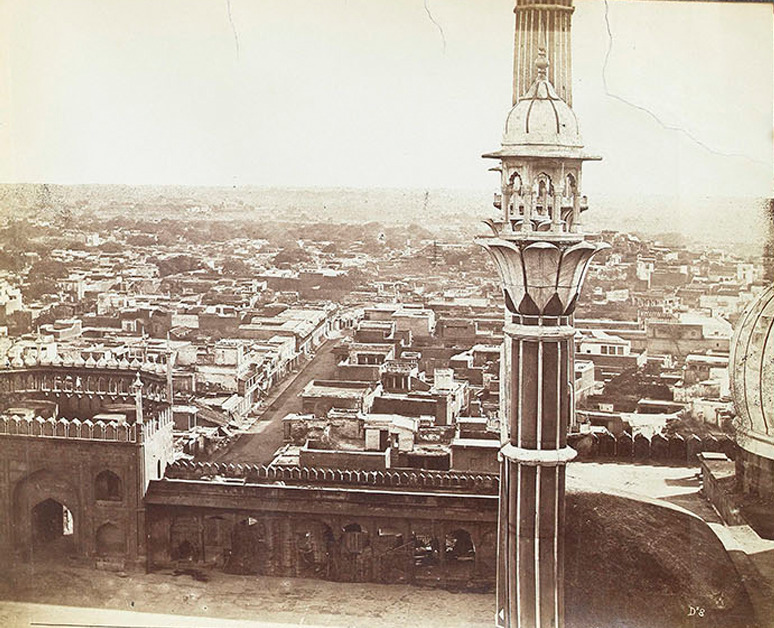 Masselos and Gupta, examining Beato’s series of images, consider his approach Orientalist, reflective in the absence of the local population in his images and in the spotlighting of the battlefield and local architecture, almost memorialising the site. They state, “The restraint in this treatment permits the images to be imbued with a seriousness appropriate for a site on which all the exemplary British virtues of teamwork and sacrifice for the greater good had been demonstrated.” Images like these were made into engravings and circulated in the Illustrated London News to the larger public playing an important role in the myth-making and memorialisation of the suppression of the Indian Rebellion by brave and resilient British forces. This narrative was especially important to reassure any fears that the Empire had lost hold on its position in the Subcontinent.

Yet some of these features of image-making and framing could also be Beato following the conventions of landscape photography at the time. The desire to showcase growing cities, architectural wonders and landscapes led photographers to create panoramas, which were earlier created by placing two or more daguerreotype plates side by side. 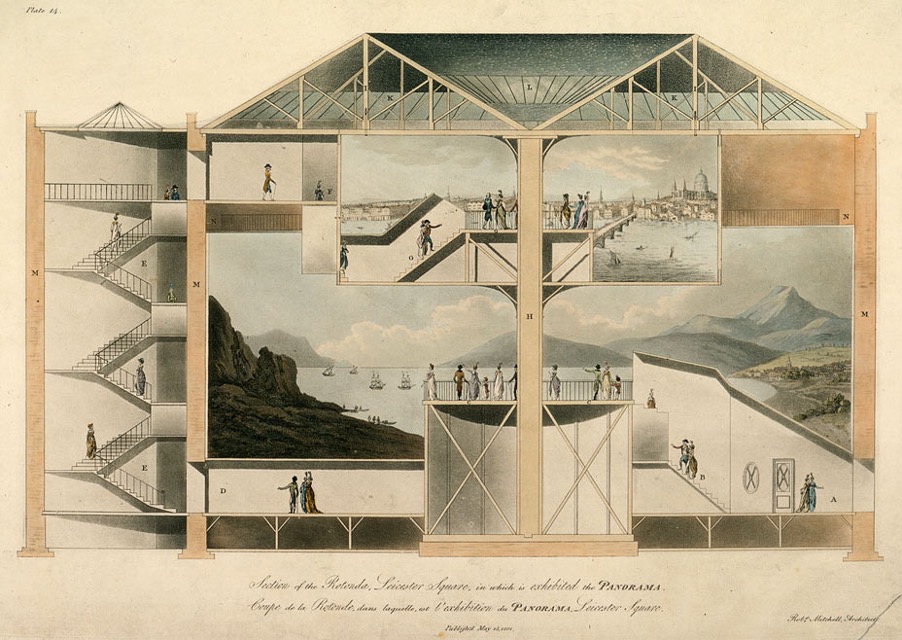 Section of the Rotunda, Leicester Square. This was designed by Robert Mitchell to display the paintings of Robert Barker. Image courtesy: British Library

The panoramic view was interestingly invented by a painter, Robert Barker, in 1787. Barker’s idea was to explore the viewer’s interaction with the image by presenting a 360-degree view of a painted landscape on a circular canvas strip surrounding the viewer. The viewing therefore demanded a specific type of architecture and rotundas (circular buildings or rooms that could sometimes have a dome) were constructed.

Visitors would pay a fee and have to walk through dimly-lit corridors to stand in the centre of a circle on observation platforms and view the large painting that would surround them. The image above is of a cross-section of a rotunda showing Robert Barker’s work. Here, the viewer could take in two panoramas, one bigger and one smaller work. The painting displayed was of the view from the hills around Edinburgh and the viewing platforms created for visitors the perspective and illusion that they were being transported to the ‘same spot’ from which the image must have been created. It was a genius invention to magically transport people into a new landscape, even if momentarily. The spectator was part of the image and at a time when travel was impossible or difficult because of wars, panoramic images brought home cities and contemporary events from a wider world.

This relationship between the viewer and the image translated into panoramic photography as well, encouraging an embodied experience of readjusting one’s way of looking at photographic images, taking in vast landscapes all at once. It was subsequently used to capture landscapes, city views and wars. Felice Beato, poised at the scene of battle, one can infer, used the technique of the panoramic image to capture and translate the visceral emotion of the violence and destruction of war, inviting audiences to become a part of the moment.

Felice Beato, a photographer on the Eastern Road, The Getty, February 15th, 2022