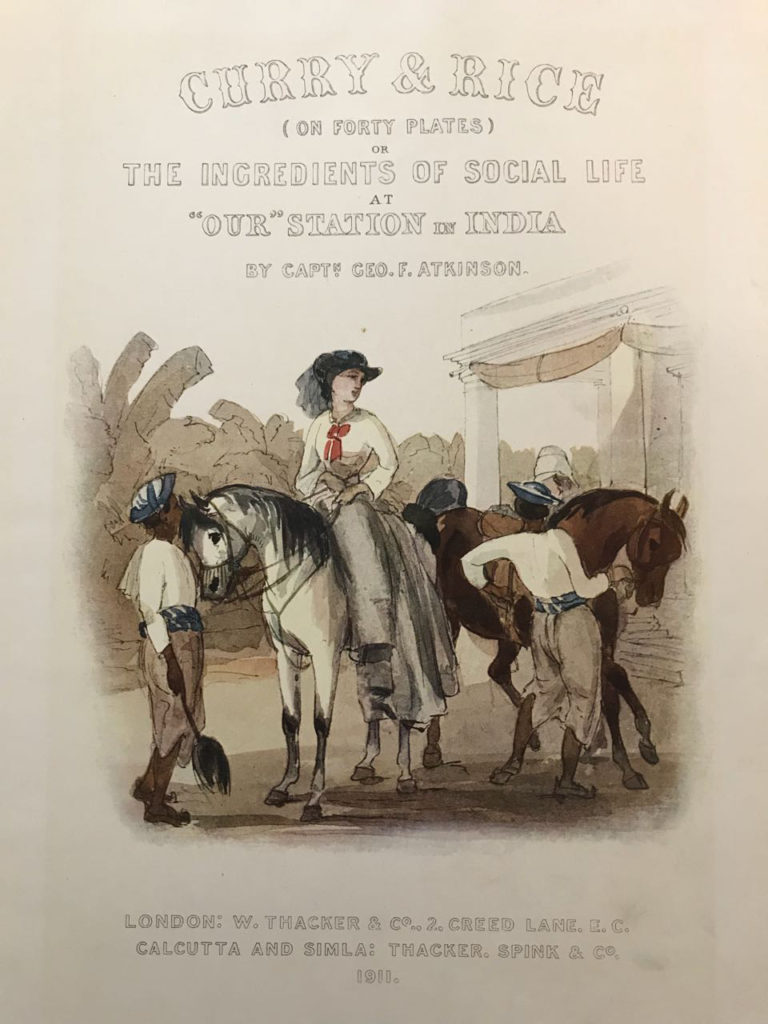 This is a satirical account by a firangi navigating Indian manners, customs and languages and your first clue is in the very first sentence: “Our Station” rejoices in the euphonious appellation of Kabob; it is situated in the plains of Dekchy, in the province of Bobarchy.

Consider it fair warning for the looming wave of puns ahead, both food-related and not. The cast of characters of Curry & Rice: The Ingredients of Social Life at “Our Station” in India include Lord and Lady Coriander, the dentist Dr Nicaldo, the magistrate Maximilian Adolphus Fitznoodle Chutney, Colonel Capsicum of Jehanumabad, Dr Mc Ghee and of course, the ‘Nuwab of Kabob’. The author George F Atkinson was a Captain of the Bengal Engineers, part of the British Indian Army stationed in the Bengal Presidency. His adventures in the countryside clearly inspired this hugely successful book first published in 1860. According to this article in The Guardian, it’s one of the top 10 books about the British in India. And it begins with a poem. 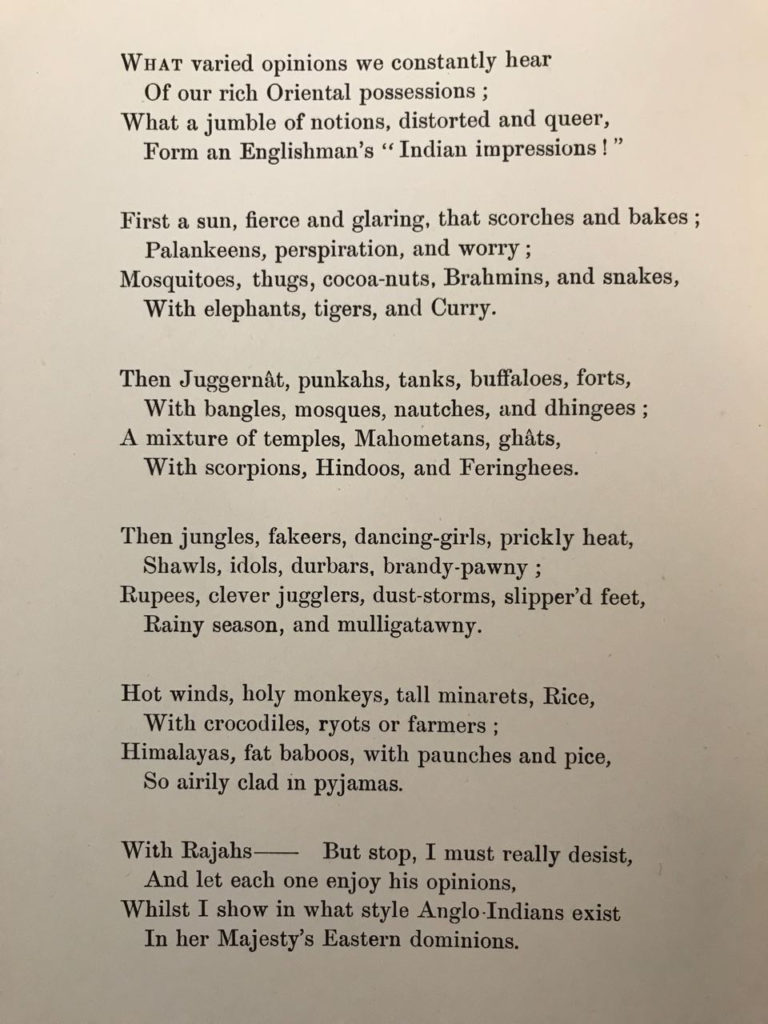 The original print contains ’40 plates’ or coloured lithographs, which accompany each vignette and give this book its charm. There’s something about these sleepy slice-of-life scenes that put you in mind of RK Laxman’s sketches for Malgudi Days. 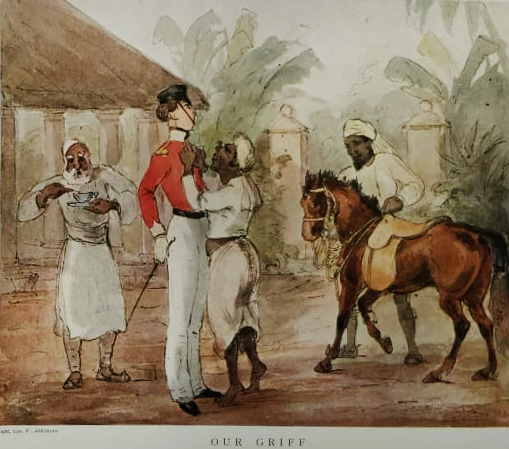 Nearly two centuries after it was published, Curry & Rice’s prose is thoroughly dated, but its art immediately transports you to the centre of this fictional mofussil town and illustrates how British officers and their families amused themselves when they were posted in places like these.

Here are a few characters and everyday scenes from the town of Kabob, exactly as they were introduced back in 1860 by their creator.

Our Judge & His Wife 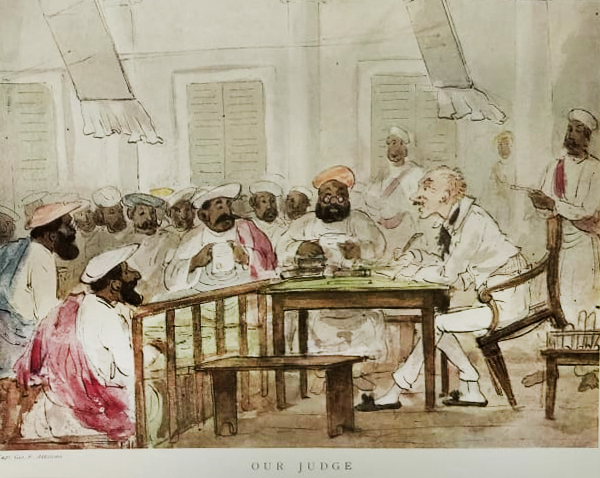 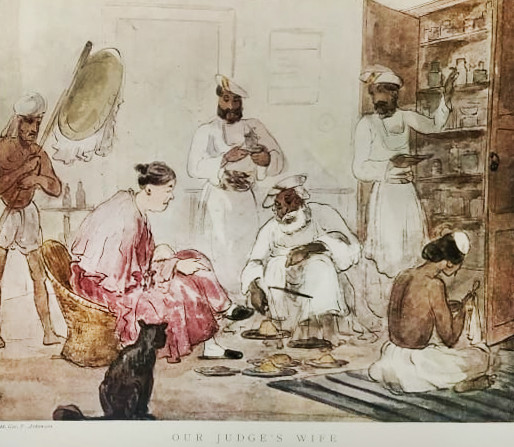 I must introduce you to Turmeric; he is “Our Judge”—a tremendous dignity right at the top of the social tree of “Our Station”

But you really must call upon Mrs Turmeric!—she is the Burra Beebee, the great lady of Kabob and I’m inclined to think she’s not entirely unconscious of the dignity of her state in life; for when Lord Tamarind, on his Eastern travels, passed through Kabob, and handed Mrs Chutney in to dinner, great was the indignation in the Turmeric bosom. 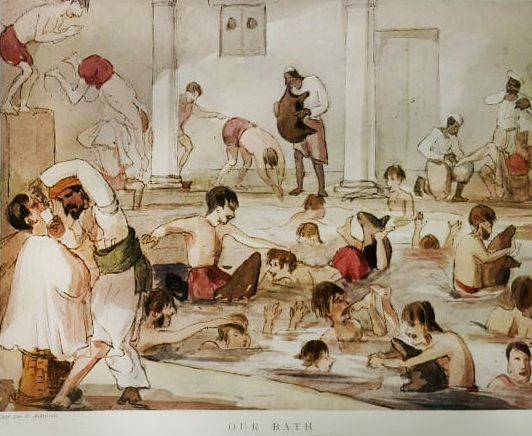 About the barber: Here on the left is Scrape Doss reaping the beard of some hirsute visitor. See with what dexterity he wields the razor; mark how its polished edge is whetted by its rapid application to his bared and honelike arm; observe the velocity with which the snowy lather is laid on, and then more rapidly removed (the patient’s nose acting as a helm, by which the motions of the pliant chin are guided by the skillful excisor).

About the mussock, the inflated hide of a sheep used as a flotation device (seen here in the central background): “It is so detestably buoyant, nothing will induce it to let you mount—no ticklish steed was ever so unmanageable; but you get the better of it, stride across it and skillfully balanced, grip its sides, determined to fall neither to the right hand nor to the left; when the remorseless monster slips away backwards from beneath you and you are plunged headlong into the foaming water.” 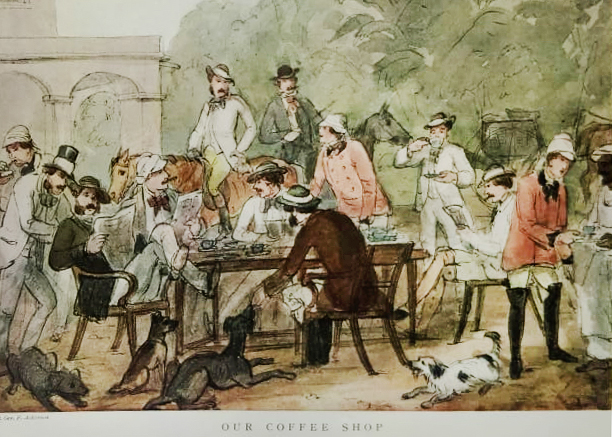 Where the petty peculiarities and idiosyncrasies of the community are divulged and proclaimed with a startling amount of embroidery, and with a distracting deviation from the rigid truth. 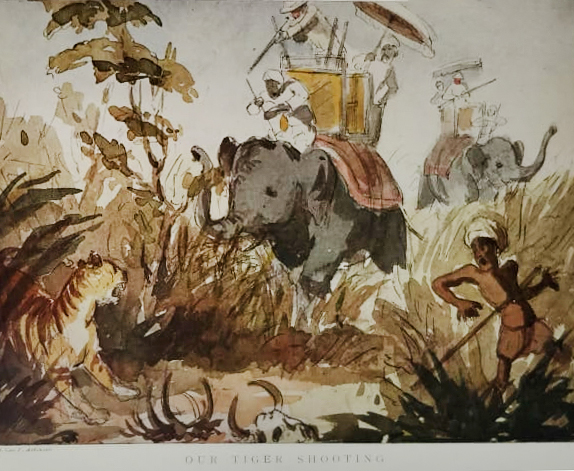 You would like to try your luck at tiger shooting?…Now you may have a chance today of doing the same; for this morning an aggrieved agriculturist came howling into the cantonments reporting the sudden apparition of a tiger, only fifteen miles off, which had abstracted his oxen and his fatlings, and evinced a desire, moreover, to elope with his wife.

Curry & Rice: The Ingredients of Social Life at “Our Station” in India by George F Atkinson is part of Sarmaya’s rare books collection