A painter, photographer, curator, an occasional writer and an avid art collector, Manisha Gera Baswani is one of the most versatile artists in the Indian contemporary art industry today. Born in the New Delhi of 1967 to parents who travelled from Pakistan in the aftermath of the Partition, Gera Baswani recalls a sweet memory of how her journey with art began. “My mother pasted newspaper on the walls up to two feet, till where my hand reached when I was a child. We all have an inkling to scribble on the walls when we are kids, but how many parents enable this behavior? Not many—I didn't do it for my children.” This early freedom to create as she pleased drew out the artist in her.

School played a pivotal role too. Gera Baswani is an alum of the famous Delhi Public School in RK Puram. “I had practicing artists as my teachers and they encouraged me. They wanted me to participate in art competitions including the Shankar's [International Competition, a prestigious yearly scholarship program by the Children’s Book Trust], which was only a few days before my 10th board examinations. My mother never once said no, you can’t [participate] because you have boards in seven days. And so I did, and I won the President’s gold medal. So yes, encouragement at home, and later in primary and middle school is where it all started.”

According to Gera Baswani, all artists reveal a part of themselves in the art they make. “I think everybody encounters a series of breakthrough moments in one’s life. Mostly when they are happening, you don’t realize that they are [breakthroughs]. I remember going to Louise Bourgeois’s retrospective and knowing that I had chanced upon an artist who would transform me. Just like Frieda Kahlo did when I entered college. Interspersed with these, there could be private moments, people you encounter, spaces you occupy, teachers—in my case, it was my guru A Ramachandran.” Ramachandran is a highly regarded modern artist and recipient of country’s third highest civilian honour, the Padma Bhushan.

In a way, this significant relationship with her guru introduced Gera Baswani to a whole new medium of expression: photography. Ramachandran was her teacher in Delhi’s Jamia Millia Islamia university, where she did her Masters in Fine Arts. After graduating in 1991, she started visiting him and they’d have long discussions on art, architecture, philosophy and relationships. To capture these ideas and moments, the young artist started bringing along a dictaphone and a still and movie camera. “As I was photographing him, I started becoming comfortable with the camera. I started taking my camera everywhere and capturing artists inside and outside their studios.” After eight years of work, Gera Baswani showcased a select few photographs at a number of exhibitions, including the Kochi Biennale where she showed twice. 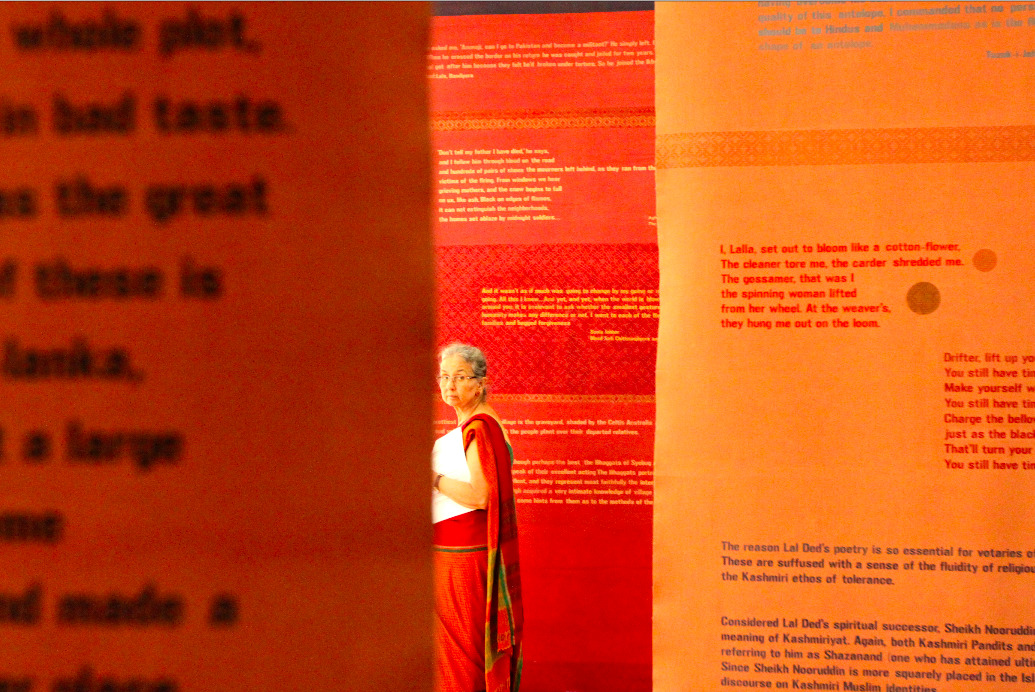 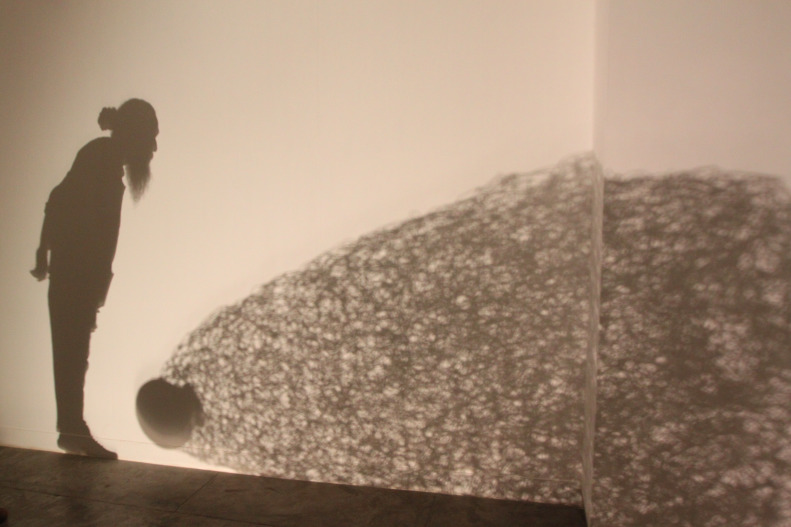 “While I was photographing Indian artists, I started capturing Pakistani artists who came to India to have shows. My parents are from that part of the world: my mother is from Quetta and my father is from Sargodha. My entire childhood, the bedtime stories have been about home, their home. I started nursing the desire to photograph Pakistani artists in their land.” Through the help of friends, Gera Baswani was able to connect with many Pakistani artists and capture them in their home. To collate the stories of both Indians and Pakistanis, she started contacting Indian artists she’s photographed with the intention of finding among them some ancestral connections to Pakistan. “…in days, weeks months, I was flooded with beautiful stories. And I decided to do 47 stories from Indian and Pakistani artists.” 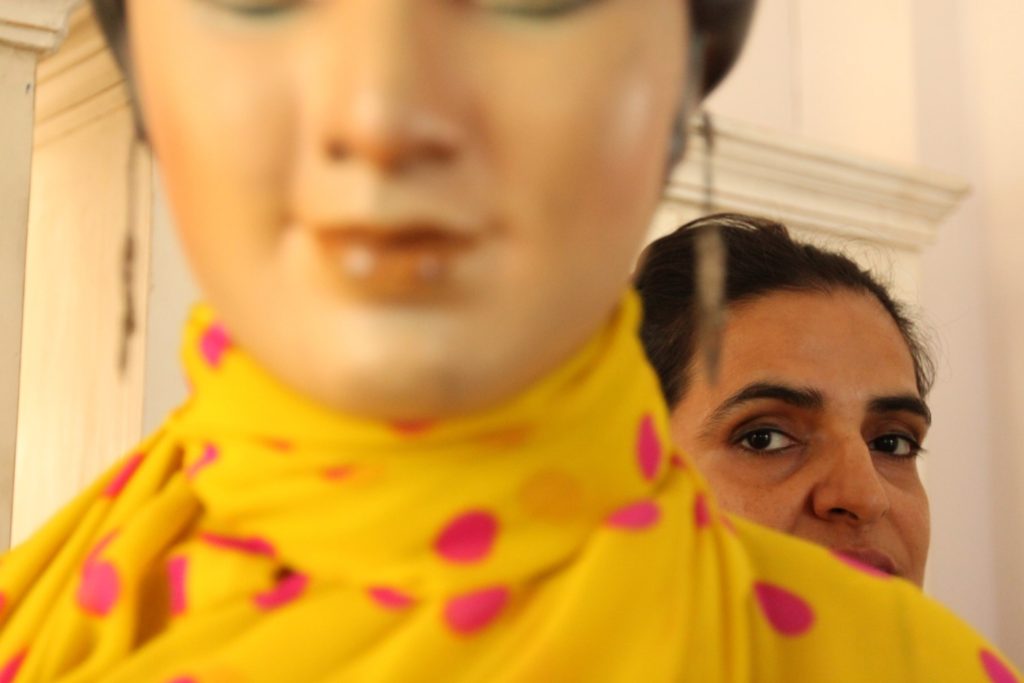 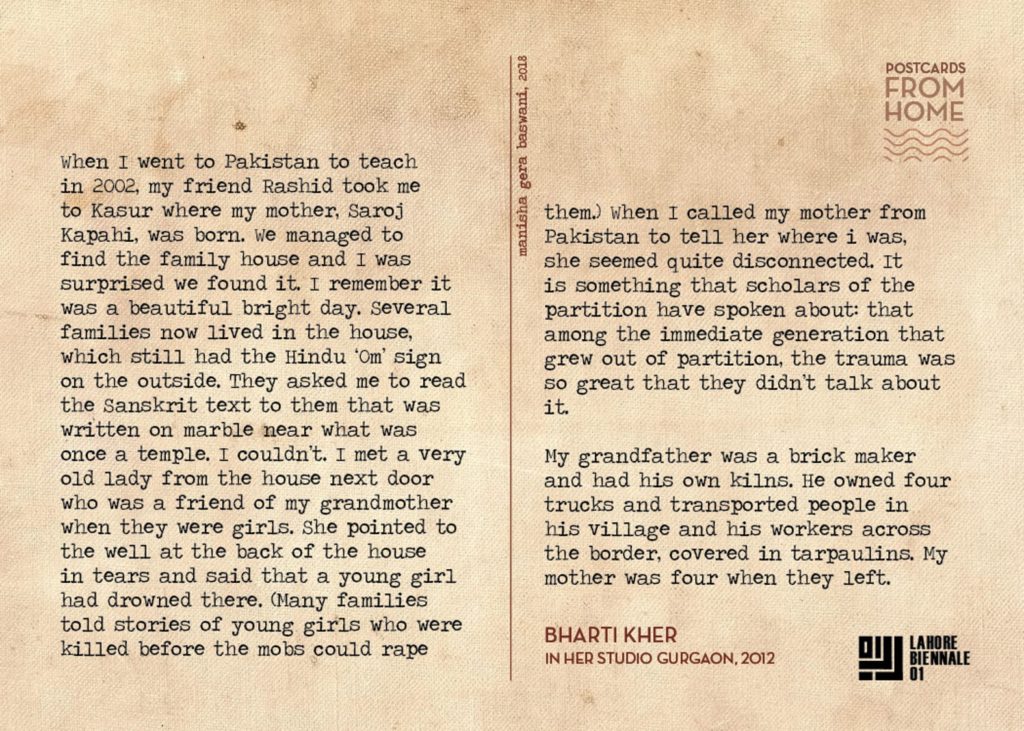 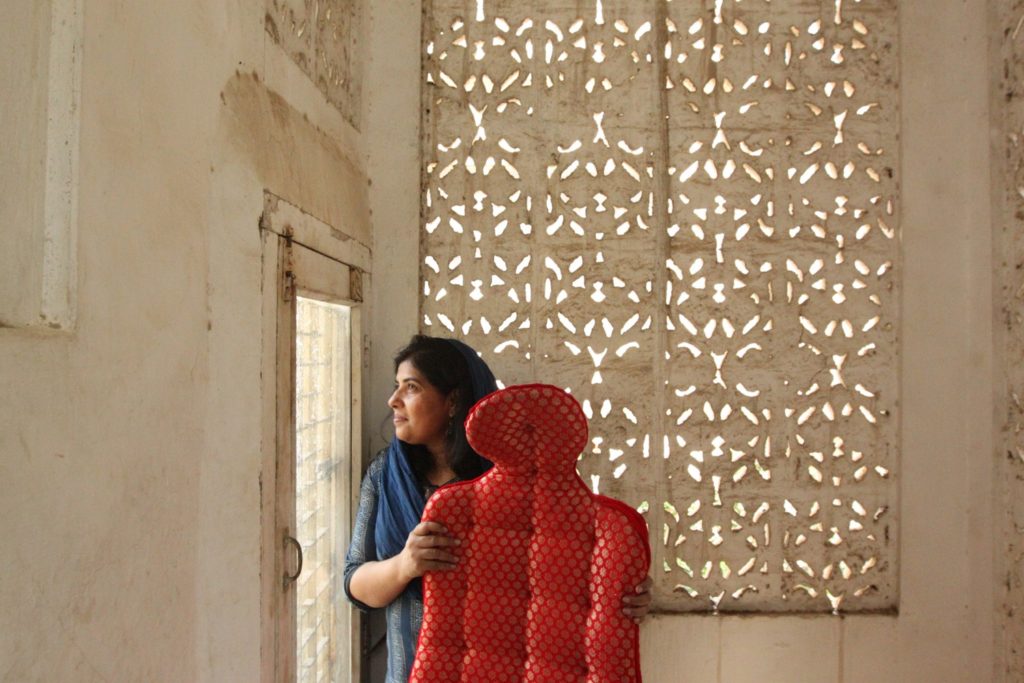 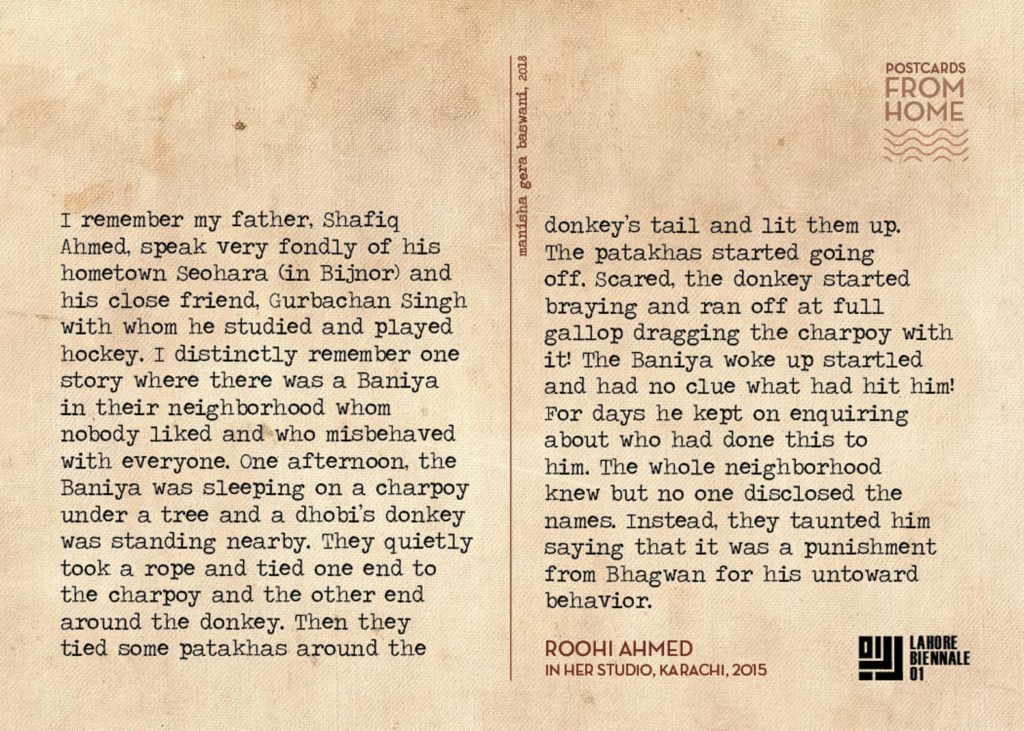 From Postcards From Home by Manisha Gera Baswani

In her paintings, Gera Baswani stays rooted to the land of her birth and its many cultural legacies. A major influence is nature. The three series—Desert Meets The River, Dusk On The Crimson Horizon and The Tree Exhales—use flowing patterns in contrasting colours to evoke the skies, earth and river banks. This isn’t to say Gera Baswani is immune to the pull of everyday pleasures, either. “Mostly one’s encounters of learning are familial, parents, siblings. My brother was into astrology so I did a series of constellations and maps. My sister-in-law is a singer and her pink bedroom is all about Elvis, so I did a series on Elvis Presley. My husband loved the James Bond and Star Wars films, so I did a series on Bond and R2D2. What I’m saying is, subjects end up in my work very often because of the people in my life. So the inspiration for my work moves very freely inside out and outside in.” 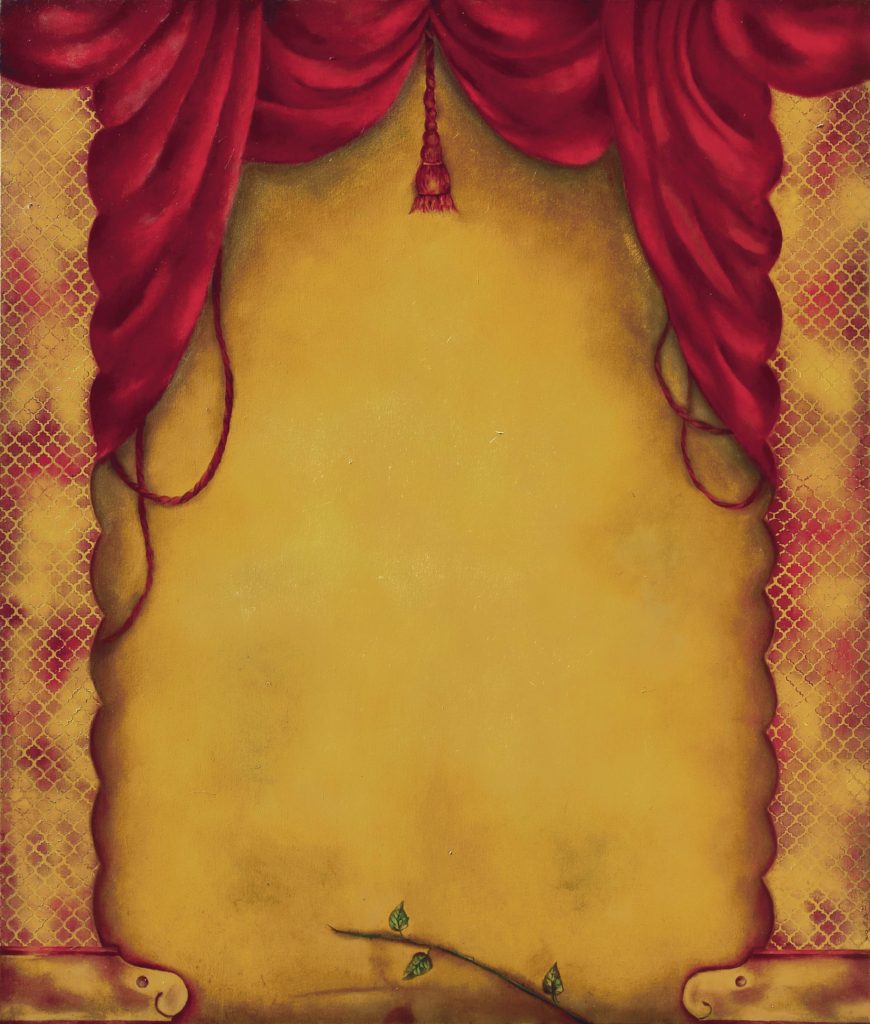 For a number of years Gera Baswani’s work was deeply informed by Persian miniatures. She reinterpreted and reinvented miniature and folk paintings, creating a new visual language by merging it with the contemporary. Her style uses decorative symbols in a free-flowing pattern that she believes is an important element of India’s visual language. A major change took place in 2012. This is when the artist started accommodating more white space in her canvases. Passionate reds also become prominent in these works. “In the last few years my work has taken what one would call an austere turn. My husband went through a major surgery and my own health issues led me to use a lot of white in my paintings. These events in my life made me rethink and re-evaluate. The realisation of  everything being so precious and fragile. I used acupuncture needles and threads; I did not want to over-decorate the white background.” 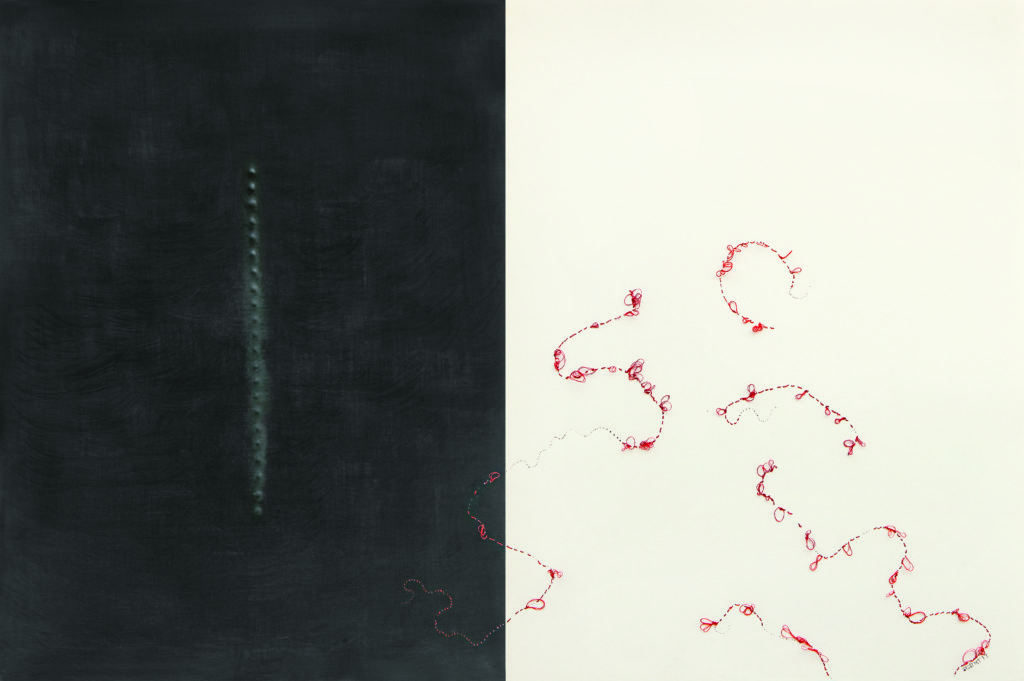 In 2017, Gera Baswani conceptualised a six-painting series, titled Luminously between Eternities. Two of these paintings namely, Grishma and Aandhi, are part of the Sarmaya collection. She describes this as a body of work that represents childhood memories. Fruits and flowers hang heavy from boughs with the fragrance of nostalgia and leave their imprint forever on the children who play under the trees. The paintings use watercolours and gouache on a shikishi board. 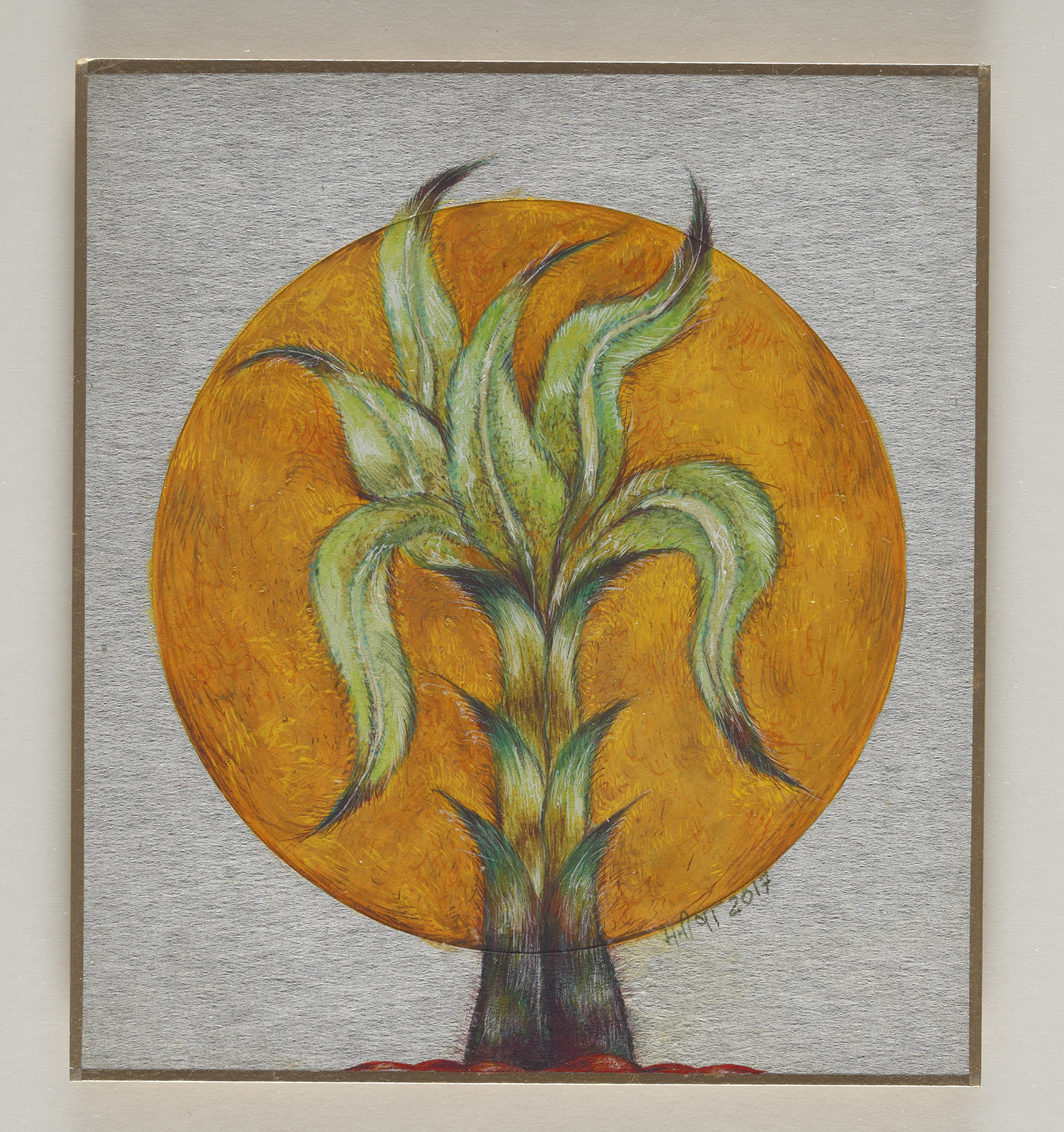 Grishma is a truncation of the Sanskrit word for summer, Grishmarutu. The painting features a bright yellow sun and a lush green palm standing undefeated by the heat and light of the sun. The contrast of the yellow halo and the red soil beneath the palm complements this nostalgic yet meditative feeling. Aandhi is reminiscent of the swaying of the trees just before rain showers. The tree shivers with every light breeze and is lit up by a copper halo, hinting at the storm to follow. Gera Baswani emphasises that these works don’t require deep analysis; they tell a simple, innocent story. 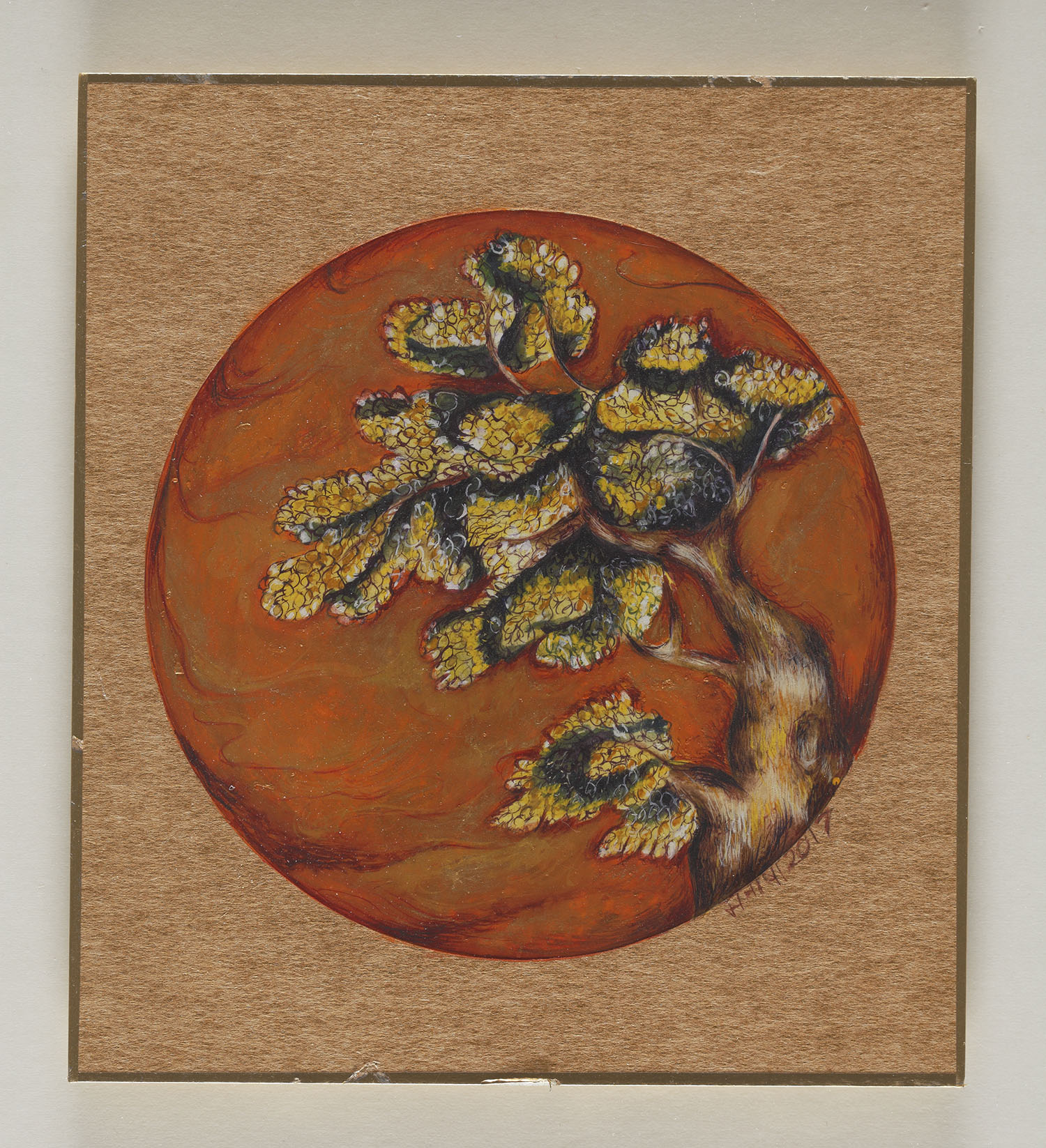