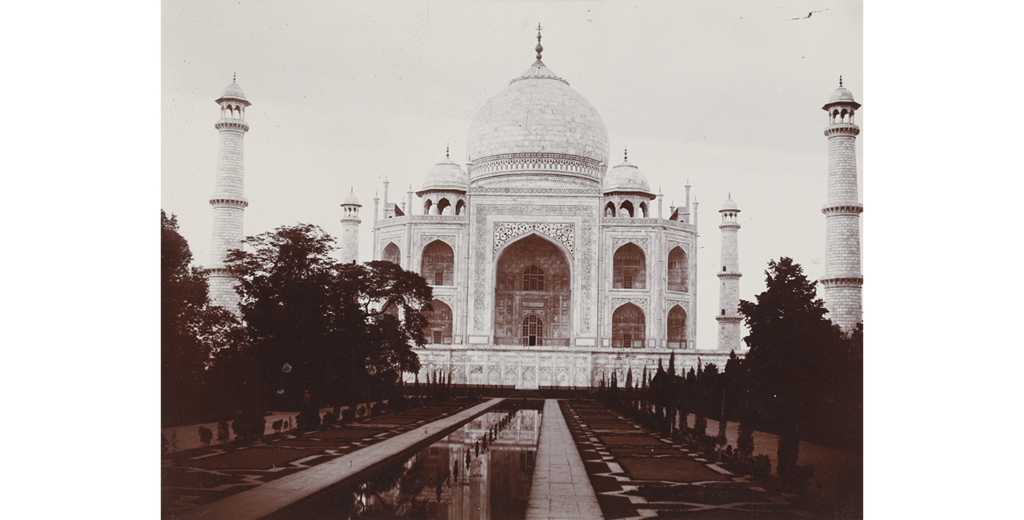 A statement released recently by our minister for culture and tourism reveals India’s highest revenue-generating monuments. Leading the pack, much to nobody’s surprise, is the Taj Mahal. If there’s one instantly recognisable form in which history, romance and art collide to create a muse for the ages, this is it. Out of all the stories told about the Taj Mahal, the most enduring one is the love story of the tragic Arjumand Banu Begum. You probably know her as Mumtaz Mahal.

The chief consort of the fifth Mughal emperor Shah Jahan, Arjumand died giving birth to her 14th child. A marble mausoleum was constructed to house her mortal remains on the south bank of the Yamuna. It was named the Rauza-i-Munawarah aka the Taj Mahal and took fifteen years from 1632 to be completed. Marble from Makrana, jasper from Punjab and jade from China were transported to Agra to be used in the building. The complex includes the mausoleum by the river, framed by a mosque and a guest house on opposite sides, and fronted by an elaborate Persianate garden. 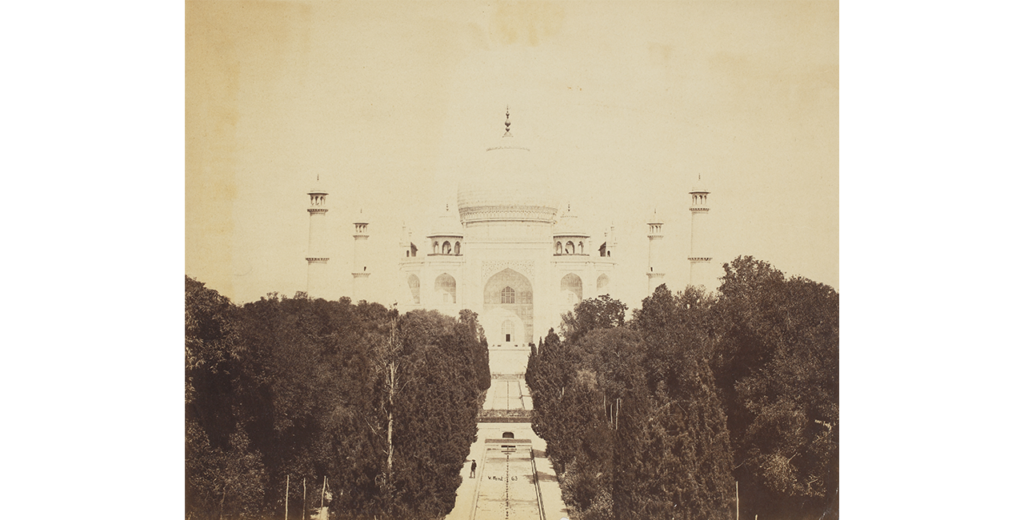 A cloth map of Agra dated to 1720s, now held by the Maharaja Sawai Man Singh II Museum, Jaipur, depicts the Yamuna riverfront lined with tombs, gardens, pavilions and the massive Agra Fort. It would be safe to assume that this is the part of the city where the royals flaunted their wealth through elaborate construction projects. It is here that the who’s who of Mughal Agra society socialised, partied and watched the world go by from their ornate pavilions and lush gardens.

Despite its location in the heart of prime Mughal-era real estate and even though it’s surrounded by structures of equal beauty, the Taj set popular imagination on fire. Romanticised local lore about the untimely death of a royal beauty coupled with the undeniable dreamlike appeal of all that white marble to turn this mausoleum into a lasting symbol of love and longing.

Accounts from court chronicles, European travelogues and modern literature further fed this romantic notion. Amin Qawazi and Abd-al Hamid Lahawri, the official hagiographers of Shah Jahan, described his grief at the queen’s death in elaborate rhetoric (as was the norm)—it was said that the king’s hair turned grey overnight and he lost all interest in matters of court and cultural life. Such highly exaggerated 17th-century court literature formed the basis for guide-books by the 19th century, and by the early 20th century, Rabindranath Tagore was calling the Taj Mahal “a teardrop on the cheek of time”.

However, seeing the monument and its history through this singular, somewhat superficial, lens is extremely restrictive and often misleading. Recent scholarship has questioned such claims and advanced alternate interpretations. Today, a more critical and informed approach allows us to understand the monument in its correct historical context.

Theory #1: The Taj would have been built even without Mumtaz Mahal 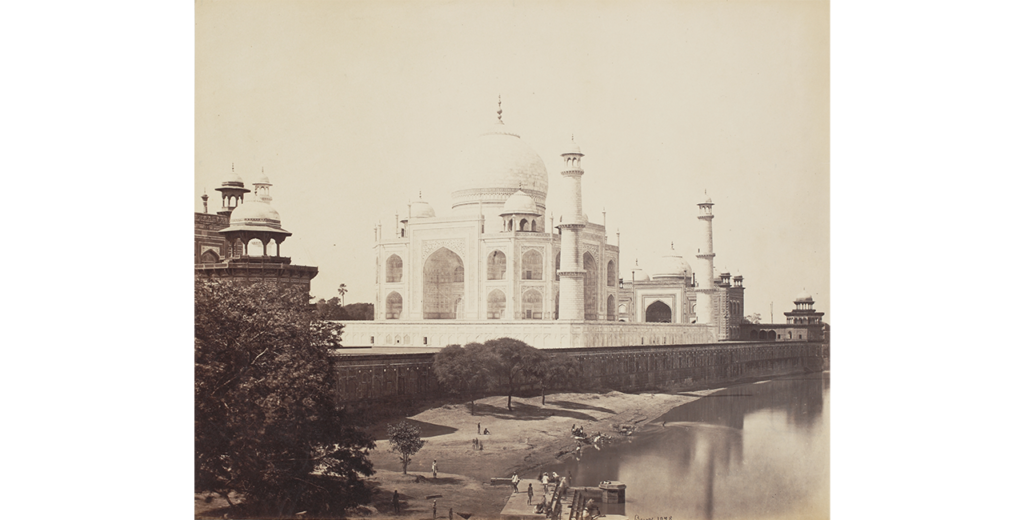 There is no doubt that Shah Jahan shared a special bond with Mumtaz Mahal. She was his wife for almost nineteen years, accompanied him to battle grounds, and was the mother of all his surviving male heirs. It would make complete sense to say that the king was devastated at her death, and decided to build a mausoleum for her like no other. But was that the only purpose behind commissioning the Taj? We must not forget that Shah Jahan is also buried in the same mausoleum, and there is no contemporary evidence to prove that he ever envisioned a separate tomb for himself.

Ah, but the romantics might counter, clearly Shah Jahan couldn’t bear to be parted from his beloved even in death. Maybe. But here’s another, admittedly more plausible, theory: Like all the rulers before him, Shah Jahan was bound by tradition to demonstrate his imperial might to the world. It is possible that the death of Mumtaz Mahal allowed him a chance to do just that.

The Taj Mahal was the first great architectural project for Shah Jahan, who built a series of monuments during his long reign. In the Badshahnama, his official biographer Abd al-Hamid Lahawri writes:

“They laid the plan for a magnificent building and a dome of high foundation which for its loftiness will until the Day of Resurrection remain a memorial to the sky-reaching ambition of His Majesty, the Sahib Qiran-Thani, and its strength will represent the firmness of the intentions of its builders.” ¹

It seems unlikely that a project with such lofty political and propagandic intentions was carried out only to respect the wishes of a dying wife. The Taj Mahal was built with its chief patron’s posterity in mind. We, the teeming, selfie-taking, ticket-buying visitors to the monument are all part of Shah Jahan’s magnanimous concept!²

Theory #2: It would get the Emperor into heaven—one way or another 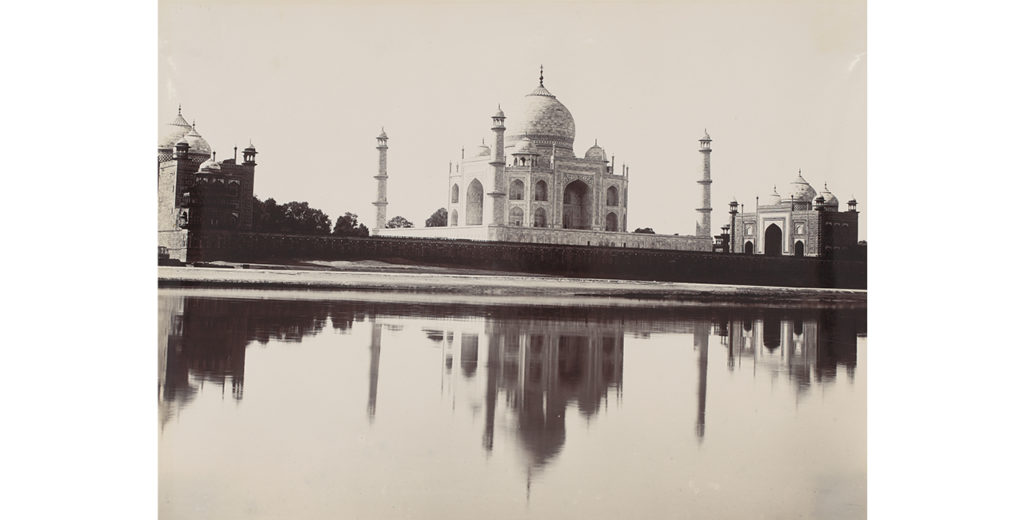 ‘The Taj as seen from river Jumna’, unidentified photographer

In Islamic philosophy, heaven is described as a garden with blooming trees and flowering vines that surround four channels of wine, water, milk and honey – all flowing towards the wish-fulfilling well in the centre. In the Taj Mahal, the char-bagh fronting the tomb proper carefully follows this description. Four channels of water intersect at the centre where a tank is created. Tellingly, the documented name of this tank at the Taj Mahal is al-Hawd al-Kawthar, which translates to ‘tank of abundance and river of paradise’. It’s the phrase used to describe its heavenly counterpart too.

Floral imagery plays a very crucial role in supporting the theory of Taj-as-paradise. The Taj Mahal is heavily adorned with various floral motifs created through the techniques of pietra dura (parchin kari) and low carving (munabbat kari). The presence of these ever-blooming, otherworldly flowers in the overall iconography of the mausoleum hints at the association of the complex to the Quranic image of Paradise.

Theory #3: Its significance is religious, not romantic 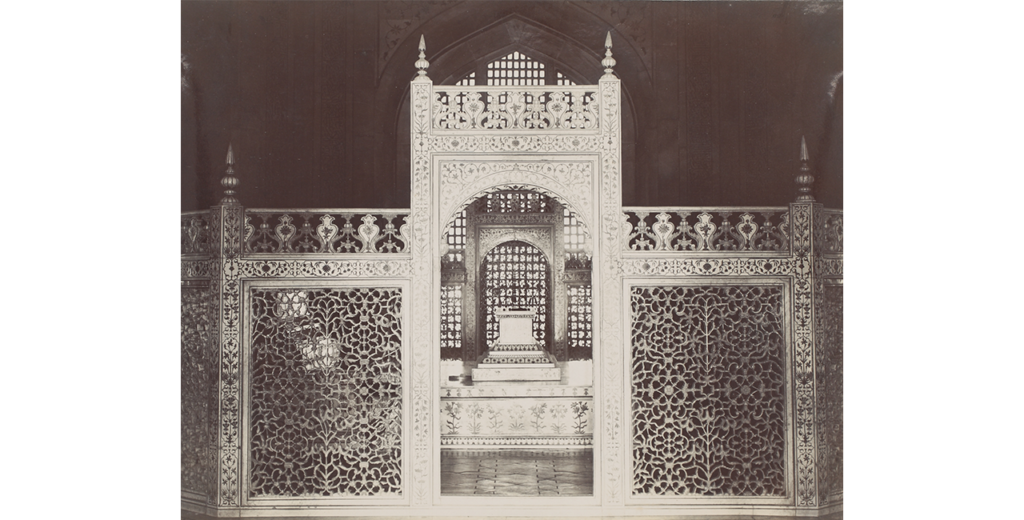 Throughout his thirty-year-long reign, Shah Jahan projected himself as a perfect ruler approaching the divine. As is very evident through the paintings and architectural projects he commissioned, the king was fully cognizant of the value of the visual to achieve that end. From the layout of the garden to the carefully selected Quranic verses that adorn the marble, elements all over the Taj Mahal hint at its patron’s spiritual nature.

Amanat Khan, the chief calligrapher of the project, inlaid jasper into white marble to cover the Taj Mahal with rows upon rows of verses in the ‘thuluth’ script. There are twenty-two passages, quoting fourteen chapters from the Quran, all of which relate to paradise and the day of judgement. The inscription at the main entry invites the faithful to enter paradise, the home of the faithful and reward for the righteous. It has also been hypothesised that regular chantings were arranged in the tomb chamber, akin to gatherings in a dargah, as if to suggest that the departed were now divine.³

Ultimately, the Taj Mahal represents many things: unshakeable faith, soaring ambition (both earthly and celestial) and prodigious skill. And yet. Even knowing everything you know, when you sit on that cool marble floor watching the sun set in the Yamuna, your mind is drawn inevitably back to the love story. A beautiful queen, a heartbroken king and the paradise they built together.