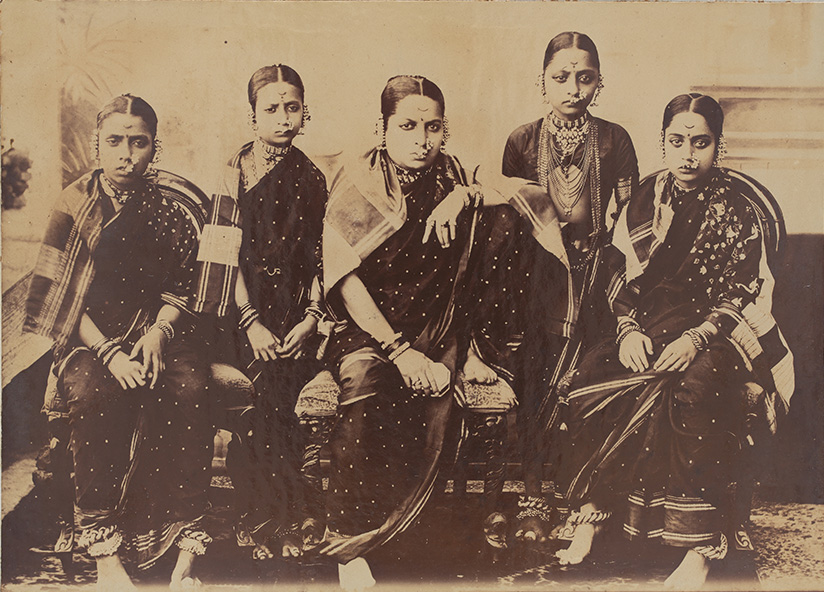 The one constant through centuries of changing cultures and civilizations, a signifier of identity and belonging, a bastion of tradition, a notable symbol of flexibility, permanence and timelessness of the way of life in the Indian subcontinent. The sari is so much more than a rectangular piece of fabric. 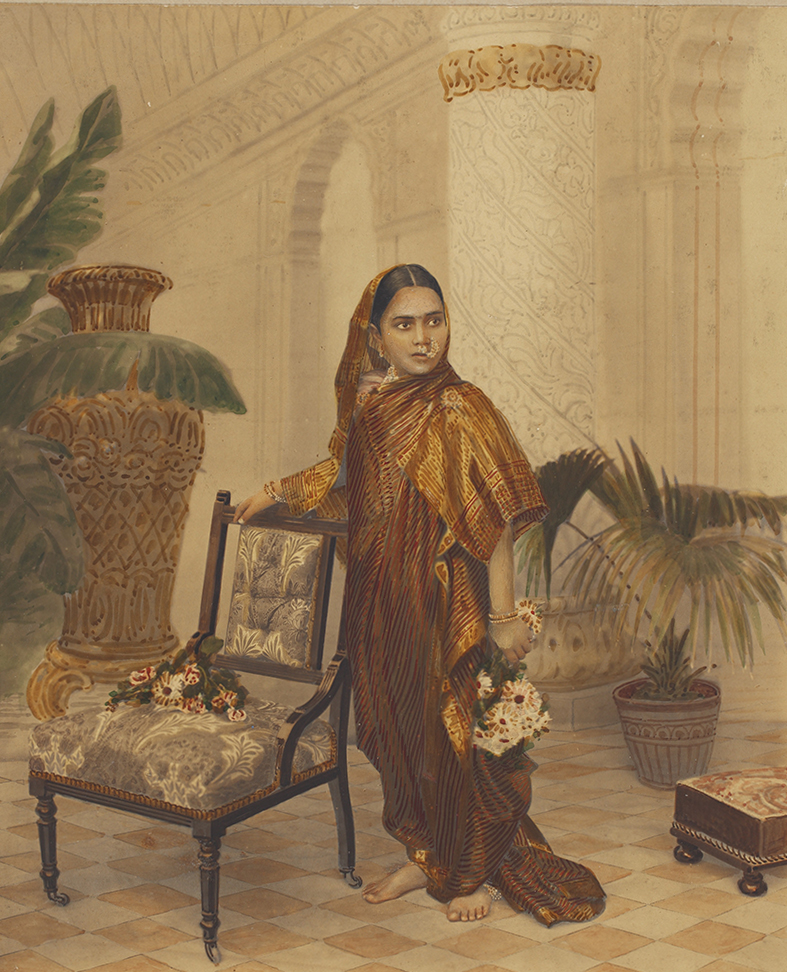 The word sari is believed to come from the Sanskrit word ‘sati’, which means a strip of cloth, and the garment itself can be traced back to the Indus Valley civilization (2800-1800 BC), from the North-west of the Indian Subcontinent. Indication of the existence of textiles and dresses during the Harappan civilization is sparse, but not absent. There is, for example, evidence of an actual piece of cotton cloth draped like a shawl, as an upper garment, but it’s difficult to give it a name. The sari as a lower garment, worn with a stanapatta or breast-band for covering the chest, formed the basic ensemble for women at that time.

The upper garment, known as the uttariya, was simply worn by fastening the breast-band in a knot at the back; the lower garment, or the antariya, was worn in a way that covered both legs, or alternatively, with one end passing between the legs to provide maximum comfort and ease of movement. This style of wearing a sari, in the ‘kachcha’ manner, is still prevalent today in large areas of India. The antariya is redolent of the descriptions of the nivi drape (more on this later) in Vedic literature. Bharavi, a poet prominent in the 6th century CE, refers to it while describing the seductive movements of Gandharva ladies, “With its gathers or knot at the navel coming loose through the knot giving way and being held partially and precariously in its place by the girdle at the waist.” 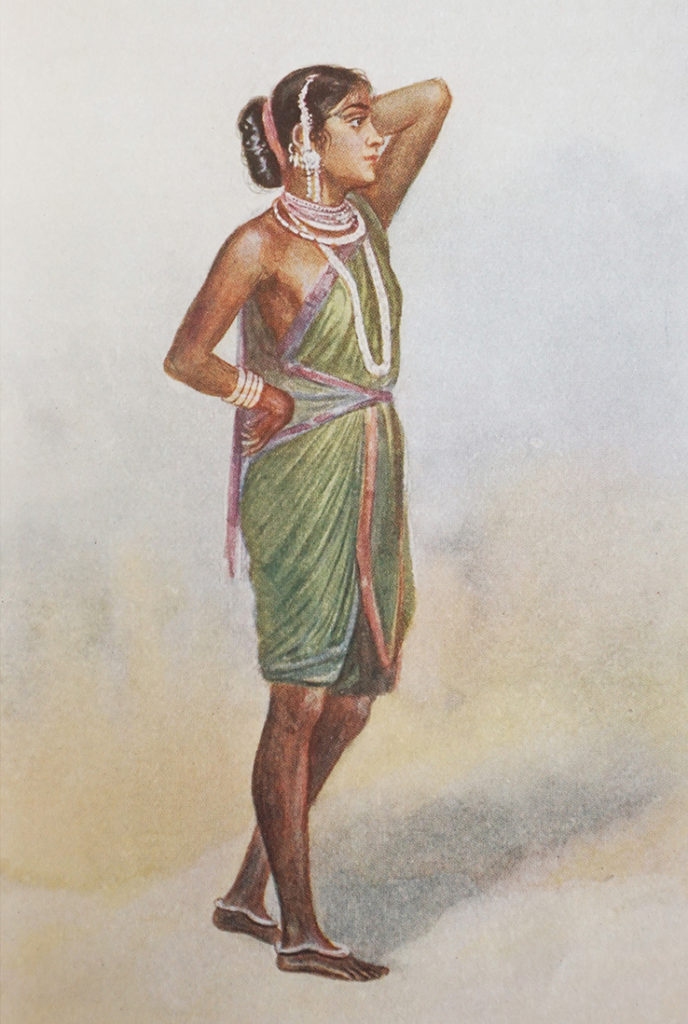 The sari as we know it today exists in a multitude of forms: Mysore silks, Banarsis, Kanjivarams, Paithanis, Pochampallis, Patolas, Tanchois, Tangails, Jamawars, Balucharis, and so many more. The popular way of wearing the sari today, with a choli and petticoat, is believed to have been introduced variously with the rule of the Mughals as well as the British. For many years Hindus believed that piercing a cloth with needle was an impure act, and hence refrained from wearing stitched garments. With the coming of Muslim rulers, the ghagra or petticoat was invented. 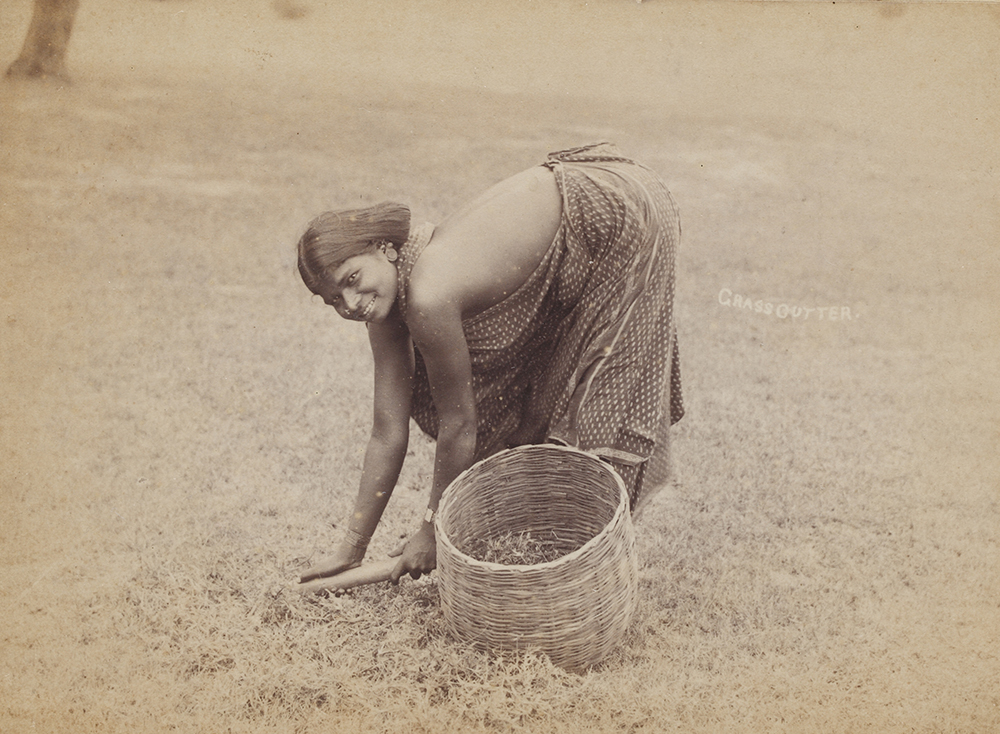 With the advent of British rule and the influx of Victorian standards of propriety and morality, the fine, translucent saris worn by Indian women were considered too salacious and indecent. As a result the blouse and petticoat were introduced by the British, as a norm for everyday dressing to be followed by Indian women. 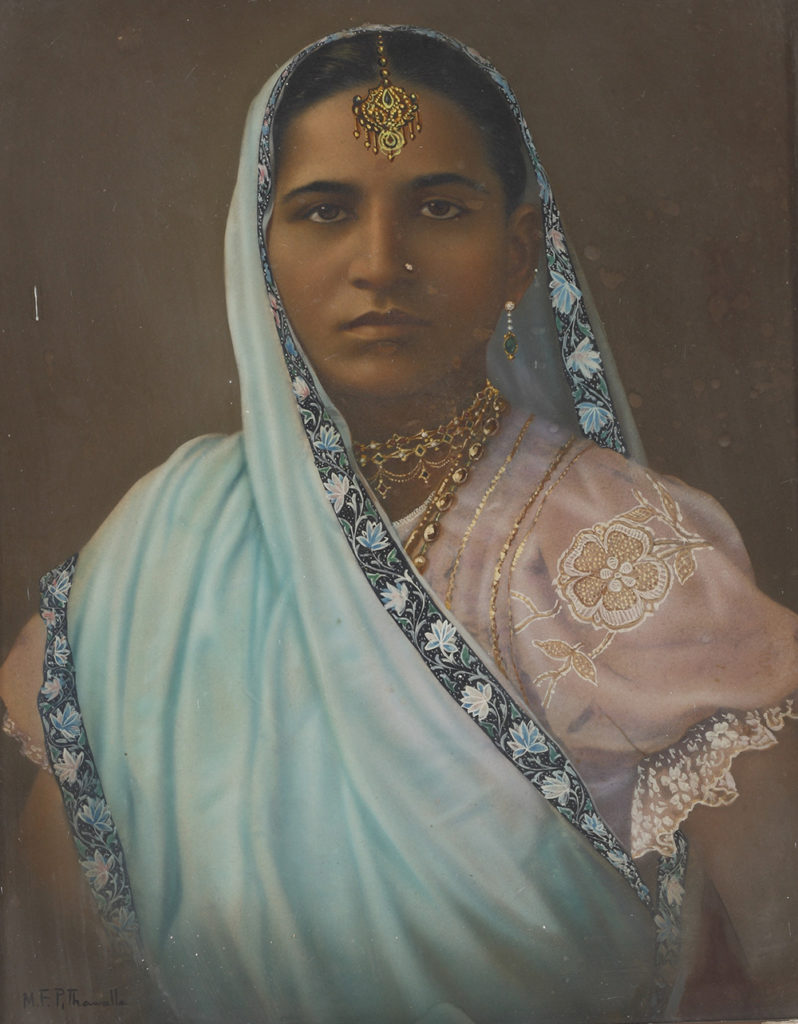 The industrial revolution began to influence India in myriad ways in the 1940s. While it served a boost to technological developments and production systems, it had an adverse result on the Indian handloom sector. Handspun and handwoven khadi saris were replaced by European mill-made chiffon saris, often worn with lacy petticoats and frilly blouses. This was especially popular among Parsi women. 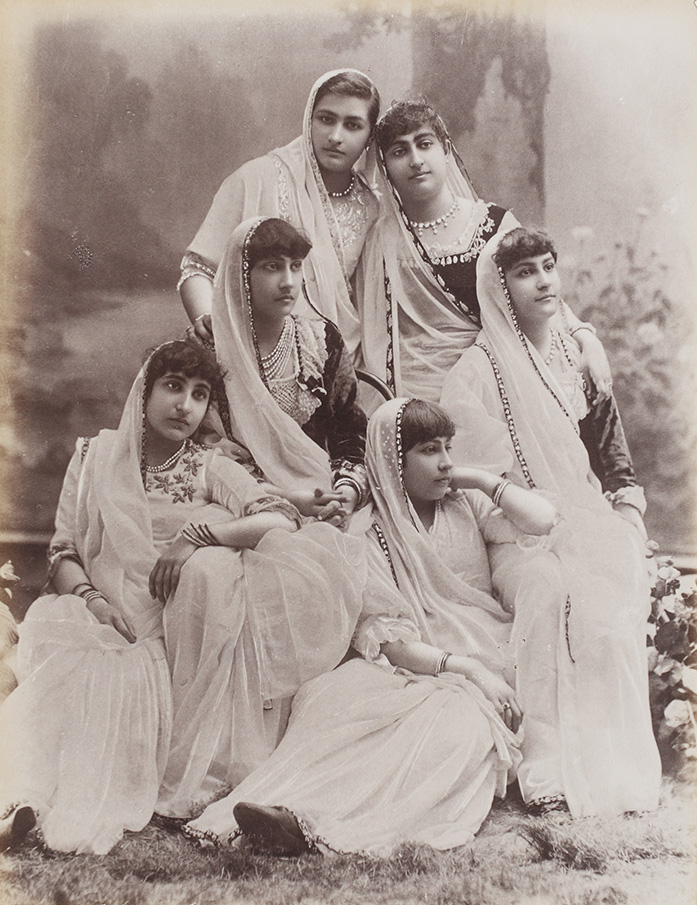 When the Swadeshi movement came into full force, Satyagrahi women wore khadi saris and cholis, often draped in the nivi style. Popularised by Gyanodanandini Tagore (Rabindranath Tagore’s sister-in-law), this went on to become the most popular style of wearing a sari at the time, and is still popular today. The nivi is the ulta palla style of wearing a sari, with the pleats in front, at the centre of the waist. This style was also made fashionable by its prevalence in Bengali cinema, and by looks that went on to become iconic in Hindi cinema, like the white chiffon sari worn by Rekha in the film Silsila (1981). 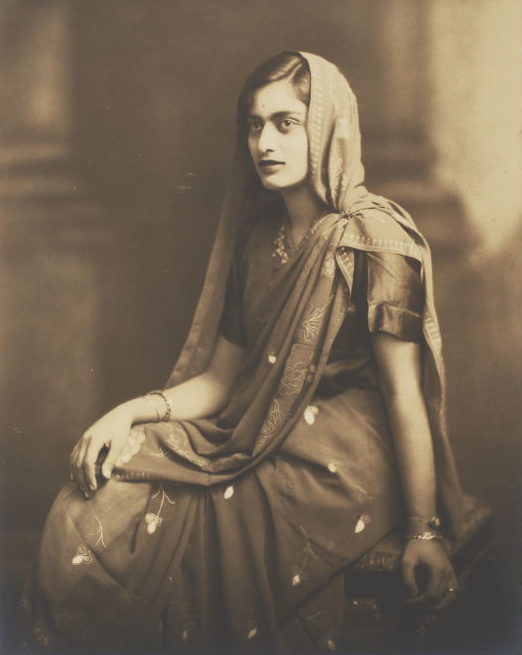 Portrait of a unidentified lady by Lafayette Studios

The sari is draped in more than 100 styles across the country, evolving with time and influenced heavily by geographical factors. A woman from the north of India could historically be found wearing a tunic with a woollen shawl draped as a sari, while a woman from Rajasthan, which experiences extreme summers, would drape hers in a relaxed, airy style. In fact Rajasthani women also covered their heads, both as a symbol of modesty as well to protect them from the extreme heat; sometimes they would even dampen the pallu in order to regulate body temperature. 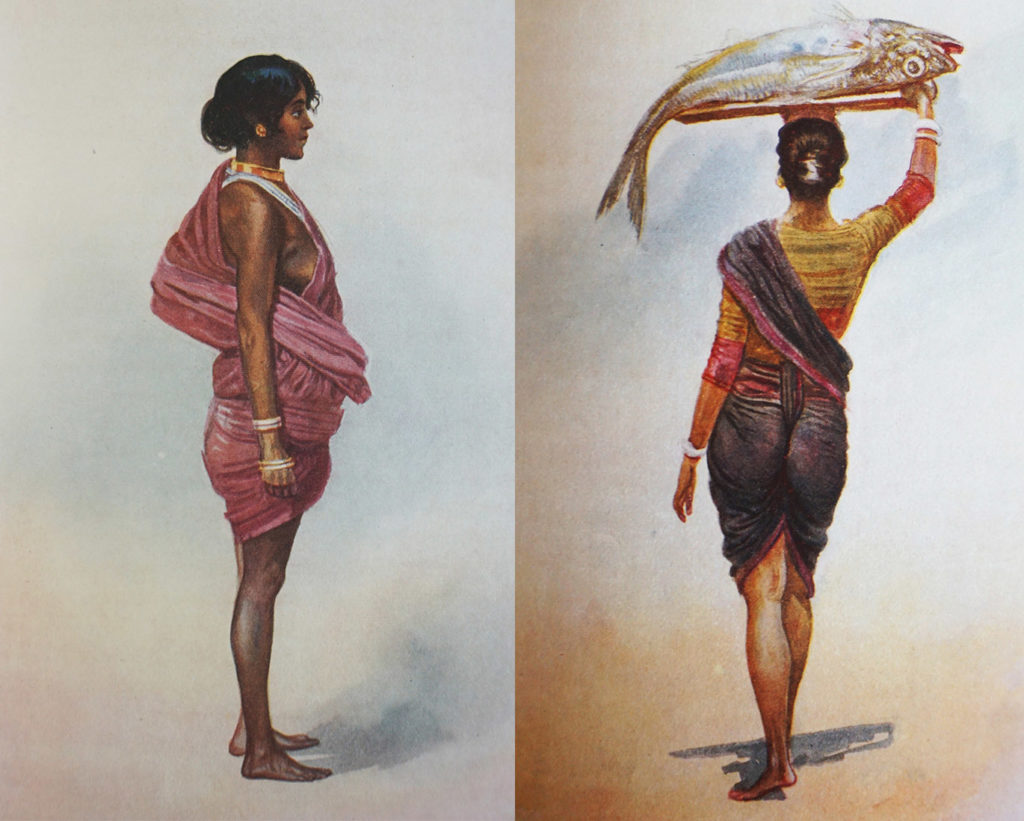 'A Denizen of the Western Ghauts' (left) and 'A Fishwife of Bombay' (right), from 'Women of India' by Otto Rothfeld, featuring illustrations by MV Durandhar

Quite apart from aesthetics, then, the sari played a functional role. Kolis spent most of their time fishing, with their feet in water — this required their women to have shorter saris, hence the nauvari (9-yard) sari was created, and worn with one end passing between the legs and tucked in the back, similar to the Gandhara women of the Kushana period. This helped women stay comfortable in the warmth and humidity of the Konkan region, while also maintaining their modesty. According to costume historian Rugmani Venkat, this drape was also popular amongst the 'nautch girls' of Maharashtra, as it allowed them to dance freely. 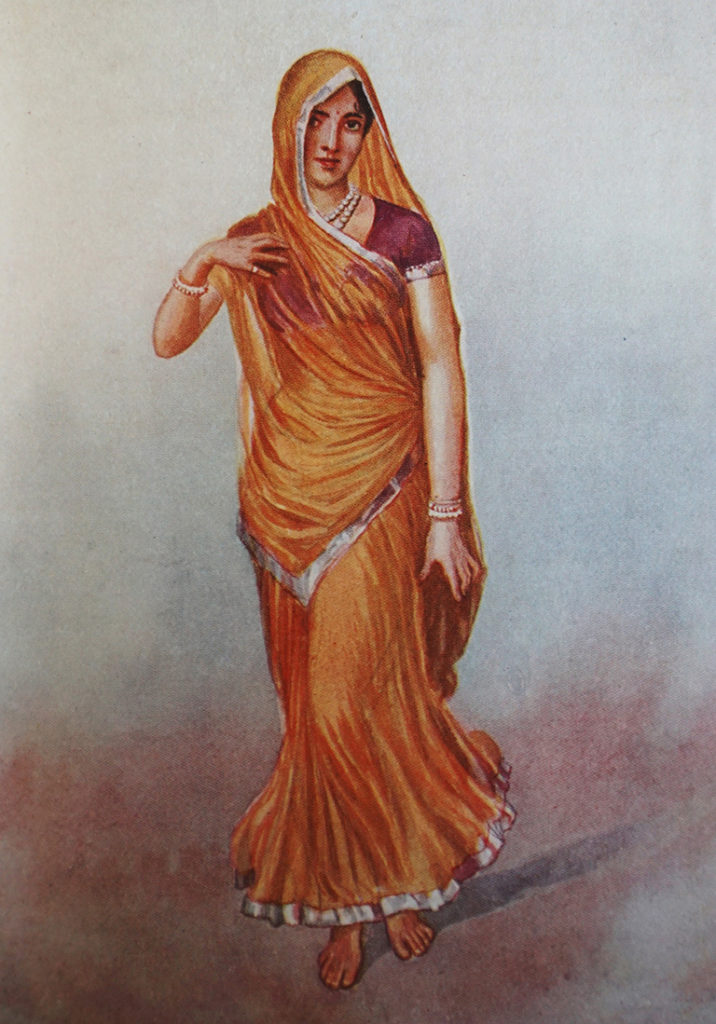 In the book Women of India by Otto Rothfeld, featuring illustrations by M.V. Durandhar, the sari is described more as a costume and less as a part of a woman’s lifestyle. But for an Indian woman, the sari is not a costume; it’s a medium of expression, a way of life. It lends her a sense of ownership, pride and belonging. It is her companion through good times and bad — worn to both celebrate her wedding day and to mourn the passing of a loved one. Every pleat, every fold of a sari has a story to tell.

Sanika Shah is an intern at Sarmaya

Fashion Culture | The Sari Series: An Anthology of Drape by Malika Verma Kashyap and Sanjay Garg at The Museum At Fashion Institute of Technology.

A Brief History of India's Traditional Saree by The Culture Trip

How The Sari Has Evolved Over Time by Strand of Silk