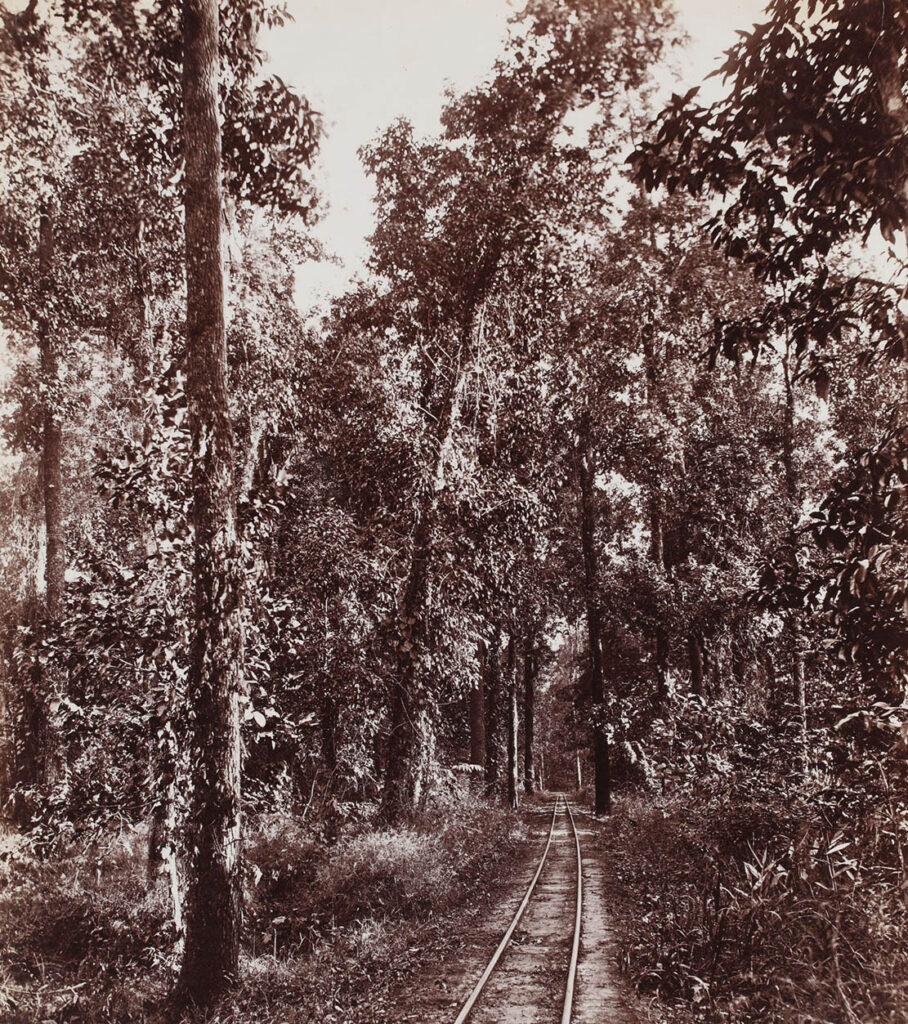 'A railway track between a jungle', Samuel Bourne

The term Anthropocene started being used by scientists, around the year 2000, to describe the current geological age we are living in. It is characterised by drastic changes to the earth’s environment, processes and biodiversity as a direct result of human activity. The moniker is a combination of ‘anthropo’ from the Greek for ‘human being’, and ‘kainos’ for ‘new’. There’s still debate on when the Anthropocene really began. Among geologists, the broad consensus lands on the year 1950, after World War II, when an overall increase in human activity was seen across the globe.

Other scientists, historians and authors argue that the beginning of the Anthropocene may date back to the late 18thCentury, when Britain’s Industrial Revolution gave rise to the first fossil fuel economy, a model later promoted in their colonies. This latter view led to the coining of the term ‘Capitalocene’ to highlight the widespread impact of a philosophy that valued profit above all else. In the 19th Century, wealth was created through colonialism and slavery. Human and animal lives, natural resources and land came to be seen as economic goods to be exploited for profit. This exploitation took many forms, some of which were heralded as signs of progress. Like the laying of railroads. 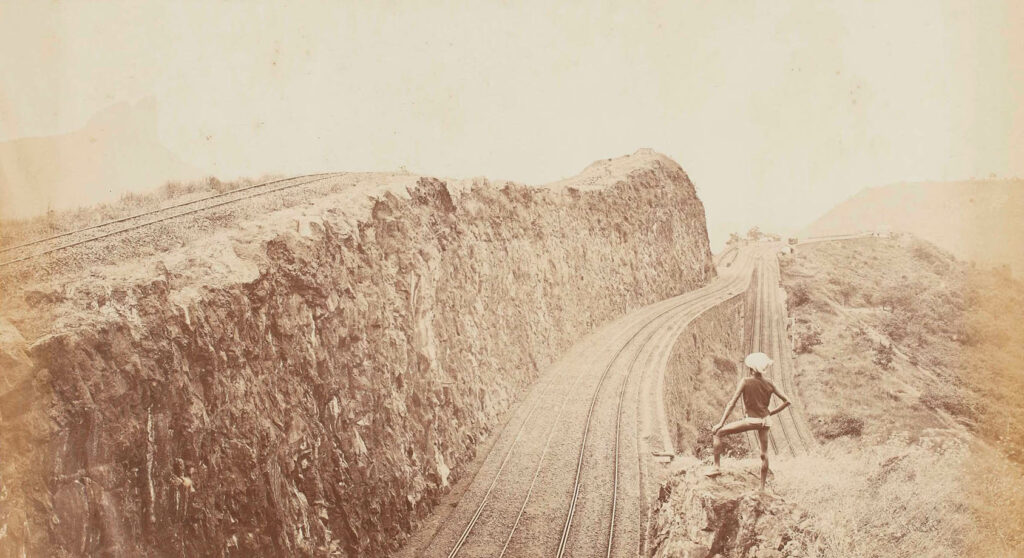 'Reversing Station On The Bhor Ghaut On The GIP Railway Showing The Runway Siding On The Left', c. 1859-1860, Alice Tredwell

In the 1850s, the East India Company began the construction of railway lines in the Subcontinent. No matter where this network spread—the Presidencies, Punjab, the Himalayas—it caused the destruction of wildlife and forests, and even people. India was the first Asian nation to build a network of railroads, which went from 33km to 38,000km in the second half of the 19th Century. This involved the razing of forests, carving of hills and the boring of tunnels through rock. 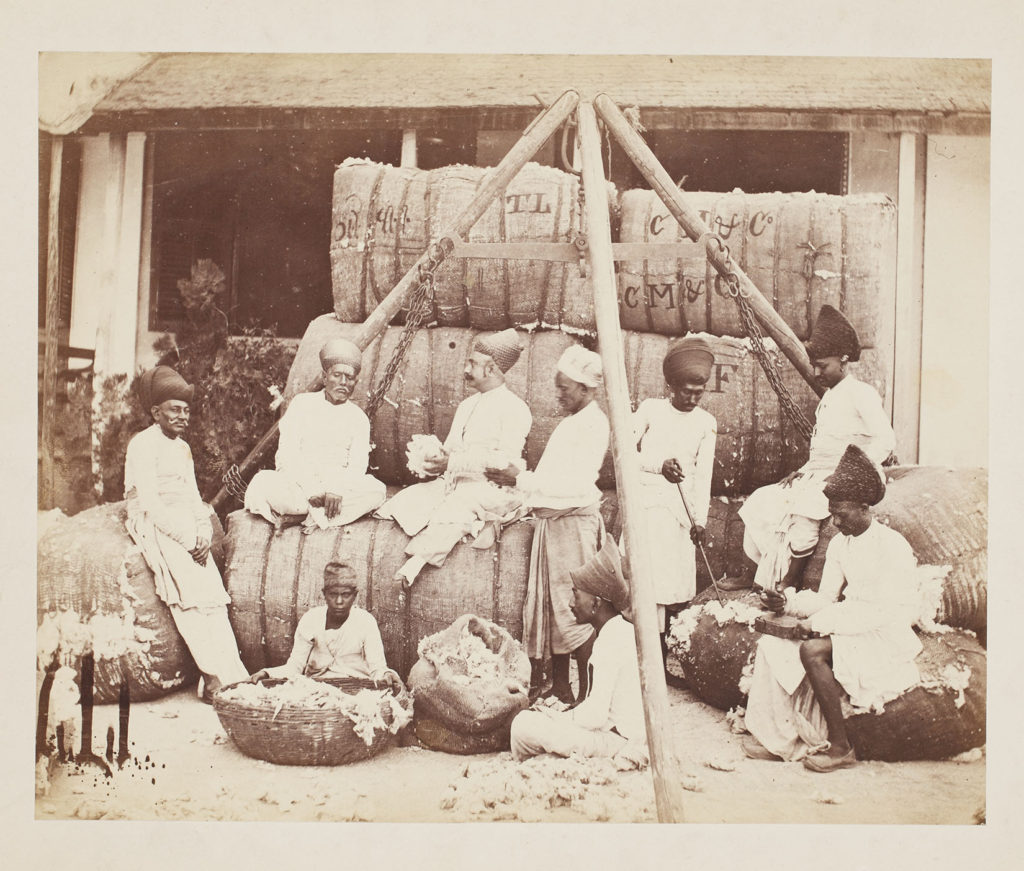 The choice for where the railway lines would be constructed was determined by the trade of cotton, silk, tea and other cash crops. The trade itself was beginning to show a malign influence on the environment. The repetitive planting of these monocultures drained the soil of nutrition, leaving farmers completely at the mercy of the markets as well as the monsoons. Trade demands after the completion of the railways only increased pressure on agricultural production.

The railways were proposed by the British East India Company to make the farm-to-market pipeline more efficient. One of the first lines to be built by the Great Indian Peninsular Railway, a precursor to today’s Indian Railways, was between the Bombay and Poona. It would connect the busy port city with the cotton-rich inlands of the Deccan. The route would go through the hills of Bhor Ghat, a perilous mountain pass on the Western Ghats.

These photographs of the construction of the Bhor Ghat railway line are attributed to Alice Tredwell, a mid-19th Century railway contractor and photographer. She arrived in India with her husband, Solomon Tredwell, a railway contractor in 1859 hired to complete this section of the Great Indian Peninsular Railway. However, Solomon died of illness soon after arrival, leaving Alice to take up the contract by herself – which she completed by 1863. During the process, she also meticulously photographed the construction of the line.

The construction of this railway line took over eight years and the human and environmental costs of the Bhor Ghat project were tragically high. Indian labourers were made to scale steep cliffs to reduce the incline of the mountains, without being provided with footholds or safety equipment. Thousands would fall to their death—one estimate puts the death toll at 24,000. By the time the project was opened in 1863, a total of 25 tunnels had been blasted through Bhor Ghat, leaving death and debris in their wake.

The building of railroads required machinery and engines, which were imported from Britain to India in pound sterling. But it also required plentiful raw material like firewood, which was cheaper to source locally. A lot of wood went into the construction of railways, starting with the tracks themselves. Timber, sal, teak and deodar were found to be best at weathering pressure and pests. Since teak was expensive and deodar grew only in the Himalayas, timber and sal were most used. British survey reports of the time estimated that India possessed timber equal to the railway demand.

According to historian Pallavi V Das, author of Railway expansion and its impact on forests in colonial India, 1853-1884, what fuelled the rapid deforestation of the time was a belief that India’s forests were ‘inexhaustible” and were in no danger of being over-exploited. Huge tracts of forests were destroyed, extending from the Western Himalayas to the Madras Presidency, and as the construction accelerated so did the depletion. For the Madras Presidency lines, it was estimated that each mile (1.6 km) required 1760 sleepers, which would last about eight years. Taking periodical renewals into account, it was estimated that every 100 miles of track would require 22,000 pieces of wood per year. 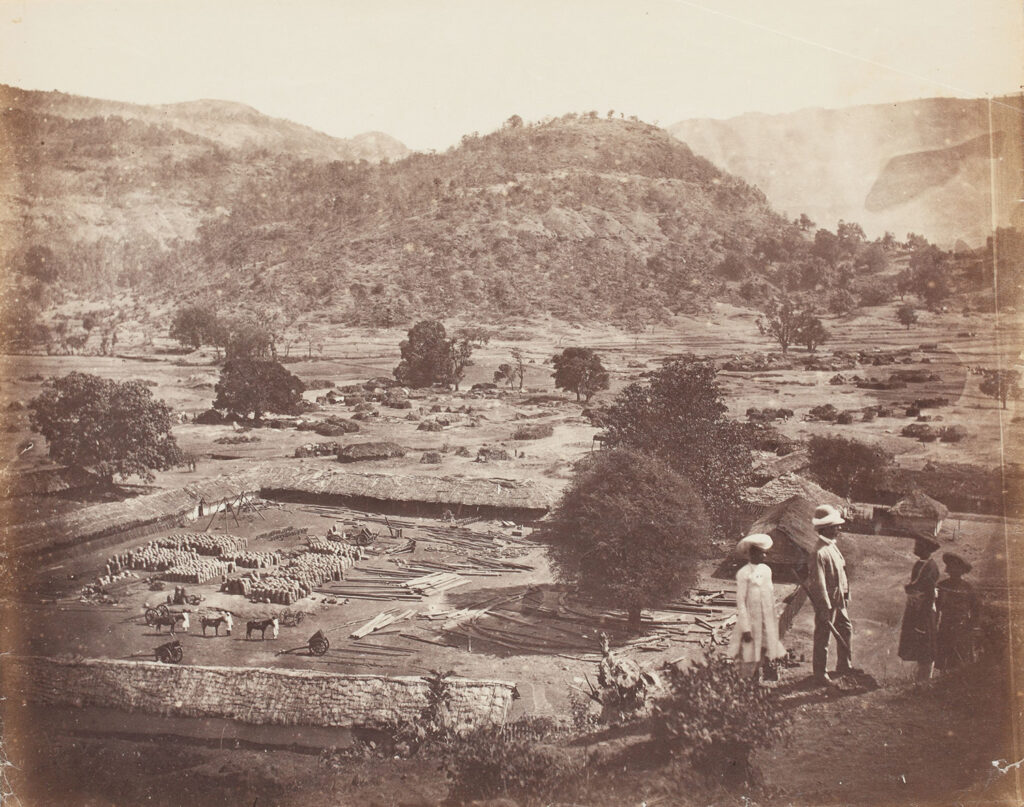 'View of the contractors_ workshops with Mr Clowser, joint manager of contract in the village of Oonee', c. 1859-1860, Alice Tredwell

Missing the forest for the coal

In the mid-1860s, the demand for wood in railways saw another sharp rise and this time for use as fuel. Steam engines needed coal, but a survey of the Subcontinent’s distribution of coal reserves revealed limited supply in Bengal and Central India. Importing coal from Britain was not a sustainable option thanks to steep transport costs. This scarcity began to be felt especially in the arid stretches of the Punjab province, which had a limited supply of timber and no coal mines at easy reach. Here, the railways began to rely on wood from rukhs, ie the forests of the plains, and the Himalayan regions nearby. 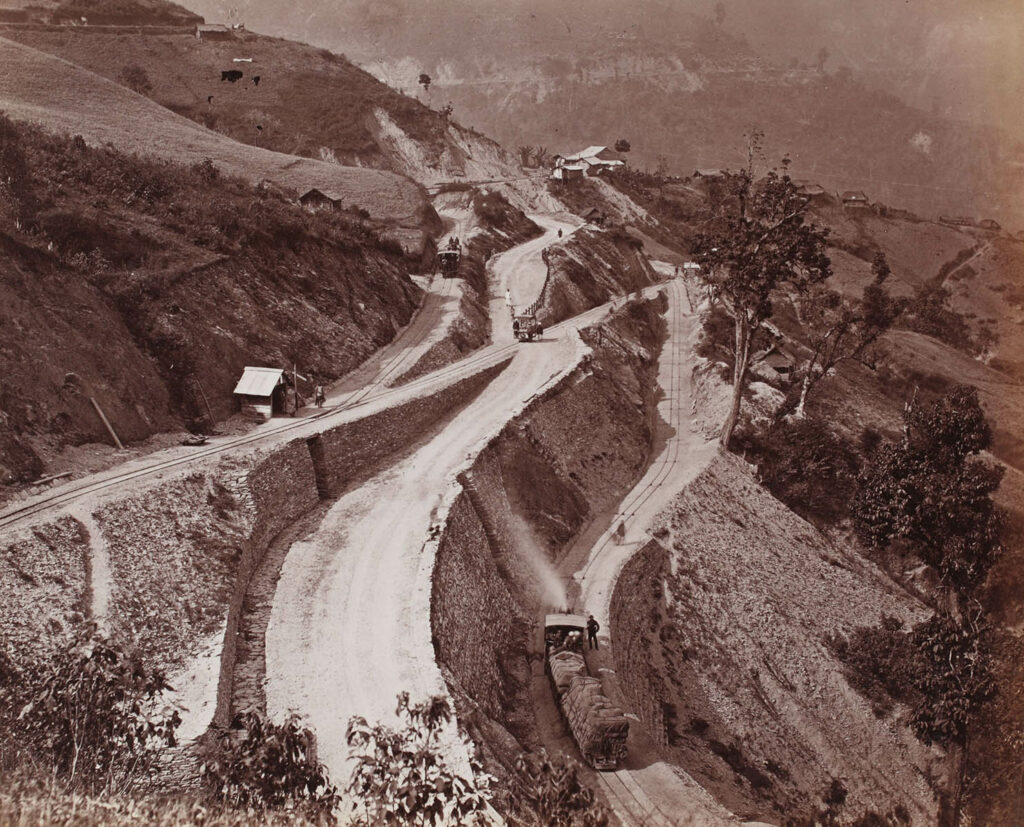 Fuel demand reduced green cover so much that in 1865, a Forest Department was set up to ‘conserve’ the forests. This move handed ownership of the land to the British government, who reserved areas exclusively for fuel. By 1870, nearly 4 lakh acres of plain forest land was reserved—the supply of wood from it would last only two years. By the mid-1870s, railway companies in the Subcontinent were forced to import coal from England. The seemingly inexhaustible forests of India were finally exhausted. 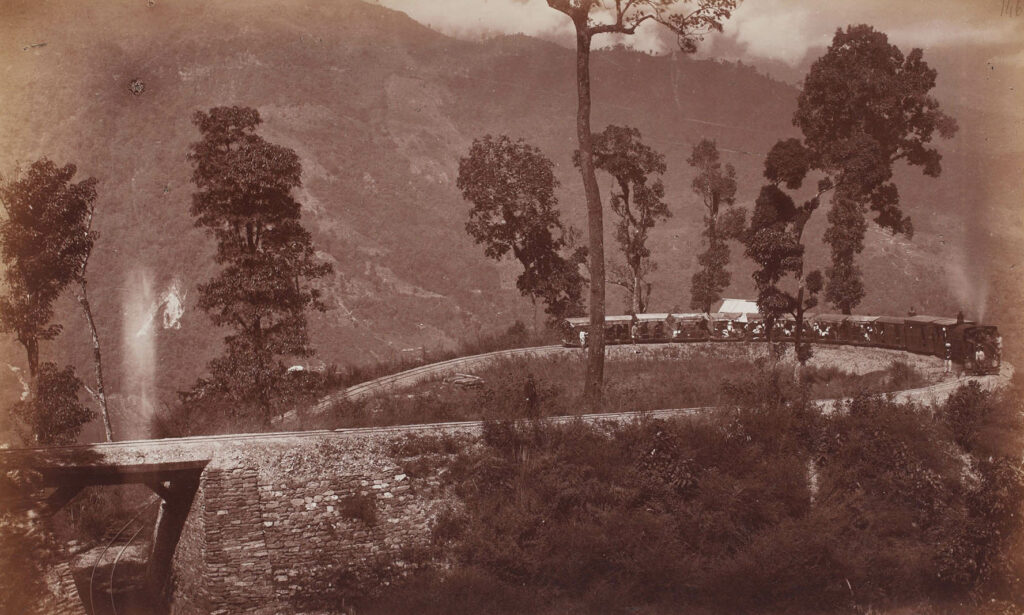 In conflict with the wild

As the rail network spread and rapid deforestation followed in its trail, the impact was seen on wildlife too. Telegrams sent during the construction of various railroads contain reports of tiger, blackbucks and elephants being sighted on the platform or station. These encounters were characterised in the media of the time as clashes between the jungles of India and the modern ‘civilising’ influence of British technology. The first incident of a train colliding with an elephant was reported in 1869, and these fatal accidents are common even today, especially in central and eastern India. Tigers and elephants are particularly susceptible. Ironic given the proud presence of the stately Asian elephant at the top of the emblem of the Great Indian Peninsular Railway. 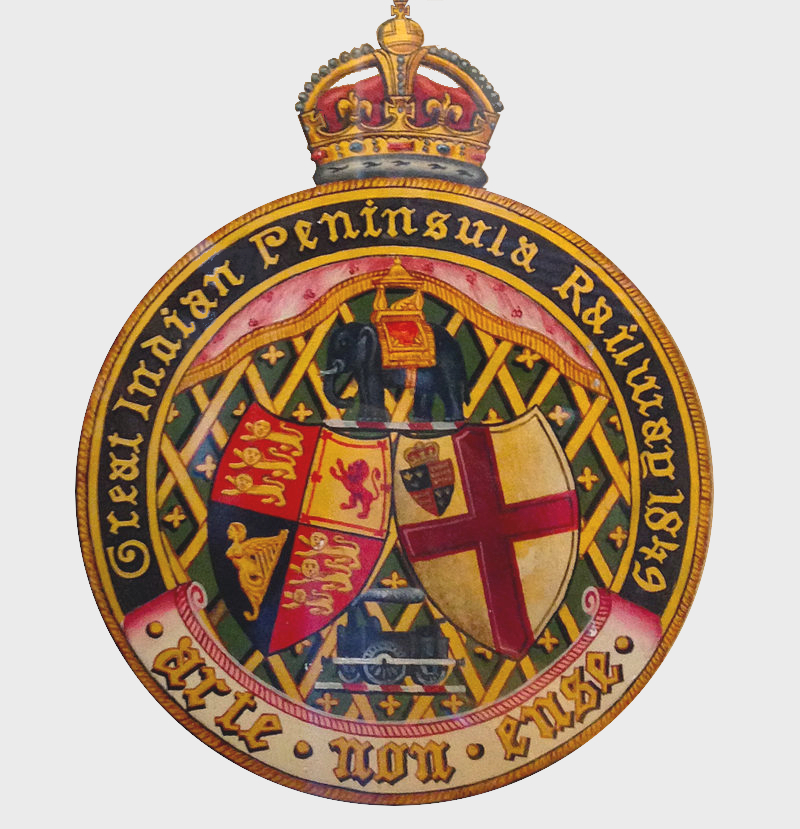 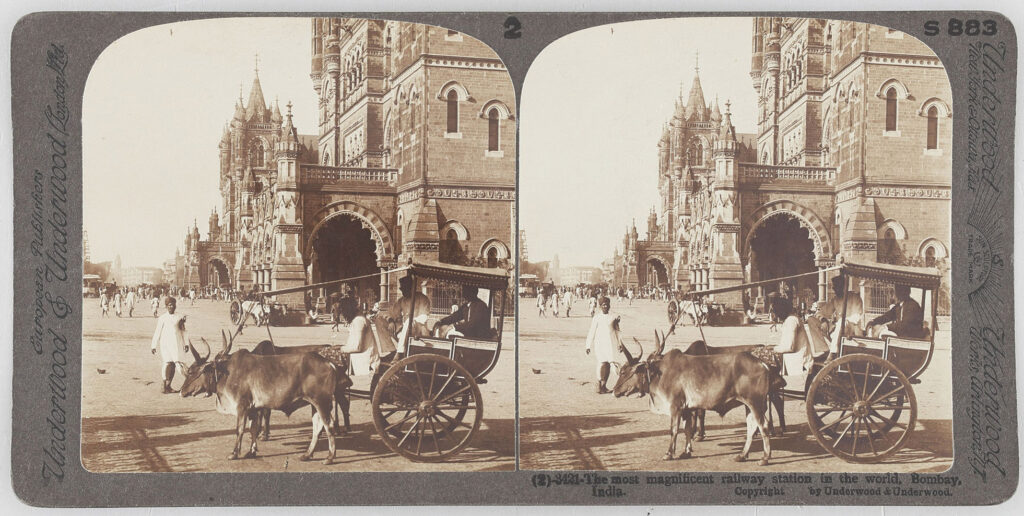 Victoria Terminus aka 'The Most Magnificent Railway Station In The World, Bombay, India', c.1900s

In the 20th Century, Indian railway companies continued to move in tandem with British Railways when it came to technological advancements. Coal was replaced by diesel—considered ‘clean’ energy at the time—and later oil was replaced with electricity. In 1925, the first electrical engine was used in a train that ran from Mumbai’s Victoria Terminus (now the Chhatrapati Shivaji Maharaj Terminus) till Kurla. The electric engine is today used by 63% of all Indian trains and the Railways Ministry has committed to gradually electrifying all routes.

In contrast with its troubled beginnings, Indian railways today offer one of the greenest transportation systems in the world. According to the 2017 book Railway Ecology, our country boasts the lowest CO2 emissions per passenger-km (10 g CO2/passenger-km) and the lowest rate of energy consumed per tonne of goods transported (102 kJ/tonne-km). In July 2020, Indian Railways announced that it would be a net zero carbon emitter by 2030. It is incorporating more green energy in the form of solar power and biofuel, managing waste and water more efficiently, and taking steps to reduce wildlife fatalities.

As train lines continue to expand, there is greater awareness about their harmful impact on sensitive eco-systems and vulnerable communities. There are citizen movements across modern India that protest the construction of new railway lines, metro sheds and bullet trains. Where the railway system was once seen as an unquestioned boon of colonialisation, today there is greater call for accountability from a service that transports over 1 billion passengers each year. It’s a redemptive step forward in the journey of one of the most enduring symbols of the Anthropocene in India.