Such was the virtuosity of Indian photographer Lala Deen Dayal’s work that it moved the sixth Nizam of Hyderabad Mir Mahboob Ali Khan to burst into the above verse. ‘Master of masters’ is no poetic exaggeration when you’re talking about pioneer of Indian photography.

When photography first arrived in India in 1840s from Britain, it was an art form restricted to the colonials. The only Indians who could afford the equipment and material, and the investment of time it took to adapt this French technology to the tropical climes of India were the extremely wealthy Maharajas. But in the mid-1870s, an Indian engineer emerged as an unlikely documentarian of both the British Raj and princely India. Over the course of a career that lasted till 1905, Deen Dayal not only matched but surpassed the skills of his European contemporaries.

Born in 1844 in Sardhana (a town near Meerut) to a Jain family, Deen Dayal studied engineering and after graduating, took up a job in Indore at the Public Works Department. It was while working there as a draughtsman that he developed a keen interest in photography. It was initially a hobby, but at the encouragement of Maharaja Tukoji Rao II of Indore state, he opened a studio in 1875. Soon after, he acquired the patronage of Sir Henry Daly, agent to the Governor General of India and his prestige as a photographer grew. One of the earliest landmark moments in his career came in 1875-76, when Deen Dayal photographed the Prince of Wales (later King George V) on a tour of India.

In the early 1880s, he travelled with the diplomat Sir Lepel Griffin, producing images for the 1886 publication, Griffin’s Famous Monuments of Central India. Deen Dayal’s photographs of palaces, forts and temples in Gwalior, Khajuraho, Rewa and Sanchi provide a striking look at the architecture of this region and a bird’s-eye view that was unique for the time.

Lala Deen Dayal would soon retire from government service and become a full-time professional photographer. Almost immediately after, he entered the service of his most flamboyant and wealthy patron, the sixth Nizam of Hyderabad. Deen Dayal was appointed as the Nizam’s court photographer in 1894. Not only did he capture the pomp and splendour of royal life, including lavish durbars and big-game hunts, he also chronicled significant developments in the state, like the construction of rail lines and relief efforts during droughts and famines.

As the resident photographer, Deen Dayal was a constant companion of the Nizam. From the opulence of palace interiors and pageantry to the fabulous leisure-time of the royals to intimate portraits of the royal family, it was his job to capture everything for posterity. The Nizam was so impressed with his work that he bestowed upon him the title of Raja Bahadur Mussavir Jung or “Bold Warrior of Photography”. From then on, he would be known as Raja Deen Dayal. 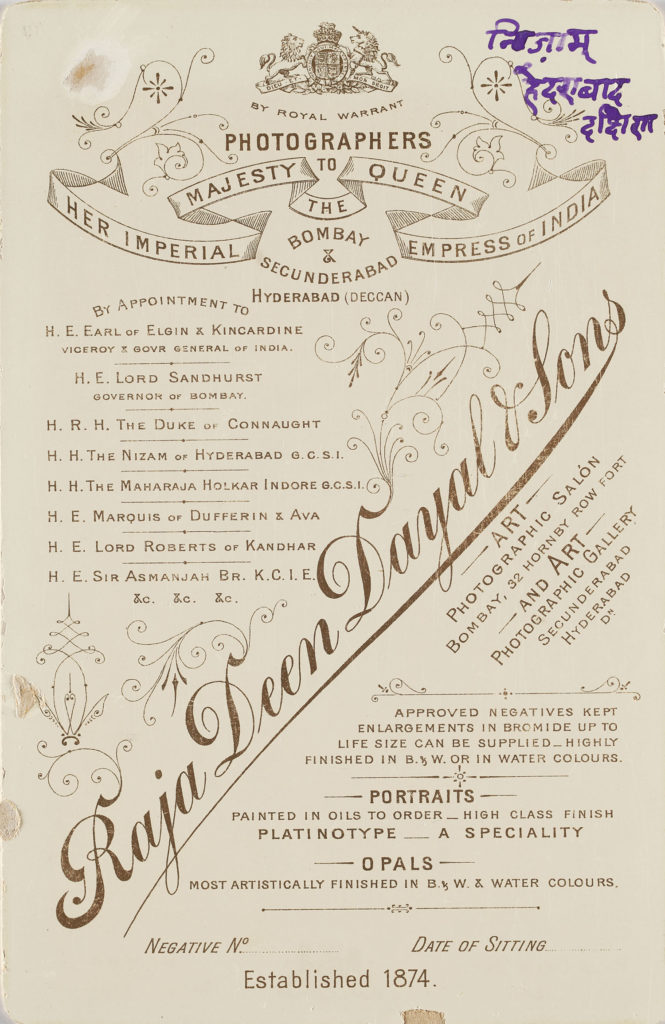 Over the course of his life, Deen Dayal opened photography studios in Indore (around 1874), Secunderabad (around 1886) and Bombay in 1896 to capitalise on a growing market for portraiture. He is credited with setting up the first ever ‘zenana studio’ to photograph purdah-nashins, upper-class Muslim women who were shielded from public view and lived in all-female wings of the house or zenanas. Deen Dayal trained a woman photographer to visit the veiled women in their chambers and take photographs, develop and finish them in a women-only studio. The original negatives would be handed over to the clients or destroyed to ensure complete privacy.

Deen Dayal’s legacy as a photographer has endured partly due to the sheer variety of his subjects. Some of his pictures were used as records by the colonial administration, or as documents of cultural heritage. His photographs were compiled into albums and presented as gifts. Prints of his most popular works were sold at his studios. But the appeal goes beyond novelty and nostalgia. Deen Dayal’s images display a strong sense of composition and a full range of tonal contrasts. His work is held in high regard for the superior visual strategies they employed, which included the use of water reflections, asymmetrical layouts and bold framing devices.

The master photographer consistently maintained a high level of technical excellence by adopting the latest innovations and investing in world-class equipment and custom lenses, which he would have imported. Following his death in July 1905, his son Gyan Chand continued to run the studio enterprise and subsequently his sons Trilok Chand, Hukum Chand and Ami Chand would take over the family business.

Lala Deen Dayal is considered by many as the great Indian photographer of the 19th century and for good reason. The sheer number of the images he and his studio produced (estimated to be over 30,000) combined with the remarkable breadth of his skill that rendered architecture, landscapes, military maneouvres, royalty, festivals and famous visiting dignitaries, have cemented his status as an unparalleled icon of image-making in India.