All images are © Sarmaya Arts Foundation

There is no deeper, richer way to decipher and trace the history of any dynasty than through numismatic study. Look at the coins in your pocket — you’ll see imagery that aligns with your government’s ideology, a denomination which (when found in hoards) can deconstruct your state’s economy, and a legend (writing) which tells you the year and place it was minted as well as the state it was used in. In the present, it may not mean that much, but in the future, it will. Your old 1000-rupee note is now a source for the history of demonetisation.

The abundance of dates — and therefore, accuracy — that history students hate is a gift from numismatic studies. It is because of these coins that a timeline of the past can be formed. Mughal coins had mainly writing instead of imagery, which gave us even more information. They could be used to talk about the religious, political and geographical expanse of the empire.

[WATCH: ‘Golden Age: What Mughal Coins Tell Us About the Great Empire’ by Paul Abraham]

As Akbar’s career was almost entirely spent on elephant-back, in one conquest or another, it is a fair assumption to make that the travelling mint was created by him. After all, living in a camp naturally necessitated a mint inside that camp. However, the credit for the practice actually goes to Akbar’s grandfather, Babur. 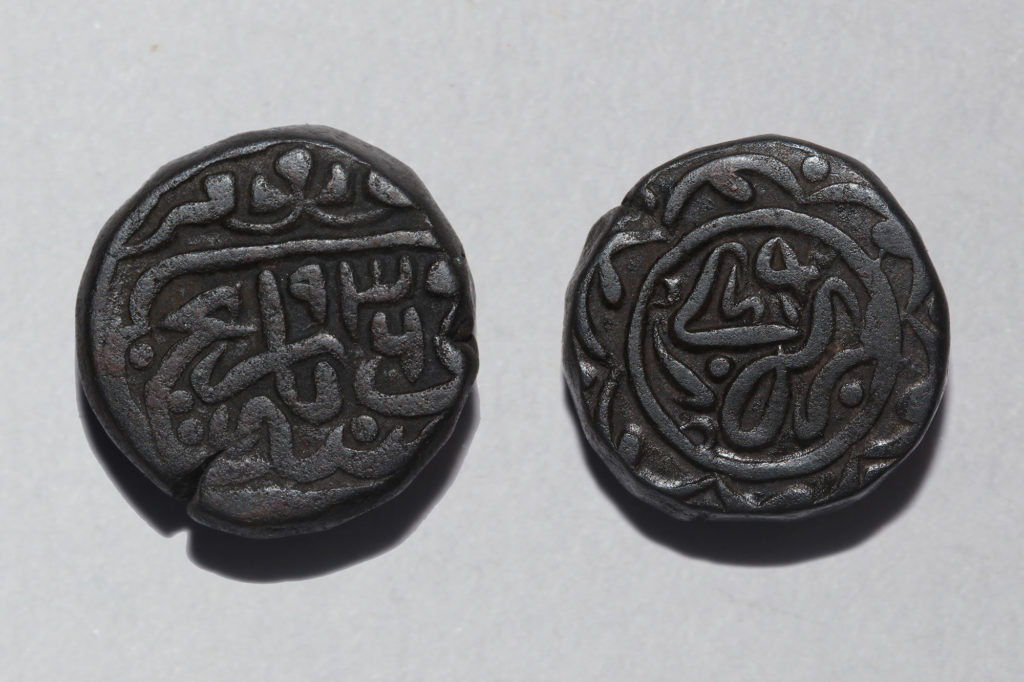 The majority of coins issued in Mughal camps bear the mint name Urdu Zafar Qarin, literally meaning ‘camp associated with victory’, while other variations may use Urdu, meaning ‘camp’ or Urdu Dan rah-i-Dakhan, meaning ‘camp on the road to the Deccan’; Babur’s coins specifically use Urdu. It is worth noting that while such a mint was naturally used to commemorate victories by issuing coins on the spot, other irregular minting was also conducted on prominent occasions.

According to numismatist Amar-ur-Rahman, the need for Babur to mint a coin in a travelling camp arose in AH 935 & AH 936 (1529 AD). The dates are related to his expedition to the East, which lasted from January to April AH 935 and is known as the final major battle in Babur’s life — the Battle of Ghaghra. 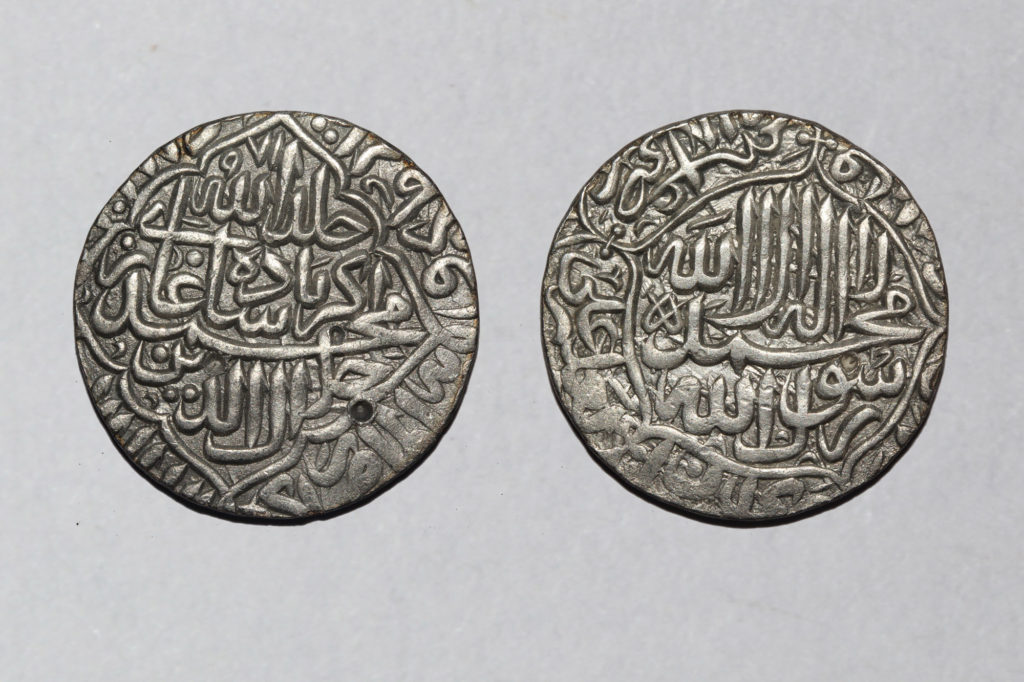 Akbar, on the other hand, used the Urdu mint more extensively in his career. In Ain-i-Akbari, the third volume of the Akbarnama, a mint by the name of Mu’askar-i-iqbal, literally meaning ‘camp of good fortune’, appears. Earlier numismatists had translated it as the seat of the government, but S Hodivala is of the opinion that this particular mint is the same as Urdu Zafar Qarin and Dr PL Gupta also points out that the term Dar-ul-Khilafat, literally meaning ‘seat of government’, appears on a variety of coins instead of Agra, which was the capital. The term is present in coins from Ahmedabad, Akbarpur, Awadh, Bahraich, Dogaon, Jaunpur, Lucknow, Lahore, Malpur and Qanauj, implying Akbar’s presence in these places at the time the coins were minted, as one of his titles was Khilafat-i-ilahi.

Since 1523, Babur had directed his attention to the conquest of Hindostan. Sustained attempts led to the capture of Punjab and its almost immediate abandonment in 1524-25. In March 1526, Babur began his march towards Delhi, the capital of the Lodi dynasty, and on April 1st his army faced that of Ibrahim Lodi, the Afghani Sultan of Delhi. 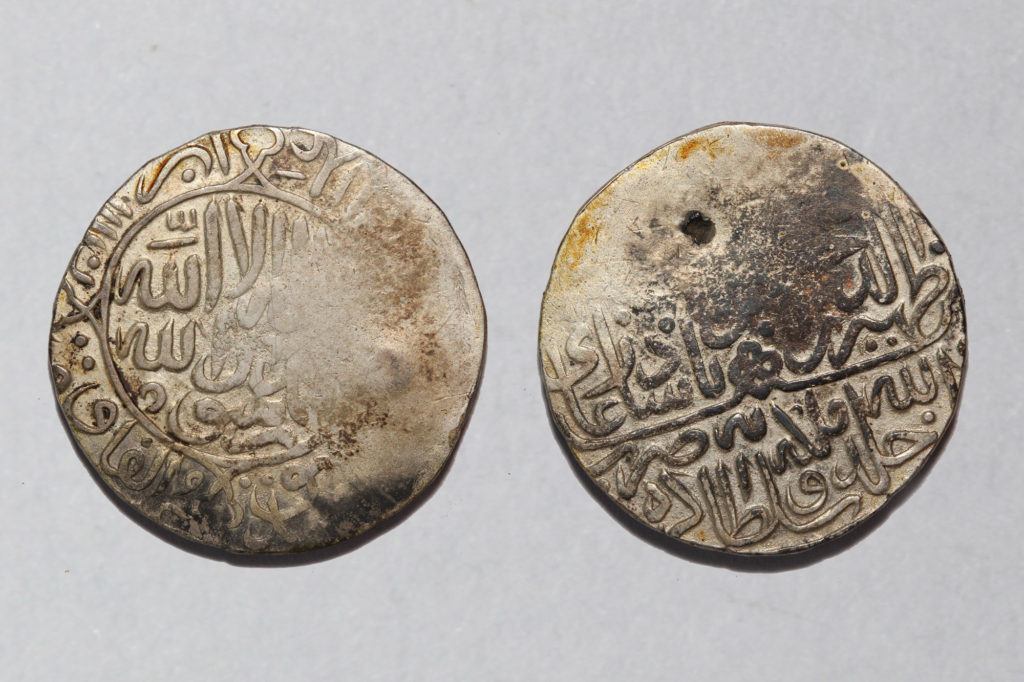 Issued by Babur on the conquest of Agra

Though the Mughal army was considerably smaller, Babur dominated the battle. He used what was called tulughma, a military tactic by which he divided his forces into smaller divisions with right and left flanks that encircled his opponents, a technique Babur learnt from the Uzbeks. Once it was surrounded on all sides, the Lodi army faced several hardships and lost the battle despite having war elephants, a larger army and the considerable advantage of home turf.

This defeat was the moment in history when the Delhi Sultanate fell and the Mughal dynasty was established. In May of the same year, on his father’s orders, a young Humayun laid siege to Agra, and it was here that Babur decided to build his capital. And so, from 1526 until the seat of government was moved to Delhi in 1638 by Shah Jahan, Agra was the Mughal centre of power.

Rebellion in the Family

Akbar ruled for almost half a century while his eldest son Jahangir got older and more impatient, as well as increasingly afraid that he might not see himself ascending the throne anytime soon. So in 1599 AD, the 30-year-old prince announced his independence in Allahabad while Akbar was engaged in the Deccan. Here, Jahangir assembled his own army, read the Qutba  and even issued coins in his name, in an open act of rebellion. The relationship between father and son remained strained until Akbar’s death in 1603.

In the Turzuk (an account of Jahangir’s reign from 1605-1627), Jahangir denies having rebelled against Akbar but admits to several occasions that led to a misunderstanding between emperor and prince. Jalaluddin, a Persian scholar from Allahabad, believes otherwise. 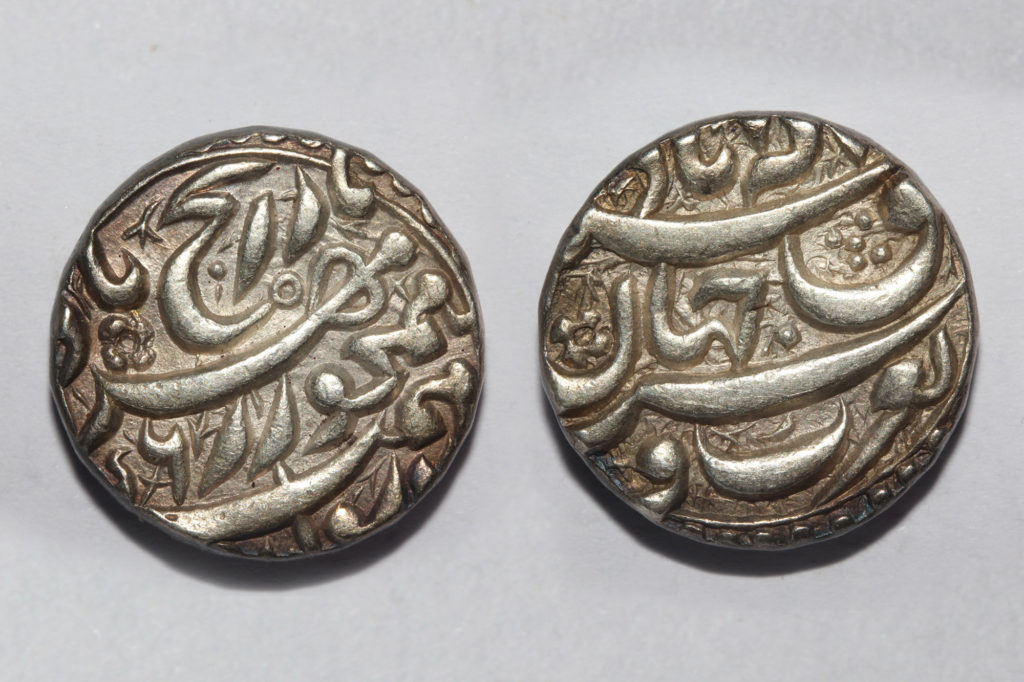 Issued by Jahangir in rebellion in Illahi year 46

He proposes three arguments in the book Coins of Jahangir: First, during Jahangir’s fifth regnal year, the Turzuk refers to him bringing a throne from Allahabad to Agra transported by Daulat Khan. This throne had newly made legs and featured inscriptions mentioning Salim, Jahangir’s pre-accession name, in two places. Dated AH 1011 (1602 AD), the inscriptions are ‘Shah Salim’ and ‘Hazrat Sultan Salim Akbar Shah’. Both Shah and Sultan are titles ascribed to the monarch of the Muslim state, not to princes. Further, on the legs of the throne, engraved in smaller letters, were the words: ‘Noor-Uddin Jahangir Baadshah Ghazi’. 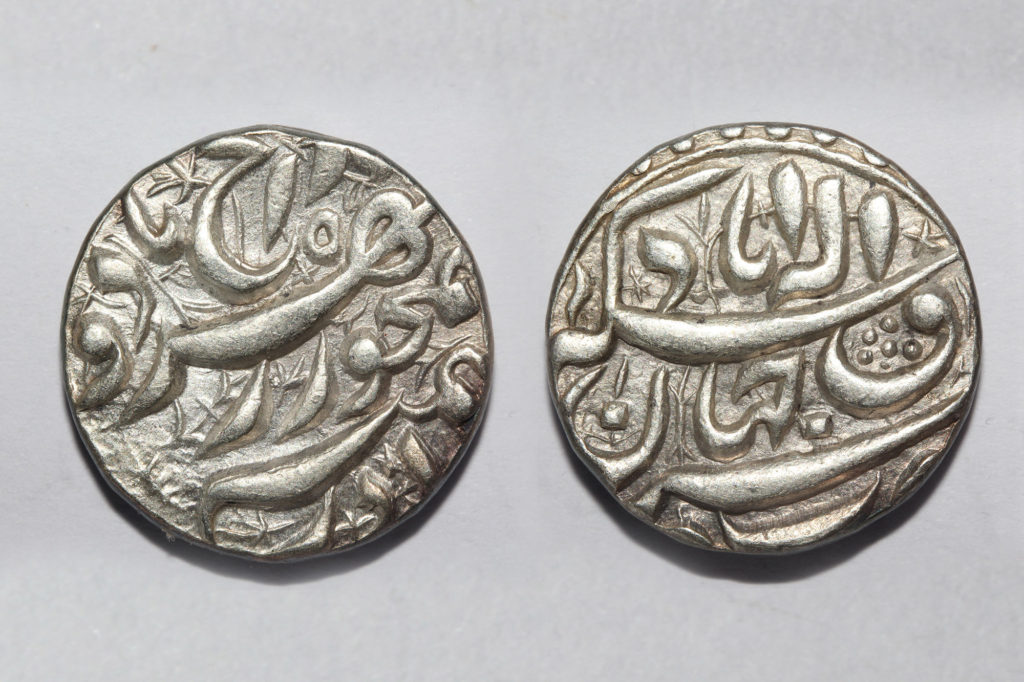 Issued by Jahangir in rebellion in Illahi 47

Second, Jahangir issued a farman (decree) in Ilahi 47 (AD 1601), and the round seal of the farman describes him as ‘Muzzafar-ud-din Waldeen Sultan Salim Badshah’. And third, the issue of coins in the name of Salim at the Ahmedabad mint, Ilahi 50 — Jalaluddin suggests that this issue was predated or minted in Allahabad and transported to Ahmedabad, which would explain why it is different. However, Akbar died in the same month as the issue of the coin, so it is uncertain whether the coin was issued before or after his death, making this argument a shaky one.

The Deccan campaign was led by Aurangzeb much before he ascended the throne, and he is credited with the largest expansion of the Mughal Empire. He led the campaign against Bijapur, Ahmednagar and the Marathas, and his father Shah Jahan gave him the title of Viceroy of the Deccan in 1636. Aurangzeb’s 30-year dream was the conquest of Hyderabad and Golconda, which were held by the Qutb Shahi dynasty. 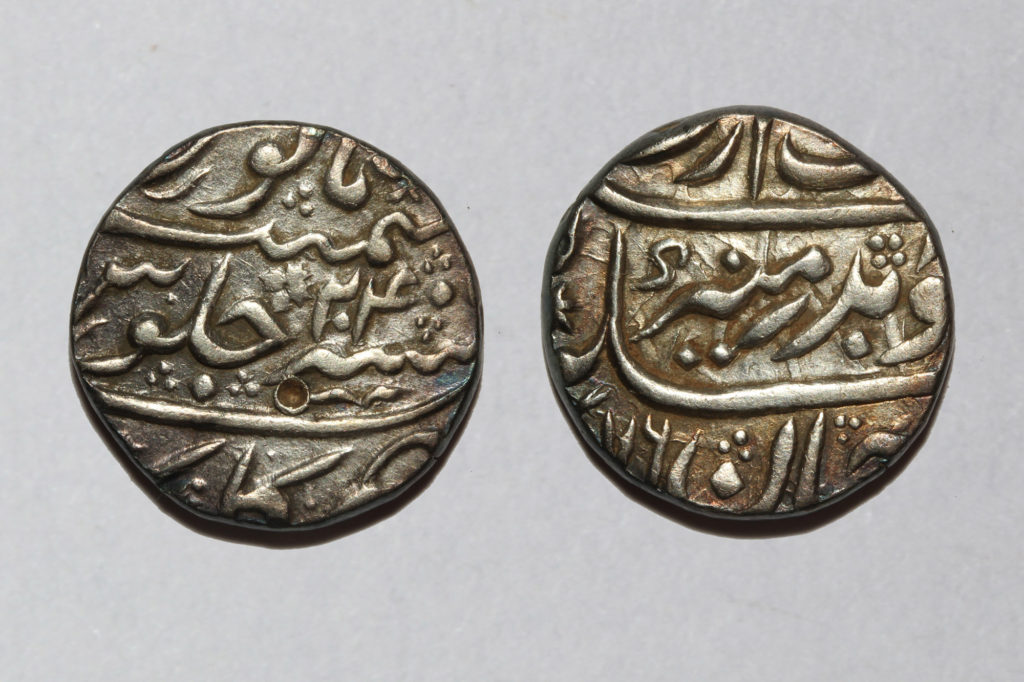 Issued by Aurangzeb to mark the siege of Golconda, 1076 AH, regnal year 24

He sent Azm Shah, Ghiazuddin Khan Bahadur, Hasan Ali Khan and others to take Hyderabad. The army reached Malkhed in 1684, where it was faced with Qutub Shahi forces under Shaikh Minaj and Mir Ibrahim. In six months’ time, Malkhed was crossed as the Qutb Shahi forces retreated, reaching Dhobipatta. According to the Futuhat-i- Alamgiri (a historiography by Ishwar Das Nagar), Mir Ibrahim was offered a monetary incentive by Mughal officials, which he accepted. He was imprisoned when the Shah found out but then released due to the Prime Minister’s belief that Shaikh Minaj had given them false information and that Ibrahim was innocent. During this confusion that erupted in the Shah’s court, Mir Ibrahim escaped and joined the Mughals. And the Mughals besieged Hyderabad. 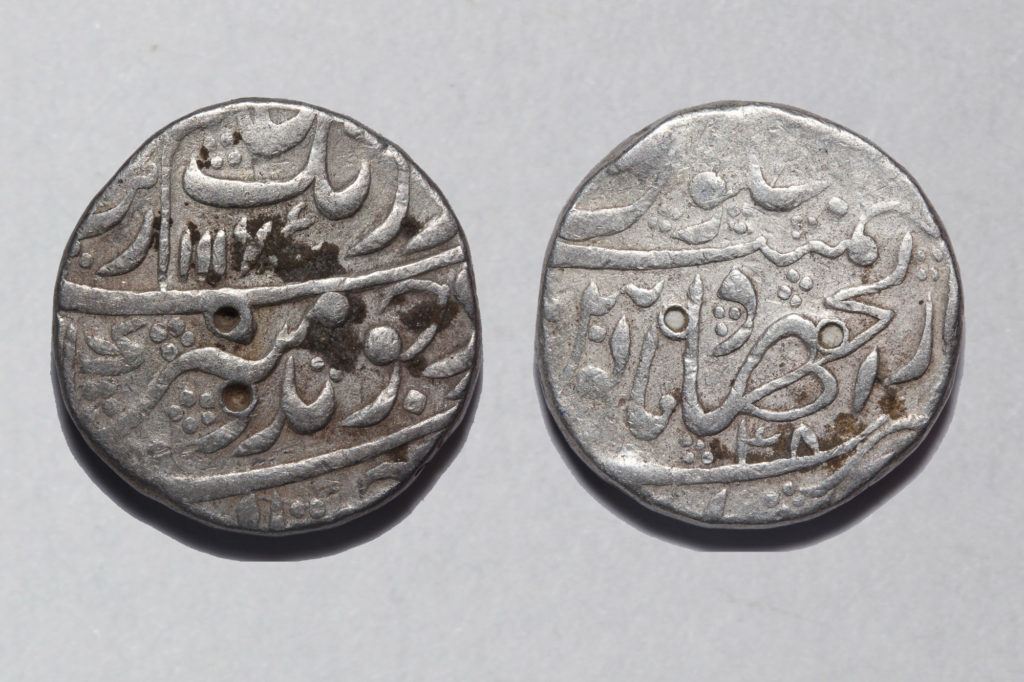 Issued by Aurangzeb to mark the siege of Golconda

Two years passed without his forces succeeding in taking Golconda, till Aurangzeb himself arrived at the scene and laid siege for the third and last time on January 14th, 1687. He appointed Mir Jumla to lead 10,000 men for the siege and put Ghiazuddin Khan Siddiqui Feroz Jung in command of the artillery. The Mughal army surrounded the fort with men, artillery and 100 cannons, including the massive Fateh Rahber cannon.

The fort itself was a marvel, 400 feet high with an eight-mile granite wall enclosing it, and iron spikes on the gate so that war elephants could not knock it down. The impregnable fort was defended by the Qutb Shahi army under the command of Abul Hasan Qutb Shah. At night, the Mughal infantry would assemble scaffolding, allowing them to shoot grenades reinforced by matchlocks and arrows. However, these attempts too remained unsuccessful.

The Mughal army faced heavy losses and hardships, with the flooding of a nearby river leading to food and water scarcity for long periods of time. The siege lasted eight months and finally ended through subterfuge, with the help of Qutb Shahi official Sarandaz Khan, who opened the back gate of the fort for the Mughals.

Aurangzeb repaired the fort and minted coins both at Hyderabad and Golconda, and gave the former the epithet of ‘Dar-ul Jihad’ (seat of the holy war).