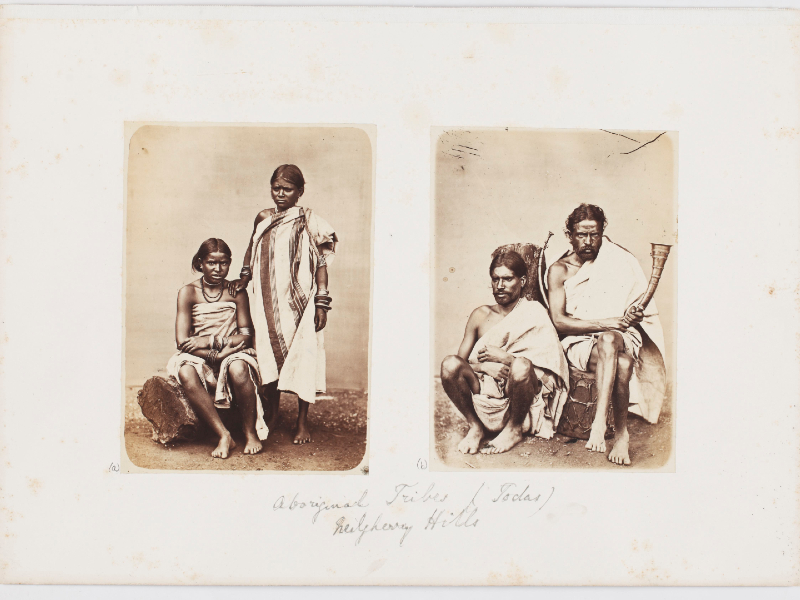 Who is an Indian? There are several ways in which photographers over the years have attempted to answer this question. Obsessed as this art form still is with representing the ‘other,’ early portraits in India were taken by foreigners and for a foreign audience. Victorian society was a fast-developing visual culture. From the casual fun of illustrated weeklies, penny dreadfuls, great exhibitions and circuses to high-stakes science, an interest in spectacle surged in 19th-century England and the camera arrived just in time to supply a steady stream of the exotic. 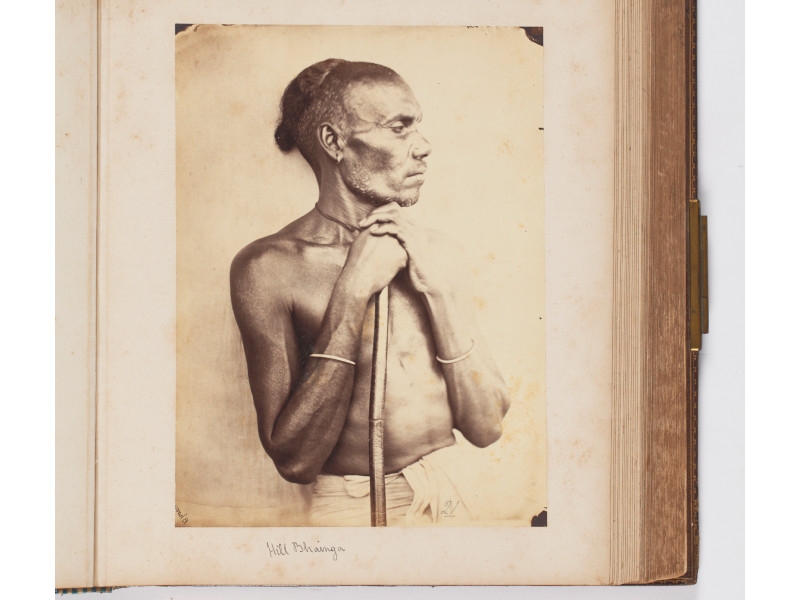 From ‘Aborigines of India’, attributed to Benjamin Simpson, 1860s

Older forms of mimesis from India were exclusive. Illustrations, etchings and portraits, were objects of some prestige since it was only kings and noblemen who featured in them. “Traditionally, portraiture is not simply the depiction of a face or a figure,” says Diva Gujral, the co-author of Photography in India. “It involves a codification of the collaboration between the subject and the person making the painting or portrait.” These visual symbols from India, as anthropologist Christopher Pinney wrote, were seen as “unreliable, mysterious and deceptive.” They were mostly, after all, paintings and writings by expats or travellers for fellow Europeans. Photography, in contrast, quenched the need for a “stern fidelity” – it offered to the colonial viewfinder an India that could be categorised, surveyed and systematically harnessed for resources. Indians were to be documented and slotted tidily into an index. 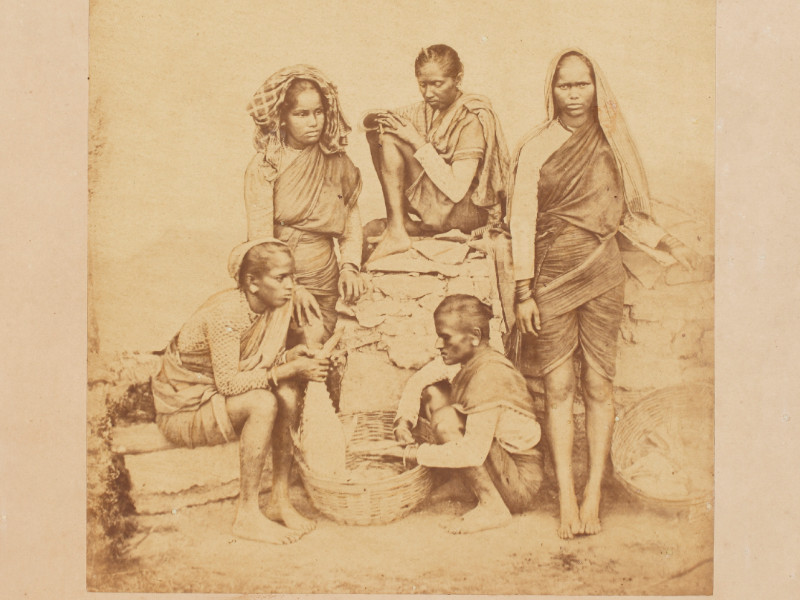 Fisherwomen of Bombay, from ‘Oriental Races and Tribes’ by William Johnson, 1863 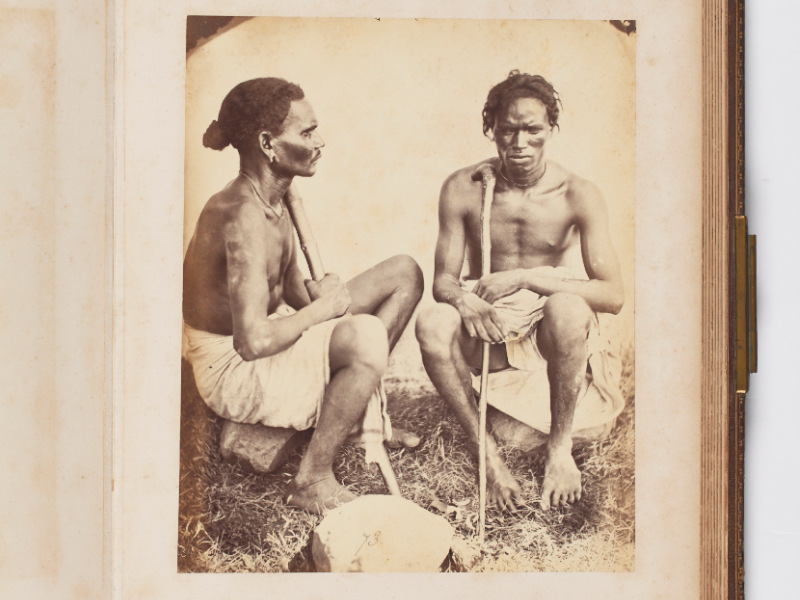 From ‘Aborigines of India’, attributed to Benjamin Simpson, 1860s

When the native became the object, in studying him, the ethnographer became a thinking, reasoning subject. Let’s call it the illusion of The Ethnographer’s New Clothes – these biotype photographs were taken as unquestioned facts because of the perceived accuracy of the medium. However, he collected images on his armchair from government officials, missionaries, and other colonial and commercial agents, without direct observation or data collection. Even his study subjects were abducted from the field and dragged into studios, removed from time, place and context. 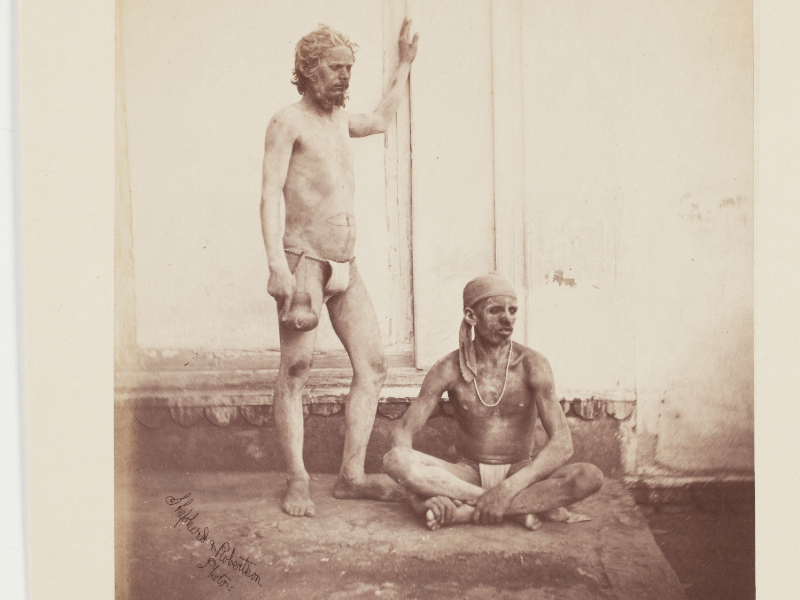 Udasees from the Sutlej, from ‘The People of India’, by Shepherd and Robertson, 1860

Pinney gives the example of The People of India album, the most notable specimen of the ethnographic photography genre. The album was displayed at a meeting chaired by English biologist and anthropologist Thomas Henry Huxley in 1869 along with a paraphernalia of Indian artefacts including quartzite implements from Madras and almond-shaped ones from Bundlecund, better known as Bundelkhand. His notes reveal that the three Korewah hunters from Chota Nagpur had never been so far from their homes and never interacted with Europeans before. The hunters were detained for a few days by the photographer and were in a state of constant fear that they were being held captive to be sacrificed later. The anthropologist was detective, curator and captor.

The introduction to a 2007 edition of The People of India, written by British author and scholar Hugh Rayner states, “Though somewhat flawed by the Imperial and racial preconceptions of the time; [The People of India] still offers a fascinating glimpse of India as it was in the mid-nineteenth century; documenting the costume of many of the ethnic, caste and tribal groupings, which have now disappeared, with the gradual modernisation and homogenisation of Indian and Pakistani society.” However, the authors of Photography in India counter that even in the moment when they were taken, Victorian ethnographic photographs were representations of an endangered past, on the brink of being changed with colonial modernity. These images were records created to be replaced. 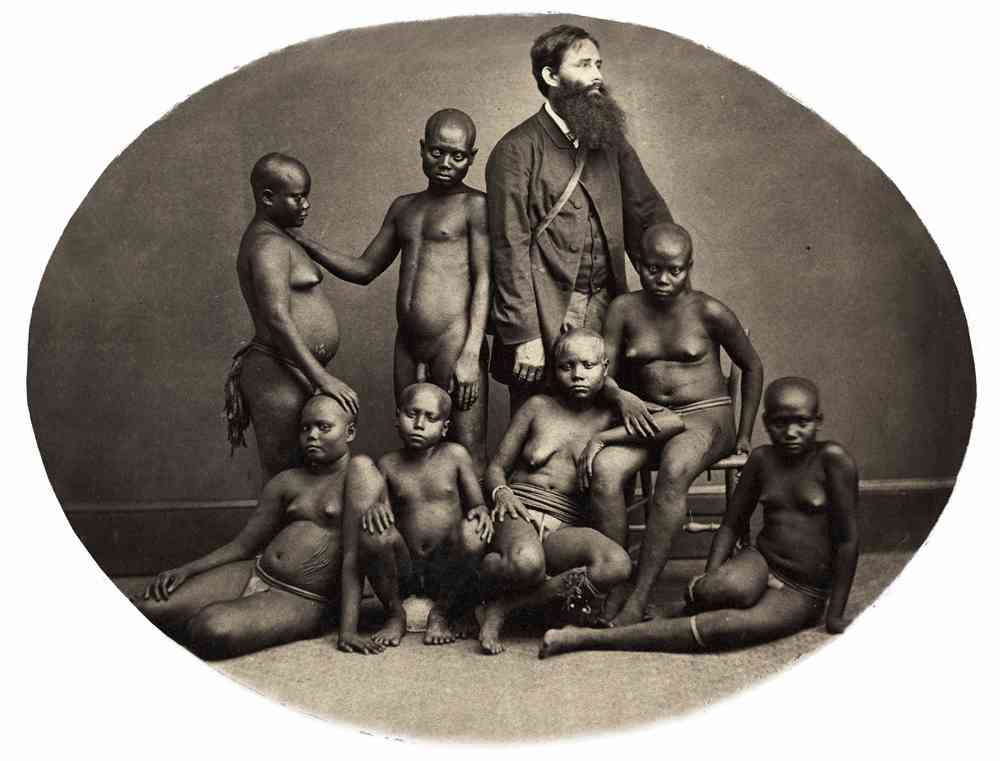 One of the more notorious colonial photographs of an Andamanese group with their “keeper” Mr. Homfray, taken in the famous John Edward Saché and W.F Westfield studio in Calcutta, depicts the extent of manipulation in these images. A note describing the studio session talks about how the Andamanese were made to strip for the photo and pose naked. The ethnographic study was trying to reaffirm the popular British colonial theory that the Andamanese were descendants of African slaves who settled in the island after a slave ship was shipwrecked there. Nudity in ethnographic photographs is controversial. Gujral says, “There was evidence that people in the Andamans had started to wear European clothes as there was a lot of Christian missionary activity in the region. Church missions would give white cotton garments to the natives they would ‘rehabilitate’. And you had photographers like Dobson of the Royal Anthropological Institute saying that native women would strip for the photographs on purpose. This would never happen in places like Bombay. There’s a correlation between how ‘ethnographic’ photos get based on how far away from local elitism they were taken. The further down you were in the caste hierarchy or removed from centres of power, the less exposure you had yourself to any sort of authority, the more likely you were to be the subject of an ethnographic photo.” 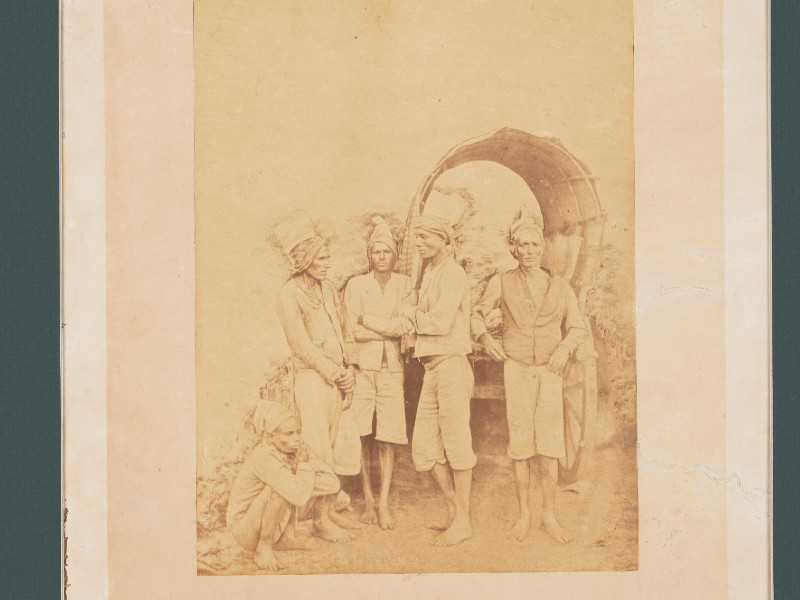 Coonbies (Roman Catholics of Salsette), from ‘Oriental Races and Tribes’, by William Johnson, 1863

Someone who made an effort to provide context to this kind of portraiture was William Johnson, one of the founding members of the Bombay Photographic Society. He is credited with producing the first ever Indian ethnographic album, The Oriental Races and Tribes, Residents and Visitors of Bombay in 1863 and 68. The album is a work of art, using innovations such as the montage, and even layering an image sourced from one of the only non-white members of the Society, Indian photographer Narayan Dajee. “What I find interesting about the Oriental Races and Tribes album is how rich it is in information. There are figures photographed in the studio but against detailed backgrounds with trees and monuments, temple facades and Roman columns,” says Gujral. 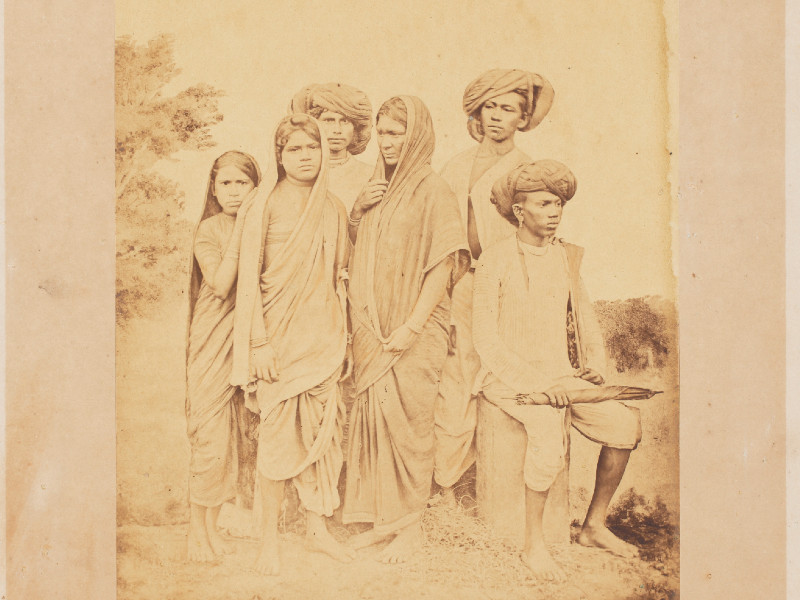 Mangs, from ‘Oriental Races and Tribes’, by William Johnson, 1863

Oriental Races… had the advantage of coming before the 1880s, when anthropologists started to create more rigorously standardised images. By specifying focal lengths, backgrounds, poses and such, anthropologists sought to cut out the ‘distractions’ of culture, context and facial expressions. Ultimately, it was the medium itself that proved excess visual detail could never be fully excised – it was impossible to categorise people in ‘strictly scientific’, read non-human, way. Anthropologist Deborah Poole writes that even in studio settings, where poses, frames and measurements were imposed, the act of taking the photograph itself affected gaze and expression. Photography could not live up to the brutal ambitions of the empirical ethnographic project. In fact, Elizabeth Edwards, who studied Huxley’s work, remarks that the colonial office’s archive of racial photographs contained more pictures of buildings than races. Brick and mortar is more easily categorised than skin and bone. 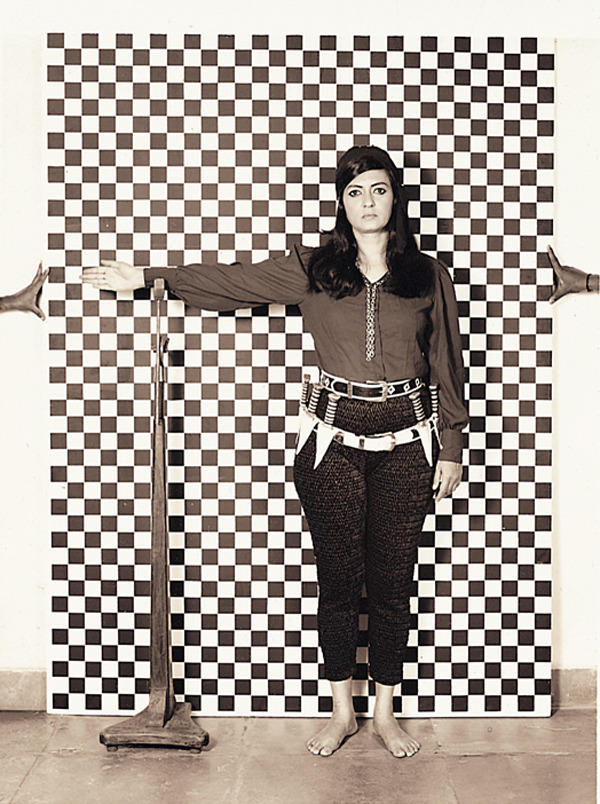 From The Ethnographic Series, part of ‘Native Women of South India: Manners and Customs’, 2000-2004, by Pushpamala N in collaboration with Clare Arni–click for source

Ethnographic photographs failed to approximate an ‘Indian type’, but their very failure marks them as poignant today. More than a century later, these images are referenced by contemporary photographers who grapple anew with the question of Indian identity. As a post-colonial nation, India has gone through a generational reckoning of its past in the ‘90s and early 2000s. Within conceptual video and photo artist Pushpamala N’s self-portrait series with Clare Arni, called Native Women of South India: Manners and Customs, are 45 photographs that respond to the disturbing images of Andaman’s natives made by Maurice Vidal Portman. Pushpamala poses against the same black and white grid as Portnam used. Her face is darkened and rests between the prongs of a cephalometre, a device used to measure the dimensions of the head. In one photo, we see her dressed like a member of the Toda tribe with her arm resting on another scale. 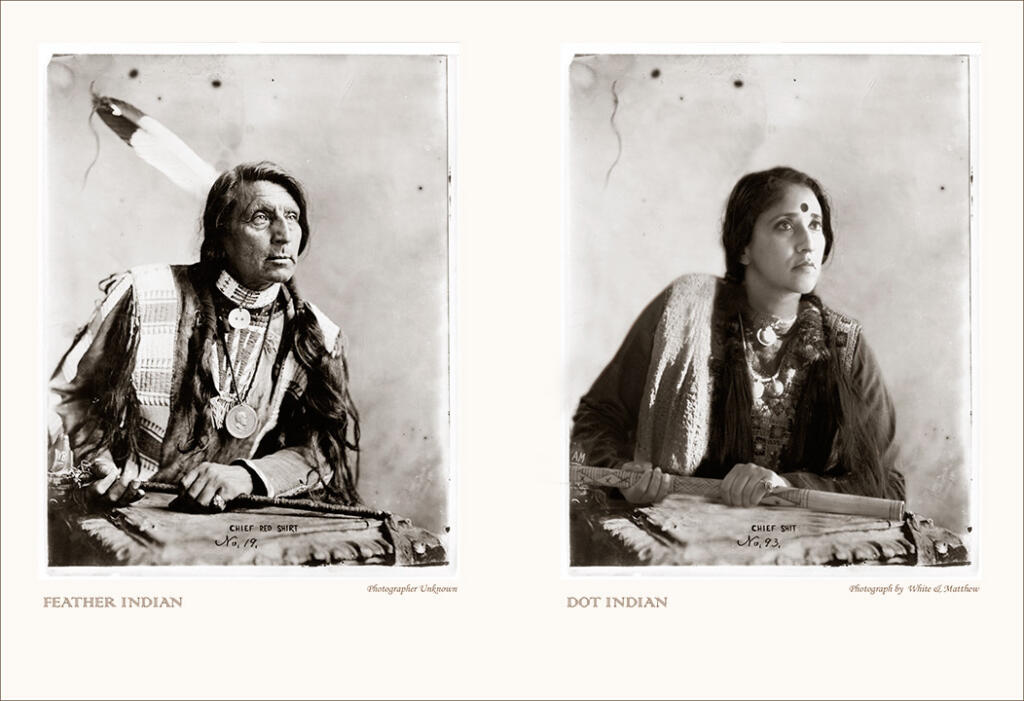 Similarly, artist Annu Palakunnathu Matthew uses the norms of the ethnographic genre to comment on another legacy of colonial erasure, ie the branding of Native Americans by Christopher Columbus as ‘Indians’. The Indian from India project draws parallels between the 19th-century ethnographic photos of Native Americans and their namesakes in South Asia, represented by Palakunnathu Matthew herself. Both she and Pushpamala N have subverted the power dynamic of colonial photography by playing the roles of the photographer and model. They address the violence of the ethnographic portrait but rewrite the narrative by placing themselves in the centre of it.

On the other hand, the artists of Raqs Media Collective suggest that ethnographic photographs shouldn’t be taken seriously in the first place. An Afternoon Unregistered on the Richter Scale is a silent, looped video projection of a photograph of a surveying room in Calcutta, originally taken by one James Waterhouse in 1911. By adding light, shadow and animating movement, the artists somehow manage to deepen the stillness of the photo and give it a soporific quality. In their description of the work they noted, “The surveying department is unhinged from empire and annexed to the commonwealth of dreams.”

Now that the results of the great British ethnographic projects are little more than a colonial era relic, are we finally free to see ourselves represented truly and fully in photographs? It depends on who you ask. The idea of Indianness we receive from mainstream media and pop culture is still influenced by Euro-centric notions of beauty—light-skinned, slender-hipped, tall. The true diversity of physiques, skin tones, features and hair textures that our country boasts is rarely documented, let alone celebrated. Starting 2019, the People’s Archive of Rural India is attempting to do that through a crowd-sourced photo directory project called Faces.

Despite the problematic nature of ethnographic projects, something about them clearly still compels us. In the ’90s, the Anthropological Survey of India flagged off its own People of India project. The goal, as author and professor of political science Laura Dudley Jenkins notes, was to profile the communities of India. But since our communities are largely defined in terms of caste, this project too went on to reinforce stereotypes like its predecessor and 19th-century namesake. Though the project boasted a by-Indian-for-Indians approach, it proved that these kinds of efforts trace not lines drawn in the sand but fissures. The power is still wielded by the person with the camera.

“I am interested in what changes when you are in possession of a tool to record yourself, and how much that can help with producing and disseminating memories and, consequently, history. Since my family got the camera, we’ve been able to document our history. Before that, it’s almost as if we didn’t exist. Access to the simple things makes such a difference in how your history is told. Access to reading and writing means you can write your own books, even if they’re just cookbooks, and access to a camera means that you can show your story, dictate the terms of your visual representation.”

So let’s return to the question we started with: Who is an Indian? The most interesting answers are being attempted today by the subject of the portraits, those with literal skin in the game. The combination of the front-facing camera and social media have together given 760 million Indians the opportunity to use portraiture to respond to their oppression, rather than the gaze of the oppressor. Multi-media artist, author and curator Rajyashree Goody whose work focuses on “instances of everyday power and resistance within Dalit communities in India” sees herself as an ethnographer. As a Dalit herself, her perspective is not that of an outsider looking for a spetacle, but of a chronicler wholly invested in the story being told. And that makes all the difference.

Photography in India by Nathaniel Gaskell and Diva Gujral

Photography and Anthropology by Christopher Pinney

The People of India Volume I

An Excess of Description: Ethnography, Race, and Visual Technologies by Deborah Poole