The following text was the curatorial note to our 2022 exhibition, Echoes of the Land – Art bears witness to a changing planet. The show was presented in collaboration with Ojas Art in Delhi from 3-20 November and showcased the work of 20 artists from the Sarmaya collection.

Rhinos and bears. The oldest paintings in India are of wild animals. They are etched on the sandstone slopes of Bhimbetka’s prehistoric rock shelters. These Stone Age figures speak of an abiding human fascination with the natural world, as well as the equally human compulsion to draw all about it.

When an artist imitates a natural form, they’re capturing something fleeting. A split-second of sunlight hitting still water, muscles tensing under skin, breeze rippling through grass. Even while being perceived, the vision has become extinct. Making the art poignant and filling the beholder with a yearning to seek their own moment of serendipity out in the wild.

This yearning has acquired a sharper urgency in the current epoch of the Anthropocene, the age shaped by man. As our greed and hubris destroys precious ecologies around the world, art has turned advocate for an endangered planet. Nourished for millennia by the infinite variety of nature and its boundless capacity for renewal, artists urge us now to listen, while we still can, to the fading echoes of Earth.

From the ‘Transport’ series by Mayank Shyam from the Sarmaya collection

We can start where we are, by simply acknowledging our place with the republic of the wild. As Mayank Shyam does in his Transport series. Riding in our planes and trains in pursuit of kinder weather, we are not so different, he observes, from birds and fish following ancient migratory trails. 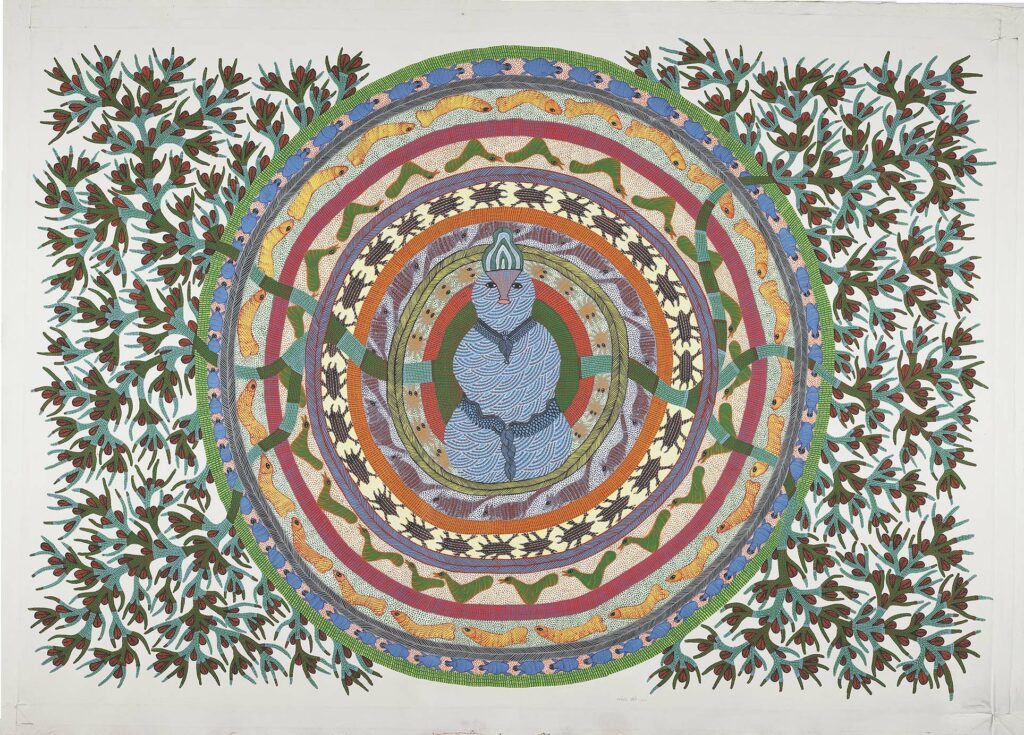 ‘Bada Dev’ by Ram Singh Urveti, 2019 from the Sarmaya collection

A worshipful gaze renders even the most commonplace interactions with nature as spiritual practice. Ram Singh Urveti sees the creator of all the world, Bada Dev, in the green sanctuary of a saja tree. Pradeepkumar KP regards with reverence a river flowing through the forests of Kerala. Its tranquil progress is a balm, a mirage in a land still wracked by memories of floods. 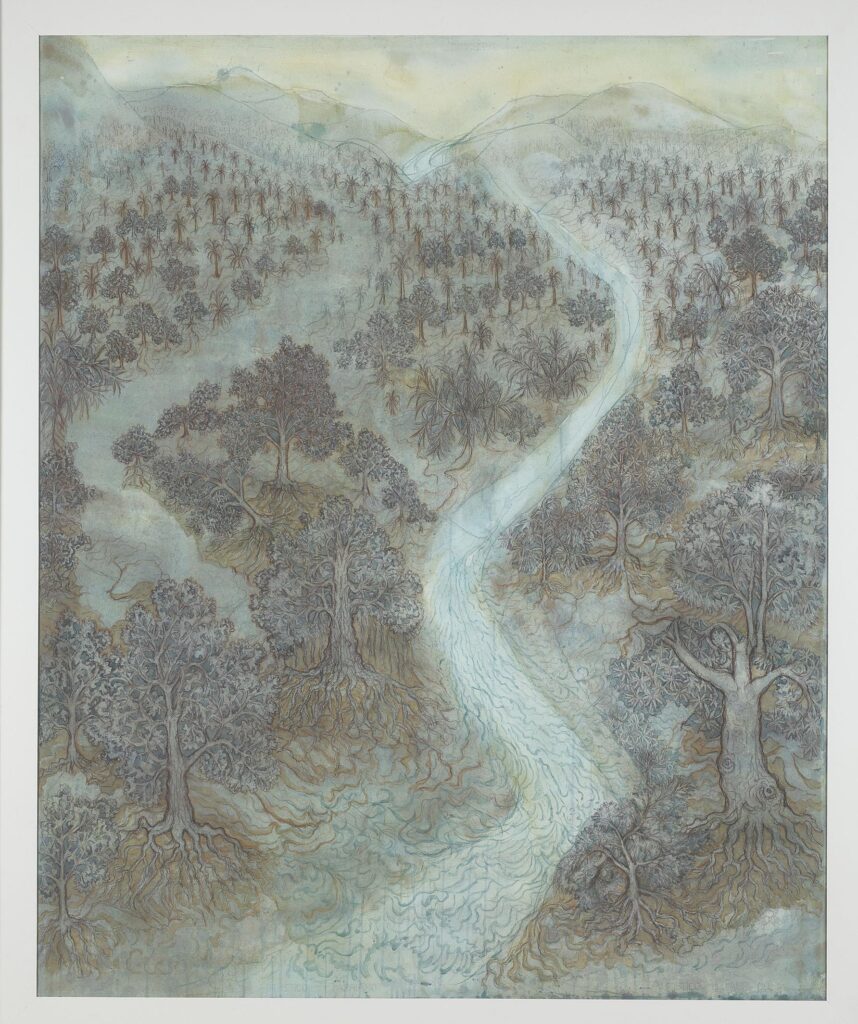 ‘Delhi III’ by Zarina Hashmi, 2000, from the Sarmaya collection

Deadly as nature’s fury can be, its silence is far more chilling. Art gives voice to the nameless dread that seizes us at the sight of a great river reduced to a trickle, as with Zarina Hashmi’s Yamuna. In Sumit Chitara’s imagining of a bountiful Sabarmati flowing through the heart of Ahmedabad, we’re shown what once was and will never now be. 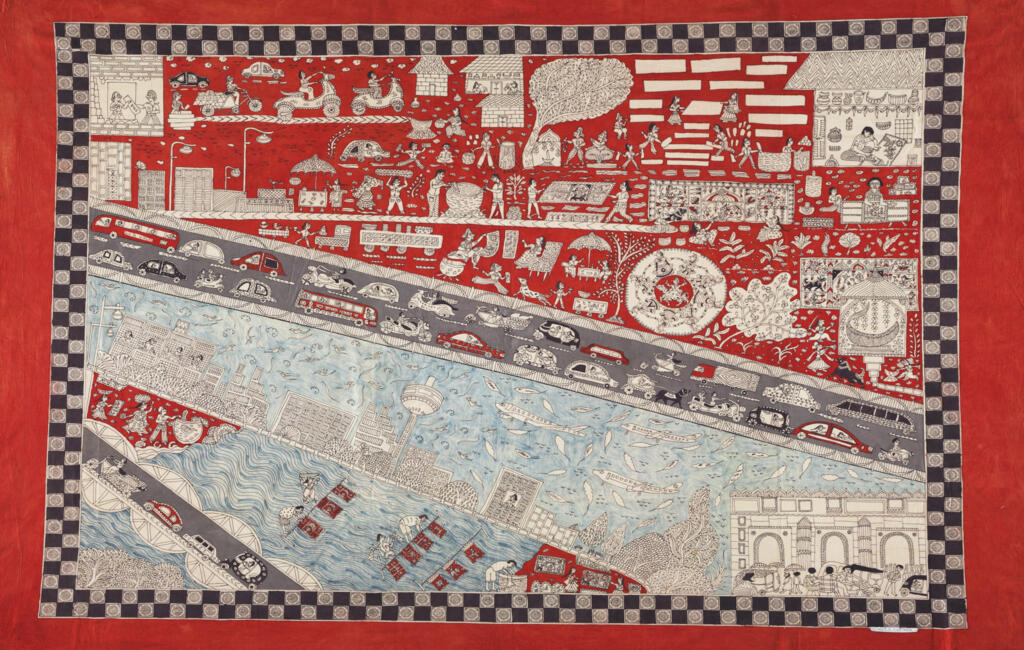 ‘Patang’ by Sumit Chitara, 2019, from the Sarmaya collection 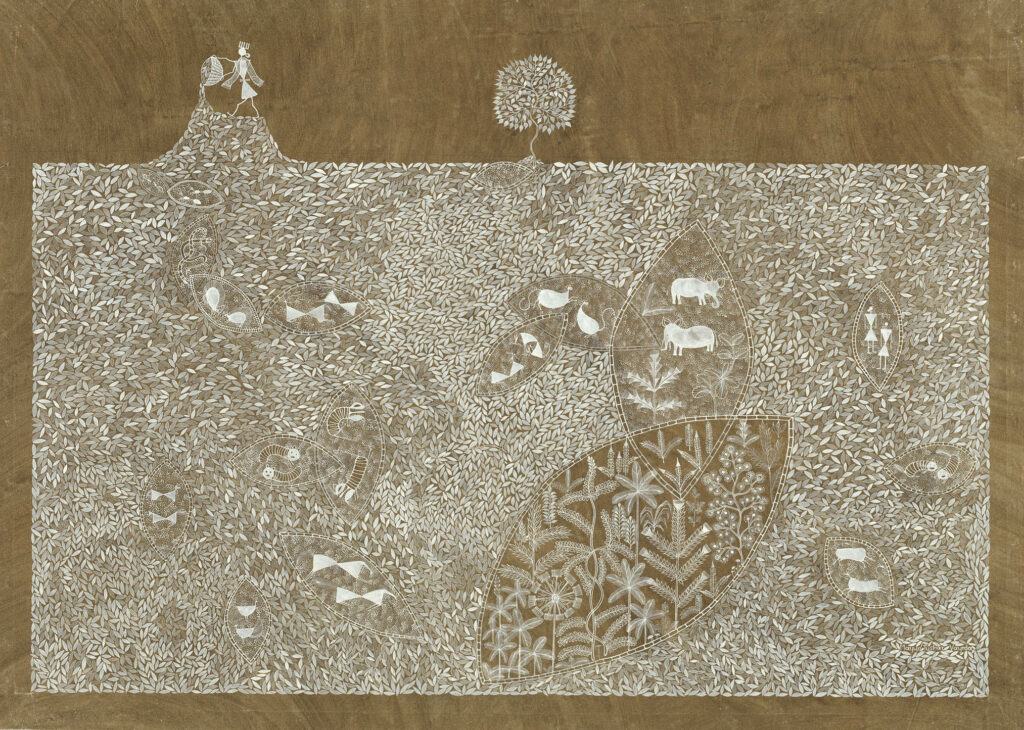 A return to innocence is not possible, but new paths to redemption can be imagined. Tushar and Mayur Vayeda plant kernels of hope by invoking the Warli goddess of fertility, Kansari. Like the seed she scatters, we too must strike roots once again in the soil. Come spring, green shoots will cover our careless tracks and any evidence at all that we once lived, promises Gopa Trivedi. Uncaring of human plans, nature will endure.

Untitled by Gopa Trivedi, gouache and silver foil on wasli from the Sarmaya collection

Then, if we’ve been listening to its echoes, we may get the chance to forge a different, more equal equation with the earth. One of gratitude, respect and grace. And a touch of that simple awe, which still radiates from a 30,000-year-old drawing of a rhino.