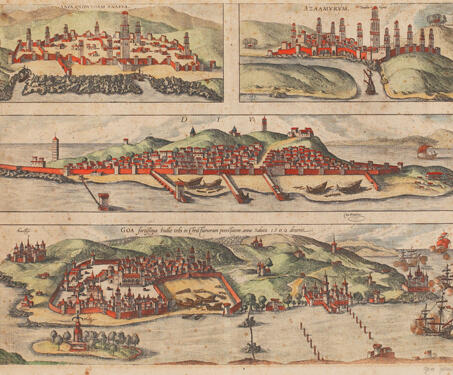 In the early history of map-making, the representation of cities was mostly done as sketches that were part of book illustrations or primarily bird’s-eye views. This composite view is part of Georg Braun and Frans Hogenberg’s, the Civitates Orbis Terrarum. The first volume of this landmark atlas was published in 1572, and its final volume… Read more »

This is a mid-17th-century travelogue by historian Thomas Herbert, who chronicles his journey to the Middle- East, Asia and Africa with particular emphasis on the empires of Persia and India during the 17th century. Thomas Herbert (1606-1682) was a courtier to Charles I (1600-1649). He travelled to the court of Shah Abbas (1571-1629) of Persia… Read more »