Sarmaya’s Christ Commission is special for more than one reason. It represents years of collaboration between the founder Paul Abraham and artist Manish Soni and a coming together of art and history, tradition and contemporary thought, and western narratives and eastern aesthetics. As an articulate member of the ancient Kerala community of Knanayas, an antiquarian and a prolific art collector and patron, Abraham was able to give Soni a firm grounding in both the history of Christianity in India and the visual vocabulary of the Bible. For his part, Soni brought to the table a sensibility steeped in Indian art traditions. His grandfather, Badrilal Chitrakar, was an award-winning master craftsman, art restorer and painter. Soni practices his craft of miniature paintings in the Pahadi and Rajasthani styles from his family home in Bhilwara, and his work has travelled to galleries around the world.

For the Christ Commission, Soni drew from the Hamzanama tradition of miniature art. This was a form originally created for the entertainment of the Mughal Emperor Akbar and told of the fictional exploits of Amir Hamza, one of Prophet Mohammed’s uncles. These paintings have a distinctive look, one that combines Indian and Persian influences and features iridescent colours and intricate detailing. As Abraham puts it, “I thought it would be fascinating to have someone interpret jointly with me a theme that is close to my heart—the theme of Jesus—but to humanise him and make him eastern in the interpretation. And use the hamzanama style, which tells a fascinating story of its time.”

The Christ Commission is an ongoing Sarmaya project and will have 12 paintings in all. Here we unveil the first batch of four, featuring key events in Jesus Christ’s life. These are coupled with excerpts from the many conversations between Abraham and Soni that coloured in the details of these works. 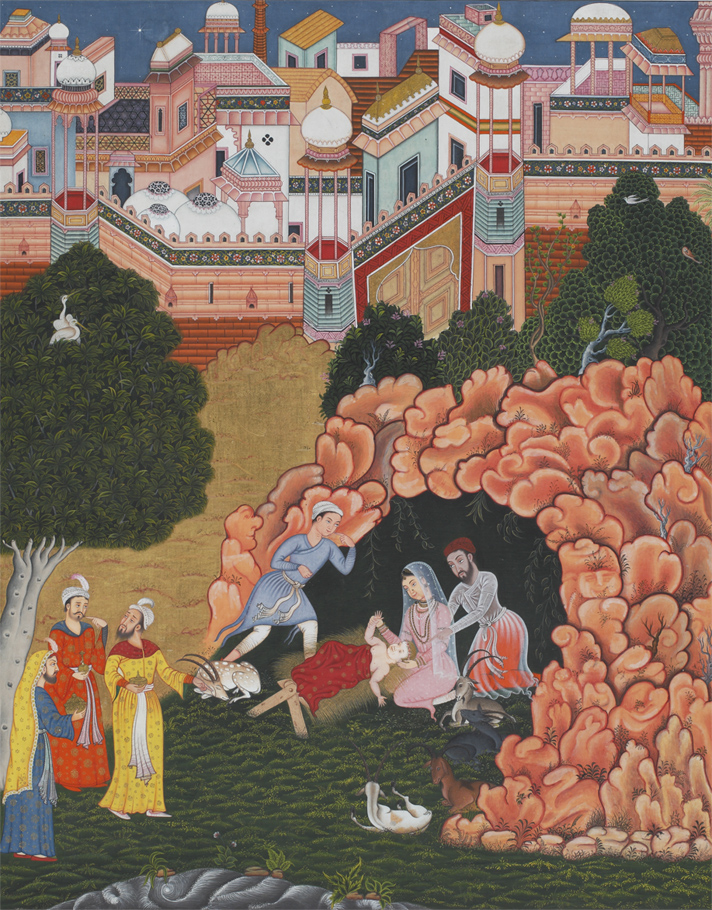 The Birth of Christ

Manish Soni: Did Mother Mary know from childhood that her son was special?

Paul Abraham: Tradition has it that the Archangel Gabriel came to Mary and said that you have been chosen to bear a child who will be a spiritual leader of great magnitude. And she accepted that role with humility. Both Mary and Joseph were very simple people. Joseph was a carpenter; their circumstances were simple. They had a lot of faith and were ready to accept a role given to them without arguing, questioning and rejecting. And if Jesus was born in that context, he couldn’t have been a complex person. He would have been simple. 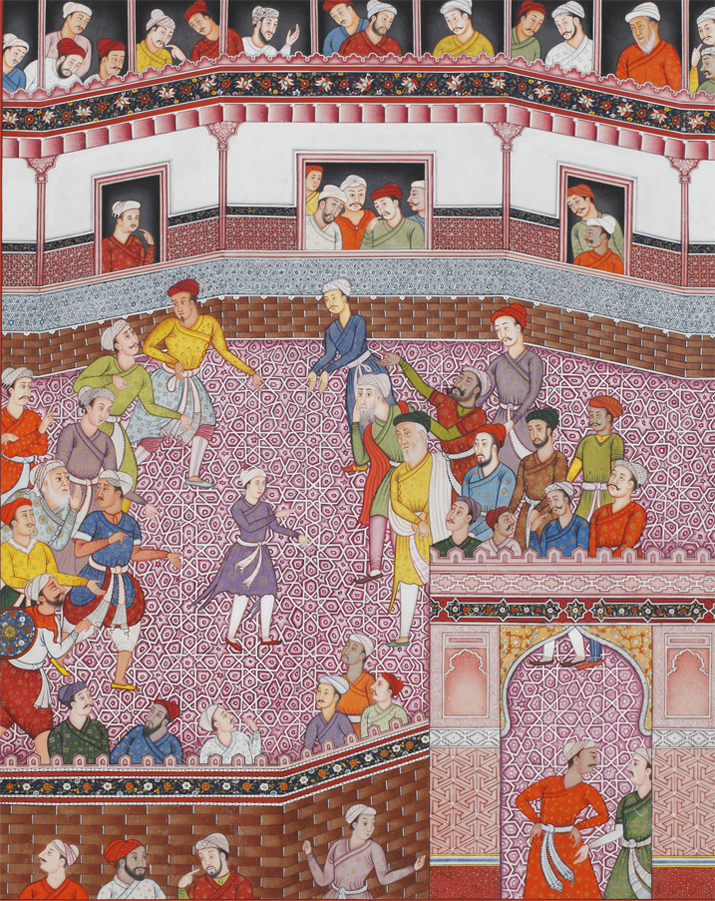 Jesus at the Temple

PA: There were three or four distinct phases in Jesus’s life [as documented in the Bible]. The birth, of course, is documented in some detail in the new testament—it talks about herod being the king, people returning to their villages from the census, the three kings from the Orient, etc. Then there are periodic references to a child who is like any other child. And then suddenly there is a shift in terms of this episode where he goes to the temple and he is arguing with the priests about a theological position. It’s the first time you get a sense of him taking a position on certain issues. Then he disappears from public sight and returns when he’s 30. 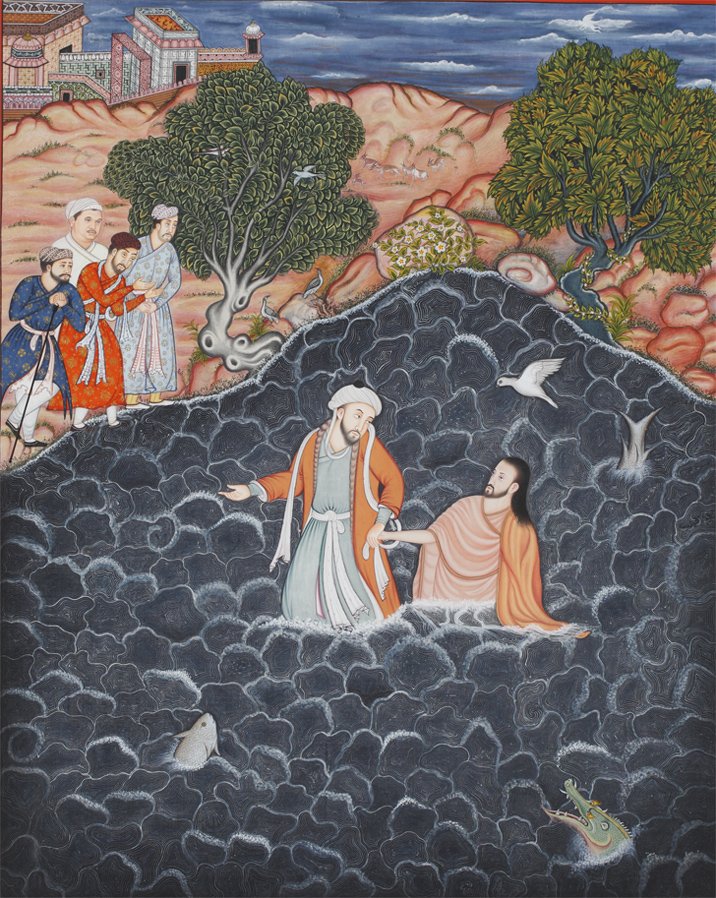 The Baptism of Christ

MS: Baptism is part of the Christian faith and Christianity came after Christ, after his crucifixion. So how did this baptism happen at the age of 30?

PA: This depiction of a ‘baptism’ by John the Baptist—a title he got later, because of this event—I don’t think it was a function to make Jesus a Christian…The whole event to my mind was some kind of an induction into the community that Jesus was part of at the time. 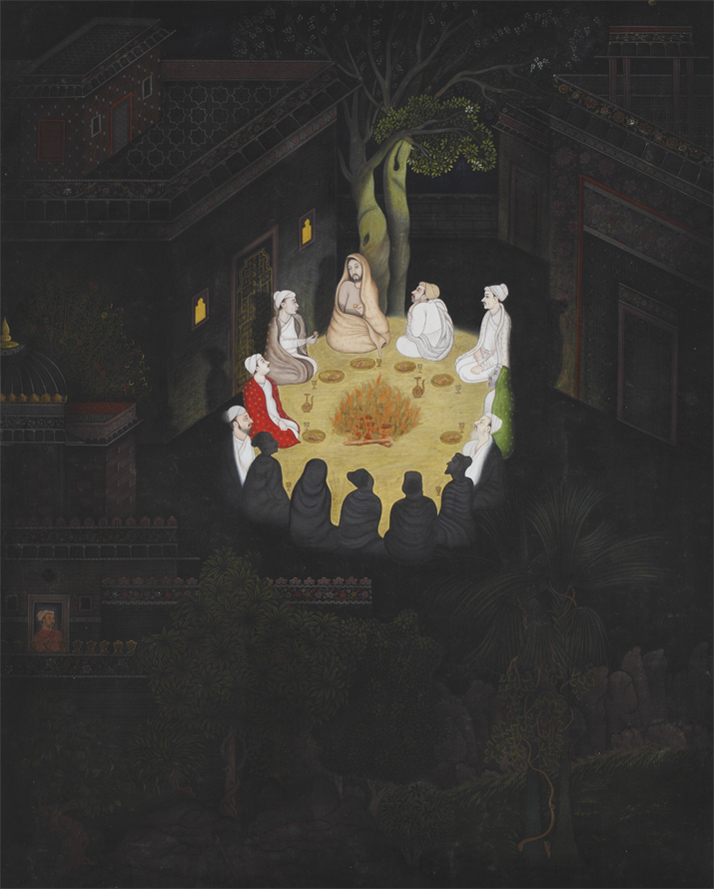 PA: [We want to show] the supper but change the perspective from the grand depiction of Da Vinci to [something] more intimate. How would you have a meal in a village? You would go to somebody’s house, sit together and eat. There wouldn’t be a big song and dance about it, especially if it was a moment of seriousness and intensity.

MS: I researched The Last Supper and I wasn’t very moved by [da Vinci’s painting]…

PA: It so happened that developments took over soon after in such a way that [the apostles] couldn’t ever get together [again] for a meal and that’s why it was called the last supper—the dinner per se got elevated to a very symbolic representation of a moment. But I think the real moment would have been just a gathering of people to discuss something important. That’s the mood to capture. A tense mood [that indicates] some important event, of which you have a premonition.

MS: In the painting, I have no animals or birds anywhere around. It’s lifeless, like all of nature knows that something is going to happen in a couple of days.