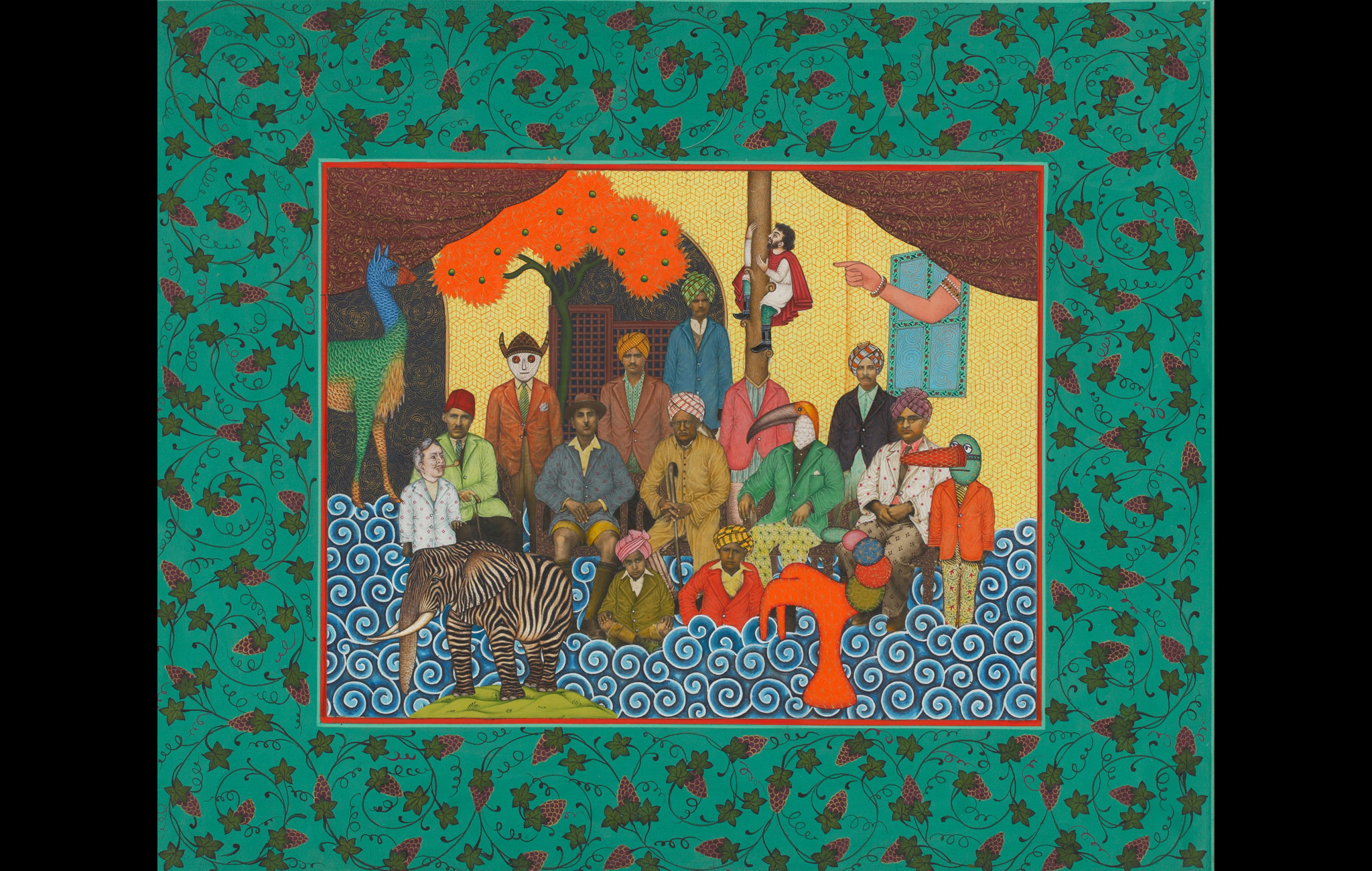 Quirky and humorous, ‘Gathering of a Family Farm’ is a typical example of the works of artist Alexander Gorlizki with Riyaz Uddin.

Here, the artists have painted over an unidentified family portrait in miniature style. They toy with and expand the ideas of painted photography and family portraiture. In the photograph, characters appear to be posing for a photograph; most of them are seated and directly gazing at the viewer. Incidentally, there is only one woman showcased. She is elderly and is smoking a pipe. The only ‘feminine’ aspect revealed by her is an oversized jewellery-clad arm sticking out of a window. While the bodies of the people photographed remain the same, their faces are painted over – the heads of different animals appearing in their place. Through these quirky placements, the artists showcase a blend of whimsy and transcendental life. Even the animals in the painting are disguised as other animals; the llama appears to be a peacock and the elephant a zebra. And yet these abnormalities make the humans appear strangely composed.

The painting makes use of a collage-like technique and at the same time betrays the art of graffiti – the photograph being the wall that the graffiti artists work on. British-born artist Alexander Gorlizki creates his own dream world with miniature master artist Riyaz Uddin. Together they paint over family portraits, borrowing from the tradition of painted photography, an art form prevalent in India during the 20th century. Miniature artists were requested to colour in the black and white photographs taken at the time.

Gorlizki brings in the ideas, drawing the composition of the painting, indicating where and how he wants his subjects in the photograph, and Uddin is the skilled hand that paints this composition using his jewel-coloured pigments with unbelievable intricacy. Gorlizki and Uddin work on each piece simultaneously by sending it back and forth for modifications, the process sometimes taking a year to be completed. Gorlizki completed his formal Fine Art education at Bristol Polytechnic, followed by an MFA in Sculpture from the Slade School in London. He currently lives and works in New York City. Heavily inspired by Indian miniature paintings and traditional Indian Mughal folios, he has reinterpreted these traditional art forms to create his own visual language. In the mid-1990’s Gorlizki decided to open up a studio in Jaipur, which is also when he began his collaboration with Uddin.

Gathering on a Family Farm

Pigment and Gold on handmade canvas