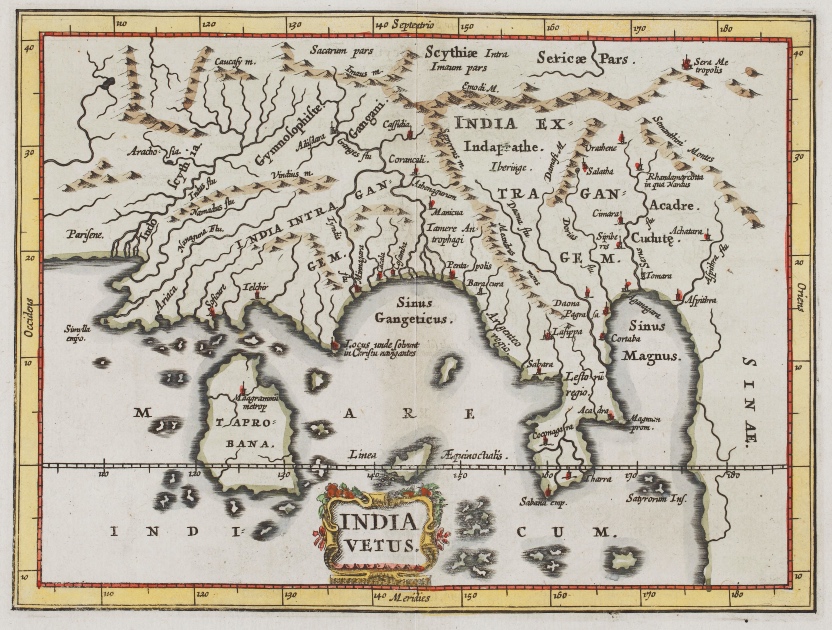 Ptolemaic map of South and Southeast Asia, 1670s. Miniature atlases like these were compiled and reprinted by geographer Philippus Cluverius in the 17th century

Where is it? How far away? What else is nearby? These are just a few common questions we ask before we begin a journey. These clues ease our path as we set off to navigate the unknown, whether it’s an unexplored neighbourhood in our hometown or a whole new country. For centuries, humans have attempted to reduce the risk of travel by familiarising ourselves with the lay of the land. Though modern technology has transformed the way we see the world, maps have for centuries been the starting point of all adventures, great and small.

The science of map-making is known as cartography, derived from the French ‘carta’ meaning card and the Greek ‘graphie’meaning to write or draw. Cartography is the discipline of depicting a geographic area on a flat surface. Maps are reservoirs of visual and artistic culture and help us comprehend how people of another time experienced their reality and defined their place in the world.

From the cosmograms of various theological systems to cartograms in an age of exploration, maps lay at the intersection of the arts and sciences.  Using maps from the Sarmaya collection, let’s have a look at how the boundaries and landmarks of the Indian subcontinent evolved in response to European economic and imperialist forays into the East.

Some science, some fiction 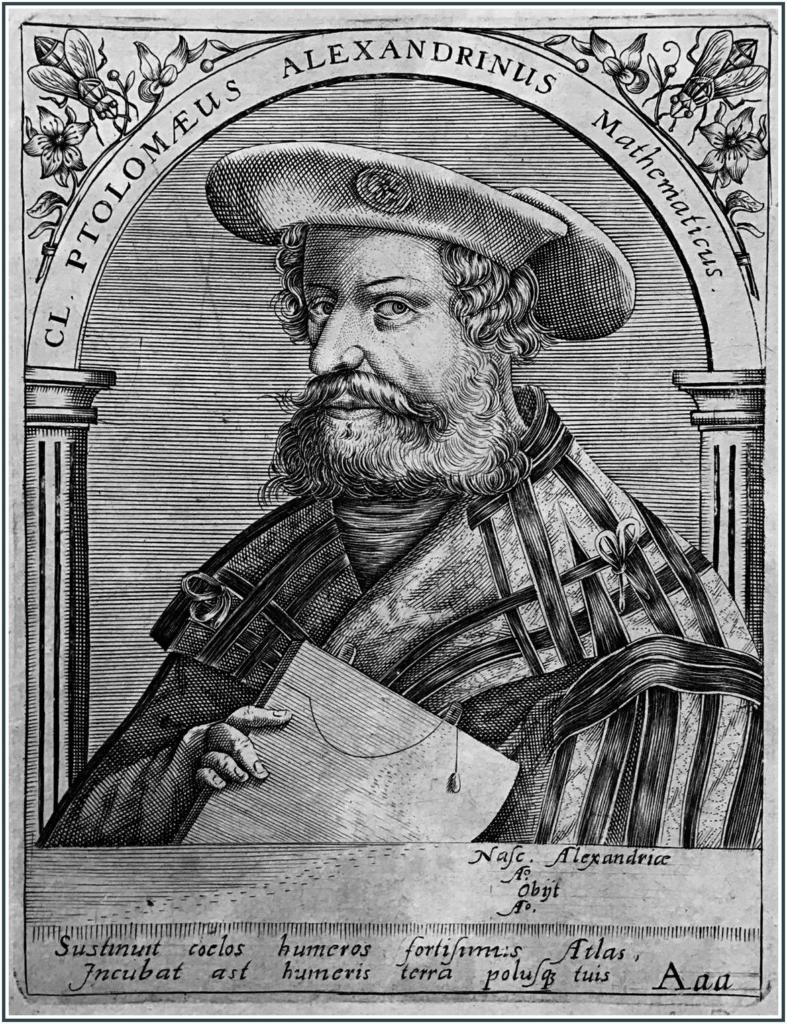 Claudius Ptolemy ‘the Alexandrian’, as depicted in a 16th-century engraving/Wikimedia Creative Commons

Cartography was a serious discipline in Europe, fuelled by merchants seeking new trade relations, as well as missionaries attempting to propagate Christianity far and wide. Claudius Ptolemy (c.90-168 CE) of Alexandria was an eminent Egyptian geographer and mathematician who first started documenting the position of places through their latitude and longitude. The astronomical observations contained in his 2nd Century CE book Geography influenced the earliest maps of the world. He produced a  topographical depiction of the Subcontinent around 150 CE, highlighting the numerous ports visited by Roman tradesmen. He believed that the Indian Ocean was a large inland sea encircled on its southern end by a massive landmass that worked to counterbalance the landmasses of the northern hemisphere. Despite the inaccuracies, Ptolemy’s Geography was the touchstone of the renaissance in European cartography till the 15th Century. 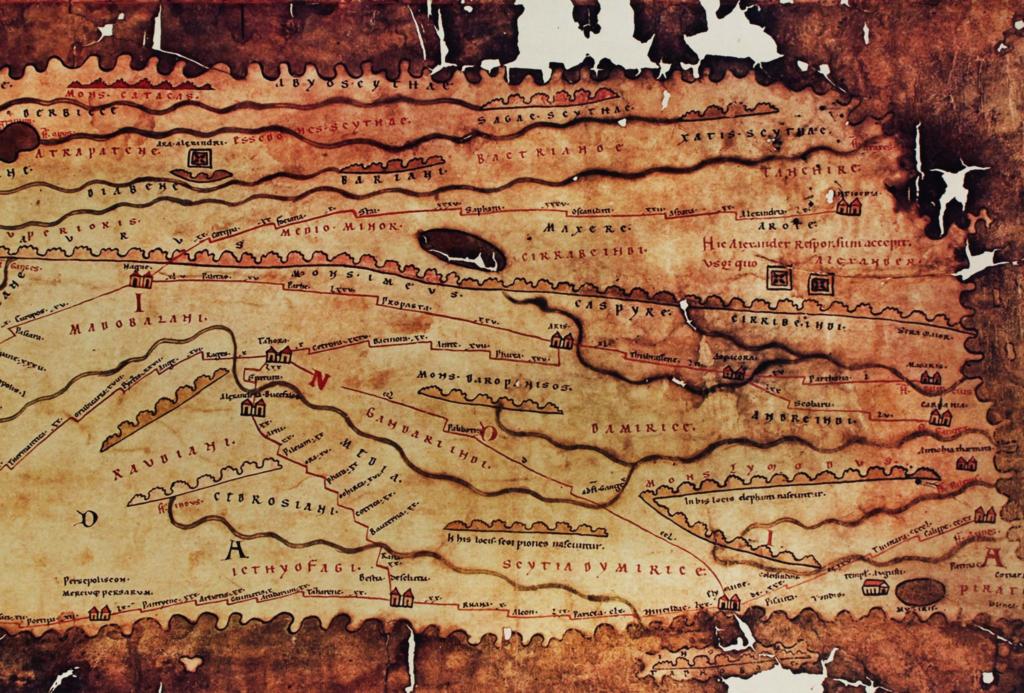 One of the earliest surviving representations of the Indian peninsula is in the Tabula Peutingeriana, a 12th Century version of a Roman map from the 4th Century CE detailing circuits through Europe, the Far East, and South Asia. It specifically represents the port of Muziris, one of India’s most prosperous trading hubs. During this early historical period, there were no means to know how far east or west one was travelling, as there were no dependable ways to calculate longitude. Many epic travels were conducted using a knowledge of wind and sea currents. Or, at times, pure guesswork.

Many early cartographers did not travel to the sites they rendered on paper. As a result, early maps were a mix of reality and fiction reported by travellers and traders. Cartographers used a combination of artistry, geography and reportage to fill in any blanks. Before the science of longitudes and latitudes caught up, stories quite literally shaped the world. One fascinating story is that of a lake seen in the map below. 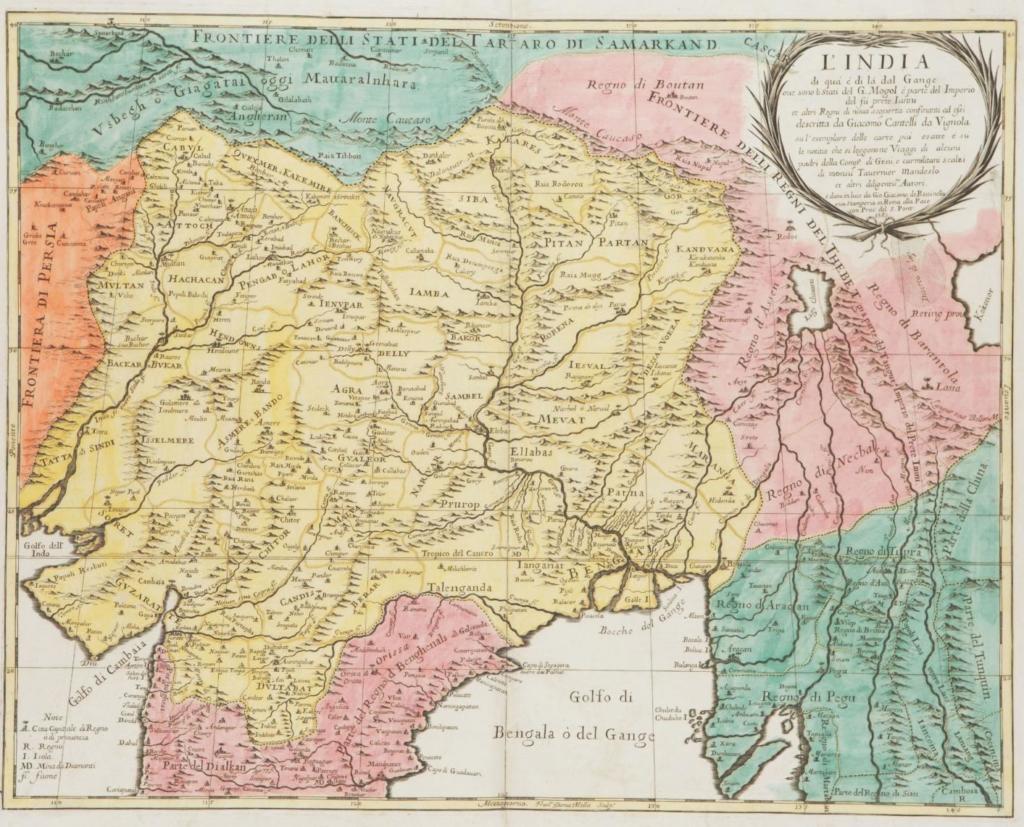 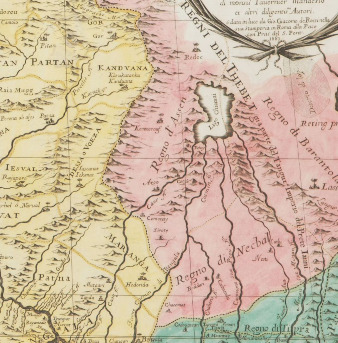 Detail of the Chiamay Lake and surrounding areas

Starting in the mid-1500s, a lake began to appear in maps of India. It was variously called Chiamay, Cunebete, Singapamor and Jamahey. It was believed to be the source of four great rivers of South East Asia, including the Brahmaputra. But Lake Chiamay was completely a product of speculative geography, where a dark or unknown area on a map was filled in by cartographers with fragments of local lore and travellers’ tales. This one stuck around for 200 years before it was proved beyond doubt that no such lake ever was and Chiamay slowly disappeared from world maps.

While a modest number of European explorers were able to visit the Subcontinent, little to no progress was made in terms of a geographical understanding of the region until the contact between Europe and South Asia was revitalised towards the end of 15th Century by a Portuguese explorer named Vasco da Gama.

Portugal enjoyed a virtual monopoly on trade with India by the 16th Century and they managed this by defending their stronghold on the Subcontinent’s directional and mercantile intelligence. This changed, however, with the arrival of new European powers such as the Dutch East India Company (VOC), the English East India Company (EIC), and the French. Maps began to play an increasingly important role in realising European nationalist and imperialist ambitions, both practically and ideologically. 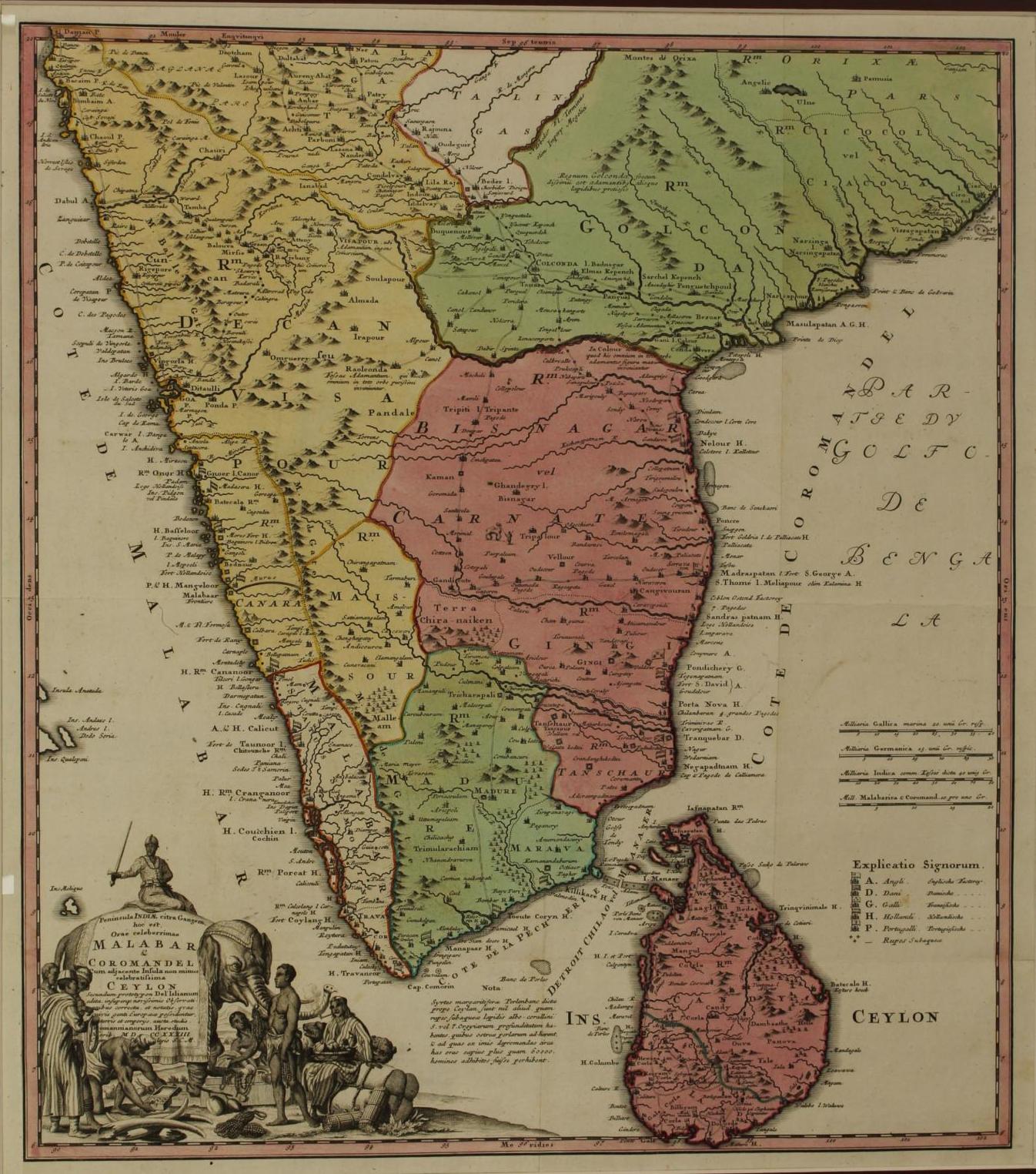 The peninsula of India on this side of the Ganges is the most famous coastline of Sumatra and Coromandel with the adjacent island, no less famous, Ceylon, 1733, by Homann Heirs. This Latin map above is an important historical record as it shows English, Dutch, French, Danish and Portuguese establishments in the Deccan in the early 1700s

The period between the late-16th and early-17th centuries is touted as the golden age of Dutch and Flemish cartography. Dutch dominion was on the rise and the mercantile empire was being built. Cartography attained new heights of complexity in small towns like Antwerp and Amsterdam thanks to the presence there of a vast network of merchants and business families. One of the best examples of this phenomenon is a company created by Johannes van Keulen (1654-1715) that functioned until 1885 and came to be known as Europe’s best map publisher and the official hydrographer for the Dutch East India Company. Hydrography is the science of measuring data about waterbodies.

During this early era, maps were decidedly port-centric. To the extent that some would present inland areas as featureless expanses so as not to distract from the main attraction. The Dutch East India Company developed a professional and well-organiszed hydrographic office that worked tirelessly to gather the most up-to-date information on navigation in the South and Southeast Asian waterways. These charts survived in manuscripts for some generations, allowing their knowledge to be transmitted in a limited way. However, by the mid-18th Century, it had become fiscally unfeasible to produce enough manuscript copies of these charts due to the increasing risk of human errors. As a result, it was decided that these charts could be printed and shared with certain restrictions 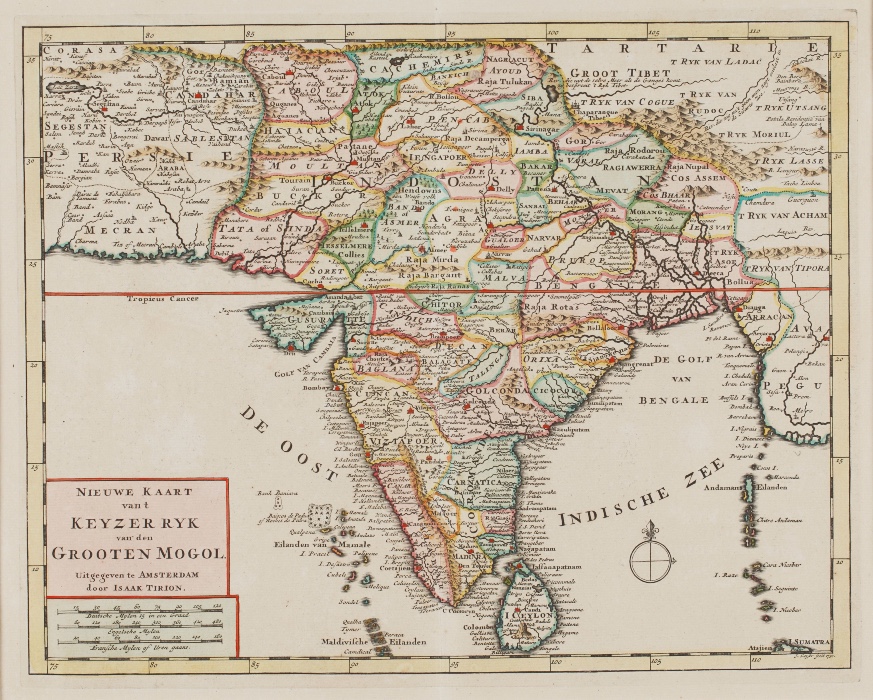 By the late-18th Century, the East India Company had mostly defeated or subdued other European competitors on the Indian subcontinent.  It was also a period where cartography played a critical role in enabling technical, commercial, administrative, military developments in India. While Indians were recruited to fight wars, they were also employed to conduct surveys of battle sites. In 1764, surveyors for the East India Company began an extensive assessment of river systems in the Ganges delta, just a few years after the Battle of Plassey (1757) paved the way for British dominion over the Indian subcontinent. The first survey maps created during this period greatly aided in finding the sources of lucrative commodities like indigo, saltpetre, opium and textiles. 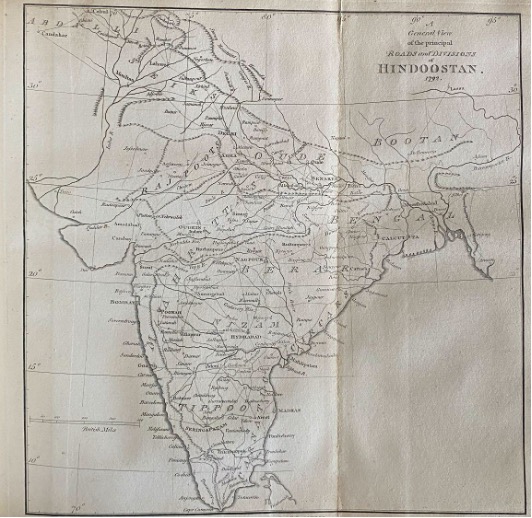 General view of the principal roads and divisions of Hindoostan, 1792, by James Rennell 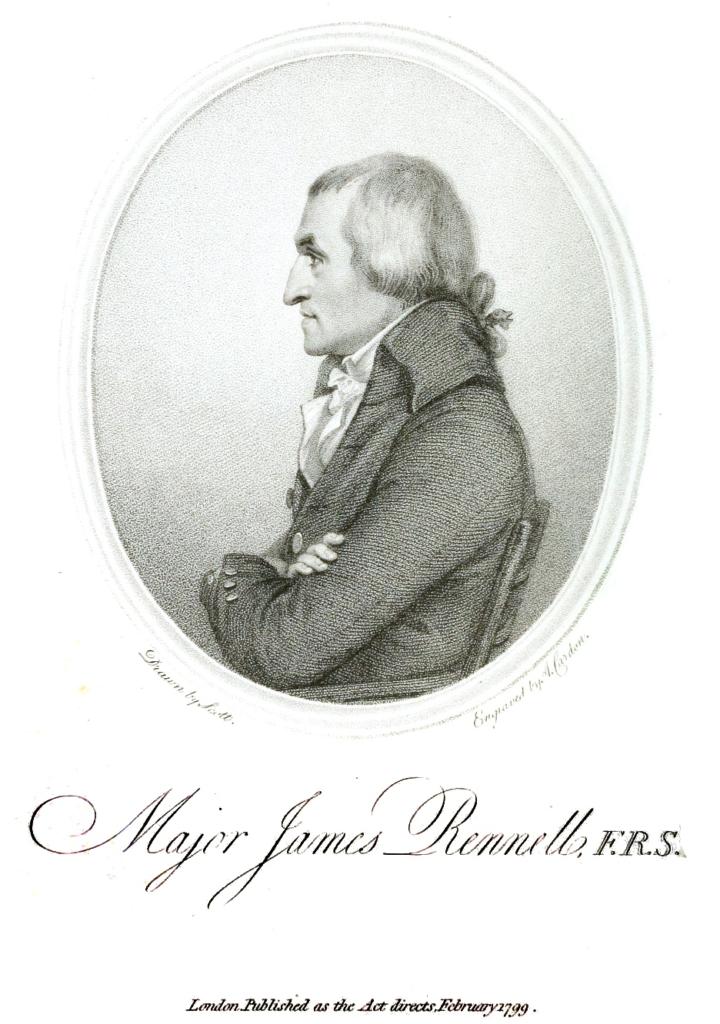 Surveyors like James Rennell (1742-1830) aka the ‘Father of Indian Survey’, James Horsburg (1762-1836), and others rose to prominence at this time, creating initial maps of Bengal and peninsular India. In 1767, the position of Surveyor General was created and Rennell was appointed in the role. He is credited with bringing a greater accuracy and a degree of standardisation to process. For instance, he taught the surveyors working under him to keep a consistent pace regardless of terrain. The rule of thumb was that one mile equalled 2,000 paces. Rennell utilised a procedure commonly known as the route survey, in which his crew measured base points, mainly the locations of towns, and then precisely calculated the distances between these base points along the road using chains and a surveyor’s wheel. When these observations were merged with observations of geographical features, a network of data was generated that was used to create an accurate general map. Over the course of thirteen years, Rennell and his crew mapped about 780,000 square kilometres of the Subcontinent’s terrain.

The 19th Century also marked the beginning of a scientific project called the Great Trigonometrical Survey of India (GTS), initiated by Willaim Lambton (1753-1823) a British infantry officer and surveyor. The goal of this survey was to use trigonometric calculations from the Greenwich base meridian, rather than astronomical observations, to draw latitude and longitude lines. The survey laid out a continuous set of triangles by which means the position of places could be determined without uncertainty. Unlike the Survey of India, the Trigonometrical Survey used scientific instruments such as the theodolite to create more precise maps. This optical tool was used to measure angles in the horizontal and vertical planes between selected points. 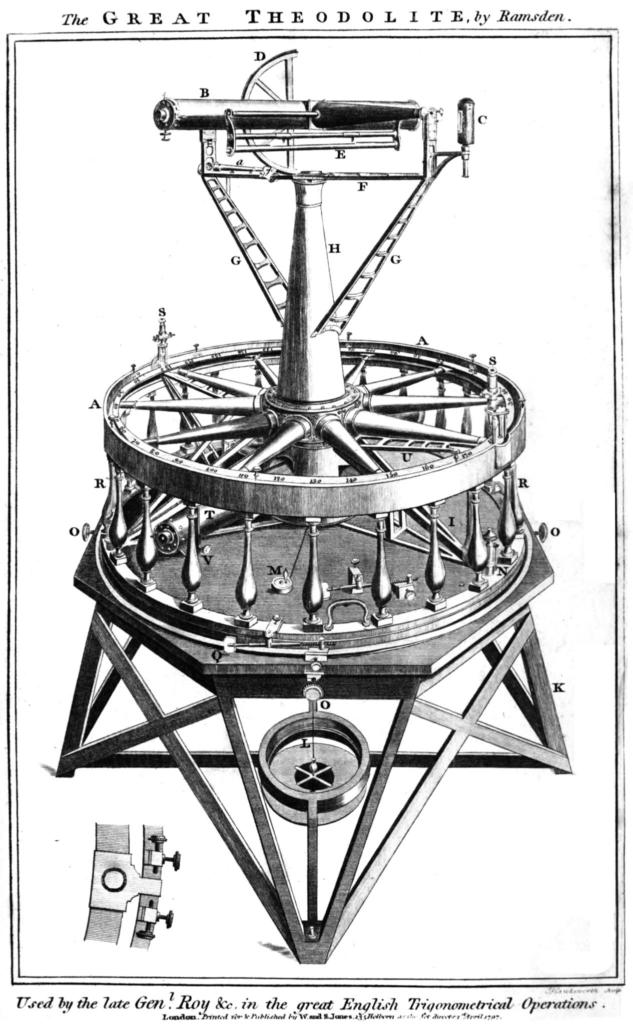 Great Theodolite by Jesse Ramsden, similar to the one made by William Cary that was used by Lambton in the early surveys/Wikimedia Creative Commons

By the late-19th Century, a significant number of maps were produced by the British administration to serve a variety of objectives from understanding the topography of the land to estimating revenue collected. Created in collaboration with other developing disciplines like botany, archaeology and geology, these maps began to present an increasingly vivid picture of the vast lands of the Indian subcontinent that fell under British rule. Early maps, like early photographs, present to us a pristine view of how certain European powers regarded India. As a possession, a trade hub, a curiosity. Foreign commerce, battles and other imperialist preoccupations take the foreground in these documents. And these are precisely the histories and narratives that are so tellingly captured within these fading borders.

Indian maps and plans: From earliest times to the advent of European surveys by Gole, S. (1989) New Delhi, Manohar Publications

Cosmology to cartography: A cultural journey of Indian maps from the collections of Kalakriti archives, Hyderabad and National Museum by Vivek Nanda, Alexander Johnson (2015)

(2014). Summary of Maps and Map-making in India · Online Exhibits