The last capital of independent Bengal, a city of splendour wrapped in glistening strands of the finest silk, home to the palace of a thousand doors. Murshidabad was a shining example of cosmopolitan glamour, a place where cultures mixed freely and trade thrived, business boomed. What happened to this hub of creative and commercial triumphs? How was it forgotten, why do its glories lie in decay? 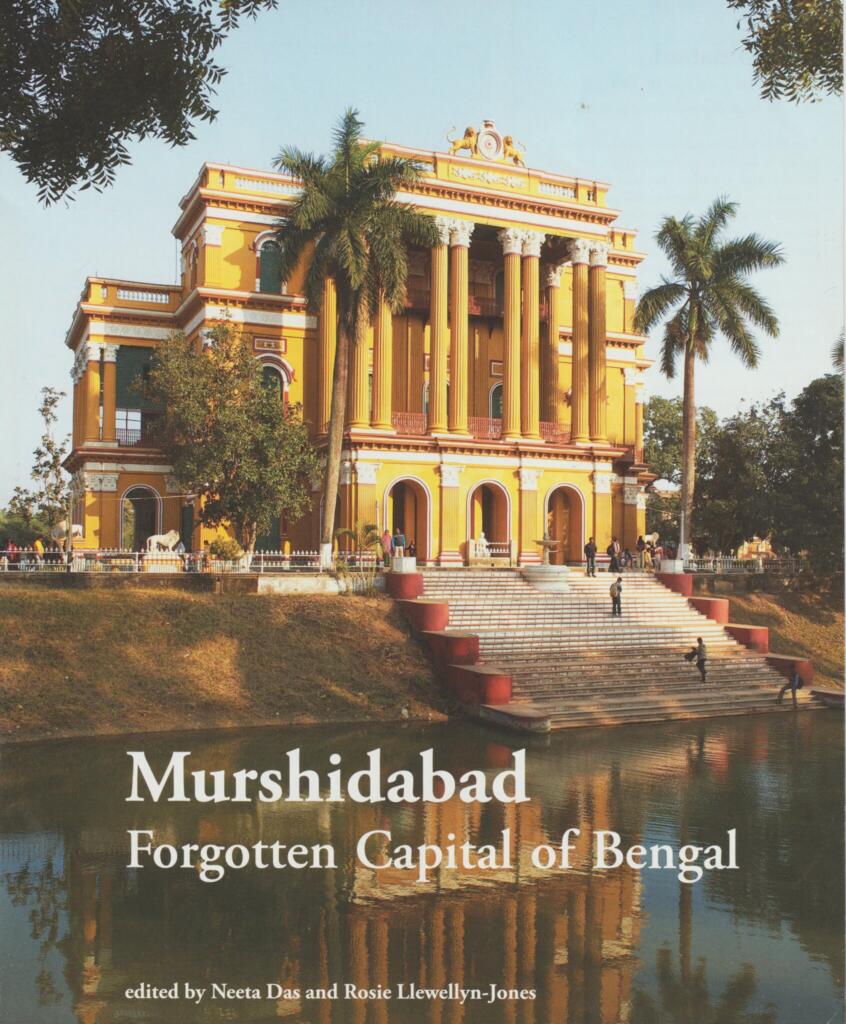 We asked renowned writer and historian Rosie Llewellyn-Jones, an expert in colonial Indian architecture and author of Murshidabad: Forgotten Capital of Bengal, to tell us more about this once-wondrous city that time left behind.

The story of Murshidabad is often eclipsed by the story of Siraj ud-Daulah and the Battle of Plassey, but could you give us some context about the significance of Murshidabad before the Bengal Presidency? What made it such an important city?

It’s a pity that the story of Siraj ud-Daulah has eclipsed that of Murshidabad’s brief moment of glory in the 18th century. Around 1703-4, the Diwan or Nawab Murshid Quli Khan decided to move the capital of Bengal from Dacca to Muxudabad, as it was then known. It became the administrative headquarters for the Mughal province of Bengal – the centre for revenue collection and the new home of the Nawab’s court. We have little information about the city before this, except that it was well situated on both sides of the river Bhagirathi on a high, flat plain. At that time, river travel was safer and quicker, as few decent roads existed. Patna could be reached by river, and the small British trading post of Calcutta lay to the south, so goods could be easily exported, including silk, for which the area was famous. 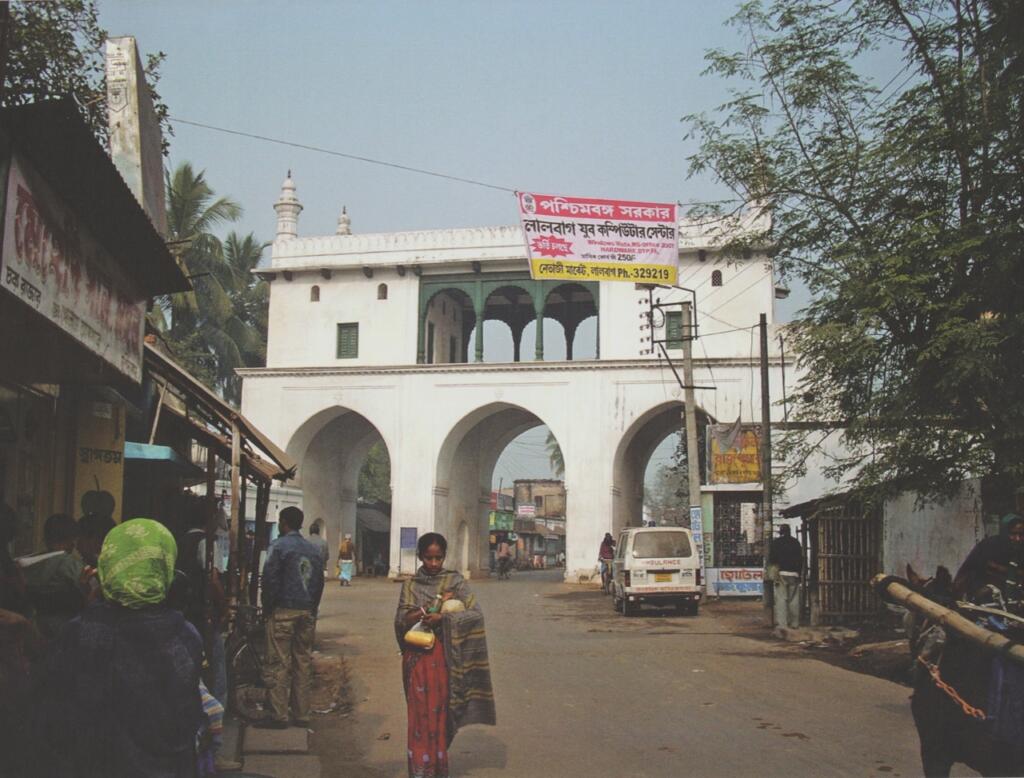 For over 100 years, the British presence in India was that of traders through the East India Company. Over the decades between 1704 and 1757, when Murshidabad became a prosperous city, the Company shifted focus to cementing its status as ruler. What led to this?

It is important to remember that the English Company was only one of several European trading companies. Its most serious rival was the French Compagnies des Indes and until 1761, when the English captured the French headquarters of Pondicherry in southern India, it was unclear which country, England or France, would win the trading rights from the Mughals and their deputies. Chandernagore was a French enclave and there was also Dutch Chinsurah and Danish Serampore, all on the river. So you have these European representatives fighting each other and jostling for trade and more interested at this time in making profits than ruling. It was only after the diwani of Bengal and Orissa was granted to the English Company in 1765, following its victory at Buxar the previous year, that things started to change. In order to maximize efficient revenue collection, you have to have an efficient administration. The British did what the Mughals had done before them, working through trusted Indian deputies. There did come a shift in ideology, but it was initially for pragmatic reasons.

What led to the decline of the city? Did the establishment of the Bengal Presidency obliterate the story of Murshidabad?

As I’ve related in the book Murshidabad, Forgotten Capital of Bengal, co-authored with my friend Dr Neeta Das, there was a disastrous famine in the late 1760s, following a poor monsoon.  There was a huge decline in the population during 1770-1780. Many people died from starvation, the British Resident reported bodies in the streets, and there was also an outbreak of smallpox. Silk production never recovered and land was left untilled, because there was no one left to farm it. Then there was a gradual shift in administrative functions from Murshidabad started by Warren Hastings who had been British Resident there for four years. Hastings transferred the revenue office and courts of civil and criminal justice to Calcutta, which he said ‘may now be considered the capital of Bengal’. It wasn’t the establishment of the Bengal Presidency so much as the growing importance of its capital, Calcutta.

The Nawabs of Murshidabad are not as well-known as their counterparts in Awadh and the Nizams in Hyderabad, although the kingdoms sprung up around the same time. Could you tell us why?

There seem to be two reasons. Both Awadh and Hyderabad did emerge as independent states at the same time as Murshidabad. Between 1717 and 1724 these three breakaway provinces were established as the Mughal Empire started to fall apart. Although all three Nawabs (deputies) still paid formal homage and initially some revenue to Delhi they had virtually made themselves independent. Both Awadh and Hyderabad remained independent longer than Murshidabad.  Awadh was annexed by the East India Company in 1856 and Hyderabad amazingly went on until 1948, a year after India’s independence. But Murshidabad was emasculated for the reasons mentioned above and thus had a shorter period of time to develop its own culture. After the 1760s it took second place to Calcutta and because you can’t have two capitals in one Bengal, its importance was downgraded and its history forgotten.

What, to your mind, is the reason for Awadh and Hyderabad having an identity that lasts into the 21st century while Murshidabad is largely forgotten?

There is another reason, apart from the ones I’ve mentioned already. Murshidabad enjoyed half a century as the independent capital of Bengal until the East India Company took over revenue collection duties. Although there are political reports in Company Records about Murshidabad before this date, there is very little on the culture of the city. Few European travellers visited it, apart from the Jesuit priest Joseph Tieffenthaler in 1765, so it never became a ‘tourist’ spot. It is unfortunate that Indian accounts of the city are few and far between.  Scholars who don’t read Persian or Urdu have to rely on translated histories like the Riyazu-s-Salatin (The Gardens of the Kings: A History of Bengal), written in 1788 by Ghulam Husain Salim. There are no chatty accounts from European travellers of the kind we get from Lucknow and Hyderabad during the late 18th and early 19th centuries. We simply don’t know what went on. So it is only from Murshidabad paintings and artefacts in the Hazarduari Palace that we can begin to recreate the city’s cultural life. 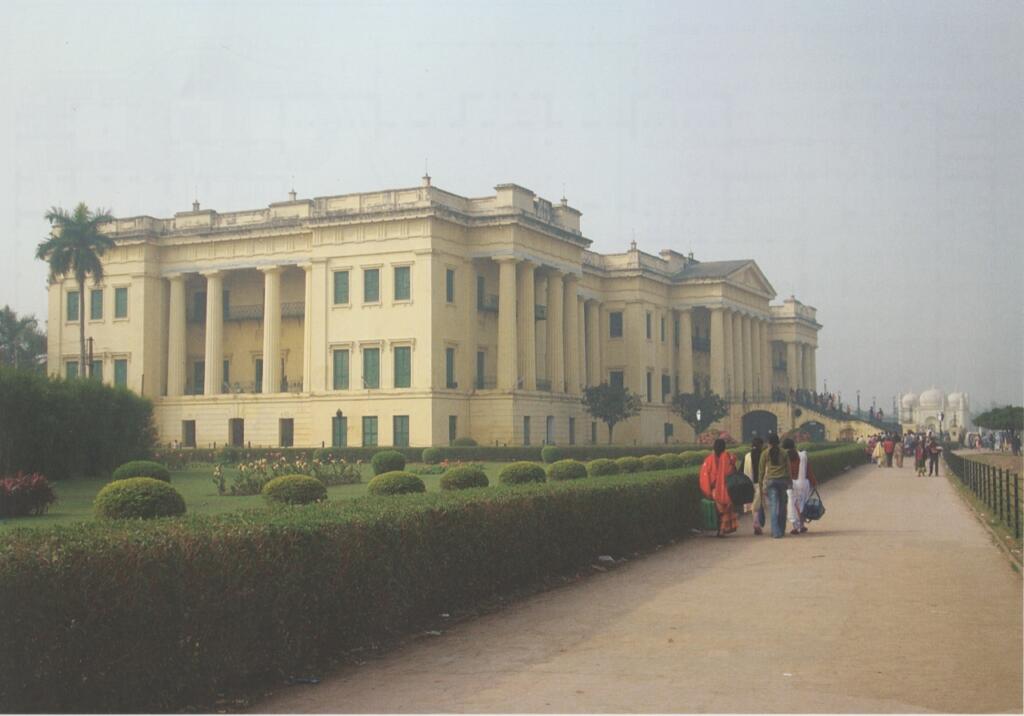 Murshidabad has a history of great buildings being built and subsequently demolished. What lead to this? And could you tell us about the history of the Chowk mosque and Hazarduari Palace?

It is clear that a large number of buildings were demolished or have been left to fall into ruin.  Not only palaces and residential buildings, but religious ones too, like the Futi Masjid. Luckily both the Chowk Masjid, also known as Munni Begam’s mosque, and the Hazaduari Palace still survive in good condition. It was inevitable as the city became depopulated that empty buildings would decay. A particularly sad case is the Eunuch’s House, a fine 18th century English-style building that could have been saved even five years ago. There is no heritage interest in these old buildings erected by the British. In some cases, old buildings have been looted for their bricks and it is not uncommon to see new buildings on a base of old lakhori brick. In others you find the original old building hidden behind a new one. Many Indian owners have moved to Kolkata and have no interest in Murshidabad’s old buildings, only the land they stand on. An earthquake in 1897 brought down some buildings too, which were not reconstructed. 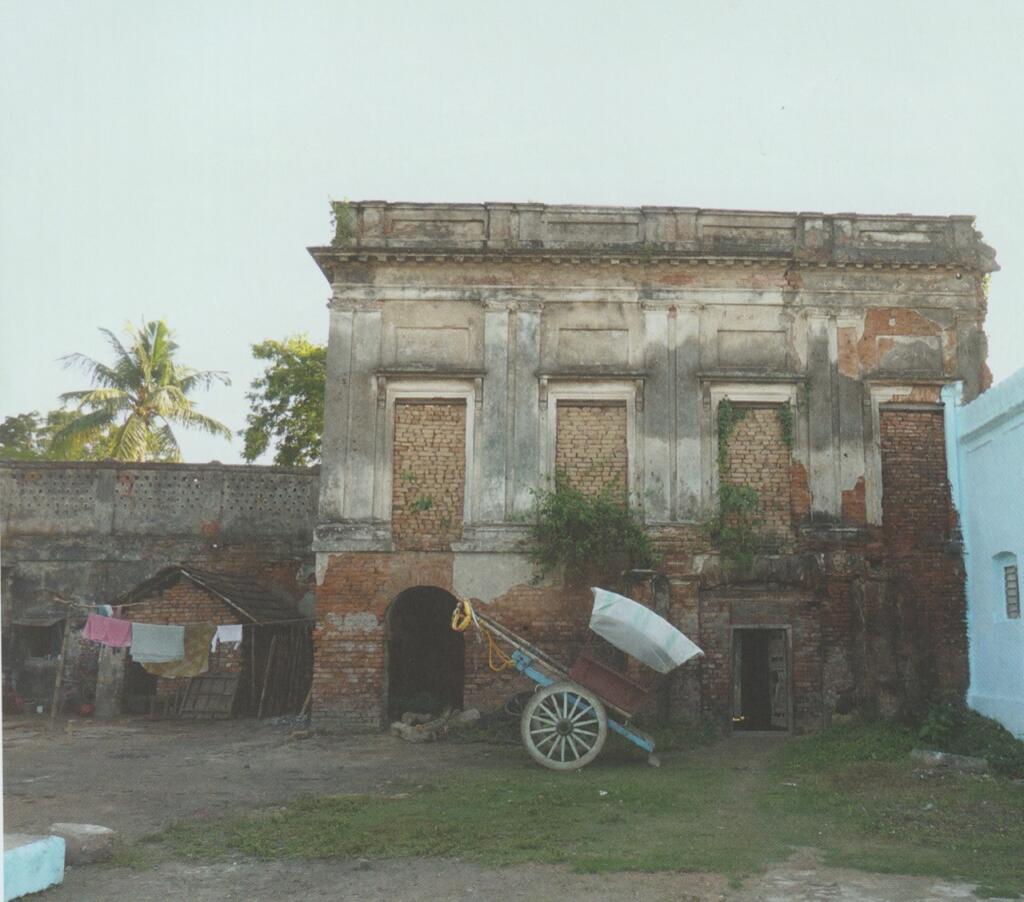 Even while the city was in decline, why were people still building mansions and houses in Murshidabad?

It may seem curious at first, but it was because there was still money around, even though power had shifted to Calcutta. The Hazarduari Palace, built by the British engineer Captain Duncan McLeod for the Nawab Humayan Jah, was not finished until 1829 and was three times larger than the palace it replaced. In the Nawabs’ case they were able to draw on something called the Nizamat Fund, which had been established by the East India Company to receive their share of the land revenue. The last Nawabi palace, the New Palace, was finished in 1904. There were also a number of Jain families who had emigrated here in the early 18thcentury as bankers to the Nawabs and the British. They consolidated their position through moneylending and landowning — like the Dugar family, who erected the magnificent Kathgola Palace in the 1870s as a solid symbol of their wealth.

Could you tell us about the painting traditions of the region and explain the shift to the more Westernised company school? How did British patronage change the language of the art form?

I am not an art expert and not qualified to comment on this, but we do have glimpses of Murshidabad through the work of the European artist George Farrington, who captured some of the events there. Much of Farrington’s original work has been lost, but it was copied by native artists and is fairly well known so we can see what the city and its people looked like in the late 18thcentury.

Some of Murshidabad’s finest exports were its textiles. Could Chikankari textiles have originated here? Could you tell us about the history of sericulture in Murshidabad?

Again, I’m not an expert on this, but current thinking is that the art of chikankari came from Dacca so may well have travelled to Lucknow via Murshidabad, though the city now has no tradition of it. It is also difficult to buy locally made silk in Murshidabad itself – there is a row of shacks between two palaces selling tourist stuff like shola carvings – but you have to go to Netaji Road, away from the centre, to find sari shops. Even then, it was not easy to find locally made silk saris, but the authentic Murshidabad sari is a beautiful thing with the pallav that echoes the little compartments of carved figures on Bengali temples. 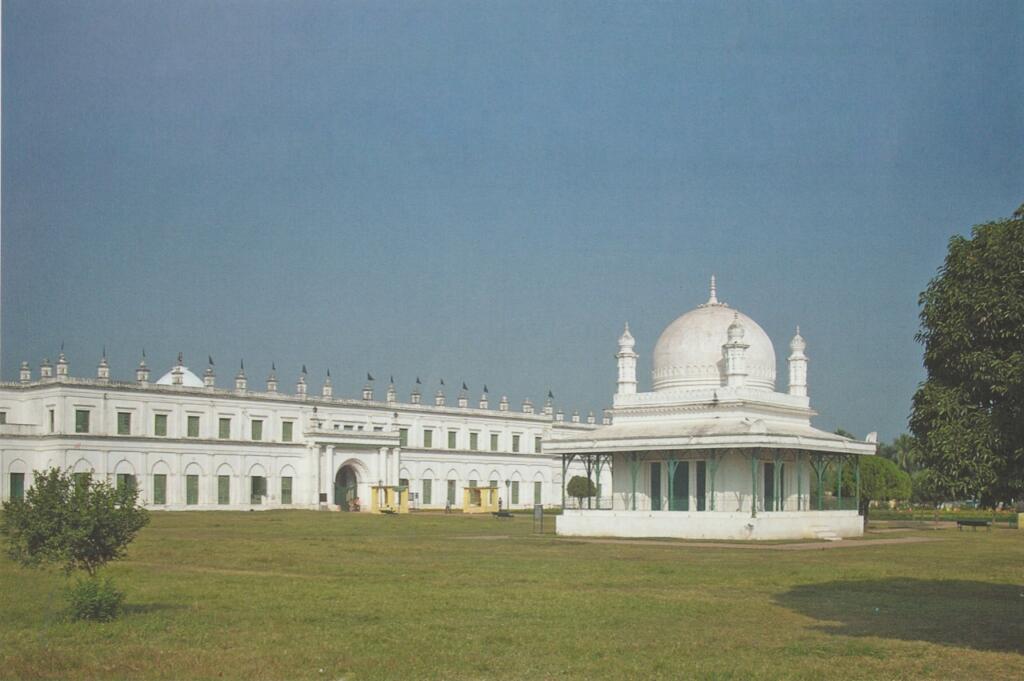 Medina with the Imambara in the background, image courtesy Neeta Das

What was Murshidabad society like at the peak of its prosperity? What were the cultures that shaped its identity and does it have a modern parallel?

During the years between 1704 and 1772, this was a flourishing city. It was extremely cosmopolitan, attracting people from far and wide – the Jains from Rajputana, Armenians from the Near East, Jewish merchants and Dutch and Britons from their respective East India Companies. The ghats, of which only one substantial one remains today, were packed with shipping and small boats and trade was said to be as substantial as that of London. A mint was established in 1705, but its only trace today remains in the name of Mint Ghat. Freedom of worship was encouraged, as the numerous religious buildings testify – the Christian Armenian Church, numerous Hindu temples, Jain temples, the Shi’a Imambara (the largest in India) and Sunni mosques. There seem to have been no Sunni-Shi’a clashes like those reported in Lucknow.  Handsome buildings lined the streets, both classical European-style houses and Mughal-inspired palaces – old buildings were pulled down to make room for new, with Nawabs leading the way.  The European style became the most popular, and this is what we mostly see today.

There is really no modern parallel for what Murshidabad must have been like – it was built around the idea of a tolerant princely Muslim court, which of course doesn’t exist in present-day India. We still know very little about its arts and crafts, and the name ‘Murshidabad’ is only attached to the paintings and ivory of the period.

One comment on “Remains of the Day: The forgotten city of Murshidabad”