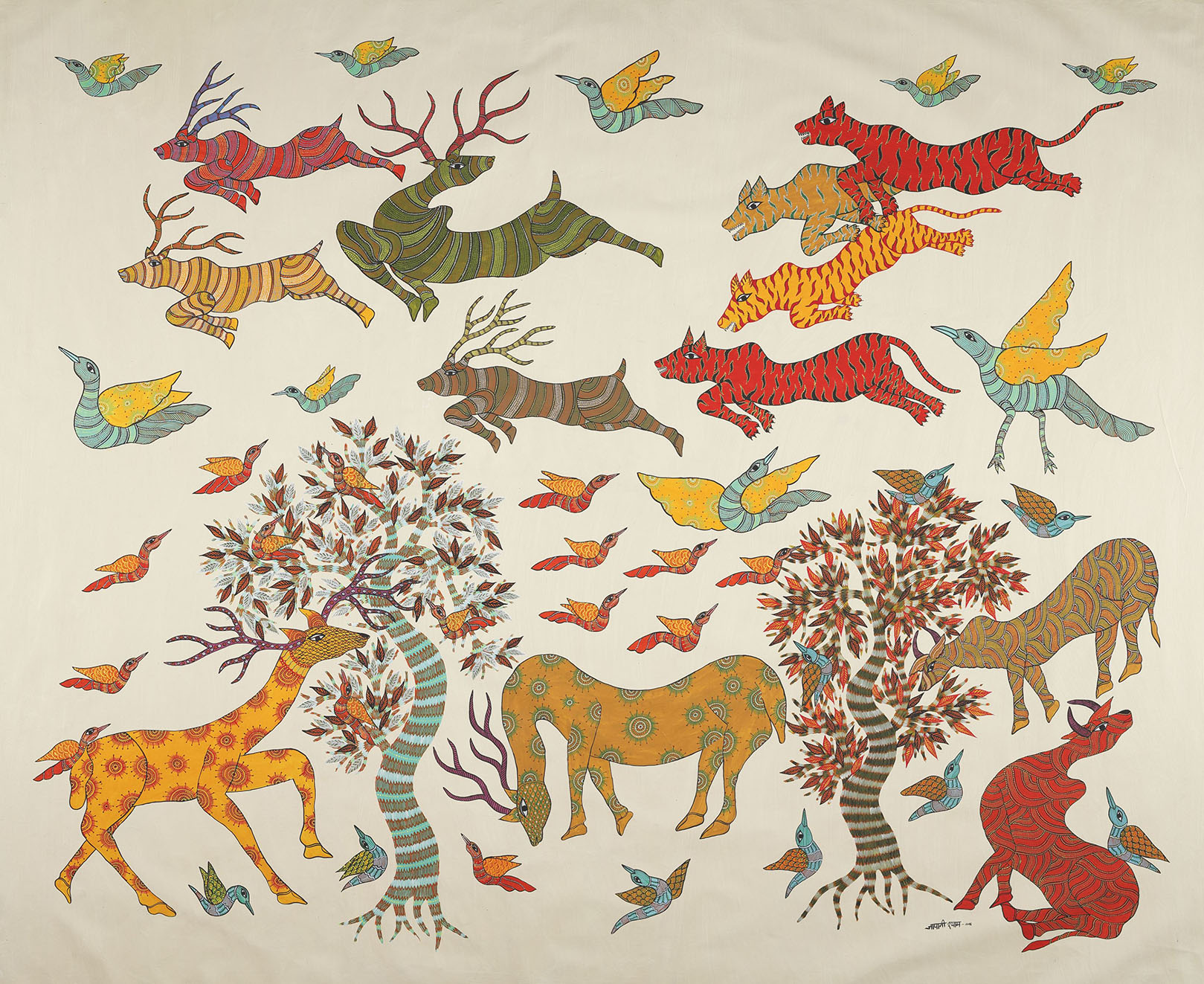 Prakritik Jeevan (translating to Life in Nature) by Japani Shyam

Emanating from the largest Adivasi community of India is an ancient tradition of art that has transcended time, evolving over the last 1400 years. Oral traditions, folk tales and reverence for nature documented and celebrated through vibrant wall drawings and paintings by those known as the hill people, the original inhabitants of the Deccan, the people of Gond.

The last three decades have truly seen the globalisation of this ancient art form. It has grown from obscure cave paintings to residing on canvases in some of the finest and foremost galleries of the world. A large amount of credit for that goes to the pioneering talent of the Gond Adivasi artist Jangarh Singh Shyam. A prodigiously gifted child, he would paint across the walls of his village in Patangarh, Madhya Pradesh using only paints organically created from the various colours of mud around him. His works depicted nature, local deities and Gondi folk stories. Having been “discovered” by renowned artist J Swaminathan, as a young tribal artist he was equipped for the first time with modern drawing tools and a canvas with acrylic paints; there was no looking back. He initiated what was called the Jangarh Kalaam, his style of painting Gond works upon materials such as canvas. And now his wife Nankusiya Bai and his children, Mayank and Japani, carry forward the legacy of his talent into the contemporary art world.

Japani (the Indianized word for Japanese), who is named after her father’s first trip to Japan, is an award-winning Gond artist in her own right. We spoke to the late Jangarh Shyam’s daughter about her life growing up in an artistic household and her journey navigating her own artistic identity beyond that of her family’s.

A childhood among artists

Japani and her artist brother Mayank grew up in the city of Bhopal, surrounded by the tactile environment of their parents’ artistry. Watching their parents create art, they were exposed since infancy to the sight of vivid colours, brushes and canvases. “Since my father worked alone, we watched how he involved my mother to help him with his process, particularly in drawing and painting. It was most natural to us to start drawing and painting too since that was the one big constant we grew up around.” Carrying the influence of her father, she understood even as a young child that he was no ordinary man. Whether it was carpentry, pottery, music or painting — she describes him as a man steeped in the arts. For her, he lived, breathed and created art. This was no doubt the formative experience and environment that led to Japani’s own evolution as an artist. Having completed her studies up to class 12, Japani then chose to explore her career full-time as a Gond artist, with the support of her family. At the age of 33 now, she speaks with conviction about Gond art as her sole vocation and life’s purpose.

When asked what it was like trying to define her own identity in a house full of artists, Japani says, “My father always encouraged us all to draw and paint whatever we wanted to. But more importantly to develop our own individual styles. Never to copy anyone else but to create our own personal sense of aesthetic and design.” She explains that while everyone in the family is working off the same background of the Jangarh Kalaam style, each has veered off and explored their own ideas about Gond art and now project their own interpretation of this art form in their work. 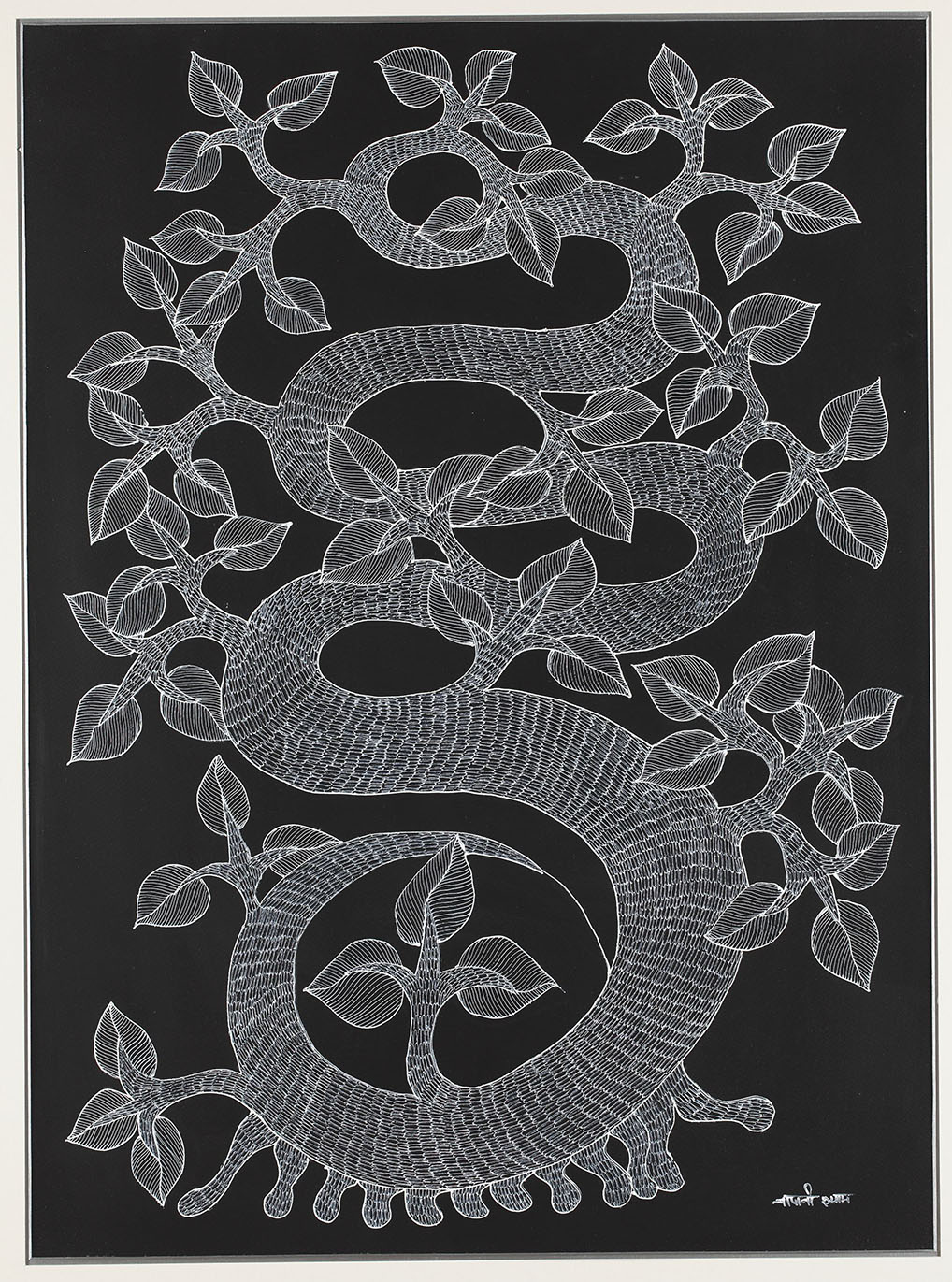 The power of colour

Japani’s style has been characterised by her works in pigments — she lingers in shades of black, white and grey. Her pieces exemplify an intricate and imaginative detailing of natural elements, trees and tribal customs. “Over time, I’ve devised my own style, distinct to that of my family members. I primarily love to work off black backgrounds with white paint. That is how it stands apart from the others.”

When occasionally working with synthetic colours, she has gravitated towards a more contemporary aesthetic, largely using the western-style primary colour palette of bright yellow, dark blue and red. “Even these colours I use have become identifying markers of my work, since most other artists stick to a traditional palette of earthy shades.”

But her real joy lies in rediscovering the lost natural colours of her village. “I have a personal desire to work with natural colours. Yellow, red and black soil were once freely available in the village and were sourced from our jungles. They were used to create natural paints and colours before the government started placing restrictions on them.”

So far, Japani has only been able to track down the white pigmented paint. While it seems like an uphill battle to revive this old art form with the use of natural colours, Japani is determined. “I’m still investigating how I can get my hands on the other colours since the government has banned them. I most look forward to how these natural colours will manifest upon the canvas in my work.”

Japani says that through her art, she is often trying to reconcile her urban life with that of the village. “While we grew up in the city, we often also went back and forth from our village in Patangarh where our father grew up. Our world view was shaped trying to bridge that gap between the stories and thoughts prevalent in the village to more modern takes that we learnt in the city.”

In this painting, which Japani has titled Shehari Jeevan (translating in English to City Life) a bustling urban-rural menagerie is set in tones of bright red, green and grey upon a white background. It portrays a heady mix of folks in the city — copulating in tiny apartments, wining and dining at restaurants, busy with cell phones in hand with an aeroplane flying overhead. Interestingly, this urbane setting merges seamlessly with the village existence in its backdrop, the serpentine trees and hills, birds flying alongside the aeroplane. Laterally displayed are village hutments with what appears to be a couple brewing the sacred Adivasi mahua liquor, as well as fields with chickens and bullock carts.

“How do we perceive the happenings of the village as we live in an urban and modern environment of the city? That perspective and struggle often comes across in our paintings. Things are changing in the city, people are moving forward and beyond the boundaries that have been set in the villages. As villages become cities and cities take on characteristics of villages, that dynamism is what we aim to capture in our work.” 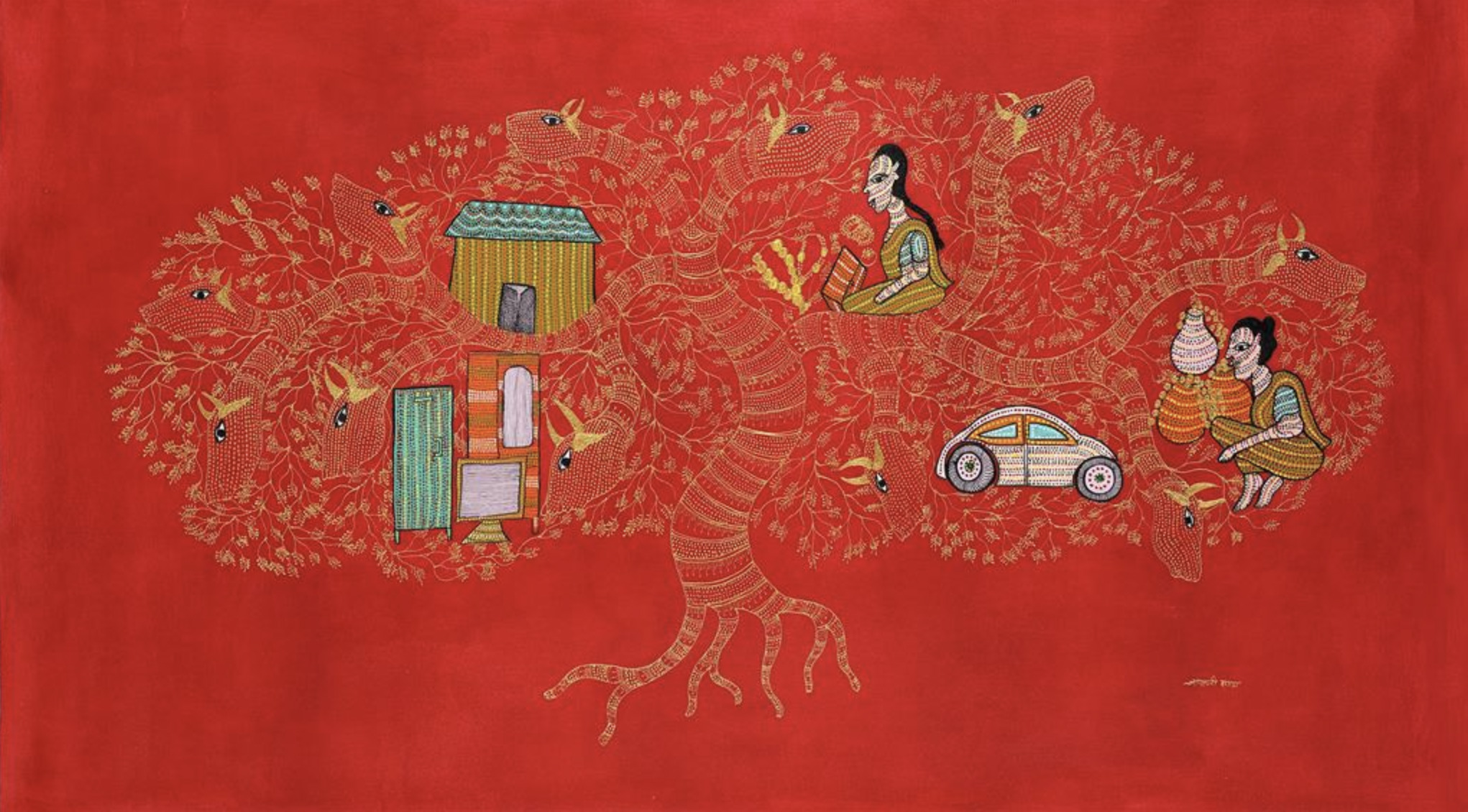 Through her pieces Japani also tries to tackle various gender issues that plague women from her community. In another of her important works which she has titled Dowry or Dahej, Japani has taken on a deep-rooted social evil. Set in the backdrop of a burning bridal red is the depiction of the tangible dowry expected to be provided upon handing over a daughter in marriage. A car, jewels, a dresser, a house — all markers of the transactional expectations of marital dowry that young brides must bring with them from their parents’ home. This burden of expectations she says has always disproportionately affected most women’s families perilously. “Through my art, I want to highlight these inequalities and oppressive patterns that women have to encounter.” 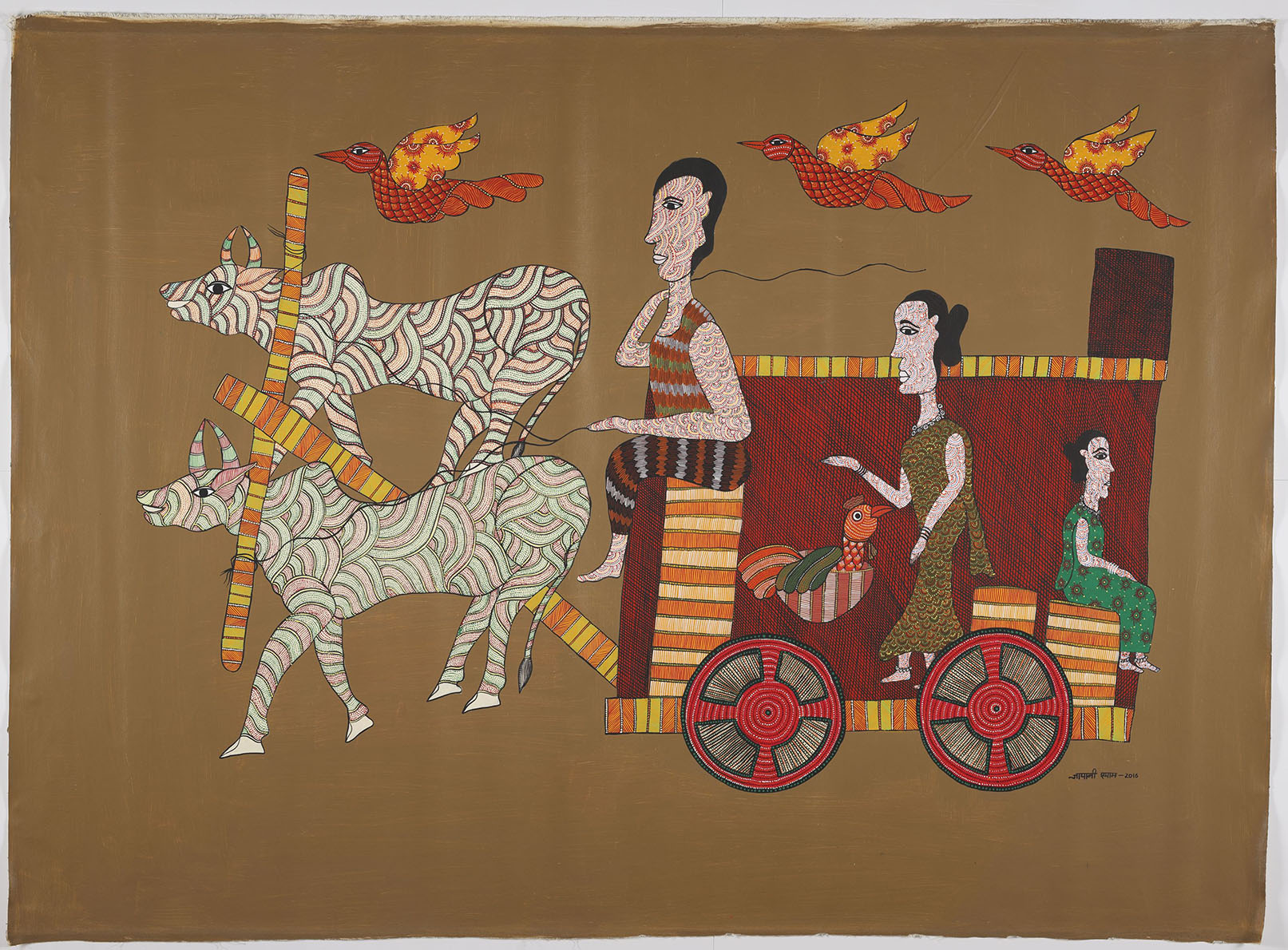 In one of her more cheerful pieces, which she has titled Pahuna (meaning an esteemed guest), Japani has captured the valued Adivasi practice of gifting. “In Pahuna, I have drawn a married woman and her daughter who are visiting the home of her brother. Amongst us Adivasis, it is considered most auspicious to bring traditionally brewed mahua liquor and a chicken for our close relatives, as a gift and offering.” In her classic red shades, she captures a woman and her young daughter aboard a bullock cart with a live chicken in a basket and a trunk of possessions, seemingly with Japani’s signature red birds guiding their way.