Modern art in India has taken an unusual route, circuitous enough that it may not be wise to try and pin down exactly when the Modernist movement here began. In the West, Modernist tendencies look at academic art or ‘realist’ traditional art (think Renaissance) and reject its foundations. But India has always had non-realist traditions in art. If I ask you to think of a realistic Indian portrait, the first image likely to come to mind is Raja Ravi Verma’s (1807-1906) oil paintings and prints. Ravi Verma is known as the father of Indian Modern Art, but he painted in the Western ‘classical’ tradition, and since India has inherited multiple non-realist traditions like miniature and folk paintings, is Ravi Verma’s modernism really an act of regression?

The answer is, it’s complicated. Indian Modernist tendencies should not be based on the dismissal of our traditional forms of painting, but instead seen as an exercise in the assimilation of traditional and Western art forms. Modern Indian art is not an aggressive rejection of the past, but is rather a rethinking/repurposing of the traditional. This reimagination is precisely what the Modern Art of Calcutta and Santiniketan represented in the late 19th and early 20th centuries. Among the artists was Abanindranath Tagore (1871-1951), nephew of Rabindranath Tagore, the founder of the Bengal School of Art. Although trained in Western art practices, Abanindranath became an active proponent of nationalist and revivalist art, inventing a new school of painting in the process. He retained his European training, selectively assimilating with Kalighat pats, Ajanta frescoes, Mughal miniatures and Japanese wash techniques. His nationalist framework in art became heavily personified later, leading to the creation of the iconic figure of ‘Bharat Mata’. The fire he ignited would be carried forward by several artists in Bengal, especially his pupils Jamini Roy and Nandalal Bose. 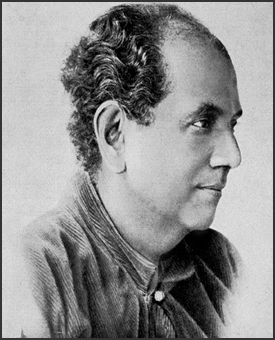 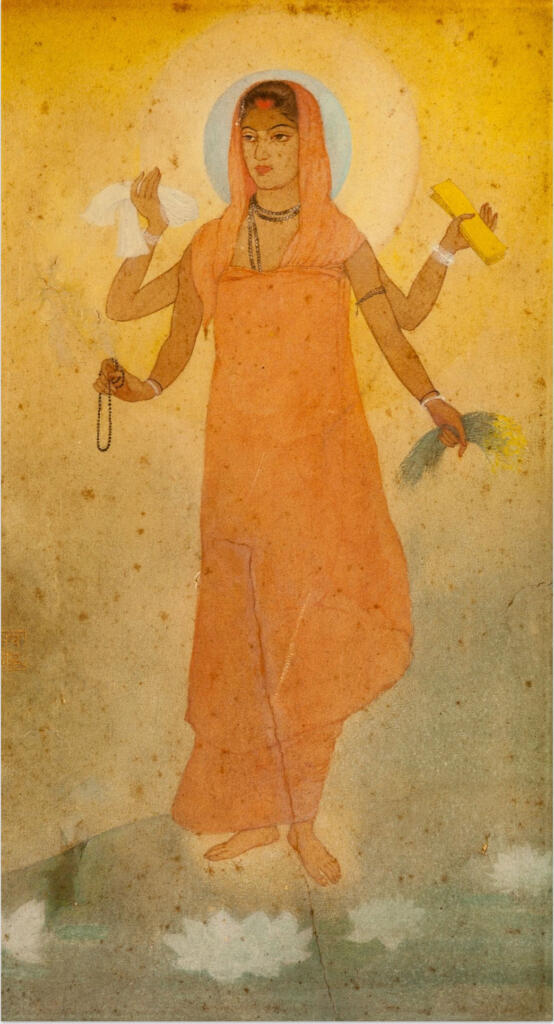 Jamini Roy (1887-1972) is an artist of many titles — neo-folk artist, Indian Modernist, first Indian Primitivist — who liked to describe himself as a patua. He holds a special place in Indian Modernism, at par with Rabindranath Tagore and Amrita Sher-Gil. Born in Beliatore, in the Bankura district, Roy moved to Calcutta in 1903 at the age of 16 to receive a formal art education at the Government School of Art. Under the tutelage of Abanindranath Tagore, he was formally educated in the European traditional style. His early works are rarely discussed, even though Roy continued to produce them till the 1930s, a decade after his departure to indigenous influences. Roy showcased his technique of line and form here, but not in colour, especially when compared to his larger, far more exuberant body of work. Take this still life of a flowerpot, for instance. The signature short strokes of post-Impressionism here give a palette knife effect instead, and though the perspective and composition are well balanced, the form of the flowers seems separate, aloof. Roy was able to draw on the Western post-Impressionists’ strong chromatism and flat patches of colour but was unable to completely shed representational forms. 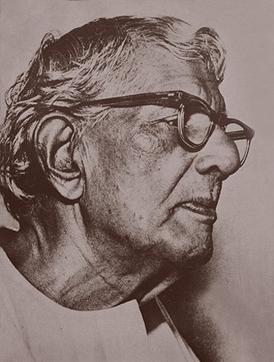 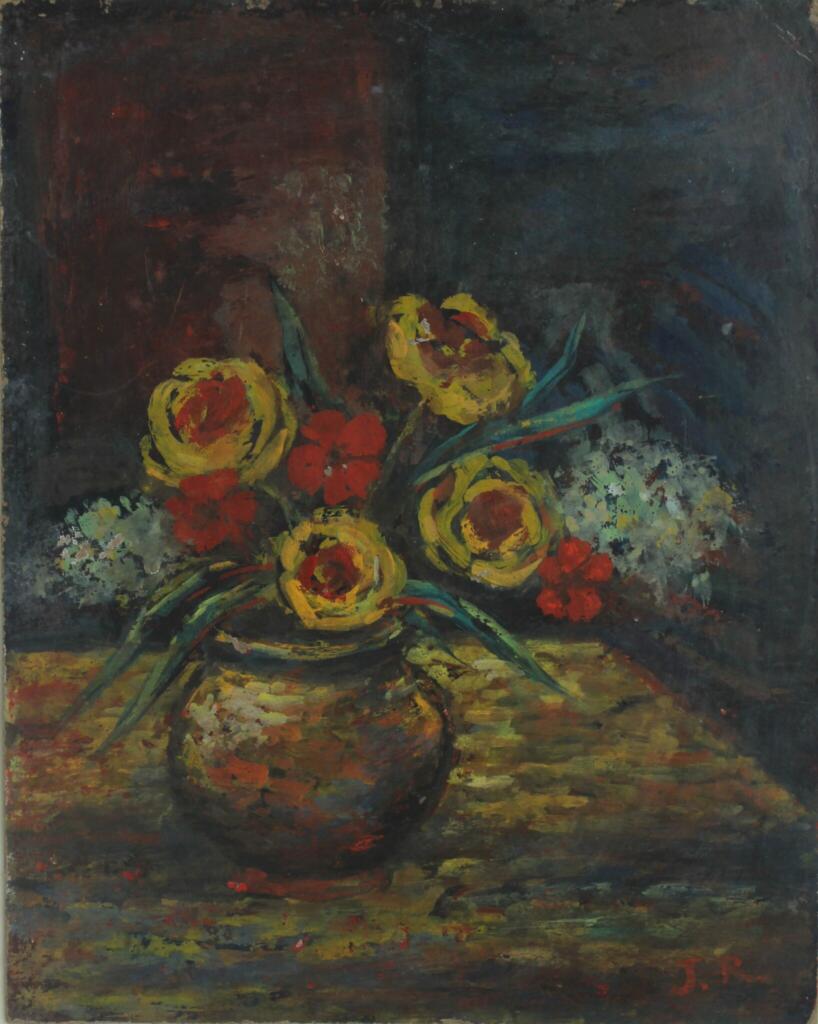 Once exposed to Abanindranath’s Indian Society of Oriental Art, Roy found inspiration in Chinese and Japanese wash techniques. These studies of the East brought him to the realisation that nationalism in art needed to shift its focus from ‘themed paintings’ to the preservation of indigenous techniques. Oil colours were neither native to nor manufactured in India. During periodic visits to his village (1923-1924), he found his authentic self in the material technology and iconography of the village pats/ pattachitras. The tradition also allowed him to finally forego representational forms and move towards symbolism.

Roy learnt how to make natural colours from the Santhal patuas and further incorporated their use of simplistic form and bold lines. This was not mere revivalism, for Roy’s deliberate and often contoured (for emotive effect) lines were different from the spontaneous brushwork of pattachitras. He became the ‘Master of lines’, drawing upon other styles like Kalighat pats, kantha motifs, terracotta clay animals and Byzantine mosaics to arrive into his oeuvre. In his universal yet unique, flat and frieze-like style, Roy painted a diverse range of themes. Not only did he capture the essence of ordinary life — Santhal men and women, bauls, fakirs, animals and birds — but he also incorporated religious and folkloric narratives, timelessly framing them forever. 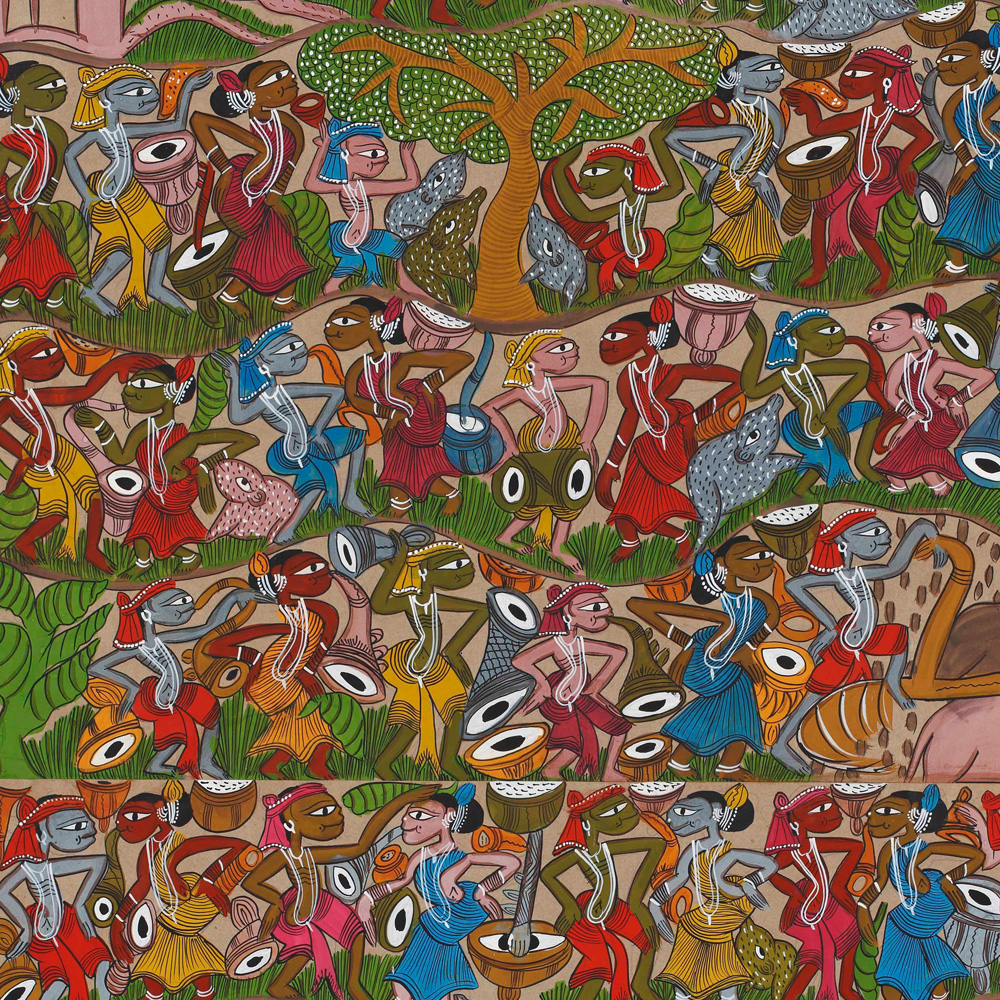 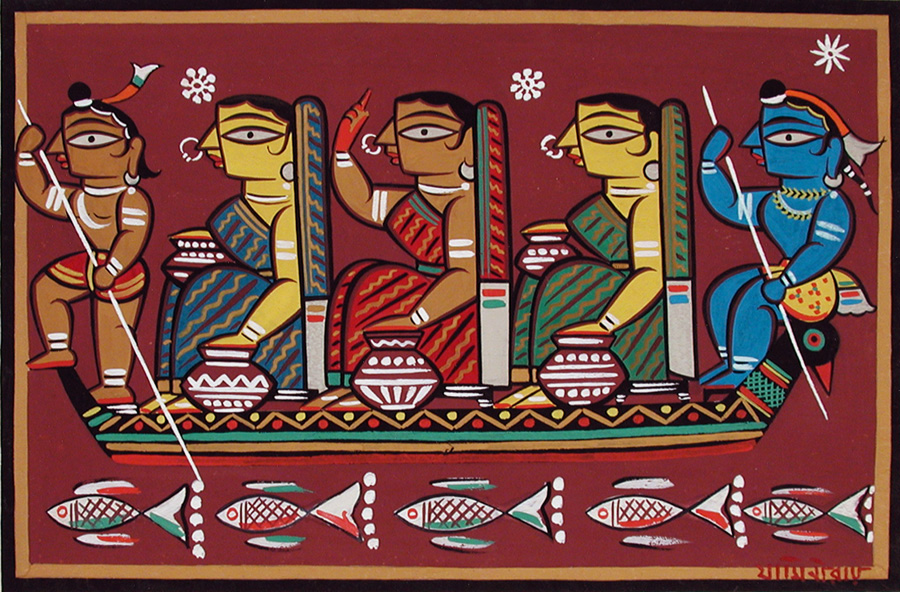 Roy’s attraction to village life had deepened at the same time that Kala Bhavan (1919) was founded in Santiniketan. Yet, unlike his contemporary Nandalal Bose (1882-1966), Roy refused the opportunity to join the institution. The Santhal way of life proved to be a major influence in Nandalal’s life as well, and during his time at Santiniketan (1921-1951), he grew into the same romantic primitivism as Jamini Roy, encouraging his students to create art that directly connected both them and the viewer to nature. An interesting tradition he unwittingly built was that of postcard paintings, some of the most unique treasures of this time which have come into public view only recently.

Roy’s refusal to join an institution which was in sync with his affinities seems less perplexing when one happens upon his quote, “Peace is not good for an artist. How can that happen? The mind strives and burns all the time in the creative activity of art.” Santiniketan is, after all, an abode of peace. Later, he also revealed that he feared he would not have been able to come into his own under the shadow of a giant, referring to Rabindranath Tagore. 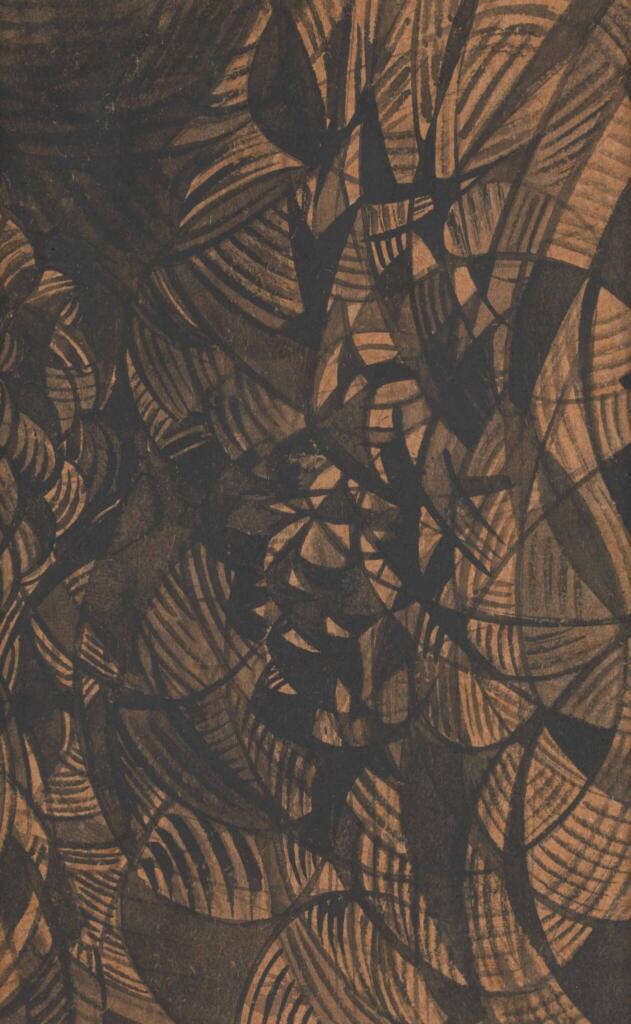 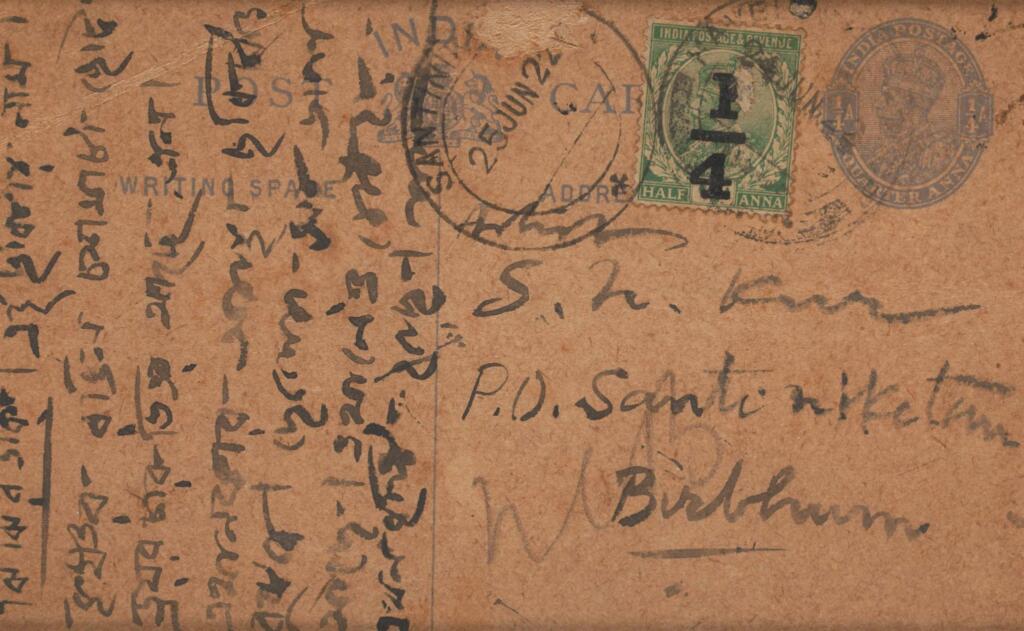 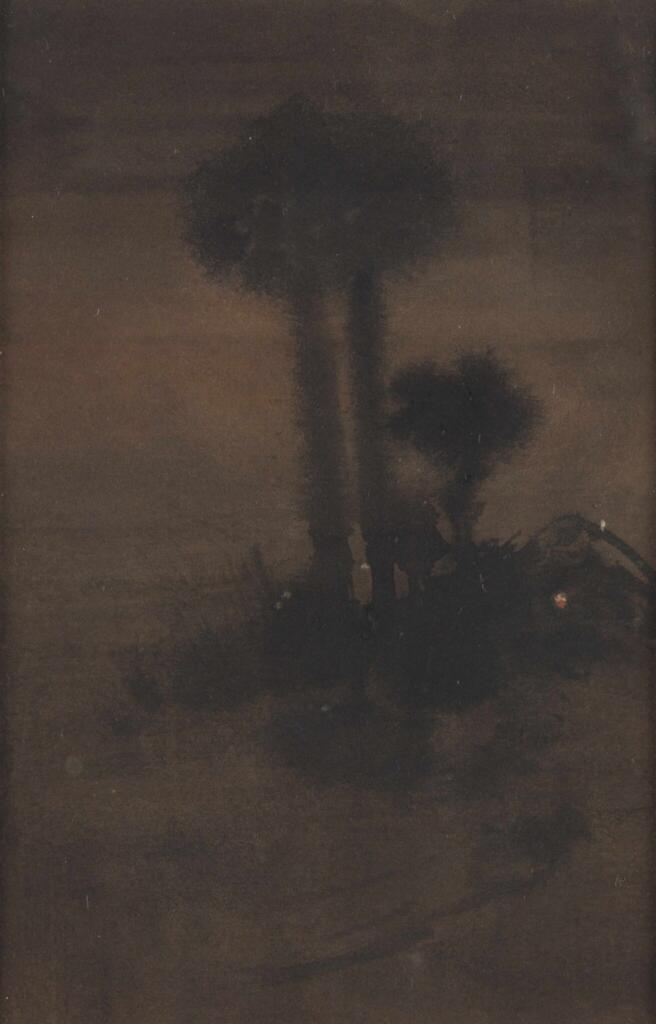 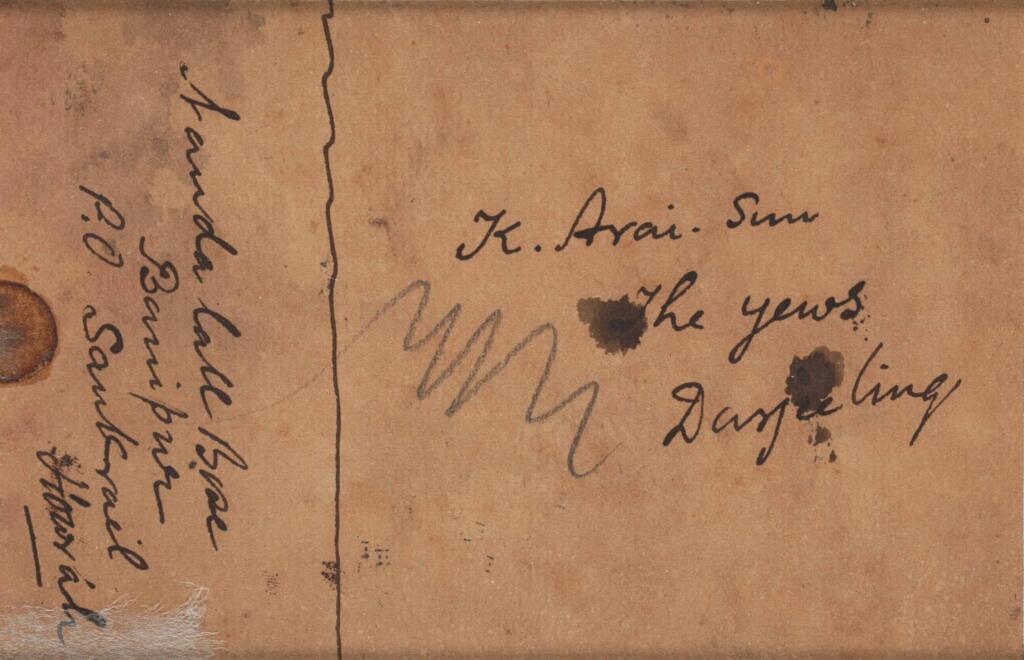 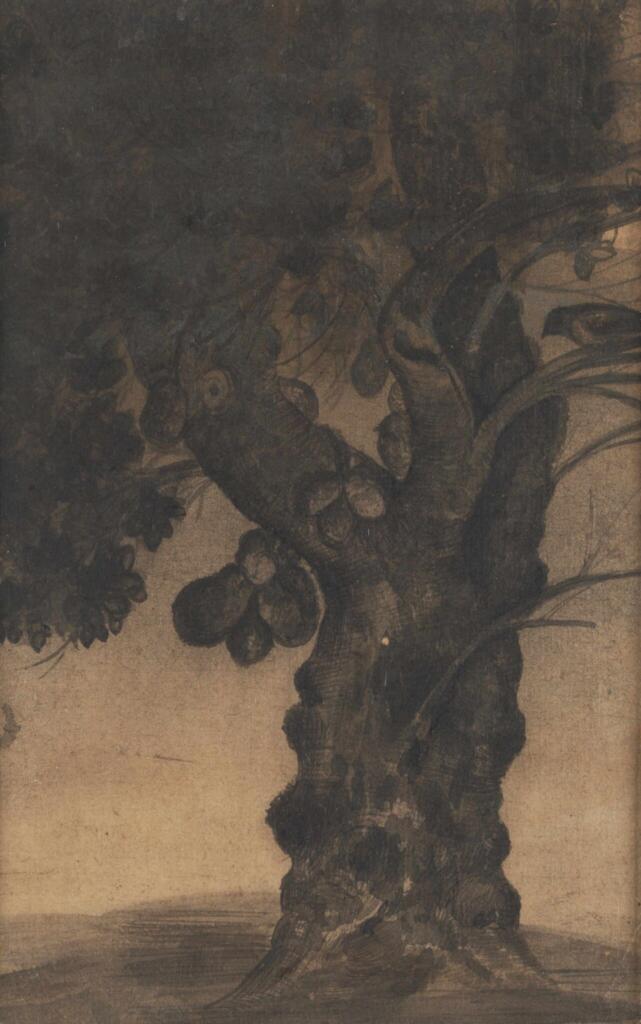 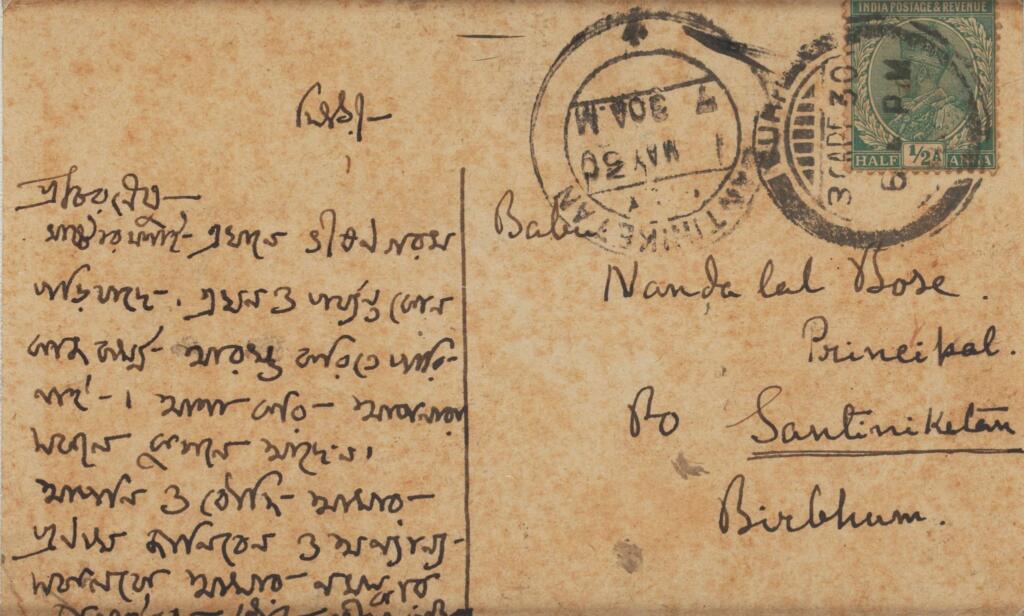 Roy was the first Indian artist to explore Jesus Christ as a theme; for inspiration, he studied ancient Christian iconography and photographic reproductions of Renaissance masters. He was influenced from a variety of representations of Christ, Byzantine mosaics and Kalighat patas being chief among them. The figure of Christ in his art is painted in his characteristic style — almond eyes, sharp lips, a voluminous body. Painted in earthy colours of maroon, orange and brown, these images were perhaps the first popular renditions of Christ in the strict Indian vocabulary. The Crucifixion and The Last Supper, showcased here, were his most used narratives. The peculiar aspect of the Crucifixion paintings is that they are devoid of the suffering generally seen in Christian iconography. Instead, Christ’s face is soft and tender as he looks directly at the viewer. 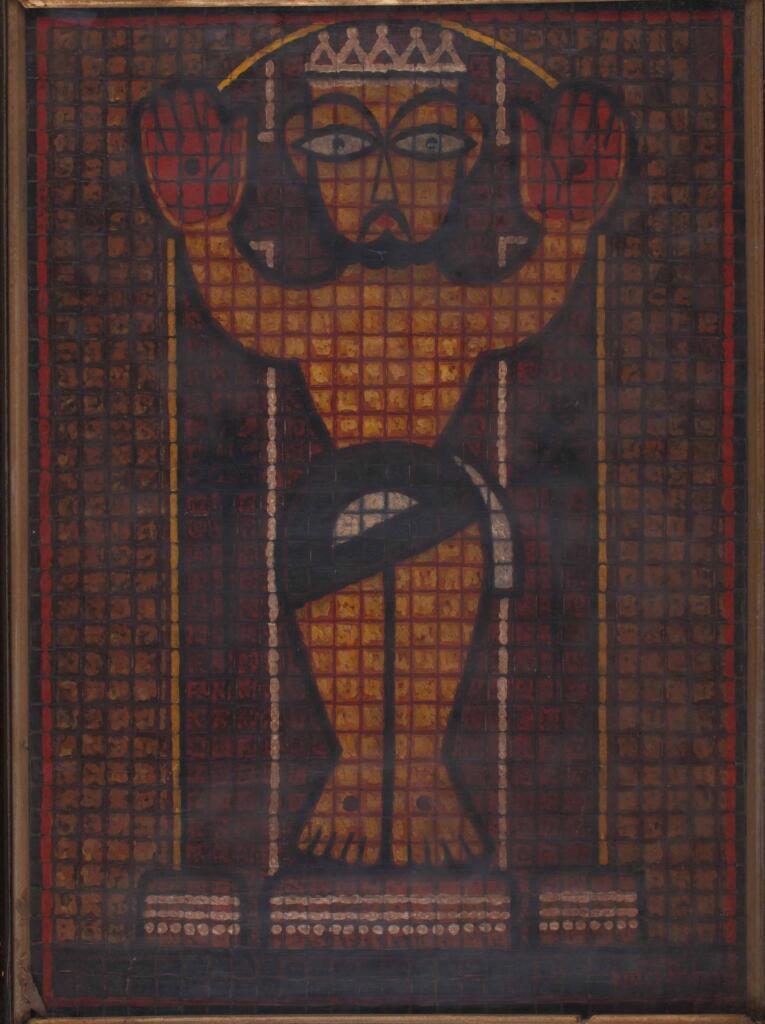 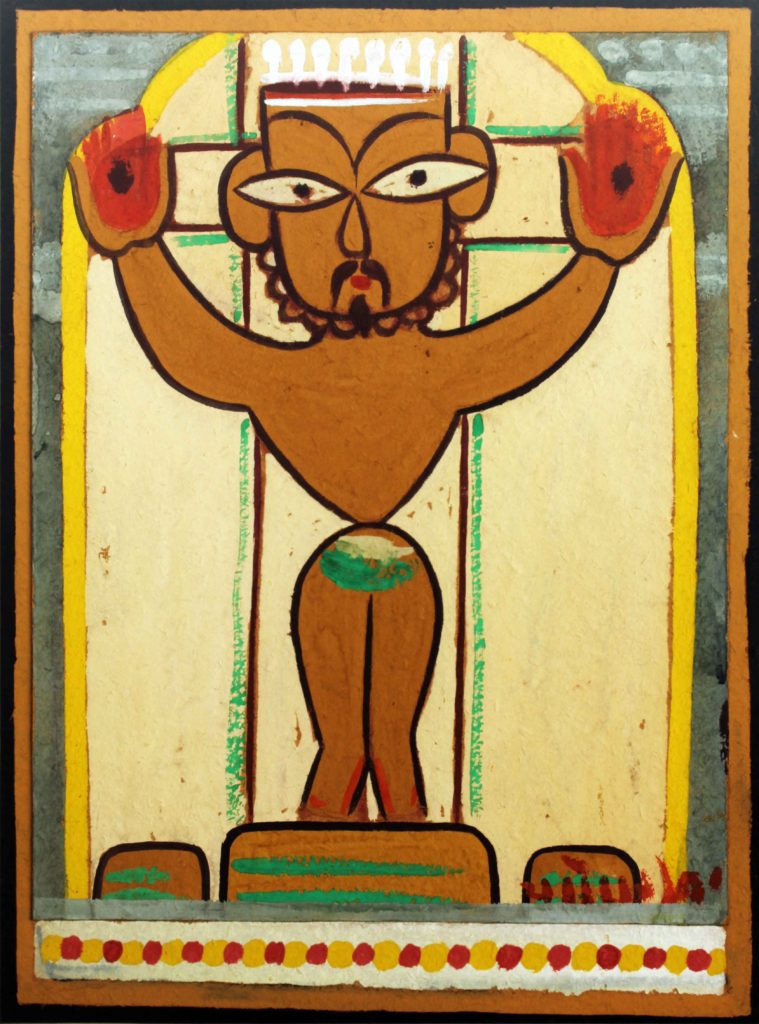 ‘The Last Supper’ by Jamini Roy, tempera on cloth mounted on canvas

The debate on whether Jamini Roy is a Revivalist or a Modernist is open to as many opinions as there are consumers of his art — after all, such is the power of his ‘popular art’. He evolved an art style that is symbolically distinctive yet emotionally universal, which could be mass produced for a wide(r) range of audiences. In 1972, the year he passed away, Jamini Roy was declared a National Treasure.

After independence, Bengal would become home to another master, a ‘Master of unbroken lines’, if you will. Jogen Chowdhury himself winces at this popularly awarded title, saying, “Art is more than unbroken lines.” Born in 1939 in Daharpara in Bengal (now Bangladesh), Chowdhury developed an affinity to village arts from a very young age. In 1947, he bore witness to the communal violence that caused the Partition, and his family was forced to relocate to West Bengal. These experiences left a lasting impression on him, especially visible in his earlier works in black ink. 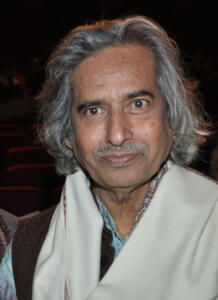 Chowdhury enrolled in the Government School of Arts and Crafts, Kolkata in 1955 for a formal education in the arts. Independence had not changed much in this field, and formal training was still given in European traditions with little creative space to allow for originality. While his artistic journey started with the creation of oil paintings, Chowdhury’s self-exploration really began after graduation. 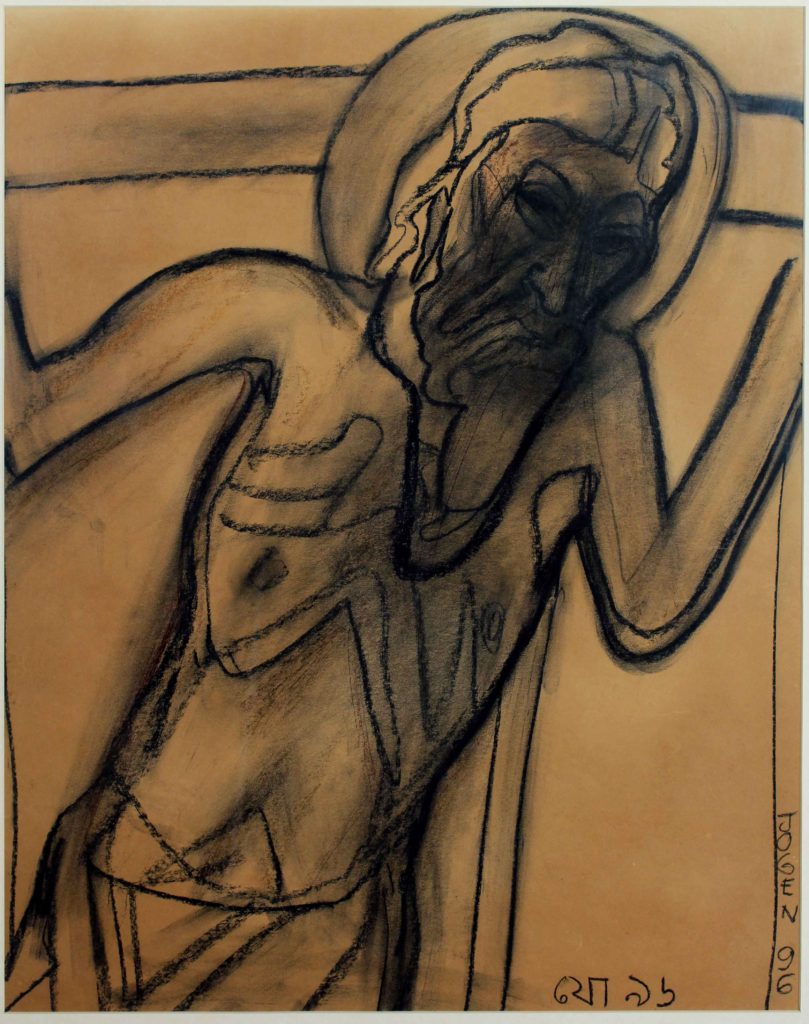 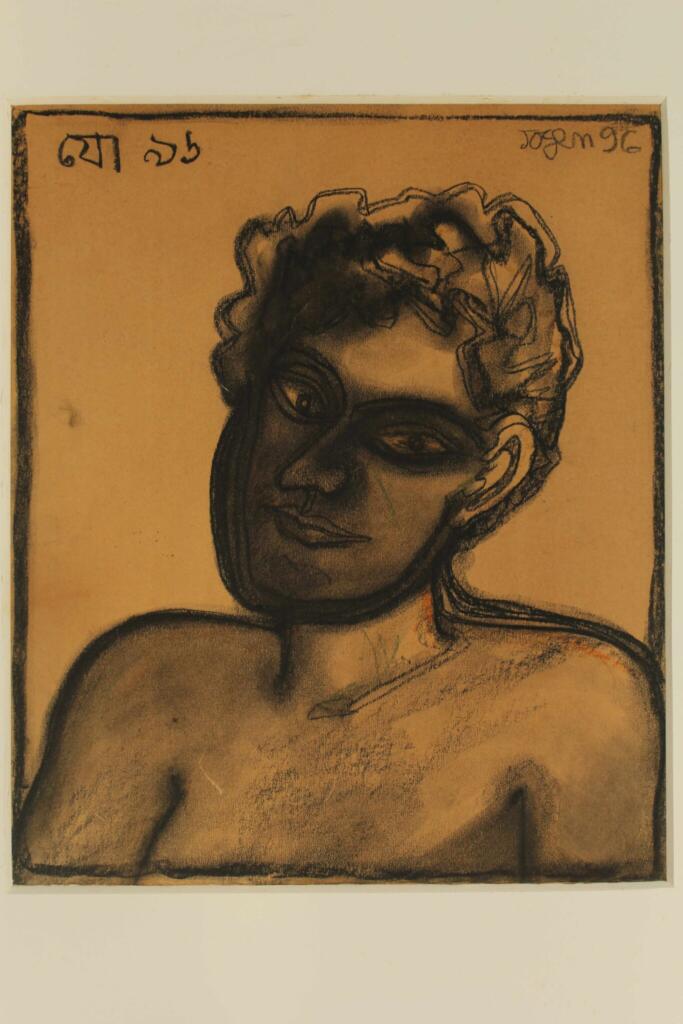 Untitled (Boy) by Jogen Chowdhury, pastel and charcoal on paper, 1996

Chowdhury began painting his own ideas in criss-crossing black ink, portraying human beings in everyday life. The stark difference in his everyday life, however, is that it is not romantic, ideal or meditative — it is instead harshly real, with his subjects pained by this harshness. With his series of oils titled Representation of Hell (1965), India discovered a new Figurative Expressionist fuelled by a distortion meant to evoke strong emotion.

Another major learning experience came in 1965, while living in Paris by way of a government scholarship, and training at L’Ecole Nationale Superieure des Beaux-Arts for two years. It led to a period of great introspection, and found him questioning the significance of art itself. Unlike his journey of assimilation in the past, Chowdhury was now on a quest for self-expression that shunned replication, whether Western or Indian.

Over the years, Chowdhury has used several mediums — oil, ink and pastels, watercolour, pen and charcoal, dealing with human figures and inanimate objects alike. But the most special is undoubtedly his mastery of the black lines that form the human body. In Love Letter, Chowdhury uses the body to give expression to both the symbolic and the subconscious. His use of ink and pastels here is an original form of painting that he developed after returning from Paris. With the line, the gaze and the colourless background, he creates a languid, wistful mood. Man Kneeling is another great example in the same style and a composition he has revisited several times. The suppression of the figure here is made obvious through his cramped posture and the definition of his ribcage, yet his gaze is tender, creating a confusing contradiction. 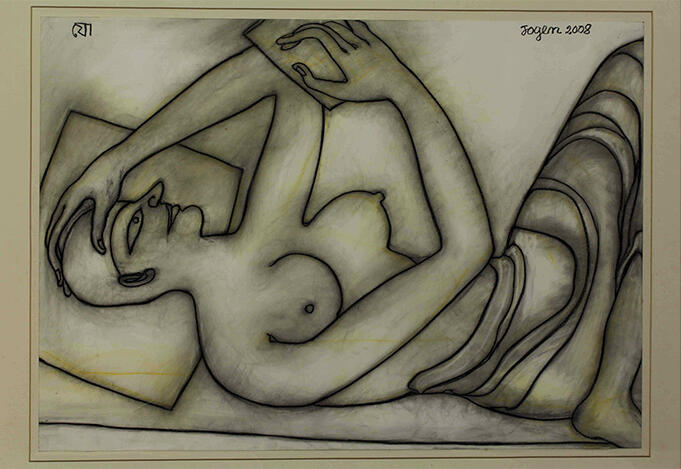 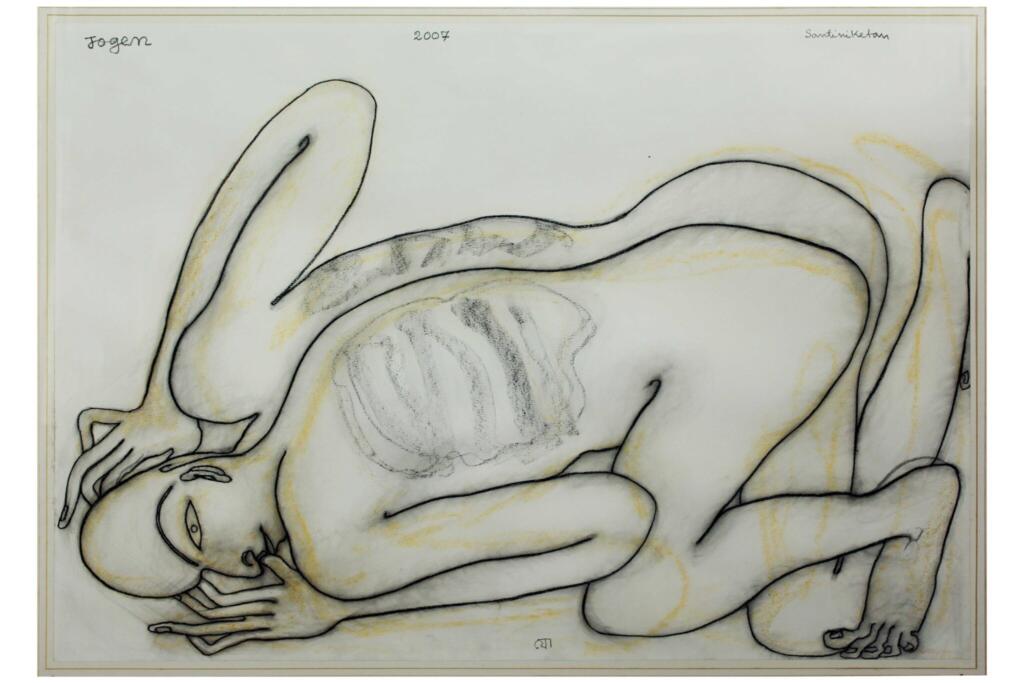 Man kneeling I by Jogen Chowdhury, dry pastel on paper, 2007

The Bengal School of Art has given us some of the most talented and universally lauded names in Indian art, expressing themselves through lines both fragmented and unbroken, creating worlds full of darkness and colour, carrying on artistic traditions and creating new ones.