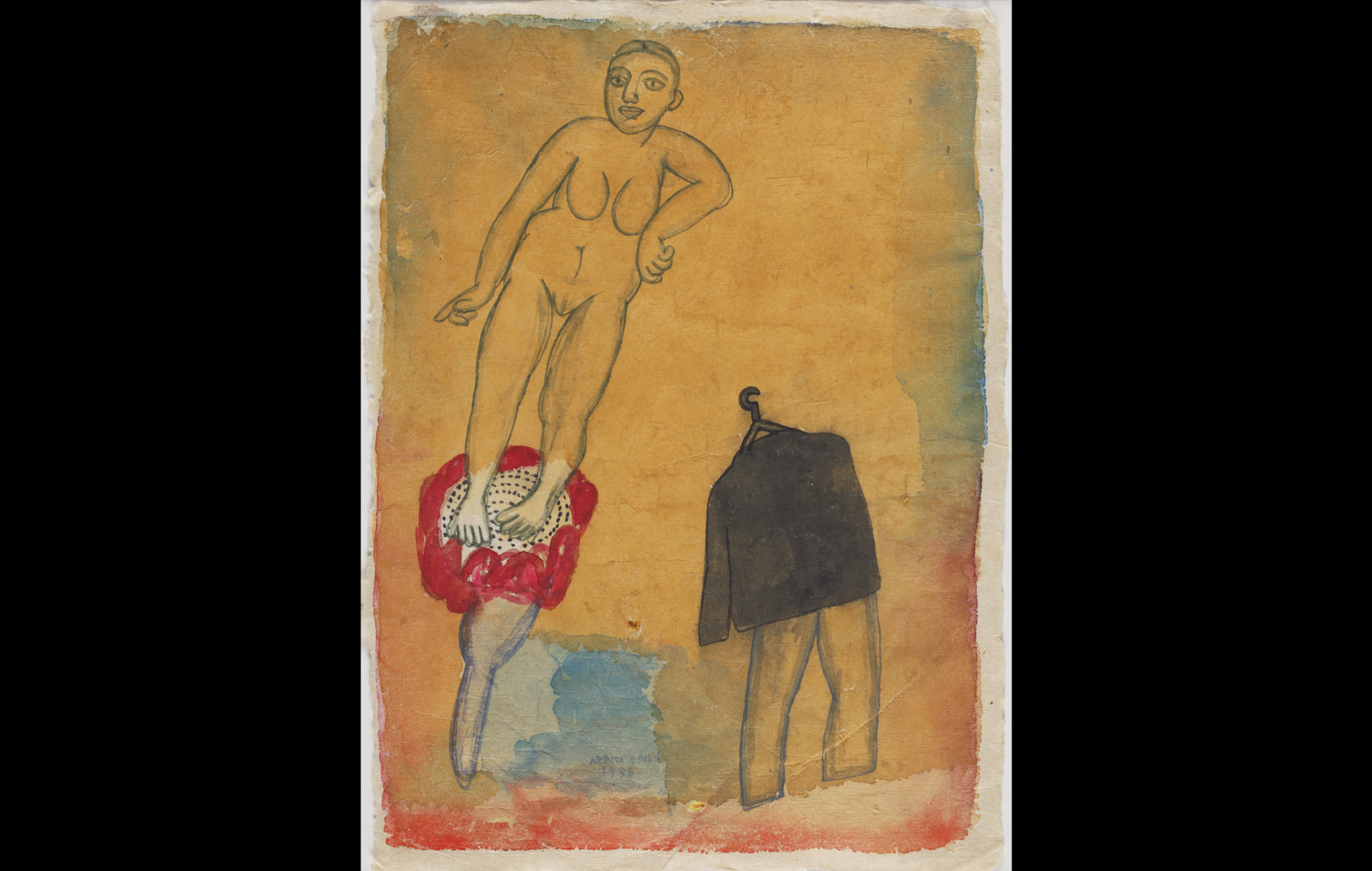 The paintings of artist Arpita Singh are primarily satirical. Yet, they are infused with emotion, creating a bridge between allegory and direct expression. She is a master of visual storytelling, and in her stories she brings forward the psychological impacts of two major oppressions in the world: patriarchy and systemic violence through wars. The artist insists that her paintings should be viewed ‘with the woman’s perspective’. In this painting, Singh uses a middle-aged female nude, a voluptuous figure that has featured in her work since 1982 . She has showcased a nude woman in contrast to a well suited man in multiple paintings, but here only the suit is drawn in the man’s stead. In such renditions, the men are shown well suited but weak in front of the woman. This is a comical jibe at patriarchy as the woman stands on top of a poppy seed, which symbolises eternal peace/rest, her expression is content. And her superiority is made obvious through both, the scale and posture of the figures. Singh’s art deals with deeply personal and political themes yet she uses a vibrant colour palette. Pleasant, light colours like pink, blue and yellow are often seen in her paintings, probably adding to her satirical storytelling. Through her figures, Arpita showcases a range of emotions, from hope to suffering, and this is precisely why she is one of the leading figurative expressionists in the country.

Arpita Singh was born in 1937 in Bangladesh. She moved to India after the partition, having an affinity towards art, she completed her diploma from Fine Arts at the Delhi Polytechnic. After graduation, she began her career at the Weaver’s Service Centres in Kolkata and New Delhi. She is a bold storyteller working primarily with watercolour on paper and oil on canvas. Her narrative paintings focus on the problems that are faced by women in India and the world in general. Though Arpita Singh is a modern expressionist artist, her style is influenced by miniature traditions and several folk art traditions. Since Singh’s first solo exhibition in 1972 in Delhi, her work has been featured regularly in gallery shows nationally and internationally. In her second solo exhibition at the Royal Academy of Arts, London, in 1982, Singh introduced the aforementioned middle-aged female nude in her work. Her nude was and is very different from the archetypical young beautiful females we see so often in paintings. In her dreamlike world, Singh gave us a very real female figure, faced with real afflictions in the patriarchal and violent world. She has won several awards throughout her career including the 1987 Algeria Biennale, and the 1991 Parishad Samman from the Sahitya Kala Parishad, New Delhi. The artist’s works have been showcased in more than twenty solo exhibitions in cities like Chandigarh, Bhopal, Mumbai and New Delhi.

This painting is part of our first digital exhibition, Body and Soul.

Watercolor and ink on paper