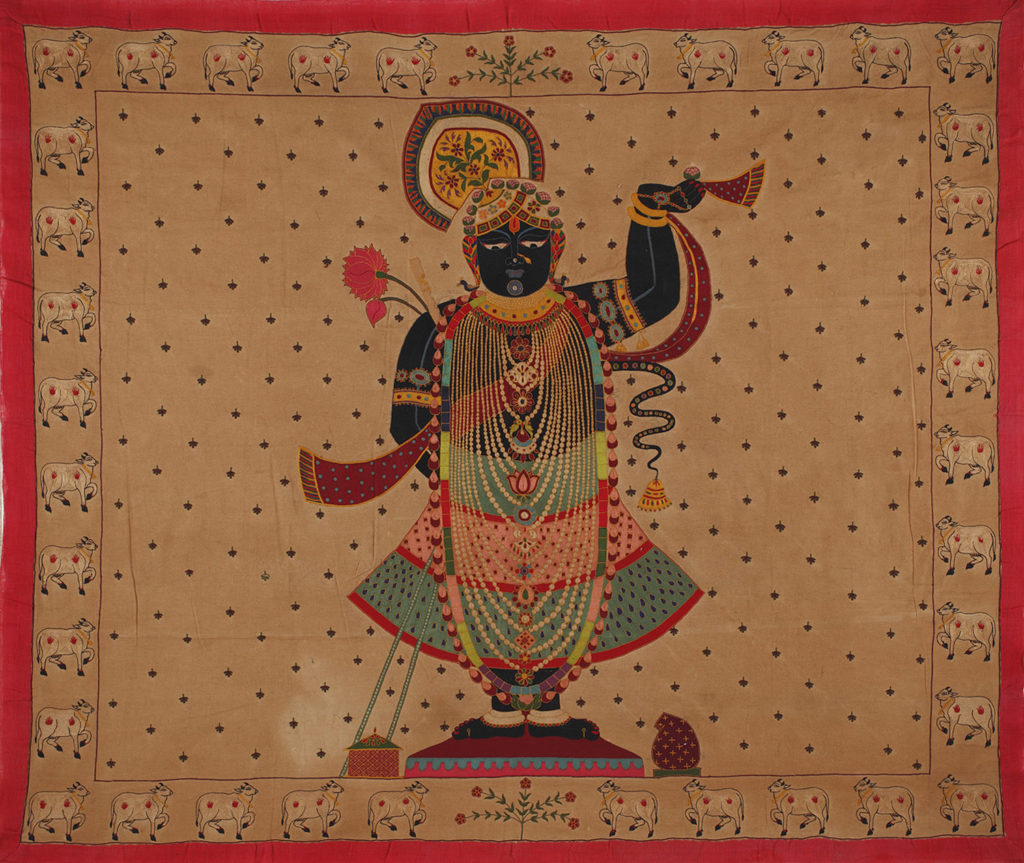 Srinathji, 20th century, embroidery on cloth, attributed to Gulshan’s workshop—click on the image for more

Long before he could recite book-length treatises on war, Krishna could move mountains. In one of the well-known myths that surround his legend, a seven-year-old Krishna had turned the floor of Mount Govardhan (close to Vrindavan) into a roof, to protect the locals from relentless rain and thunder. Known as Shrinathji, this avatar’s spiritual home is in Nathdwara today, close to Udaipur. While devotees throng the temple town for darshan eight times a day, it requires mob control during festivals such as Janmashtami, Sharad Purnima and Holi. Along with blessings, the disciples tend to leave with another special souvenir: a Pichwai painting.

The canvas of Pichwai covers six square feet of starched cotton and about 500 years of Indian history. In the 16th century, philosopher Vallabhacharya was an important leader of the Bhakti movement who founded the sect of Pushtimarg. According to Kavita Singh’s book Worshipping Shrinathji, he “emphasised the worship of Krishna as a child,” and popularised the worship of Shrinathji. Art historian Sonika Soni, a former curator at the City Palace Museum of Udaipur, says, “Vallabhacharya was one of the first [to initiate the worship of Shrinathji] because he saw the idol in his dreams.” Although, by the time the 18th century rolled around, along with Mughal emperor Aurangzeb’s reign, idol worship had lost its sheen, and the Maharaja of Mewar had to extend an invitation to the cult to settle down in his kingdom. “It is partially true that Aurangzeb was behind the move, but there were other political reasons as well. Although, no one has [researched] authoritatively on this,” says Soni. So, Shrinathji’s idol set sail from Braj for Mewar, along with an entourage of believers, sevaks and artists. “Chitraseva is an important component of Pushtimarg.Shrinathji is treated not as a deity, but as a seven-year-old child. He’s always given service and not worshipped, as such. So, Pichwai was essential to it. When Nathdwara was set up and the painting traditions started, artists migrated from Kota and Kishangarh to join the atelier of the haveli.” 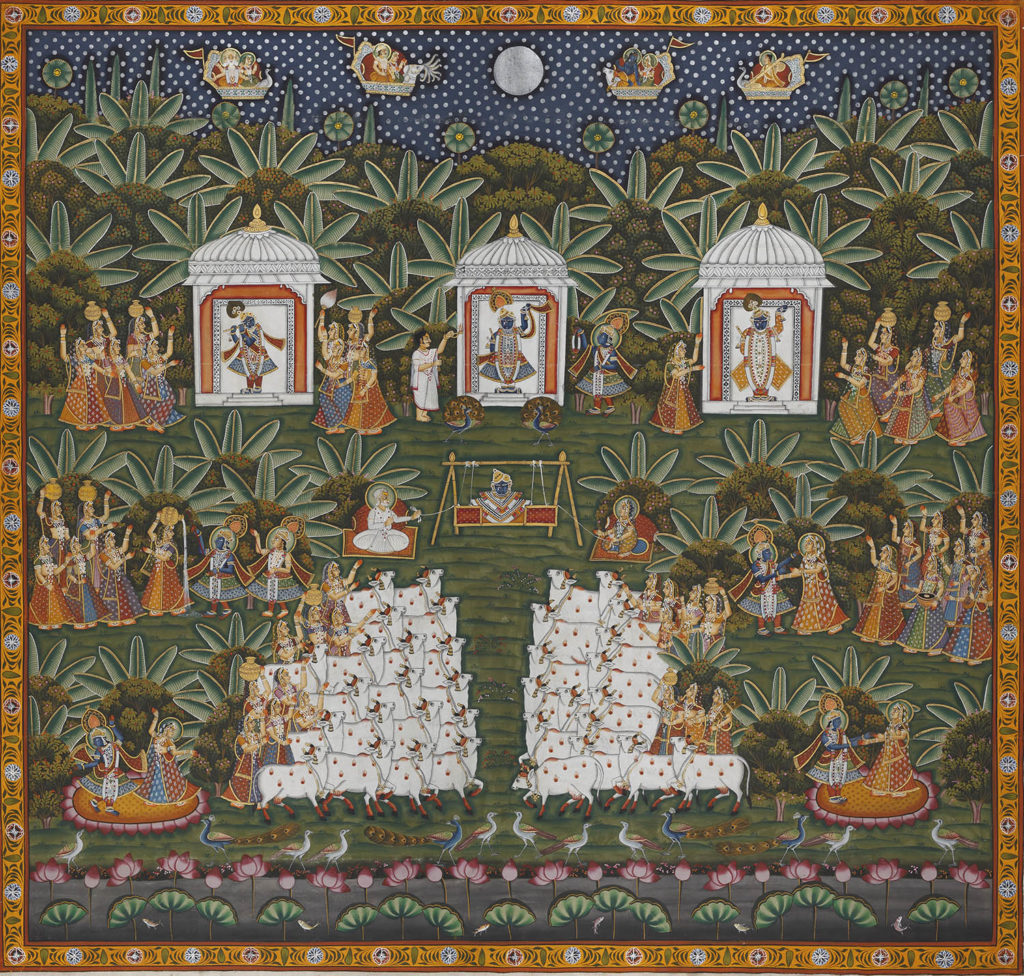 In the art of Pichwai, god is in the details. While Shrinathji occupies the heart of the canvas — with garlands touching his feet and his left hand always in the air, lifting Mount Govardhan — the background and borders are rendered with equally compelling motifs. Gopis in colourful flair skirts, cows covered in red handprints, dancing peacocks, vimanas flown by gods, swaying plantains, mango trees and lotuses are often repeated on the same fabric, as if block-printed. Explains Soni, “‘Pich’means the backdrop: it was meant to be hung behind the idol at the temple. So, the original Pichwai is a cutout, in which there’s a window cut for the idol to fit in. The painted [canvas] would only be the left, right and top; the centre would be empty. However, there were several tourists who wanted to take home souvenirs after visiting the temple. So, the paintings made for the market would have an image of the idol as well.”

The Pichwais borrow their narratives from the Dasham Skand, the 10th canto of the Bhagavata Purana, all of which are related to Krishna. For instance, a Pichwai celebrating Janmashtami would feature Yashoda, his adopted mother, rocking his cradle as he ruled over the world. In Raas-Leela, gopis would cavort around and with him; and in the ones celebrating Sharad Purnima, the full moon would flaunt a grey presence, even as the canvas would be crammed with cadmium reds, oranges and yellows. Soni says, “[The Pichwais show] Mathura, Braj and Vrindavan as lush, green and full of flora and fauna. All the gwalas (shepherds), headed by Krishna, would take their cows for grazing in the jungle. So, the jungles became a quintessential element of the depiction. Now, suppose an artist is working in Mewar, he would invariably get influenced by local [elements].” At the same time, a Pichwai artist would also fill his head with ideas from sources further afield. “In Pichwai, there was a beautiful amalgamation of European traditions. When Raja Ravi Verma visited Mewar, Nathdwara painters were influenced. Even photography had a deep impact on them, as they started playing with perspectives and realism. They shaped the pre-modern traditions of Pichwai.” 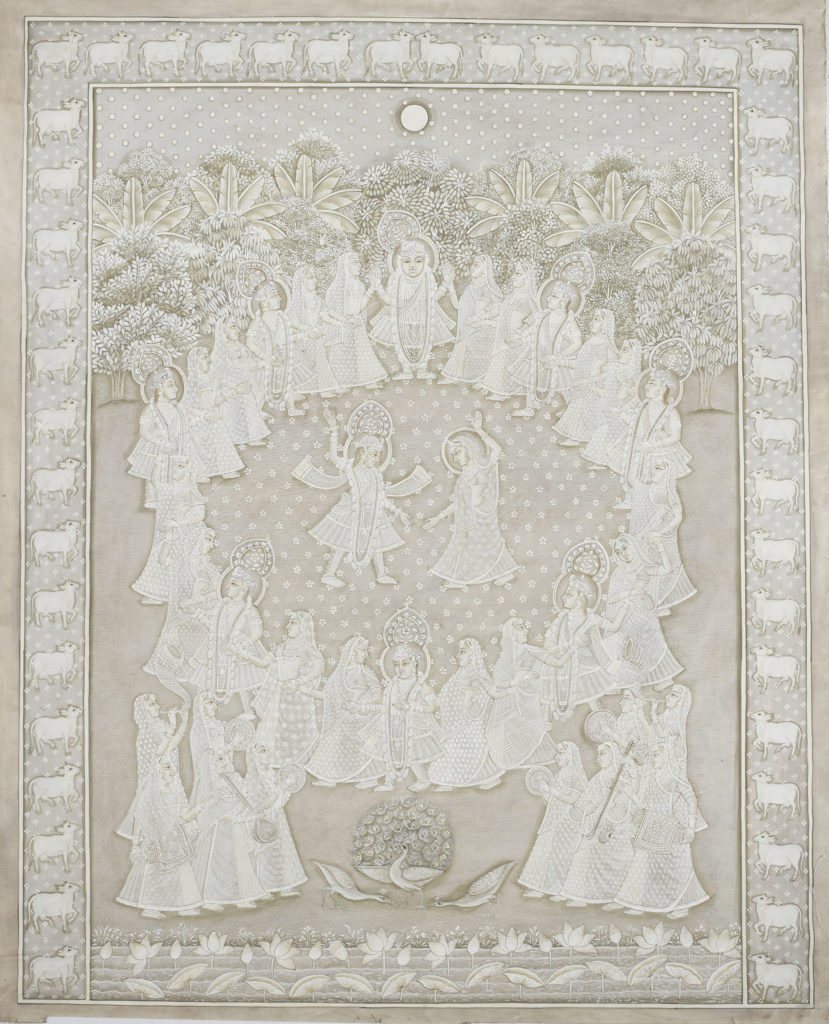 Krishna Leela Pichwai, undated, Gouache on cotton cloth, by an unidentified artist—click on the image for more

The Pichwai karkhana, like Mount Govardhan, is a pyramid. At the top is a master, say a well-known artist like Ghasi Ram Sharma, followed by a middle order of assistants, and then their apprentices. The painted Pichwais would use mineral pigments, metallics such as pure gold and silver, and organics such as red lac, procured from trees, and a deep yellow strained from cow urine. Soni who comes from a long line of traditional artists herself says of this last pigment, “Today, the formula is lost, but the element — called goguli — was meant for Krishna, as cows were his favourite.” Hand-embroidered Pichwais, using silk threads, zardozi or zari, were also an important subset. As were the Deccani Pichwais, which followed a dialect of their own.

According to art scholar and historian Saryu Doshi, who had written about the the Deccani Pichwais for Marg magazine in 1978, “The adherents of the Vallabha sect are chiefly found in Gujarat and Rajasthan. In the Deccan and south India, the cult seems to have had no following until the mid-seventeenth century, when a few families of northern origin made their way to Hyderabad.” One reason she believes the traders headed south was “the lure of Golconda diamonds.” While these paintings were most likely hand-drawn in the art centres of Masulipatam and Burhanpur, according to Doshi, “the Deccani affiliations are clearly visible in the delineation of the rocks and the tree of life motif as well as the shaded flowers. The sensuously drawn voluptuous women and the predilection for gold are again both suggestive of the tradition of painting prevalent in this region.” 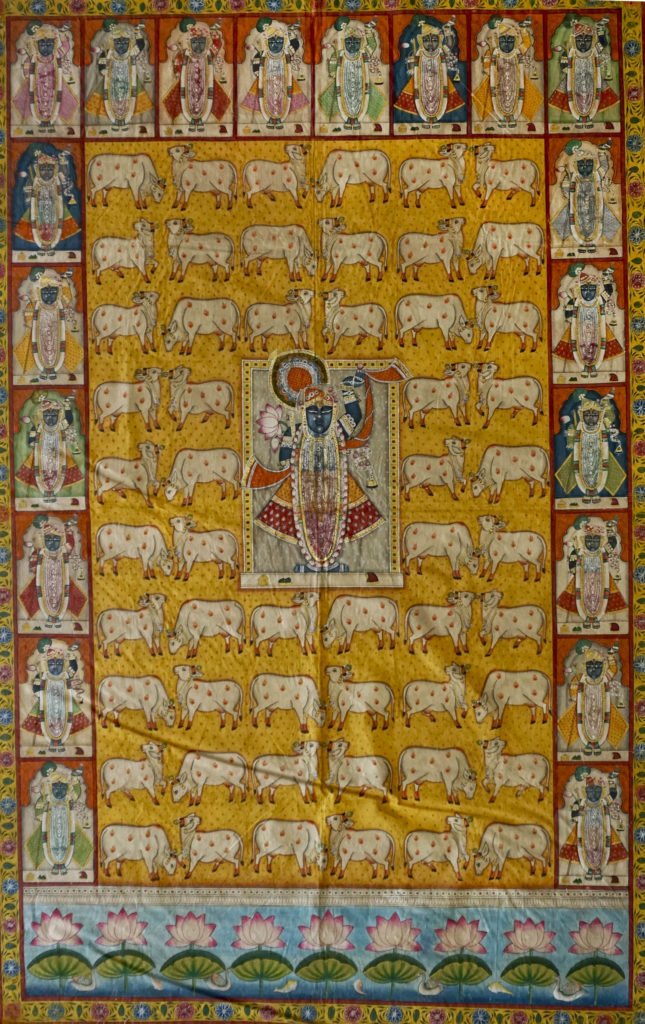 A healthy amount of cross-pollination and mingling is just one of the reasons the art has continued to evolve and thrive, believes Soni. “Each and every style in India is constantly merging and evolving. The Deccani Pichwais were a combination of printing, painting and gold work, called Kalamkaris. Pichwais [represent] a melting pot.” That’s the reason she thinks Pichwais have continued to find benefactors. “They are done for a deity, so there’s a lot of patronage, and the artist also does his best.”