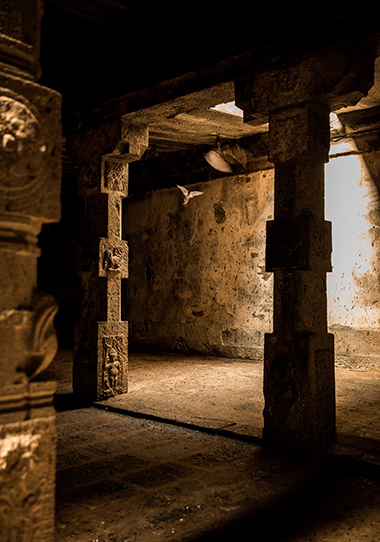 Imagine elbowing your way past a throng of hawkers outside a temple, queuing up with the devotees and walking up to the sanctum only to find you’re staring at nothingness. There’s no idol, no image, no form at all of any kind in the dark, quiet space. Welcome to Athmanathar Swamy temple, where the athma or soul takes precedence over wood, metal and stone.

There is a spiritual significance to idol-less worship in Hinduism. It’s believed that as one prays, reads scriptures and gains wisdom, their devotion matures and they attain the ‘supreme truth of formlessness.’ The Athmanathar Swamy temple in Avudaiyarkoil, Tamil Nadu in the Chettinad region is designed to illustrate this theology.

The legend of the temple goes like this: In 9th century AD, Manikkavacakar, the chieftain of Arimarthana Pandian II, was sent on a mission to buy horses for the kingdom. On his way, he comes across a guru chanting Shiva’s name. Manikkavacakar falls at the holy man’s feet and pleads to be made his student. He falls into a deep meditation, and when he awakens, he sees the guru is gone. Manikkavacakar realises he was guided by Shiva himself. So he uses the money meant for the horses to build a temple to the lord and that’s the story of the Athmanathar Swamy or the Thiruperunthurai temple. It’s also the explanation for why there are so many horse idols inside it. 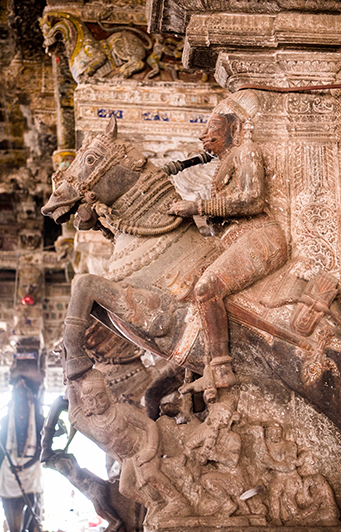 Manikkavacakar became one of the four major Tamil saints of Shaivism and it was in this temple that he composed his magnum opus, the Tiruvacakam, whose verses alone make up eight volumes out of the total twelve in Shaivite literature. Athmanathar Swamy temple is that rare thing: a shrine to Shiva without a lingam or Nandi. Only a pedestal or avudyar, which gives the temple town of Avudaiyarkoil its name. Also inside the sanctum is an upturned bowl or kuvalai, which represents the body and soul.

The main deity of Thiruperunthurai is Shiva as Athmanathar Swamy. His consort Yoga Nayika is also worshipped here. The goddess too is formless and symbolised by the Yoga ‘Peetham’ or pedestal on which her footprint is carved out. Rice cakes are kept under the bowl as an offering to her. The offering to Athmanathar Swamy, however, is symbolic rather than literal. During the daily puja, freshly cooked parboiled rice is heaped on the slab in the garbagriha or sanctum. The rising steam from the rice is offered to the lord.

At Athmanathar Swamy, Vedic rituals are performed instead of the Agama rituals that are typical in other Shiva shrines. The temple is administered by Nambiar Brahmins, who are said to be the descendants of Agnivesha, a saint born to the god of fire. Legend has it that Athmanathar himself taught Agnivesha the Vedas. In the first prakaram, which is the circle just outside the sanctum, there’s a four-pillared mandapa and in front of it is an idol of Manikkavacakar receiving his ‘deekshai’ or spiritual initiation. It is customary to worship this incarnation of Shiva by entering the ardha mandapa, the hall between the sanctum and the mandapa, from the western side instead of the main entrance. The temple architecture subtly indicates that here Manikkavacakar assumes a higher position than the gods; one has to go past his idol before paying homage to the presiding deity. 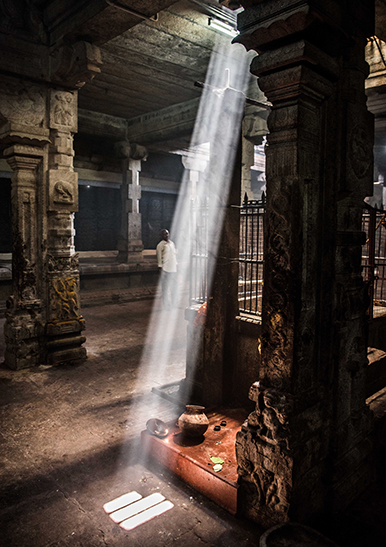 Athmanathar Swamy is an architectural marvel built in such a way that the setting sun’s rays strike the inner sanctum even though it is cloistered within three prakarams. The complex, which is spread over 10 acres, has seen many renovations since its founding and much of what stands today dates to the 15th century AD. Besides the shivalingam and Nandi the bull, other Shaivite staples like the Dwajasthambam or flagstaff and shrines to the navagraha or nine celestial bodies too are missing here. 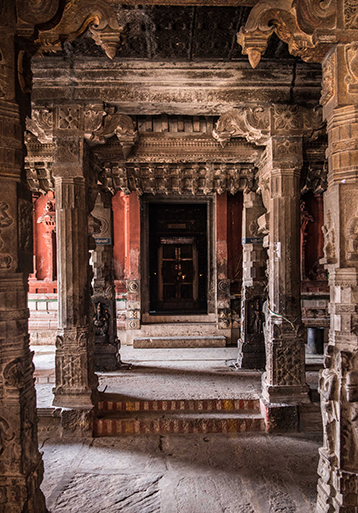 Athmanathar Swamy is known for its detailed granite work—the rafters, tiles, hinges and decorative nails are all made of granite. The ceiling design takes inspiration from the ornate wooden roofs popular in the surrounding Chettinad region. The temple’s passageways are decorated with sculptures created in the kodungai carving style, which involves carving under a stone so a sunshade-like shape forms over the subject. Some of the finest specimen of kodungai carving here include the sculptures of a bow-wielding Murugan and Shiva performing the rudra thandavam or dance of fury. Other figures, like those of the doorkeepers Agni and Agora Veerabhadra at the entrance are massive monoliths and samples of the region’s history of fine craftsmanship. 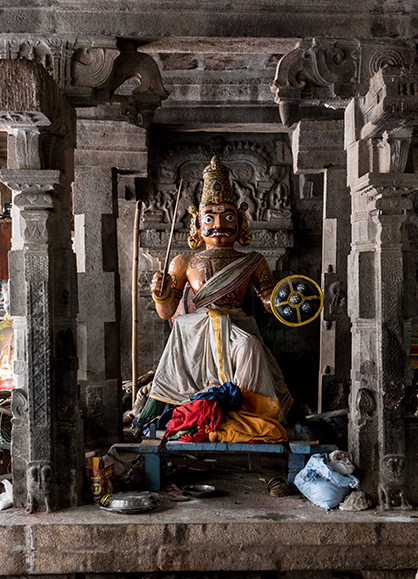 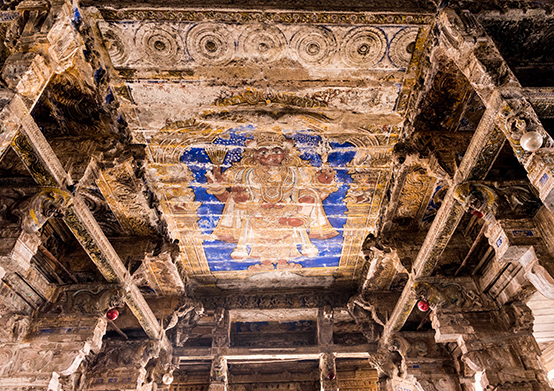 The Athmanathar Swamy Temple holds great significance for devotees, students of Shaivism, art historians and curious minds alike. It houses many legends and the echoes of a time when religion was a journey inward. The empty sanctum urges us to look within and seek out the truth that has elevated human spirit since time immemorial.

Kuhu Kopariha is an intern at Sarmaya