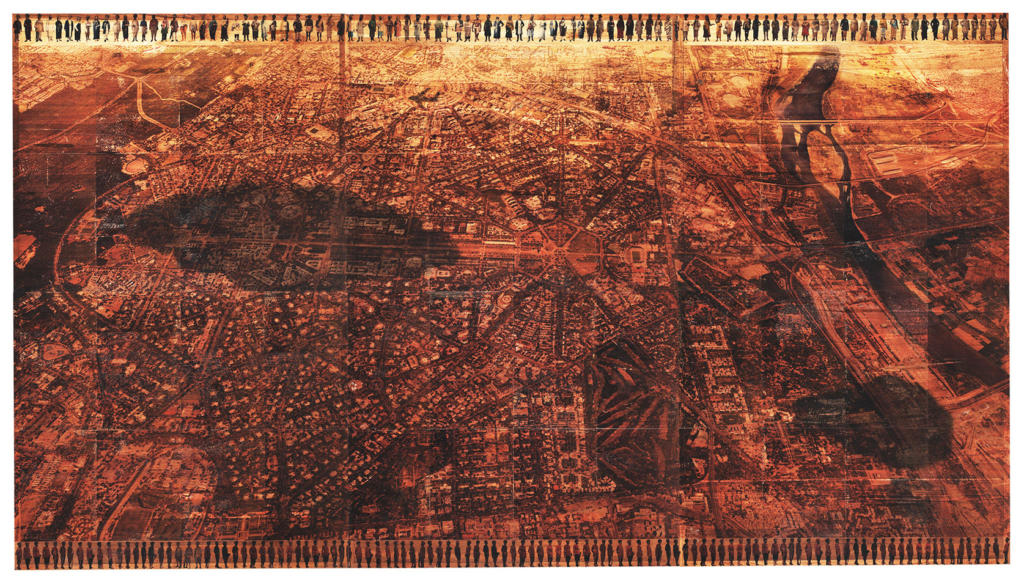 Saju Kunhan’s sweeping, panoramic 9-foot-wide view of Delhi in Cloud over the landscape calls to mind Nehru’s description of India as an “ancient palimpsest on which layer upon layer of thought and reverie had been inscribed, and yet no succeeding layer had completely hidden or erased what had been written previously.” The multiple histories of each element in Kunhan’s art finds expression on his canvas, whether it’s the archival images transferred from paper or the centuries-old teak wood panels onto which they are received. The artist is just as interested in what stays as he is in what—or who—gets left out at the end of the continuous process of displacement he practices as art.

“It is my general disposition,” says Kunhan, “to draw and colour over images. Photographs and maps represent moments in history—I destroy the moment, adding and removing layers of identity from it. In this work, I am rewriting history. What you see ultimately is my manipulated version of it.” On the surface, his journey as an artist seems planned and linear. A Bachelor’s degree from the Government College of Fine Art, Thrissur, followed by a Master of Fine Arts in painting from the Sir JJ School of Art, Mumbai, a project for the Kochi Muziris Biennale, a slew of group shows and a solo exhibition at TARQ in 2017. But the route to being an artist was a slightly more circuitous one for Kunhan. 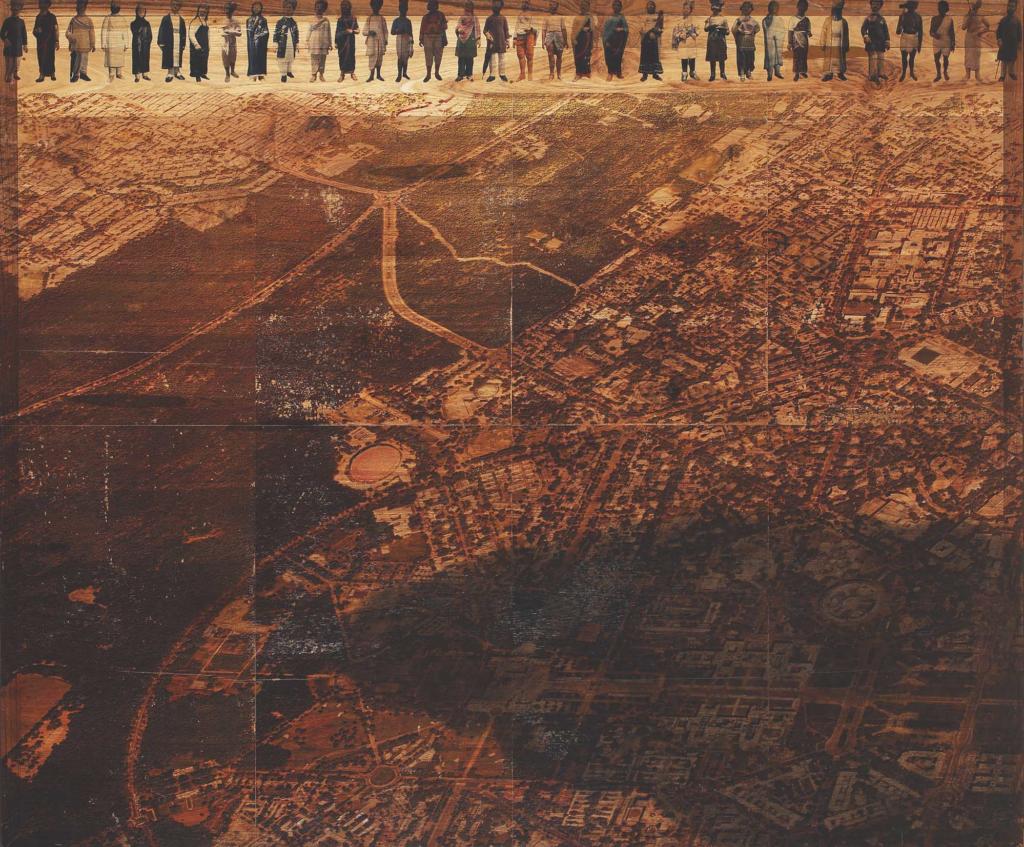 Growing up, Kunhan tells us, art was never really an option. “Most of my relatives work in agriculture or as daily labour so I had no connection with art. But in school, one of my art teachers discovered my interest and started giving me special training after school hours.” Despite this kind mentor’s support, however, Kunhan didn’t consider a career in art instead deciding to follow his siblings to Mumbai and focus on landing a job in design. But the city, its heady pace and a supportive community of senior Malayali artists changed that. 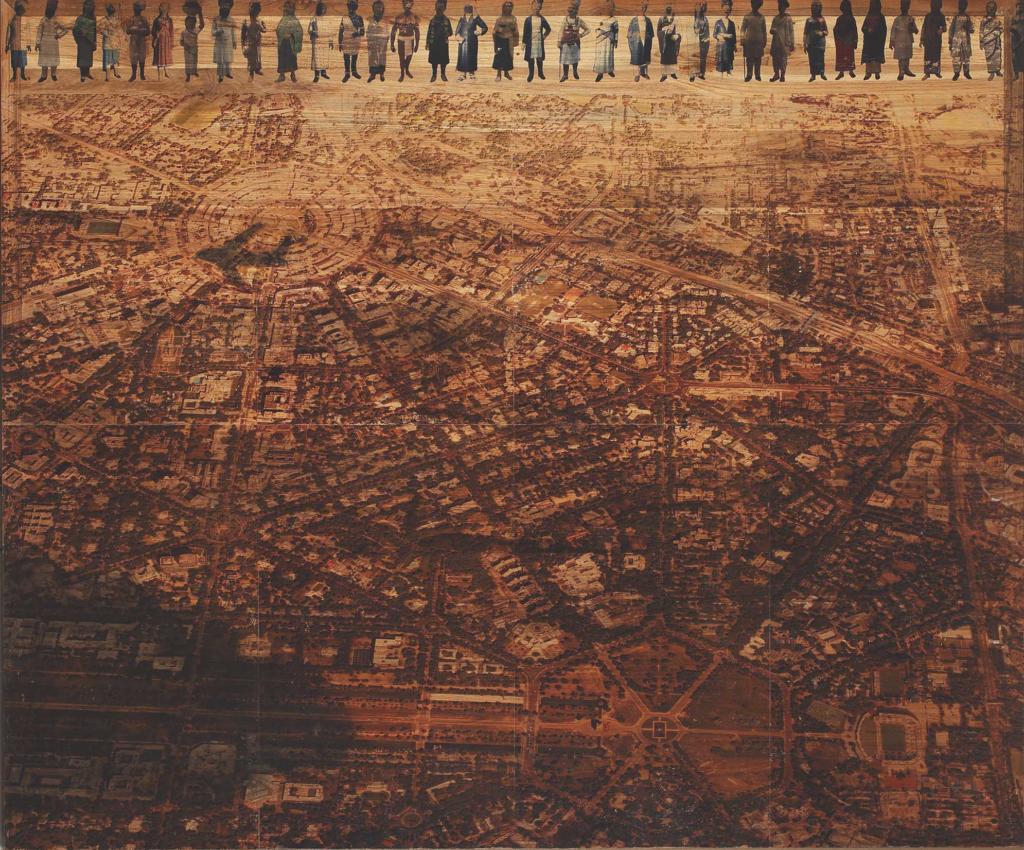 One of those artists took on Kunhan as an assistant and encouraged him to create art seriously. Living in the senior artist’s studio which was littered with remnants of his woodworking practice, he first started experimenting with wood as a canvas. Kunhan says, “Wood is a medium I have long been associated with, since as far back as my college days when I worked as a house painter. Transferring ink from one surface to another is a meditative process for me.” The teak wood Kunhan uses for his art is special for being highly recyclable and thus capable of holding many lives within its grain. “The recycled wood, which is nearly 200 to 300 years old, had an entirely different functional existence before. I want the unknown history of the medium, its feelings and emotions, to be a part of the artwork.” 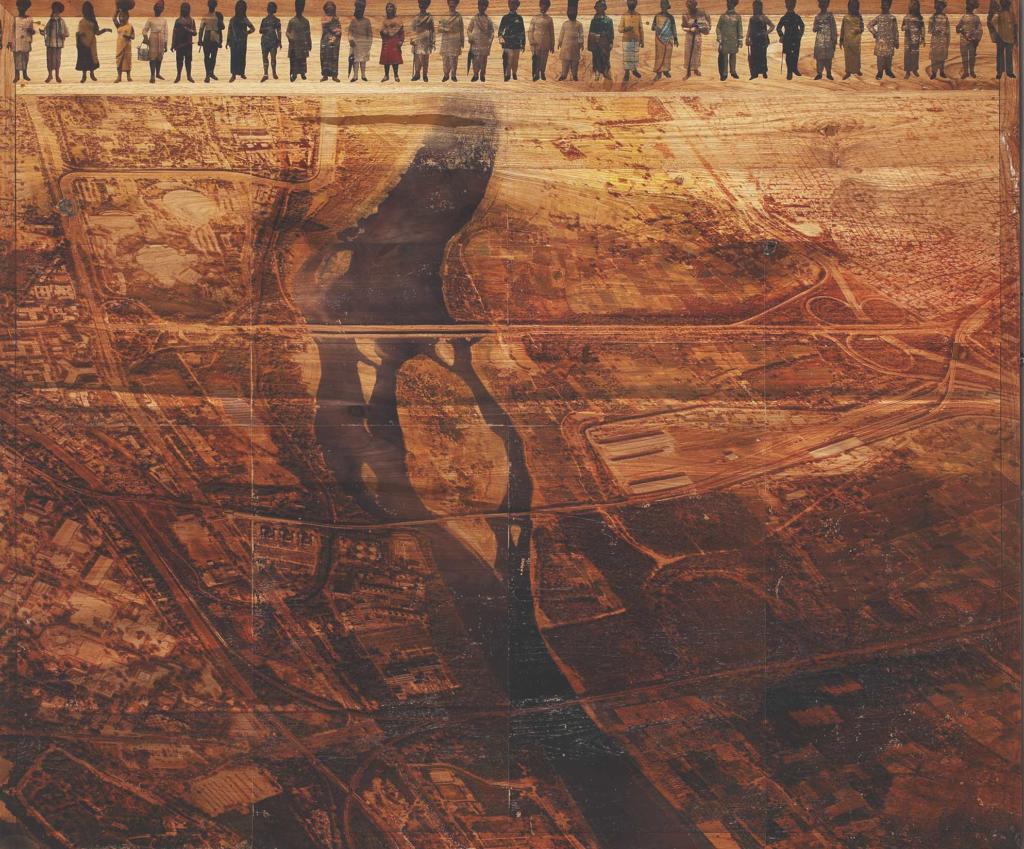 Kunhan soon became adept at transferring images from paper to wood, incorporating the imperfections caused by the knots in the wood into his vision. “In taking the printed matter off its natural habitat and transferring it from paper onto the wood, the essence persists even though the ink has lost its natural habitat of paper. How the ink gets adapts to its new conditions after being displaced is what you witness in the work.” There’s a clear parallel here with human migration, a subject that has long fascinated the artist. “I have been heard stories from elders in the family of my ancestors’ migration. Every species has a history of migration. In evolutionary terms, everything, including plants, move from one place to another over time. I wanted to show this in my works.” 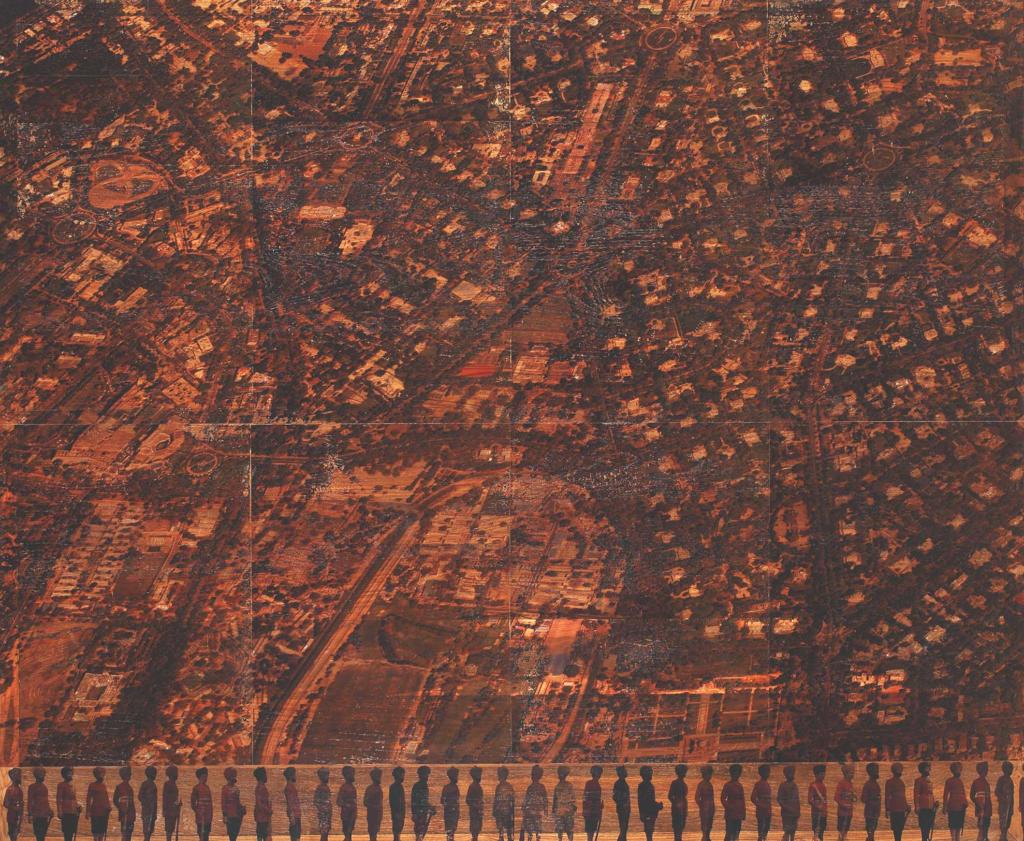 The distance traversed by the images is poignant to the artist too. While researching a project for the Kochi Muziris Biennale, Kunhan spent time handling old Malayalam periodicals over a hundred years old. This sparked an interest in archiving and on his return from Kerala, he acquired a diploma in museology and conservation from CSMVS Museum, Mumbai. The photos in Kunhan’s art come from old books and magazines sourced from the city’s flea markets, but the maps have a less poetic source. 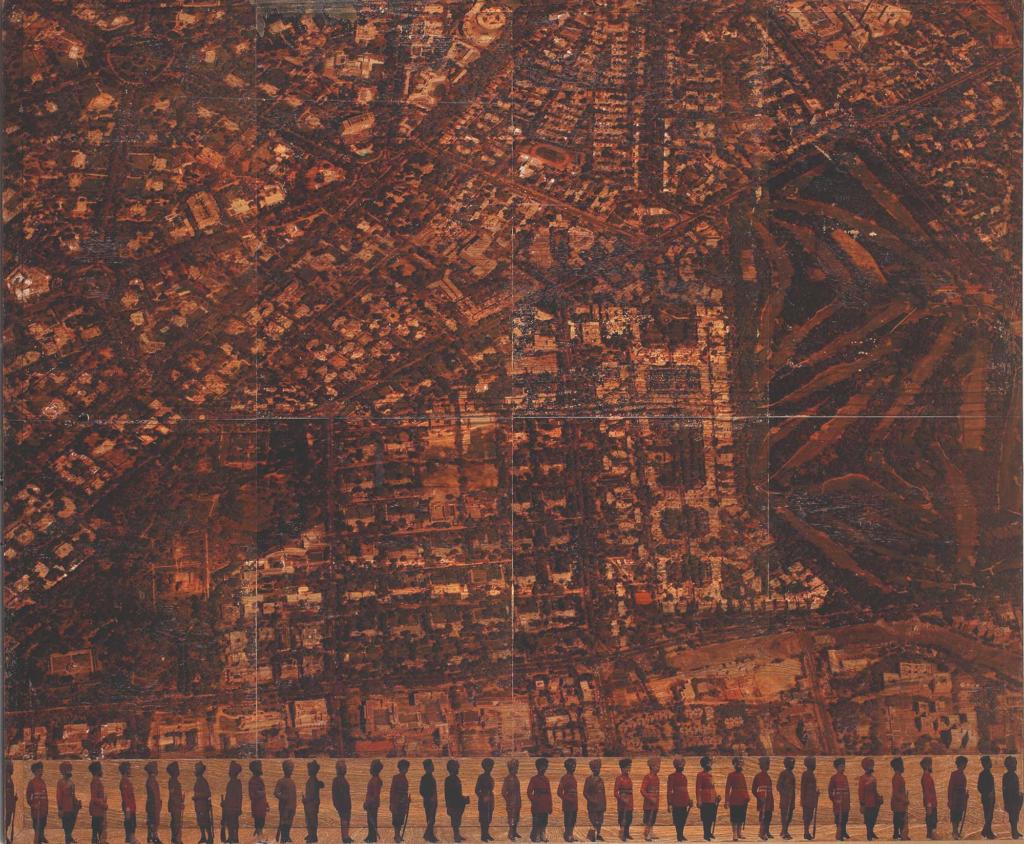 “I have a habit of visiting different places through Google Maps, especially areas of historical and archeological value. For most of human history, it was impossible to see or imagine what the earth looked like from above. Google Maps offer unlimited possibilities to navigate and explore the globe in that way. Maps gives me an understanding of the physical features of a particular terrain, as well as its vegetation, new developments, encroachments, people and borders.” Kunhan creates large scale maps like the one here of Delhi by stitching together hundreds of screenshots from Google Maps. Once the prints are ready, the artist might modify parts of it with paint or by burning or erasing certain sections, before transferring the ink from paper to wood. In the process of image transfer, some sections of the map vanish or get modified making the result impossible to predict or fully control. 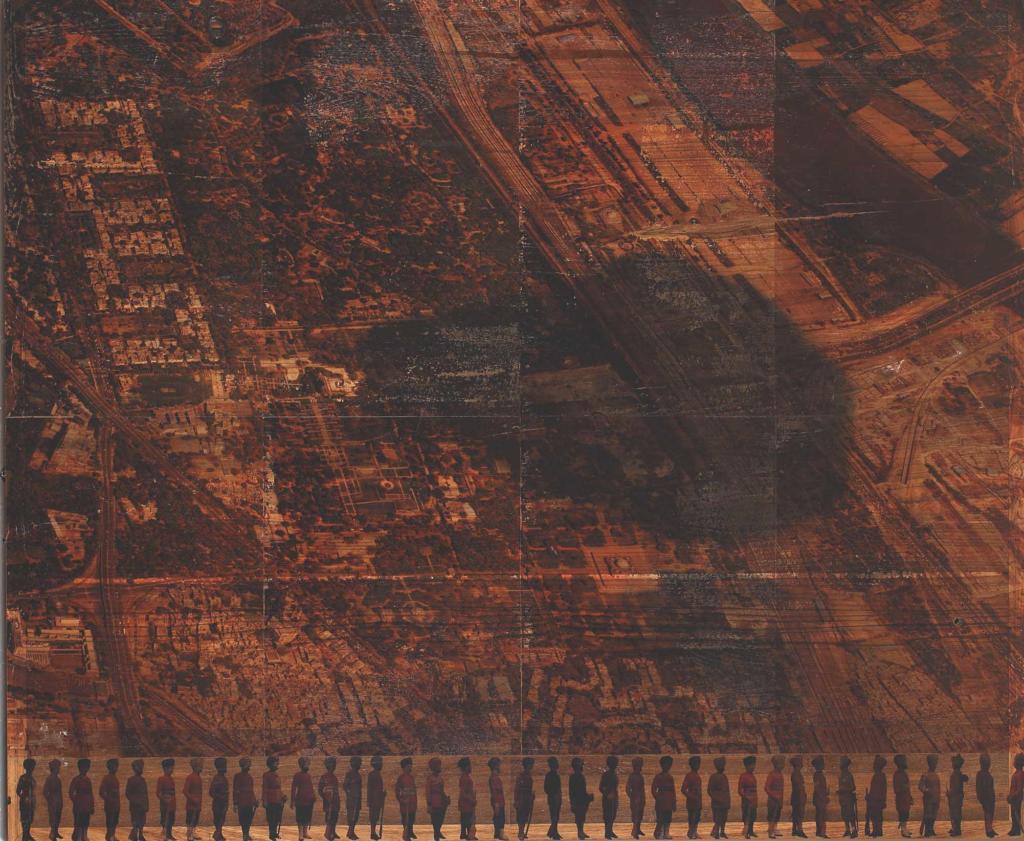 In Cloud over the landscape, which is part of the Sarmaya collection and our show Shifting Selves – Between meaning, mythology & mirage, Kunhan focuses on Delhi. The shadow of a cloud lays over the administrative regions of the capital, encompassing the Rashtrapati Bhavan, Parliament House, the South Block and the proposed Central Vista Project. This last detail was accidental as announcement of the Project came after Kunhan’s work was completed. The cloud represents the artist’s curiosity about the important decisions emanating from this political nerve centre.

Cloud over the landscape is made up of 6 wooden panels, and across its top and bottom run two strings of portraits. The top row has Indians dressed in various native costumes photographed full length as if for a colonial-era ethnographic project, the likes of which were very popular in 19th century. The bottom has images of soldiers. The form is influenced by Kunhan’s love for museum dioramas and these figures represent the plurality of our country. The twin rows also symbolise the twin functions of maps in history, as tools for the exploration of exotic lands, as well to protect and defend territory.

Walking the path of the historian, archivist and craftsman, and painstakingly recording the history of each element in his panoramic vistas, Saju Kunhan creates room for cultures, centuries and civilisations to constantly collide and create new meanings.