For someone who describes herself as at home anywhere but also nowhere, Rithika Merchant sees the realm of mythology as a common ground. Or as a sea of stories fed by rivers of culture from around the world. Merchant grew up in Mumbai, studied in America and lived all over Europe. The colours of Gond art, the figures of ancient Egypt and the stories of Greek mythology flower organically on her canvas, following her wandering eye as it pauses now on a yearning for utopia, now on a foreshadowing of dystopia.

This ambivalence is apparent in Gates of Horn and Ivory, part of the Sarmaya collection and our show Shifting Selves – Between meaning, mythology & mirage. Merchant says, “It illustrates this idea of [humanity] being at the cusp, where you can see these two different realities. If we do all the right things, we’ll end up this sort of paradise—but we can so easily just end up the other way, literally falling over this cliff into nothingness. One of the figures on the edge of the waterfall is a small boatman without an oar—that’s kind of where we are. Collectively, we have made really bad choices but maybe we can be ingenious and find some way to reverse the damage.” For someone of her generation—Merchant was born in 1986—the experience, she says, of contemplating the past and the future is bittersweet, the Portuguese word for which is saudade. That’s the title of the painting that won her the Vogue Hong Kong Women’s Art Prize this year at the 2021 Sovereign Asian Art Prize.

Merchant first hit the international headlines in 2018 when she started collaborating with the French fashion house Chloé. The folkloric quality of her art allows it to go across mediums and speak to a global audience. What it has to say is universally relevant too, whether about climate change or equality. This is why she avoids gendering or otherwise identifying in any overt way the figures in paintings like Harvest, Land of Plenty. “I’ve always wanted my figures to be free of gender and ethnicity. I wouldn’t want anybody to look at them and feel ‘that’s me’ because they are supposed to represent everyone. Because I work with myths and because I am interested in how we are all kind of the same.”

Merchant’s engagement with mythology is critical and subversive. She strips the patriarchal filter from these legends and uses them to investigate the human condition. Her figures seem to be playing witness to the monumental changes taking place in our current cultural, political and natural landscapes. This is best exemplified in the series Birth of a New World. “My work in general has always been a response to what’s going on in the world. Making art is the way I reconcile myself with what is going on around me. It almost feels like an act of self-soothing.” 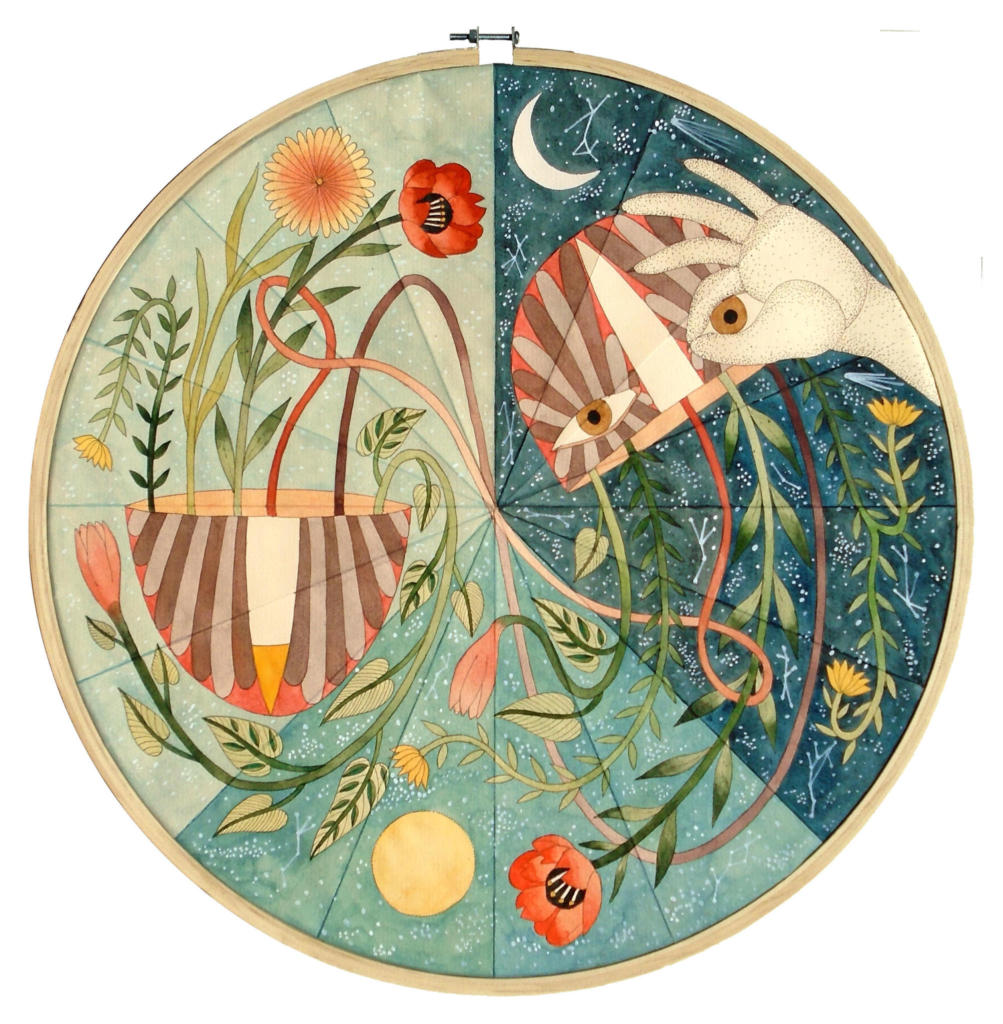 ‘Circadian Rhythm’, 2020, embroidery hoop with gouache and ink on paper, by Rithika Merchant — click for source

Through her process too, Merchant makes choices that flip the script. Birth of a New World incorporates craft in the form of embroidery hoops, and this is a feminist choice. “I started using embroidery hoops a while ago as a means to subvert the idea of women’s work. Embroidery, cross-stitching and things like that are relegated to the category of craft, which people don’t respect as much as they should. Using embroidery hoops in fine art practice was a way to reclaim that.”

The pandemic has led to a new experiment with paper-cuts. Merchant, who has a Bachelor’s in Fine Art from Parsons School of Design, New York, usually divides her time between Barcelona and Mumbai but the lockdown found her stuck in her hometown with an exciting possibility to unbox. “I was sent all this organic beautiful cotton rag paper by a friend Mia, who is the director of the clothing brand 11.11. Locked down in the beginning of 2020 and running low on art supplies, I started working with it. It’s so porous I couldn’t really use it to paint with and I have always loved the Hans Christian Andersen paper cuts, so I was inspired by that. It’s another way to use craft in my storytelling.” 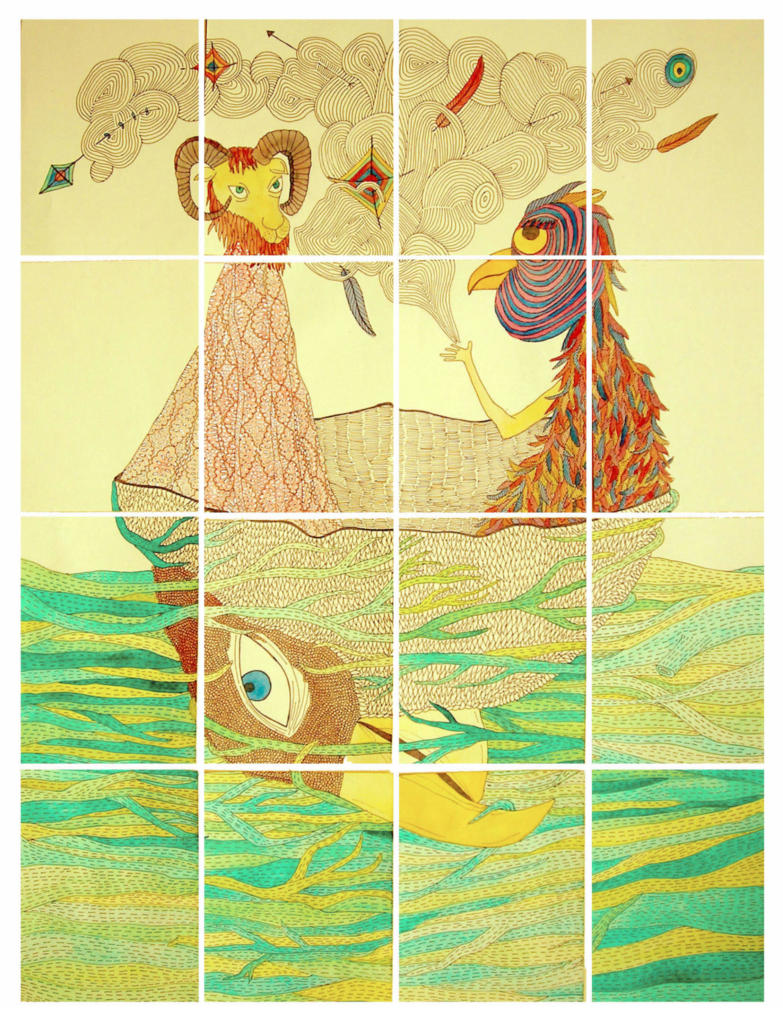 ‘Branches of Sea and Weeds’, 2012, gouache and ink on paper, by Rithika Merchant — click for source

Stories are what first attracted Merchant to tribal art, especially Gond. The influence is marked right from her 2012 collection, Origin of Species, which has a quality somewhere between primal and fantastical. She says, “Gond art is a huge inspiration, especially in my early work, and even now it’s definitely something I always take with me. I love the way they tell stories, the desaturated colours and the beautiful textures. It’s so interesting to me that each artist has their own signature pattern or texture. I think it’s really beautiful that mark-making is a link to the identity of the artist.”

The truth is we all look for ourselves in the stories we tell. In the show Shifting Selves, Rithika Merchant’s art represents this very human urge to mythologise our universe, to order it into a logical narrative so that its grand mysteries may be revealed in the retelling. So that as we narrate the tale of our times, we may find a clue to our own part in it.