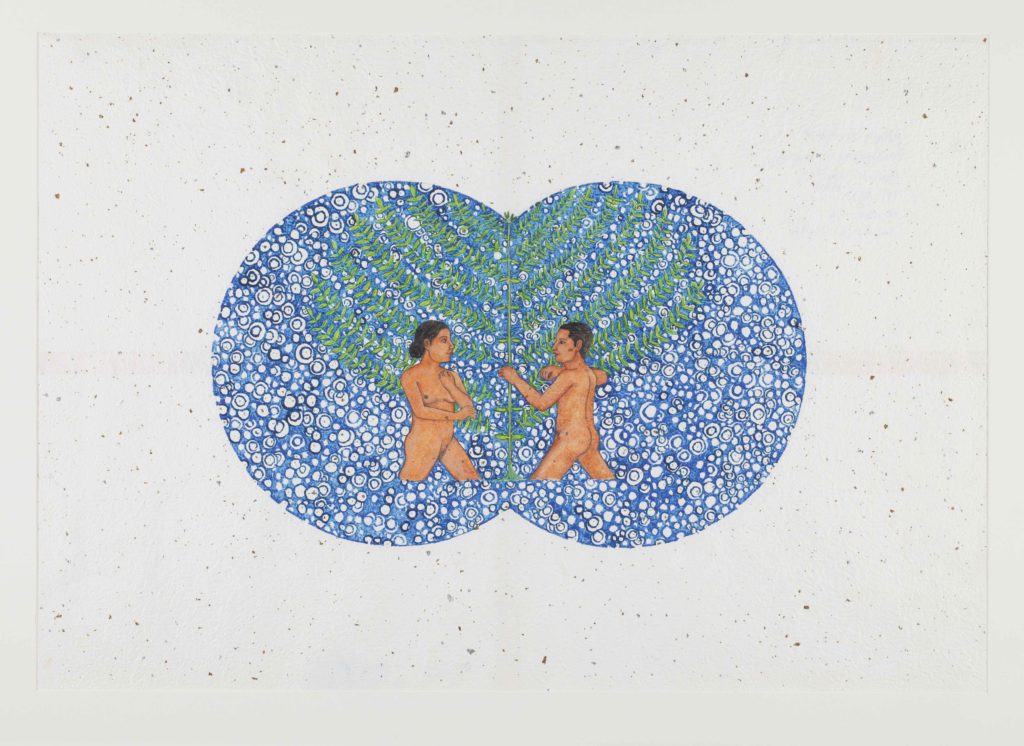 “Stories are the starting point for most of my art. My grandmother used to tell me a lot of stories.” This is how contemporary artist Dibin Thilakan begins to introduce his work. Sure enough, when confronted with Thilakan’s captivating canvases, even before having a conversation with him, I dive head-first into stories told by his sinewy figures, floating amidst ebullient swirls of colour. I am tasked with the joy of learning more about this young artist whose paintings are now part of Sarmaya’s growing contemporary art collection. Over the phone Thilakan seems shy but eager. “My art comes from an incredibly personal space — in essence, it’s fuelled by a perpetual curiosity about the human condition.”

For Thilakan, 2019 began with a showing of his latest series, Bonds of Lineage, at Tsomoriri Bunko, an independent art space in Tokyo. “I always wanted to travel to Japan. My close friend Keiko lives there and I wanted to explore in greater detail the works of Japanese masters like (Katsushika) Hokusai,” he says. The 30-year-old artist was born in Thrissur, Kerala. After graduating from the town’s College of Fine Arts in 2010, Thilakan collaborated with a Latin American theatre group, experimenting with various aspects of the performing arts. He then went on to acquire his masters in painting from the SN School of Art and Communication, Hyderabad University, and returned to Thrissur to establish his studio. “Most of my batch-mates migrated to art hubs like Mumbai but I decided to come back and settle down in Kerala. It’s so beautiful here,” he tells me earnestly, adding that there’s now a thriving arts community in the town that helps inspire and sustain his own practice. 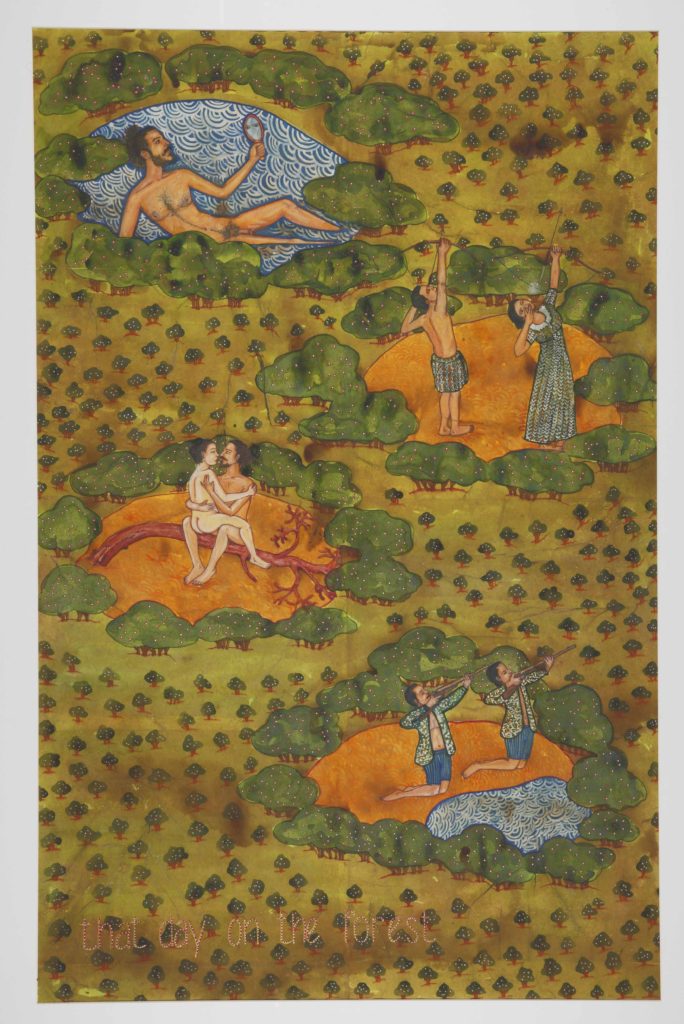 I can see how his art, while being rooted in Kerala, goes far beyond the topography. Unpretentious vignettes of people and daily life from his homeland are interspersed with deep, often surreal, enquiries into matters of the spirit. It’s refreshing to see that despite some of his work being disquieting, even melancholic at times, given the presence of a strong social discourse, it never once is cynical. His figures betray a deliberate naiveté but are never fetishised. One can tell that he draws from an unending feminine source — lush landscapes, pregnant women, goddesses and new births are recurring motifs. Thilakan works with a mix of gouache, water colours and natural Japanese pigments on paper. “I like for my figures to be a certain kind of opaque, so, they’re almost always rendered in gouache,” he says. Through our long chat, the artist very generously shares with me his early influences and the creative process behind some of his works:

Could you tell me a little bit about your family?

My mum is Roman Catholic and my dad comes from the Vilkurup community, who are traditionally construction workers. My parents are quite liberal and I was brought up with religious freedom. I have a sister who is five years older. My parents were quite busy making ends meet while I was growing up, as a result of which, I spent a lot of time with my maternal grandmother. She told me a lot of stories.

It started with the stories, I think — I listened to so many as a child. I am a ’90s kid and back then there were no mobile phones, there was no internet and in my life, specifically, there was very little television. We talked a lot. I also remember being really interested in Indian comics like Amar Chitra Katha and Tenali Raman. As I grew up, I started to sketch in my notebooks attempting to recreate portraits of celebrities from magazines. Then during high-school my art teacher encouraged me to try my hand at water colours. After I finished school, one of my sister’s friends suggested that I pursue fine arts professionally.

When would you say you found your rhythm as an artist?

It’s strange how this is such a definitive moment in my mind. My sister became pregnant around one of my college summer vacations and I spent a lot of time with her at home. I started to become acutely aware of a larger creative process that was afoot as she prepared to give birth. I made a portrait of her dressed in my mum’s nightie. That moment is pivotal in my art journey. You’ll find that image repeating in many of my works. 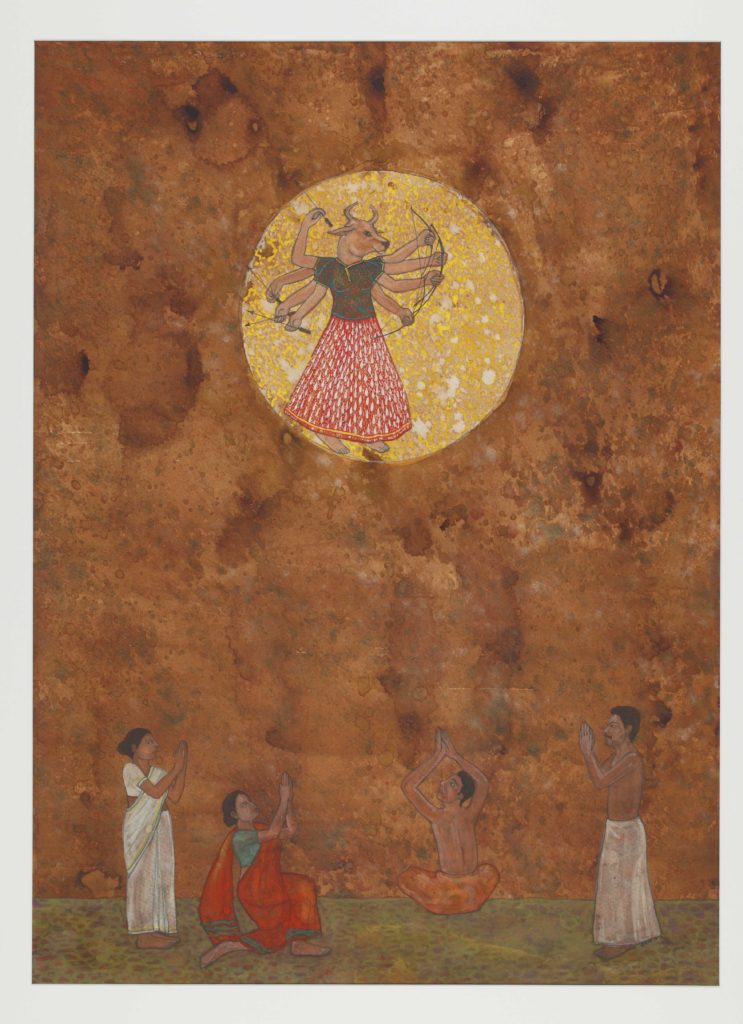 How would you describe your style?

My art has a strong narrative aspect to it which comes from my own childhood experiences. While it falls under the overall ambit of contemporary art, I intend for my work to communicate more directly with viewers. I am inspired by Indian tribal and miniature art, which are also two-dimensional, and also by Indian/Asian storytelling traditions. My art is so much about how people relate to it based on their own experiences.

Your paintings are peaceful to look at but there’s usually some tension brewing underneath. Do you intend for your art to be provocative?

I don’t intend for my art to be provocative for the sake of it. It really is a reflection of how I am feeling at the time. For instance, paintings in my series titled Relationship Riddles, show lovers in conflict, sometimes amongst themselves, and at other times engaging with the world around them. However, they’re also engulfed in an atmosphere of lovemaking and intimacy. I was interested in exploring these opposing forces. 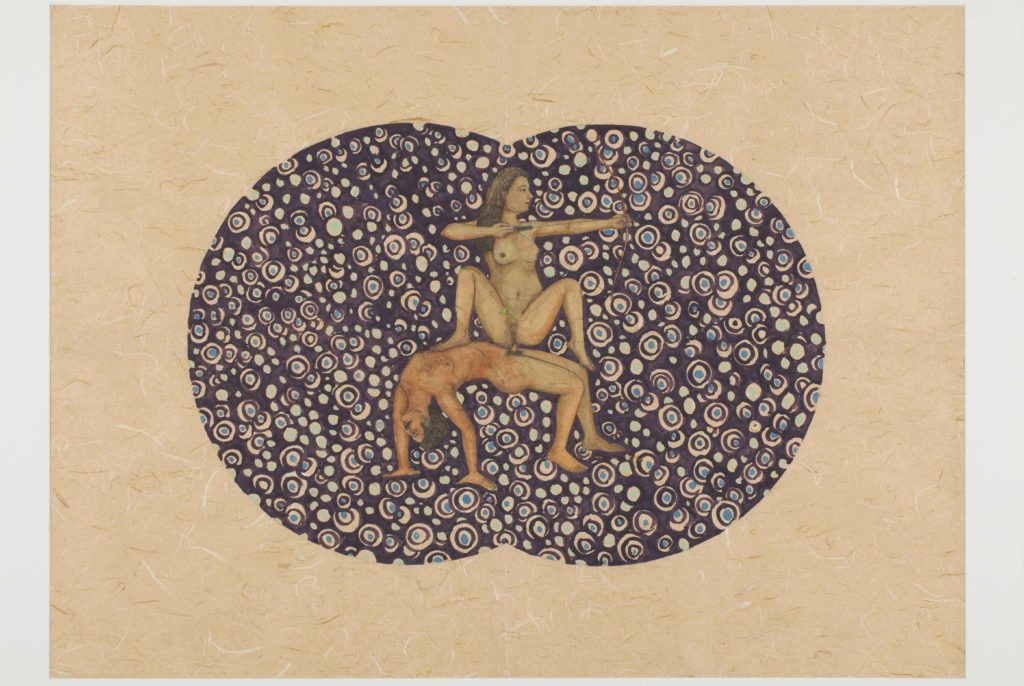 A couple of years ago, a close friend of mine committed suicide, and his death really shook me. I was suddenly confronted with the reality of life. I had to find a way to process those complex emotions. That’s how births, love, conflicts, deaths found their way into my work leading to my latest series Bonds of Lineage.

How does the natural and socio-political landscape of Kerala inform your work?

Social issues that surround me often find their way into my art. I recently made an artwork based on the infamous temple issue where women were not allowed to enter a particular temple. Women’s issues are close to my heart and these needn’t just be specific to Kerala—more often than not, their scope is much wider. However, I don’t seek to change society with my art. It’s a tool I use to communicate with the world and to express myself fully. 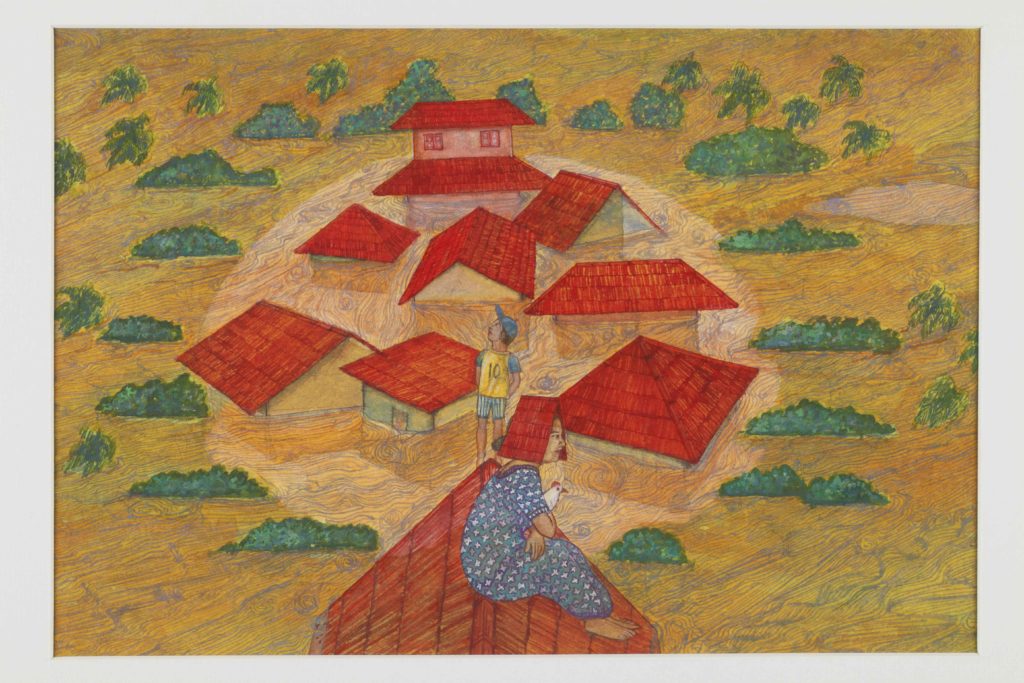 Another of my recent works is based on my memory of the recent floods in Kerala. I recollect being surrounded by water, not being able to go out anywhere and there being a scarcity of food and essentials. But I also remember people coming together regardless of their political and religious beliefs. The woman looking into the horizon— to me it is a symbol of hope during adversity. That Day in the Forest is a personal work that is also connected to morality imposed by society especially when one seeks to occupy public spaces. People always want to know who you are, who you’re with, what you’re doing there…Similarly, in the diptych titled Goddess Category/ Non-Goddess Category, I explore the dynamics of worship. I am amazed at how some things gets elevated to God status.

Clothing seems to plays an important role in your paintings. What’s the thought process behind dressing your figures?

These dress codes are informed by my surroundings. Most women in Kerala, especially pregnant women, wear these roomy maxis or nighties. Some of them wear saris and men are usually in dhotis. It’s the local casual wear. There is a certain intimacy and attachment conveyed through domestic clothes in the way they give us comfort. I intend to bring the same kind of comfort around sexuality with the nudes sprinkled across a lot of my work. In my opinion, most of the issues we face today, is because of sexual repression. 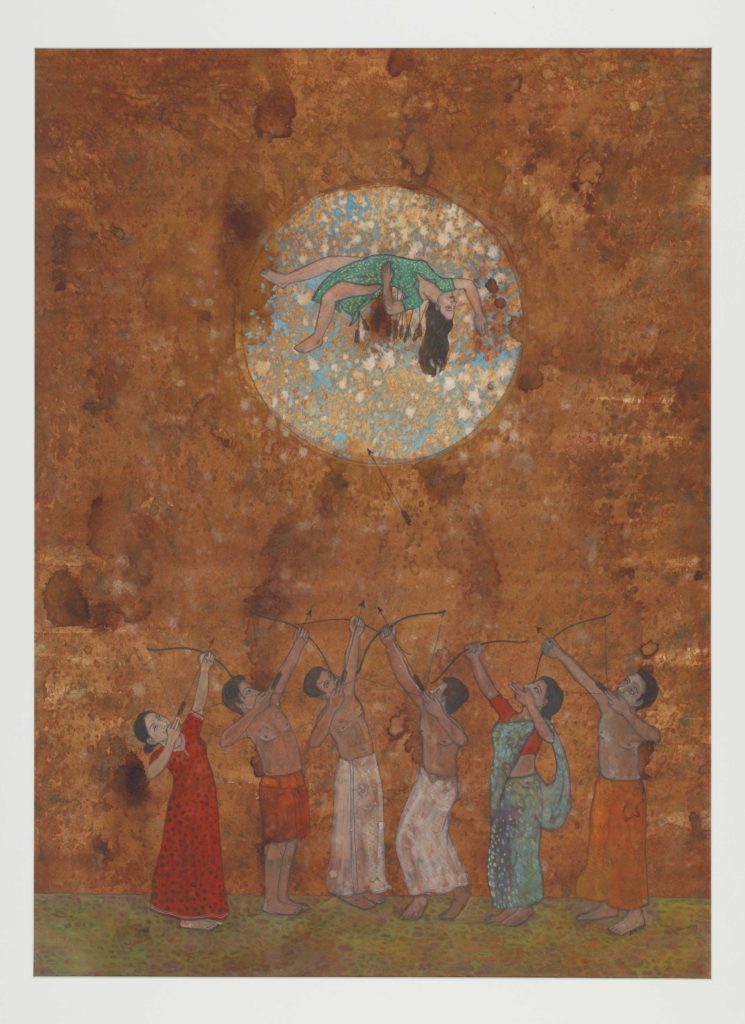 What are some pop culture influences that you recollect?

I used to listen to a lot of reggae. I was really into Bob Marley’s music and lyrics. Then it was the Doors and Jim Morrison. I now listen to classical music (laughs). I also like to read. On Beauty and On Ugliness by Umberto Eco have influenced me greatly. Among Malayalam writers (Vaikom Muhammad) Basheer and Kamala Das are my favourites.

What do you do to push yourself out of your comfort zone?

To escape the isolation of my studio I regularly conduct and participate in theatre workshops. Being involved with the performing arts keeps me sharp. I also love to regularly engage with people from the villages and not restrict my interaction to gallery-goers.

Would you say there’s humor in your work? What makes you laugh?

You’ll find elements of humour and satire in my work but this is not deliberate. I always let my art take the lead— it’s like a subconscious force. I don’t take myself seriously at all. I laugh a lot. People make me laugh. I almost got into trouble in Japan once for laughing too much.