Sometimes history can define us in ways that feel inescapable. As precious as they are to our identity, markers of memory can be painful reminders of a self we would rather leave behind. Is there a way to return to the site of that pain and reclaim our power? Saubiya Chasmawala’s haunting, hypnotic art attempts a revision of exactly this sort.

In Pilgrimage of Historical Oversight, Chasmawala’s debut exhibition in 2017, a set of photographs from her family archives are presented with sharp and imaginative interventions by the artist. The images are mostly from a set taken by her father, who keenly documented the family’s pilgrimages onto Yemen, Iraq, Iran, Saudi Arabia, Syria, Israel, Jordan, Palestine and Egypt. He planned the trips diligently, drew up rigid itineraries shepherding the family from one religious site to the other, and meticulously photographed these moments, even dictating who stood where and how. Years later, Chasmawala examines her memories of these travels and feels conflicted. She is privileged to have visited parts of the world that aren’t easily accessible to travellers today. Yet, her knowledge of these countries is restricted solely to the sites listed in her father’s itinerary. And so, while she visited Egypt, she didn’t get to see the pyramids.

Chasmawala, who is part of the Alavi Bohra community of Gujarat, sees these photos as reminders of a man’s attempts to control the spaces inhabited by the women in his family and her artistic interventions address exactly that. She has scratched out her face from some of these photographs printed on paper, such as the Untitled piece in Sarmaya’s collection. This violent erasure evokes a strong sense of discomfort in the viewer. Yet it registers as a strong response by the artist to the original erasure of her true self from these souvenirs. Quite a few of the re-imagined photographs from Pilgrimage of Historical Oversight show groups of people, presumably members of her family, assembled in front of tombs, mosques or framed by a stretch of a desert landscape, with their faces either scratched off or obscured with whitener or paint. Chasmawala writes over the photographs, pastes thread, and paints over some with poster colour, ink and saffron. These are a means for her to process and reclaim her family history. She says in a video for TARQ, “Painting over these photographs allowed me to depict my version of these photographs, and the spaces and stories of my childhood”. 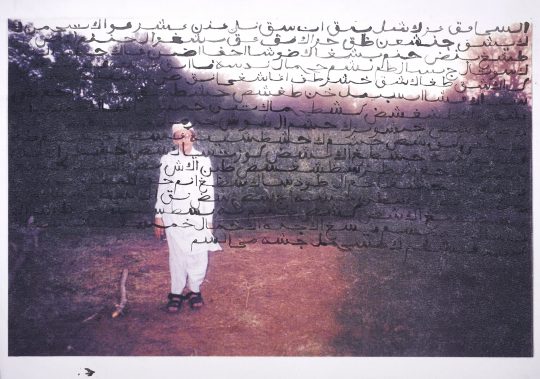 Process is central to Chasmawala’s work; the making of her art is the whole point of her art. As part of her practice, the Baroda-based artist whose works are part of our show Shifting Selves – Between meaning, mythology & mirage, undertakes introspective journeys to understand herself and her experiences better. Chasmawala completed her Masters in Visual Arts from Vadodara’s Maharaja Sayajirao University, with a specialisation in painting. She later interned at the Nirupama Akademi, Kolkata under the paper artist Anupam Chakraborty. Paper is her medium of choice because it lets her get involved in its making.

Another troubled childhood association was the fuel for Batin, Chasmawala’s second solo exhibition held at TARQ in 2019. In it, letters from the Arabic script are repeated on paper until they appear as meaningless abstracted forms. Chasmawala’s relationship with the Arabic language is rooted in the verses of the Quran that she grew up reciting, often without entirely understanding the meaning. When she charts out their abstracted versions repeatedly using calligraphy tools and ink or natural dyes, she is revisiting her history with these verses, the language, and her religious identity at large. “I drew these letters repetitively to connect with their energies in order to heal my relationship with the language,” she tells TARQ. “It allowed me to reconcile with my cultural past.”

Hena Kapadia, founder of TARQ says, “In this exhibition, Chasmawala worked to further develop her engagement with Arabic script, pushing the boundaries of abstraction. She layers characters to obscure the rigidity of their form, moving further away from her older, representational works. I think these works are born out of a desire to demystify, to unveil, and are the results of an intuitive, introspective, almost meditative mark making process.” Batin is Arabic for ‘inner’ or ‘inward’, but Chasmawala’s process is as gestural and expressive as it is intuitive and inward-looking. In the catalogue for the show, writer Skye Arundhati Thomas describes the artist’s process: “…she walks all over the work, she sits on it, she moves against and alongside it. She is an action painter, a new kind of expressionist.”

Three works from Batin, Untitled #11, Untitled #54 and Untitled #55, are part of the Sarmaya collection and our show Shifting Selves. Her movements are neat and rather contained in these works which are approximately 8 by 12 inches in size. Here, she is getting to know the characters. In the TARQ video, she says, “I repeatedly drew them to understand how painting certain characters involve certain gestures.” She uses this intimate knowledge and takes off on a journey of deconstruction and discovery with the second set of works – large, unframed ones painted on cartridge where her movements are visibly unrestricted. In these, the characters appear raw. They are sized approximately 36 by 98 inches, and there are tears on the paper owing to the severity with which she has created them. “It was not about getting the accuracy of the form of the letter, but about how one kind of movement was paving the way for the next and how this rhythm that it created allowed me to purge…. it transformed me and helped me to release emotions that may have been repressed.”

In that sense, Chasmawala’s art is almost a cathartic ritual, a sort of prayer. A stream of consciousness that investigates the ruptures of the past and doesn’t rush to soothe them, rather folds their jagged edges into a meditative practice that allows them to acquire new meaning.