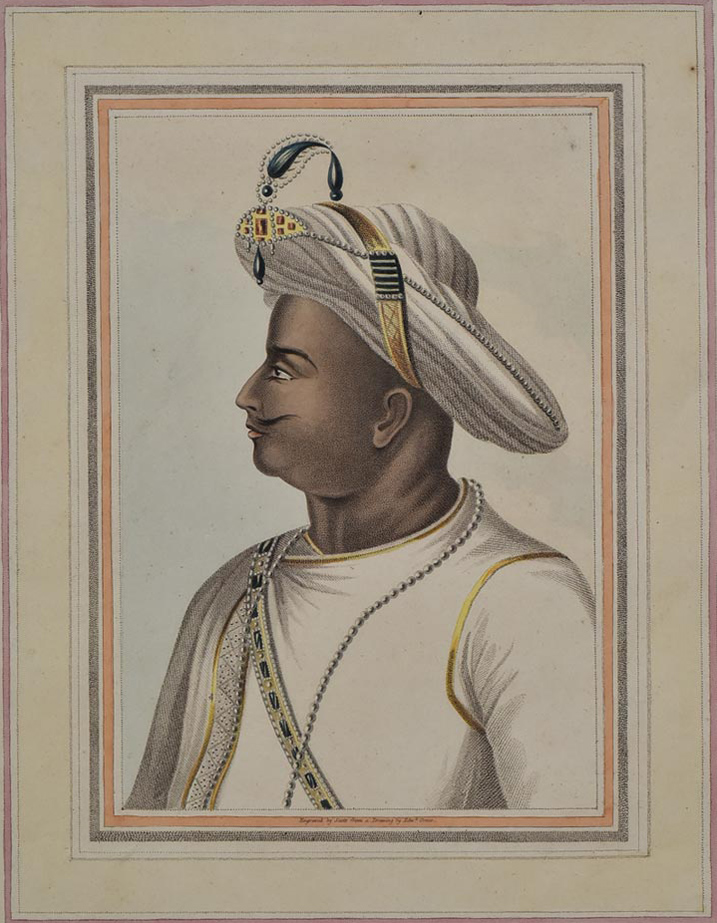 Towards the middle of the 18th century, the political situation in India was in a state of flux. In the north, the Mughal Emperor was reduced to a mere figurehead after Nader Shah’s sack of Delhi. Roving bands of Maratha horsemen were collecting Chauth and Sardeshmukhi tributes (types of tax) from the numerous chieftains who had declared themselves quasi-independent of the Mughals. They were even raiding states down south, where one of the smaller kingdoms, Mysore, had emerged from the ruins of the Vijayanagara empire and moulded itself into a small, dynamic Hindu state. The Wodeyar kings, who had been ruling Mysore for over 300 years, were only nominal rulers by this time and actual power was wielded by their prime minister, or ‘dalavai’.

By 1760, Tipu’s father, Haidar Ali had eased himself into the title of Sarvadhikari or ‘regent of the kingdom’ by taking advantage of his close connection with Mysore’s then dalavai, as well as using prudence, tact and bravery in battling the Marathas and the British. After Haider’s death in 1782, Tipu took over his father’s position with the fait accompli of his father’s closest friends in court as well as the acquiescence of the local populace, who had by then come to see a stronger and more prosperous Mysore under Haider and Tipu. The series of four Anglo-Mysore wars, which began in 1767, had propelled the hitherto unknown kingdom of Mysore into the notice of the powder rooms of Europe and America. The first war saw Mysore dictating terms to England at the gates of Madras with a 17-year-old Tipu scaring the British Governor of Madras into fleeing his country house on a boat; the second war was Tipu’s brightest moment. At the battle of Pollilur in 1780, the sun shone brightly from the flag of Tipu’s Mysore and visited the worst disaster ever to befall an English army in India. Out of 3,000 men in the British army, only about 400 survived. 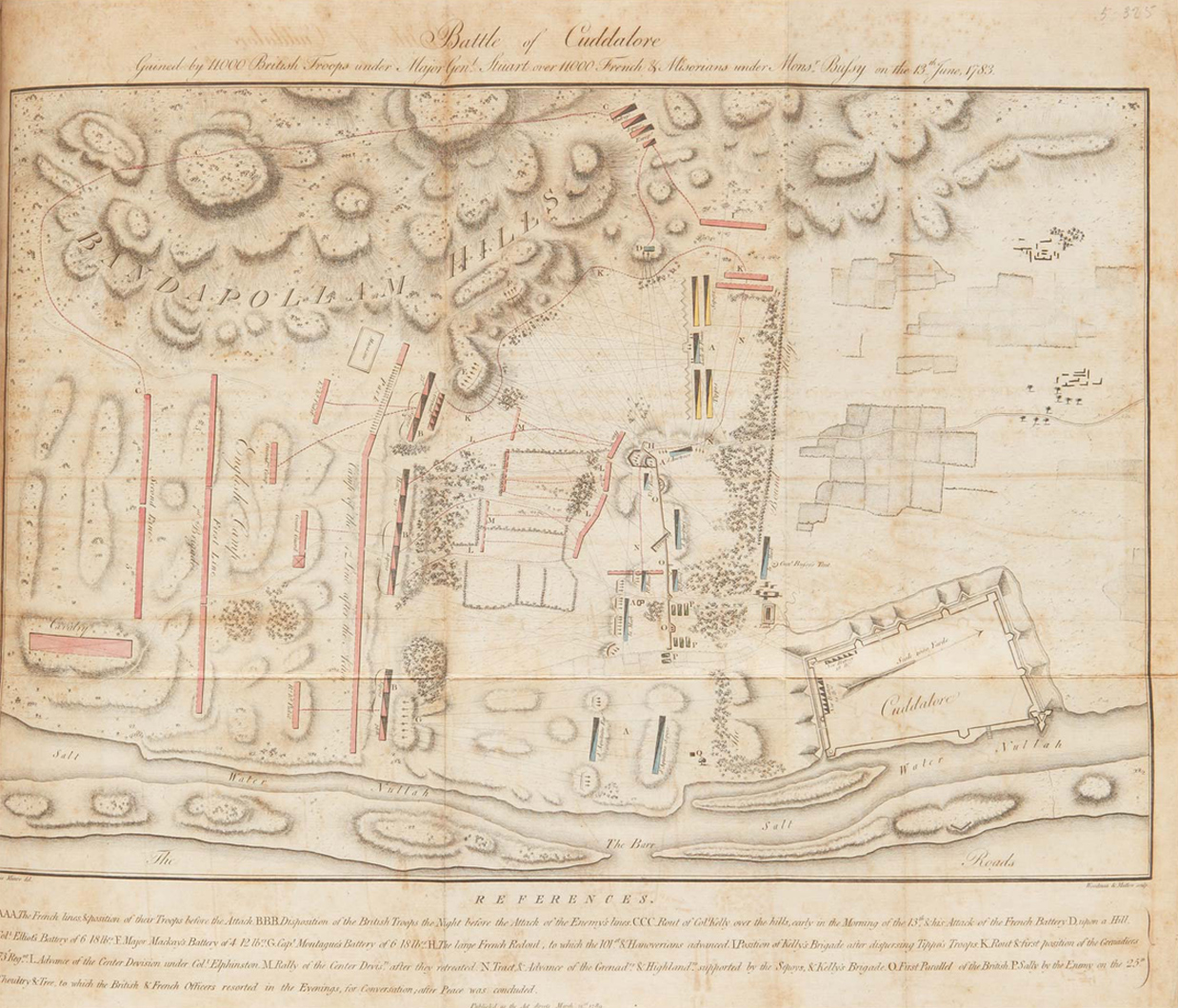 Battle plan from the book ‘A Narrative of the Military Operations on the Coromandel Coast Against the Combined Forces of the French, Dutch and Haider Ali’

By 1785, one in seven Englishmen in India was Tipu’s prisoner. With the last two defeats fresh in their minds, the English began a vicious diplomatic campaign against Mysore, which stood as a bulwark against Britain’s expansionist drive across India. What rankled them even more than the defeats was that here was a native ruler — or ‘despot’, as they branded all of them — who was different from the others. He did not while away his time in pleasure, nor leave the management of state to some palace coterie; and not once did he ask the British for help against his neighbours. And they failed to acknowledge that if Britain, a small ‘island of shopkeepers’ as Napoleon once termed it, could come to be seen as the birthplace of the world’s largest empire, then so did Tipu have the moral right to attempt to catapult his Mysore onto the global stage.

He took advantage of the enmities being played out in Europe, recruited the French as willing allies and drilled his army in modern European maneuvers. He was so successful that once in Istanbul, the Ottoman sultan went incognito to study a troop of Mysorean infantryman at their drill. Mysore was the first state to demonstrate the efficacy of rockets in war by modifying what was until then a mere firecracker into something that could carry a sword or wooden blade. Tipu once sent back French weapons to Pondicherry with a letter stating they were substandard compared to the indigenous ones in his arsenal. After Tipu’s fall in 1799, armaments that carried his tiger-stripe or ‘bubri’ seal were eagerly sought by European collectors as well as the English King for their beauty and power. 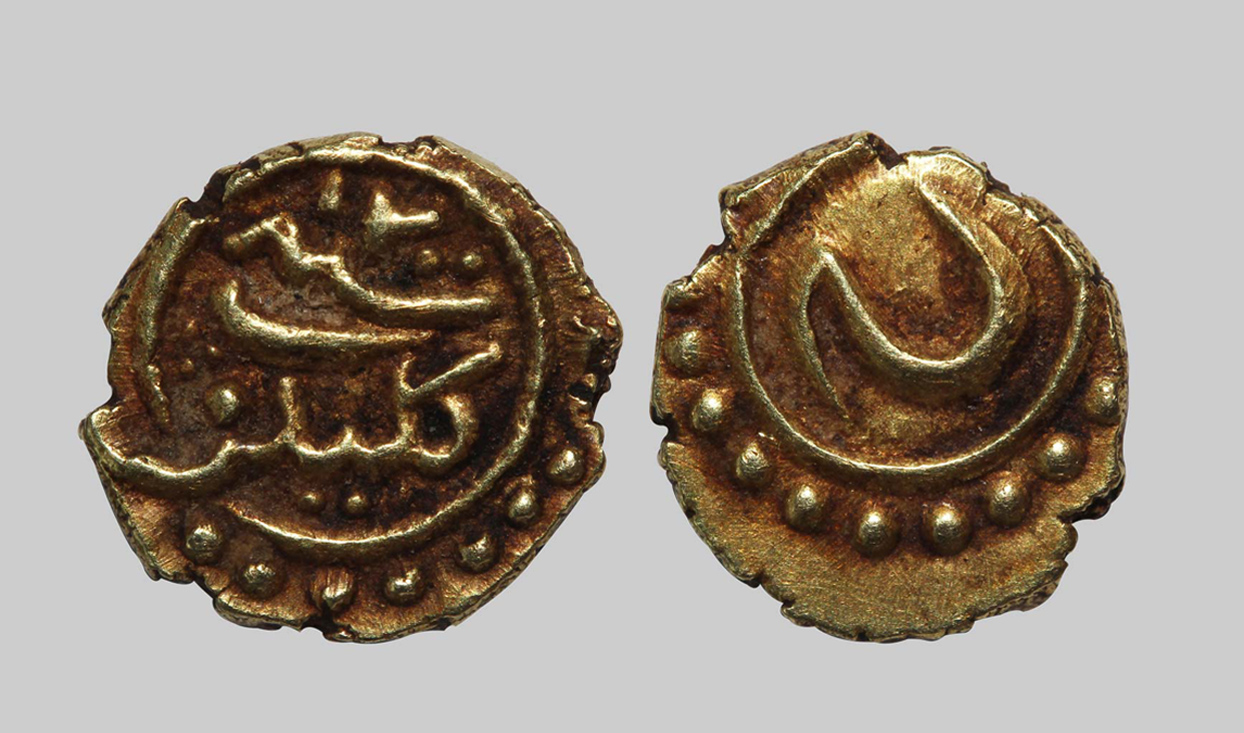 Working almost 18 hours a day, he kept meticulous records of revenue and personnel across his kingdom. Tipu created a set of revenue regulations that rationalised land taxes and even offered subsidies to farmers if they brought more land under cultivation. Tenant farmers were well taken care of and their rights respected; landowners with excess land were asked to surrender them to their tenants. He created a navy that sent ships with his diplomats to meet the Ottoman sultan in Constantinople and the French emperor in Paris. An elite group of Brahmin civil servants was nurtured during his early rule to make sure revenue was properly collected. His forts were among the strongest in south India and his currency so beautifully minted that the Mughal Emperor felt slighted at receiving coins more beautiful than his own. He even minted coins with Hindu deities on them. Even in the midst of war he wrote of receiving silkworms to create the silk factories of Mysore. Sugar and paper factories were established for the first time under him. He was also liberal with gifts to Hindu religious establishments in Mysore and Malabar too, once he’d subdued it.

The third Anglo-Mysore war in 1792, with Cornwallis at the helm of the British army, did not go well for Tipu. He was hard-pressed by the British-Maratha-Nizam allied powers to surrender half his kingdom, submit to a war indemnity of ₹3.3 crore and deliver two of his sons as hostages to the British. Thanks to his financial prudence, he managed to pay the British their ransom and have his sons released a year earlier than the stipulated three years. But the period between 1792 and the fourth war in 1799 was one of great tribulation for Mysore. Rebellions raged and finances were tight, thanks to the indemnity paid. However, to Tipu’s credit not once during his rule, and even in the midst of almost incessant war, did his subjects suffer from famine or pestilence. At the same time in British Bengal, millions of Indians perished in a famine. Tipu’s fiscal prudence was far ahead of his time and worthy of admiration and emulation. 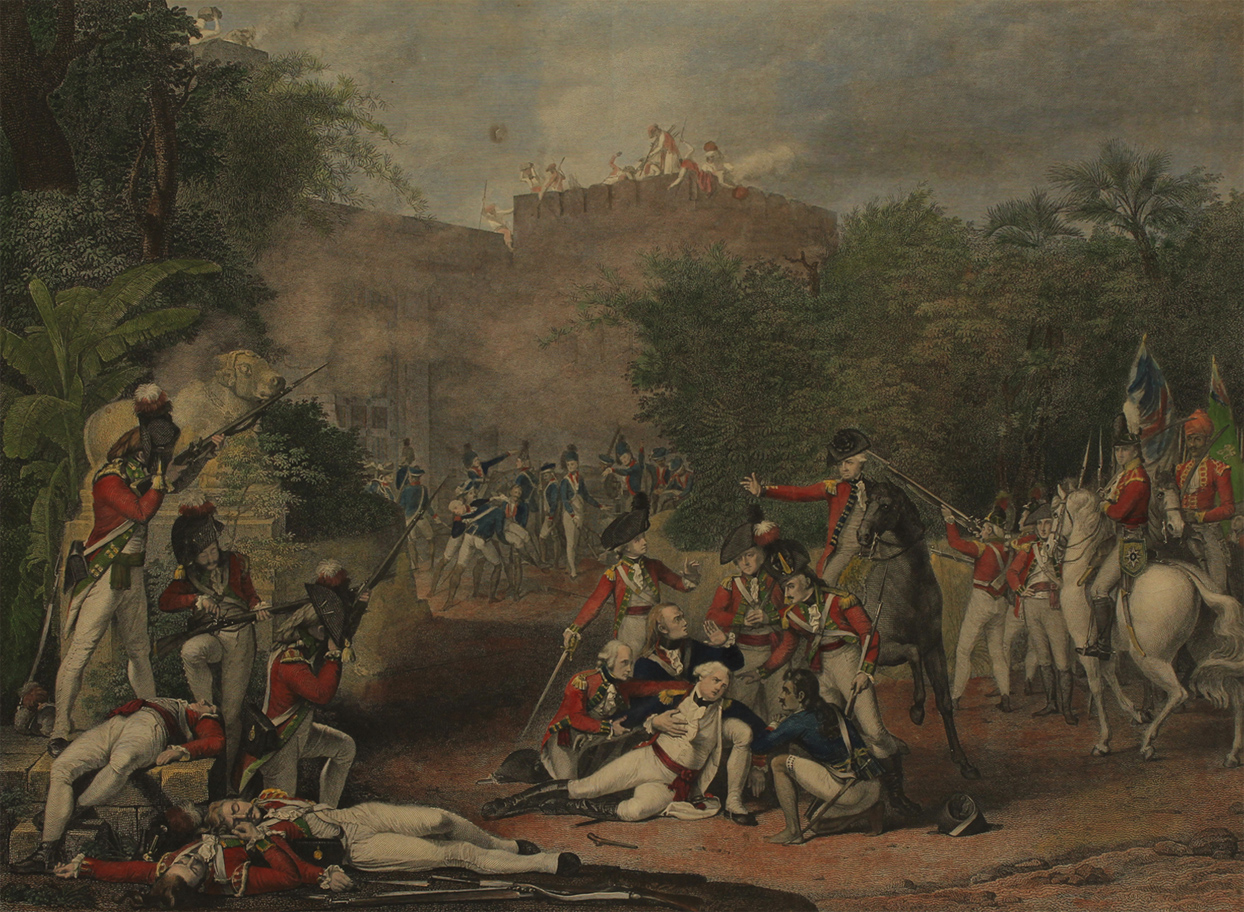 The Death of Colonel Moorhouse during the third Anglo-Mysore war, an engraving by Robert Home

But he had another, darker side, one that not only plagues his legacy but, in my opinion, also hastened his downfall. Tipu was a man who pushed his ideas faster than his people could digest. He considered his kingdom to be ruled by ‘sarkar-e-khudadad’ or a ‘god-given government’. He envisioned Mysore along the lines of a benevolent Islamic state, with Muslims being first among equals.

During the second half of his reign, Tipu suffered constant dread that the Hindu elite would support the Wodeyar dynasty and oust him from power. This led to him favouring Muslim subjects when it came to filling government positions. The largely Brahmin clerical cadre that worked hard to create a successor state to the mighty Vijayanagara started feeling sidelined. Though the middle and lower administrative hierarchy as well as his army was largely Hindu, an observation of the civil lists showed a preponderance of Muslims in all the higher positions. Apologists of this policy liken it to the affirmative reservation policies being practiced in modern India, but the fact remains that Tipu caused many to lose their traditional jobs.

Not only that, Muslim householders also paid less tax compared to Hindus. Muslim schools were subsidised and active efforts were made to induce non-Muslim householders and farmers to embrace Islam. While it is true that he did not interfere in the rare instances when a Muslim embraced another religions, his own attempts at proselytisation led to him being seen as a ‘Muslim’ ruler, especially towards the ends of his reign. 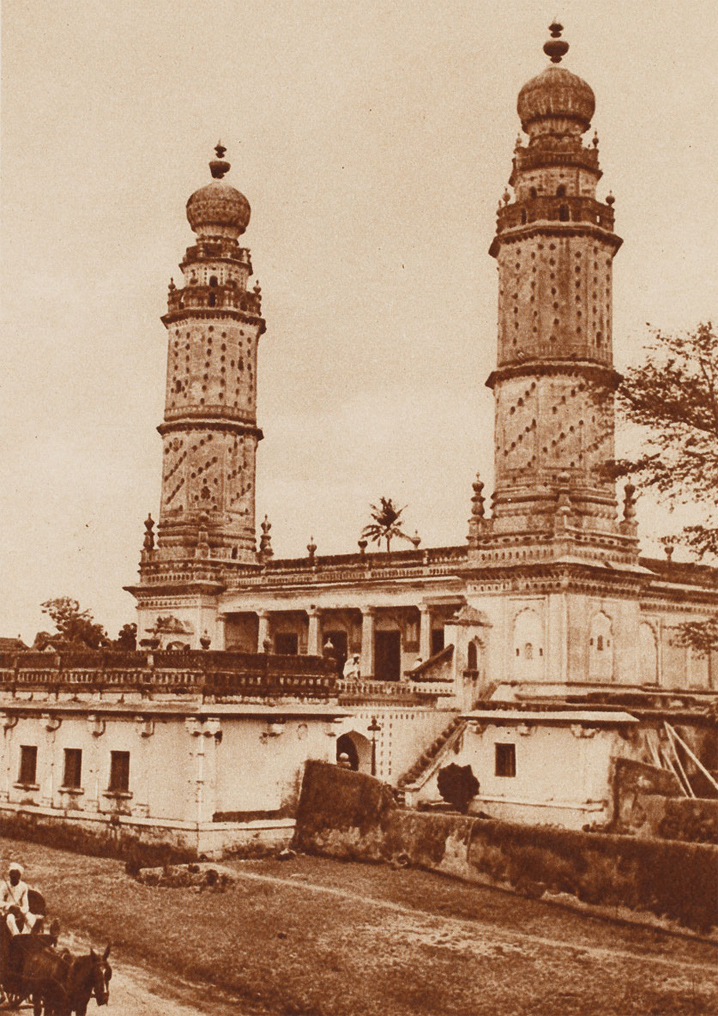 The Mosque of Tipu Sultan at Srirangapatna, a photograph by William J Johnson and William Henderson

Persian was made compulsory in Tipu’s Srirangapatna court, even though Kannada was also retained at all secondary levels. Names of towns in Mysore were Persianised as well. All this naturally led to a sense of alienation among the scribes and courtiers who were not conversant with Persian, which was then the lingua franca of the elite through most of the subcontinent. That the Wodeyars who followed Tipu also continued to use Persian as one of the languages of court does not take away from the fact that the mother tongue of the large majority of the people Tipu ruled was not given administrative precedence and was relegated behind a foreign language.

Campaigns in Malabar and Coorg were called, in Tipu’s own words, ‘jihad’ and prisoners taken in battle converted en masse to Islam. Coorg was left virtually desolate in the period of Tipu’s rule. One may argue that the times were different, and that the forced conversions happened only outside Mysore, in Malabar and Coorg, and then only in cases of treason so the rebels would become sympathetic to the views of their new rulers. But one would expect that for someone with his worldview, Tipu would inculcate a similar modernity in his theological thoughts too. It was, after all, the age of Enlightenment. Tipu’s friend and contemporary Napoleon had already emancipated the French Jews, even at the risk of discord with his church. 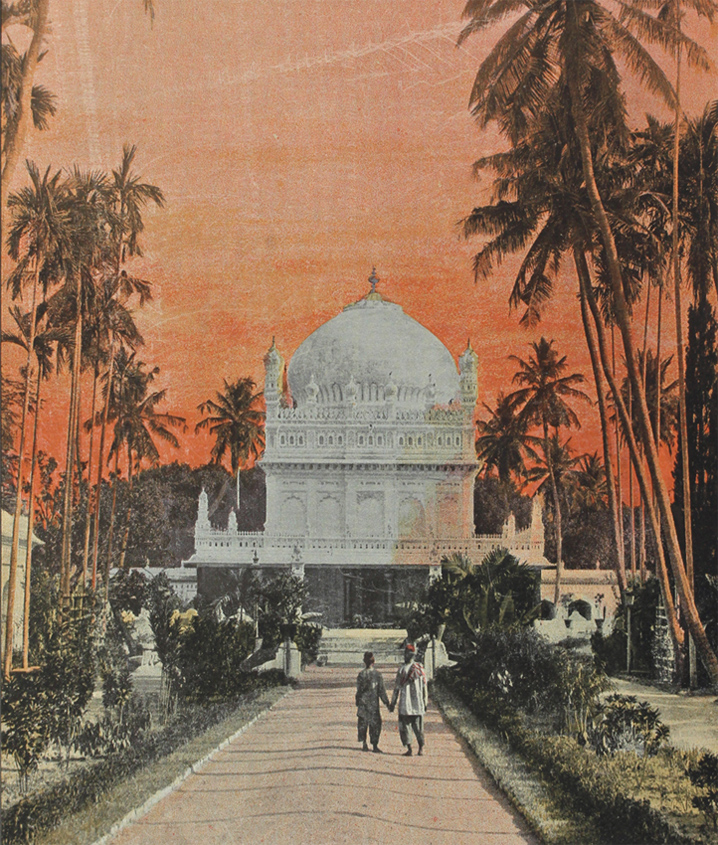 Tomb of Tipu Sultan and Hyder Ali, Mysore, engraving after an original photograph by Bourne and Shepherd

It will be unwise to measure Tipu’s shortcomings by holding the candle of 21st century morals to his face. British propaganda after his fall ensured that the period of his reign got an adverse mention in the history books they wrote and this was later lapped up by future historians. The enigmatic personality of Tipu can only be understood if we are ready to discuss him honestly. It must not be lost upon us that Tipu was a symbol of exemplary bravery and strove to bring together the Marathas and Nizam against the British, who were here not for trade alone but to expand their empire—a fact that Tipu alone among Indian kings understood. While we must admire Tipu for his dogged resistance to foreign rule, his belief that all inhabitants of this country had a common destiny and for elevating a state to the level of an empire, we must also accept that some of his imprudent policies played a part in depriving his beloved Mysore of her independence.

All the above objects belong to the Sarmaya collection
Nidhin George Olikara blogs extensively about Mysore under Tipu at Toshkhana.wordpress.com