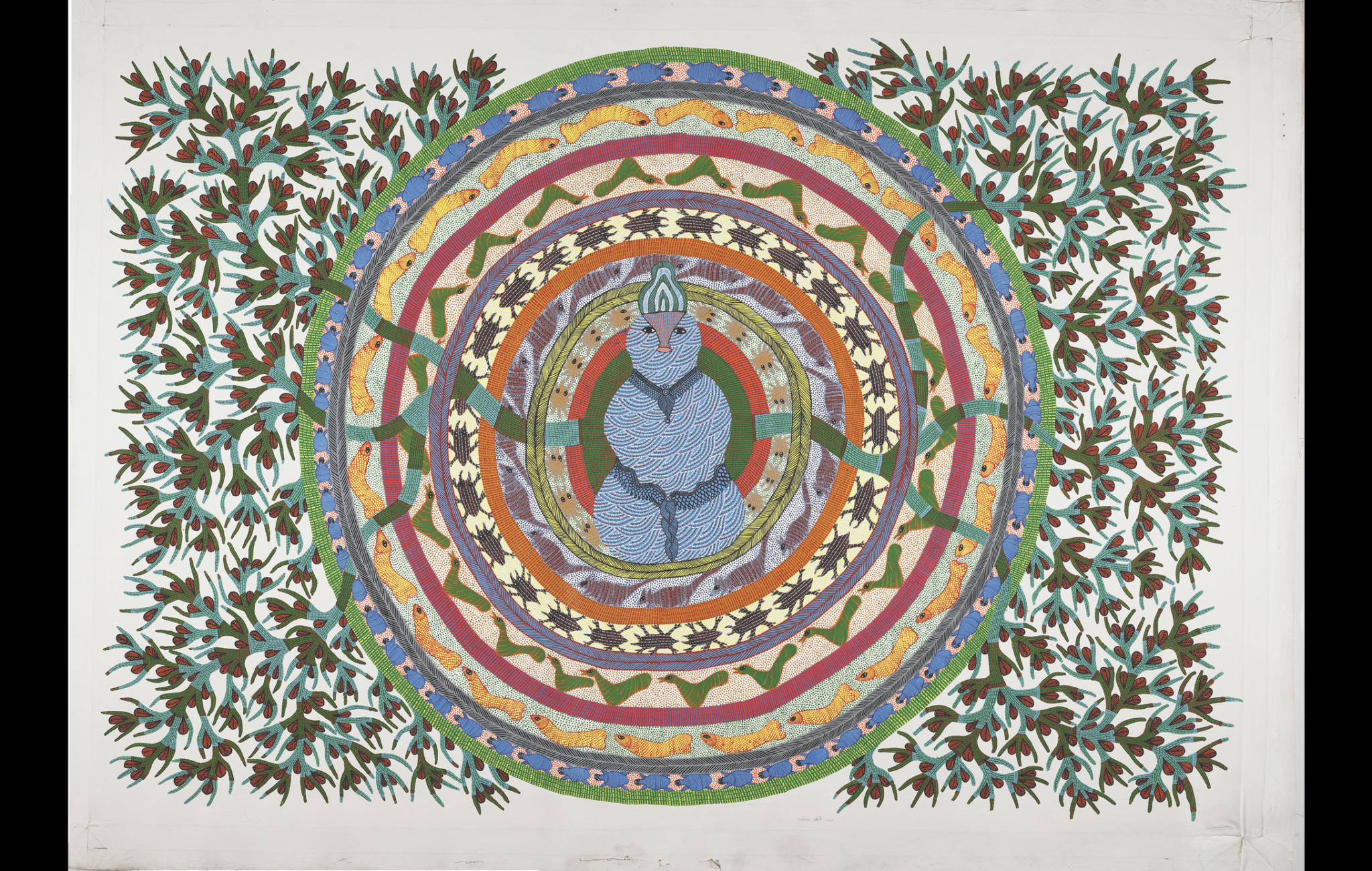 Gond is a celebrated, shared art tradition practised by the Gond-Pradhan community in India. It was first ‘discovered’ by Jagdish Swaminathan, searching for original artworks from Indian tribes in the 1970s. The search ended with him meeting the talented artist Jangarh Singh Shyam, considered the pioneer of Gond art. The themes revolve upon ritualistic idols and motifs and depictions of the natural world and its harmony and are painted in an elaborate pattern of lines and dots. This painting by artist Ram Singh Urveti is of the principal deity of the Gond-Pardhan community – Bada Dev. He is an all-knowing, omnipresent entity, creator of the universe.

As the origin story goes, Bada Dev was sitting on a lotus leaf when suddenly he had the vision to create the world. He rubbed his chest, and from its dirt, was birthed a crow. The crow was given the task of looking for clay, but all he saw was water. The crow met Kekda Mal, the crab, and the two dug up an earthworm together. They made the earthworm spew out his food, which was soil. Bada Dev advised Makda Dev (the spider king) to weave his web across the water. On this web, the soil was scattered, and land was created. The deity then released all living creatures on the land. This painting represents this tale in a static state. Here,  Bada dev is portrayed in the centre, coloured so that he appears to be the personification of flowing water.

The colourful roundels in this painting portray Bada Dev’s early creations, such as the crab, the earthworm, the spider, etc. Two projecting branches of the Saja tree are depicted emerging from his body. According to the Gond-Pardhans, Bada Dev resides in the Saja trees, which can be found in abundance in Madhya Pradesh.

Ram Singh Urveti (b. 1970) started his journey at the age of 22 when he moved to the capital city of Bhopal in Madhya Pradesh. He and his wife, Satrupa, transitioned from their rural life to learn the art of painting under her uncle, Jangargh Singh Shyam. His paintings celebrate the spirits of his tribe, with subjects that are worldly and otherworldly.