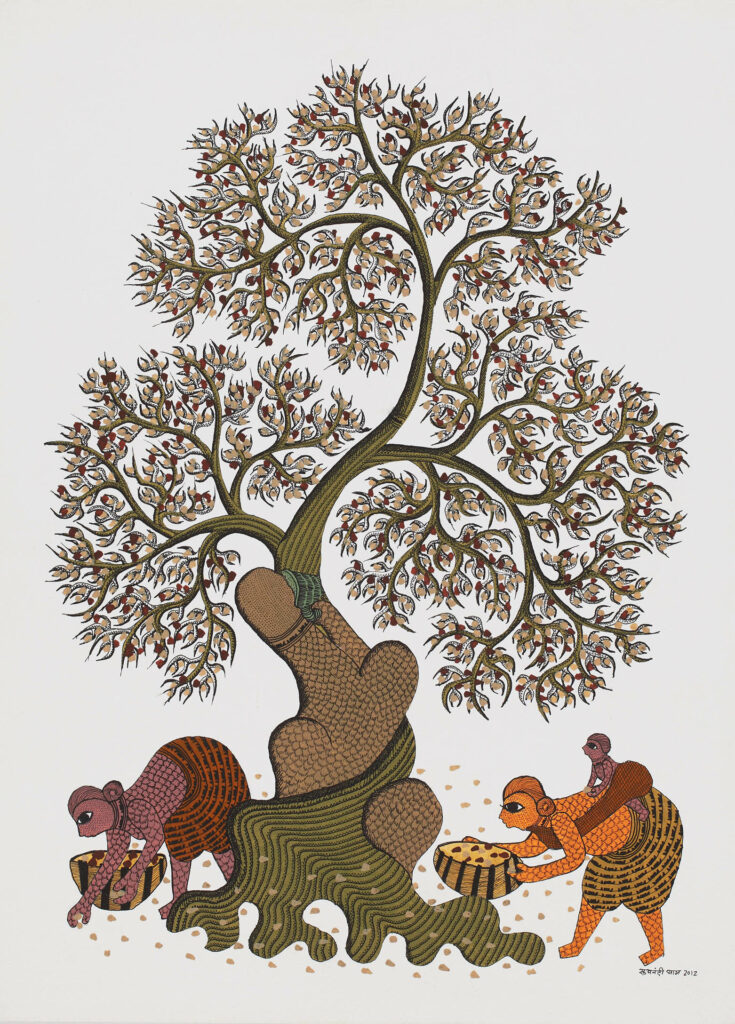 “I try to register the identity of what I represent in my art. If I’m drawing a tree, I make an attempt to show which tree it is, what its significance is to my culture, how it looks during a specific season and so on.  For instance, here with the Mahua tree. When the Mahua flowers are ready to bloom, the tree’s leaves will wither and fall.  I try to show details like these in my paintings.”

Sukhnandi Vyam’s journey with art began not with colours, but with soil. As a nine-year-old, he started sculpting the figures of gods, goddesses and folk dancers with the mud that his neighbours in the village of Sonpuri used to make kabelu or roof-tiles in summer. It wasn’t until years later, at the age of 17, that he started creating on canvas. Sukhnandi has since achieved acclaim for his Gond paintings and wooden sculptures, both within the state of Madhya Pradesh and across the country. As an artist from the Gond-Pardhan community, he considers his work to be an expression of the tribe’s shared identity. He said in a conversation with Sarmaya, “I try to portray what I learned of nature by listening to the stories told by our community’s ancestors.” Sukhnandi Vyam is one of the 20 artists whose work was showcased at our 2022 exhibition, Echoes of the Land – Art bears witness to a changing planet. 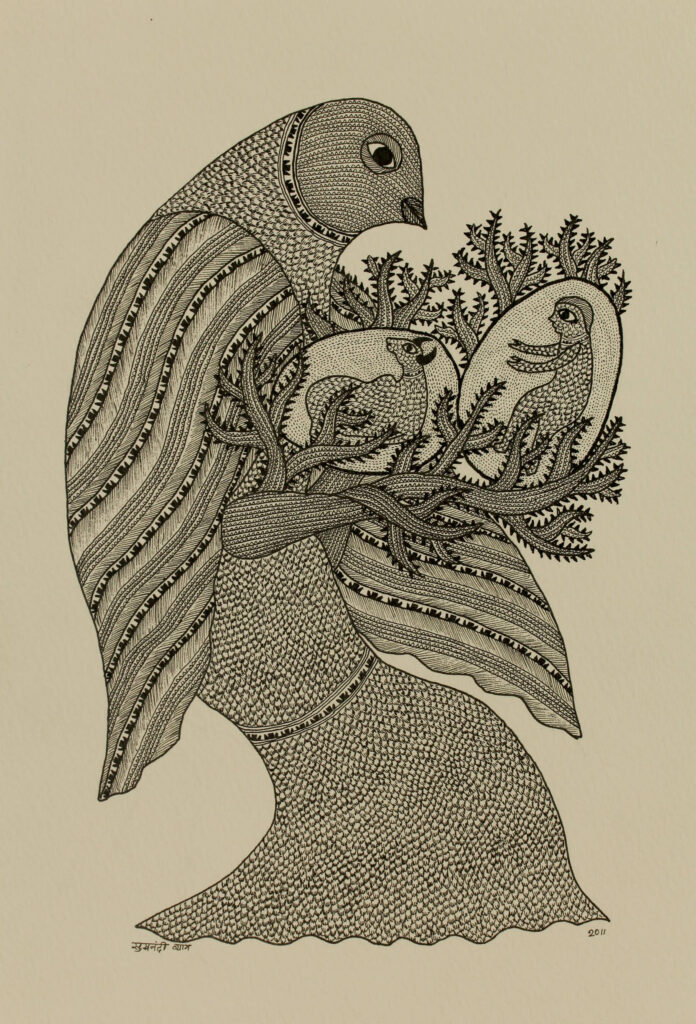 “I like making art around the stories of the Gond rajas, our rituals and culture, gods and goddesses, nature and jeev jantu (animals). Everybody can know and tell the story of humans but stories of animals are what I like. My artworks pertain to certain elements from folk or mythical stories. I take a small element from a big story and make art out of it.”

Like Gond art itself, Sukhnandi’s story too begins with Jangarh Singh Shyam. When news of this legendary talent from the village of Patangarh started to spread in the 1980s, art organisations began to arrive in the region. Sukhnandi remembers, “In 1991, people from Manav Sangrahalaya [Indira Gandhi Manav Sanghralaya aka National Museum of Humankind or Museum of Man, Bhopal] had set up a camp in Patangarh, where they found mamaji (Jangarh). They saw one of the sculptures I had made and called me to join their camp.” Later, he would move to Bhopal with his uncle and aunt, the artists Subhash and Durgabai Vyam. While assisting Durgabai, he’d encounter a new medium. “Until then, I had never used paint brushes or canvases—we didn’t get these back in our village.” 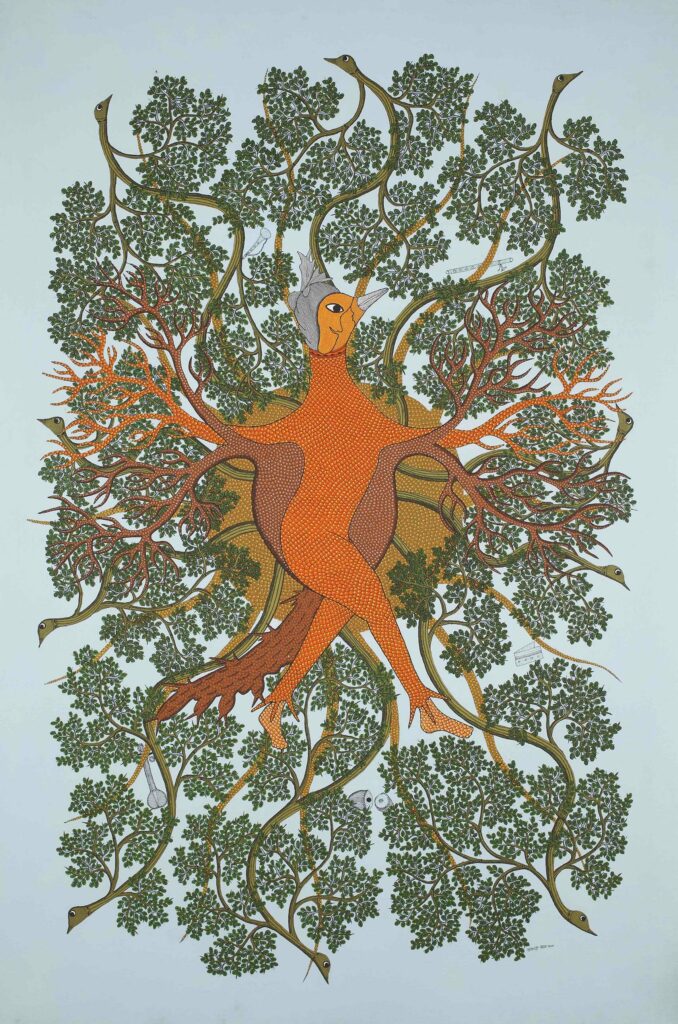 “The Bhari Pakshi is a creature from Gond mythology. It has the face of a bird and body of a human. We believe our Bada Dev takes the form of a type of cuckoo found commonly in our village, called Pardhan Pakshi. While flying, it chirps a lot, which sounds like music to me. This is why I have depicted instruments on the branches, to symbolically represent the sweet musical voice of the bird. I have shown different instruments like harmonium, flute, bana and others. I believe this bird is the inspiration for many Pardhan people who play the bana [a three-stringed fiddle].”

With support and guidance from Jangarh Singh Shyam, Sukhnandi Vyam began exploring the art of painting on canvas. He soon mastered acrylic colours, fabric colours and the Rotring pen, which he used to create striking monochromatic art. His natural talent and early guidance from the stalwarts of Gond art helped him cultivate a multi-disciplinary practice. “I have worked with mud, wood, canvas, even seed papers.” 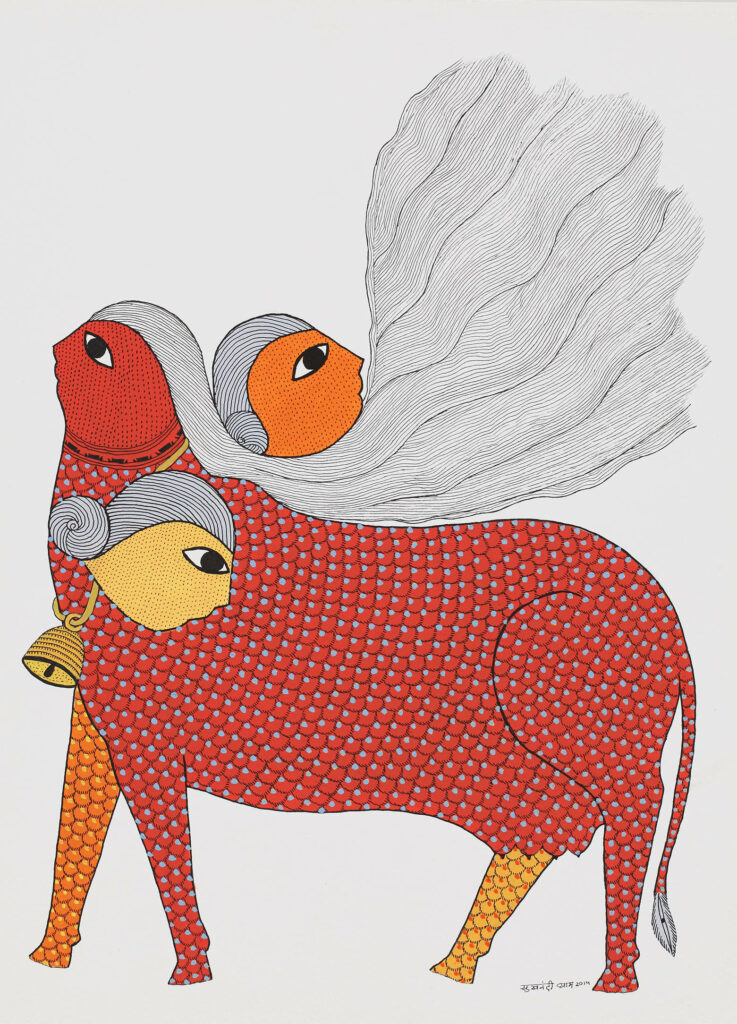 “Through my art, I try to portray the truth that God, nature and all living beings are connected to each other.”

Gond artists typically create a signature pattern or visual leitmotif that distinguishes their style and philosophy. For Sukhnandi, it’s the open human eye. “The eye is my signature, my identity, my imagination. To me, it represents light.” 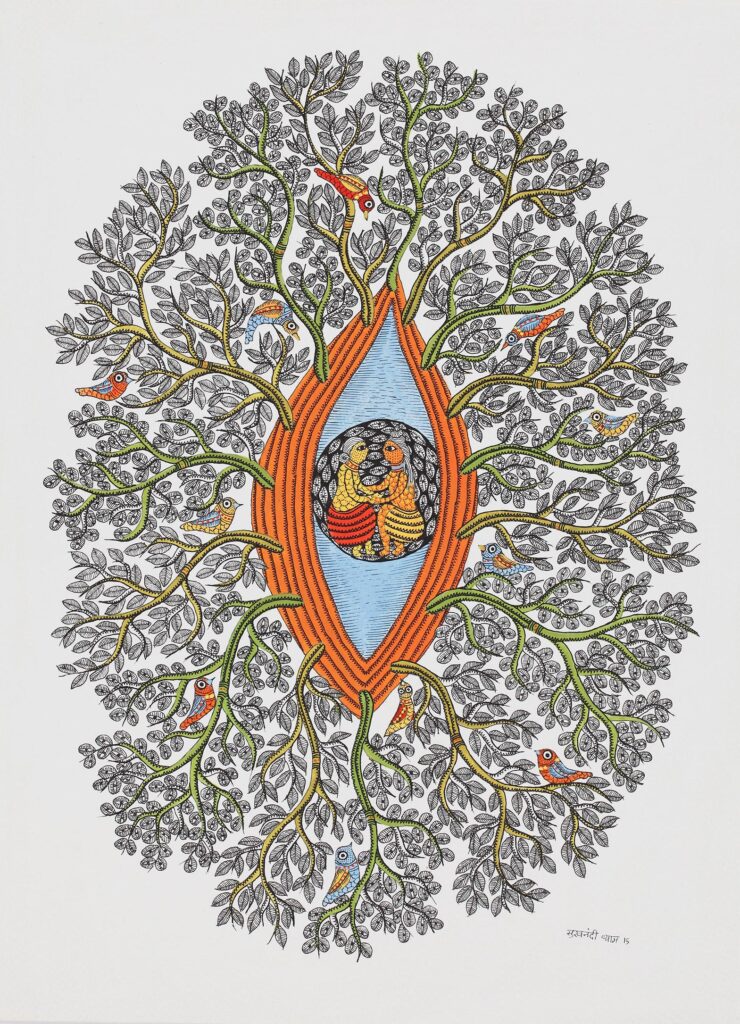 “This work is called Mahadev ka Netra, representing the third eye of Lord Shiva. In the centre, we see Mahadev and Parvati facing each other and surrounded by many eyes, which represent all living beings. I believe that the entire universe was created by Mahadev. Around him and his consort, I have shown their creation—the trees and the earth. The eyes depicted are open to symbolise the state being awakened. Humans can only see the world if their eyes and minds are open.”