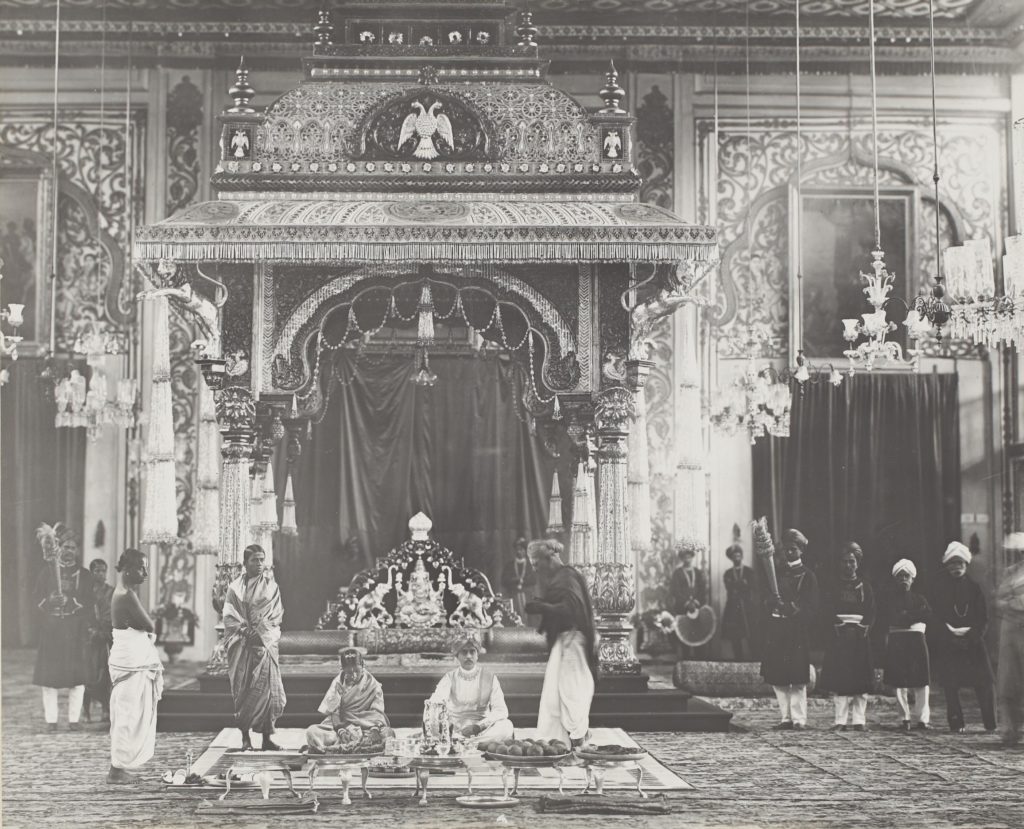 From the wedding album of His Highness Yuvaraja Kanteerava Narasimharaja Wadiyar and Her Highness Yuvarani Kempu Cheluvamma Niyavaru Urs, a silver gelatin print circa 1910, Mysore from Sarmaya’s collection of rare photographs

Taken on the second day, shows a further advance in the marriage ceremony. His Highness the Yuvaraja and his bride are seen seated before the “Agni Konda” or Sacred Fire, while the officiating High Priest recites selected texts from the Vedas.

This should give you an idea of how new photography was on the scene when this picture was taken—the groom’s older brother, the Maharaja of Mysore who got married about a decade earlier, had his wedding portrait painted by Raja Ravi Varma. It was de rigueur for royalty to have their portraits painted by the best artist in the land but things had started to change a bit by the time the young prince Kanteerava Narasimharaja Wadiyar got married in 1910. By this time, the kingdom his family had ruled for nearly five centuries had entered what many believe to be its golden period.

Maharaja Nalwadi Krishnaraja Wadiyar was one of the wealthiest men in the world with a personal fortune of $7 billion, by today’s standards. He was a forward-looking visionary under whose reign Mysore became the first Indian state to generate electricity—Bengaluru was the first city in Asia to have street lights! So obviously when his brother got married, it had to be done not only in style but also using the cutting-edge technology of the day. Enter the camera. 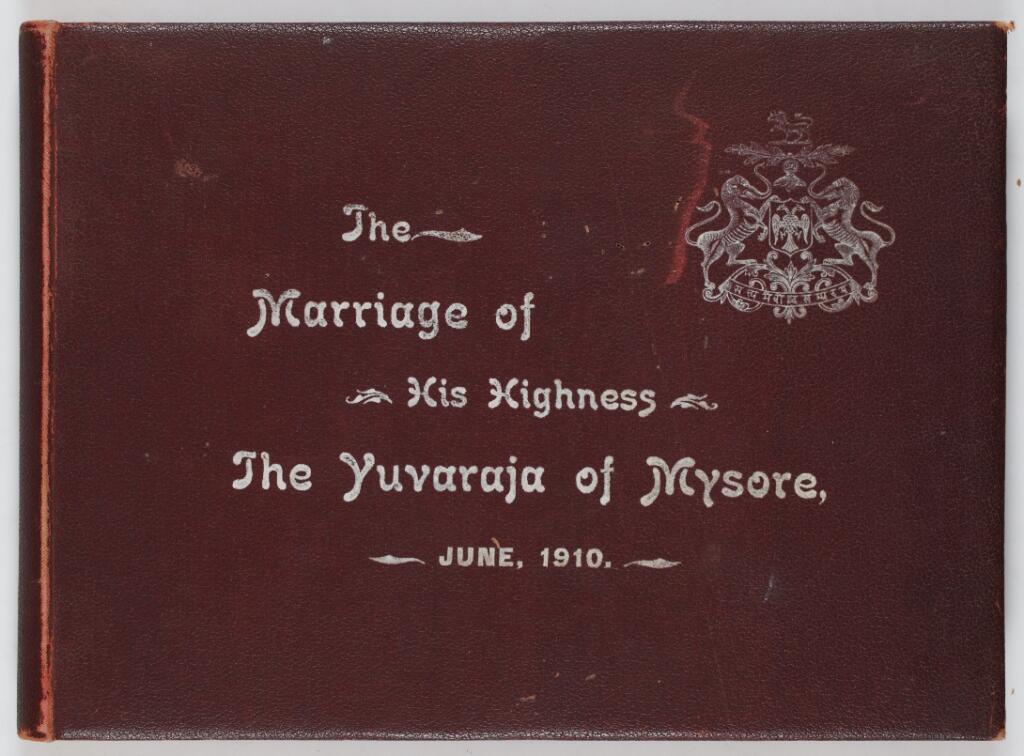 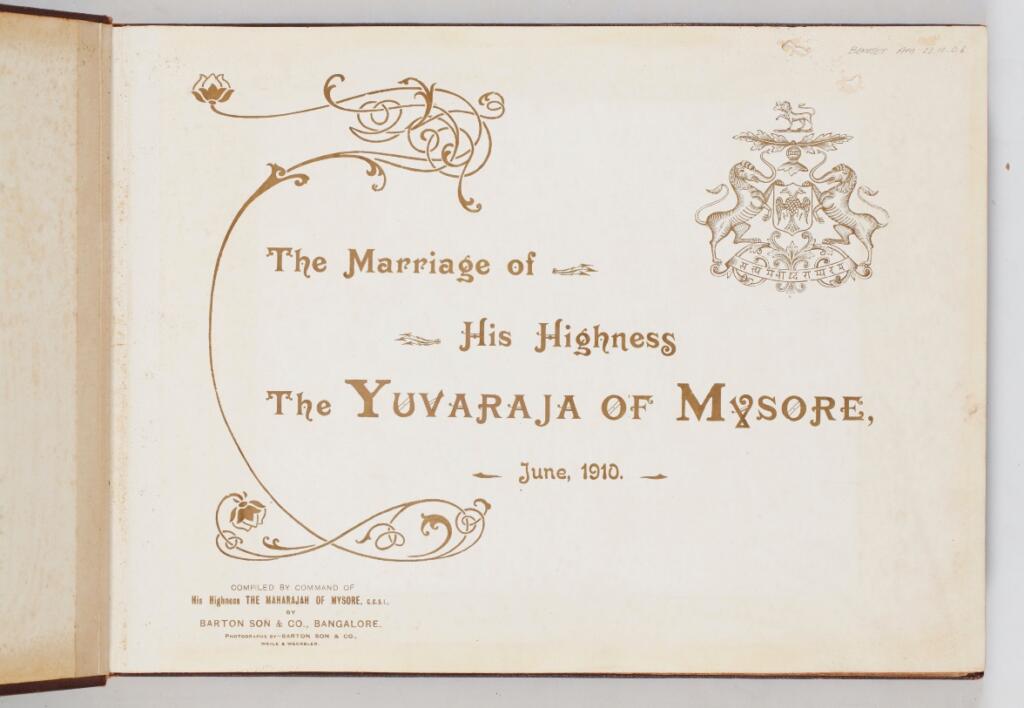 The photographs in this article are from an album in the Sarmaya archive of rare Indian photographs. These silver gelatin prints record the wedding ceremony of—and we quote—“HH Yuvaraja Sir Sri Kantirava Narasinharaja Wadiyar to HH Yuvrani Kempu Cheluvammanniyavaru Urs” in Mysore in 1910. It took place at a palace constructed especially for the occasion and at the Jaganmohan Palace. The celebrities of the day were all invited. While entry into the palace for the main ceremonies were by invite only, some 5,000 people gathered in the palace’s courtyard to witness the groom’s procession. This blog goes into some detail on the wedding ceremonies and matrimonial alliances of the Wadiyar dynasty.

The photography of this event was commissioned to Barton & Co, a studio in Bangalore, and the level of detail in these pictures is phenomenal, considering they’re over a 100 years old. Here are a few scenes from what was clearly the wedding of the year. Accompanying them are the captions, in italics, recorded in the original wedding album. 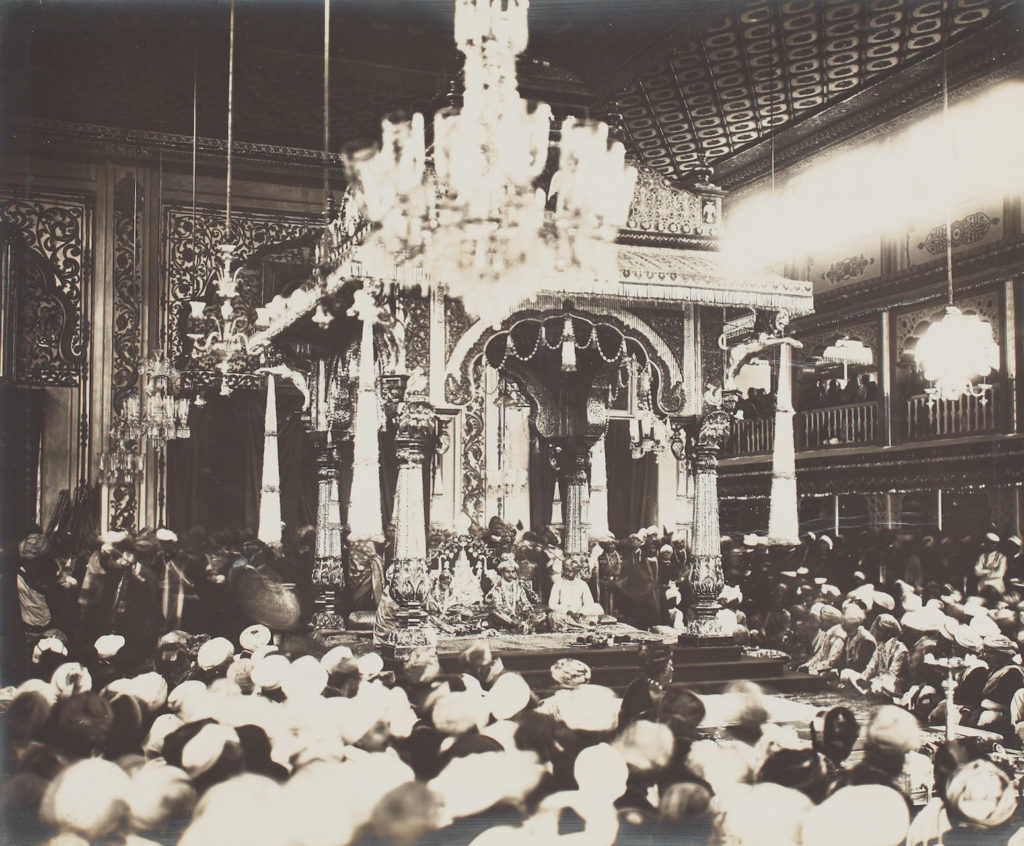 (A closer look below) 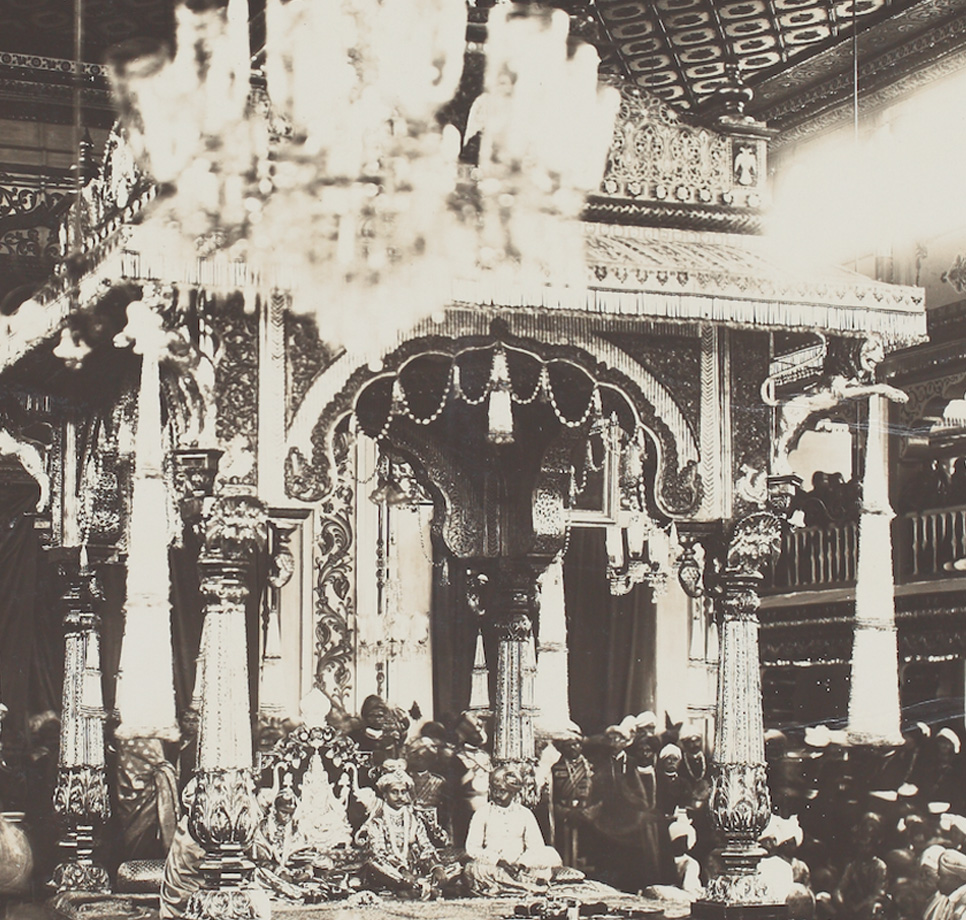 Scene in the Great Hall during the first day’s ceremony, showing His Highness the Yuvaraja and his bride within the marriage mantap with His Highness the Maharaja seated by them. The principal guests and the high officials of the State are given the place of honour on the immediate left of, and near to, the Mantap, while grouped around it are the palace dignitaries, gentlemen-in-waiting and maids of honour. 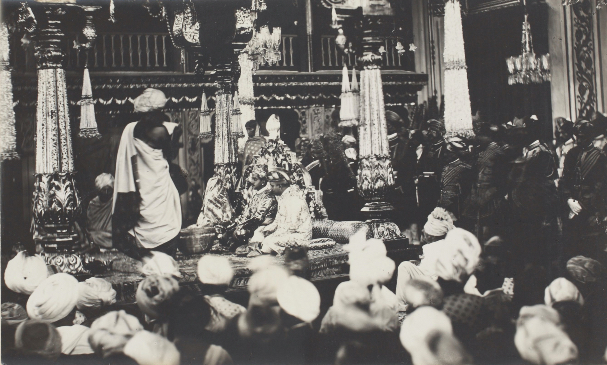 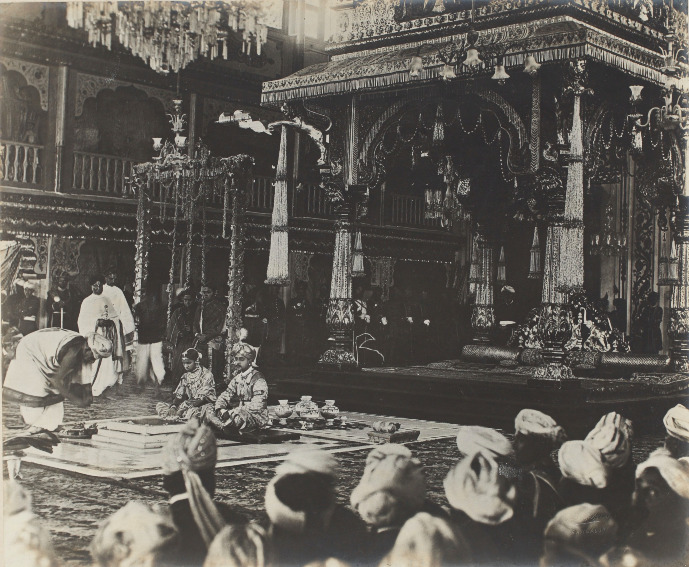 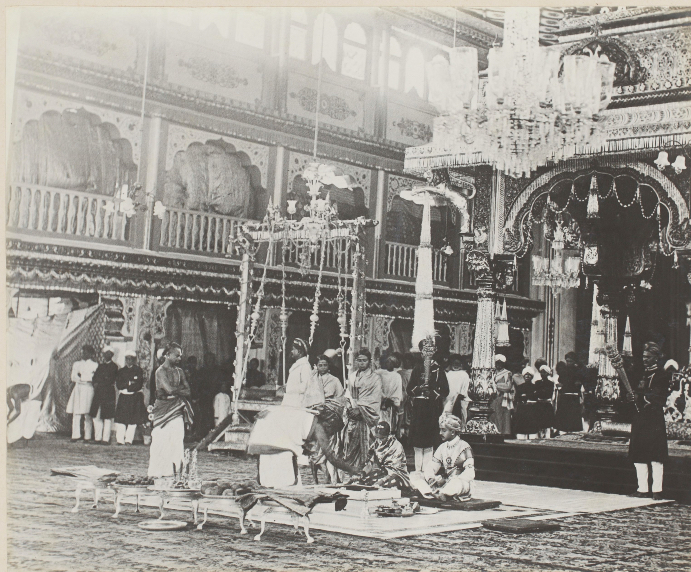 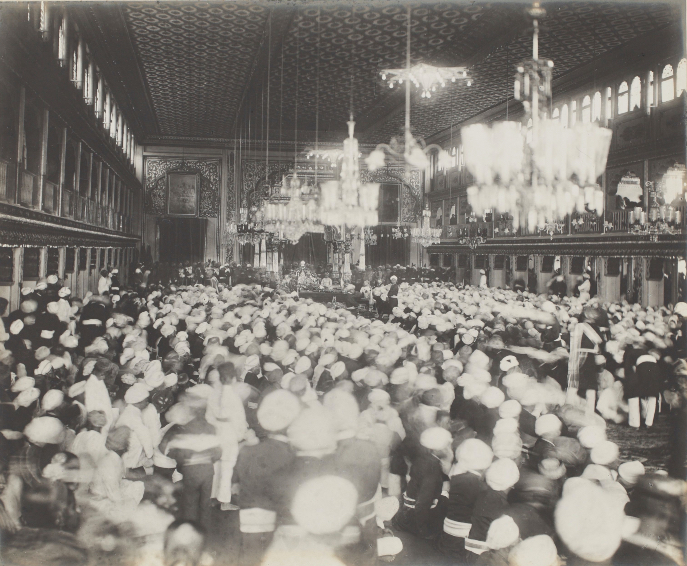 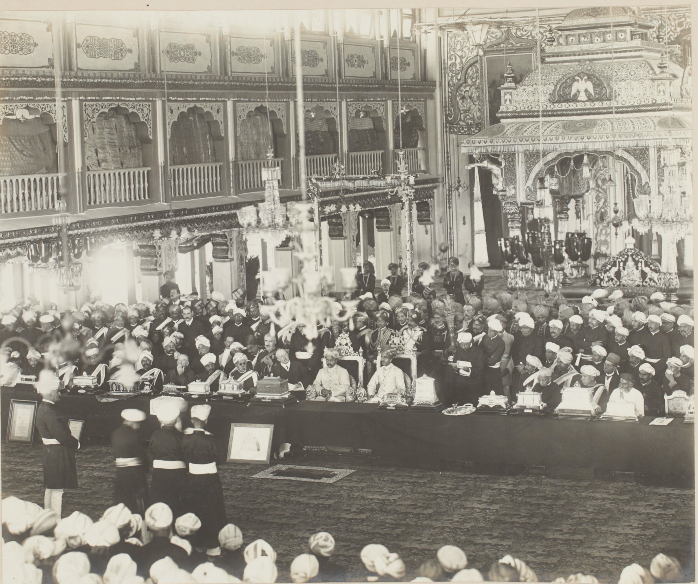 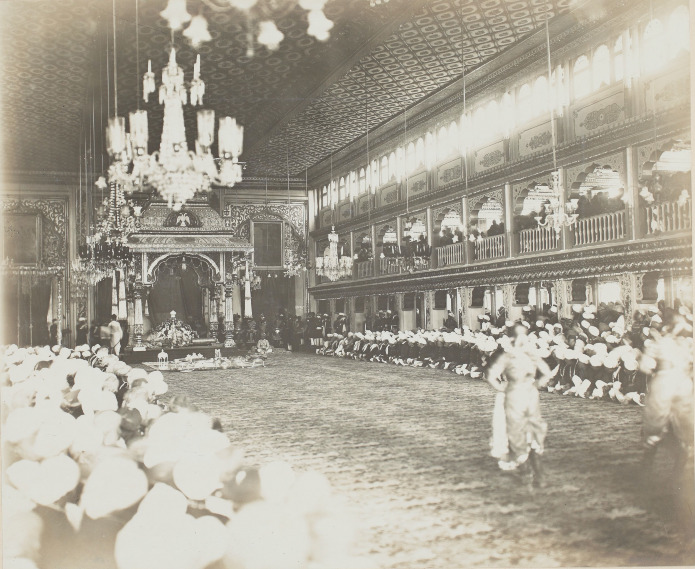 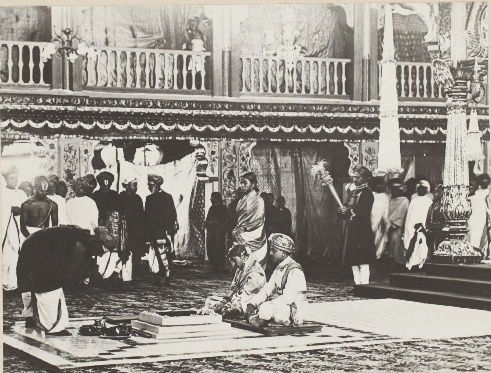 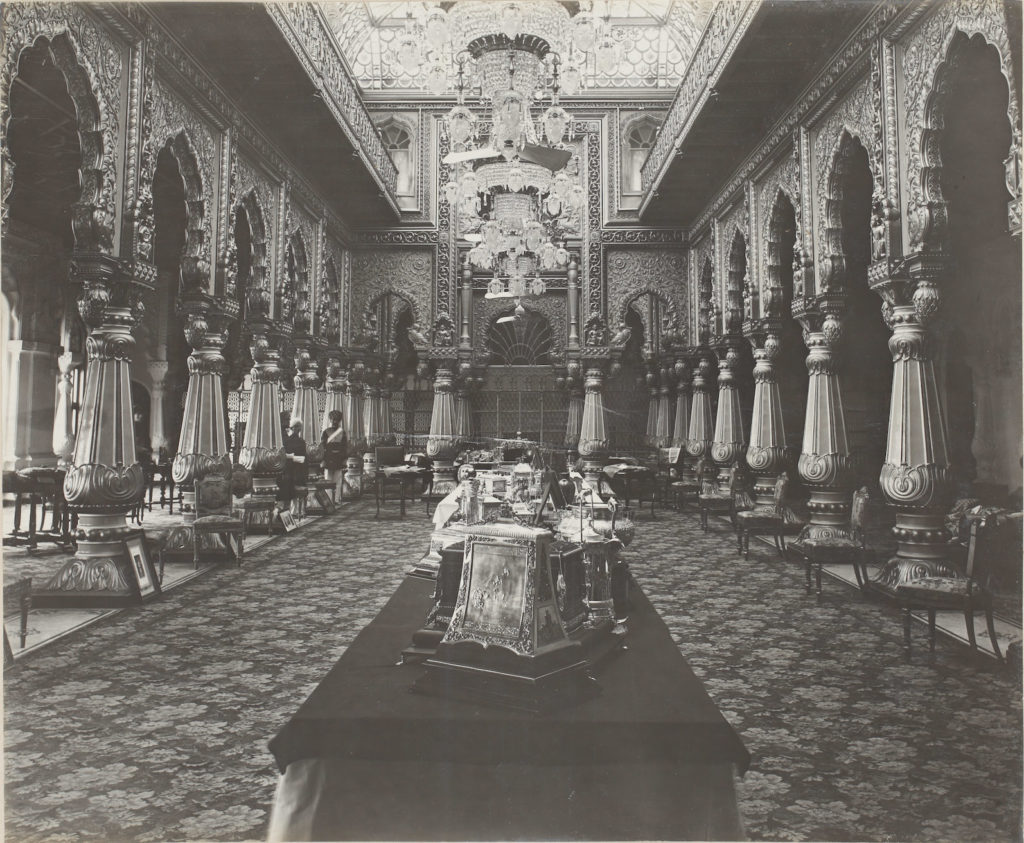 The Hall of the Amba Vilas in the new palace where the wedding presents were displayed. 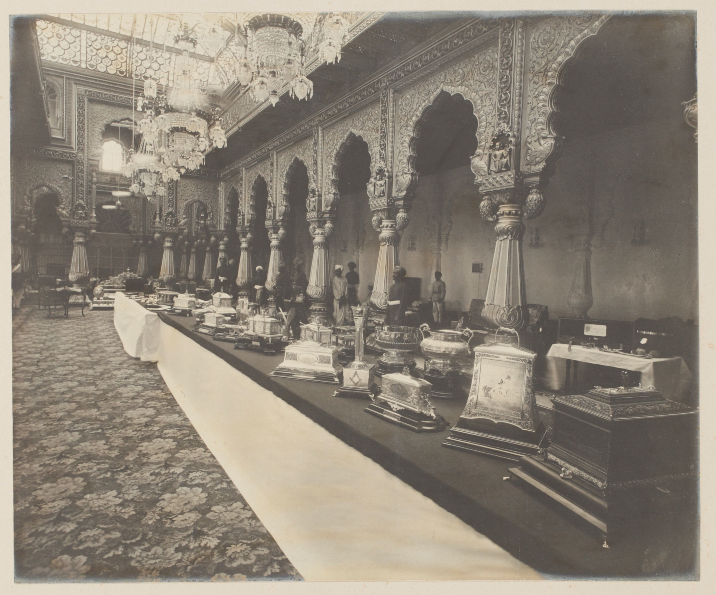 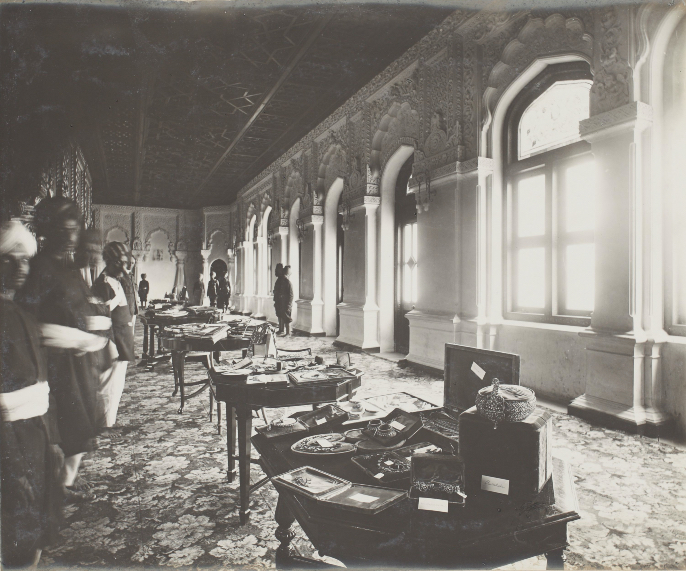 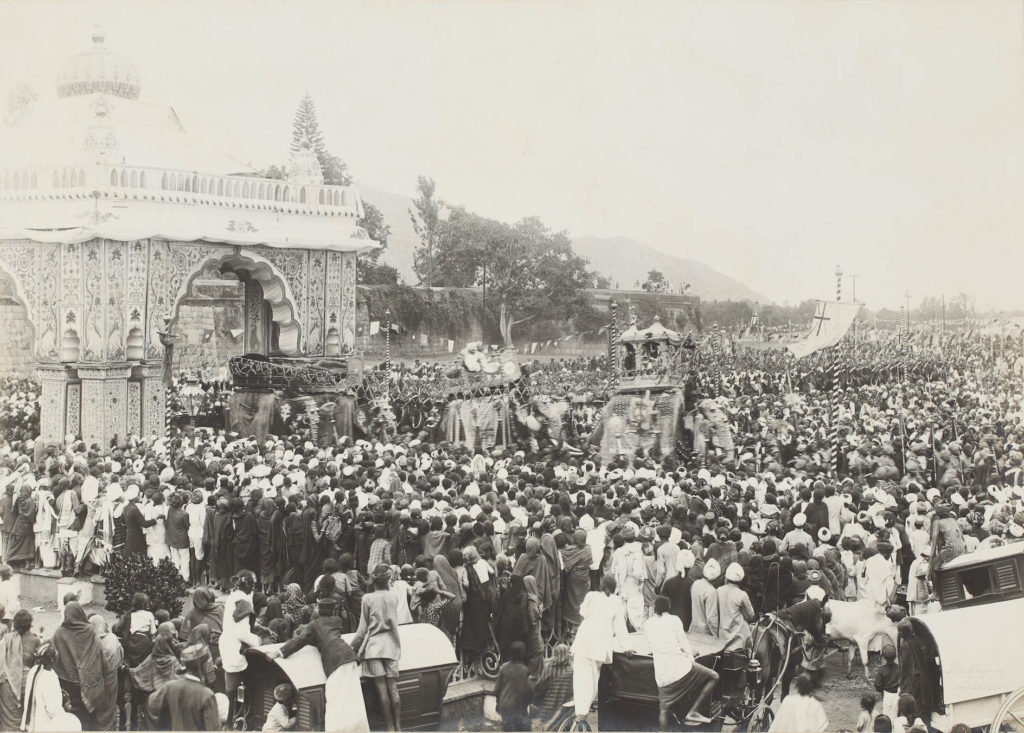 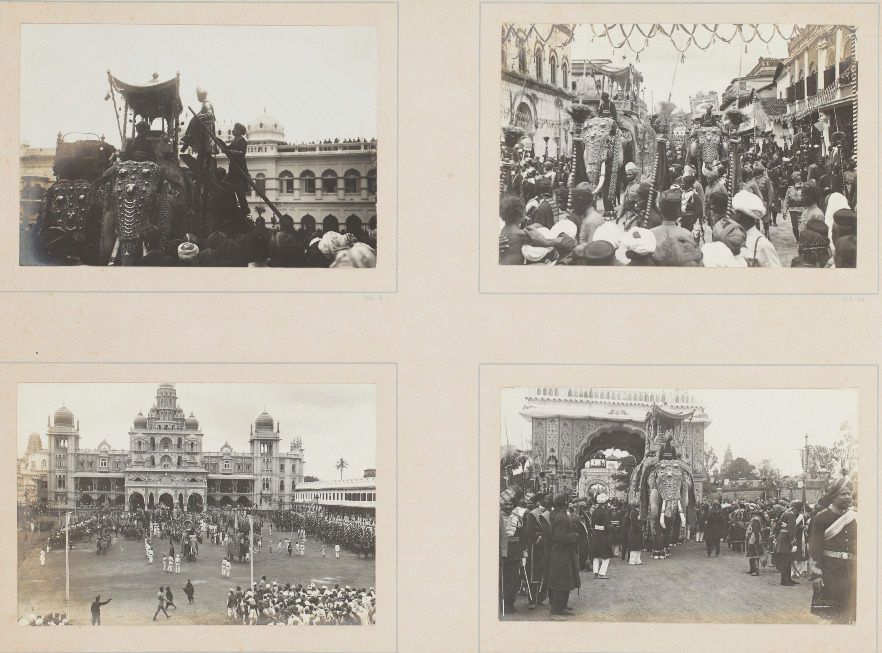 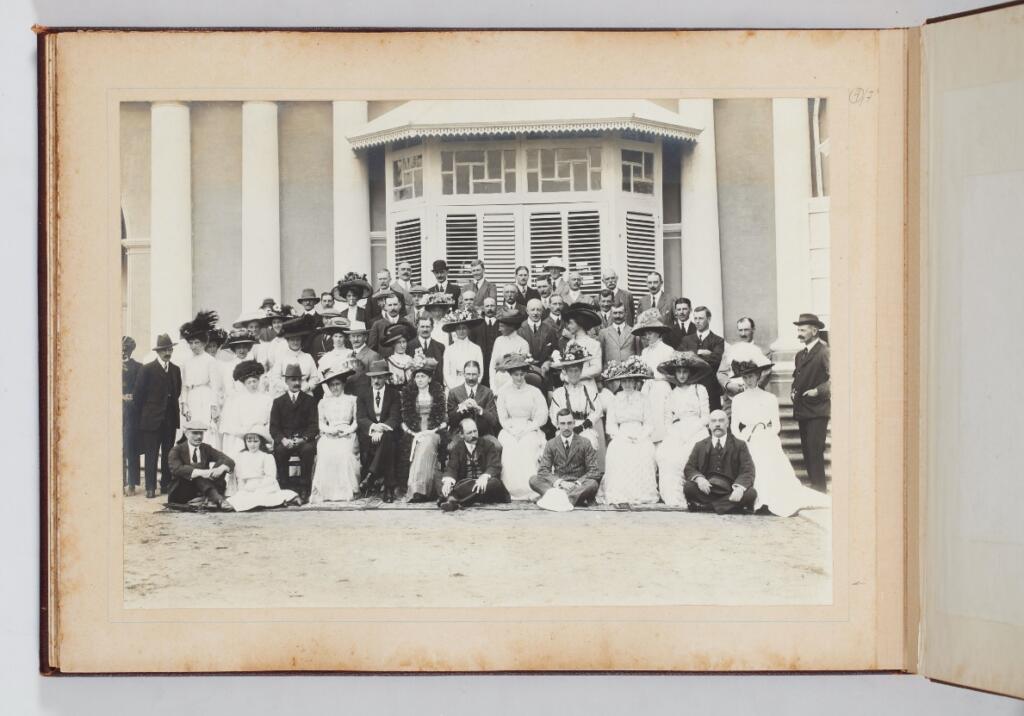 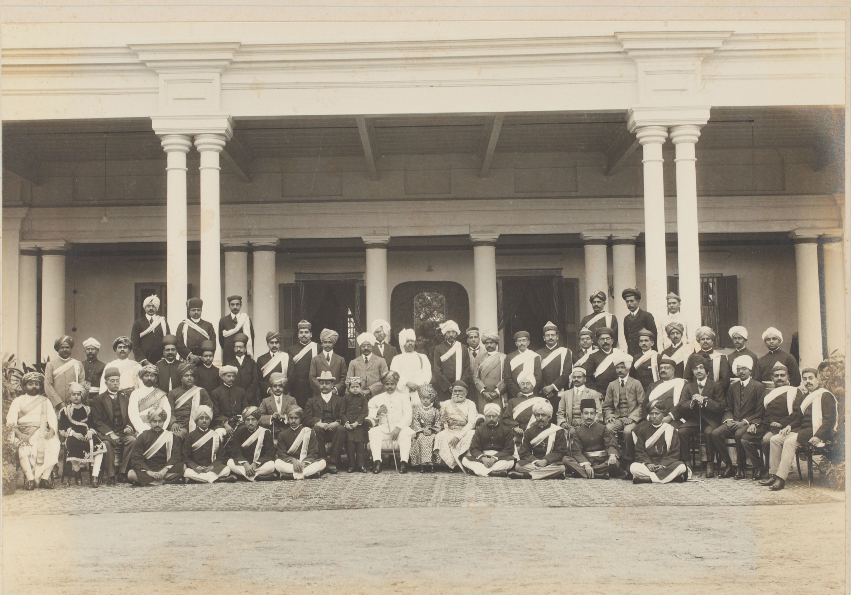