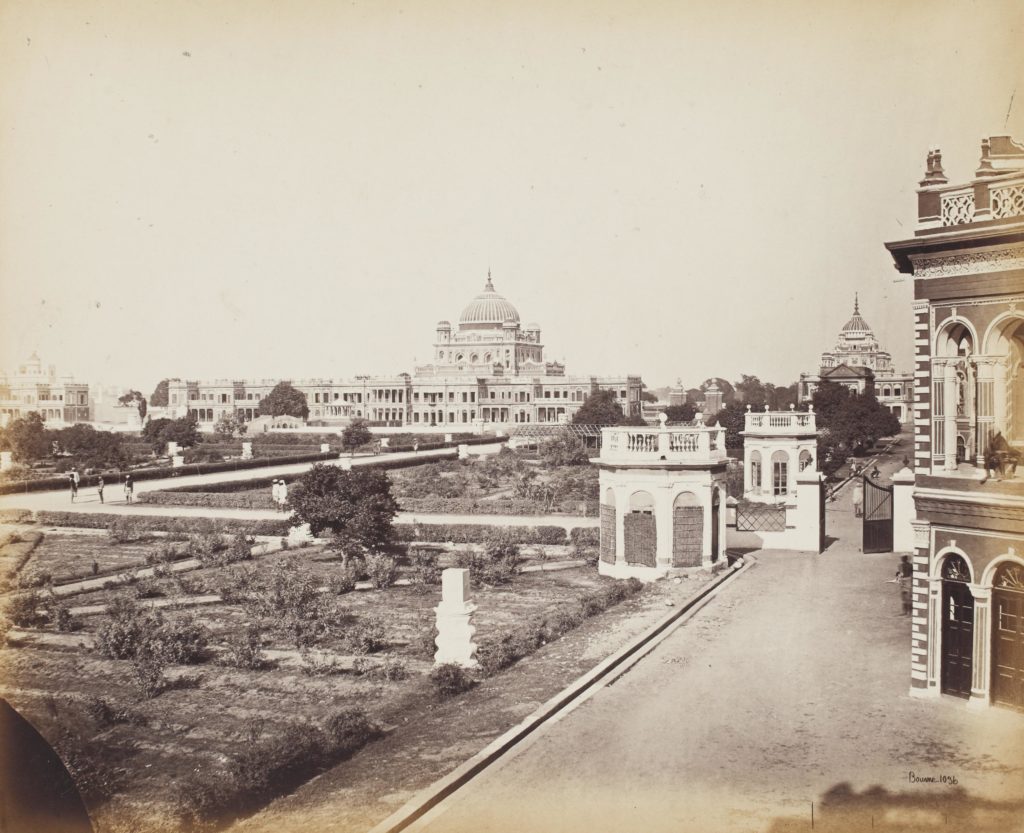 As grand and visually staggering as they are, palaces have as much personality, warmth and charm as the royals who once dreamed in them. They hold clues to the ambitions that animated an empire. Let’s travel via the Sarmaya archive to six such posh addresses once designed to be centre of the world and the seat of all earthly power. 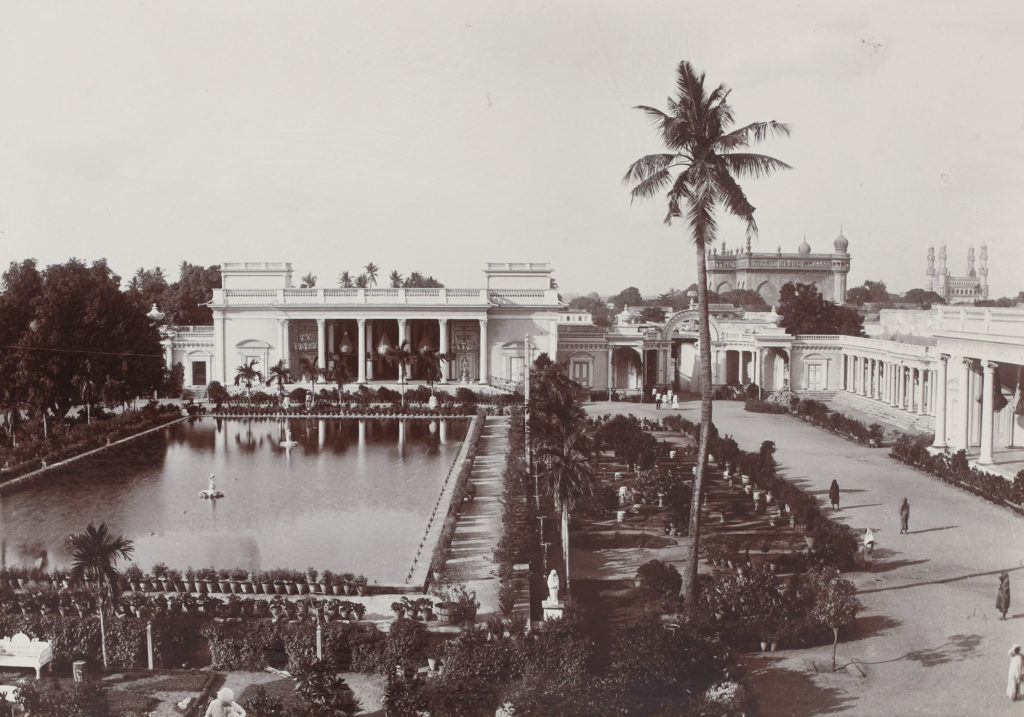 Chowmahalla Palace with Charminar and Mecca Masjid in the background

Unlike their contemporaries in far-flung Rajasthan, the Nizams of Hyderabad went wide, not high when planning their epic mansions. The Chowmahallah Palace is a great example. Originally spread over 45 acres and located close to the Charminar and Mecca Masjid in what was once the heart of the city, the Chowmahallah complex has two enormous courtyards built around water features—the first is ringed by four palaces (hence the name) and the second by rows of administrative quarters and guesthouses. In the 1750s, when the fourth Nizam of Hyderabad Salabat Jung started work on the palace, the trend of neoclassical architecture was sweeping through Europe—the Chowmahallah’s classical, almost austere lines betray their allegiance to this movement. After the departure of the Nizam’s family, the complex fell into ruin and shrank to less than a third of its size. It was restored to UNESCO award-winning perfection in the early Naughties and today houses the royal family’s collection of crystal chandeliers, vintage cars and weaponry. 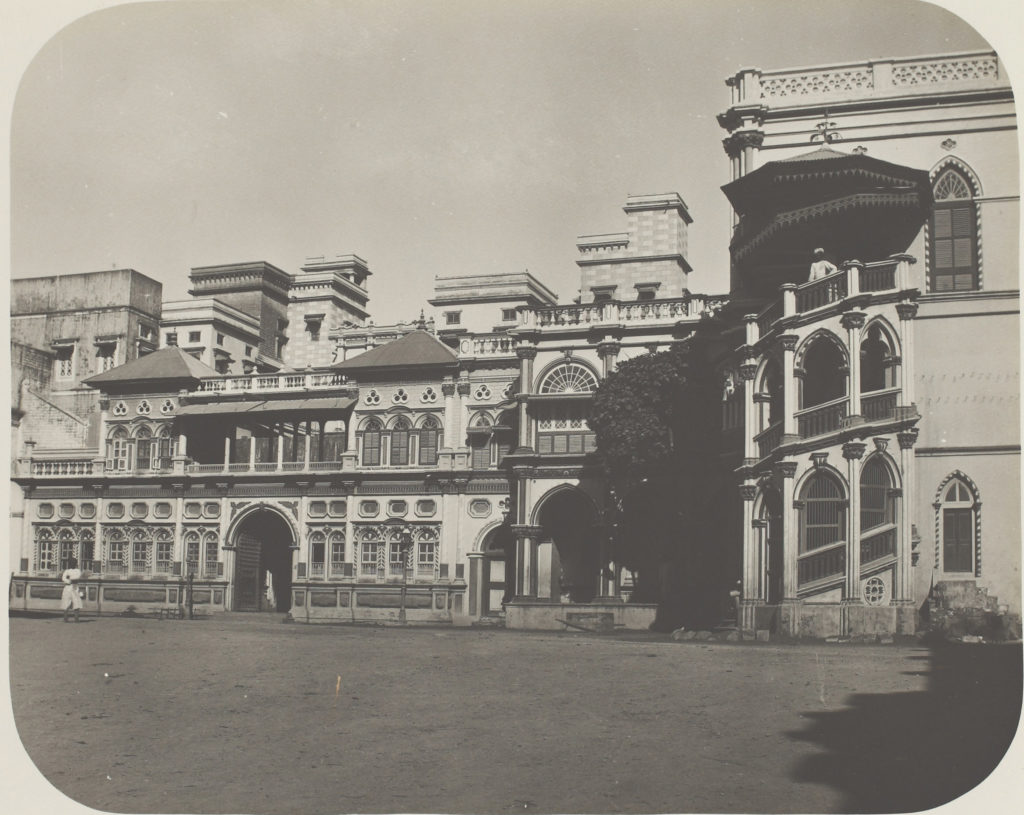 Junagadh was one of the few princely states to resist joining the Indian union after the British left in 1947. The Babi Nawabs who ruled the land pledged allegiance to Pakistan and fled there once a state-wide referendum made it clear that their subjects professed no such loyalties. During their reign, the Nawabs lived lavishly in palaces that boasted a profusion of architectural styles, from Gothic to Islamic to European. They were especially partial to cockscrew stairways and domes. Today, the palace houses a museum that displays the furniture, weapons and personal effects of the Babi Nawabs. The last Nawab, Muhammad Mahabat Khanji III, was a beloved eccentric who is best remembered for his love of dogs; he would perform elaborate wedding ceremonies for his prized pedigrees to which dignitaries from nearby kingdoms were invited. But he’s also the reason the Asiatic lion survived extinction. By preserving parts of the Gir forest as a sanctuary and forbidding the hunting of the big cat in his kingdom, this Muslim ruler became the savior of the animal that would later come to symbolise Gujarati asmita or pride. 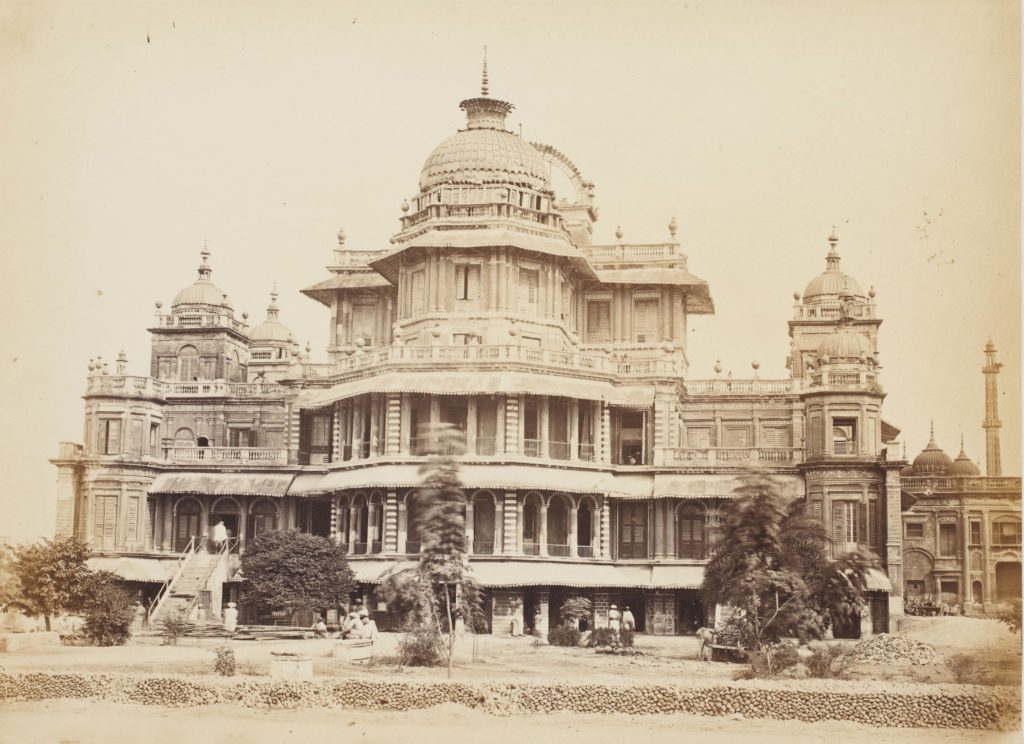 Wajid Ali Shah, the most colourful of Lucknow’s Nawabs, designed a whole neighbourhood around his palace that would house his harem and royal guests, not to mention all the pleasure gardens and sun-splashed pavilions his poetic soul desired. The Kaiser Bagh or Qaiserbagh complex was built in 1847 to be a sprawling town in itself, complete with bazaars, courts and mosques. But the ill-fated Nawab, whose reign overlapped with growing aggression from Britain’s imperial army, was not destined to live in this palace of his dreams for very long. In 1856, his kingdom was annexed by the East India Company and he was exiled to Kolkata. Upon his departure, his second wife, Begum Hazrat Mahal, took on the reins of the empire and held her own against the British army during the Uprising of 1857. It was in the Kaiser Bagh complex that the empress took shelter. Once her army of rebels was defeated, the imperial forces plundered and looted the palace complex, leaving behind a shell of what it once was. 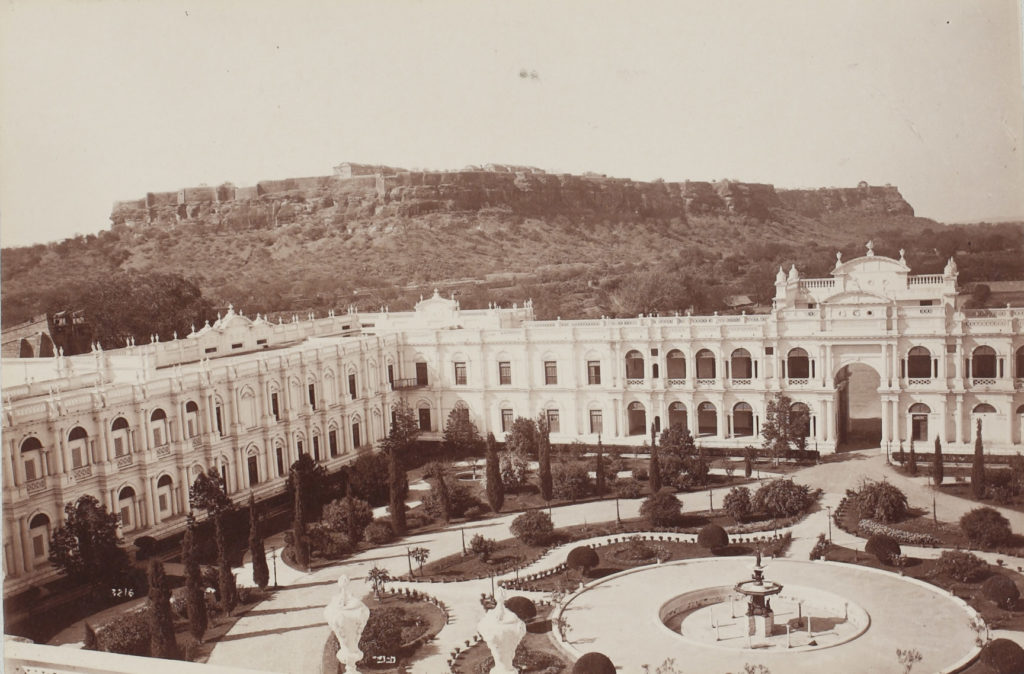 Perhaps the most ‘western’ of the palaces in our list, Jai Vilas was dreamed into being by a Maratha king who was much-decorated for his chivalry by the British empire. It is believed that Jayajirao Scindia built the palace in 1874 at the cost of Rs 1 crore to commemorate an upcoming visit by the Prince of Wales; his descendants still live in a part of this palace. There are some great stories told about the opulence of its interiors. The crystal chandeliers in the 100-foot-long Durbar Hall were so massive that elephants were suspended from the roof to see if it could take the weight. A tiny silver toy train zips around the dining table after a meal carrying brandy and cigars.  All these treasures are now part of the HH Maharaja Sir Jiwajirao Scindia Museum, which showcases miniature paintings, ancient sculptures, heritage chanderi textiles and ornate carriages collected by the royal family over the years. Of the 400 rooms in the palace, 35 have been turned over to this museum. 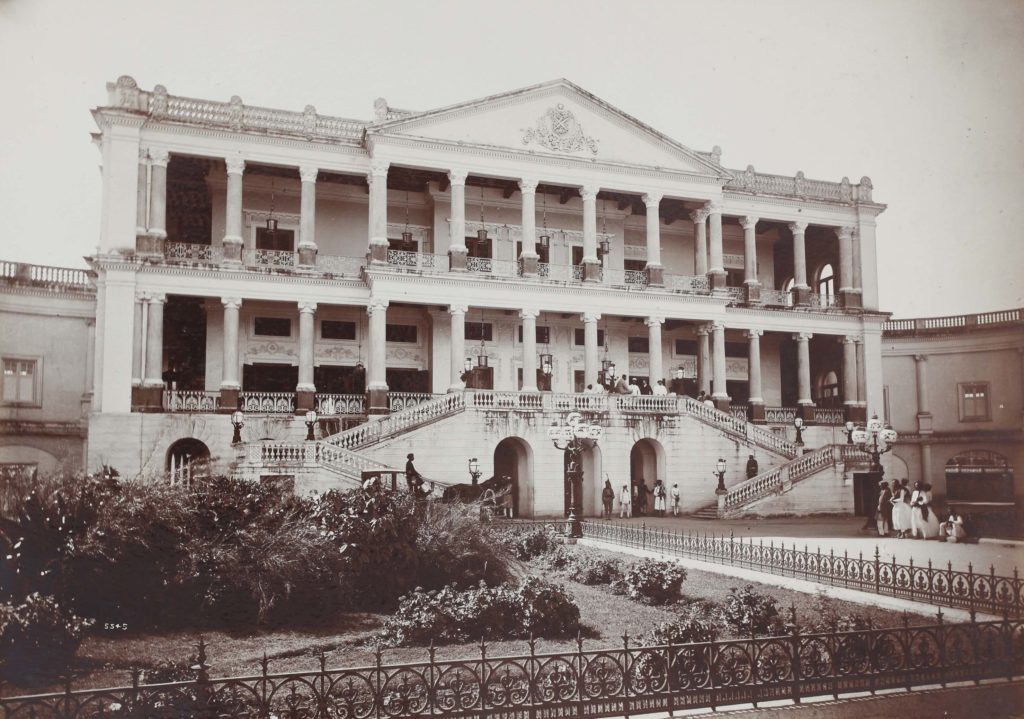 One of the youngest among the palaces on our list, the Falaknuma was built in 1894 not for a king but for his prime minister. However, the PM Sir Viqar ul-Umra did such a fantastic job of creating this lofty paradise floating above the city of Hyderabad—Falaknuma is Urdu for ‘mirror to the sky’—that his brother-in-law, the sixth Nizam expressed a desire to own it. And it was graciously handed over. With its heaving Belgian chandeliers, ornate marble fountains and sweeping balustrades, it’s not hard to see why the Falaknuma caught the fancy of the Nizam, Mir Mahboob Ali Khan, who was known for his extravagant personal style and decidedly European tastes in architecture and interiors. It was during his stay at the Falaknuma that he bought the famous 185-carat Jacob Diamond to use as a paperweight in his office. It’s a story you’ll hear in great detail during the grand tour of the property, which is now owned and run by the Taj Hotels group.

Darya Daulat Bagh in Srirangapatna is a gorgeous teakwood palace set amid manicured gardens. Once the seat of power in 18th-century Mysore, this prettily proportioned summer palace today houses the Tipu Sultan Museum. The structure was built in 1784, two years after Tipu succeeded his father Haider Ali as the ruler of the Kingdom of Mysore. It marries local Hindu and Islamic sensibilities in its form and décor. Every arch, pillar, jharoka and wall inside is covered in exquisite frescoes and paintings. Tipu would greet his subjects and give audiences from the grand balcony seen in the picture above. Read more about the Sultan of Swing here.