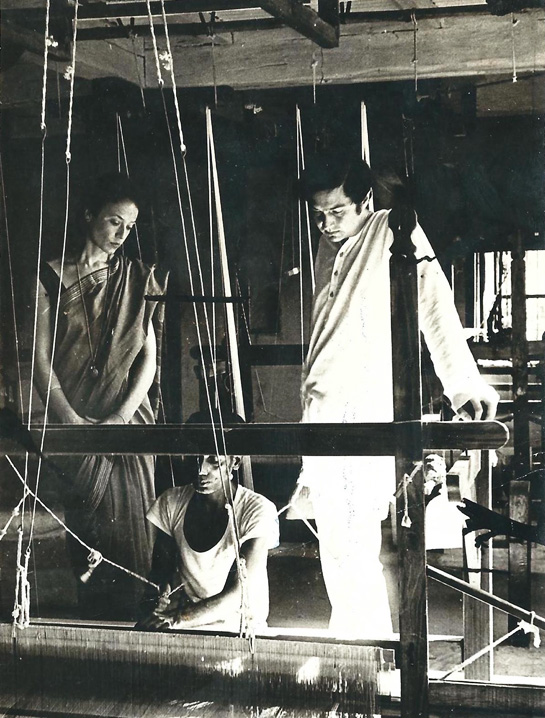 Royal patronage was the driving force behind much of the artistic practice in the Indian subcontinent between the 3rd century BC—marked by the establishment of the Mauryan empire—and the mid 19th century. Trendsetters and tastemakers of their time, these powerful aristocrats commissioned a variety of artists and craftspeople to help furnish their own private collections as well as create one-of-a-kind gifts that would vouch for the extraordinary taste and generosity of the giver. And to sustain this kind of artistic practice, it was common practice among the Mughals, Deccanis and even the Rajputs, to set up karkhanas or workshops within the palace walls. These karkhanas employed the most skilled hands and original minds of the region. Among the art and craft forms that flourished as a direct result of courtly patronage, these were among the 10 more prominent ones. 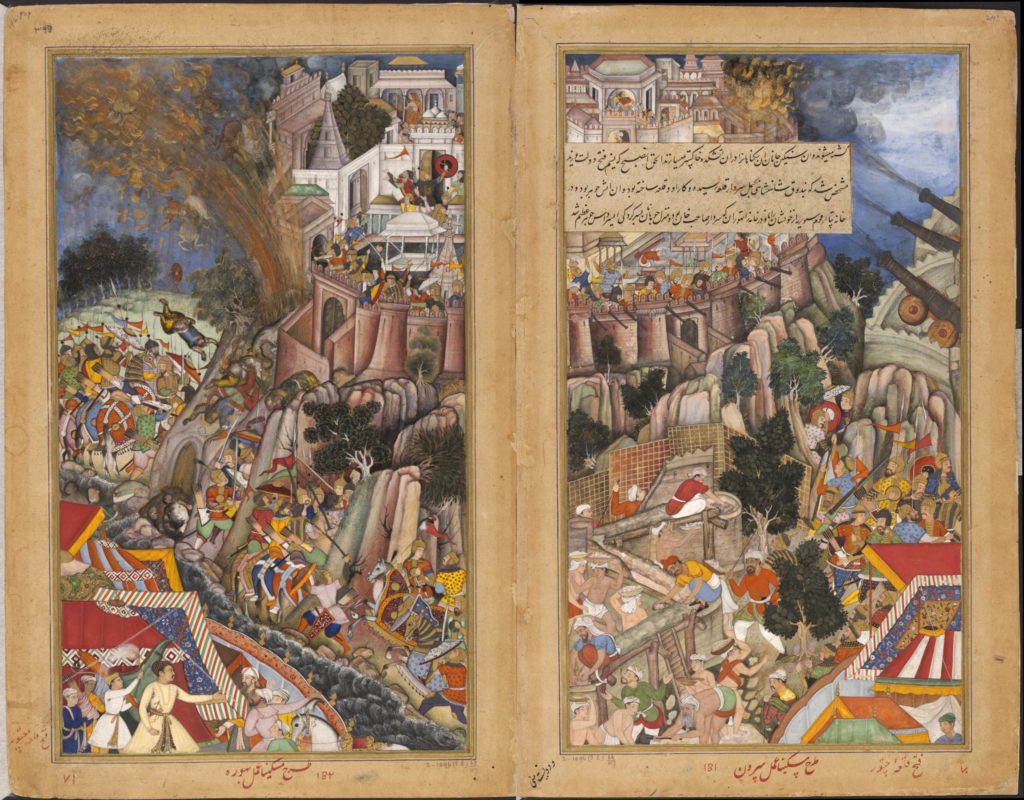 From the Akbarnama by Basawan, a legendary artist of the emperor’s court. Image © Victoria and Albert Museum, London

While miniature paintings have existed in various forms in India, it was not until the Mughals came into power in 1526 that the art form evolved into its sophisticated avatar that we’re familiar with today. When he reinstated the Delhi Sultanate in 1555, Humayun brought with him celebrated painters, Mir Sayyid Ali and Abd al-Samad, from the Persian court to help establish the Mughal school of art in India. The art form peaked during Humayun’s son Akbar’s reign from 1556 to 1570, and continued through those of Jahangir and Shah Jahan. The paintings were often dominated by royal figures rendered in a peculiar two-dimensional style. The canvases were rather small—some measuring only about a few square inches, but they crammed in an astonishing level of detail. 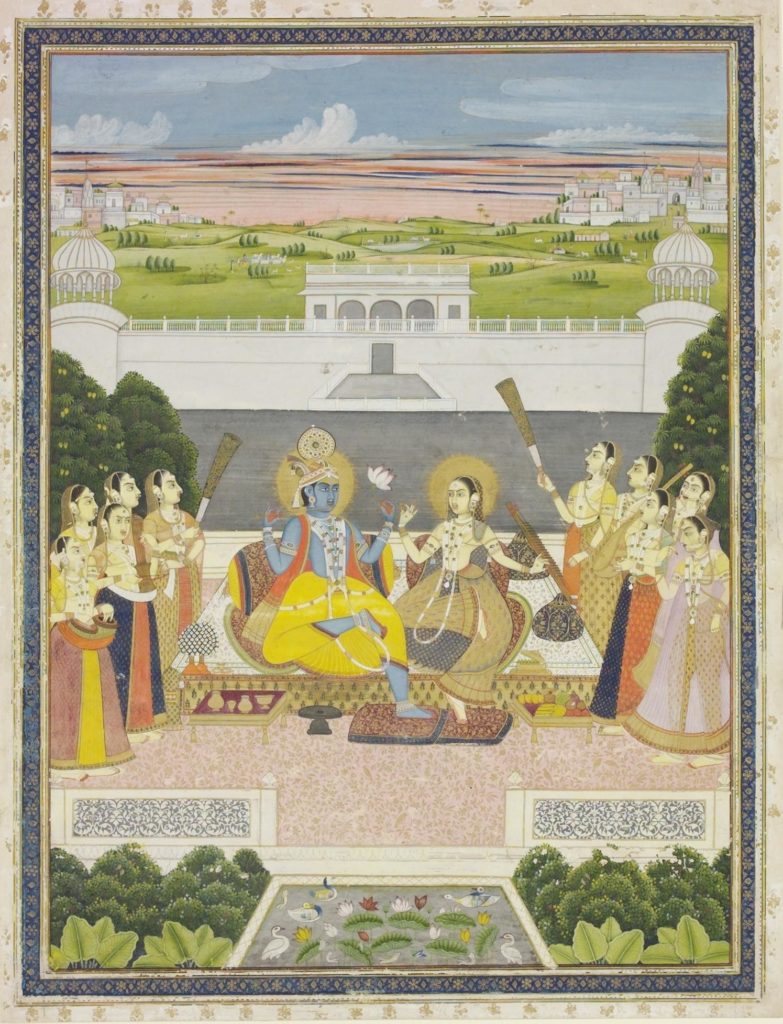 A painting of Radha and Krishna as Rajput royalty. Image © Victoria and Albert Museum, London

The Rajput school of painting was born in the late 16th and early 17th century in Rajasthan and was hugely influenced by Mughal miniatures. Aurangzeb’s reign between 1670 and 1707 saw a steady decline in Mughal art patronage and artists from the Mughal courts were forced to seek employment in the smaller Rajput kingdoms. The Rajput shaili, as it was colloquially known, evolved in a number of centers and of these Jaipur, Mewar, Marwar, Bikaner and Kishangargh being the most prominent. Rajput rulers favoured religious narratives and the paintings often illustrated scenes from the Ramayana and Mahabharata. The Kishangarh Radha-Krishna paintings are, perhaps, the most memorable pieces to emerge from this school. 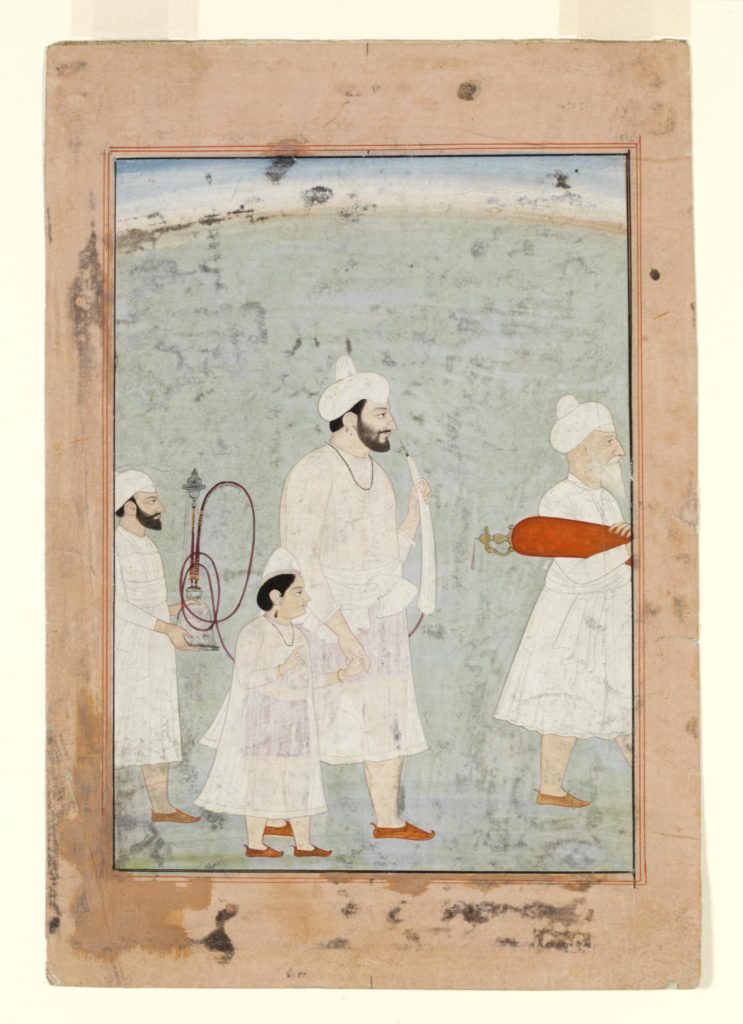 This miniature painting and book illustration style originated in the Himalayan foothills. Maharaja Sansar Chand, who ruled the princely state of Kangra, in present day Himachal Pradesh, was the most important patron of this art form, which evolved from the Mughal and Rajput schools in the mid-18th century. In addition to Kangra, the main centers of the Pahari school include, Guler, Basohli, Chamba, Nurpur and Bilaspur. Nature featured more prominently in Pahari paintings, which distinguished themselves from the other schools through a relatively muted colour palette, delicate lines and distinctive treatment of landscapes and perspectives. 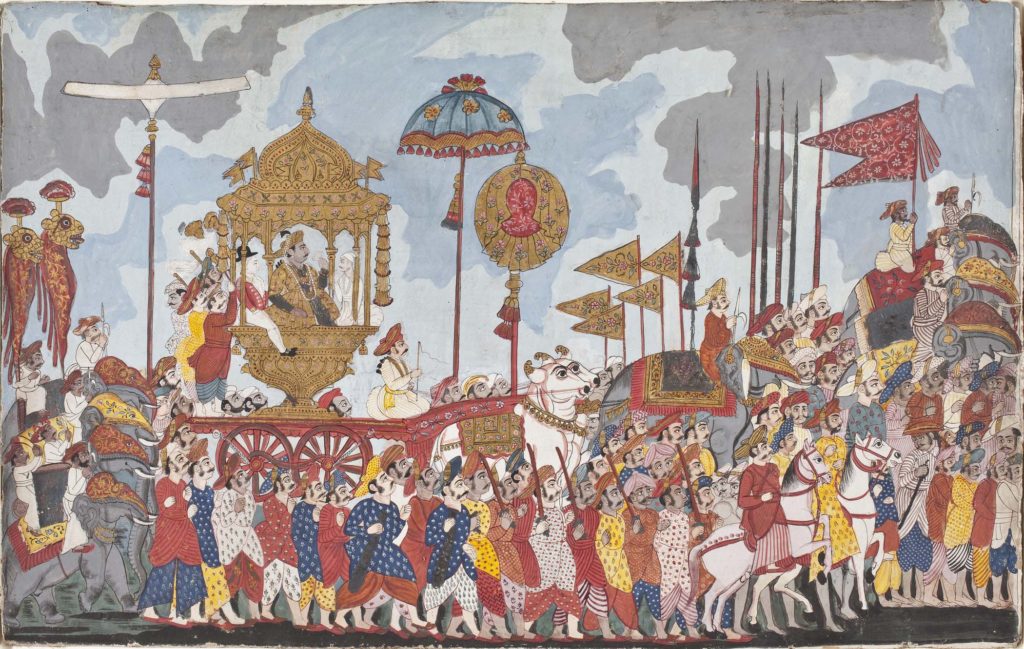 This classical style of painting originated in Tanjavur or Tanjore in the 17th century when the town in present-day Tamil Nadu was ruled by the Maratha Nayaks under the suzerainty of the powerful Vijayanagara Rayas. These paintings were often centered on prominent Hindu gods and goddesses and were decorated with rich gold leaf overlays and embellished with semi-precious stones, pearls and glass beads. The details and embellishments were often incorporated in relief, which lent the Tanjore paintings their characteristic three-dimensionality. 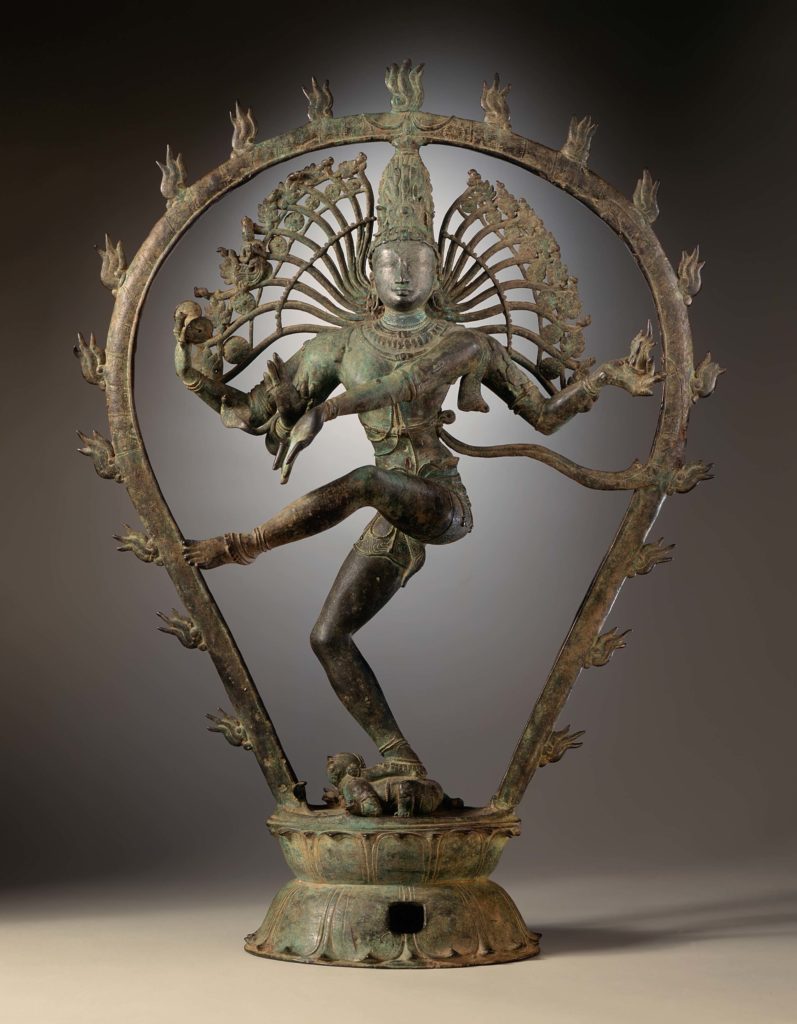 The origins of this art form can be traced back to 8th-century Kanchipuram under the reign of the Pallavas but it was under the mighty Chola kings of Tanjavur, particularly Rajajraja, that it reached unprecedented heights. These astoundingly beautiful bronzes, cast using the lost wax method, were primarily commissioned for temples. While the stone sculptures in the inner sanctum of the temples remained immovable or ‘achala’ deities were required for public ceremonies. To fulfill this need large bronze statues, measuring between two to five feet, were created to be carried outside the temple. During special occasions, these processional statues were robed, garlanded, adorned with precious jewellery, and shielded from the sun with parasols. 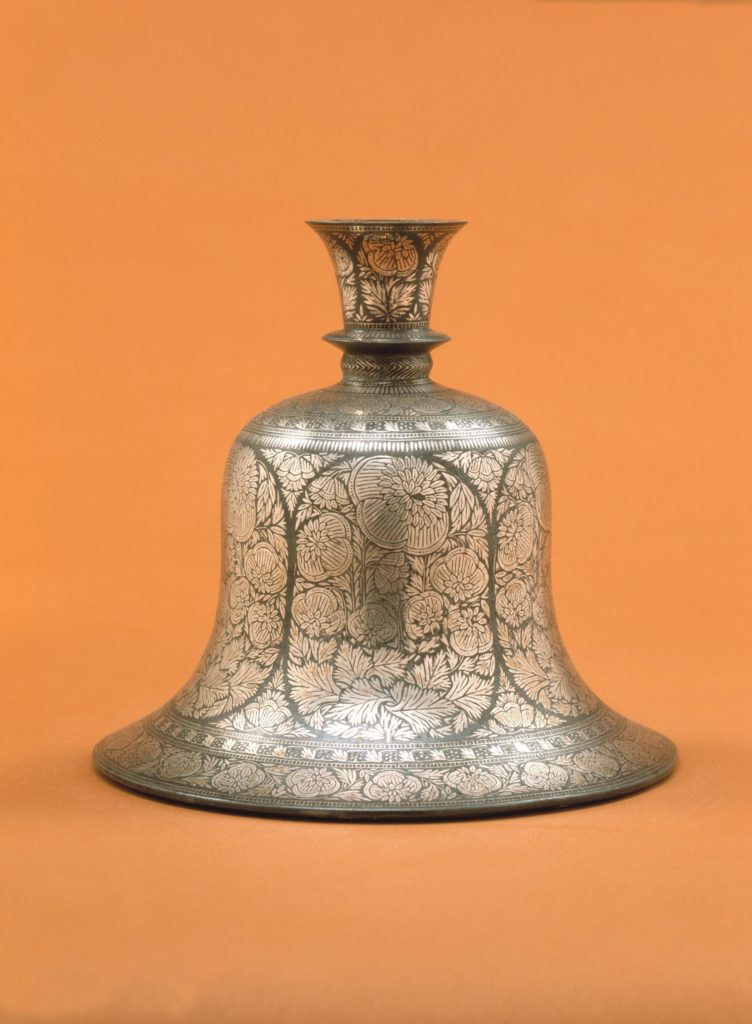 The base of a hookah with bidri work. Image © Victoria and Albert Museum, London

An amalgamation of Middle Eastern, European and Vedic influences, Bidri craft originated in the 15th century under the patronage of the Bahmani Sultan, Allaudin Behman Shah, in Bidar, Karnataka. The craft came into its own during the reign of the Badiri dynasty and travelled all over the subcontinent. Bidri involved inlaying the base metal of zinc mixed with copper, tin, and lead with intricate tendrils in silver or brass. The surface was then smeared with a sal ammoniac mud paste, which turned the base metal black and highlighted the shining inlaid metal. 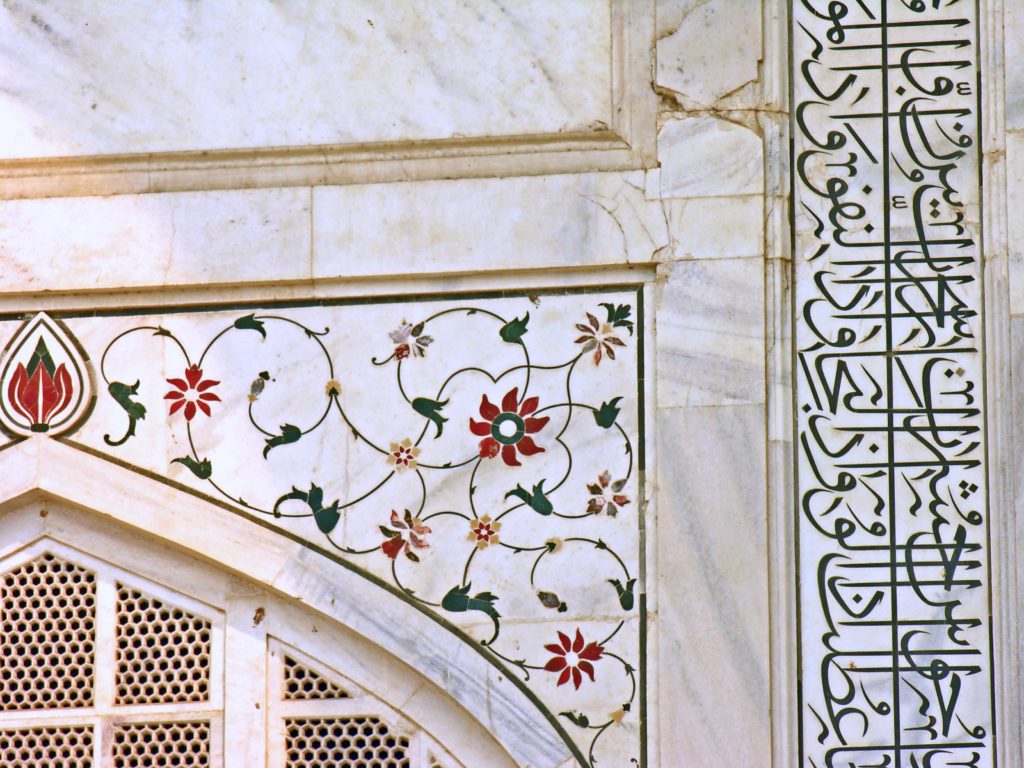 This art form evolved as an adaptation of pietra dura, the Italian stone inlay craft that originated during the Renaissance as an architectural decoration.  From the 17th century onwards, the pietra dura technique was applied on small objects, decorative panels, cabinets and tabletops and reached the Mughals in this form as gifts. Under their patronage, the art developed into its localised form, parchin kari. A manually operated emery wheel was used to shape precious and semi-precious stone slivers that were then inlaid in white marble to form calligraphic, floral and geometric designs. The artisanal community was tightly knit and the know-how was passed down through the generations. 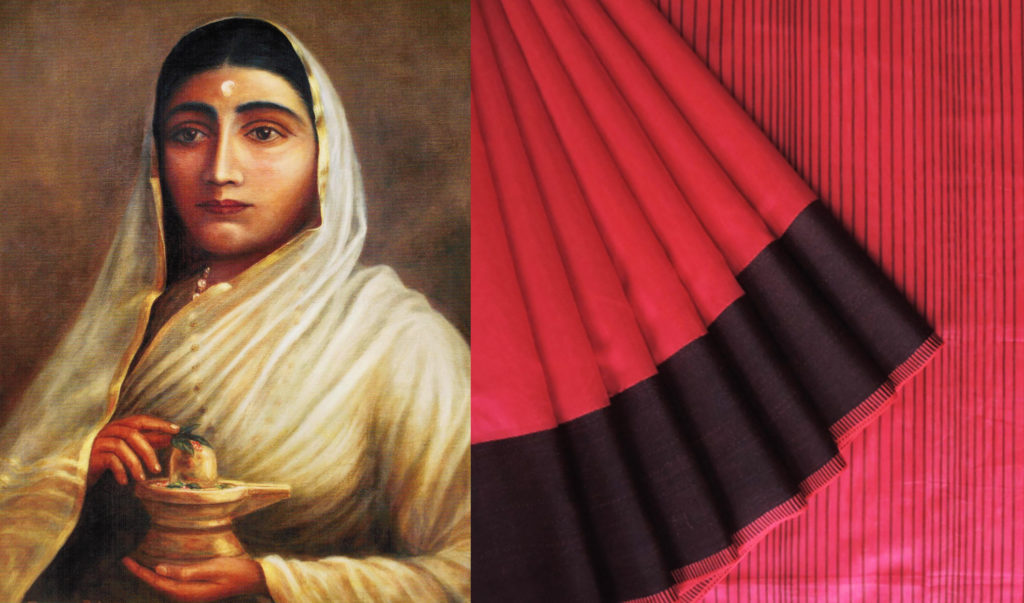 The ancient town of Maheshwar served not just as the capital of the Malwas during the Maratha Holkar reign but as a prime handloom hub in the 18th century. Legend has it that the enterprising queen Ahilya Bai Holkar employed weavers from neighbouring towns to design a special sari that could be presented to palace guests. The sari soon became popular within aristocratic circles and the trend trickled down to the masses. The original Maheshwari sari, woven in pure cotton, was nine yards long and had pallus at both ends so when one side of the sari frayed it could be reversed and worn some more. Following India’s independence from British rule, the Maheshwari industry saw a major decline and in 1979 the Holkars of the region set up the REHWA society and have been working to revive the textile since. WATCH: A Sarmaya Talk by Sally Holkar, who carries on the good work today 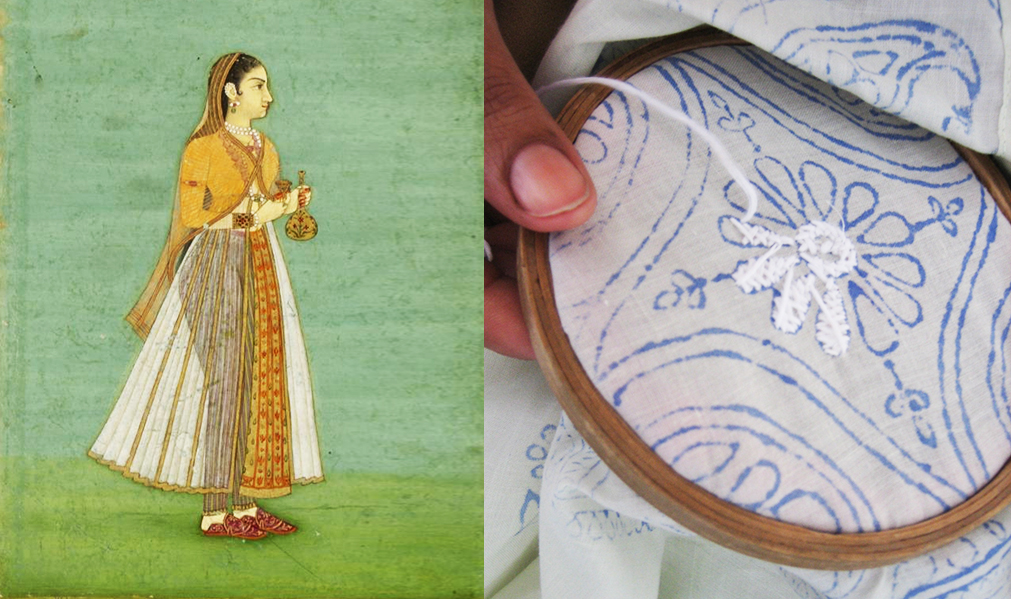 The delicate art of Chikankari embroidery is believed to have been introduced in India by the Mughal queen Nur Jahan. While the art flourished in the 17th and 18th centuries in the Awadh region under Mughal patronage, chikankari references have been found in texts from as early as the 3rd century BC with Greek explorer Megasthenes mentioning the use of floral muslins in the subcontinent. The needlecraft borrows from Turkish embroidery techniques and traditionally involves the application of white thread on sheer white muslin. Pattern blocks were used to transfer design motifs onto the base fabric. The karigar then applied the embroidery stitches and the finished piece was carefully washed to erase the transferred print. 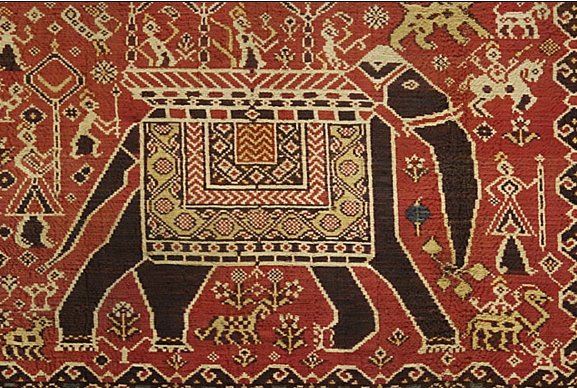 The craft of Patola weaving is said to have flourished under the patronage of the Solanki Rajputs. Determined to have an uninterrupted supply of the textile at hand King Kumarpala of the Chalukya/ Solanki dynasty brought 700 Patola craftsmen and their families from Maharashtra and Karnataka to Patan in Gujarat. He then orchestrated the production cycle such that he could debut a new Patola garment every day. Known as the textile of the kings, the Patola was woven so flawlessly that the front and back were indistinguishable from each other. The mesmerising craft combines mathematical precision and creativity in equal parts.