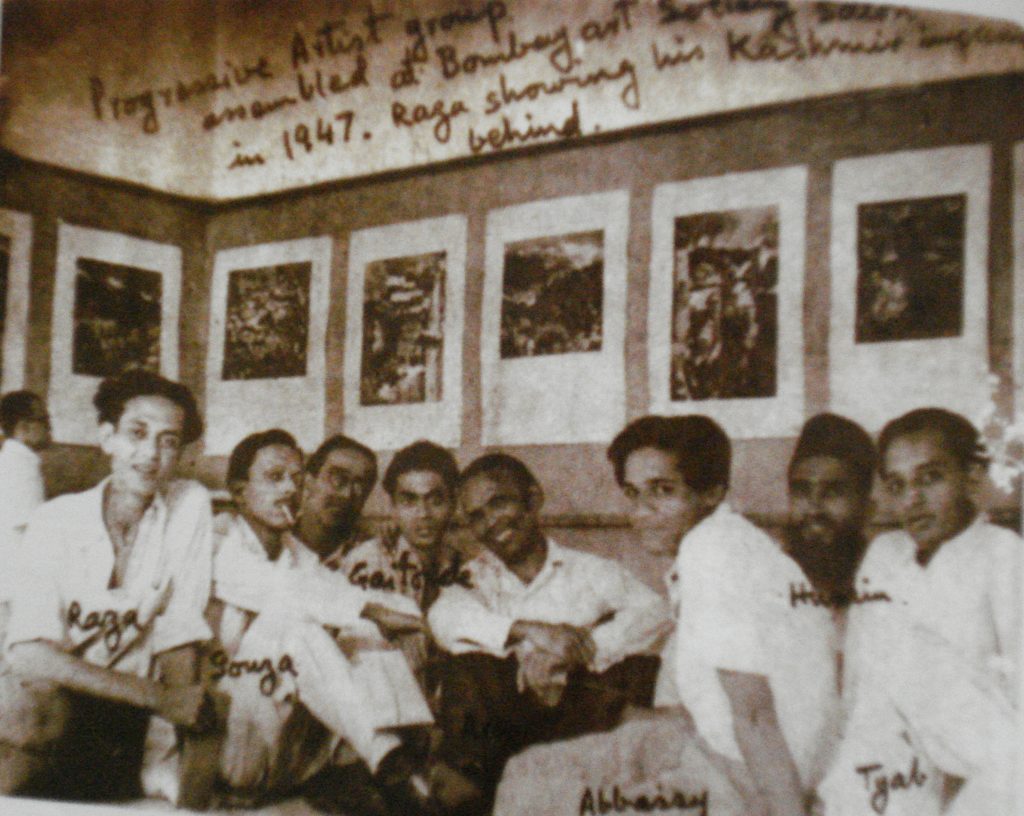 Bohemian, leftist and iconoclastic, the Bombay Progressives sought to shake up the art scene in Independent India. Formally called the Progressive Artists Group, this collective of six born in 1947 wanted to create a ‘new avant-garde’, that would speak for a fledging nation. The founding members were FN Souza, MF Husain, SH Raza, HA Gade, KH Ara and SK Bakre, although other artists came to be associated with PAG later. Their perspectives were hugely influenced by the Indian freedom struggle and the tragedy of the Partition, but their imagination was inflamed by the works of European masters like Matisse, Picasso, Monet and Cézanne. They would support upcoming artists who wanted to break away from the existing order, which favoured the Bengal School and the Royal Academy way of interpreting India, and create something new through their experiments with rising trends in world art, like cubism and abstractionism.

The Sarmaya collection houses many works by the artists who shaped and were in turn shaped by the idealism of PAG. Their work would set the tone for modern Indian art for years to come. 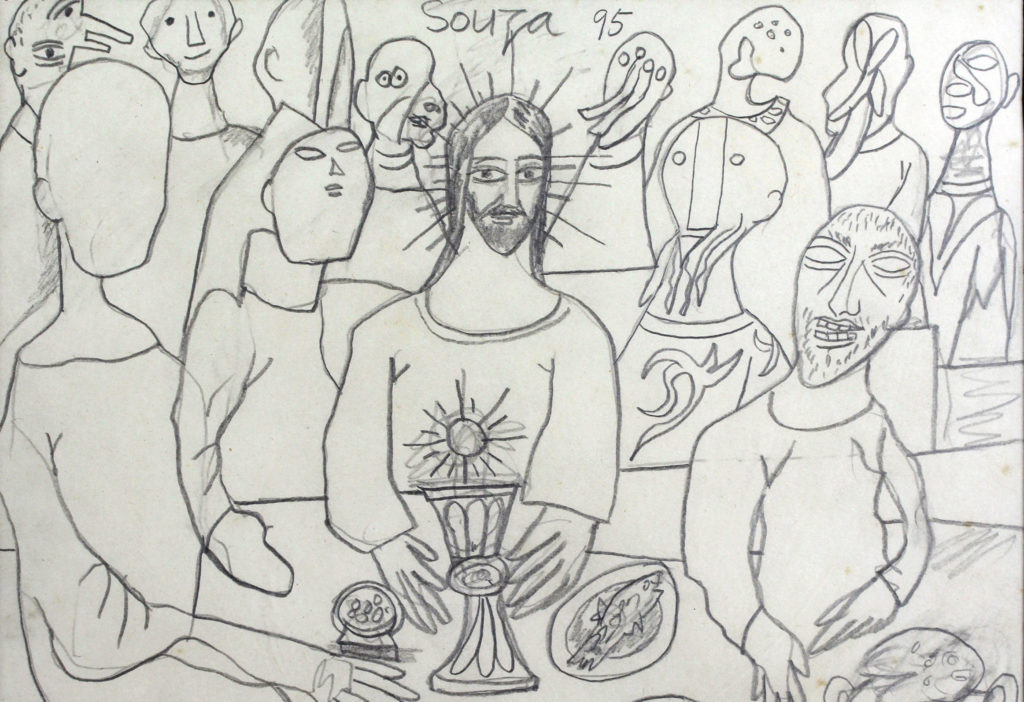 Souza believed that art offered the only respite for man, who would die of boredom in the absence of it. His works betray this sentiment; every piece of his artistic repertoire is charged with his lived moments, every piece portrays an overflowing passion.

Brought up in a strictly Catholic environment, expelled from both school and college for his rebellious and ‘blasphemous’ nature, Souza would go on to become a founding member of the PAG and one of the most sought-after artists in the international art markets. His blunt, extreme style, borrowing from spirits of cubism and sculptures of Indian classical traditions, found form in many types – nudes, landscapes, ‘heads’, portraits as well as religious themes.

His preferred mode was that of direct assault, rather than attempting to use metaphorical imagery, which resulted in shocking the viewer. Much of this assault was aimed at the Catholic church and what he saw as the hypocrisy of religion. He created a large body of work on Christian religious imagery and biblical themes such as the Last Supper and the Crucifixion. He had also developed a kind of voyeuristic gaze very early in life (at the time, he also confessed to making a peep hole in the bathroom door so he could watch his mother take a bath) which later manifested itself in the nudes that he created.

He was the first artist of Independent India to receive recognition in the West, while remaining sadly under-appreciated in the land of his birth. In India, his art was respected and valued only posthumously. 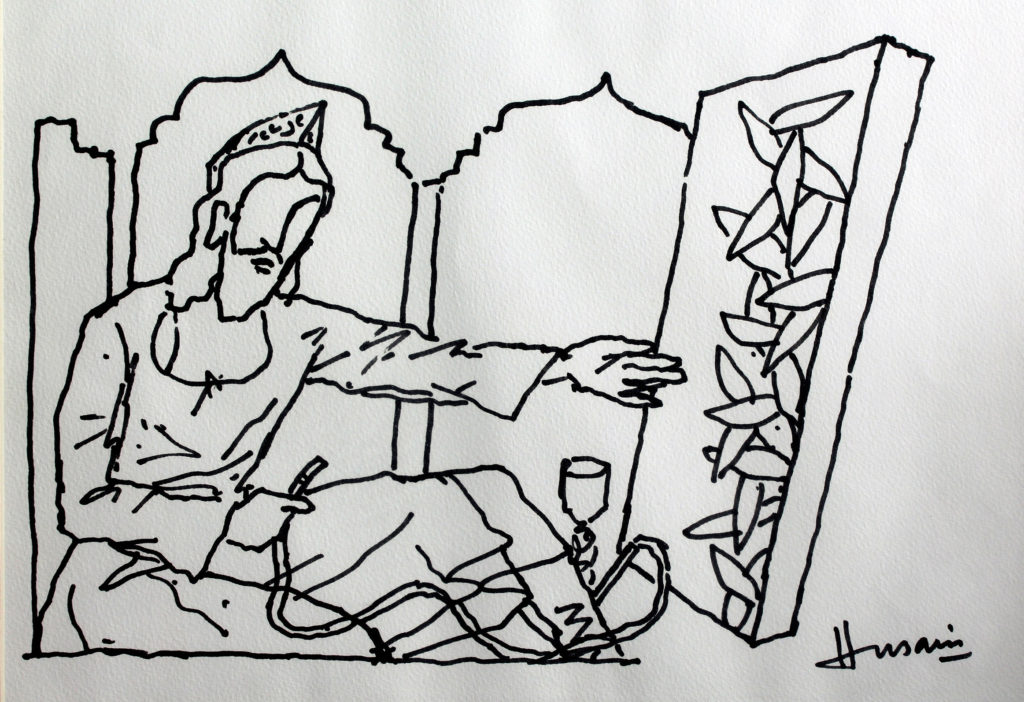 ‘Self portrait with leaves’ by MF Husain

A self-taught artist, born in the small town of Pandharpur in Maharashtra, MF Husain has had an extraordinary career. It began with painting cinema posters and toys in Bombay and only really took off after he became a member of the PAG. He was an artist always in transition; forever moving cities, countries, professions, as well as painting mediums. From painting, to poetry and performance, from installation art to cinema – Husain experimented with multiple mediums and genres through his illustrious life and career.

His primary pictorial concern was to imagine a secular modern Indian art, to create a visual language that would appropriately translate the country’s composite culture, and to develop an artistic mosaic that was steeped in imagination, myth and symbolism.

His subjects ranged across a broad spectrum: from everyday observations of people at work to allegorical themes inspired from religion, history and mythology. The horse became an important part of his artistic oeuvre since his first representation of the animal in 1951. They are shown as powerful creatures, galloping ahead, often with reared heads and tremendous movement.

Speaking about the symbolism behind them, he once said, “My horses like lightning, cut across many horizons. Seldom their hooves are shown. They hop around the spaces. From the battlefield of “Karbala” to Bankura terracotta, from the Chinese Tse pei Hung horse to St. Marco horse, from the ornate-armoured Duldul to the challenging white of Ashwamedh… the cavalcade of my horses is multidimensional.” 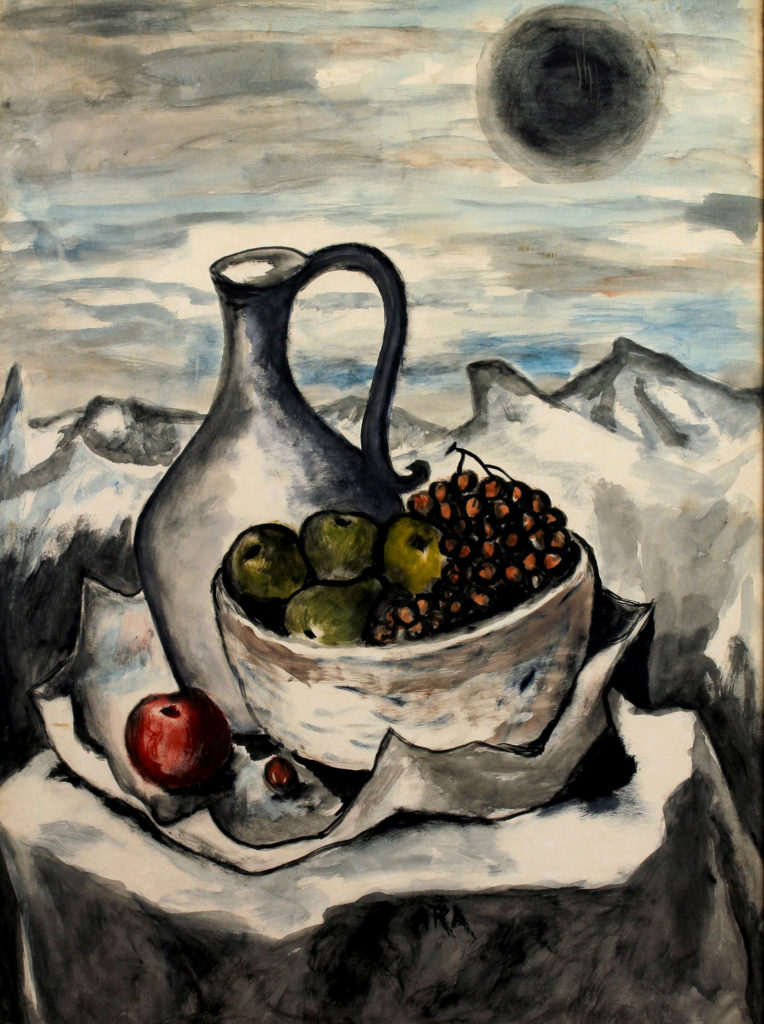 Still-life with vase and fruits by KH Ara

KH Ara was one of the founding members of the PAG. His artistic expressions were characterised by robust nudes and still lifes, marked by a life-affirming positivity and zeal. He was a self-taught artist who ran away from home to pursue his artistic career in Bombay.

His take on art and artistic processes was that of direct reportage, the intent was neither to shock the audience (like Souza) nor hark back to classical and folk art (like Husain). Ara managed to turn this art of the everyday into a potentially sensuous form, also becoming the first Indian artists to paint nudes from life. For him, the language of art preceded all other social and political motivations. His process and products were intuitive and spontaneous, not deliberate or ‘intellectual’. His was art for art’s sake, and in this way, he was a true modernist.

The Sarmaya collection holds another still-life of Ara, depicting a cream vase with red flowers. The background is created in ash, black and white – a typical characteristic of Ara works, where the foreground with the flowers in colours of tangerine and blood-red distinctly stand out. 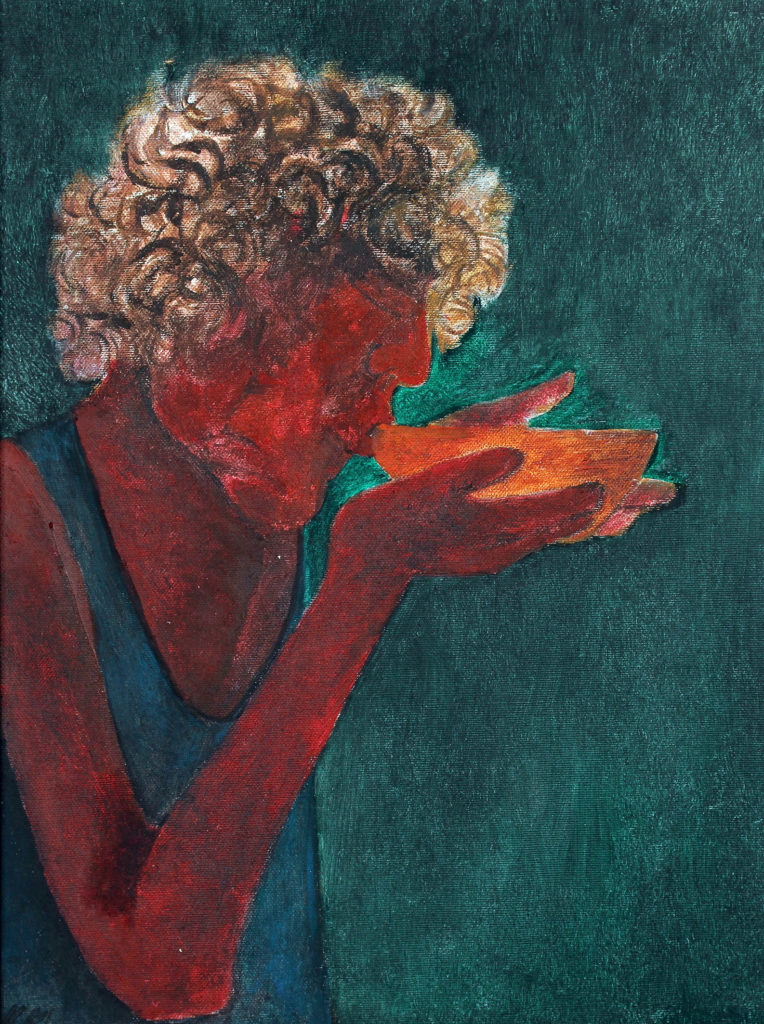 ‘Study for Emmaus’ by Krishen Khanna

Krishen Khanna was born in pre-partition Punjab and moved to Bombay to work as a banker. Art had been a constant interest in his life, and in Bombay he became associated with the PAG. He continued his art practice simultaneously with his day job at Grindlay’s Bank, largely creating works that bore imprints of the traumatic experiences of the Partition.

He also had a continued interest in biblical themes, but his attempt was to always render them in an Indian narrative. Under this large genre, he created a body of extremely moving works, always relating episodes from the Bible to lived realities: the sufferings of Christ became the sufferings of every-man, apostles gathered at the Last Supper turned to tired men conversing around the dinner table after a hard day’s labour.

His works are also infused with a signature theatrical set-up, and a pervading atmosphere of mystery and suspense; men whisper into each other’s ears, point fingers or deliberate over something huddled in small groups. 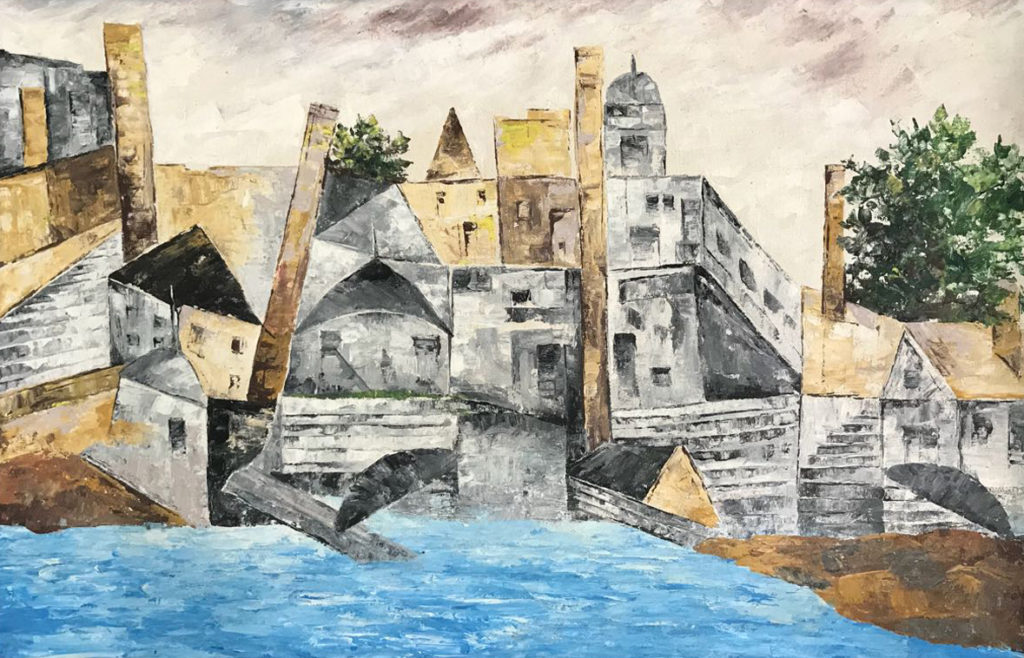 From the ‘Varanasi series’ by Ram Kumar

Ram Kumar, also a PAG associate, began his career as a figurative artist, later shifting to abstraction. His abstracts are devoid of the usual, recognisable constituents of a landscape – there are no trees, or land, water or sky. The canvas is filled with swathes of colours, creating conflicting planes that somehow coexist and cohabit, leading the viewer to evoke a mental landscape. His landscapes are creations of the mind deriving from the viewed, the internalised and the imagined.

Ram Kumar was attracted to cities. He once said that every city he has visited in life has impacted his work – but none so much as the city of Banaras (Varanasi). He first visited the riverside city in 1960 with MF Husain, stayed at the ancestral home of the writer Premchand, and painted all day for ten days. The place struck him both visually and psychologically to a great extent—the mass of people bound by the unimaginable power of faith, the widows living in penury, the old and sick waiting to die, the dead bodies carried away by the ever-flowing river—life and death somehow coalesced in this city, and lost their meanings. He was moved so much by the landscape of Banaras that he transitioned from figurative to abstract in his artistic production, never to return.

Padamsee, an associate of PAG, was still a student at the Sir JJ School of Art when the group announced itself in the Indian art scene with their first exhibition. He later went on to have an illustrious career of his own.

Padamsee’s artistic oeuvre deals with a formal exploration of a few chosen themes, like prophets, heads and couples, across all mediums. His works convey a strong command over time, space and colour and are heavily inspired by the tenets of ‘formalism’. He religiously adhered to recognisable forms, all other imagery being derived from there. He also took a deep interest in Sanskrit literature and classical Indian writers such as Kalidasa.

In his portraits or ‘heads’, the concern with the construction of form dominates, leaving identification to become a secondary motive. In all of his artistic works, the only identifiable portraits ever created were those for his Gandhi Series in 1997.