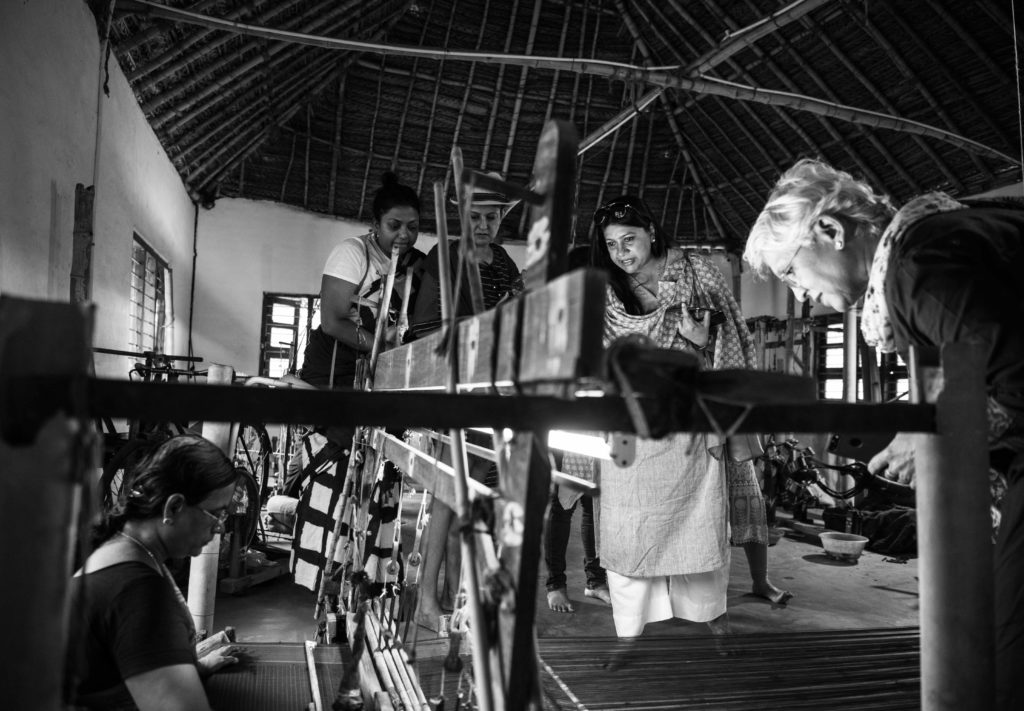 For centuries Tamil Nadu has enjoyed the distinction of being a flourishing hotbed for textiles: it is believed that for every 100 kilometers traversed you’ll be treated to a new weave. The Kandangi sari, among the state’s oldest weaves (almost 250 years), was introduced and patronised by the wealthy Nagarathar community of Chettinad. There’s very little that’s known and documented about its origin and the etymology of Kandangi itself. This was the impetus for Visalakshi Ramaswamy, for whom the textile has become somewhat of a passion project, to initiate a number of projects to revive the sari through her organisation, the M.Rm.Rm. Cultural Foundation. Ramaswamy, who hails from Chettinad and lives and works in Chennai now, also has a book coming out on the subject. “I’ve seen Chettiar women, three generations before mine, own and wear these saris; I’ve seen them in other people’s wardrobes and I’ve worn them for many years. I’ve also managed to acquire some proof of where it was woven in Chettinad,” she says. 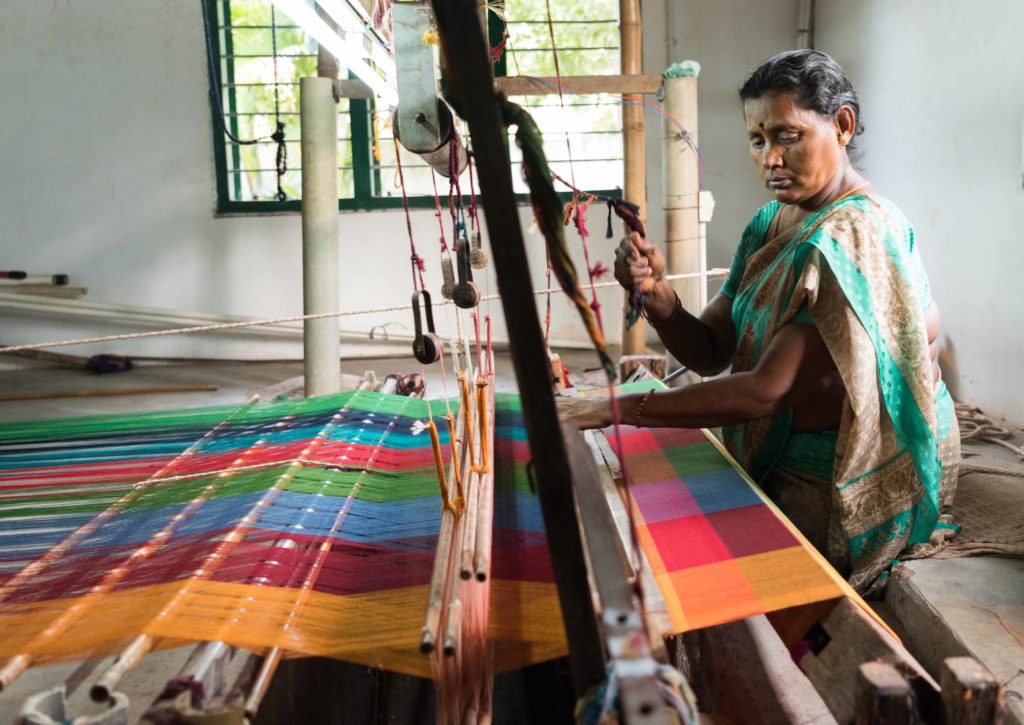 Kandangi saris are characterised by their striking colour combinations, tall borders (some of the saris are known to have borders covering about two-thirds of the sari), and the use of bold stripes and checks. Traditionally, the colour palette was restricted to brick red, black and mustard, owing to the easy availability of mancatti or Indian madder and manjal or turmeric for dyes. “Blue and green would’ve involved indigo and historically indigo didn’t grow in and near Chettinad,” Ramaswamy explains. 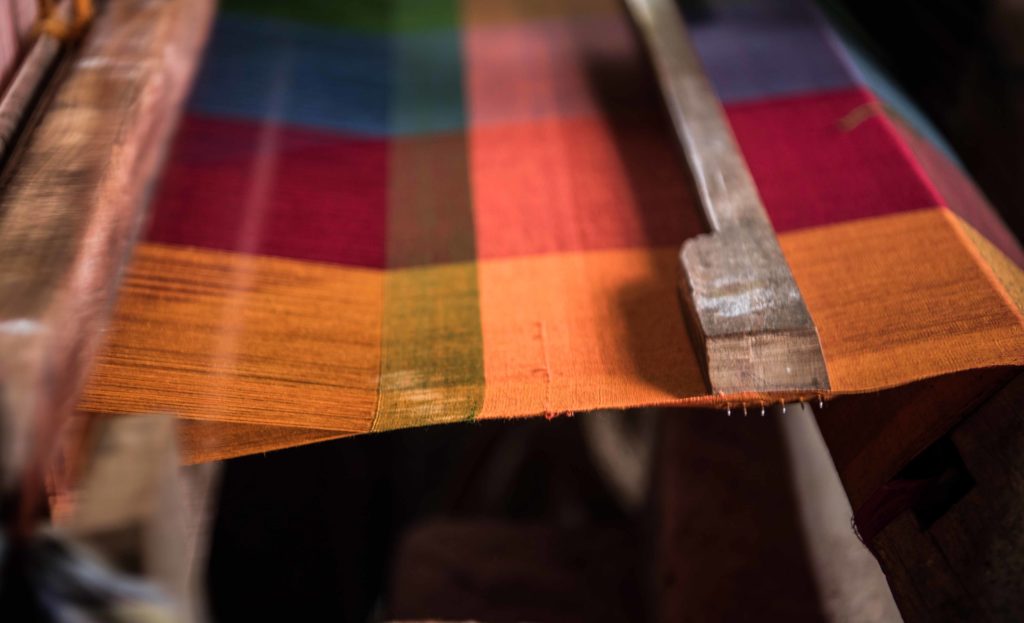 Kandangi saris were woven in silk, cotton and a mixture of the two. The silk saris were worn on occasions like weddings and were regularly washed. Once the fabric became soft, the saris would be relegated to daily wear. The cotton Kandangi saris were typically not worn by the Chettiar women. These, instead, were given to the help at home and were reserved for women belonging to other communities in the region.

“Nothing ever tore and that’s the whole story,” says Ramaswamy breaking into a broad smile adding, “After getting enough wears from these saris, they used to be turned into little tottils or cradles in which infants could be placed and rocked.”  It’s one thing that the saris were durable enough to be repurposed after their primary use but this could also be attributed to the zero-waste culture prevalent in Chettinad at the time. “The land was not fertile. So anything that could be saved was saved and anything that could be reused was reused. As a result most of these saris eventually ended up at the antique shops. You won’t find them there now, though.” 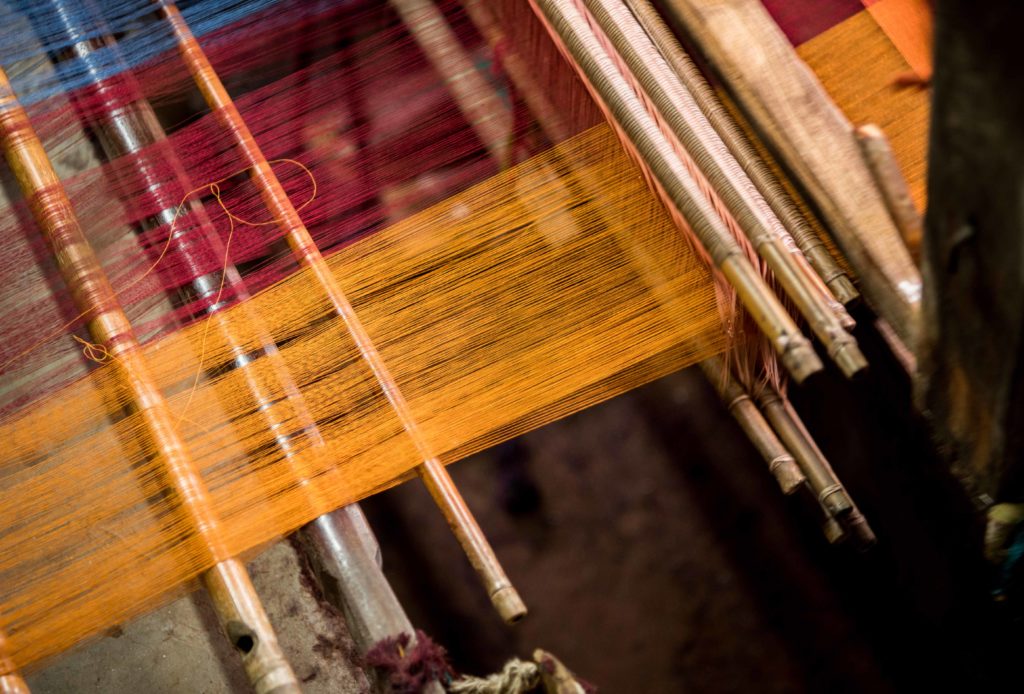 Kandangi saris were woven using frame looms and pit/fly shuttles. The pannai or needle frame was specifically made for this purpose by artisans in Nelakottai using hand-spliced bamboo. The bamboo sticks had to be handpicked so they would have just right amount of tenderness. The warping was usually done for four saris together, which roughly measured about 22 meters of cloth.

The Chettiars set up a weaver’s village just outside the town of Karaikudi where Kandangi saris were woven. Ramaswamy, through her research, has concluded that these weavers migrated to Chettinad from the Saurashtra region. “They’re not Tamil. They all speak in Kannada or Marathi. You’ll find a few Tamil weavers here and there,” she says. There are about 200 weavers in and around Karaikudi today operating through three weaver societies. There used to be thousands originally organised in about 50 groups. In 2016, the Union textile ministry conferred the Indian Handloom Brand tag on Chettinad cotton saris, enabling them to be promoted in international markets. 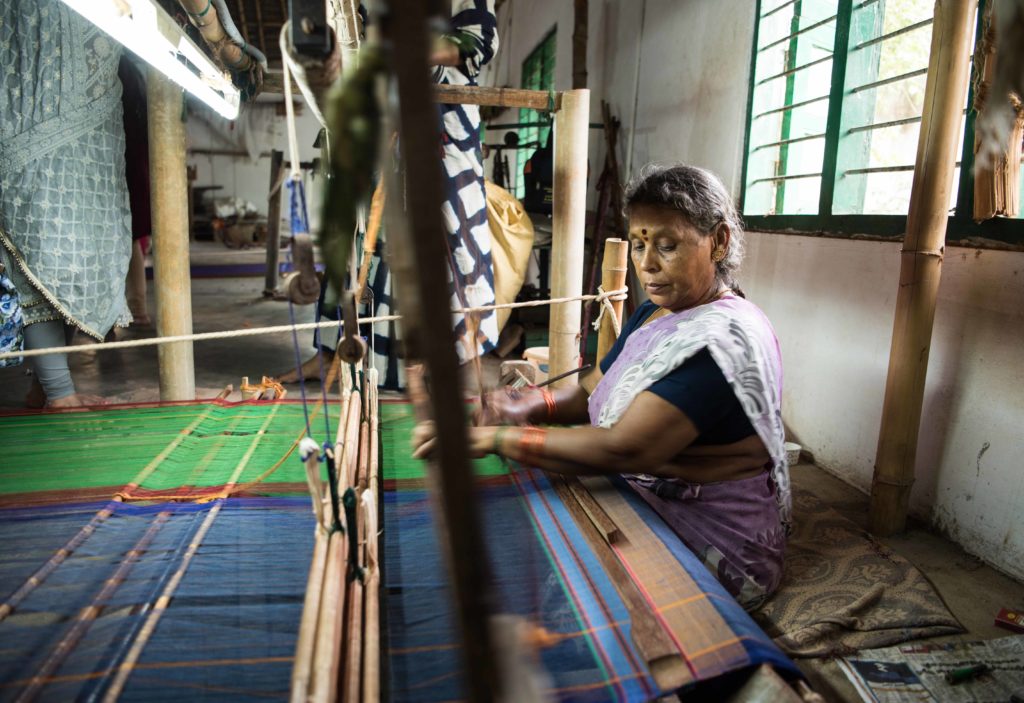 Ramswamy started out by creating a design directory of the old Chettinad saris that she could lay her hands on to enable easy reproduction in future and to prevent the designs from getting lost. She has reproduced Kandangi saris several times in silk, cotton and silk cotton and has also introduced design interventions to produce newer iterations that don’t stray too far from the original. “Nobody wants to wear saris that thick today. I wore them for a few years but even I find them too thick now. The copies are very popular. Which is why I felt that saving the design was as important as saving the weaving technique.”

These saris have been retailed through exhibitions in Chennai and have been very popular with urban customers. But Ramaswamy finds it challenging to produce these saris of late because the weavers have moved on to more lucrative weaves and it is difficult to get them to produce these saris in smaller quantities. “The weavers are doing all kinds of different things today. And sadly everything is called a Chettinad sari!”