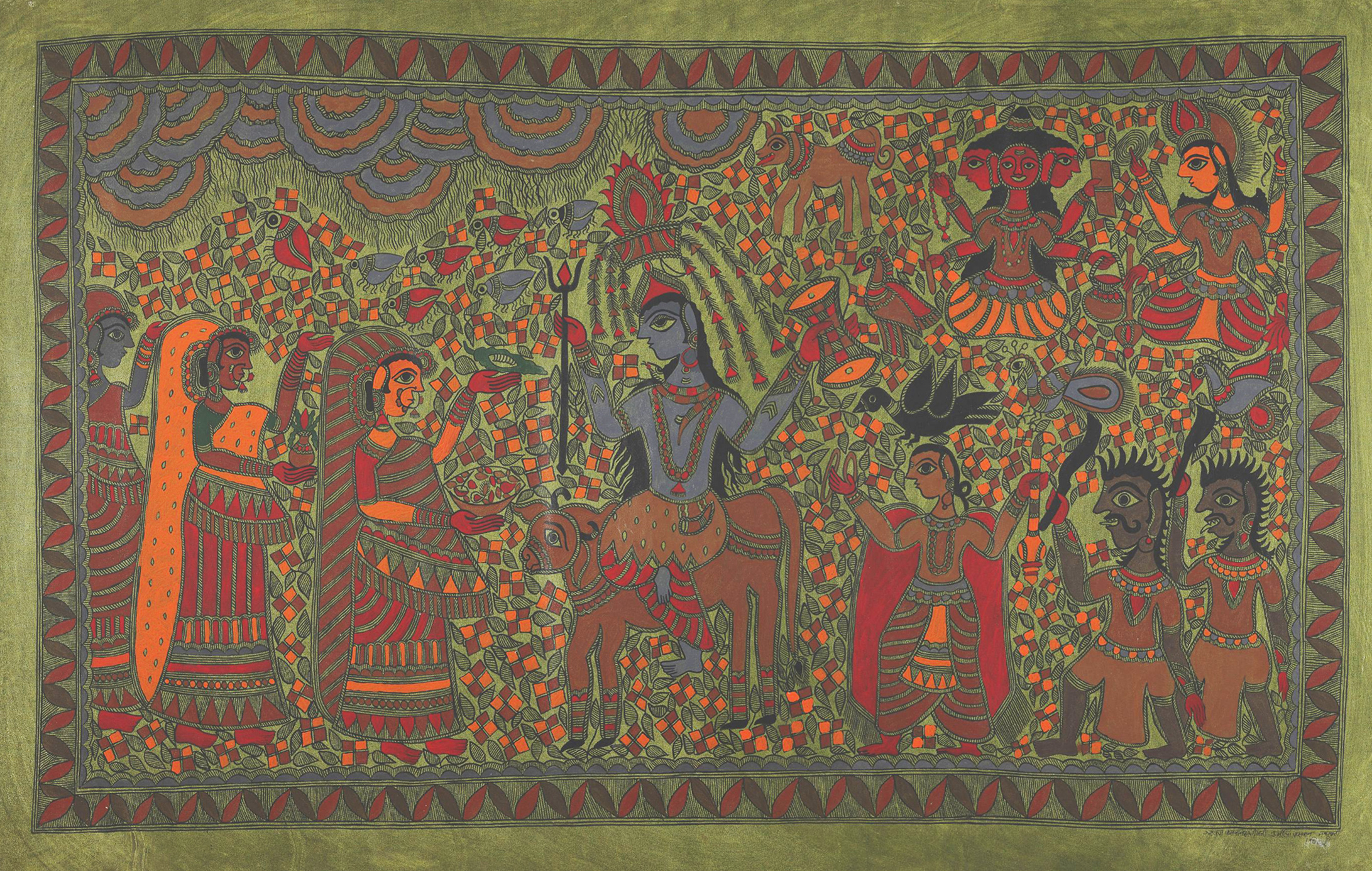 Mithila painting is a traditional mural artform from Madhubani district, Bihar. The artform is known to be a woman’s preserve, one that has roots in the wedding rituals of the Maithil community. Today, many artists from both genders create canvases filled with depictions of religious gods and symbols, socio-political issues, and rural and natural life. Over the years, Mithila art and artists have acquired tremendous popularity among national as well as international audiences.

This painting created by Urmila Paswan and Shravan Paswan follows a religious theme. It depicts Shiva seated on Nandi with a Trishul. Godna artists did not predominantly use Shiva and other popular gods from the Hindu pantheon. But as the medium shifted to canvas, the subjects have shifted according to popular demands. On the left side, the painting depicts three female worshippers, one after the other. Each of them is holding an offering. On the right, a male figure, possibly Narad, and two demons appear. Above these figures, a three-faced Brahma and another male figure, most probably Vishnu, is depicted. The remaining space in the canvas is decorated with flowers, birds and geometric designs, made in a horror vacui aesthetic.

Urmila Devi Paswan is a 68-year-old senior artist from the folk tradition of Mithila. She is from the Jitwarpur district and was one of the first artists discovered by Bhaskar Kulkarni. Bhaskar Kulkarni saw her wall paintings and urged her to move to canvas. This new medium helped Urmila Devi to express and showcase her work in India and abroad. She has been painting Mithila art for nearly 50 years and has a permanent place in the studio of Manisha Jha, who is a Delhi based artist. She has won numerous awards such as the ‘Kalidas Samman’ by the Madhya Pradesh government and is a member of the board of directors of the Mithila Art Institute.

Her painting style dabbles in both the geometric and figurative form of Mithila art. She is one of the most proficient artists of the ‘Godna’ tradition. Godna tradition is the tattoo art that Mithila women paint on body as well as on house walls. She usually paints abstract narratives using figurines in geometrical patterns- lines, squares, circles, etc. Being from the Dalit community, Urmila Paswan paints stories of local dieties like Raja Salhesh as well as mainstream stories like that of Krishna and Radha. Her five children: Shravan, Manuj, Ranju, Anju and Sanju are all involved in the painting tradition as well.