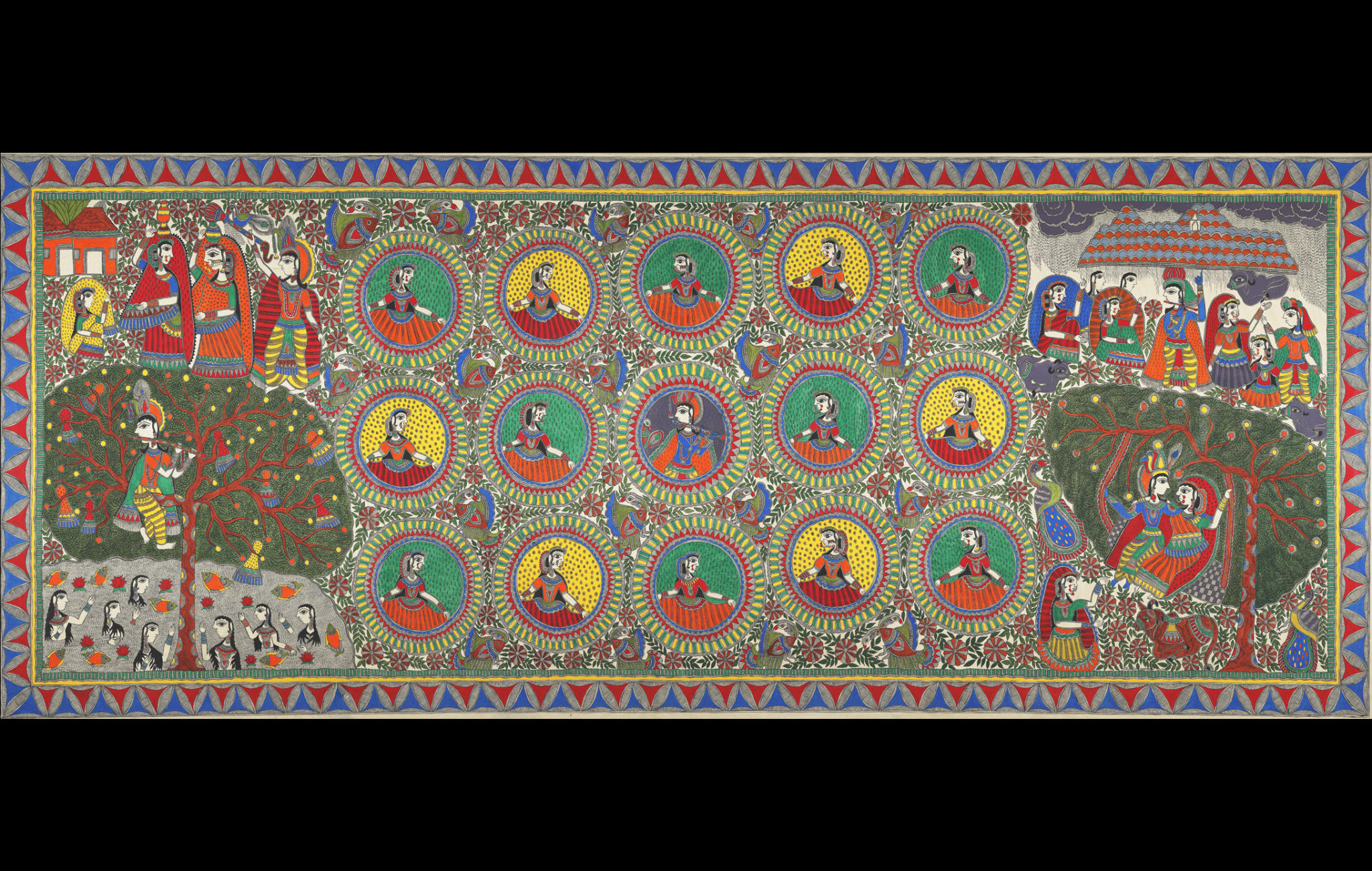 This painting created by Urmila Paswan and Sharavan Paswan follows a religious theme. It depicts popular instances from the life of Lord Krishna as propagated in the tenth book of the Bhagwat Purana. At the centre of the composition, Krishna and several women referred to as Krishna’s ‘gopis’ are depicted inside circular decorative motifs. With Krishna playing his flute and the Gopis holding their skirts (typical of the raas/ play postures), this segment is reminiscent of the episode of ‘Ras Leela’. On the top right, we see Krishna lifting up the Govardhan mountain to provide shelter to the villagers, as described in the story. On the bottom right we see Krishna and Radha on a swing set suspended from a tree, pointing towards the common iconography of Radha and Krishna in temples. On the left, Krishna is seen seated on a tree with the stolen clothes of the gopis who are taking a bath in the river.

Urmila Devi Paswan is a 68 year old senior artist from the folk tradition of Mithila. She is from Jitwarpur district and was one of the first artists discovered by Bhaskar Kulkarni. Bhaskar Kulkarni saw her wall paintings and urged her to move to canvas. This new medium helped Urmila Devi to express and showcase her work in India and abroad. She has been painting Mithila art for nearly 50 years and has a permanent place in the studio of Manisha Jha, who is a Delhi based artist. She has won numerous awards such as the ‘Kalidas Samman’ by the Madhya Pradesh government and is a member of the board of directors of the Mithila Art Institute. Her painting style dabbles in both the geometric and figurative form of Mithila art. She is one of the most proficient artists of the ‘Godna’ tradition. Godna tradition is the tattoo art that Mithila women paint on body as well as on house walls. She usually paints abstract narratives using figurines in geometrical patterns- lines, squares, circles, etc. Being from the Dalit community, Urmila Paswan paints stories of local dieties like Raja Salhesh as well as mainstream stories like that of Krishna and Radha. Her five children: Shravan, Manuj, Ranju, Anju and Sanju are all involved in the painting tradition as well.

Untitled (Ras Leela and other episodes from the Bhagwat Purana