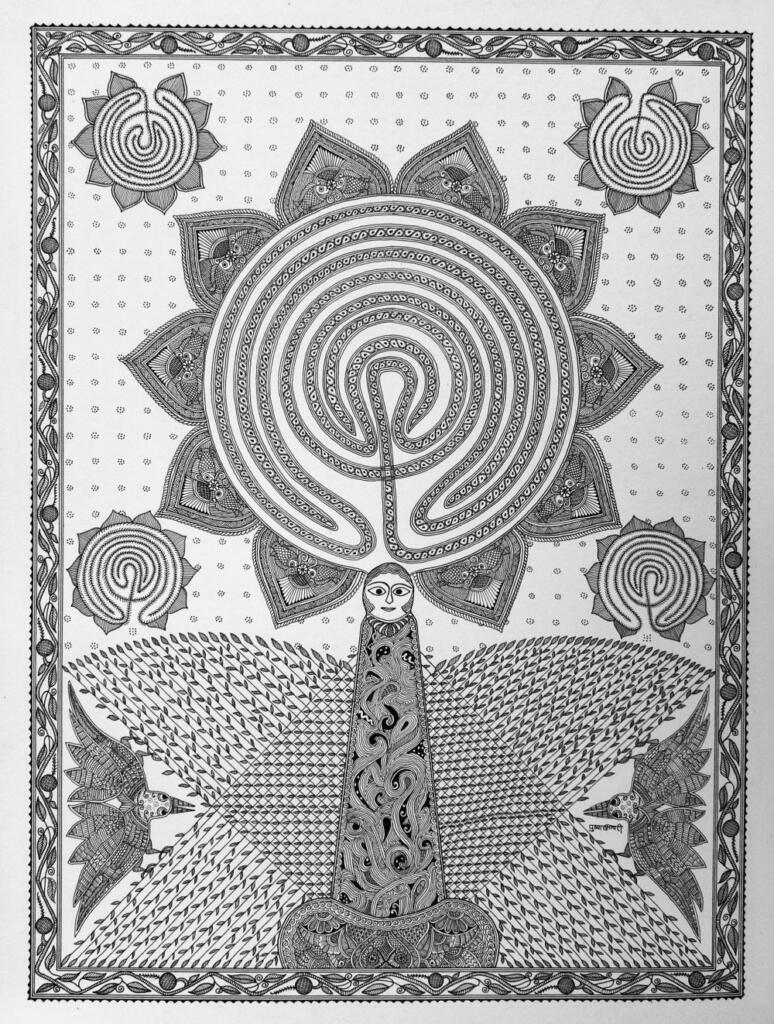 “This painting showcases the ‘Garbha Chitra Aripana’. It is an aripana design drawn to commemorate a young girl approaching the age of puberty. [It is] drawn on the first day of menstruation in a girl’s life, the day she begins to embody ‘Prakriti’ (Mother Earth) itself. Her fertility is equated with the earth that provides and sustains the life of all beings. The puberty rituals are no longer followed, this is why the aripana is very rarely drawn or seen today.”

The brilliant and prolific Madhubani artist Pushpa Kumari sums up in a few lines the traditions linked to her painting and the larger themes of the art itself. Traditionally practiced by women and girls, Mithila or Madhubani art is rife with creative expressions of the feminine experience with relation to body, fertility and sexuality. By visualising their fertility in relation to nature and clothed in the colour of folk tales, generations of Maithil women have learnt to place their narratives in a more universal context. Using the same lexicon, several artists have made forays into other genres of craft and art too. Among them is Pushpa Kumari, whose aesthetic genius combines the traditional with the contemporary, as well as the personal with the political. 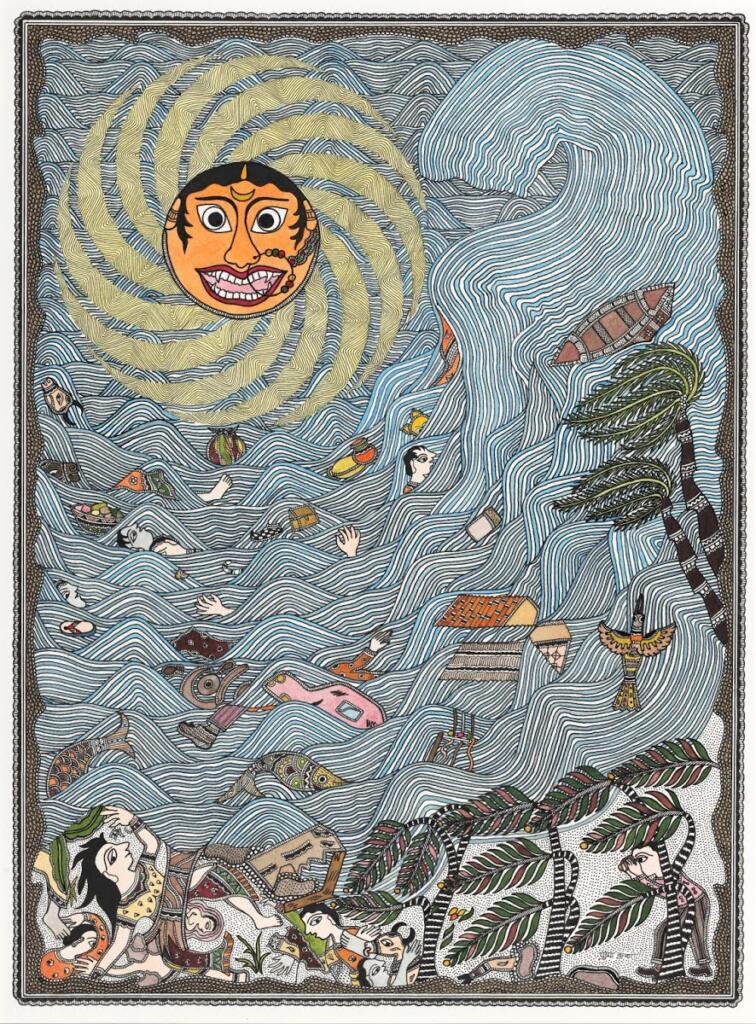 Pushpa Kumari was born in 1969 in the village of Ranti of Madhubani district. She lived with her maternal grandmother Mahasundari Devi, who was among the first generation of commercial artists responsible for popularising the Mithila artform. Pushpa Kumari grew up surrounded by art, listening to myths and legends recited by her grandmother. Like most girls of her community, she started painting at a very young age. She says, “You could say I was 13 or 14 when I started making complete compositions but I had been painting years before that as well. I learnt mostly by observing my grandmother. I remember being still in my teens when I began accompanying my grandmother to various national and international trips. My earlier paintings were mostly traditional—I still do these if and when a patron or project requests it.” 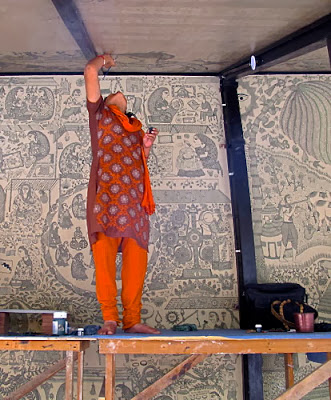 The artist at Delhi Craft Museum, image from Art Found Out by Scott Rothstein—click for source 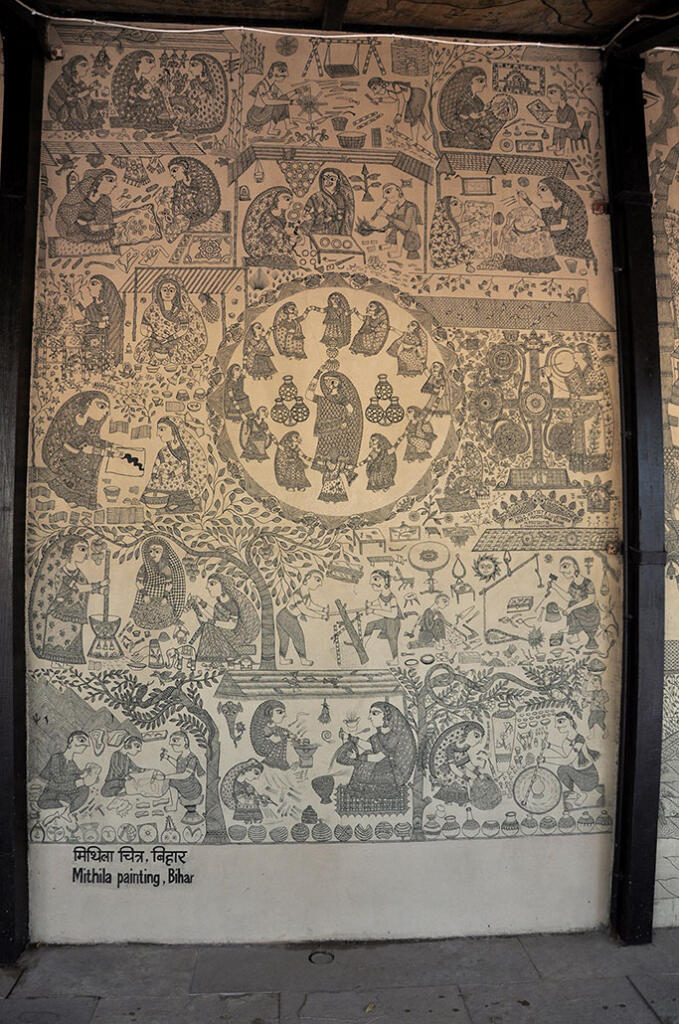 Pushpa Kumari gradually moved from traditional renditions of kohbar and deities towards obscure folk tales and social and political commentaries, created in a visual language that comes entirely from her imagination. “Most of my work is influenced by my lived experiences or it happens subconsciously. I was not exposed to a variety of artwork growing up nor am I tech savvy to be able to intentionally develop upon my interests. I paint simply what I witness and what pours out of my imagination”. One of the paintings that stand out from her early career is the mural at the Delhi Crafts Museum. “I was told to paint vocations that are now extinct or endangered, traditional occupations from Bihar, like a ‘Lohar’ (metal fabricator) or a ‘Kumhar’ (Potter). I depicted my grandmother painting as well.” In this mural, the artist reveals her unique visual language through objects like the one-legged table or the pearl drop-shaped mirror dresser placed in a village setting. She also creates a meta image by showing Mahasundari Devi painting the kohbar. The artists themselves had never before been explored in the Madhubani style. 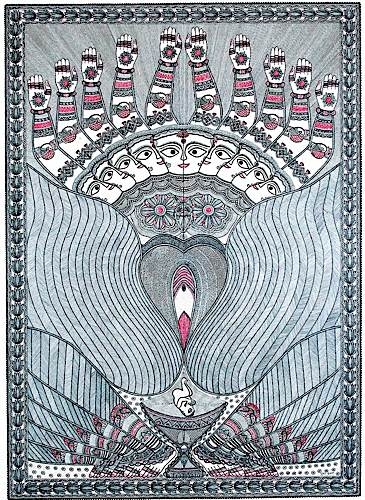 Mahashakti by Pushpa Kumari, image from MutualArt.com—click for source

“It was in Delhi that I received active patronage and my work gained popularity—much of the foreign patronage came from meetings at the Delhi Crafts Museum,” says Pushpa Kumari. “This was a pivotal moment in my artistic journey, I began experimenting, focusing on different kinds of motifs and stories for my patrons and different collaborative works. This is when I created Mahashakti, which people have named Yoni, but the focus of that painting was not to depict the sexual organ of the Goddess, it was instead intended as a narrative painting depicting the first human being born on Earth under the nurturing presence and blessings of Mahashakti.” For the past 15 years, Pushpa Kumari has been living in Delhi. Her style is characterised by bold striking figures and intricate parallel lines creating beautiful patterns in and around the focal point. Though colour is seen in some of her paintings, she seems more comfortable with an ink bottle and a thread or a simple pen. 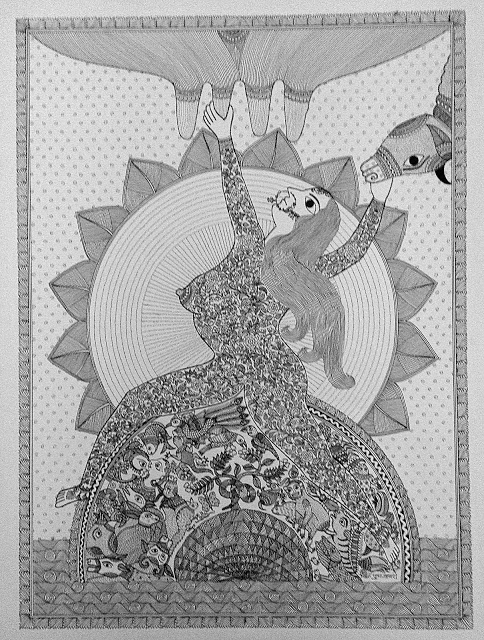 Mithila paintings are infused with symbolism and Pushpa Kumari masterfully interprets obscure mythological stories in her monoscenic narrative art style to express her concerns on themes like gender, social injustice and environmentalism. In the work titled ‘Earth II’, she uses the story of Goddess Prithvi to highlight the oppression of nature by human civilization. On the narrative painting called Earth Exploitation, she says, “When mankind established an agricultural society, an unquenching demand for resources followed and thus began the exploitation of Mother Earth. Distraught by fulfilling the demands of her greedy children, Goddess Prithvi takes the form of a cow and swallows all objects that are essential to sustain humanity. The world falls in utter chaos on earth, the humans beg the Goddess for mercy. Goddess Prithvi then grants them forgiveness and allows herself to be milked.” This rendition in its epic line detail is nothing short of breathtaking. Prithvi appears in three forms: as earth, a woman and a cow. In the backdrop is the lotus, the ever-present symbol of femininity in Mithila art. 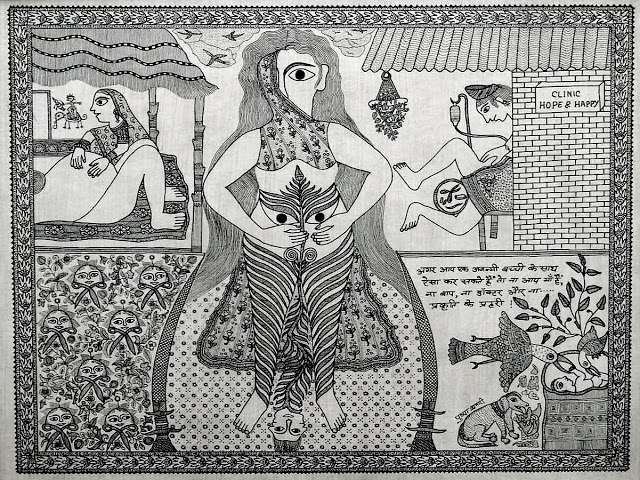 Painting on female foeticide by Pushpa Kumari, image from Art Found Out 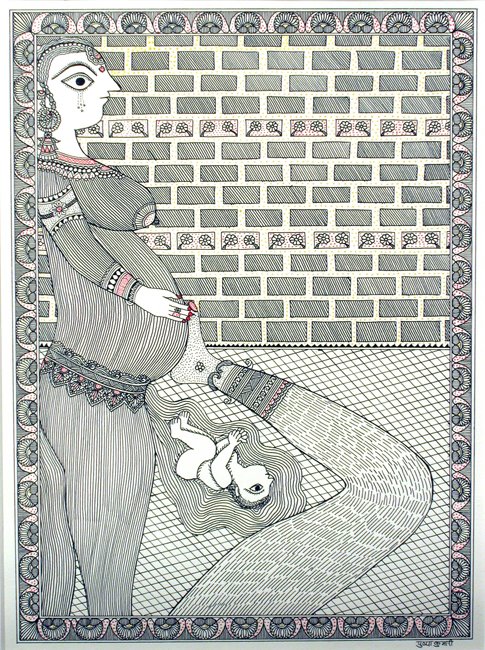 Painting on female foeticide by Pushpa Kumari, image from Art Found Out

While works like Earth Exploitation touch lightly on gender roles, Pushpa Kumari’s other paintings are more overtly feminist in spirit, including ones on dowry deaths and female foeticide. “How could I paint about these themes only once. Every painting is a different expression, a different message, even if the themes are the same”. Her most recent works are two paintings on the novel coronavirus, one colour painting and the other only in ink. Though patronage has been scarce during the lockdown, Pushpa Kumari stays focused on creating art and raising her voice through Mithila. 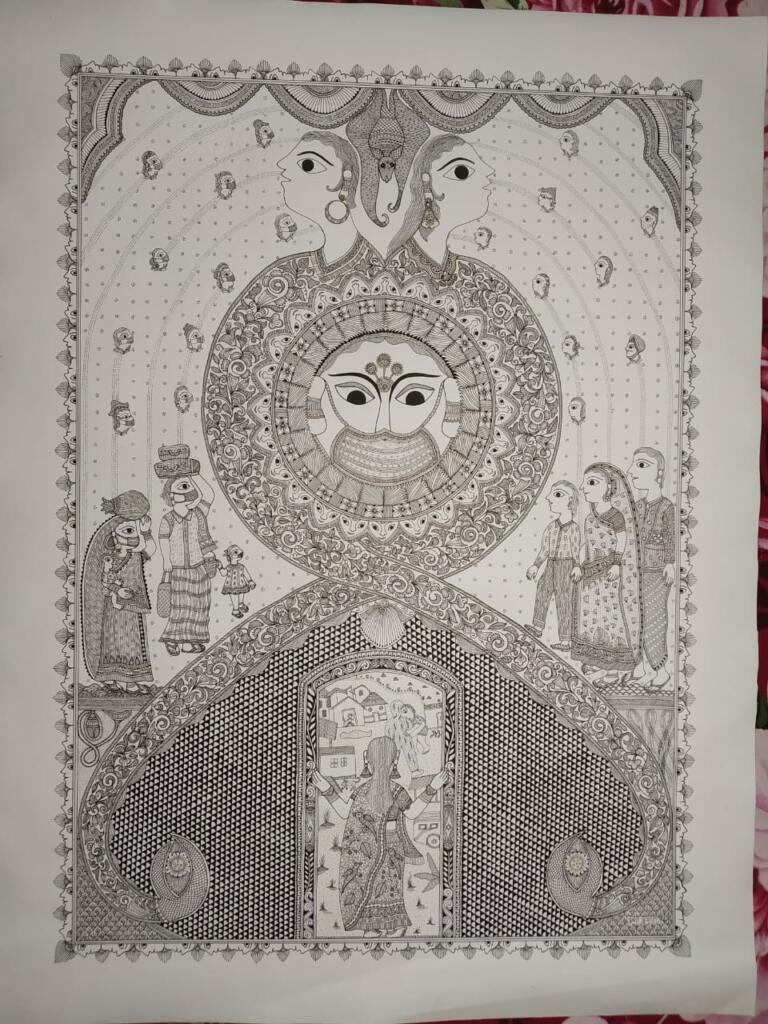