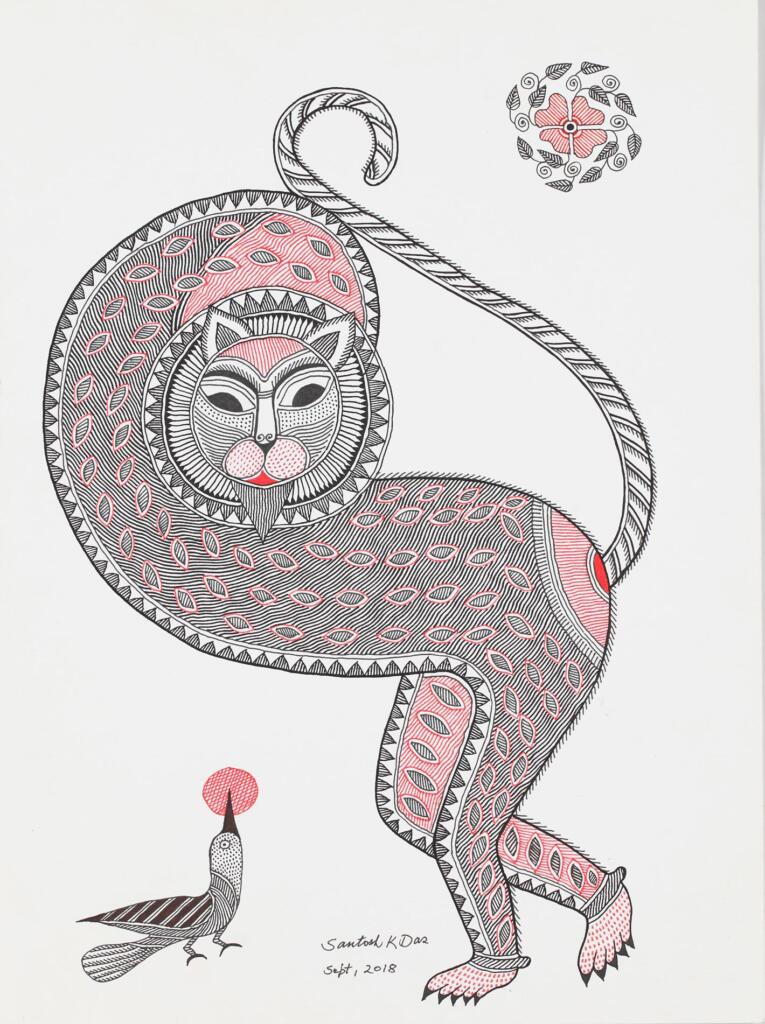 Every SK Das painting seems to offer a challenge and subvert a trope. But like a trapeze artist turning flips and doing pirouettes mid-air, he returns unerringly each time to solid ground, to the basics. Using such time-honoured Madhubani motifs like the fish, romancing lovers and festive episodes from Hindu mythology, he carves out fresh angles and new ways of seeing. A traditional fish—with an elephant nestled in its belly. An embracing couple—surrounded by a void. The birth of Krishna—announced with the flourish of a Bollywood movie poster. Leaping off a firm grounding of artistic legacy, Das soars free of the Kachni-Bharni binary and lands in a space that feels fluid, open and wholly his own. 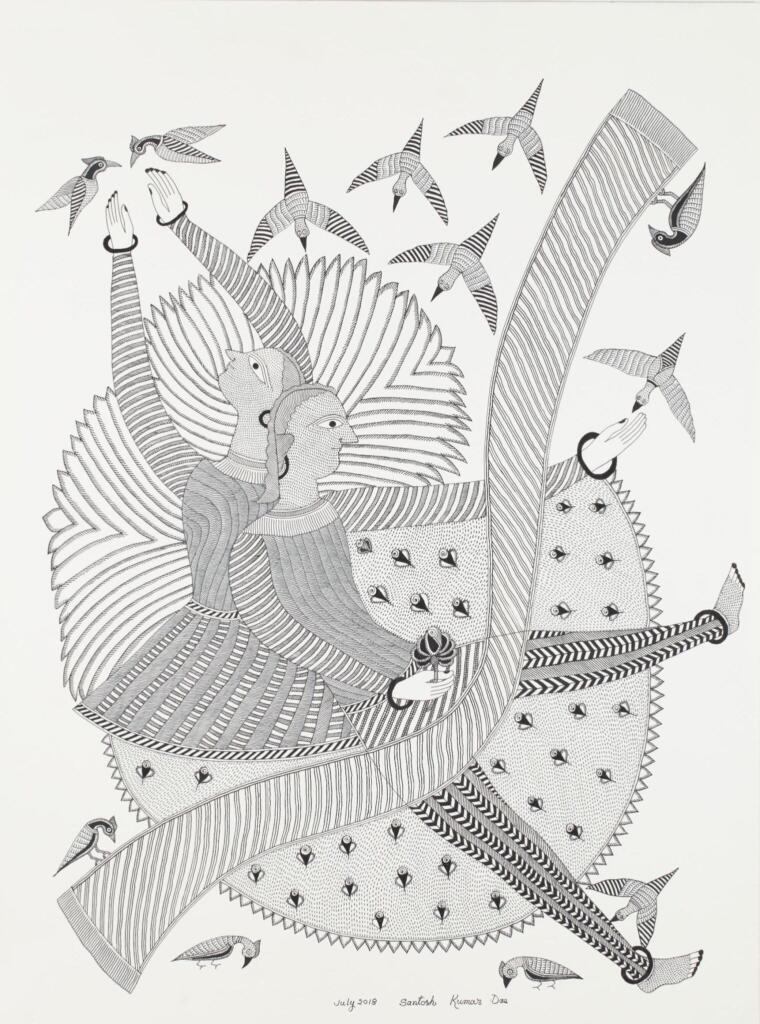 Sarmaya chatted with the artist who has been in Gurugram since the Covid-19 lockdown began in March this year. He has chosen to remain there for now rather than return to his home in Mumbai or Ranti, Bihar. This year, he says, he hasn’t felt like doing much work. “Rather I’ve been enjoying doing nothing. Even last year, I barely worked except for two months. It was a period of emptiness—this year is a solemnisation of the same experience. I’ve become more firm, strong and clear as a monk. I don’t think I’ve lost anything as an artist, either.”

The word ‘monk’ comes up a few times in our conversation, it’s one of the identities Santosh Kumar Das has chosen for himself. ‘Artist’ is the one he was born to as a native of Madhubani, who grew up steeped in an art form that stood on the cusp of world fame. In the 1960s, Das remembers seeing foreigners in their courtyard buying paintings from his mother and aunts. This made a huge impression on him, sparking his curiosity about the world/s outside his village. ‘Seeker’ is perhaps a good third word to complete the picture of a restless young man starved of beauty in 1970s’ Bihar.

“In my rural, derelict village there was nothing to see, just a few shops selling pictures and frames. I always liked things that were larger than life, like cinema. So I would go to the railway station to look at movie posters,” says Das, who would later find the exposure he sought at the Maharaj Sayaji Rao University in Baroda. After his graduation in 1990, he returned to Madhubani and dedicated himself to refining his craft. By then, he had found an ideal, a clear and pure goal to aspire to. It was articulated for him by an unassuming artist back home in Madhubani. 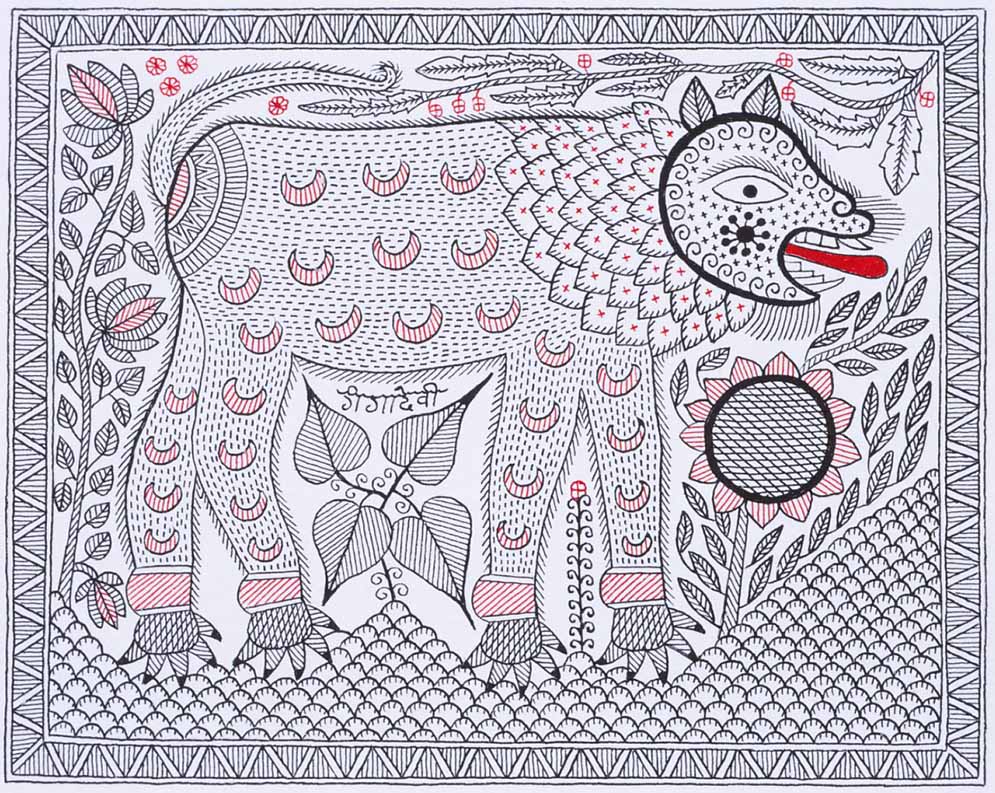 “Ganga Devi is the reason I’m a Madhubani painter and the reason I regard this as a great art form,” says Das, when asked to describe her impact on his early career. “She changed the tradition. Earlier, it was done in a ritualistic context but when she started, Madhubani acquired a very refined, a classical language. That impressed and mesmerised me. At the time, I considered myself to be on par with all other Madhubani artists of the time, including the women in my family. But when I saw Ganga Devi’s art, I could not believe my eyes. Her lines are very serene, like a magical evenness spread through the 22”-by-35” paper. Ganga Devi was a strong and formidable individual and when I saw her work, I thought I should paint like her or there’s no point, there’s no fun in doing Madhubani.”

It took a decade of focus to achieve the purity of form that he perceived in the work of the Padma Shri-winning, pioneering Mithila artist. Being from Ranti, Das was schooled in the restrained Kachni form, which focuses on the line as opposed to the colourful Bharni style practised in villages like Jitwarpur. His mother and her contemporaries would make the black pigment by hand out of soot and use a reed to draw on walls and later, on canvas. Das was always comfortable with using the colour black almost exclusively in his work, but Ganga Devi’s paintings showed him how it could be more. “Because of [Ganga Devi]’s personal, spiritual quality, her line begins to show a lot of things that are inherent in it. It’s what I see in Picasso’s work as well; it’s what helped him to explore multiple perspectives of the same human form. I grew a lot after returning from Baroda. After 2000, I was able to incorporate a kind of absence, a kind of detachedness in my art.”

Going into the black 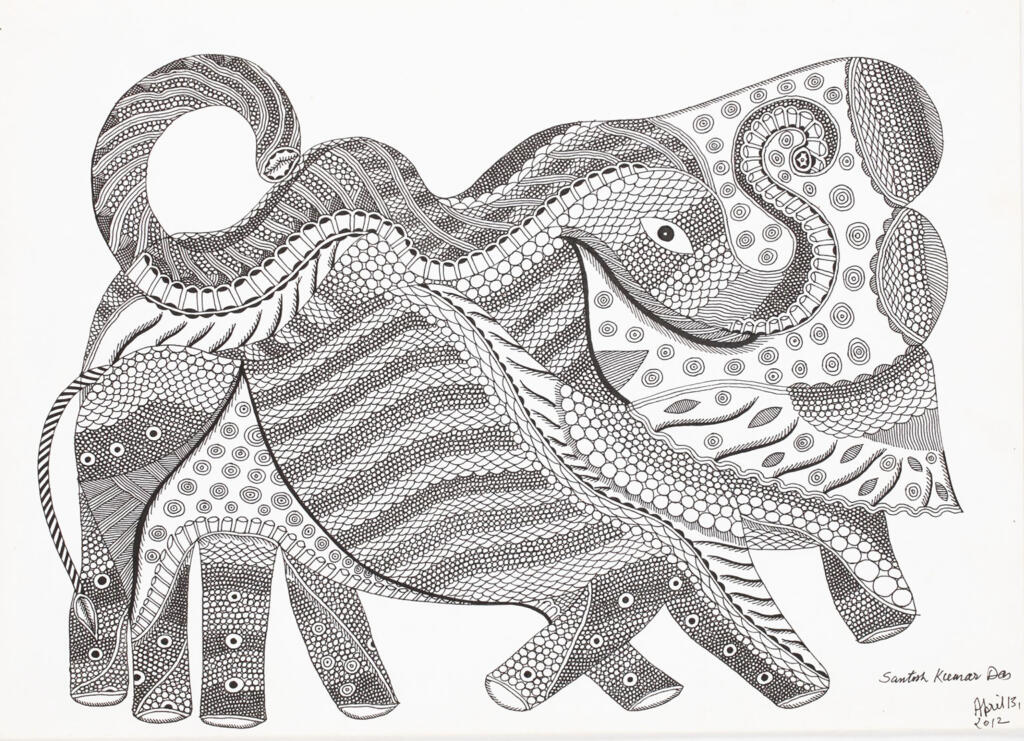 As he focused on reproducing the serenity he saw in the lines of Ganga Devi’s art, SK Das also felt a deepening commitment to his colour of choice. He says, “I saw everything in black lines for ten years. Black holds a certain magic for me. It’s a colour that is firm like a mountain. It doesn’t give in to distractions. This is also a quality I find in Lata Mangeshkar’s voice. The main notes are always firm, regardless of the noise around. Black brings you closer to the core, to the essence of your expression.” 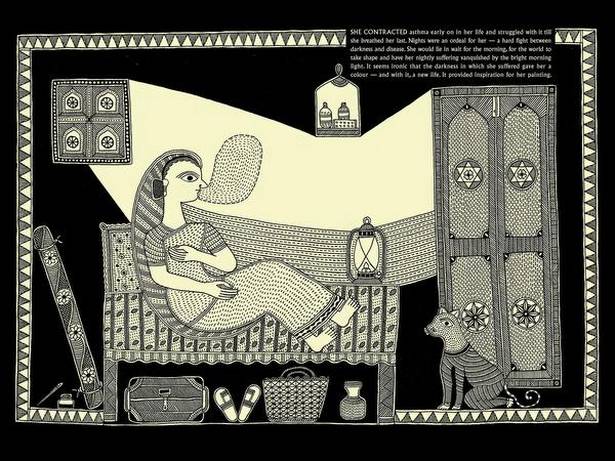 From ‘Black – An Artist’s Tribute’ by Santosh Kumar Das

Like soot crumbled into a pot of glue, there’s nostalgia mixed into Das’s sticky love for black. It’s the colour he remembers his mother working with and it’s the one that brings to mind pencil drawings from his childhood. In his book, Black – An Artist’s Tribute, he writes, “The rightful place for an artist, his real world, is a pot of black ink. I believe it contains all the magic, all the forms, everything that human beings can imagine and render. It hides inside itself the seeds of creation.”

Black doesn’t feel heavy in the hands of this artist. Like a nimble magician’s apprentice, it takes on any role with alacrity, disappearing and appearing at will. “My black” he tells us, “doesn’t remain black. It changes in degree according to the need of the work.” You might say the same of his whites. SK Das uses the blankness of the canvas as an entire colour in itself, flying in the face of the typical Madhubani instinct to fill up every inch of empty space with patterns. It’s an enormously confident way to order space. And rather than negate the conventions of the form, it affectionately reframes them. 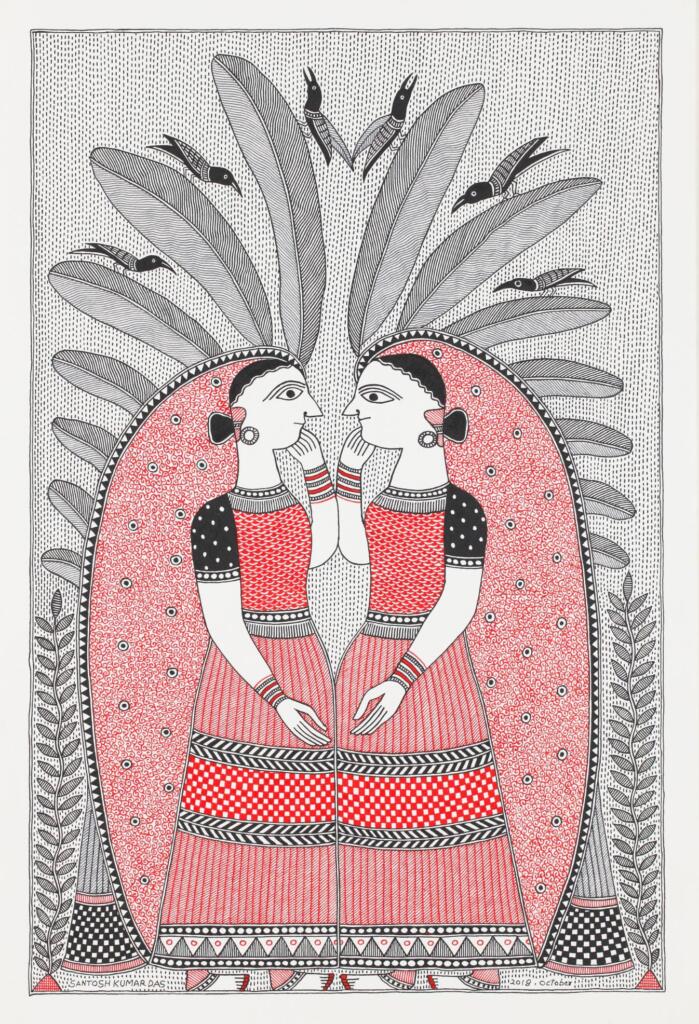 SK Das candidly states that at one point, Madhubani painting bored him. Before he went off to college in MSU, Baroda he felt he had got everything he could from it as an artist. He says, “From the ’90s onwards, with the migration of artists to cities a lot of changes took place in our society and art. In fact, I believe the process started in the ’70s with the arrival of foreign patronage and external influences. Initially, women [artists] put down on paper whatever their mothers taught them. It was very raw. As Madhubani painting travelled to different places and began to be appreciated by more people, it attracted more practitioners. What started with around 50 artists grew to thousands in the ‘90s so naturally the quality did deteriorate.”

When he returned to Ranti from college, Das was happy to plunge into a different milieu for a while. He worked with an American ethnomusicologist who was studying the music of Madhubani. This experience allowed him to be an observer in his own community and he began to notice the ways in which art and song were intertwined. “For every ritualistic drawing, there is a song. There is a festival called Devotthan in which you wake up the god, and he leaves the deity chamber. There’s a song sung at this occasion and a full-fledged drawing is made on the floor of the courtyard. As the women huddled together in song tackling high notes flawlessly, there was a beautiful feeling of communion. This was then reflected in what they drew.” 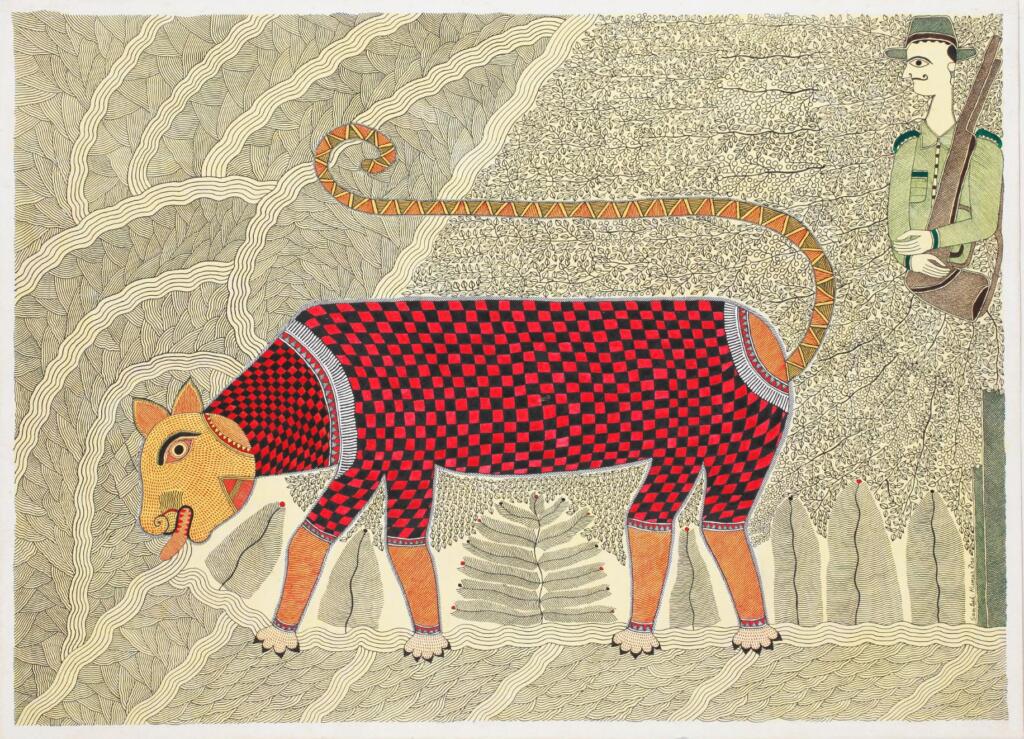 Just like his encounter with Ganga Devi, his tryst with music helped SK Das to reimagine Madhubani as a fuller, more holistic expression. Dipping into the collective storehouse of motifs, myths and memories, he started to create a signature style that was stark and forceful. Among the classical themes he has interpreted are the kohbar, which he recast as a tree rather than the traditional pond; scenes of wildlife, with one beast dominating the landscape rather than a teeming vista; and glimpses of everyday rural life with elements of the surreal tucked into the margins.

In 2017-’18, Das tackled one of the most popular underlying themes of Madhubani painting: romance. He did it with a series of embracing and dancing couples. This time he borrowed perspectives from two different disciplines altogether. “I was very much influenced by sculpture and classical music.” In classical music, he explains, the sound is very open in that each element is distinct and open to interpretation even as it comes together to make a soaring whole. In sculpture, the figure is totally open to your eyes, from every angle. 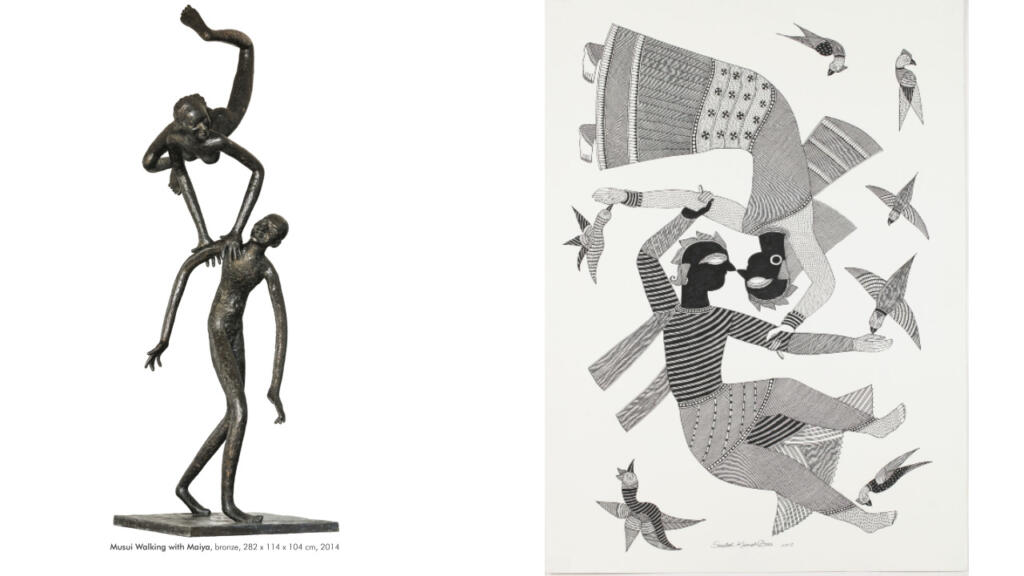 “One day I was at Ojas [Art Gallery, Delhi] and saw a wonderful sculpture by KS Radhakrishnan. I wondered if I could incorporate that openness in my art. The Madhubani concept is to have a central figure and then fill the rest of the space with flora and fauna. I wanted to change that by thinking of the white space as the third colour.”

Letting in the new

SK Das’s paintings on the Gujarat riots of 2002 and the Babri Masjid demolition of 1992 were a way of quite literally inviting the world in, jagged edges and all. When asked if his next work post-lockdown might once again deal with all the hot-button contemporary issues, he demurs saying current affairs don’t draw him in that way anymore. There’s a sameness to the bad news. 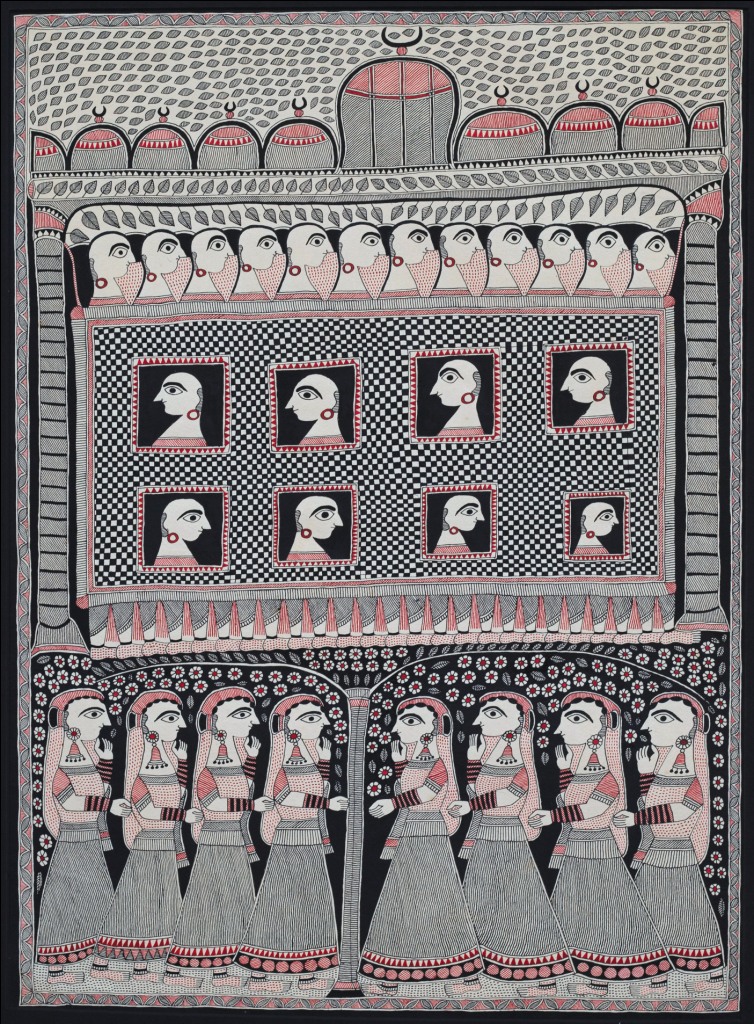 However, he says, working on those paintings was an education. “I learnt about politics and about the kind of people we are. We say one thing and do the other. You cannot use god, someone you hold at such a high value, for such petty goals. We [in Madhubani] value Ram so much, how can we use him for political goals?” Like many traditional artists from Mithila, Das has an almost familial relationship with subjects of Hindu scripture. His understanding of Ram, for instance, comes from years of hearing his mother chant from the Ramayana for hours every day. Lord Krishna is another favourite.

“In 2008, I went through a lot of changes on the physical and spiritual plane. As a result, I was freer as an artist. I had just quit my job as a teacher and was thinking what to do next. A god or goddess is a familiar template for a Mithila artist. No subject for your latest work? Just pick Ram, Sita or Krishna,” laughs SK Das when we ask about his prolific Krishna series. 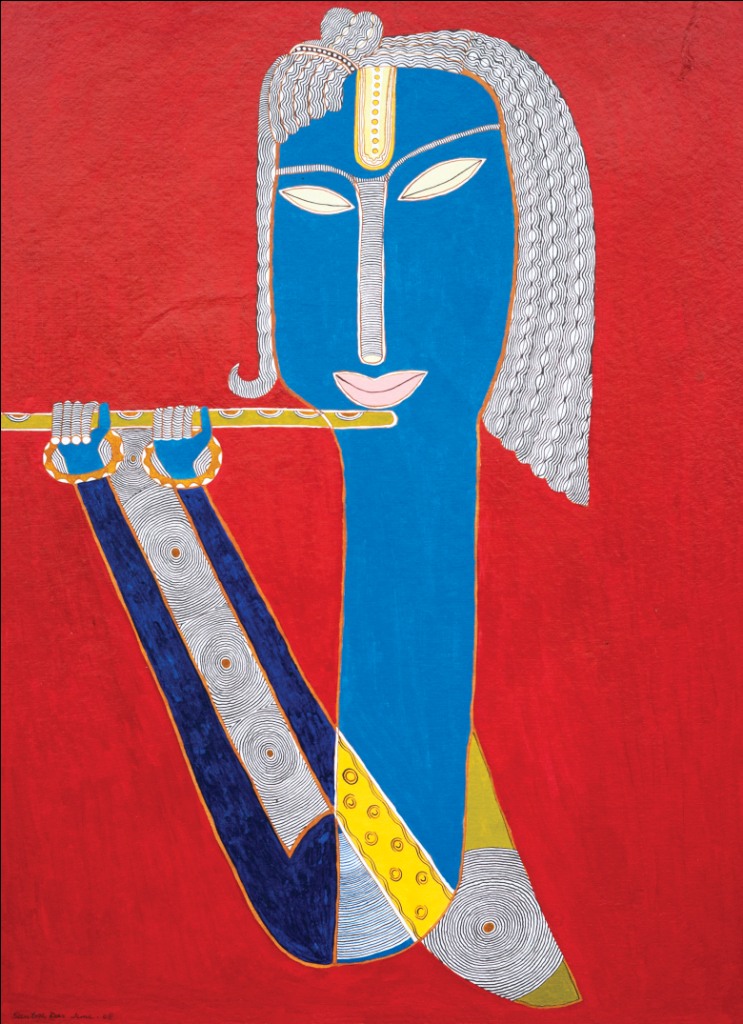 You would think that for an artist so fond of black, paintings of the dusky-skinned god would be a no-brainer. But Das surprises you again by unleashing a flood of bright colours in Vrindavan. One portrait of the lord has no black at all! This change too was inspired by events outside his studio. For five years, from 2003 to 2008, Das taught at the Mithila Art Institute. Teaching was a challenge but one he immersed himself in. “I wanted the next generation of artists to be very intelligent and very fluid. For a few years, I painted through them. I incorporated humour and dance into the class. To give them a sense of colour and line, I started to use colour.”

The 58-year-old artist-monk-seeker might be laying low at the moment as the pandemic continues to rage, but we know he will return to the canvas soon with something original to say in a language that belongs only to him. And a land called Mithila.