Tribal and folk art in India were created as physical dimensions of the stories passed down through generations. It is through the telling and retelling of these stories that we as a people safeguarded the wisdom of the past. These exuberant and enchanting artworks were not just conduits for stories but also served as repositories of myth, tradition, identity and allegory. In almost all forms of folk and tribal art that originated in the Indian subcontinent, one can detect the presence of ceremonial, ritualistic and sometimes even didactic elements. Which brings us to the utilitarian aspect of all folk art. The emphasis here is not on realism, perfection of form or perspective but of its role as a means to an end. And for this reason, and especially in India, art of this kind is almost always accompanied by performance.

Over the centuries, specific indigenous tribes and ethnic groups have evolved to shoulder the responsibility of keeping our rich storytelling traditions alive. In some cases, the artists themselves double as storytellers, and in others, a special community is engaged for the purpose. These travelling bards go from village to village telling their stories through a well-choreographed act. They draw from religion and mythology to deliver narratives rich in local motifs and colour. The result is a complete audio-visual treat designed to enthrall, engage and educate the audience. The artworks serve as portals to unknown worlds.

We’re turning the spotlight on three indigenous art forms housed in the Sarmaya collection that exist in conjunction with a rich repertoire of stories and performances. This is particularly important at a time when these art forms appear in highly fragmented incarnations threatening to disappear into oblivion. The images may fade and the words may go out of fashion, but these stories will live on.

Bengal pattachitra and the divine feminine

Click here for a translation of the story above

Bengal patua or Bengal pattachitra is believed to have originated in the 13th century. Patuas evolved as a community of performance artists hereditarily engaged in the creation and performance of the pattachitra. Traditionally the patuas traveled from village to village, narrating stories from the Ramayana, the Mahabharata, the Bhagavata Purana and the Bengali Mangalkavyas. The narrations were accompanied by vividly coloured scrolls or patas that illustrated scenes from these epic tales. In Sanskrit and Pali, the word patta means piece of cloth and refers to the canvas. Bengali pattachitra uses colours from natural sources like raw turmeric, marigold, aparajita flowers, burnt rice, soot from the hearth and fruits from the lotkon tree.

Durga is a recurring motif in Bengal pattachitra and is rendered in her myriad awe-inspiring forms. In one depiction, she may be a demon-slaying goddess but in another she is the compassionate mother who returns home every year for Durgotsava. Durga-pot is recognised as the worshiped pattachitra where Durga appears in the middle surrounded by Rama, Sita, Shiva, Nandi, Brahma, Vishnu and Shumbha-Nishumbha. Other gods and deities who make an appearance include Krishna, Chaitanya, Kali, Shiva, Manasa, Chandi, Behula and Lakshinder. In the Chandi Mangal by 16th century Bengali poet Mukundarama Chakravarti the village goddess Chandi takes on the form of Mahishasuramardini or the slayer of the buffalo demon before the startled hunter Kalketu and his wife. Today the subjects of the pattachitra have evolved to include current affairs and social issues.

Tholu bommalaata and good vs evil

An indigenous form of folk puppet theatre that originated 2,000 years ago under the Satavahana dynasty in the region that spans present-day Andhra Pradesh, Telangana and Karnataka, tholubommalaata literally means the dance of leather puppets. Fashioned out of translucent leather, the puppets function as colour photographic transparencies, when projected on a small screen. Antelope, spotted deer and goat skins have traditionally been used to craft the puppets and they typically range from 120 to 180 centimeters in height, occasionally going up to about two meters. Lighting is key and is managed using an arrangement of lamps that vary in size, intensity and distance from the screen.

As with many other performing arts in India, the show begins with a prayer to Lord Ganesha, the remover of all obstacles. Dialogues are interspersed with songs in Telugu and Sanskrit, accompanied by live music. Stories from the Ramayana and Mahabharata are favoured in tholu bommalaata. Sita’s kidnapping by the demon king, Ravana, Hanuman’s visit to Lanka, and the subsequent battle of victory is a popular vignette that’s commonly reenacted with all the fanfare. The faces are typically constructed in profile with the exception of the ten-headed Ravana whose central head is shown front facing. Rama and Krishna are depicted with blue skin, while female characters are shown having yellow and orange skin tones. Traditionally a typical Ramayana performance would go on for six nights and Mahabharata for 18 nights.

Phad and the god of small tribes 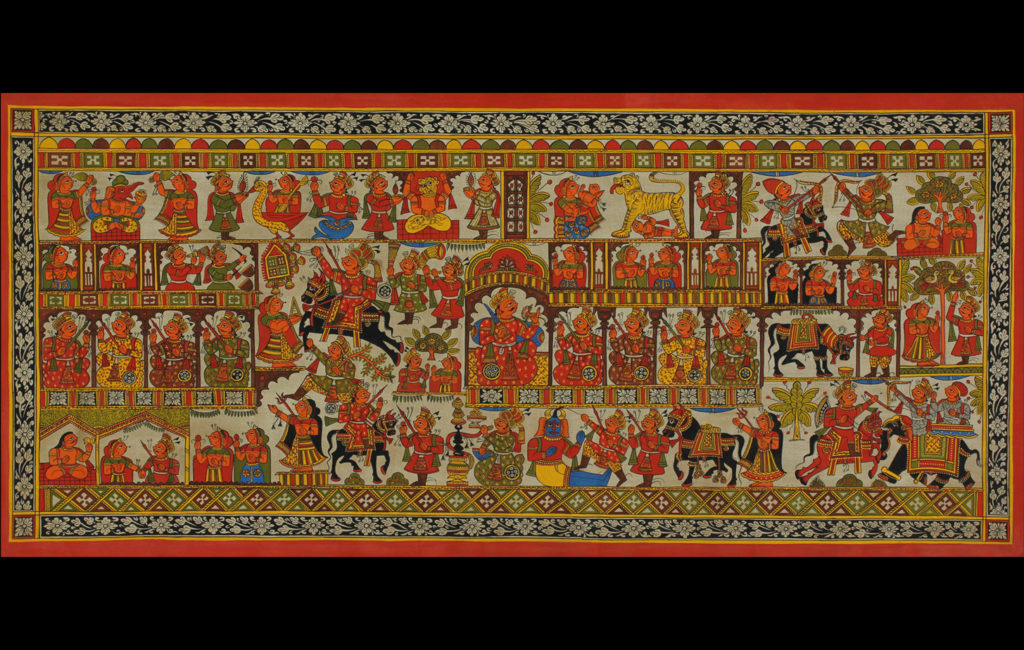 Phad paintings originated about 700 years ago and can be traced back to Rajasthan’s Bhilwara district. Phad refers to the large tapestry-style scrolls painted as mobile shrines to folk deities Devnarayan and Pabuji of the nomadic Rebari tribe. Traditionally phads were painted by artists known as Joshis and then carried from village to village by priest-singers called Bhopas and Bhopis. The phad painting would be unrolled after sunset and the performance would last all-night as part of a wake or jagran. The Bhopa plays a spike-fiddle called a ravanhattho while his wife moves with a lantern to light up the appropriate sequence on the scroll. Depending on the complexity, it can take anywhere between a few weeks to a few months to complete an artwork. It is customary for the first brush stroke to be drawn by a virgin girl from the artist’s family.

The Devnarayan phad is believed to have been first commissioned by Chochu Bhat, a devotee of Lord Devnarayan. The folk deity is worshipped as an incarnation of the Hindu god Vishnu. Pabuji, who is also worshipped as a folk-deity, lived in the 14th century in a remote village, near Jodhpur, Rajasthan. The phad represents him as an incarnation of Lakshmana, Lord Rama’s brother from the Ramayana. In one of his adventures, commonly recounted in the phad, Pabuji acquires a magical black mare named Kesar Kalami from a cattle breeder. This mare had been promised to his brother in law Jindrav, who is infuriated and in retaliation steals cattle from the breeder. Pabuji abandons his own wedding ceremony to rescue the cattle. In the battle that follows Pabuji spares Jindrav's life out of consideration for his sister but Jindrav returns with his allies and in this second battle Pabuji, his brother Buroji, and his followers are killed. Ultimately, years later, Pabuji’s nephew ie Buroji's son, avenges their death.