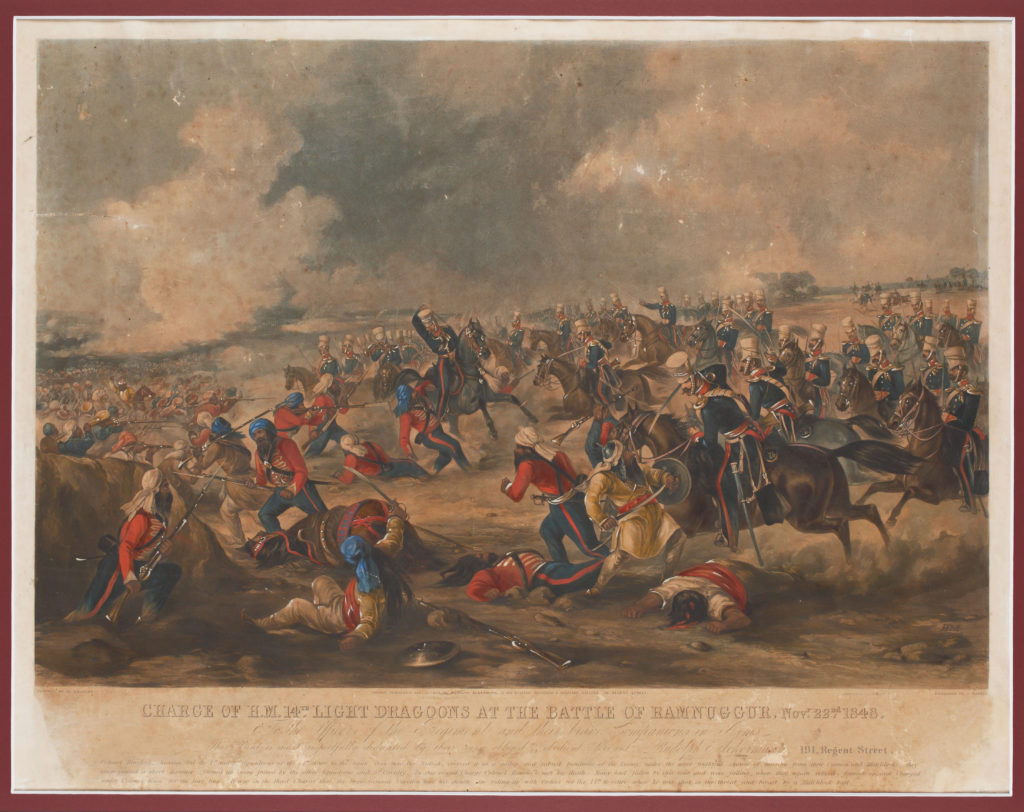 When I first saw the engraving Charge of H.M. 14thLight Dragoons at the Battle of Ramnuggur in the Sarmaya collection, I assumed that the Sikhs lost this battle. Having had no prior knowledge of the Anglo-Sikh wars, I simply went by the body language of the subjects here. Even a cursory look will leave you with an impression that the Sikh side was losing. The British soldiers advance powerfully on their chargers, their long swords raised menacingly. The Sikhs are largely on foot, mostly frozen in defensive postures and the bodies in the foreground seem to belong to their ranks. Imagine my surprise when later I read in George Bruce Malleson’s book, The Decisive Battles of India 1746- 1849, that the Anglo-Sikh wars were among the toughest the British ever fought. In fact, this specific scene was set during the Second Anglo-Sikh War, one that incurred great losses for the British, including the death of Colonel Havelock who led this charge.

That said, the narrative in the engraving is not incorrect nor does it twist facts. What it does is conveniently pause at a moment that shows the British covered in valour and their adversaries at a disadvantage. The scene above is titled, Charge of H.M. 14thLight Dragoons At the Battle of Ramnugger. In the initial stages of this charge, the Sikhs retreated; the story of the battle doesn’t end here, but the perspective of this artist does. It’s not unusual for the prevailing political dispensation to attempt to write history in its own favour and visual art has long been a tool for nationalistic propaganda. But I think it’s worth discovering the rest of this story if only to provide the right context to this masterful work of art. And to introduce you to the brilliant and brave Sher Singh Attariwalla.

The Battle of Ramnagar took place between the British and Sikh forces in November of 1848. However, the Second Anglo-Sikh War had started in Multan that April, when the Khalsa army resolved to revolt. It began when the Diwan of Multan, Mulraj Chopra, rebelled by resigning his post. Two British officers who came to take control from him were killed. Troops from Firozpur were sent under Colonel Henry Edwards to subdue the revolt while an autumn siege was being planned. But before autumn came, outbreaks in other regions began. The rising of Chattar Singh Attariwalla in Hazara and the operations of Maharani Jind Kaur, who was an informer for the Sikh army even as she was imprisoned by the British, distracted the imperial forces and they put Multan on hold. 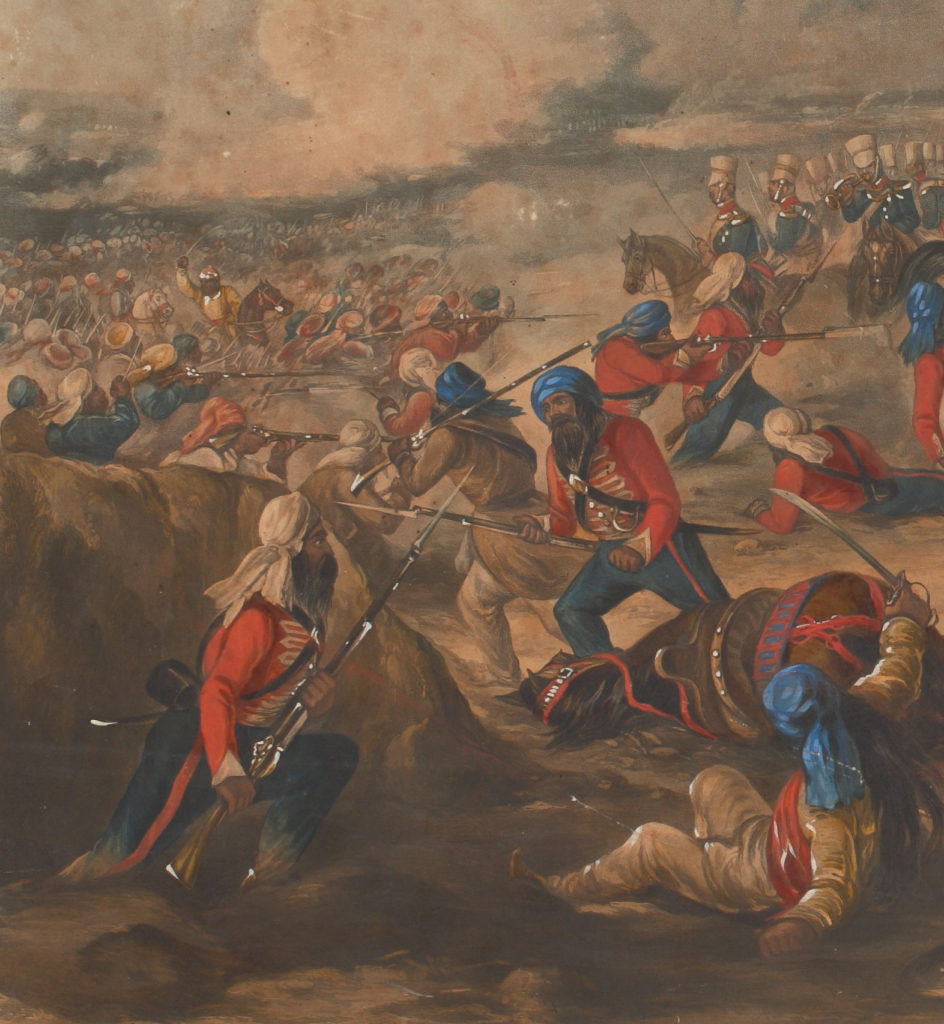 Sher Singh Attariwalla, son of Chattar Singh and a royal commander in the British military, was appointed to reinforce the troops in Multan. Sher Singh had 5,000 men under him and he marched to Multan with Jundial Singh, who was formerly a member of Chattar Singh’s army. On September 14th, Sher Singh too, declared open rebellion. The Multan force thus grew to 12,000 men, 54 guns and 14 mortars.

In November, Sher Singh moved his camp to Ramnagar. A position carefully chosen for its many advantages: he could establish communication easily with his father in Derajat; he could intercept the movements of the ruler of Kashmir, Gulab Singh and prevent an alliance that would strengthen the British position; and he could draw his supplies from the districts north of the River Chenab. According to Malleson, “Such a position was worth fighting for. Indeed, Sher Singh would have been justified in seeking an opportunity to bring the British to action to maintain it.” Sher Singh camped on a plain near the river. The Chenab was narrow but had a wide bed of soft sand, which could not support cavalry and artillery.

Commander-in-Chief of the British forces Lord Gough decided to march to Ramnagar, 10 miles from the British camp near Multan. The force consisted of cavalry and artillery supported by an infantry brigade and two batteries of artillery; only a quarter of this troop consisted of European officers. On 22ndNovember, the British charged and the Sikh detachment on the left bank fell back. They then re-joined Sher Singh on the right bank. Seeing the enemy retire without striking a blow, Lord Gough advanced, misjudging the situation. He also failed to consider the fact that the squadron he had advanced with was much smaller than the Sikh army. 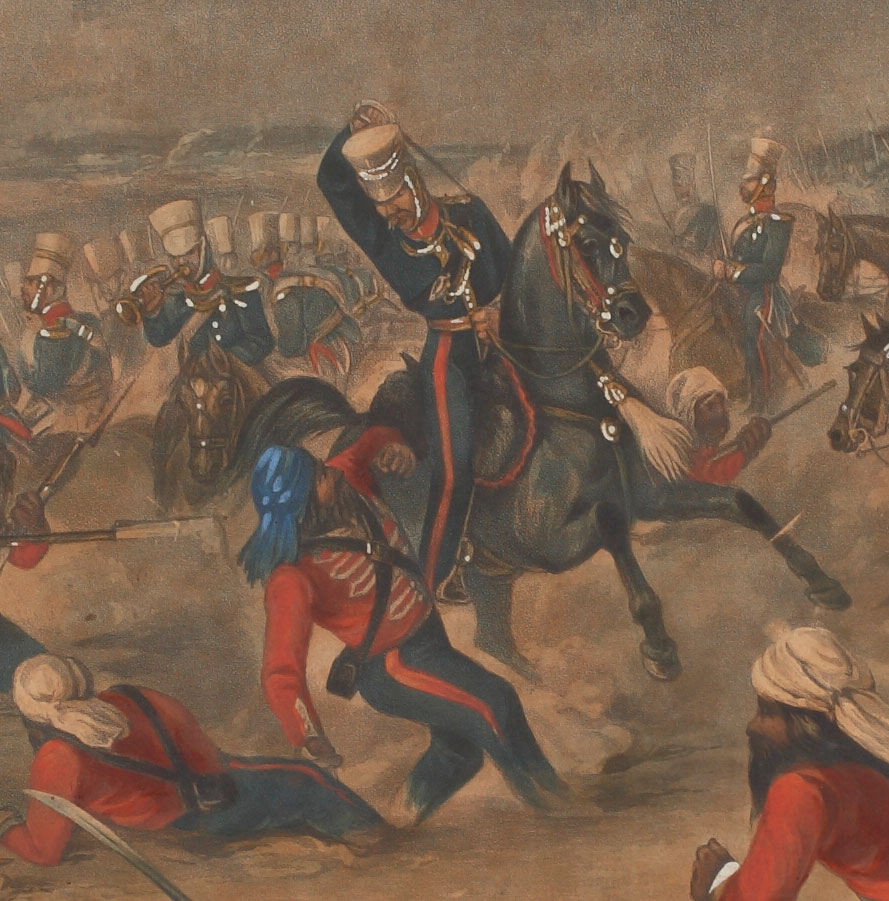 As the British pressed on behind the Sikhs, they came to land that exposed them to enemy view. The right side of the bank was higher too, giving the Sikhs better range. The Sikhs began firing with force. The British attempted to return fire but could not manage this fast enough as some of their artillery got stuck in the sand.

Captain Ouvry followed with a squadron of the 3rdLight Dragoons (cavalry) and other British charges but they all came under heavy fire from the Sikhs and were unsuccessful. By this time, the Sikhs had moved further towards the British artillery stuck in the sand. The next attack was then made by Captain Havelock of the 14th Light Dragoons (depicted in the engraving) aimed at the recovery of the gun. As mentioned above, the Sikhs fell back a few yards, possibly to get the Dragoon within better range of their own artillery. As the 14thpressed on, it too came under heavy charge from the Sikhs. The Sikh infantry then returned and charged under the continuing fire. Havelock was slain in this fight. Colonel Cureton too was killed as he withdrew from the charge. The squadron fell back, the Sikhs prevailed and carried off with them the spoils of the war, ie the gun embedded in the sand. 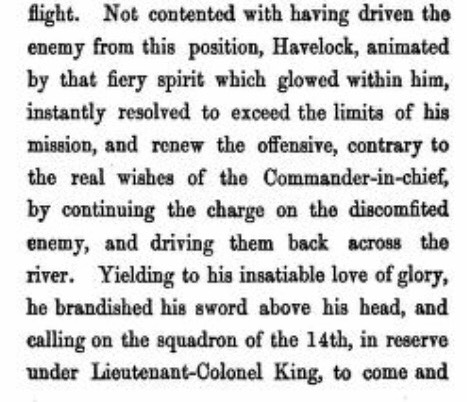 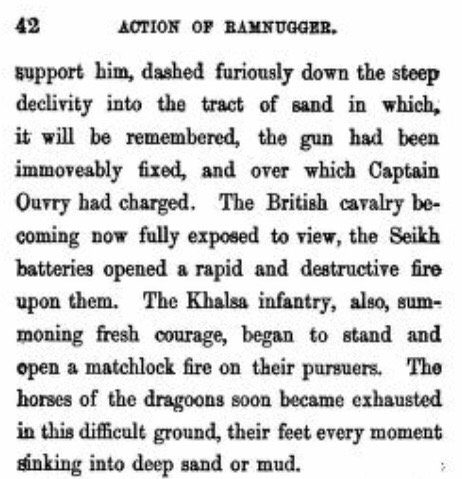 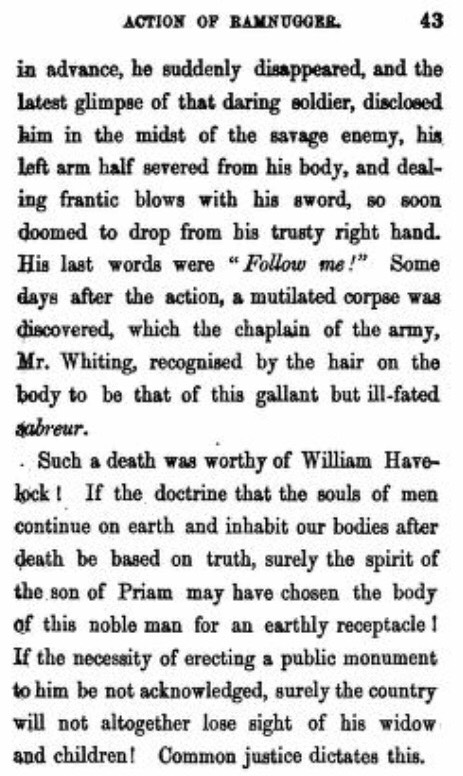 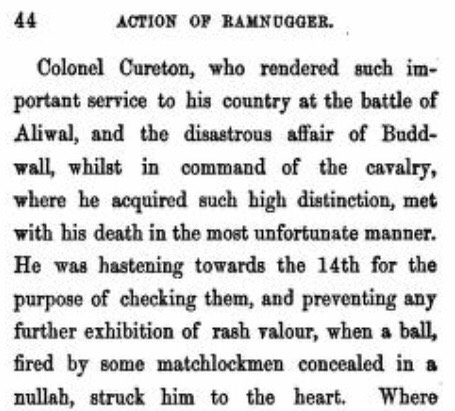 From Edward Joseph Thackwell’s book, The Narrative of the Second Sikh War in 1848-1849

Interestingly, the two accounts above have very different viewpoints of this event. In Thackwell’s narrative Havelock was an exceptional soldier who did whatever he could to secure the embedded artillery. He also describes how Havelock’s body was mutilated and had to be identified by the colour of the hair. In Malleson’s narrative, Havelock was burning with indignation and disregarded strategy, which might have warned him against following a course that two squadrons before him had failed at. And he describes Cureton being shot in the heart.

As a result of this combat, eighty-two men were killed, wounded or went missing from the British army. The Sikhs had now crossed the right bank of the Chenab and were in a stronger position, although on less favourable terrain. Lord Gough prepared then to cross the river of Chenab, even though the wiser option would have been to keep Sher Singh in check while the siege of Multan was carried out. As the direct attacks from the left bank before had failed, the British decided to cross a nearby ford between Ramnagar and Vazirabad and attack the Sikhs from behind, surprising them.

There were three fords that could be used to realise the strategy: Ghari, Ali Sher and Vazirabad. On 23rdNovember, E Joseph Thackwell and Colin Campbell, together with 8,000 men, marched towards the ford at Ghari towards Ranikan. They started at 1am with the aim to cross the ford by 8am. The ford had never been navigated before by the British men and the infantry soon became unsure of their way. They had difficulty following the right path, especially in the darkness and reached Ranikan two hours later than planned. When they reached they saw a broad riverbed, broader than the one at Ramnagar, the banks of which had many sandbanks and quicksand too. The opposite bank was out of range and guarded by the enemy as well. It became abundantly clear that this expedition was useless. 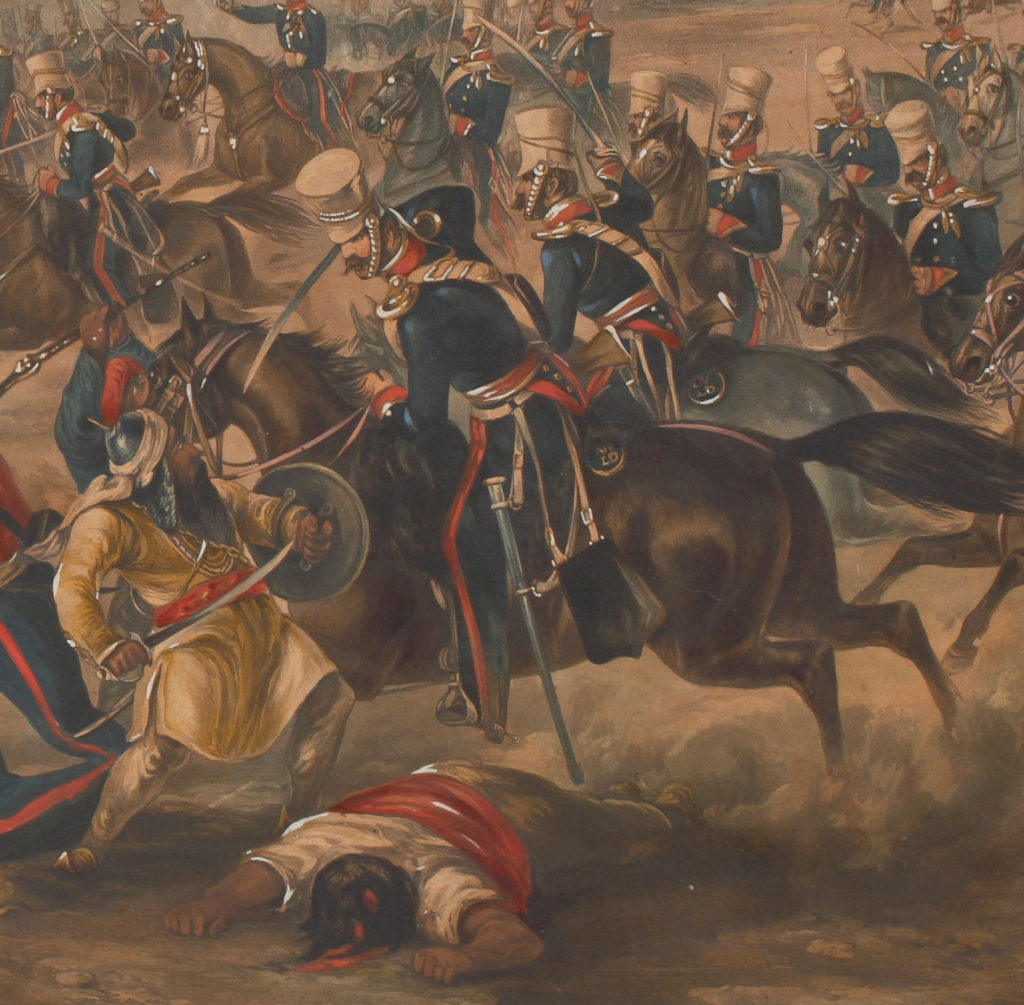 Thackwell then decided to cross the ford at Vazirabad. With great difficulty there as well, his men crossed that ford in the cold night of Punjab without food or fire. The next day, by the time Thackwell’s men recovered from the journey and organised food, it was already noon. He then received a message to wait for assistance from General Godby’s brigade. He directed his men to encamp on the grassy land near the village, Sadulapur, which lay facing three other village walls. To distract the Sikh army, Gough back at Ramnagar opened fire on 1stDecember.

When Sher Singh became aware of Thackwell’s movements, he came up with a plan of action that showed his mettle as a great commander. He marched to Thackwell at once, before Gough could receive his message requesting aid. Sher Singh broke up his camp and drew back a force of 10,000 men towards his side. The rest engaged with fire from Gough. Sher Singh then caught up to Thackwell, just as he had taken camp position near Sadulapur on 3rd December. He took up positions in all three villages facing Sadulapur and started firing shots. “It was Sher Singh, who had surprised the British”.

The British immediately retreated and the advanced guard deployed fell back too. The Sikhs beat down heavy fire on the British till sunset, leading to the loss of 76 men. Sher Singh fell back on his position in Ramnagar without a single loss to guard against Lord Gough, who came under heavy criticism for his command and strategies. 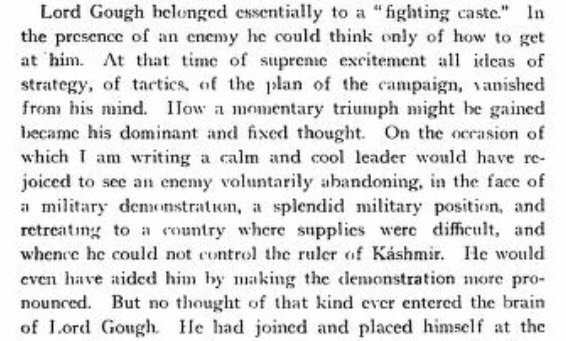 According to Malleson, “It was universally felt that up to that point the campaign had been a failure.” Thackwell felt the Chenab passage was an ill-advised exercise. The battle of Ramnagar was thus, an unambiguous victory for the Sikhs, who suffered almost no losses on account of the British. 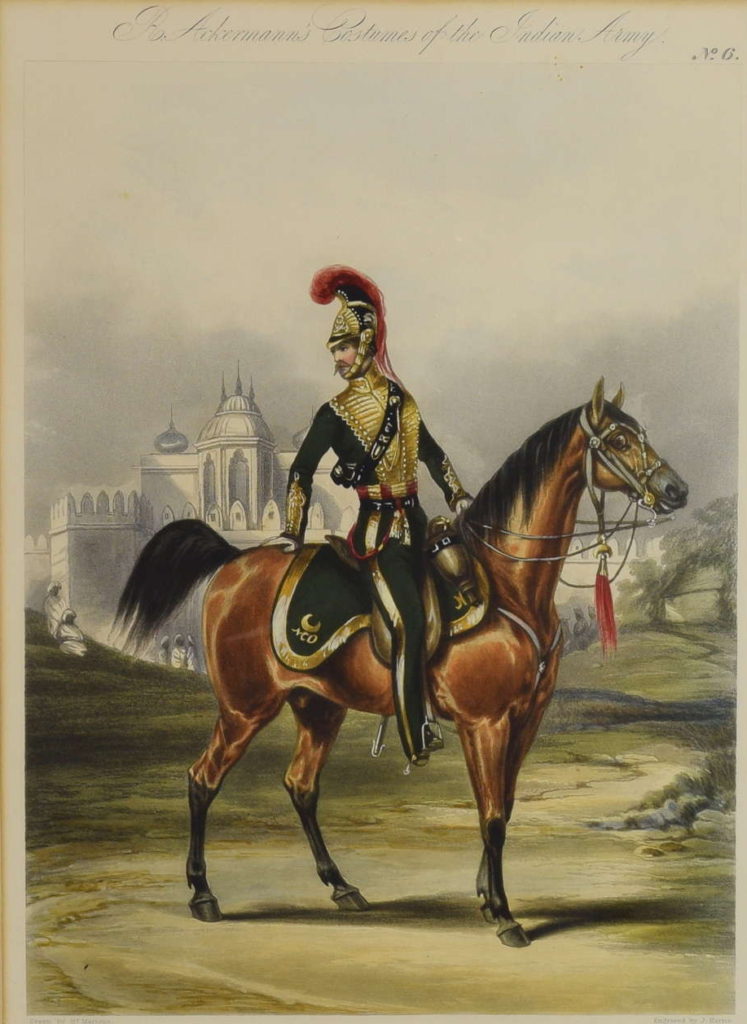 With the historical context straightened out, we can now appreciate the artistry of this engraving. It was based on an original watercolour by Henry Martens, a very prolific British artist who specialised in military art. He worked for the publisher Rudolph Ackermann who produced among other titles The Costumes of the Indian Army with the artist. The original artwork by Martens was traced by John Harris who was known for creating uncannily accurate facsimiles of art for the British Museum. The work you see above is an engraving by Harris based on an artwork by Martens, who himself drew inspiration for these battlefield paintings from first-hand accounts given by officers in the British army. Despite the number of hands involved in the shaping of this image, the silent message it sends about the might of the British army is unambiguous. That is, until we zoom out a little and see history through a wider lens.