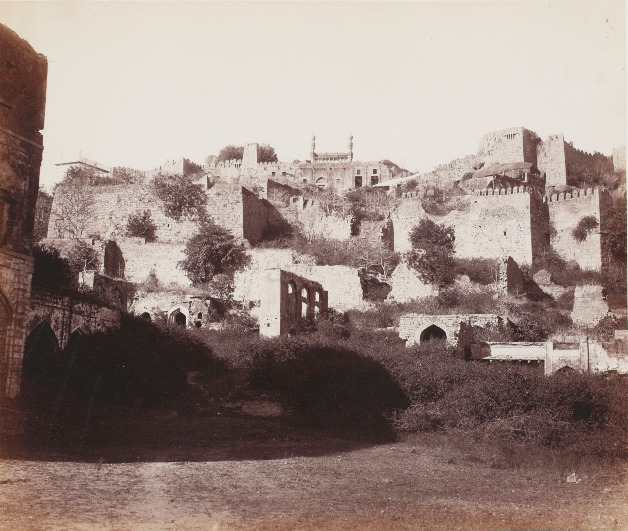 When it comes to diamonds, they say, nothing surpasses Golconda.

Before the current problematic era of Blood diamonds, Golconda’s rocks shone the brightest. The only known source of the stone till the early 18th century, the mines of Golconda produced diamonds unparalleled in their ability to spawn legends and bewitch the beholder. These mines put the gem on the world map and marked India as the original home of the adamas, the Greek root word for this indestructible jewel. For this reason, Golconda’s ancient mines, pre-dating dynasties of the last two millennia, were a source of wealth and influence for the powers that controlled them through the ages.

From the dark depths of Golconda came the most famous rocks on earth: the Dresden Green (Germany), the colourless Orlov (Russia), the Blue Hope (United States) not to mention the contentious Koh-i-Noor (United Kingdom), which once graced Mughal Emperor Shah Jahan’s magnificent peacock throne, and its sister, the stunning pink Dariya-i-Noor (Iran). As these diamonds passed from hand to hand, stopping along the way with various Telugu dynastic rulers, Turko-Mongol sultanates and foreign imperial colonists, the fortunes of the empires too rose and fell. 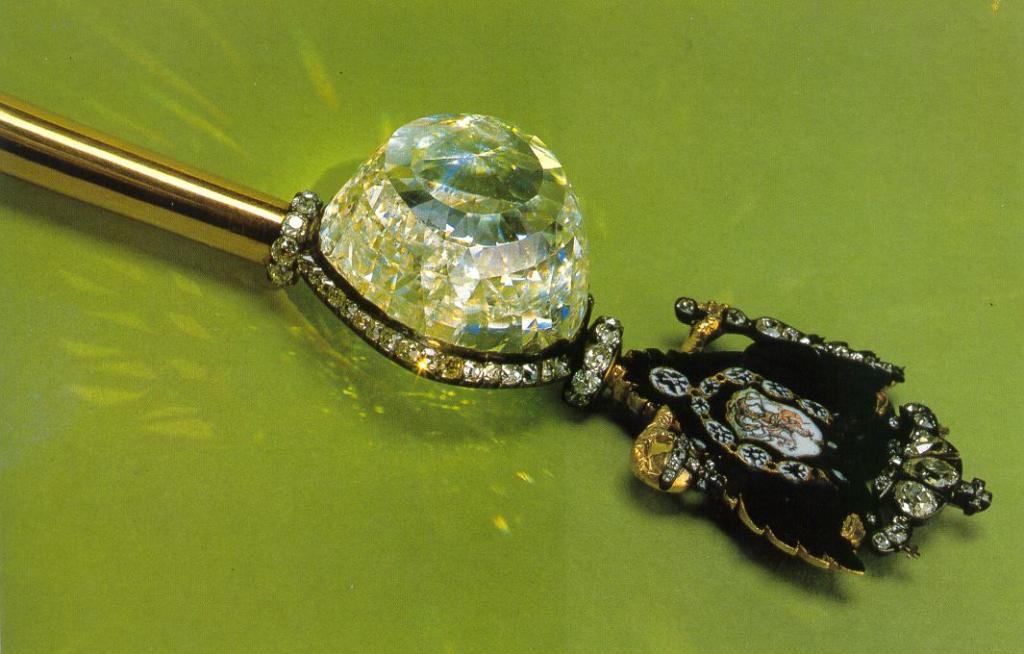 The Orlov Diamond is part of the collection of the Kremlin Armoury museum in Moscow, Wikipedia Creative Commons

As historians Anita Anand and William Dalrymple write in their book, Koh-i-Noor: The History of the World’s Most Infamous Diamond, throughout the 1650s, the Mughals increasingly focused on seizing the different kingdoms of the Deccan—at least in part so that they could possess the territory that produced the gemstones they were so obsessed with. They further quote the words from the Shah Jahan Nama, the official history of the reign, ‘This territory contained mines teeming with diamonds.’ What makes the Golconda diamonds exceptional is their startling purity in composition. Unlike other diamonds, these are devoid of nitrogen – considered an impurity – and it is this quality that allow ultraviolet rays and light to pass through them, displaying a stunning transparency akin to ice cubes. They form only 2% of all diamonds found on earth.

The Golconda fort was built by the Kakatiyas in 1143 and later fortified by succeeding powers. But it only rose to prominence after it was ceded to the Bahmani Sultanate in 1364 by Musunuri Kapaya Nayaka. It became a centre of power under the rule of the Bahmanis and then the Qutb Shahi dynasties, between the 14th and 17th centuries. 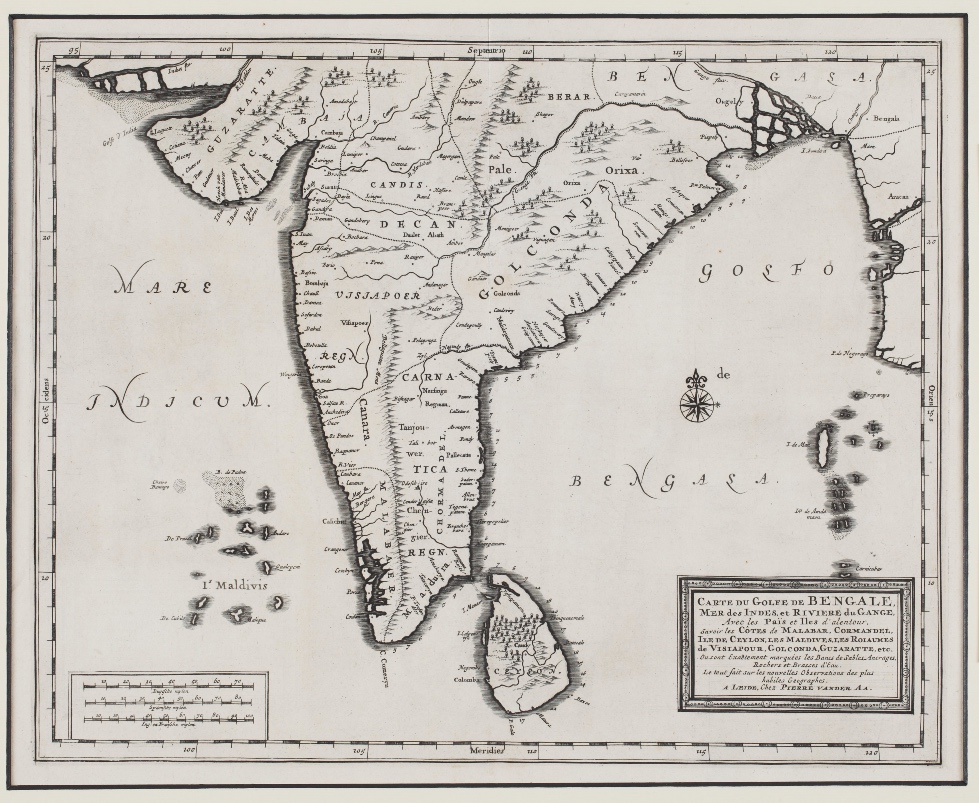 In reality, what were known as Golconda diamonds actually came from the Kollur mines in Krishna river valley on the stretch between Guntur and Vijayawada, in present-day Andhra Pradesh. Golconda, being the capital of various ruling powers like the Qutb Shahis, served as the marketplace for the diamond trade. According to Sajjad Shahid, a historian and visiting professor at the University of Hyderabad, all diamonds from mines in the region were brought to Heera Mandi in the Golconda citadel and once they passed through the gates of the fortress, they were thereafter branded and marketed as ‘Golconda diamonds’. 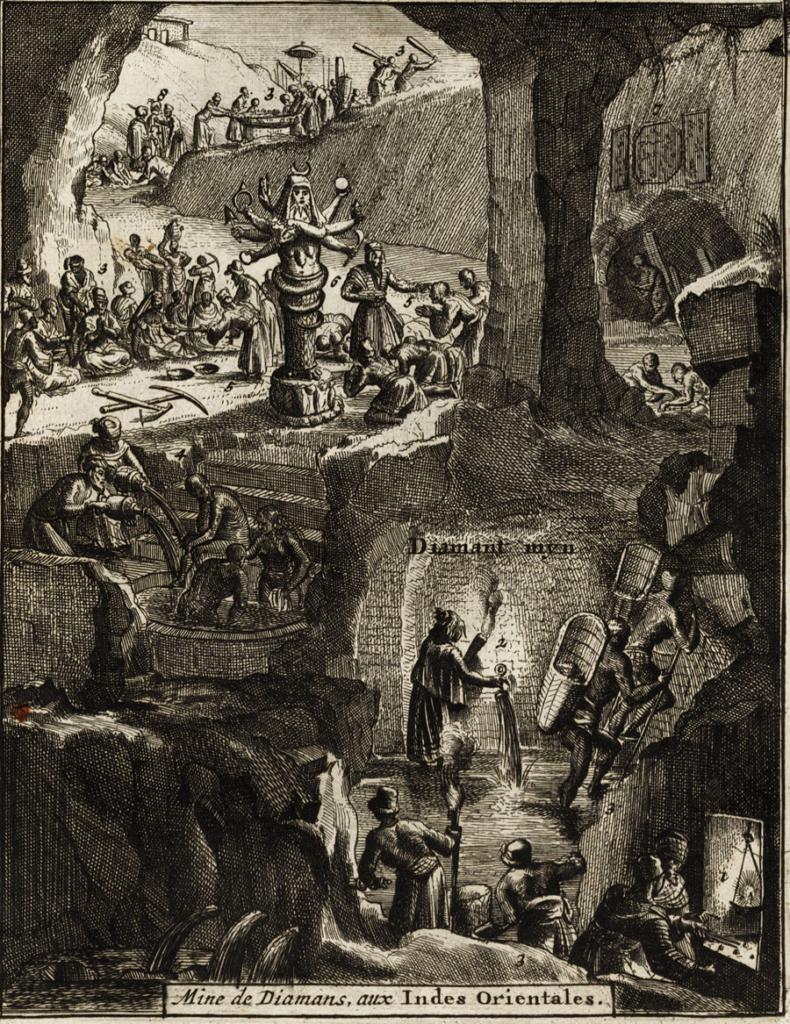 Golconda was also where the diamonds were processed. French gem merchant and traveller Jean Baptiste Tavernier, who visited the city in the 1660s noted that shallow pits were sunk inside walled enclosures. Into these pits, diamond-studded gravel was poured and crushed. Water was poured over the crushed rock, after which it was sifted in baskets and sorted by hand. Shahid shares with us an interesting piece of oral history here. “Nabaalik (minor) kids, who would be playing around outside in the dirt and mud, would be called to sort out the diamonds. And their word on the valuation and gradation of the diamonds was considered final and superior.”

Commerce aside, these diamonds held significant political clout and were often used as important diplomatic symbols in political negotiations between the subordinate Qutb Shahis and their Mughal overlords. Manu Pillai, historian and author of Rebel Sultans: The Deccan from Khilji to Shivaji, among other books, says, “When Mir Jumla, the 17th-century minister of Golconda, defected to Shah Jahan’s court, he took with him a particularly famous diamond (some say this was how the Koh-i-Noor came into Mughal hands). In the final Qutb Shah’s reign, by which time Golconda had officially become a vassal state of the Mughals, his holding on to two large diamonds was seen as an offence against the emperor. That is to say, the Qutb Shah ought to have sent these up to his overlord, while keeping it could be interpreted as a mark of defiance.”

Marco Polo, the Italian adventurer who visited India between 1292 and 1294 CE, documented this very system when he wrote in his travelogue Il Milione translated in English as The Travels of Marco Polo, “Those [stones] that are brought to our part of the world (Europe) are only the refuse, as it were, of the finer and larger stones. For the flower of the diamonds and other large gems, as well as the largest pearls, are all carried to the Great Kaan (King/Khan) and other Kings and Princes of those regions; in truth they possess all the great treasures of the world.” 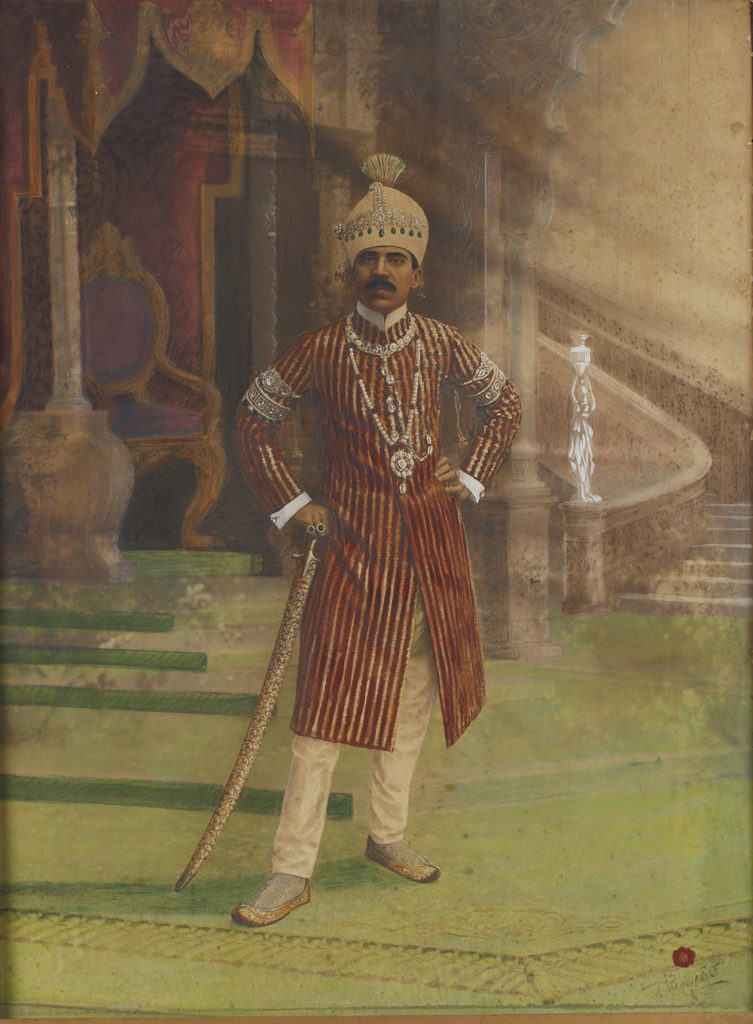 Shahid and Pillai both explain that the diamond mining activities were never an occupation of the regional kings, who might dismiss them as “useless bits of stone” but of wealthy contractors who were merchants, Brahmins, noblemen, subordinate rajahs, etc. As Pillai explains, “In essence, it took people who could not only invest large sums of money but also mobilise the enormous manpower needed. The Qutb Shahi kings tended to farm out most mines to contractors: the contractors would pay a fixed annual fee and keep all the diamonds for themselves, except those above a certain size or value which automatically went to the Sultan.”

The mines were also essential to local economies. Pillai says reports from foreign observers of the mines suggest they employed tens of thousands of people, from children to old men. “These markets not only delivered economic benefits to people in the region but also elsewhere, including in neighbouring states like Vijayanagara.” 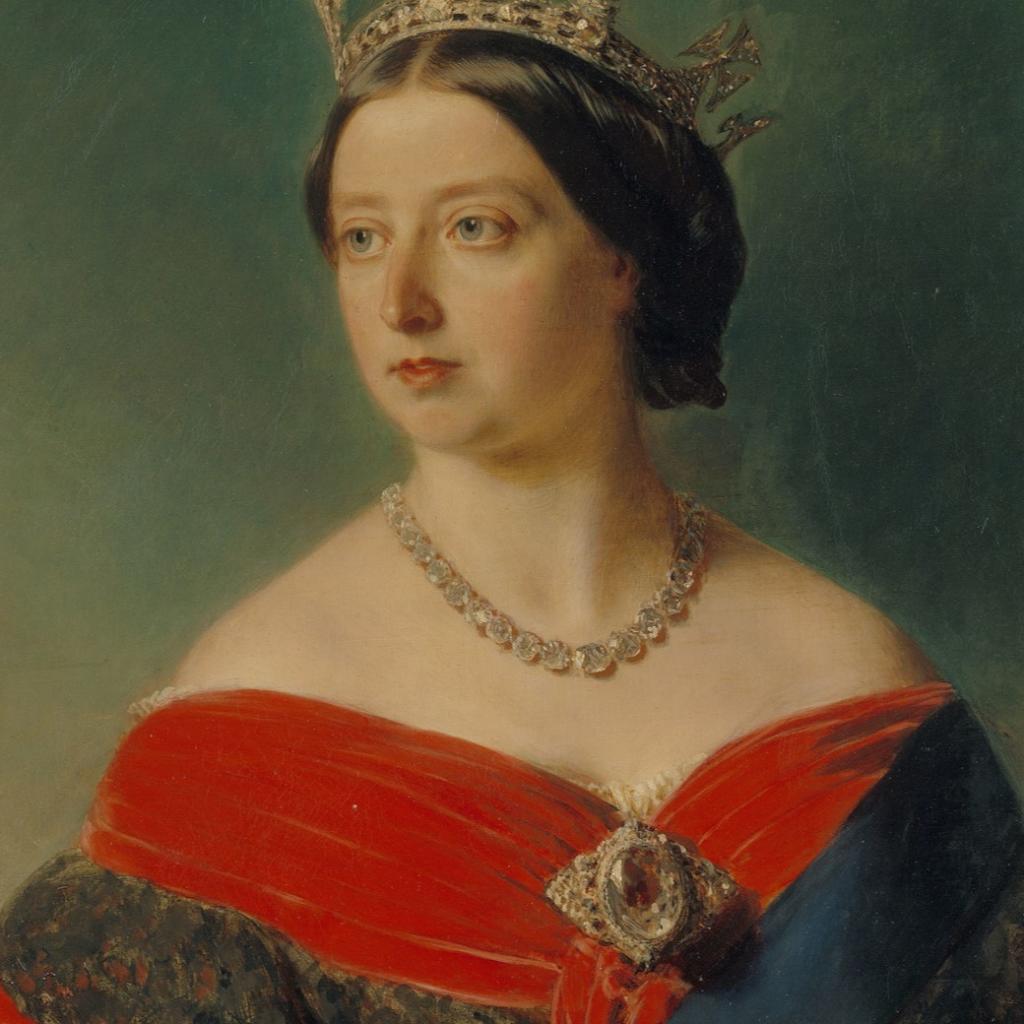 Meanwhile, it was the Koh-i-noor, known to be the least remarkable of the stones in the Mughal treasure chest that left a bloody, transcontinental trail in its wake. Beginning with Nadir Shah’s catastrophic invasion of Delhi in 1739, it began its murderous journey through Iran and Afghanistan, then returning to Lahore with Sikh ruler Maharaja Ranjit Singh in 1813. It eventually ended up on Queen Victoria’s crown as part of the loot of the East India Company by the mid-1800s.

The stone sat under the cloud of a curse in the London Tower after word got around that it caused the premature death of the Queen’s husband, the Prince Albert. He died shortly after commissioning to have the jagged glass-like stone recut and polished, reducing its size by half to make light refract better. The curse of the stone took on the status of legend and fired the imagination of the British press, culminating in the belief that the jewel could only be safely worn by women.

Omens and portents notwithstanding, the Koh-i-noor eventually came to evoke something more than just kingly—or queenly—grandeur. It stood in for the pride of a whole nation. As Dalyrmple and Anand observe, it became a symbol of Victorian Britain’s imperial domination of the world.

While the Golconda mines are now shut, Shahid describes what can only be called an annual gemstone harvest season in the erstwhile diamond country. A mad scurry for rocks is revived in and around the Krishna river valley every monsoon. As the earth loosens up, people gather to sift out shiny stones from the dirt. Every year, mud-caked hands hope to unearth the answer to that teasing question once posed by John Keats:

Hast thou from the caves of Golconda, a gem

Pure as the ice-drop that froze on the mountain?