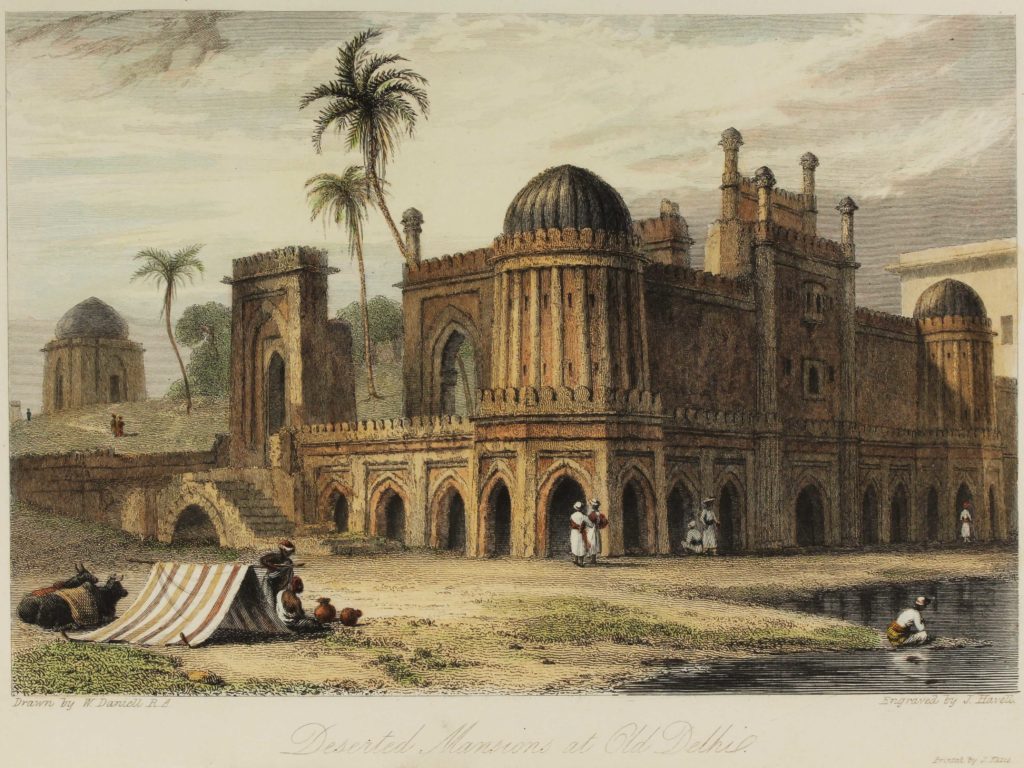 Who decides which landmarks deserve the spotlight and which ones languish in obscurity—and how? Some inscrutable combination of aesthetics, scale and let’s admit it, celebrity factor usually dictates if a monument makes it to the tourist circuit or not. But a tour of the most popular sights will leave you with only a small piece of the sprawling, layered, ancient puzzle that is Delhi. For every Red Fort or Jama Masjid, there is a Begum Samru’s Haveli or a Kalan Masjid whose story is begging to be told. And for every piece of history still standing, there are many that crumbled to dust taking with them an entire epoch that defined the city. We excavate some of these hidden gems and forgotten legends from the Sarmaya collection. 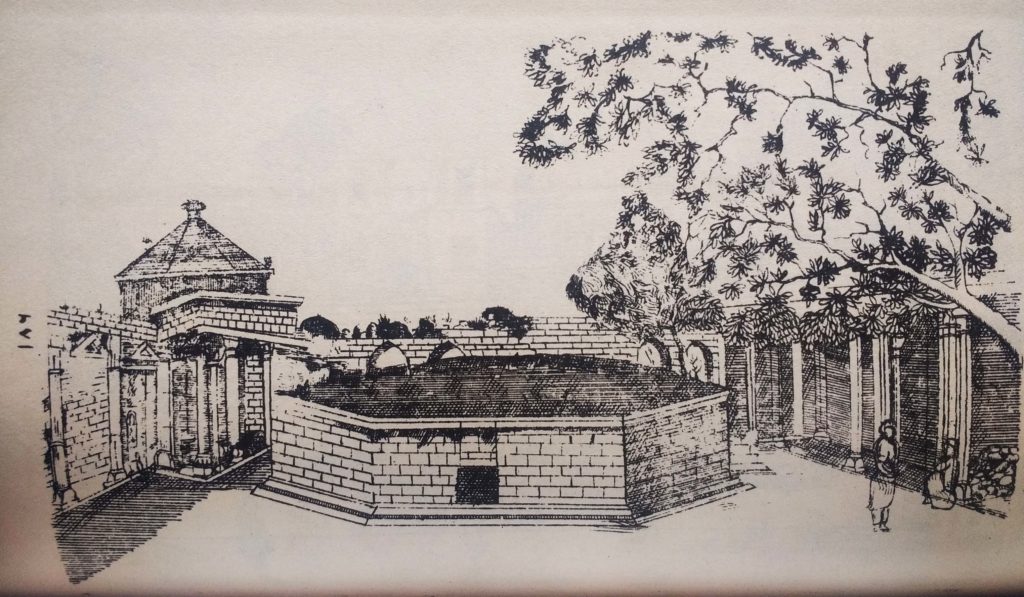 The oldest known Muslim tomb in India looks nothing like the extravagant ones that would follow a few centuries later, when Mughal emperors elevated mourning to a fine art (see: the Taj Mahal). During the era of the Slave Dynasty, tombs were rather more elemental affairs but there’s a poetry here too if you know how to look. Sultan Garhi is the tomb of the oldest son of the third sultan of Delhi, Iltutmish. The Slave Dynasty hailed from Central Asia and their early architectural ventures in Delhi betray a certain homesickness for the landscapes of home rife with towering arches. But the mostly Hindu workers in their new kingdom didn’t know how to build these gracious self-supporting structures. The result was the emergence of a new architectural style, unique to India, where tombs had sham arches (notice how the arches are carved into a regular brick wall in the background of this image) and pillars. You can see both in the tomb for Prince Nasiru’d-Din Mahmud, which lies in an underground cave (garhi in Hindi) and is covered by an octagonal stone slab. 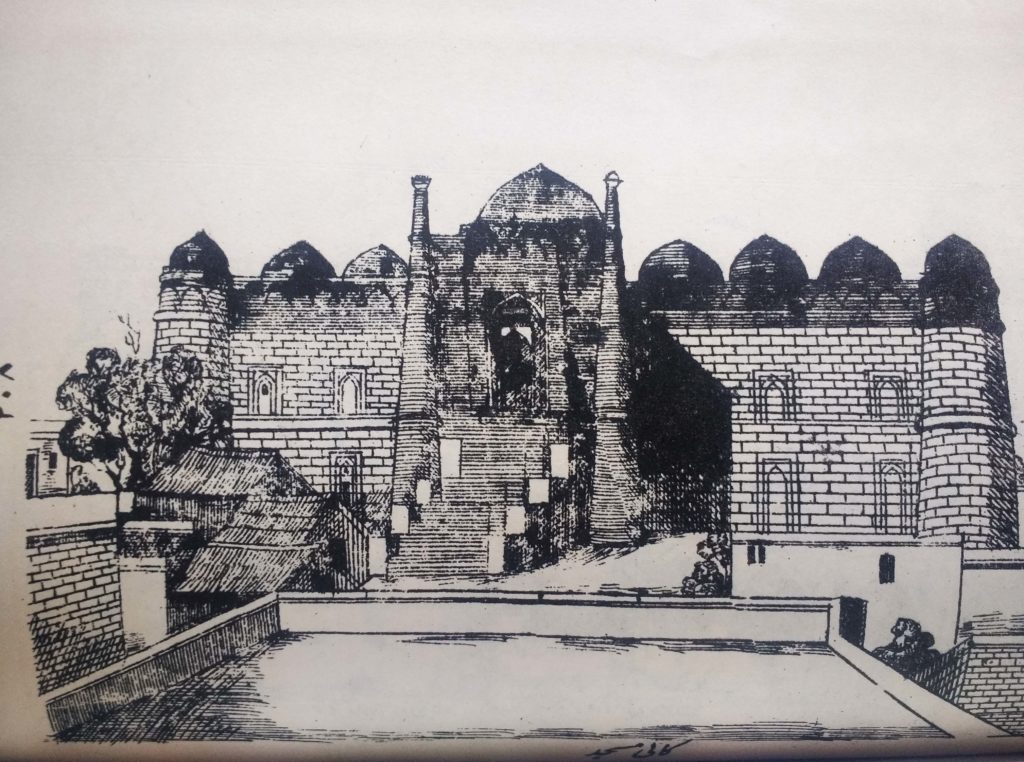 Back in the day of Feroz Shah Tughlaq, the post of prime minister or vazir could be passed from father to son and that’s exactly what Khan-i-Jahan Maqbul Tilangani did. But the junior Khan-i-Jahan was more keen on architecture than nation-building and ultimately, that’s what secured his legacy. Junan Shah is credited with designing seven mosques in Delhi that bear his trademark style whose characteristics include: sloping walls reminiscent of the pyramids of Egypt, domes but no minarets, perfect proportions and very little ornamentation. Kalan Masjid (there are two by this name, one at Turkman Gate and the other in Nizamuddin—the word ‘kalan’ meaning big is now corrupted to kaala, Hindi for black) and Khirki Masjid are both attributed to Junan Shah. The latter gets its name from the lattice-worked windows along its walls and is situated in the centre of Khirki Village in south Delhi. 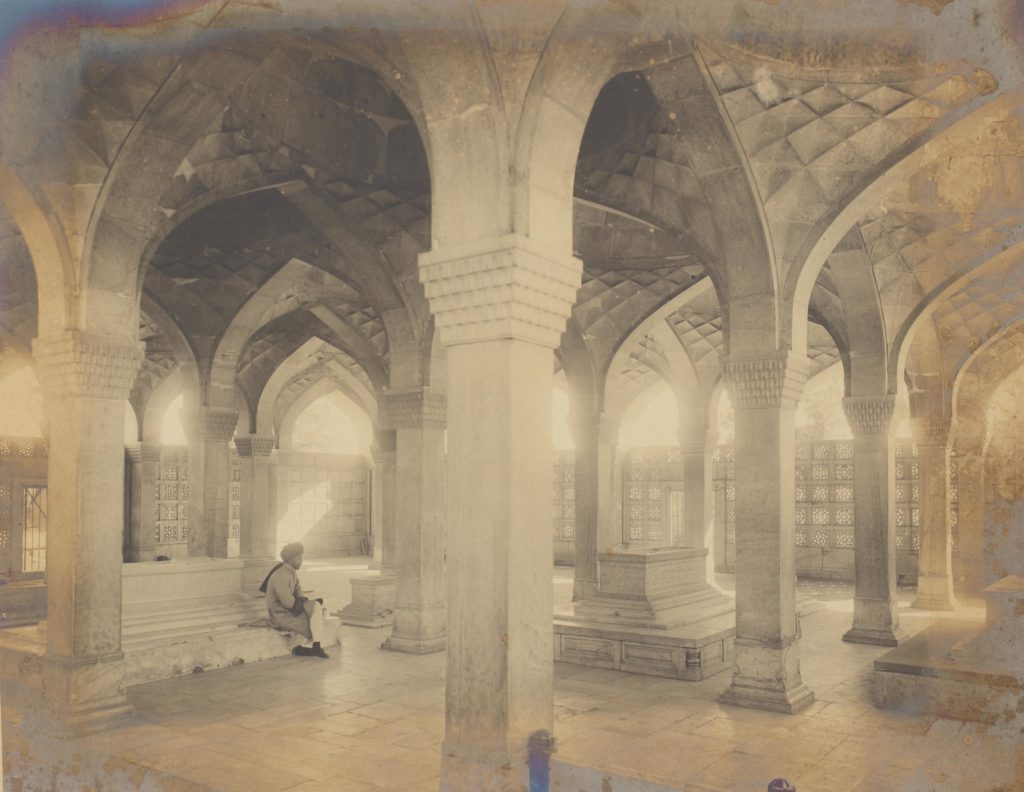 Mirza Aziz Koka aka Kotaltash was Akbar’s foster-brother—or more accurately, his milk brother, so-called because he was the son of the Emperor’s wet nurse, Jiji Anga. Kotaltash’s father was Ataga Khan, Akbar’s prime minister, upon whose death a grand mausoleum was constructed in near the dargah of the Sufi, Nizamuddin. It was perhaps as a hall for visitors to Ataga Khan’s tomb that the Chausath Khamba was originally envisioned. Boasting 64 pillars (hence the name) and intricate lattice work, all hewn out of white marble, this ethereal sample of Mughal architecture would later come to house the tomb of Kotaltash himself. It was never meant to be a mausoleum, which explains the unusual layout. After four years of intensive restoration work during which this heritage structure remained shut, Chausath Khamba was opened to the public again in 2014. 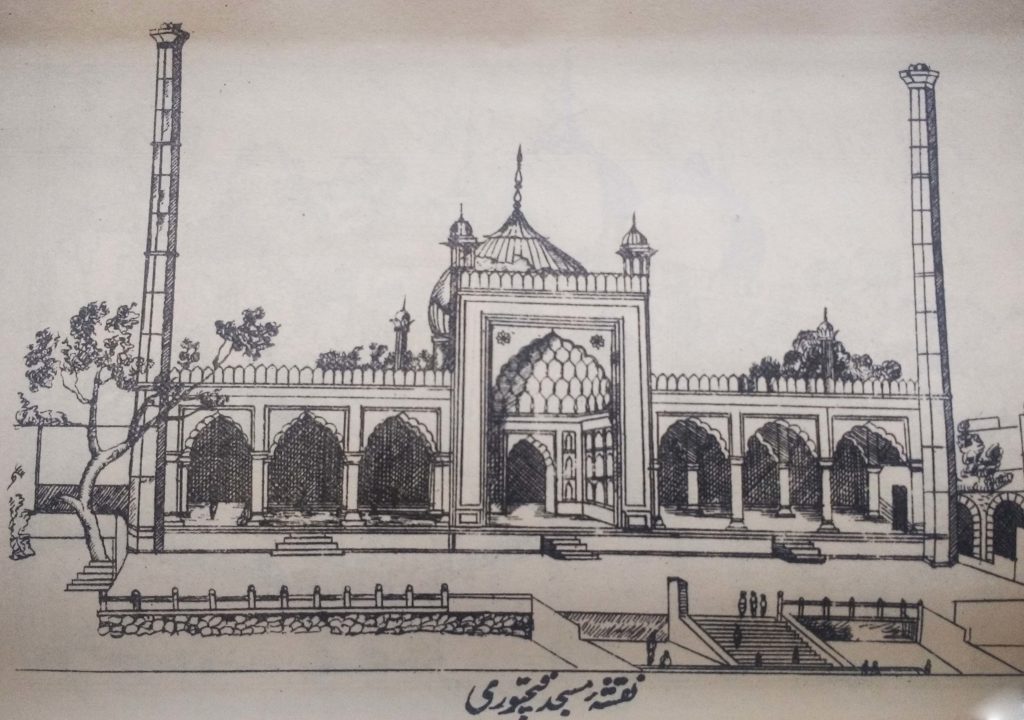 After the Siege of Delhi, the British took control of the city and drove out many civilians. Several prime properties, including religious institutions, were auctioned off and that’s how a wealthy Hindu merchant came to possess a Mughal-era mosque. Lala Chunnamal bought Fatehpuri Masjid for Rs 19,000 in 1857 and sold it again to the British for 1,20,000 twenty years later, whereupon it was handed back to the Muslim community. Built at one end of Chandni Chowk with a gate facing the Red Fort, the mosque gets its name from its patron, Begum Fatehpuri, one of the wives of Emperor Shah Jahan. 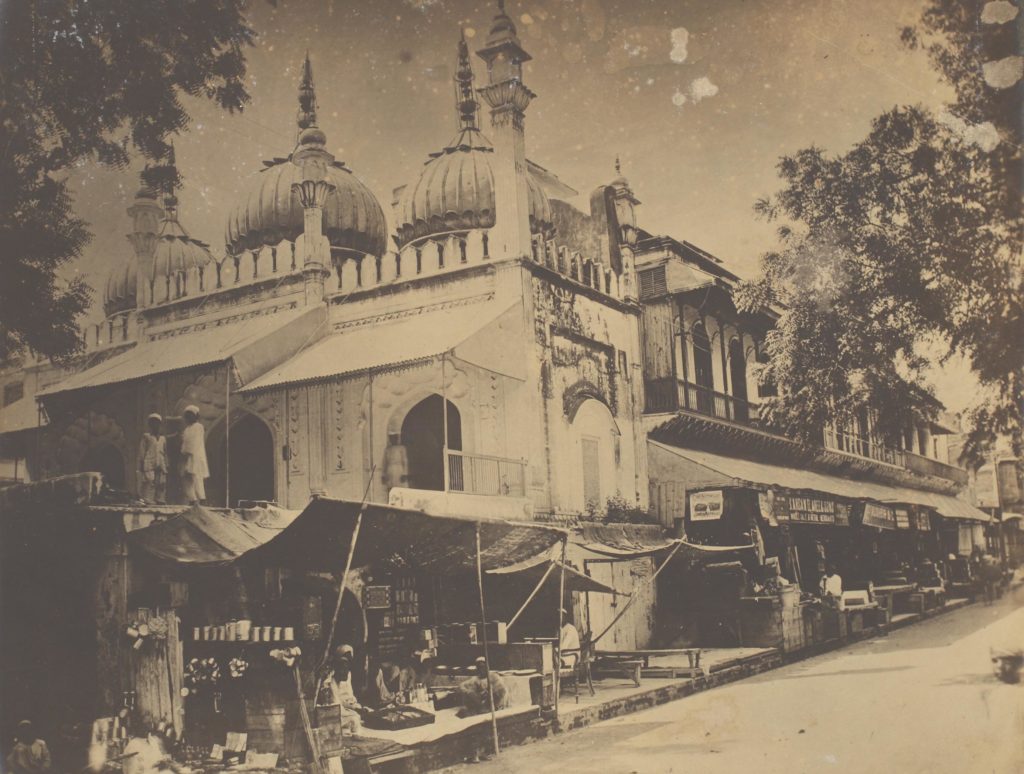 It started innocently enough. During the reign of the later Mughals, court nobles acquired a fair amount of clout and built many grand structures and tombs for themselves. Eg: Safdarjung’s Tomb. During the reign of Muhammad Shah, one such grandee named Roshan-ud-Daula Zafar Khan built a mosque in Chandni Chowk and had its domes and peaks covered in gilt so it would live up to its pretty name, Sunehri Masjid. But less than two decades later, this venue became the sight of a rather grim vigil. By 1739, Persian invader Nader Shah had made inroads into Delhi but the natives were not about to acquiesce to his rule as quietly as Mughal royalty had. They attacked and killed Persian soldiers in the streets and when news of this reached Nader Shah, he ordered a wholesale massacre of Delhi’s citizens, while he watched from the roof of the Sunehri Masjid. In his book, The Sword of Persia: Nader Shah, from Tribal Warrior to Conquering Tyrant, Michael Axworthy describes the scene: “He went to the roof of the mosque and stood by the golden domes, looking out over the houses, shops and roof of the Chandni Chowk district. He ordered that no one should be left alive in any part where any of his soldiers had been killed, and then drew his sword as a signal that the massacre should begin.” 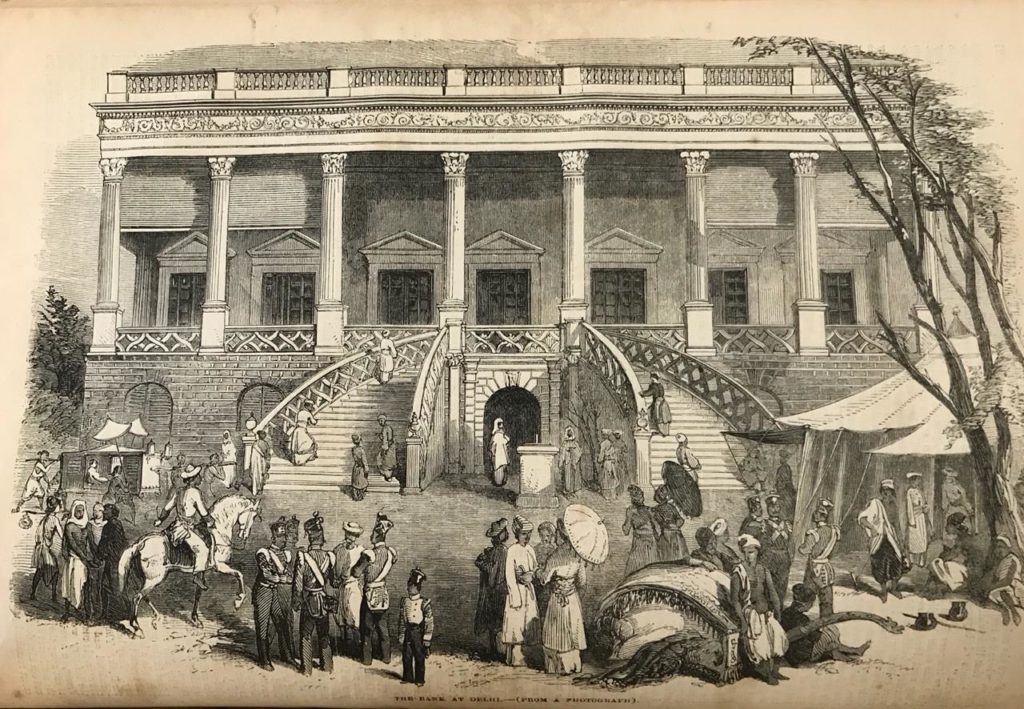 Like all intimidating women, Begum Samru too was once branded a witch. In the 18th-century, it was one way to explain the power emanating from this slight, pale Kashmiri nautch girl who commanded an army of deadly mercenaries and ruled a kingdom in present-day Uttar Pradesh. Farzana Zeb un-Nissa was a teenager eking out a living in one of Delhi’s red-light districts in the late-1760s when she met Walter Reinhardt Sombre aka Samru. She made a quick study and soon rose in the esteem of her partner’s army of renegade fighters. When Samru died, his Begum became the supreme commander and under her leadership, the army won decisive victories against the British and Sikhs. She also took over as the ruler of Sardhana, a kingdom awarded to her partner by Shah Alam II. Begum Samru’s haveli in Chandni Chowk was once a pleasure palace complete with fountains, gardens, classical Greek columns and dramatic, sweeping stairways. It’s a sadly reduced spectacle today. After the Begum’s death, the haveli was bought by Lala Bhagirath Mal whose family lived there till the early 1970s. From there the structure slid steadily into a state of disrepair. Most modern Delhiites wouldn’t know that their go-to destination for cheap electronics, Bhagirath Market, was once the fantastical abode of a queen.

The capital’s oldest Christian burial ground was named for a British war hero who died in an attempt to win the city back from Indian rebels. Brigadier-General John Nicholson was a veteran of the Anglo-Afghan and the Anglo-Sikh wars and during the Uprising of 1857, he went up against the soldiers who had seized control of Delhi. Nicholson was known for his ruthlessness towards Indian natives and capacity for violent rage. The event known as the Storming of Delhi would be his last chance to vent that aggression—he died from gunshot wounds only a few days later, at age 35. His grave is right at the entrance of the cemetery, which lies close to Kashmir Gate where this last fight took place. It is believed that this graveyard is haunted by the moans of the British officers and families buried here. The chief paranormal attraction is a headless soldier who wanders about this otherwise peaceful colonial landmark.

Perhaps time moved more slowly when clocks were public utilities subject to the vagaries of weather and trespassing pigeons. The 128-foot Ghantaghar in Chandni Chowk, originally named Northbrook Clock Tower after the then-Viceroy of India Thomas Northbrook, was one of the oldest clock towers in India. As it faced Delhi Town Hall on one side, this was also a popular site for protestors of all hues to gather and mobilise. Naturally, it played a role in the Indian freedom struggle and on August 15, 1947, the Union Jack that fluttered from its roof was taken down and replaced with the tricolour. Not long after, when a portion of the Clock Tower collapsed and killed a few locals, the structure was demolished and never rebuilt. All that remains today are photographs and engravings, like this one, made during the Delhi Durbar of 1911.